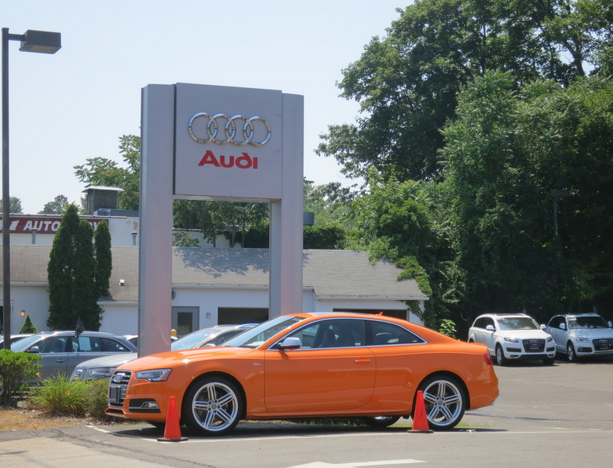 Update: This story has been updated to include a corrected last name of one of the neighbors who gave testimony at P&Z

Residential neighbors of the Audi dealership on West Putnam Ave spoke out during the Feb. 10 P&Z commission meeting. At issue was Country Realty Company’s application for changes including construction of a third parking tier and lighting at the facility.

“They propose to build this ugly structure in a stream bed, and I think it’s compounding a mistake to make it larger,” said Gerrit Argento of 84 Brookside Drive.

“There is something larger going on here,” Argento said. “Something that residents have the right to bring to the attention of the very powerful Planning and Zoning commission… Audi’s expansion will lower our quality of life and reduce the value of our property. If this proposal is approved, it will be rewarded for years of willful violations of residential protections including screening, lighting, traffic and test driving.”

The Brookside Drive neighbor said that P&Z should take into account the attitude and past behavior of the applicant. “The Audi manager told me the lights were not on all night, that they were shielded, and in compliance,” Argento said. “He was so careless in his attitude, he did not even realize he was wrong on all three counts, as his attorney, Thomas Heagney later admitted. These violations have been going on for years. The POCD states that Greenwich is a residential place — not an auto strip mall. It has not protected us.”

Mr. Argento recalled how neighbors have in the past mobilized, paid experts and fought to stop expansion of Mercedes, Lexus and a huge retirement complex proposed on West Putnam Ave. “And now we have to organize again to protect ourselves form Audi,” he said.

Neighbors who lamented the “dealer sprawl” on West Putnam, also voiced objection to car dealership from Audi, Miller Motorcars and Mercedes, who cause a hazard by crossing four lanes of traffic on West Putnam Ave on foot. 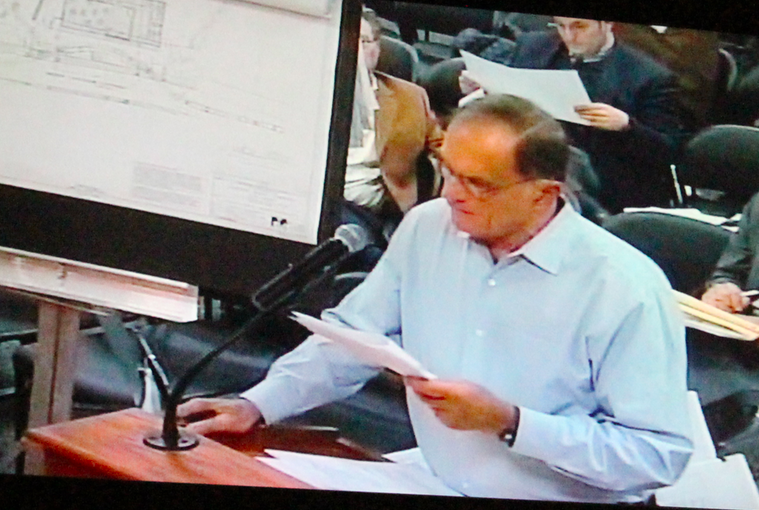 Neighbors including Gerrit Argento,  whose property is behind the Audi dealership on West Putnam Ave, spoke out at the Feb. 10 P&Z meeting.

Neighbors’ list of suggested conditions include a request for no mechanicals in the Audi parking structure and no car lifters installed at either Audi location. Also, to prevent pollution, there was a request that no oil spillage, solvents, paint to be exposed and carried away in Horseneck Brook, which, neighbors said floods in heavy rain.

Neighbors also requested replacing a chain link fence with “natural concealment” and ensuring that HVAC equipment not cause noise pollution. Another request was that car alarms not to be triggered, and if triggered, that they be immediately silenced. 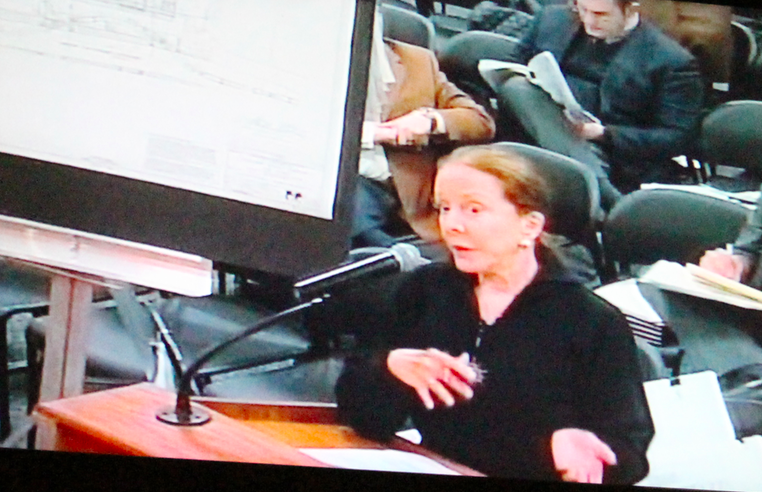 Kathryn Adams spoke at the Feb. 10 P&Z meeting about glare from the lights at Audi dealership, car alarms sounding, and lack of communication from the dealer with residential neighbors.

Kathryn Adams, also of 84 Brookside Drive, said the candle power of the lights at Audi were not in compliance. She said that despite having darkened shades in her bedroom, lights from Audi shine through. She described a lack of communication with Audi and her neighbors and a concern about water drainage.

Adams described her house as “an island” after heavy rains. “The sewer cover manhole comes off and you just see the sewage coming out of there,” she said. “And you see the garbage thrown in there. I’ve lived there since 2000, and it’s just not a nice way to treat your neighbors, and I just don’t see a culture change coming any time soon.”

Peter Quigley, who said he had served on the Dist 7 land use commission, also spoke out against the application. Mr. Quigley said that of all the projects he had testified about, the Audi project was the most serious. “You’re right in the most serious flooded area,” he said. “I can’t believe this application is in front of you.”

Mr. Quigley, who is also a member of the Harbor Management Commission said, “You guys spent 54 meetings, 1,100 hours presenting a document in which Greenwich does not want to be a regional center. We’ve seen so many applications involving neighbors not wanting these dealerships from expanding.”

“When you double the size of the impervious surface in this area, right smack in Horseneck Brook, what do you think you’re going to do to the flooding into Greenwich Harbor? Floods. It’s going to end up in the harbor. I’ve been asked to speak tonight to take this design in consideration for the impact it’s going to have. It’s impacting pipe capacity and the rate of runoff. Come on, folks!” – Peter Quigley

Attorney Heagney said the project would in fact decrease the impervious service because the design includes the addition of rain gardens. Insisting that the application had evolved and now included measures to address water quality:  “Sand filters, new catch basins and rain gardens would significantly improve the problem.”

“As for lights being left on all night, we’ve noted that the lights will go off at 7:00pm,” Heagney said.

Mrs. Alban pointed out that the lights have not been turned off at 7:00pm according to neighbors, and that another neighbor, Mr. Argento, had complained about his calls not being returned.

“I frankly don’t remember receiving any phone calls and I apologize,” Heagney said.

“You think they’d be on good behavior,” Mrs. Alban said of complaints about the dealership since Audi’s application came to life last summer.

Mr. Heagney reminded Mrs. Alban that Audi is in the GB zone and Audi’s use as a dealership is permitted.

“I’m talking about your height and size of the penthouse. You’re changing tact…There has been no communication. We have been on record to ask the car dealerships to dialogue with the neighbors,” Mrs. Alban said.

“We represent the citizens as well as the business owners. And they are telling us the lights are being left on,” Mrs. Alban said.

“We have agreed the lights will be shielded and turned off at 7:00pm when the dealership closes. That is enforceable by the town’s zoning enforcement officer,” Heagney insisted.

Mrs. Ramer noted that the ARC approval was not in accord with what Heagney’s client’s current lighting plan. She said that at the Sept. 3 meeting, the applicant proposed reducing lighting poles from 20 ft from the deck down to 12 ft from the deck, and no light on the building whatsoever.

MR. Heagney said there was no plan for lighting beyond the 12 ft lights on poles on the deck except for lights triggered by motion sensors. He said the lighting plan is available to neighbors to come to Town Hall to review.

Kathryn Adams said there is a piece of woods owned by the Greenwich Land Trust that comes right up to the cement wall owned by Audi. “But things grow there,” she said.

Mrs. DeLuca pointed out there are few evergreens in the wooded buffer owned by GLT, “You can see right through in the winter,” she said.

Mrs. Adams said in the summer when she has had cocktail parties outdoors, glare from lights at Audi lights cast glare onto her property.

Mr. Heller said to Mr. Heagney that his client deserved criticism for lack of communication and asked him to meet with neighbors and put the lighting plan in layman’s terms. Heagney agreed and said a contact number would be provided to neighbors.

At the end of the discussion, Mrs. Alban suggested leaving the application open. “As long as there are outstanding communication issues, we should leave it open. We’ve held the line with these dealerships…”

The commission agreed to keep the application open. “I want a report back that there has been a dialogue and that the lights are turned off at 7:00pm now,” Mrs. Alban said. “I don’t see that they’re suddenly going to turn into good neighbors after construction.”

Mrs. Alban said she was also concerned that details of the penthouse had been an afterthought. “I want to see it come back as fully compliant with our regulation.” 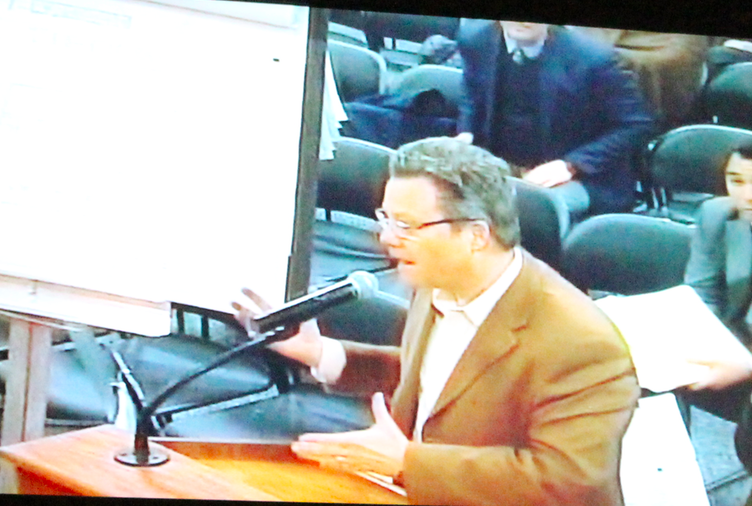 Chris Mackey, VP for New Country Motor Car Group, spoke at the Feb. 10 P&Z meeting at Greenwich Town Hall. Mackey said the Audi facility was formerly owned by Malcolm Pray and the outdated lighting would be replaced during proposed upgrades.

Chris Mackey, VP for New Country Motor Car Group, who had traveled from Lake George for the meeting, said he had exchanged texts with the Audi general manager. “He indicated to me that the lights at the back have been disconnected for months, that they are off now,” Mackey said. “These buildings are old. I don’t know when Malcolm Pray originally built them, but the electrical and lighting systems are aged,” Mackey continued.

Describing his company’s newer dealerships as having very sophisticated lighting systems that are control remotely, Mackey said their four facilities directors control heating and lighting on portable from anywhere.

Back in July, Mr. Heagney announced that Volkswagen would no longer going to be part of the dealer mix on West Putnam Ave. “The Volkswagen dealership is going to close next week,” he said just before the July 4th holiday, adding that Audi sales would remain housed on the north side of West Putnam Ave, and that service would be on the south side in the former Volkswagen location. Heagney explained to P&Z that every few years, dealerships are required to revamp themselves.

It was also noted that the Audi sales building, on north side of Putnam Ave, is located in a historic overlay because a historic post office is part of the site. 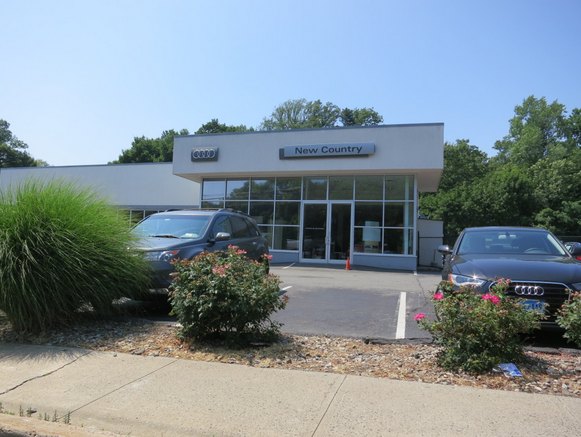 Audi sales building located on the north side of Putnam Ave at #181 West Putnam Ave., in Greenwich. Credit: Leslie Yager 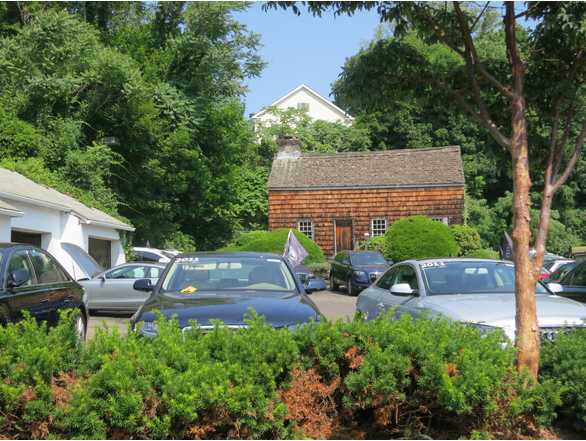