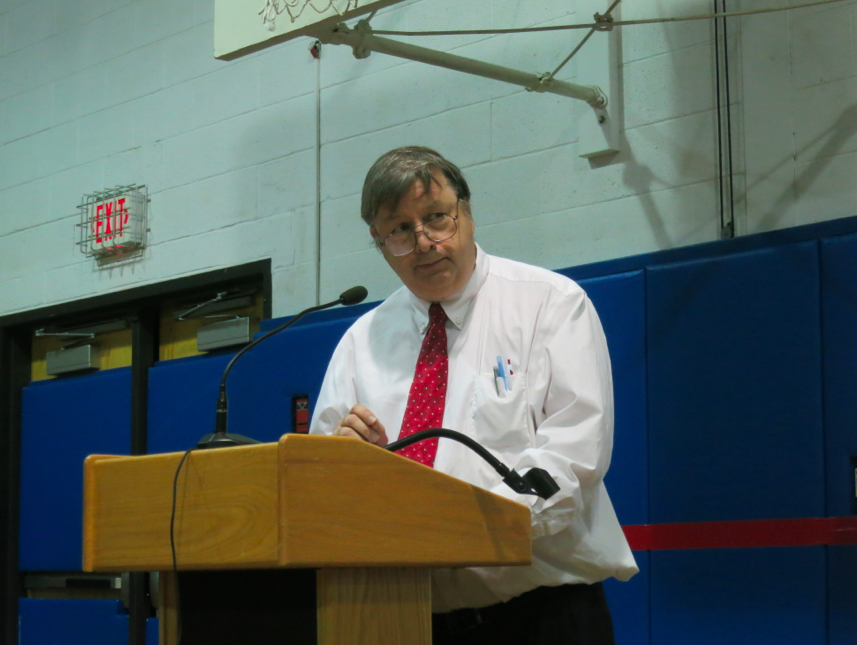 By Cort Wrotnowski of StopCommonCoreinCT StopCommonCoreinGreenwichCT. These comments were delivered during the public hearing portion of  the May 22, 2014 at Parkway School.

I have spent the last year and a half studying Common Core with every spare moment I could get. Too few parents in Greenwich are aware of the serious problems in Common Core and the associated testing regimen.

Manchester, New Hampshire is a city of 200,000 people. Last October, their school board voted to reject common core and write their own standards instead. (1). Same for Alton, NH, a small town there. Also, Bergen County, New Jersey; St. Tammany Parish, LA; Douglas County, CO; and Germantown, WI also rejected the mandate of common core (2). There are yet other towns, and Greenwich can do the same.

Indiana recently passed a bill rejecting Common Core. Missouri, Wyoning and Oklahoma are on the verge of doing the same (3). While a numer have also failed, there are still bills to reject common core pending in over 30 states. Unfortunately, Connecticut is not one of them. But we can do it if enough parents persist in the fight. It is a fight to keep your rights as parents to determine the course of your children’s education.

April 2013, The Republican Party passed a unanimous resolution calling for the rejection of Common Core. Two weeks ago, the Chicago Teacher’s Union unanimously voted to reject common core (5). The board of the New York State Teacher’s union passed a similar resolution several months ago (4). Last November, over 700 public school teachers in Stamford signed a petition condemning the conduct of the Stamford Board of Education in implementing Common Core. The CT commissioner of education, Stefan Pryor, nearly received a vote of no confidence from the association for school superintendents.

On the matter of standardized testing, the picture is even more stark for Common Core. Connecticut is in one testing consortium called SBAC. There is another one called PARCC. At least 17 states have pulled out of PARCC, refusing to participate in their test. Several states have also pulled out of SBAC.

Parents opting out their children from these tests is happening all over the country. In Connecticut, not so much, and in Greenwich even less so because parents have been intimidated and lied to about the laws relating to opting out.

So, I’m here tonight asking you to take the time to read and study in depth the internet links on the flyer which has been passed out. The main message is that all the selling points for Common Core are demonstrably false claims. False. None is a more galling example of lying-by-equivocation than the claim that Common Core makes your children “Career and College Ready.” The flyer has a link about one Jason Zimba. He was one of the main writers of the Common Core Standards. He admits in public testimony before the Commonwealth of Massachusetts that their definition of “college ready” is limited to non-selective community colleges. Any student who is a graduate of those Common Core standards and wants to go to a better college will need one to two years of remedial courses. Jason Zimba also admitted in testimony that Common Core math standards still leave American students at least one to two years behind their Asian counterparts. Common Core makes America less competitive and technology weaker.

Common Core literary standards are even worse. An article on WhatisCommonCore.wordpress.com (6) describes research showing that prior to the introduction of these standards, upwards of 45% of high school graduates still needed remediation for college English courses. In the states which adopted Common Core more quickly than others, it is being shown that some 65% of graduates require remediation for college English courses. Common Core is ruining public education and most definitely NOT making students ready for anything other than more remediation courses.

We must reject Common Core, and we can, despite what the board says. They are somehow invested in Common Core. They have lost all objectivity, and are incapable of recognizing how damaging Common Core is to your children’s education. I will be standing in the back of the room waiting for those who will get in this fight to reject the mediocrity that is Common Core and restore Greenwich’s public education system to the level where it belongs (7). Thank you for listening.

(6)What is Common Core