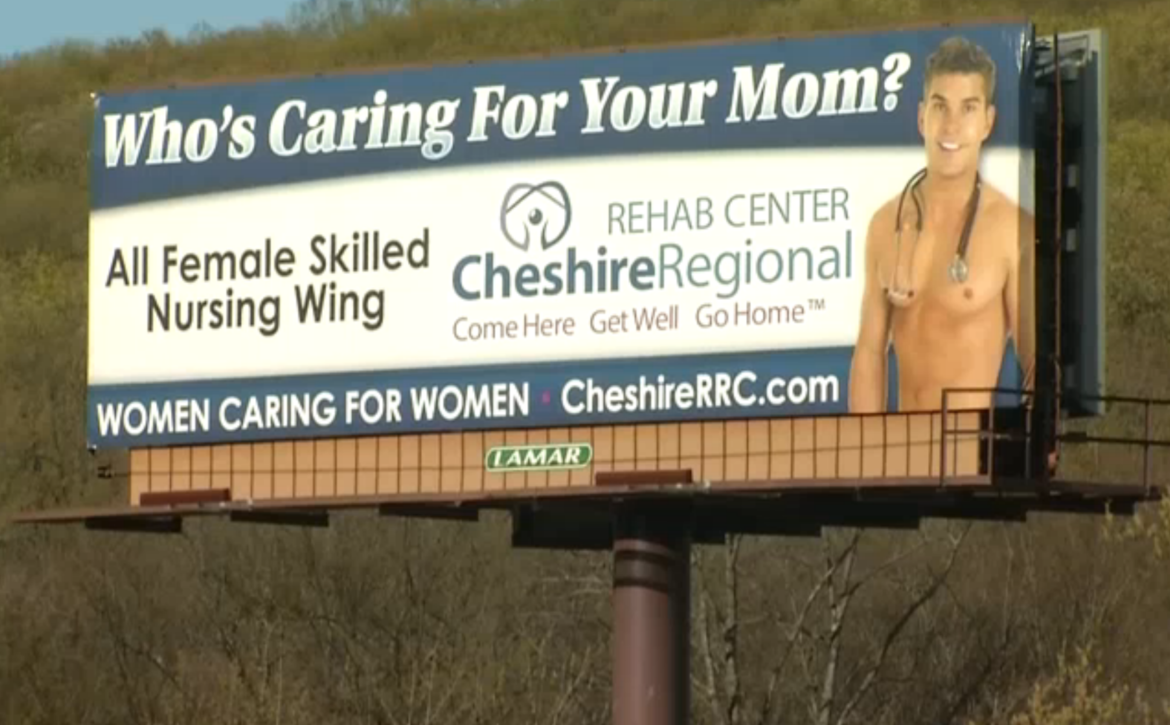 By now many have seen or heard of the now infamous I-84 billboard that was put out during National Nurses’ Month in Connecticut by a Cheshire nursing and rehabilitation center in New Haven County as a marketing gimmick. It has been decried in tweets, on Facebook, on televised media and in print. An immediate response by the Connecticut Nurses Association has sparked its imminent removal.

I am a member of the Executive Board of the Connecticut Nurses’ Association and have proudly been a practicing Registered Nurse now for nearly 48 years. Having recently seen the billboard on I-84 depicting a bare-chested male with a stethoscope around his neck, and the slogan, “Whose Caring For Your Mom?” I must say that I was outraged on multiple levels.

Would one post such a picture and slogan as a means of casting aspersions on male physicians or EMS workers who care for female patients? The not-so-subtle implication is that a male nurse is not trustworthy.

The “cheesecake” image, whether depicting a male or a female, is demeaning and insulting to nurses of both genders and devalues the extremely high professional scope of practice and clinical and ethical standards to which all nurses are held equally.

Members of the nursing profession are recognized year after year in the National Gallop Polls as THE most trustworthy, respected and ethical of all professionals. That billboard is a biased abomination that needs to be removed. It is blatantly sexist and offensive, and I question the judgement of whoever within that facility’s hierarchy allowed that to be posted. The nursing profession has long embraced the value of all kinds of diversity in its workforce and our nursing brothers are as ethical, trustworthy and skilled as our female nurses. We cannot stand silently by while such vile rhetoric and sleazy images depicting our most trusted professionals is on display on public billboards along our roadways or anywhere else!

Not only am I a nurse who served 13 years as a Director of Nurses in a consistent 5-star Nursing home, but I’m also a Connecticut-licensed nursing home administrator since the 1980s.

I can assure the public that the gender of the nurse plays no role what-so-ever in the quality of care delivered in a facility. The issue of how well “Mom” is being cared for revolves not around the gender of the nurse, but the caliber and standards of care that the organization facilitates through their policies, budgets, the culture of care they create for their workforce, their staffing patterns and their daily care oversight.

Before placing anyone in any facility I would, and do, urge the public to ask about quality care measures, and how they are being monitored and financially supported by the facility’s supervisors, administration, and Board or corporate level managers.

* Is staffing adequate on all shifts to allow staff to provide quality of care in accordance with Federal and State regulations?

* Do care planning, care coordination and discharge planning occur in accordance with State and federal guidelines, and result in good observable outcome measures?

* Check the facility’s State/Medicare surveys, (medicare.gov) and do your own comparison shopping.

* What has the facility’s “star”/quality rating been over the last few years?

* Does the facility provide state-of-the-art equipment, supplies, orientation programs and staff development programming for their staff to foster the delivery of quality care?

* How does the facility rate in the areas of key indicators of quality care?

* Rates of impaction (even one is a “sentinel event”)

* Quality of life and safety violations

* Complaints made and problem resolution What the public will never find amongst indicators of quality care is the gender of the highly skilled, trustworthy and ethical nursing professionals providing that care regardless of whether they are doctors, nurses, or from any other profession!