The role of the press is critical to democracy. It not only acts as a watchdog, but it educates and facilitates informed citizen participation in the political process. It also offers the public the opportunity to be heard on important topics of the day through letters to the editor. Not so with The Sentinel.

While The Sentinel is known as a very conservative leaning publication, even we were surprised by its reaction when we submitted a letter to the editor taking issue with one of its pieces. We decided to chronicle this experience, which we’ve set forth below, not only to shine a light on this particular paper’s bias, but also as a cautionary tale about the dangers of press censorship of submissions by the public that take issue with what is printed.

Imagine if papers like The Sentinel were all that existed. The marked up version of our letter to the editor, turning our words into something else entirely, is what that world would look like.

Thankfully in Greenwich there are papers that include all views (and real facts) from the Town. It is unfortunate that, at least at this point in time, The Sentinel is not among them Here is what happened:

On February 15, The Sentinel published a piece titled, “Free Speech at Greenwich Town Hall Under Fire,” relating to the use of that space by Carl Higbie’s media company. Since the record demonstrates that what was under fire was not in fact free speech at all, we took issue with the piece and sent a letter to the editor.

We then received the following e-mail setting forth a rewrite of our letter – their word choices in red and their attacks on our submission/requests for us to rewrite in yellow. We cannot stress how unprecedented this reaction is to a letter to the editor. It simply does not happen. Serious newspapers solicit and print uncensored views of the public. 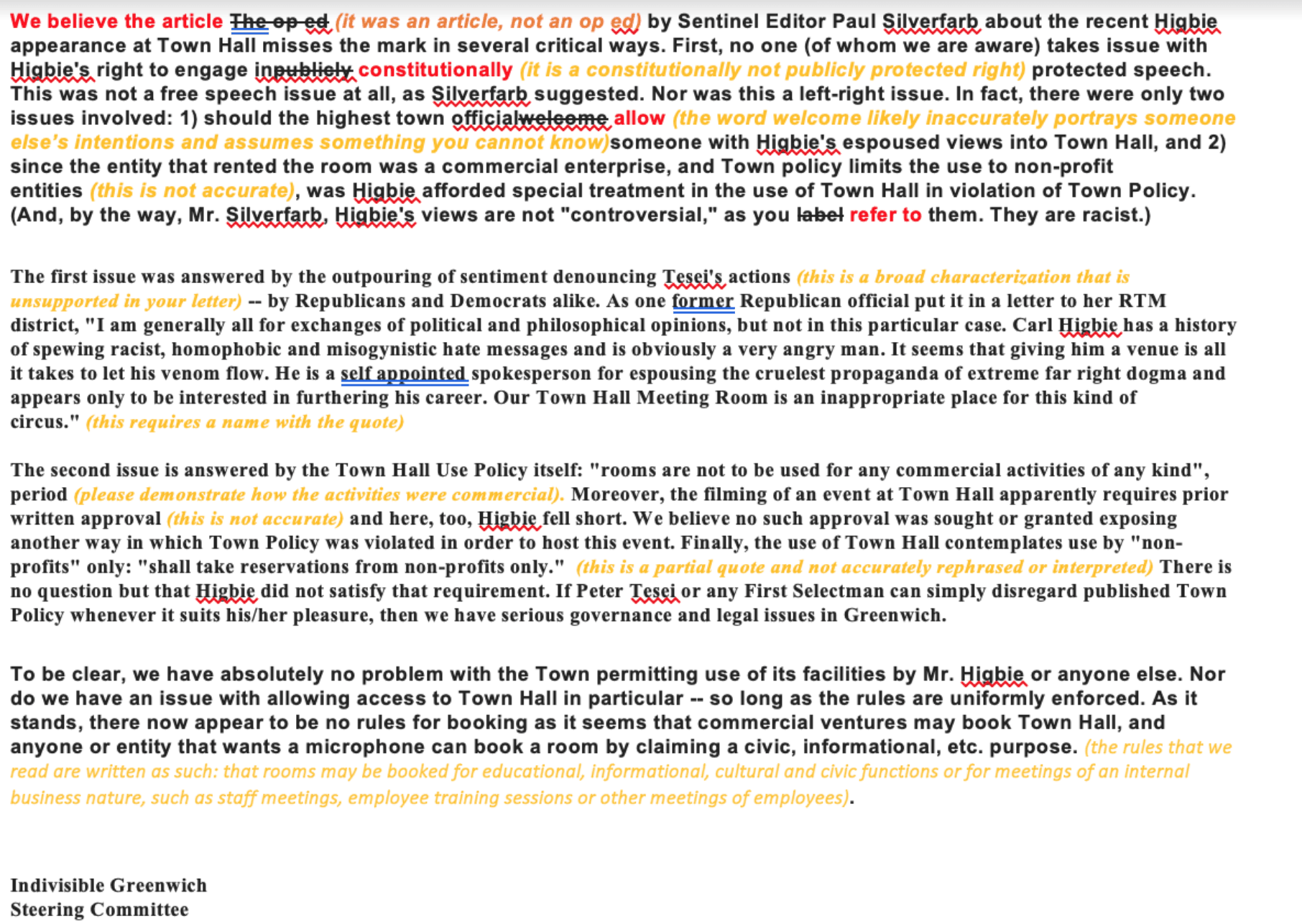 Since it was The Sentinel that got the underlying facts wrong, and because we felt strongly about the issue, we responded in detail as follows:

We are both surprised and disturbed by the contents of your e-mail. None of us has ever had a newspaper ever ask us to change the wording of a letter to the editor. Indeed, your e-mail is particularly troubling since it attempts not only to reframe our points into words of your choosing – words that in our view are wholly inaccurate and misleading, but asserts as facts statements that are demonstrably false. You also seem unfamiliar with publicly available information that a reporter could easily discover as we have such as, for example, that 1) the entity reserving Town Hall and the event itself were commercial in nature and in express violation of the policy regarding use of Town Hall, (Click here for town hall meeting facility policy) and 2) a film license was, in fact, required and to the best of our knowledge as no license was produced in response to our FOIA request, none was obtained, another clear violation. Please consider the following:

“The Town Hall makes its meeting rooms available to the public under the terms of this policy.

Reservations – All reservations are made on a first come, first serve basis. Administrative Services shall take reservations from non-profit organizations only up to a year in advance for the following rooms: Cone, Gisborne, Mazza and Town Hall Meeting Room….

“The Town Hall meeting rooms shall be available to local non-profit organizations subject to the following conditions:”

We note further that there is no provision that states that others may apply. All language is geared to organizations/non-profits. Indeed, the application itself contains a place where the Town Hall employee booking the room must check off two (2) boxes, one confirming that proof of non-profit status has been submitted, and the second that proof of insurance has been provided. Is it your position that insurance is also optional?

We believe the document on its face contemplates use solely by non-profits. You are free to make a different argument, but the language of the policy does not permit you to assert that we are incorrect. 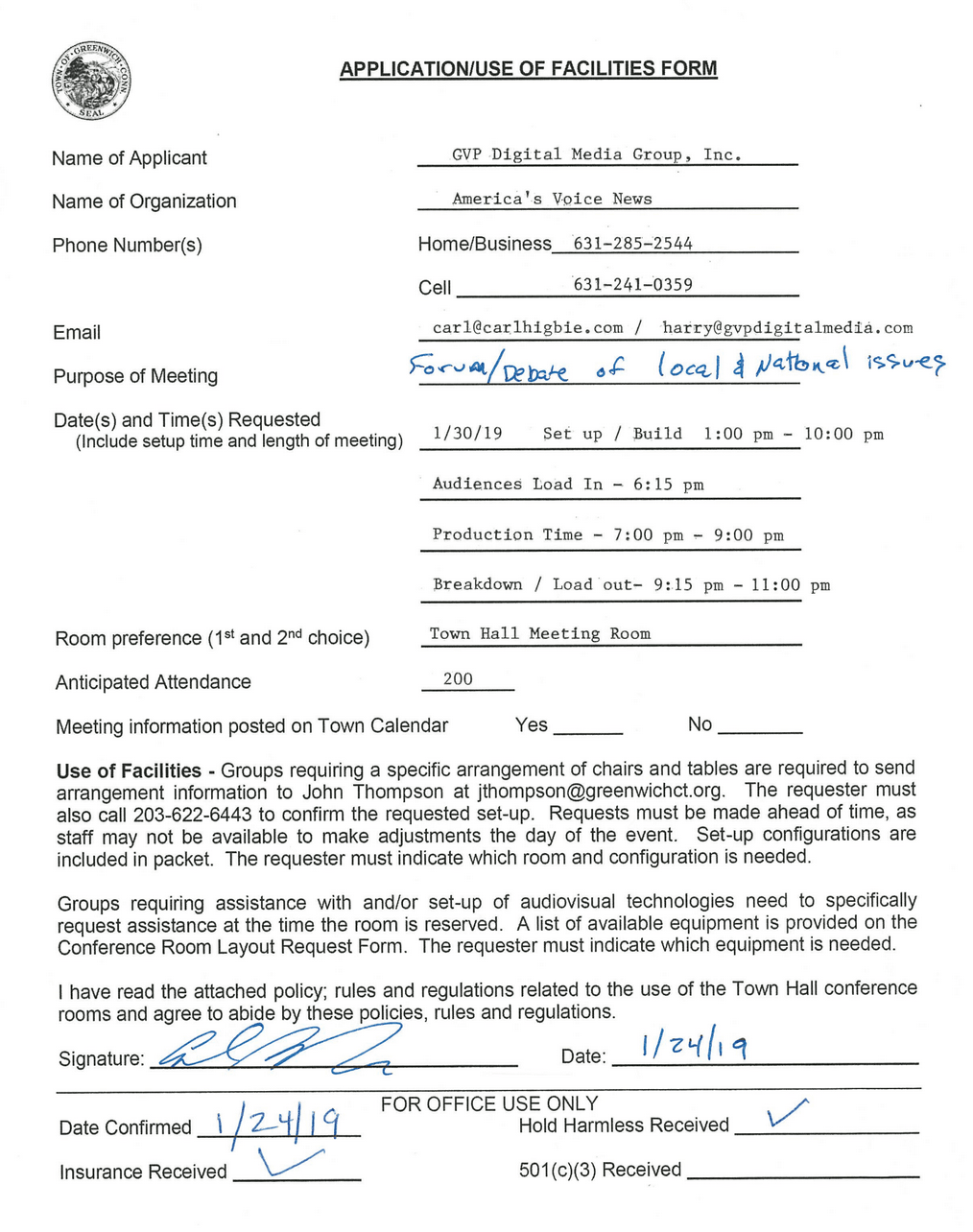 “Town Hall meeting rooms are not to be used for commercial or pecuniary activities of any kind, including fund raising.”

“Meeting Facilities of the Town Hall may not be used to solicit business from or conduct business with members of the public, such as, for example, buying or selling, marketing commercial products or services to the public, gambling, or the exchange of money.”

Yet that is precisely what Mr. Higbie and his venture used it for. Here is the “proof” you requested: CORRESPONDENCE GVP DIGITAL MEDIA GROUP INC.

The application for use was filled out by GVP Digital Media Group, Inc. This is the entity that actually utilized the room.

The event was promoted by America’s Voice News.com and live-streamed by that online network using several cameras set up in the room for that purpose. The event continues to be available on that website.

Mr. Higbie attempts to sell his book through Amazon on that website.

Most dispositively, Mr. Higbie’s/America’s Voice News/GVP Digital Media Group, Inc. showed paid advertising during the event in question. Please see the .mov file attached to this e-mail. It plainly shows that the Town Hall event was being broadcast live (see left pane) at the time that a commercial was inserted into the stream.

There can be no legitimate question that a) this use was commercial, and b) the use violated Town Policy.

For the reasons stated, we do not believe that it is appropriate to change any of the words in our letter. We are prepared to adopt your characterization of the underlying piece as an article rather than an op-ed if that makes a difference to its publication.

Please let us know your intention as we contemplate publication elsewhere.