Letter to the editor submitted By Ryan Fazio, Greenwich

Tuesday’s municipal elections will be the most important in Greenwich in a long time. Without an incumbent running for First Selectman, current split control of town government, and a competitive electoral landscape, there is a lot at stake.

Democrats running, including First Selectman candidate Jill Oberlander, propose a significant departure in some ways from how the town has operated for generations. She and other

Democrats favor lots of new government spending and the introduction of more long-term debt to finance it. On the other hand, Republicans like First Selectman candidate Fred Camillo propose fidelity to past fiscal prudence and reform on the edges to improve the town. The evidence suggests Camillo, for whose campaign I have volunteered, and other Republican candidates offer the superior alternative for our town. There are at least four reasons that Oberlander and Democrats’ plans will suppress your property values and harm our local economy.

First, Democrats would spend recklessly. Under Republican government, Greenwich has more than adequately funded its governmental responsibilities. According to Board of Estimate and Taxation members, every significant capital project proposed by the Board of Education has been funded by the Town over the last 50 years. Over the last 10, the Town has spent half a billion dollars on capital projects for our schools. In recent history it has built entirely new schools at Hamilton Avenue, Glenville, and New Lebanon. It rebuilt and renovated other schools.

Greenwich Public Schools are very good and well-funded overall as is. The Town spends the second-most per pupil of any municipality in Fairfield County at over $21,000, according to the state Department of Education. That’s almost double the national average of between $11,000 and $12,000. If there is a problem with spending in our schools, it’s not that the taxpayer isn’t doing enough. 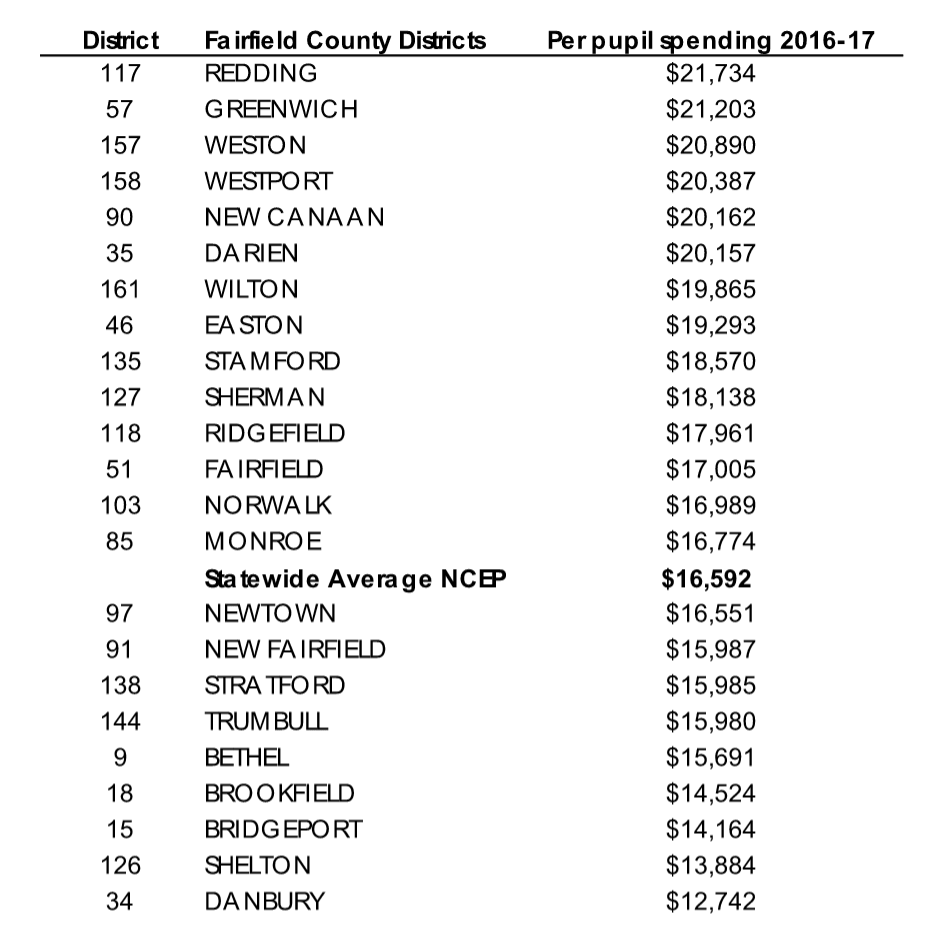 Second, Democrats’ plans for long-term debt and significant new spending would cause Greenwich’s low property taxes to increase substantially. Axiomatically, spending is taxation. Every dollar spent must be raised in current or future revenue. Long-term debt to finance lots of new near-term projects will mean future residents will need to increase taxes substantially or cut vital services. In the words of Fred Camillo, “how selfish” that the next generation would not get a say but inherit the costs of Democrats’ decisions.

Around the state, higher municipal debt loads are clearly linked to higher taxes. The municipality with the highest debt relative to its grand list by far, 17 percent, is also the one with the highest property taxes by far, 74 mills. Hartford used to be the richest city in America, as Camillo often notes, but squandered its wealth and success over generations due to excessive borrowing, spending, among other malfeasance. Long-term debt permits imprudence by politicians that metastasizes.

Even in lower Fairfield County, towns that have incurred much higher debt burdens have passed the bill directly to taxpayers. Six similar towns in our area that incur 1.5 percent or higher debt relative to their total grand list all impose mill rates of 25 or higher, according to the state Office of Policy and Management. Prudent towns like Greenwich, Darien, and Westport with
debt levels below 1 percent maintain mill rates in the teens or lower. Greenwich is the lowest for both. It should be kept that way. 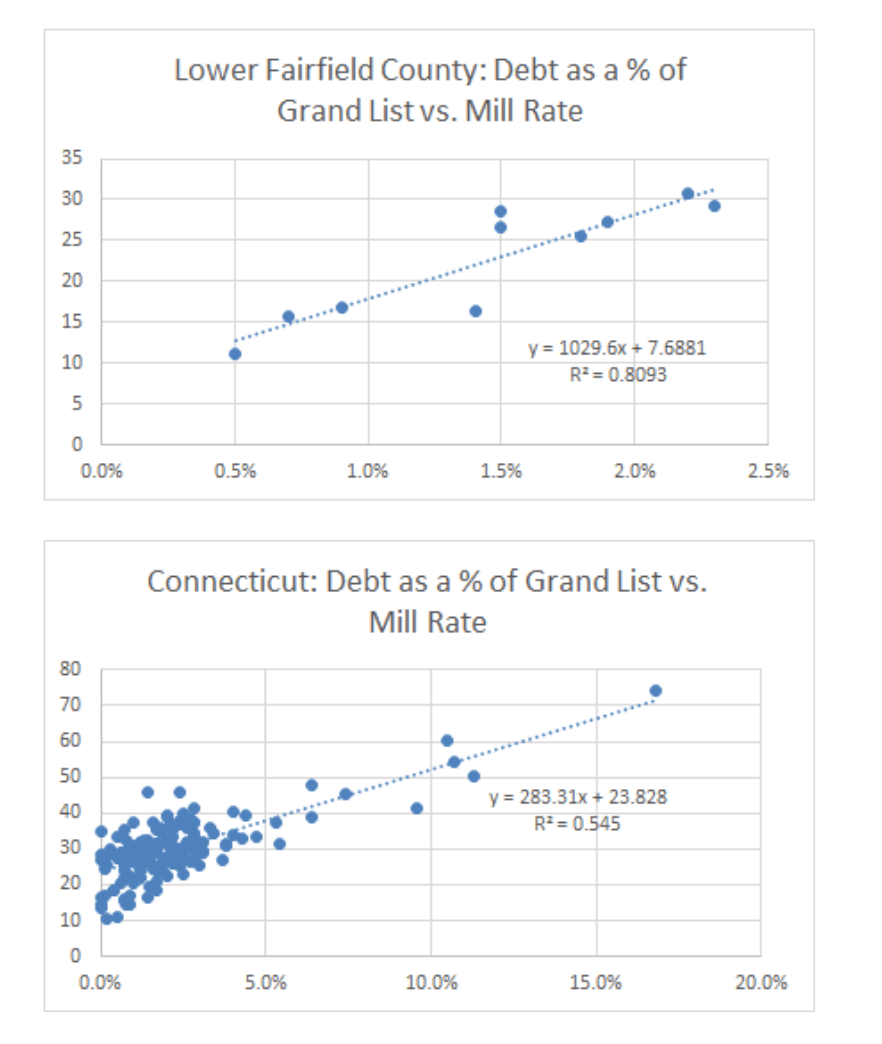 Third, higher property taxes caused by more debt and spending will suppress home values and depress the local economy. When you tax something, you get less of it. When you impose a higher tax liability on all property in town in perpetuity, you significantly decrease their present value.

Among the ten towns in lower Fairfield County like Greenwich, the overall level of property taxes has a strong link to changes in home values. For every additional five mills in property taxes, home values suffered an additional 2.5 percent decrease in our area from 2013 to 2017 alone, according to data published by the Hartford Courant. The negative relationship persists going back before the recession. If Democrats increase debt levels and taxes, your home equity will suffer. 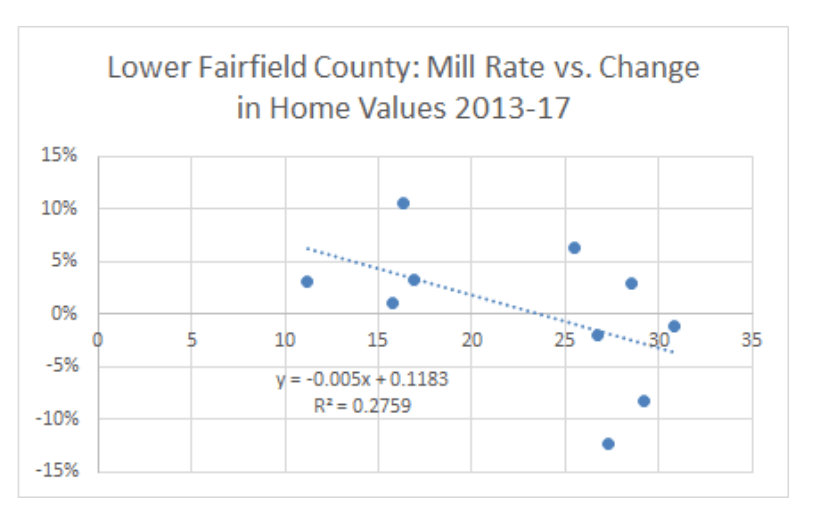 Fourth, Democrats lack an alternative plan to stimulate the local economy and support property values like Fred Camillo and the Republicans. Camillo will improve social services and town assets by leveraging Greenwich’s robust charity and volunteer sector for resources instead of taxing or borrowing more. That means more public-private partnerships, including a requirement that every appropriate capital project be proposed with an alternative for a public-private partnership.

Camillo will also revitalize our downtown district to make Greenwich a more vibrant and desirable destination. That includes repurposing the area utilized only for parking near Greenwich Harbor for a new waterfront district, connected to Greenwich Avenue, with shops and restaurants facing the water and a public-access park.

Regardless of other noise or fleeting controversy, the material issues of local government are what matter in Tuesday’s election. Democrats have made it clear for the public record that they will make a departure in many ways from how the town has been governed, thereby risking that Greenwich become more like failed municipalities across Connecticut. Republicans will preserve the basic governing paradigm of the town and improve it on the margins. All the evidence says the latter is the right way to protect Greenwich and move it forward.

Ryan Fazio is a Greenwich native. He works in commodities trading, volunteers at local schools, writes about politics, and tweets @ryanfazio.

NOTE: This letter was submitted in time for the Oct 29 deadline at 5pm.