At the initial appointment, doctors thought she had a shellfish allergy. Greenwich resident Maura Paris, a baker and chef for 20 years, recounted what she told her doctor after reacting to a meal.

“The hives happen after I eat shrimp,” she recalled telling her doctor, tearfully. “I had a meal of red meat, spinach, and shrimp last night and I have hives all over my body. It’s never been a problem before. And every time I’ve eaten shellfish in the past couple weeks, I’ve been throwing up, my throat swells up so I can hardly breathe… I barely feel like myself anymore!”

Allergy tests were inconclusive. Ms Paris had no reaction to shellfish during the tests. Nor did she react to milk or wheat. In fact the tests revealed no allergies.

Following the doctor’s orders, she decided to stop eating seafood. But, after a week she nearly went into anaphylactic shock. It wasn’t until a doctor asked about exposure to ticks nearly six weeks after the initial reaction, a seemingly random question at the time, that led to an answer about her actual allergy.

“Have you eaten any steak or pork recently?” the doctor asked her. As she realized she had eaten red meat before every allergic reaction. This was a game changer.

Mammalian Tick Disease, or alpha-gal, is a condition caused by a bite from the Lone star tick, which is so small that often people don’t spot it. When attached to a victim for an extended period of time, it can lead to a meat allergy. This, in turn will result in a lack of resistance to chemicals in meat.

Meat including steak, pork, and venison, and in severe cases, animal byproducts like milk and cheese, are all possible triggers of the allergic reaction. 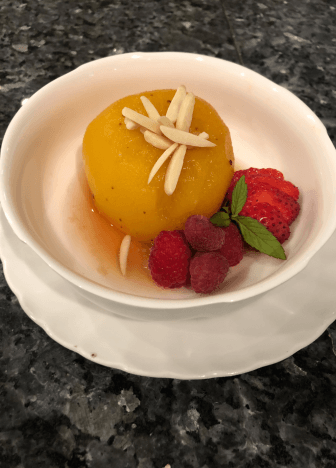 When Paris was diagnosed nine years ago there was little information available about the disease. A Google search revealed little.

Five websites popped up, with only two of them helpful. To this day, there are more relevant articles, but Paris said few doctors have heard of the disease.

“This is terrifying, considering many lives are taken by the serious reactions many individuals have suddenly,” she said.

Not only is it immensely terrifying to be allergic to such a significant part of the food world, but since Paris is a chef it presents more of a challenge.

Recently taking up a career as a personal chef for a family, preparing dinner every night.  Her kitchen is filled with cookbooks and interesting smells. Her dream, since she was a child, has always been to cook and make others happy through food.

Because of an abusive relationship that left her unable to pursue her career in college, she is now succeeding without the degree. However, with the diagnosis of Mammalian Tick Disease many years later that has not grown any less severe, she has stayed strong and followed her dreams. 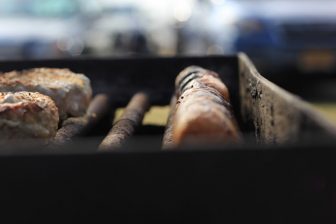 Despite not being able to eat hamburgers or hot dogs without severe allergic reactions, Maura Paris cooks them to perfection for a barbecue at the beach. Photo: Jordan Paris

“My grandmother greatly influenced why I pursue cooking to this day,” she said, while stirring couscous in a deep dish on the stove.

She makes everything from mousse to peanut butter and jelly sandwiches for her sons.

“Despite it being hard to succeed as a chef throughout the years, I’ve worked many places that all include some aspect of the career I love,” Paris said. “At Montpellier in Virginia, I worked behind the counter in such a historical place, meeting many people I loved. I work in Tarrytown to this day alongside the family I work with, catering for many different events. I’ve cooked for up to 1,000 people before.” 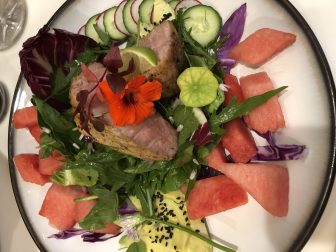 She commutes up to three hours a day by car just to make it to her jobs in New York and Westport, succeeding every night, eliciting many smiles among those who taste her food.

Many will know the dishes she creates, but few will know her secret behind that perfectly cooked steak: she will never be able to take a taste without risking her life.

Jordan Paris is a member of the Greenwich High School class of 2020. He is in Innovation Lab and leads his Gay-Straight Alliance.