Stamford Human Resources Dept. announced the results of an investigation of the Animal Care and Control Center, which began on April 18.

A statement from Stamford Mayor Martin’s office said the investigation began after the City received allegations that the facility was adopting out dogs without informing recipients of the dogs’ history of biting and aggressive behavior.

According to the statement, there were allegations that the adoptions resulted in injuries to several people.

Additionally, according to the statement, the City received complaints that the facility failed to appropriately respond after receiving dog bite complaints from residents.

The investigation has resulted in the termination of employment of Laurie Hollywood, Animal Control Manager. An “Animal Control Center Task Force” has been formed to review the policies of the Center and work to find and recommend potential sites for a new facility, a cinder block building built in the early 1960s. 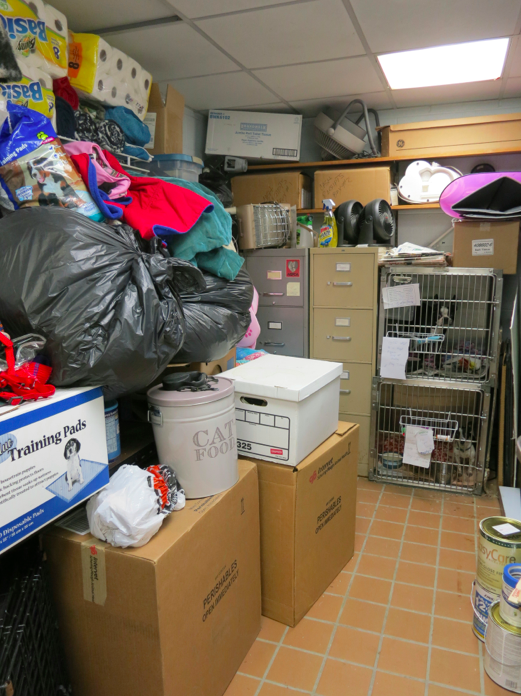 In a photo taken in 2013, a crowded closet at Stamford Animal Care and Control. Bursting with donated supplies, the closet also housed files and dogs. Credit: Leslie Yager 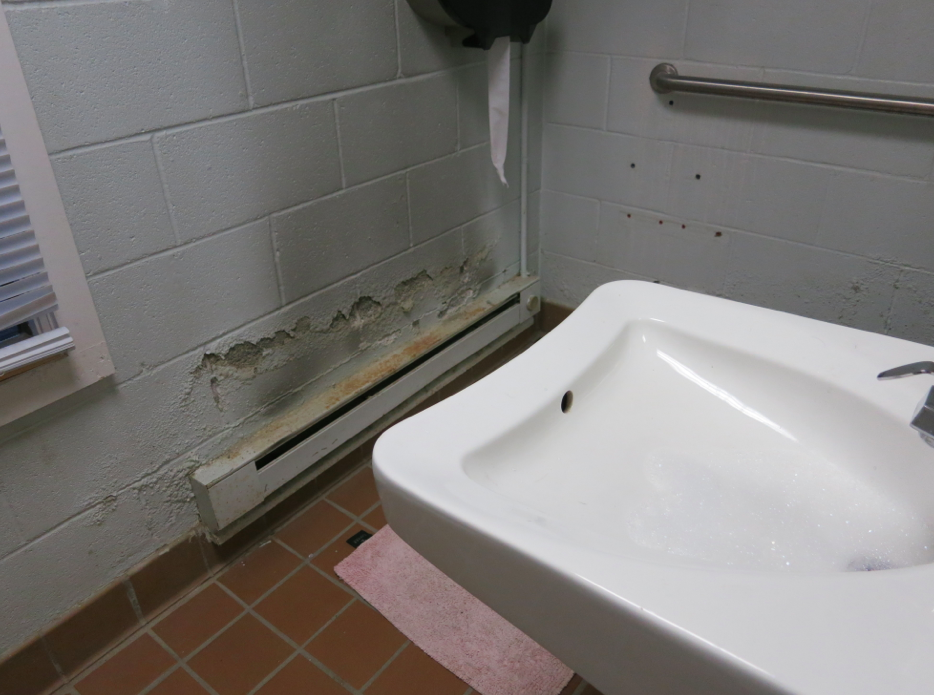 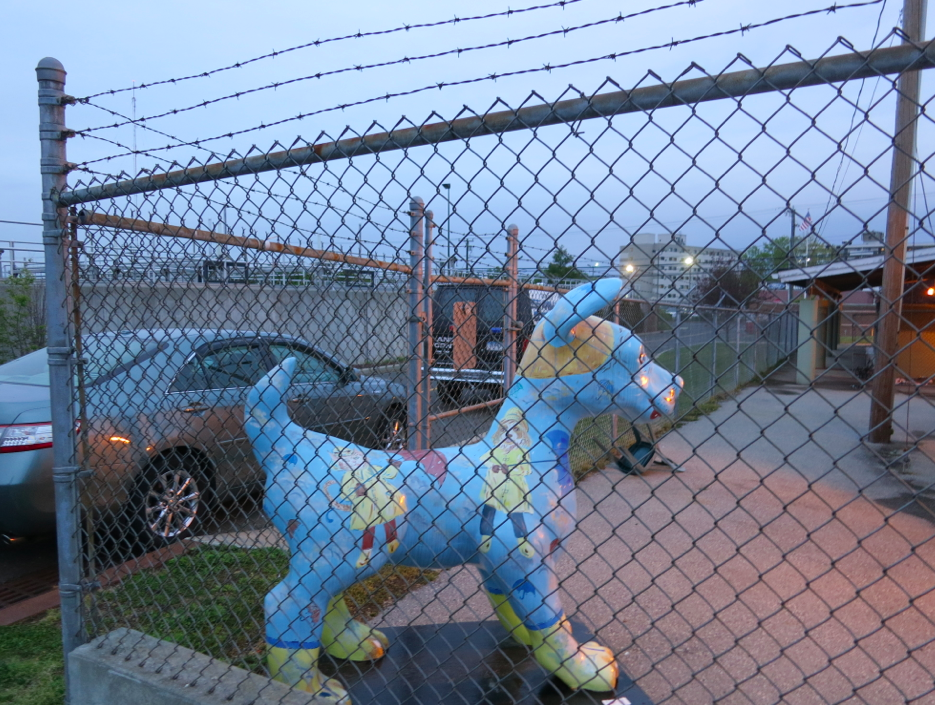 The building that houses Animal Care & Control, located at 201 Magee Ave, is located next to the waste water treatment plant for the City. The building is in poor condition.

A tour of the building in 2013 revealed damage caused by leaks, supplies bursting out of closets that also housed dogs. After a longstanding Stamford Animal Shelter capital campaign spearheaded by OPIN (Outreach to Pets in Need) the non-profit volunteer group affiliated with Animal Care & Control, collected total of $34,000 toward a goal of $1.5million.

According to the release from the Mayor’s office, the Stamford Police Department is continuing an investigation and “thus certain details will continue to be withheld.”

1. Several people were bitten and injured, including one who was seriously injured and treated at the hospital, from dogs adopted out from the Animal Control Center. In violation of City policy dog owners were not given information about the dogs’ prior history of biting and aggressive behavior.  Despite two prior written warnings from the State, the Animal Control Manager adopted out dogs with a history of biting.

3. The Animal Control Manager caused a false official City record to be created to cover up the adopting out of a dog that had a documented history of biting.

• In violation of City policy, the Animal Control Manager sent volunteers to residents’ homes, without informing residents of their volunteer status or seeking permission from her supervisor.

• The Animal Control Manager practiced veterinary medicine without having a valid license, was investigated by the State of Connecticut Department of Public Health, and as a result entered into a cease and desist order with the State.

• The history of dogs at the Center was misrepresented to the public, including in published communications.

April 15 – April 17, 2014 – The City of Stamford Human Resources Department, Director of Public Safety, and Chief of Police received multiple complaints regarding the Animal Control Center and the facility’s operations.

May 2, 2014– Animal Control Manager was placed on administrative leave. 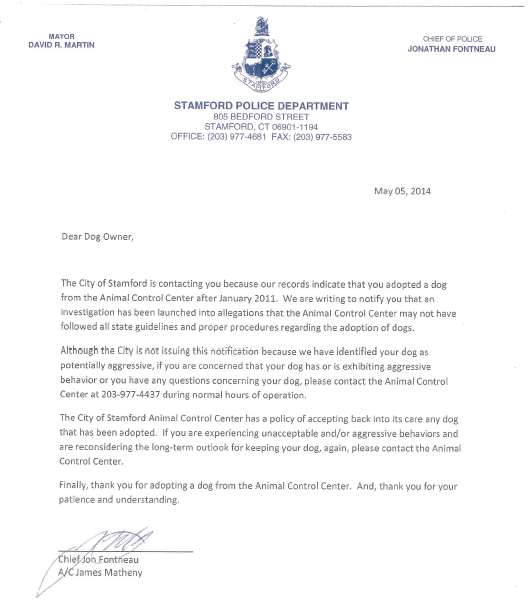 May 6, 2014 –Police Department sent letters to all individuals and organizations who had adopted dogs from the Animal Control Center since January 2011. In addition, calls were made to dog owners who the Police Department identified as owning dogs whose history indicated potentially aggressive behavior. One dog was surrendered to the Animal Control Center.

June 17, 2014 – Human Resources Investigation concluded with the recommendation that the Chief of Police terminate the employment of the Animal Control Manager. In addition, the Mayor established a task force to address the policies and procedures of the Animal Control Facility moving forward.

NOTE: The names of bite victims are not being released at this time. Dog names have been replaced with pseudonyms in order to protect the identity of the victims.

• Owner #1 brought in Alpha, an 84 lb mixed breed dog previously adopted from the Animal Control Center, because the dog demonstrated aggressive behavior and bit one person.

–   Owner #1 stated on the Dog Information Sheet, completed at the time of surrender, that the dog was returned because of biting.

• After being returned to the Center by Owner #1, despite a documented history of biting, the dog was advertised to the public in a flyer as “…harmless in his play,” and “The good news is we know Alpha did SO well in a home environment and should transition very easily back to a home life style.”

• Alpha was adopted out to Owner #2. In violation of City policy, the Adoption Contract for Alpha did not state Alpha’s biting incident or aggressive behavior.

• Owner #2 called Animal Control shortly after adoption to report bites of multiple individuals, one of which was serious and required hospital treatment.

• Owner #1 surrendered Beta to the Animal Control Center because the dog bit the owner’s child.

• In violation of City policy, the Animal Control Manager completed paperwork so that Owner #2 could adopt Beta and did not mention the fact that Beta had bitten a child.

• After the second attack, Beta attempted to bite the face of Owner #2’s child. Beta was surrendered to the Center. In violation of City policy, the Animal Control Manager did not notate the biting incidents on the surrender form.

• Beta was adopted out to Owner #3. The Animal Control Manager completed paperwork for Owner #3 to adopt Beta. In violation of City policy, there was no indication on the Adoption Contract that Beta had a history of biting.

• The Animal Control Manager adopted out Gamma to Owner #1. In violation of City policy, the Adoption Contract did not mention the biting incident. (Owner #1 was aware, however, that Gamma had bitten the officers.)

• A volunteer at the Center adopted out Gamma to Owner #2. In violation of City policy, the Adoption Contract Form did not state Gamma’s previous biting incidents. (Owner #2 did have knowledge of the police attack, but not the second attack.)

• Police Department in April 2014 was called to a Stamford resident’s home regarding a dog attack. The complainant called because the complainant was unhappy with City Animal Control’s handling of an ongoing problem with the dogs of a nearby resident, Resident #1.

• Resident #1 had several dogs that attacked residents and other dogs on multiple occasions over a period of several months. These repeated attacks resulted in:

– Injuries to multiple residents who were attacked by Resident #1’s dogs.

– Veterinary Hospital attention was given to animal wounds incurred after attacks from Resident #1’s dogs.

– A restraining order placed on one of the dogs.

– A veterinarian submitting a complaint to State officials. The State subsequently met with the Animal Control Manager and issued a verbal warning to her about the need to address the aggressive dogs.

• In violation of the duties of an Animal Control Manager, State directive, and City policy, the Manager failed to address the situation despite repeated complaints and requests from multiple individuals.

On two prior occasions, the State Bureau of Regulation and Inspection advised Animal Control Manager not to adopt out aggressive dogs.

• In February 2008, the State Bureau of Regulation and Inspection sent a letter to the Stamford Animal Control Manager denying the Manager’s appeal of a restraining order placed on one of the dogs at the Center (which had a history of biting) that the Manager wanted to adopt out.

• The Assistant Bureau Director concluded his letter by stating “The Department of Agriculture does not support Animal Control Officers knowingly placing dogs with a documented history of aggression back into contact with the public. This action could result in the municipality assuming liability should the dog become aggressive and bite again. While everyone in the field of Animal Control should do what can be done to better the lives of animals, the first responsibility of all Animal Control Officers is to the safety of the public.”

• The State Animal Control Officer added “The City of Stamford had no obligation to take back [the dog] for impoundment. This type of action could result in the municipality assuming liability should the dog become aggressive and bite again. While everyone in the field of Animal Control should do what can be done to better the lives of animals, the first responsibility of all Animal Control Officers is to the safety of the public.”

• Reviewing current policies & procedures of the facility, in conjunction with City officials.

• Working with all stakeholders, including residents, interested volunteers, and City officials to ensure that the City maximizes the safety of residents and the welfare of all animals in the facility.

•   Making recommendations to the Mayor about potential sites for a new Animal Control Center.

The Mayor appointed Eileen Heaphy, District 8 Representative, and Art Layton, former City Representative, to lead the task force. Heaphy and Layton were the key leaders in the formation of the Stamford Dog Park. The Mayor anticipates the full task force will be appointed before the end of next week.

Update on Current Operations of the Center
The Animal Control Center will continue to operate and serve the Stamford community.

• The Animal Control Center continues to adopt out animals to new owners. 12 dogs, 14 cats, 2 rabbits, and one bird have been adopted out since the investigation began.

• Volunteers will not be permitted to volunteer until new policies and procedures are reviewed and put into place.