The Sam Bridge farmer’s market, which launched on Jan 20, reconnecting fans of the summer market at Horseneck lot with several of their favorite vendors. The Horseneck Lot farmer’s market opens on May 19.

And, whereas the market in Horseneck Lot is a “Connecticut Grown” sanctioned market under the CT Dept of Agriculture, the Sam Bridge farmers market is able to feature a broader array of vendors.

Since it started in January, the winter market has moved out of the greenhouse and the vendors now use outdoor tents. 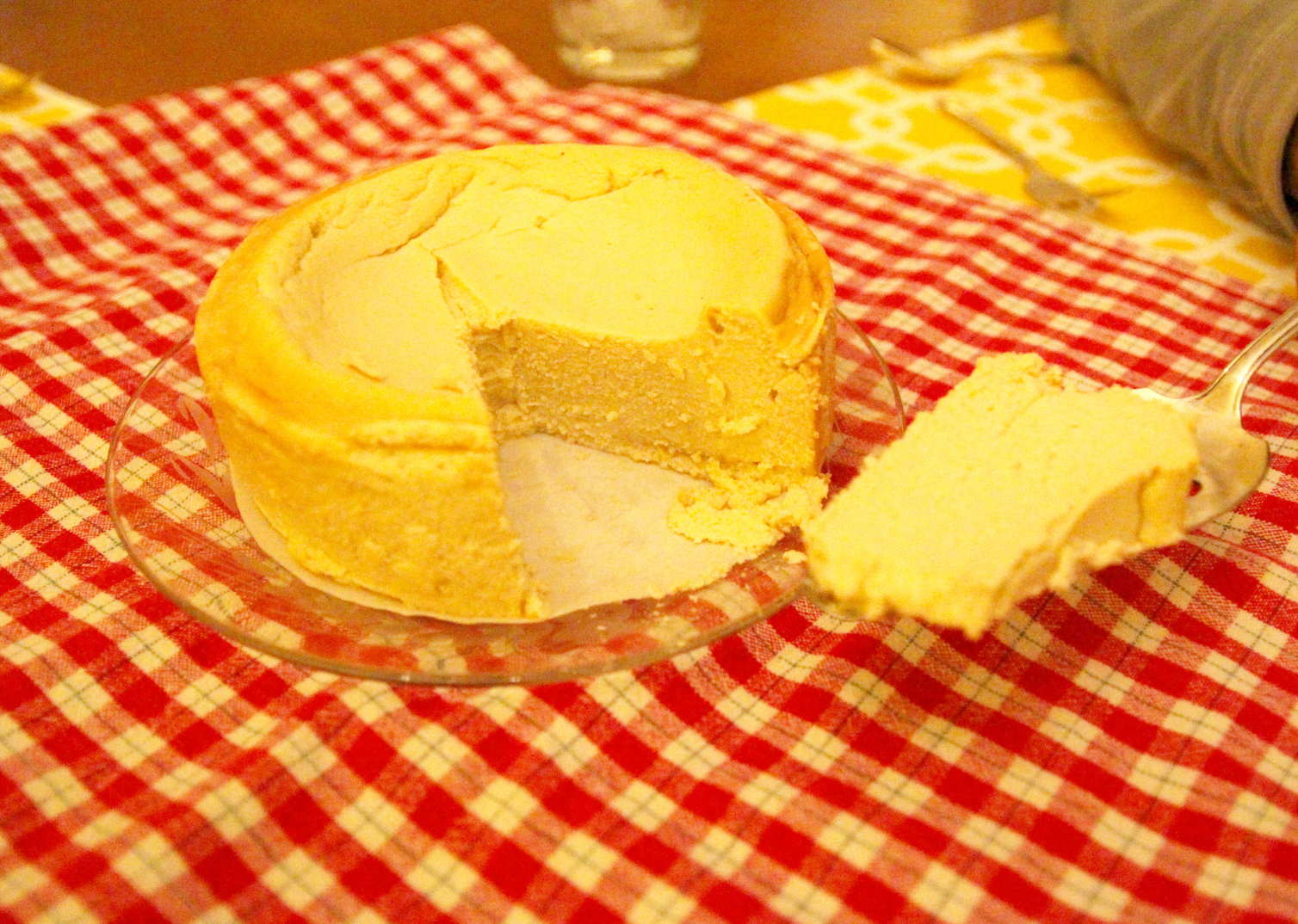 We tried her ricotta-based cheesecake last week. Delicious and not too sweet.

Victoria said her soups have been super popular this winter. “The turnout has been twice as good as we expected,” Victoria said. She also has fresh Bolognese sauce, delicious over pasta.

Jackie Mendive of Empanadas On The Go has joined the market, which, in addition to Sankow’s, also includes, Four Mile River Farm, Carrot Top Kitchens, On the Rocks Farm and Wave Hill Breads. The regulars are supplemented by rotating “guest” vendors. Stop by and be surprised. 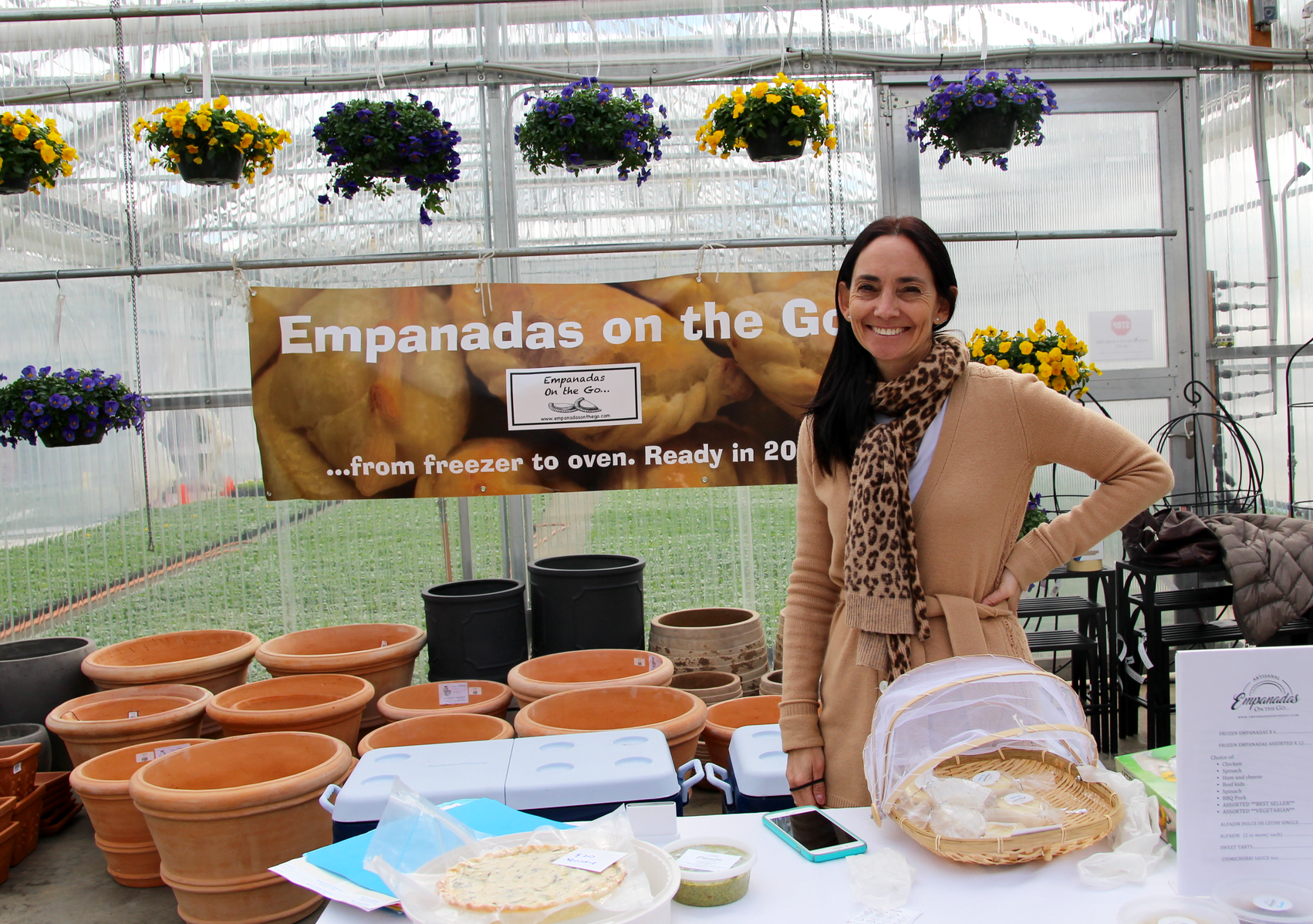 Jackie Mendive of Empanadas on the Go at the Winter Farmers Market at Sam Bridge. March 10 , 2018 Photo: Leslie Yager 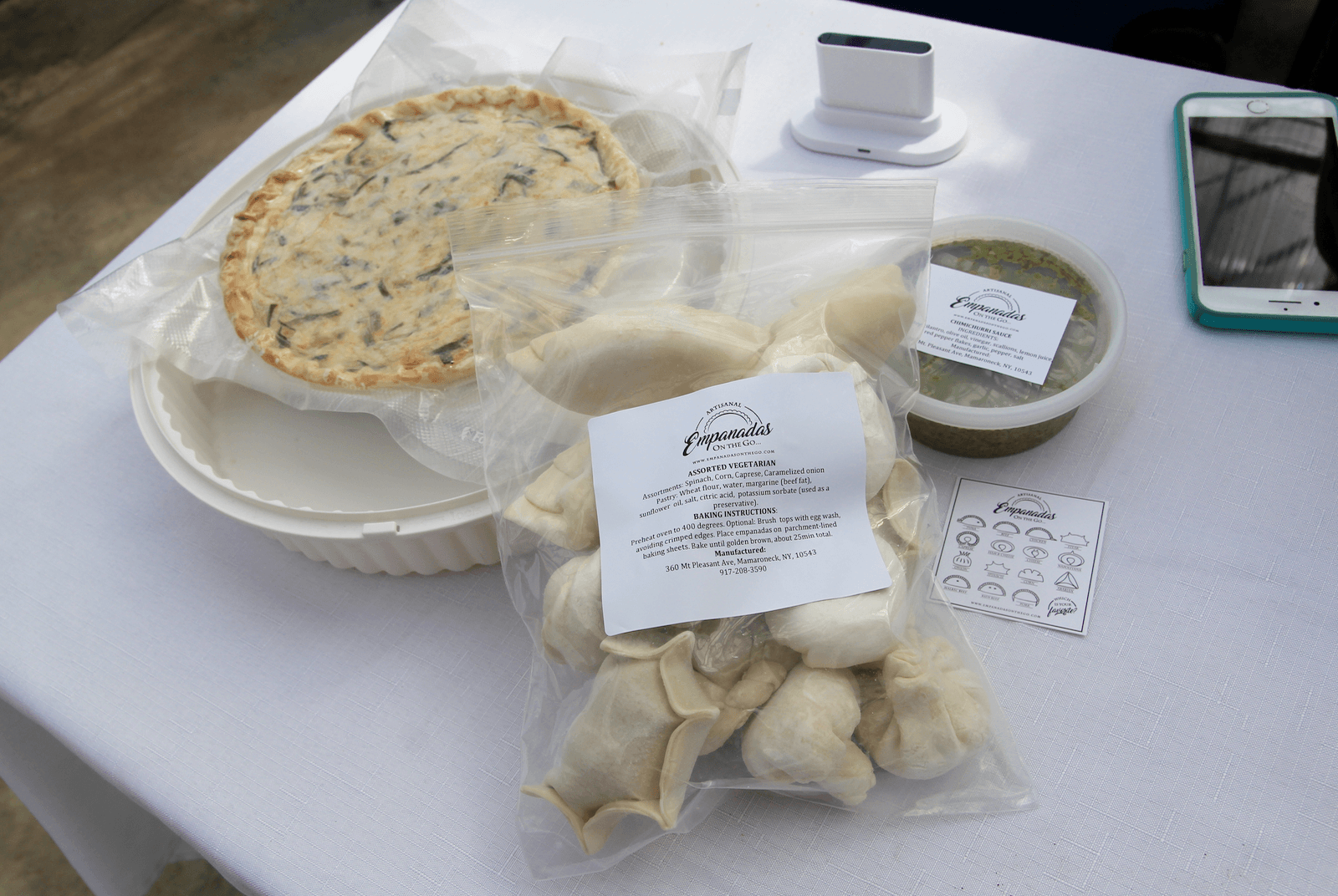 Jason from Four Mile River Farm in Old Lyme is a staple of the winter farmers market at Sam Bridge and, offering a variety of beef, pork, chicken and prepared foods.

“We try to do something different in the off season. That’s when we have time to experiment a little bit,” Jason said. New items have included pork cutlets, smoked ribs, beef cutlets, country gravy made with Four Mile River Farm’s breakfast sausage, all beef meatballs and, GFP’sfavorite, “Pork Candy.”

“The pork candy is smoked, but not as long as the jerky and it has brown sugar,” Jason said. “It’s sweet!”

Jason, who is a regular face at the summer farmers market at Horseneck Lot, said the off season market at Sam Bridge operates under a different set of guidelines because is private. 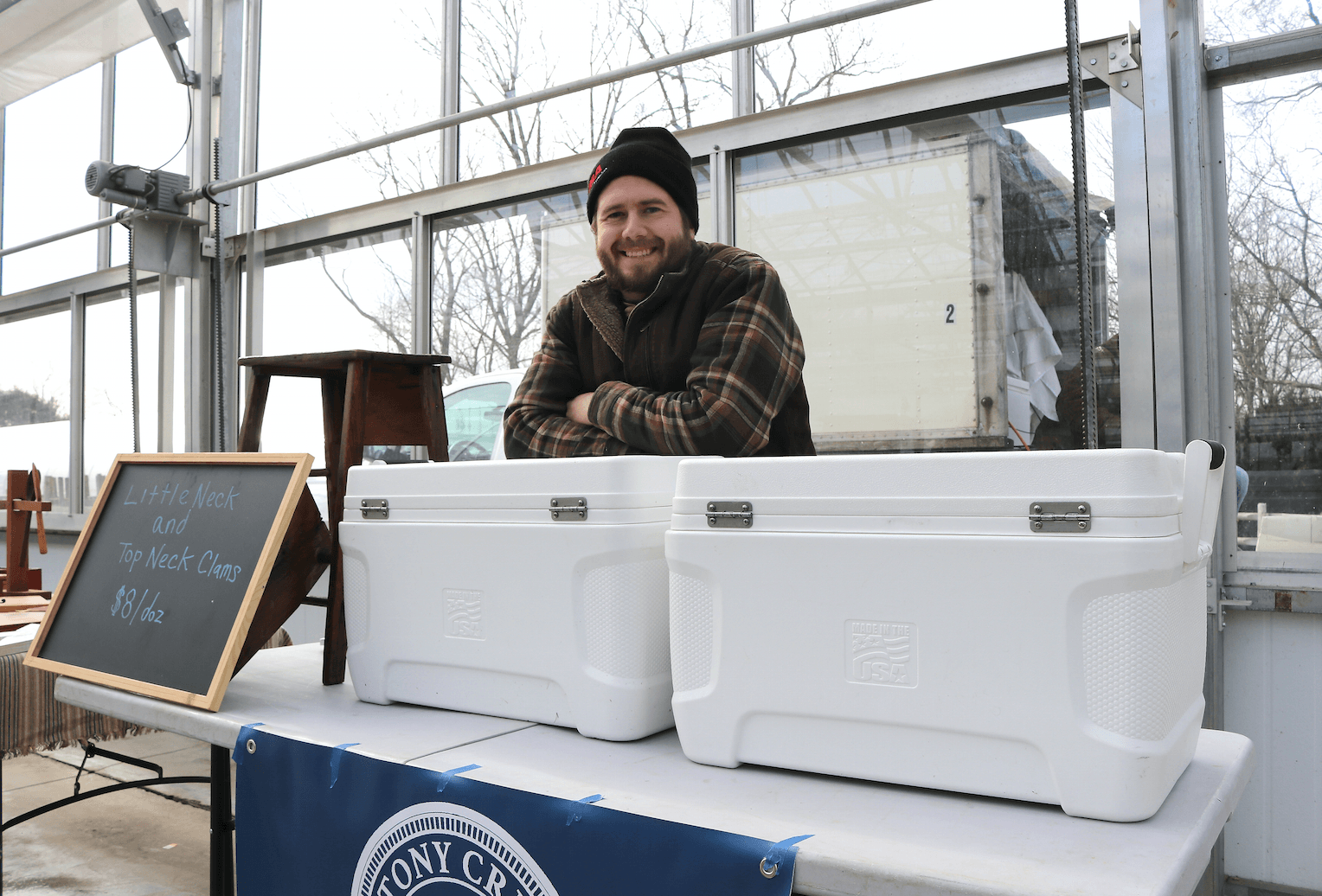 Over at the Stony Creek Ocean Farm table Nick Pastore, who operates out of Branford offers clams and oysters.

Pastore, also an avid woodworker, has found his cutting boards and wooden spoons to be popular sellers.

Nick Bridge, who organizes the farmers market, said every guest gravitates to his family’s vintage truck on display with its original sales receipt taped to the window. At $1,668.76, the it served as the only truck for the business back in 1948, when his great uncle and grand father were in charge.

“It was their primary truck until 1984,”Nick said. “Later we had it cosmetically restored. More recently, I had it mechanically restored. It fires right up. It runs good.” 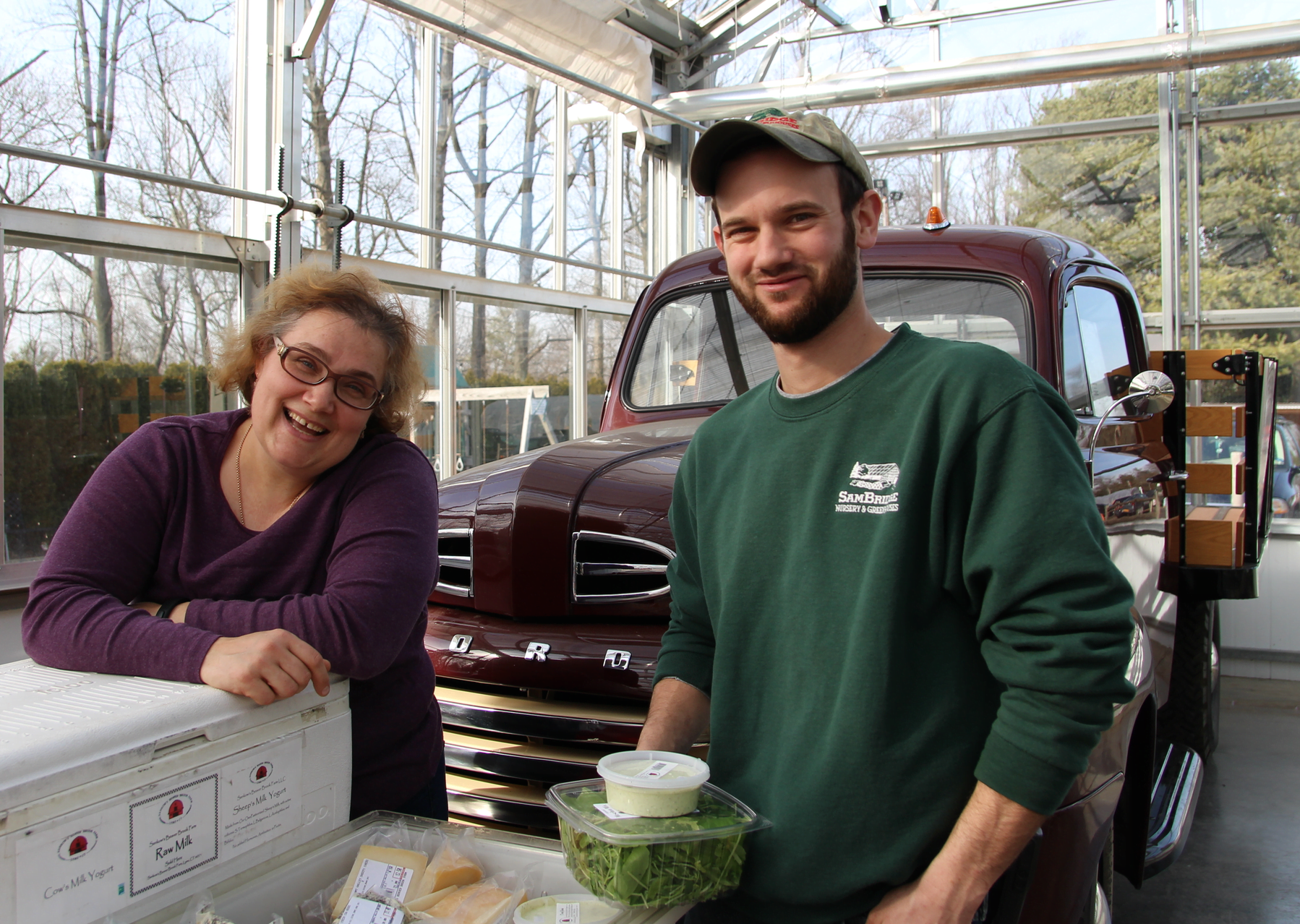 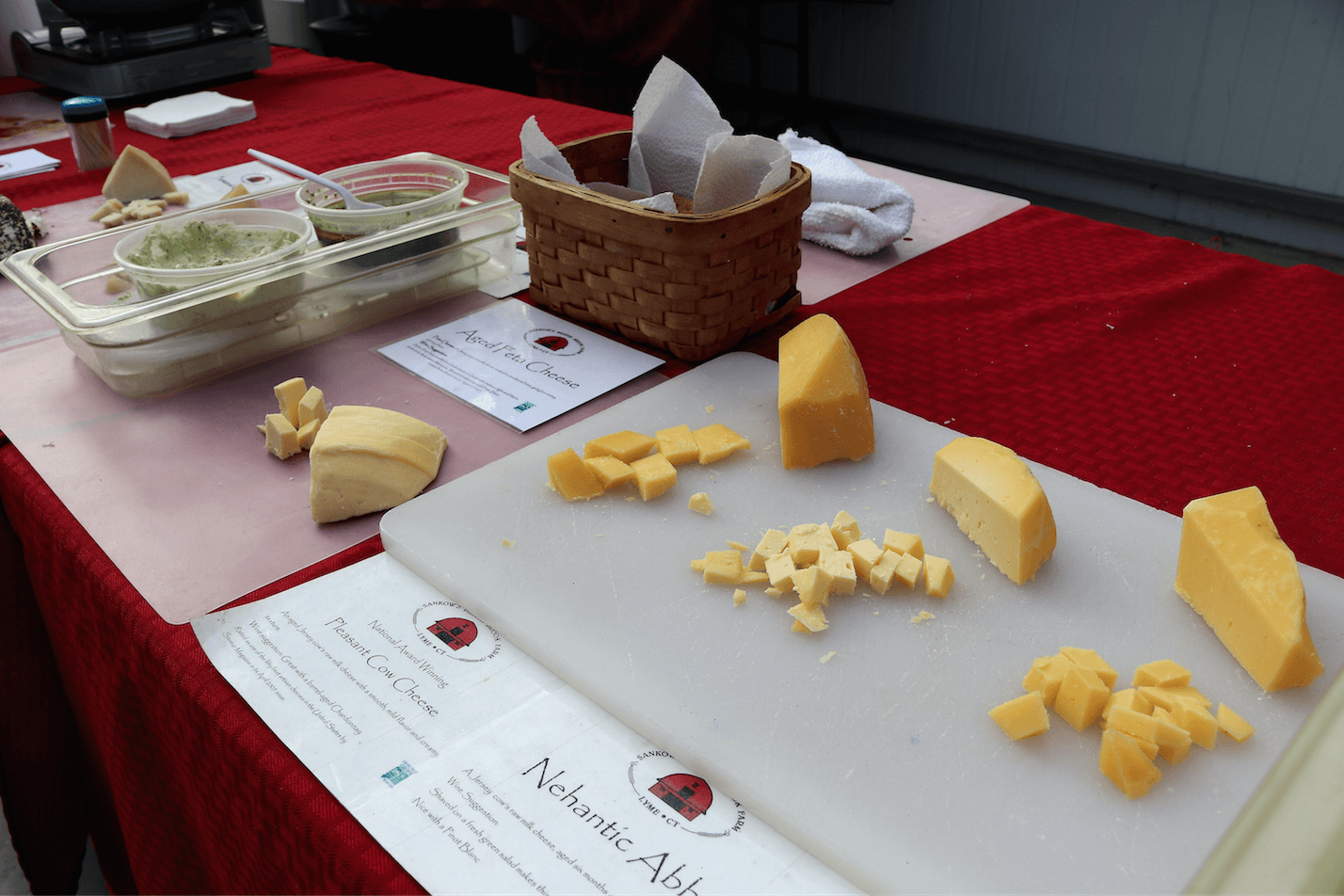 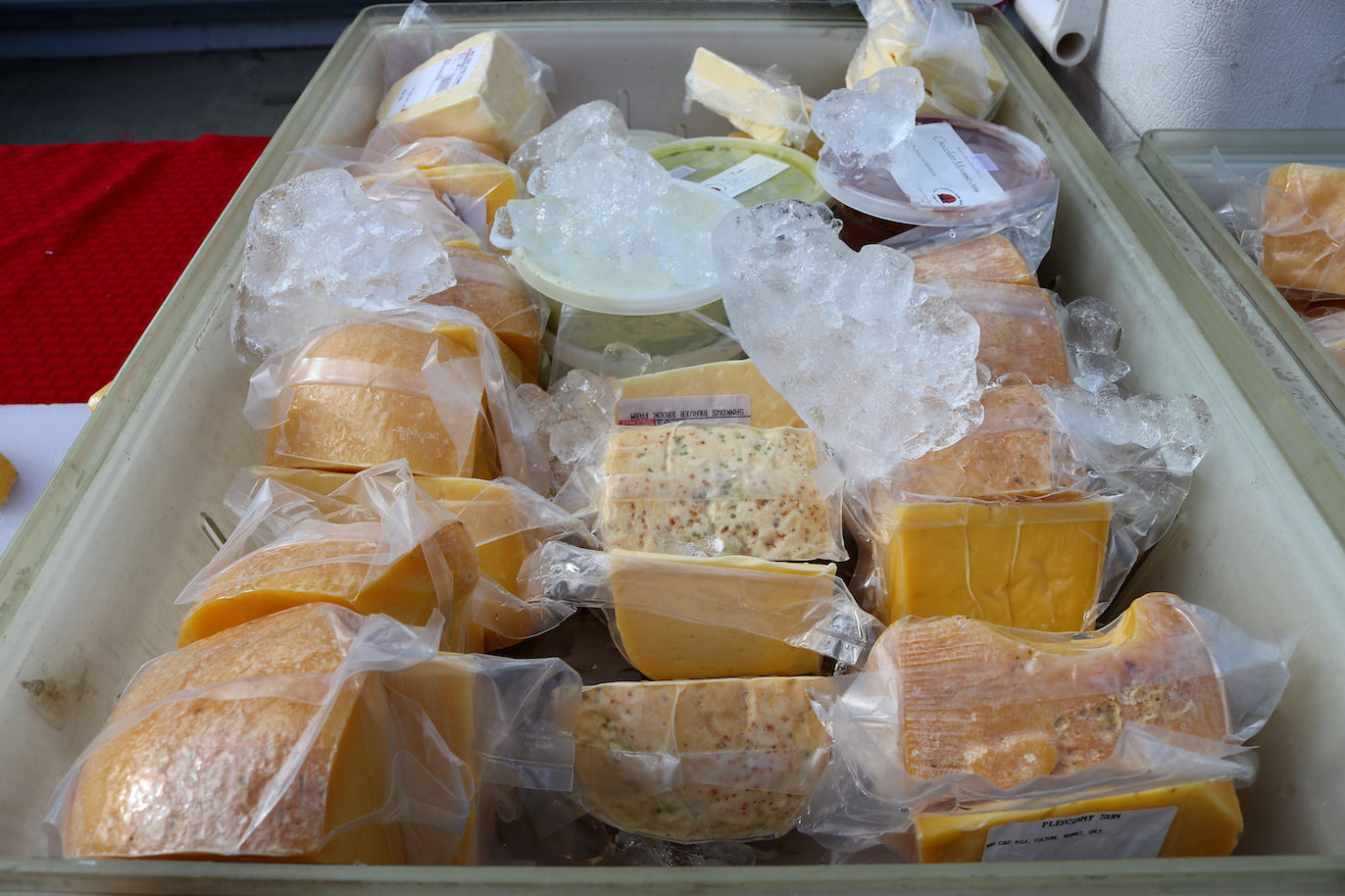 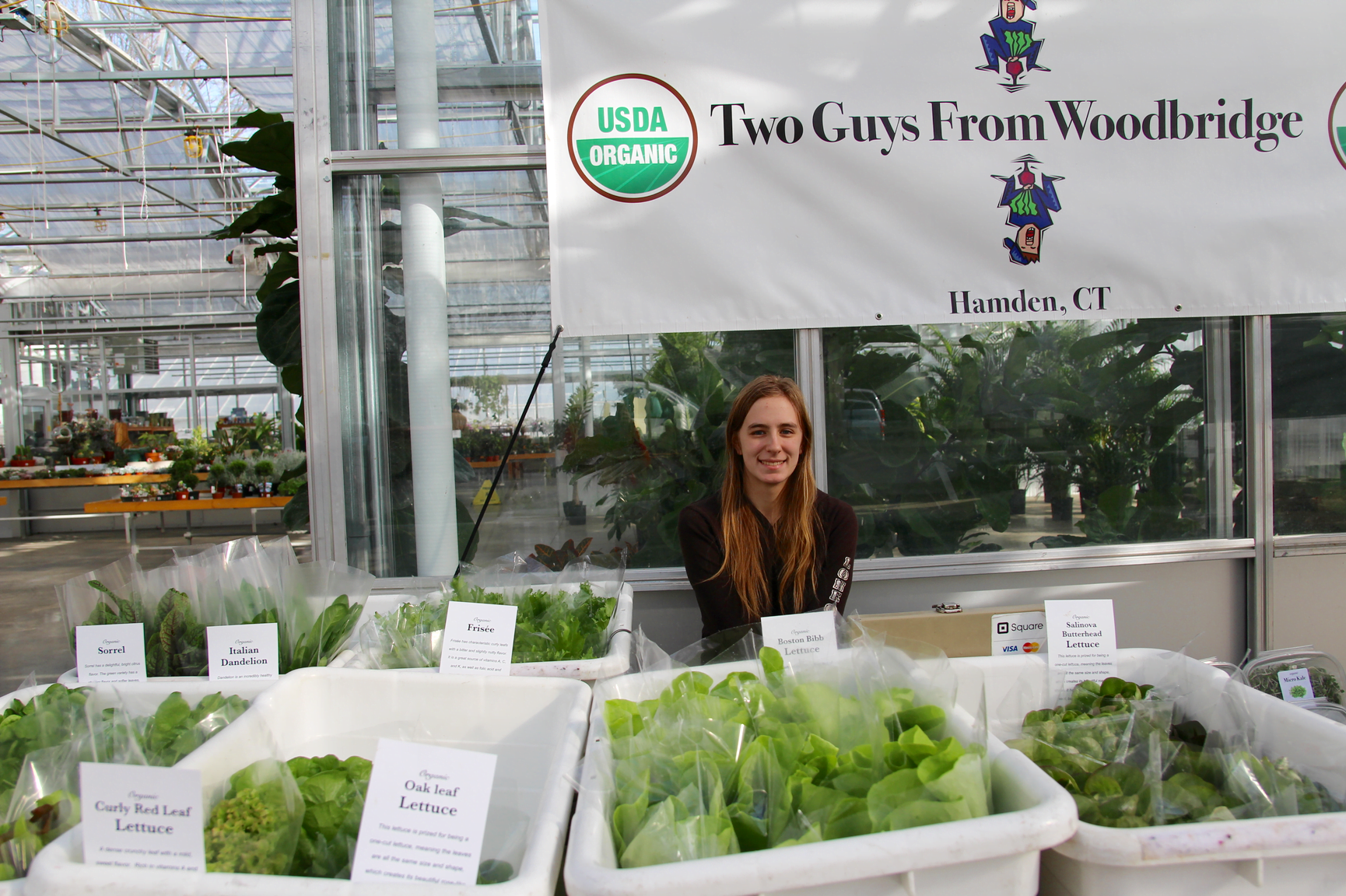 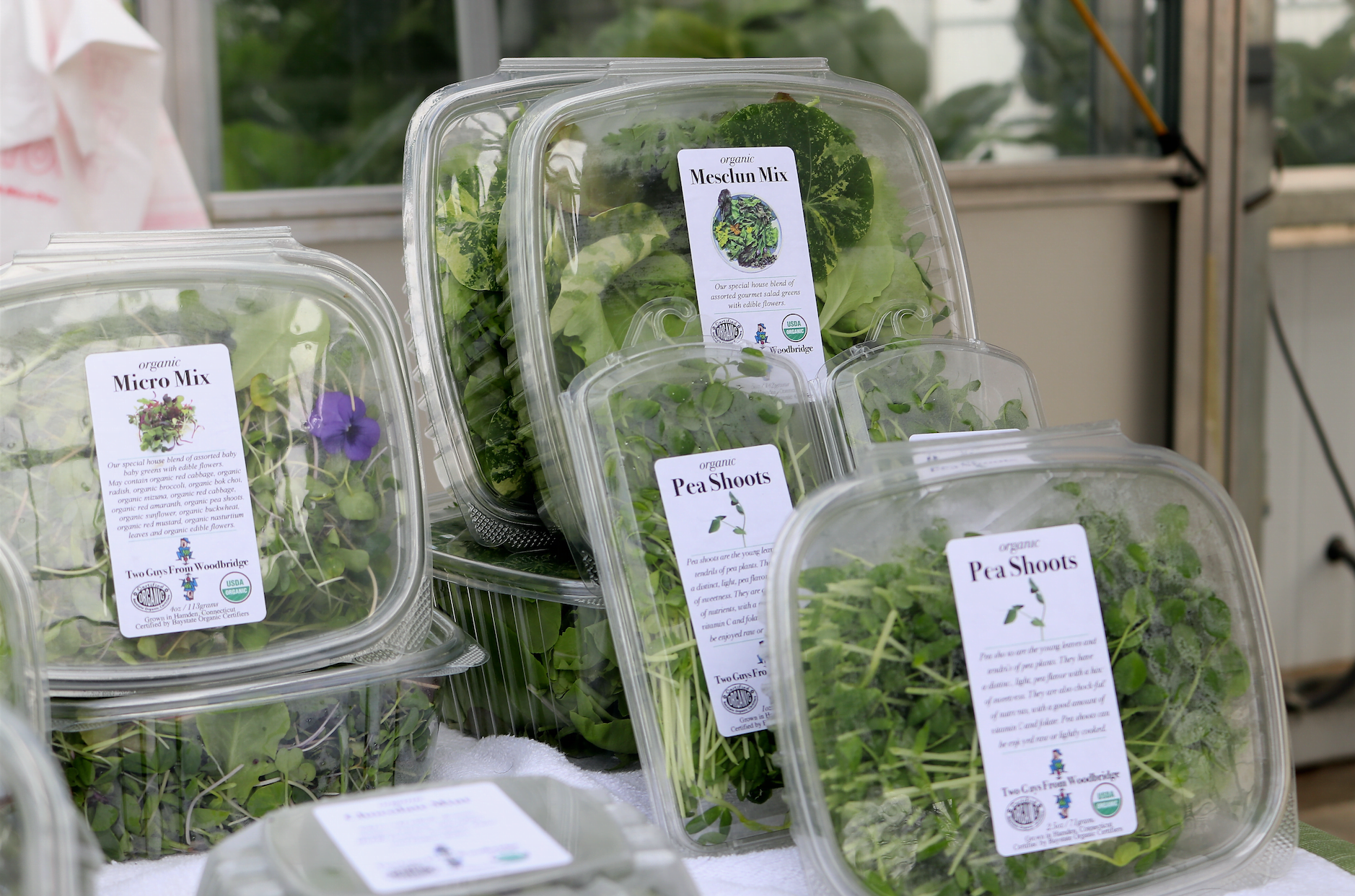 And then there are the Stinging Nettles! Yes, they were delicious as promised, steamed and add a little bit of butter. But don’t pick them up with your fingers. Use tongs! 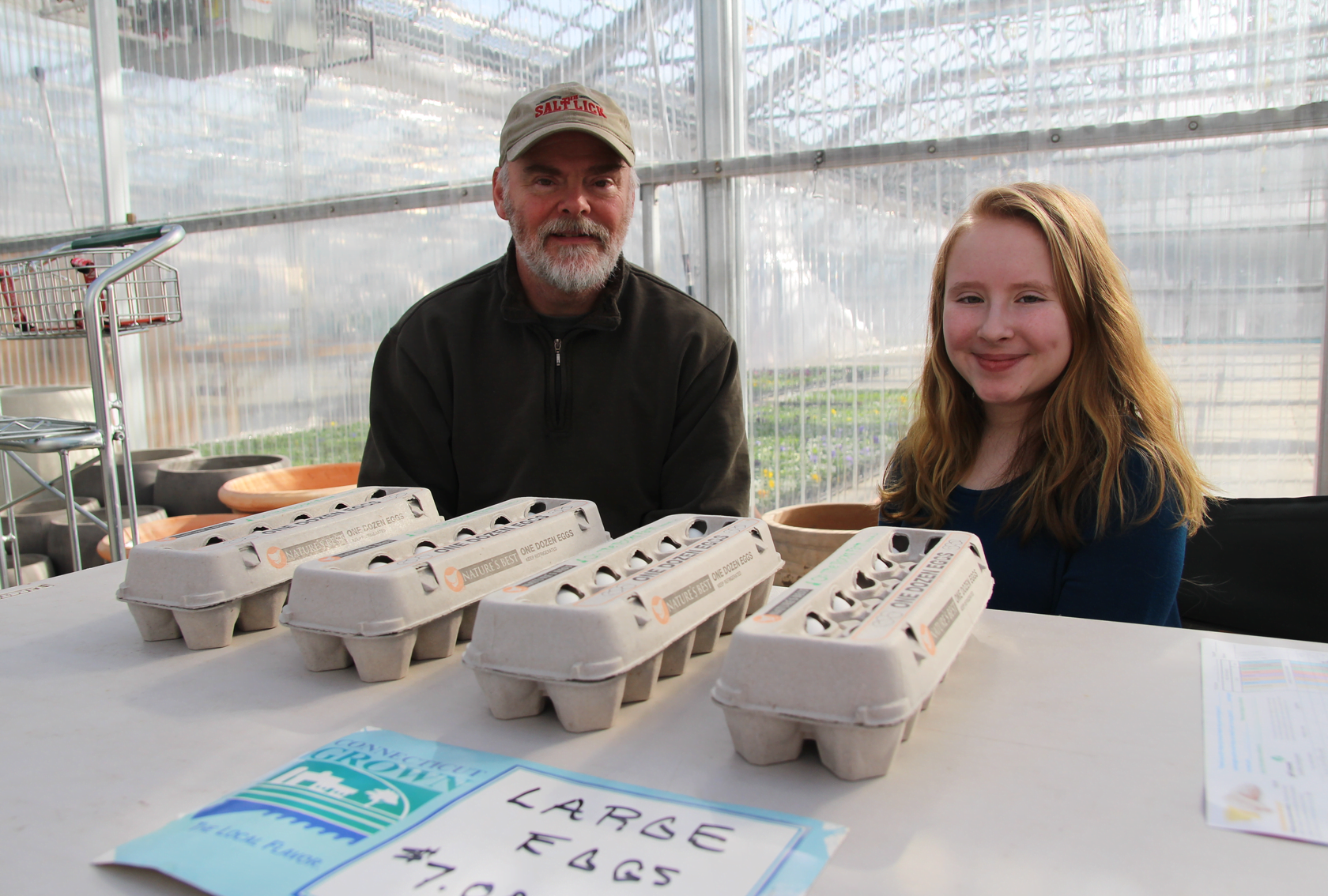 From On the Rocks Farm, Bill Pieragostini and his daughter Maili with fresh eggs. Photo: Leslie Yager

At On the Rocks Farm, Bill Pieragostini and his daughter Maili sell fresh eggs for $7.00 a dozen.

Pieragostini said Sam Bridge sells  tomato sauce, maple syrup, honey and eggs year round.  Though he has loyal customers who source his eggs from Sam Bridge in the winter, it’s been nice to see them in person.

Rounding out the mix was Wave Hill Breads with a variety of handcrafted breads and treats made from organic whole grains milled at the bakery in Norwalk.

The winter farmers market at Sam bridge runs Saturdays from 9:30am – 1:00pm through mid-March.

On the Rocks Farm 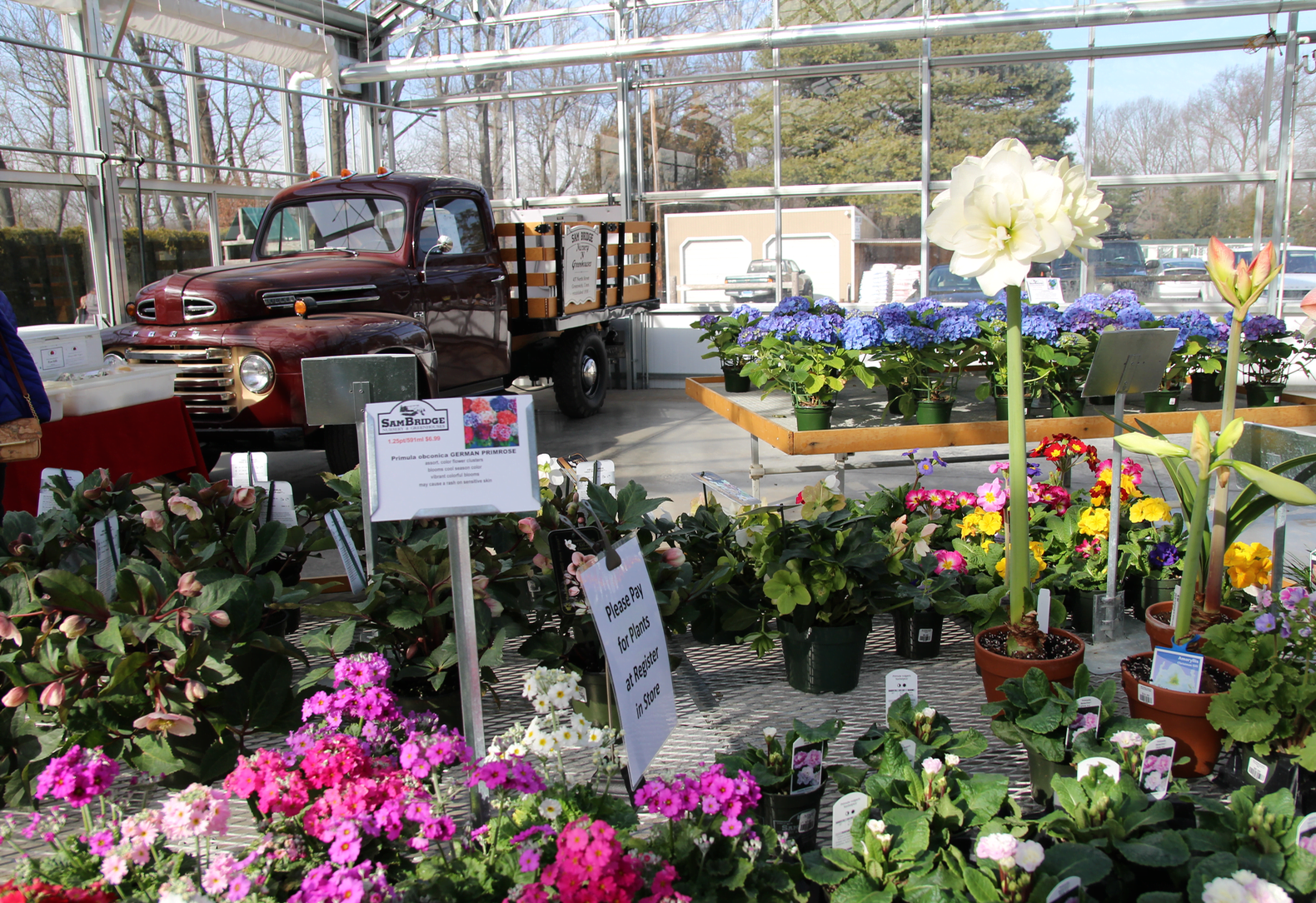