The Parity Partnership, a Greenwich based non-profit, hosted its inaugural event on Friday night. The venue was the Bruce Museum, and the occasion drew a crowd.

Prior to featured speakers and a lively panel discussion, Senator Richard Blumenthal thanked the “magnificent, dynamic triad of Alex, Deirdre and Dita,” the founders of The Parity Partnership.

“Starkly, and sometimes staggeringly, women are at the mercy of the workplace that fails to give them the parity that is in all of our interest for them to have,” he said reminding everyone that April 12 was Equal Pay Day and the Paycheck Fairness Act was introduced in the US Senate. 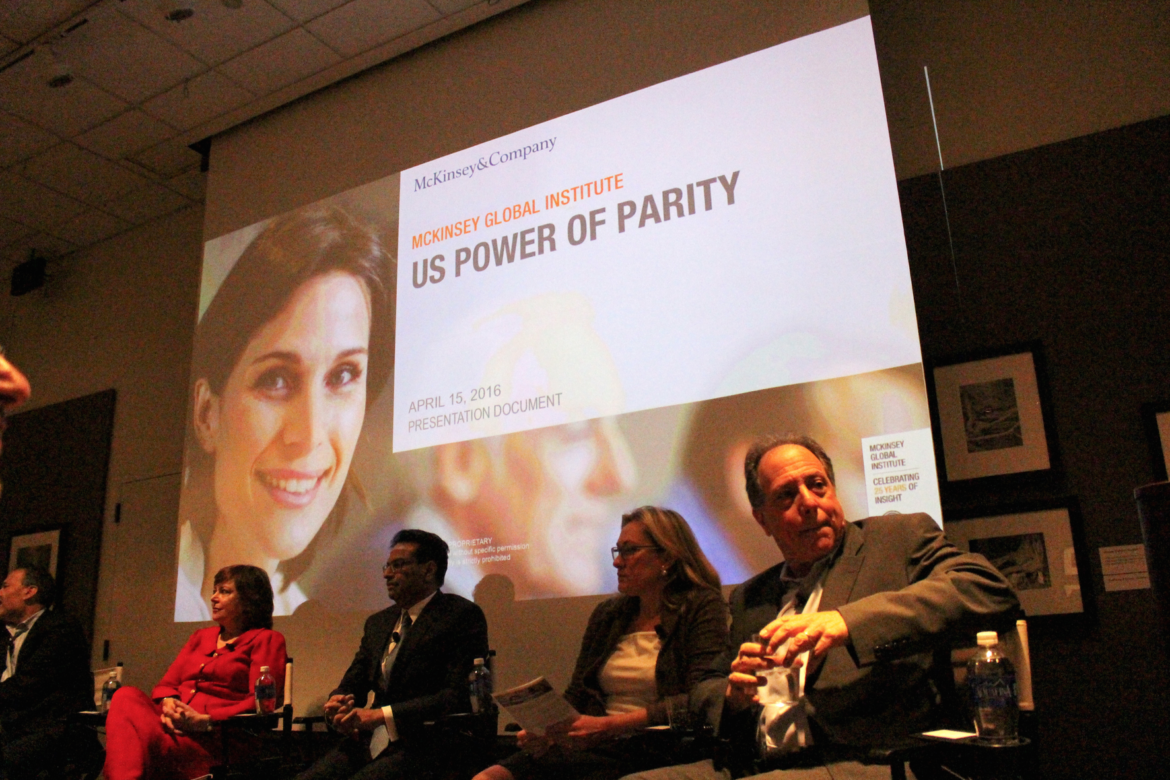 “One way is the ethical imperative: Gender equality is right. It’s fair. It’s just and it’s the American way,” he said, using the example of Canadian Prime Minister Justin Trudeau who appointed half his cabinet positions to women.

“Another one is the cavalry approach. The light bulb goes off over our head. ‘Thank you so much for bringing this to our attention, ladies. We’ll take it from here,'” he said.

Kimmel said a third response is to mansplain: “‘We’ll invite them to join us. That means you will act like us. There is a place at our table for you.'”

Kimmel said most men associate the word gender with women.  “Most men don’t know that gender is as important to us as women think it is important to them. It’s political,” he said. 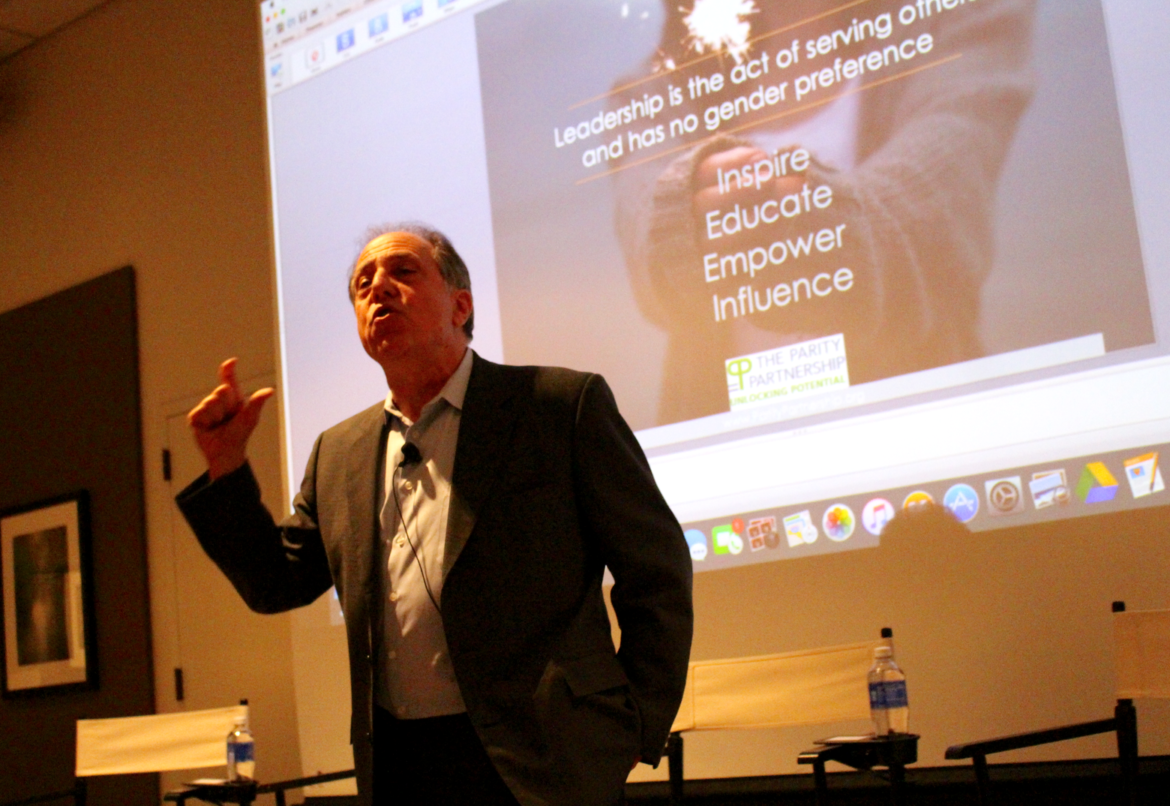 Stony Brook professor Michael Kimmel, author of of the best seller Guyland: The Perilous World Where Boys Become Men, said his female students are dismissive of “feminism,” telling him that was a fait accompli of women in a past era. He said that when his return to visit five years down the road, they have a different point of view.

Is Gender Equity a Zero Sum Game or Will the Size of the Pie Grow?

Kimmel said gender equality is perceived by many men in corporate settings as a zero sum game: If women win, men are going to lose.

He recalled appearing on a TV talk show opposite four white men who believed they lost their jobs because they were victims of reverse discrimination. He said the title of the show was ‘A black woman stole my job.’

When it was Kimmel’s turn to speak, he asked the men about one word in the title: My. “Where did you get the idea it was your job? Why isn’t the title of the show, ‘A black woman got a job,’ or ‘A person got a job.'”

“Without confronting men’s sense of entitlement, we’ll never change. We grew up thinking this was a level playing field,” Kimmel said. “Let me be clear. Men are the single greatest affirmative action program in the world. It’s called The History of the World.” 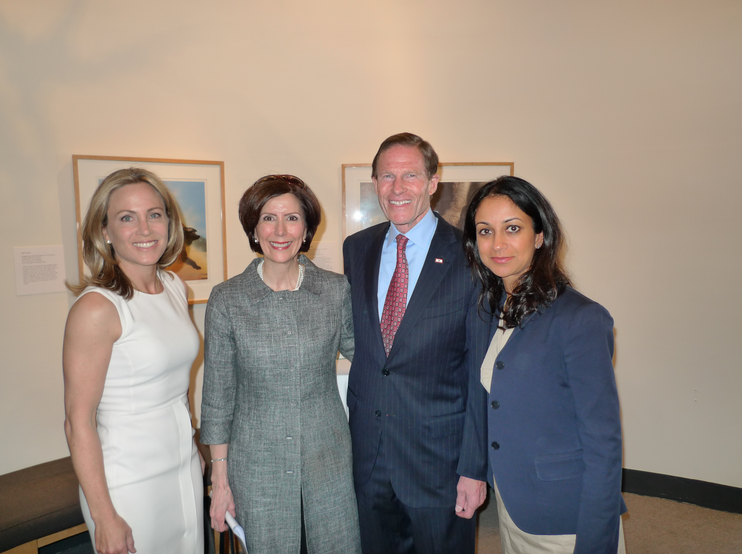 Panelist Barbara Daniele recalled the day she was offered a promotion early in her career. She said that at the time she had no idea the promotion would launch her on a steep upward trajectory in her career, but initially balked at the offer.

Danielle said that, at her prodding, a male colleague had shared information on the the salary of the job for a man. In turn, she insisted she receive that salary – roughly $90K versus the $70K she had been offered.

The standing room only crowd groaned in at  Daniele’s depiction of her company’s human resources department. Ultimately, Daniele said she stuck to her ground and got the higher salary. 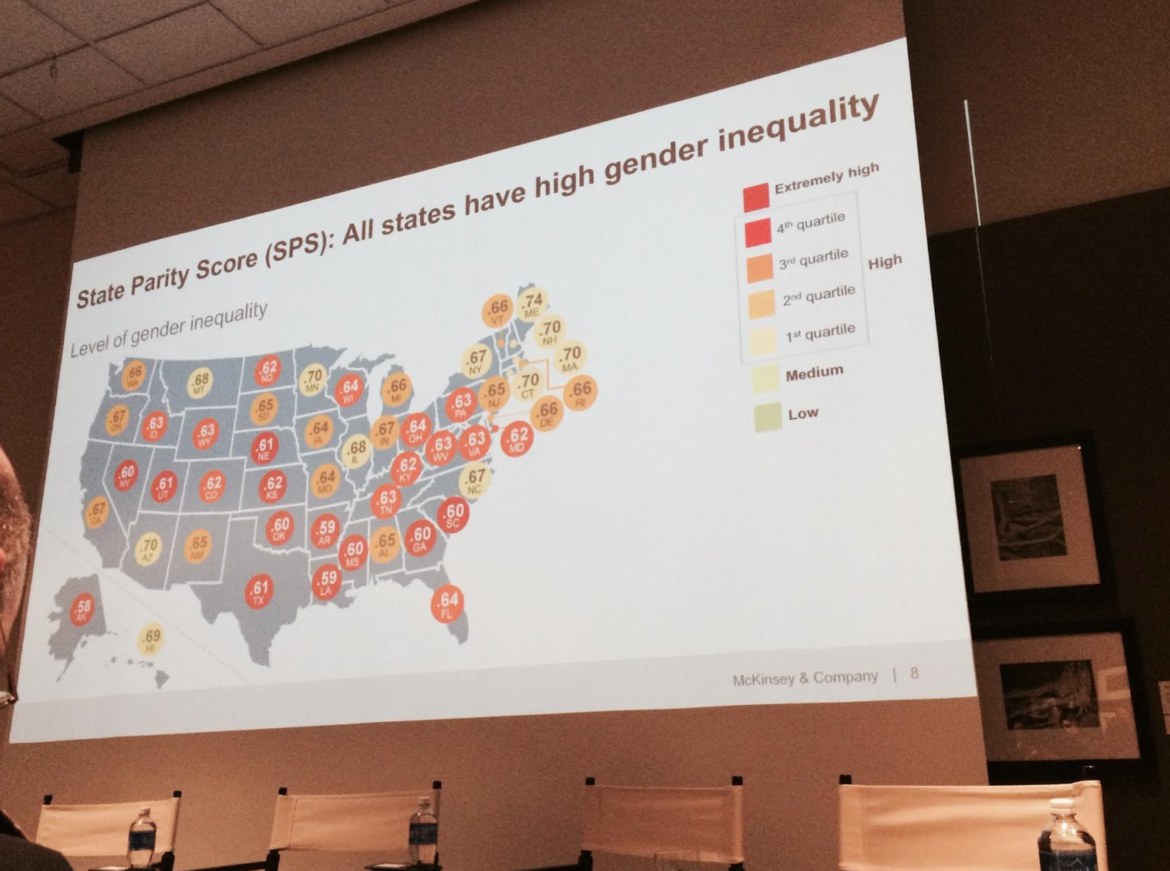 McKinsey compared gender equality among states. With a possible 1.0 score as maximum, Connecticut achieved a .70, as did Massachusetts. Maine bested both with a score of .74.

Mekala Krishnan presented cutting edge academic research from the McKinsey Global Institute on advancing women’s equality in the US. The research, bound into a 56-page report and distributed to all attendees, was the result of 1-1/2 years of work.

“One of the most surprising findings for me was thinking that the US has made a lot of progress on gender issues, but there is still a long way to go,” Krishnan said, adding that the reason business leaders should seek gender equity is not solely because ” it is the right thing to do.” She said increased representation of women in leadership pays “a diversity dividend.”

She explained that based on empirical evidence, if states with less gender equality replicated efforts of the states that have, that by the year 2025, the US GDP could increase by $2.1 trillion.

“That’s a huge number,” Krishnan said. “That is equivalent to adding a state the size of Texas to the economy. The message is that gender equality is not just the right thing to do. It’s the smart thing to do.”

The McKinsey study found that companies that invest in women have a 15% higher financial performance, and that, of 9 particular leadership behaviors of successful companies, women apply 5 out of 9 of them.

Krishnan said considering that more women attend college than men, and more valedictorians are women, it is a wonder that more women aren’t represented in leadership positions. She said that as women move through the pipeline from entry level, to manager, senior manager, VP, Sr VP, and ultimately to the C-suite, their representation decreases from 45% at entry level to 17% at C-suite. 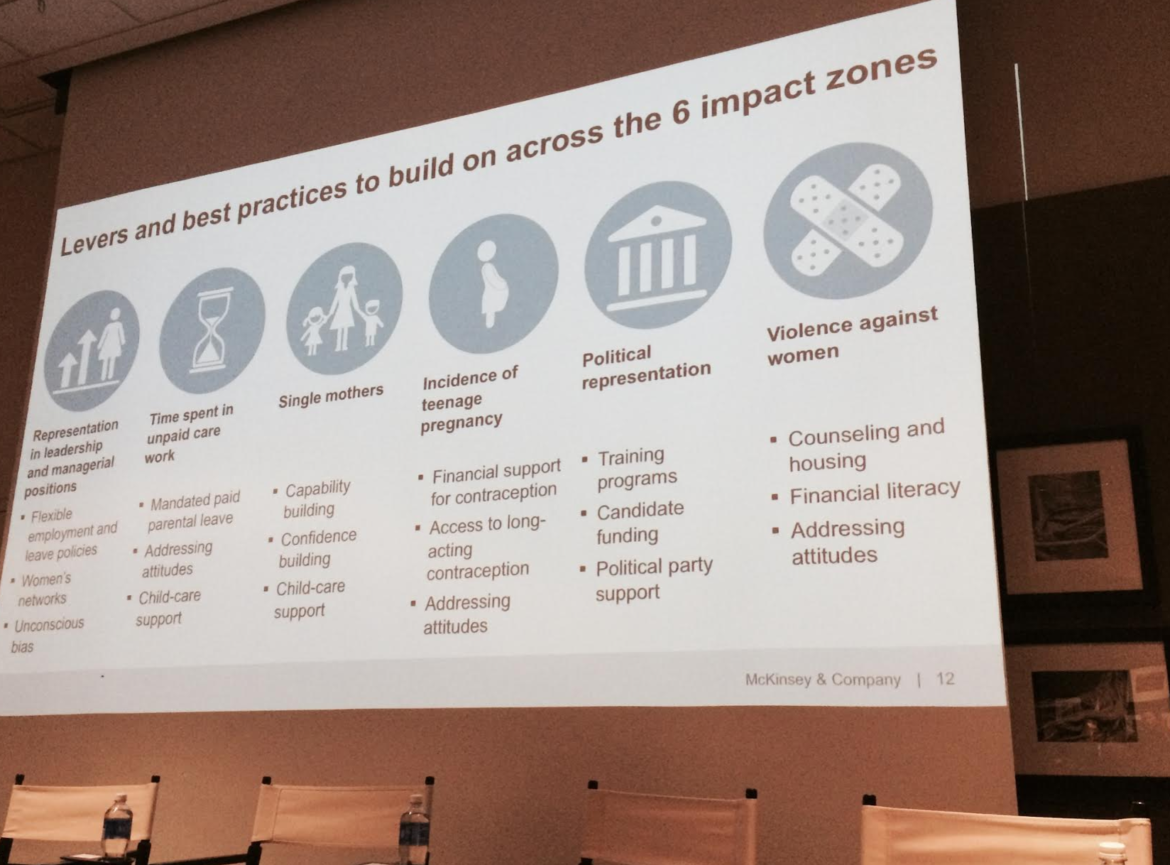 Krishnan said women make up fewer of the ranks as they rise from entry level through management and into company leadership roles. She said women do twice the amount of unpaid work including childcare, housework and shopping. She said teen pregnancy and single mothers correlate to poverty

Recalling a chat with a group of fraternity brothers at an Ivy League college, Kimmel said the boys bragged about their amazing frat parties where everyone got drunk and hooked up. He said the boys continued to brag, but eventually he was able to reach one of the boys, who said he wouldn’t want his own daughter to go to one of his frat parties.

“It’s not about changing men, but remembering what we already know,” Kimmel said. “Thinking about the love and caring of women who are in our lives.”