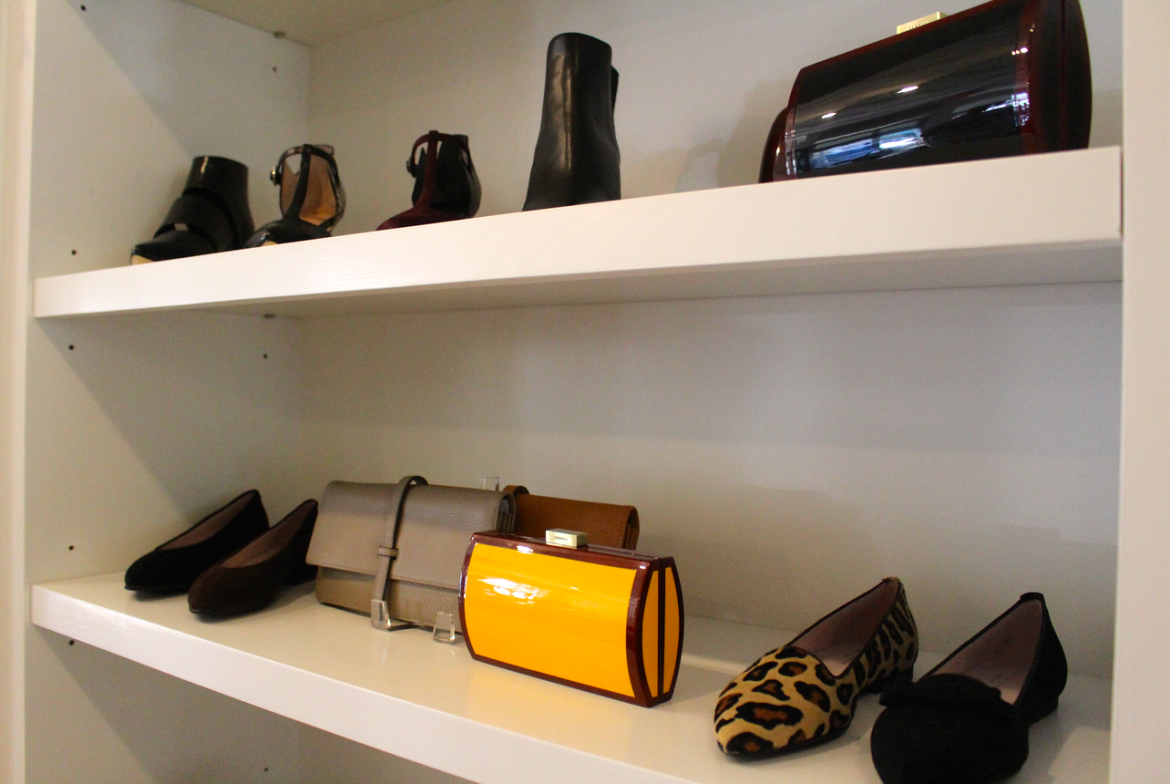 Audrey Aguilar, a longtime Riverside resident, mother of two and former banker, has always had a secret fantasy of owning a shoe store. “Everyone loves shoes, right?” she said during the soft opening of her store this week.

On Wednesday, a stream of shoppers wandered into the store ahead of Friday’s grand opening. “The reaction has been very positive so far,” Aguilar said as a line formed at the register.

Aguilar’s daughter Lily, a middle schooler at Greenwich Country Day School, inspired the name for the store, which is located at 250 Sound Beach Ave, in the heart of the village of Old Greenwich. 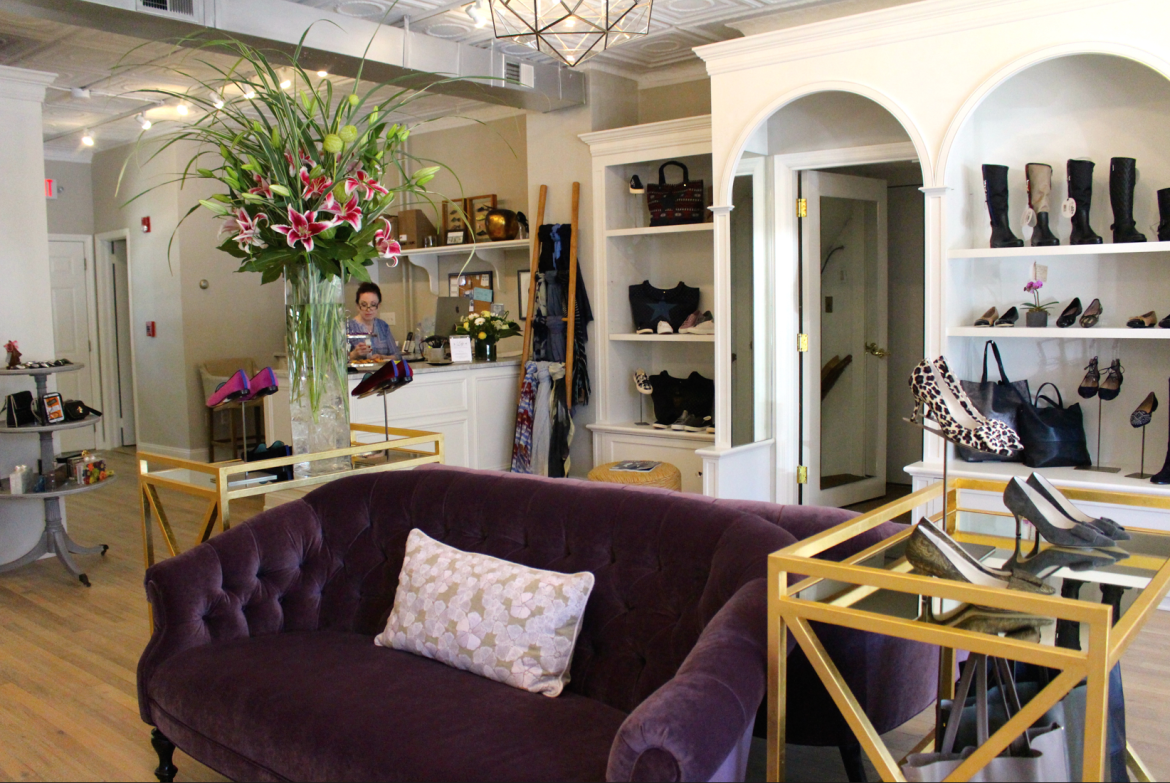 The Stanford economics major with a Master’s degree in accounting from NYU worked in banking for many years. But she knows her shoes!

Aguilar’s foray into the world of retail started at Fred, a woman’s clothing store at 236 Sound Beach Ave where she worked prior to opening Lily this week. When Pastiche came to the end of its successful 20 year run, Aguilar jumped on the opportunity to open a shoe store in that space.

“Fred will dovetail nicely,” Aguilar said. “Make an outfit,” she suggested of the complimentary stores. 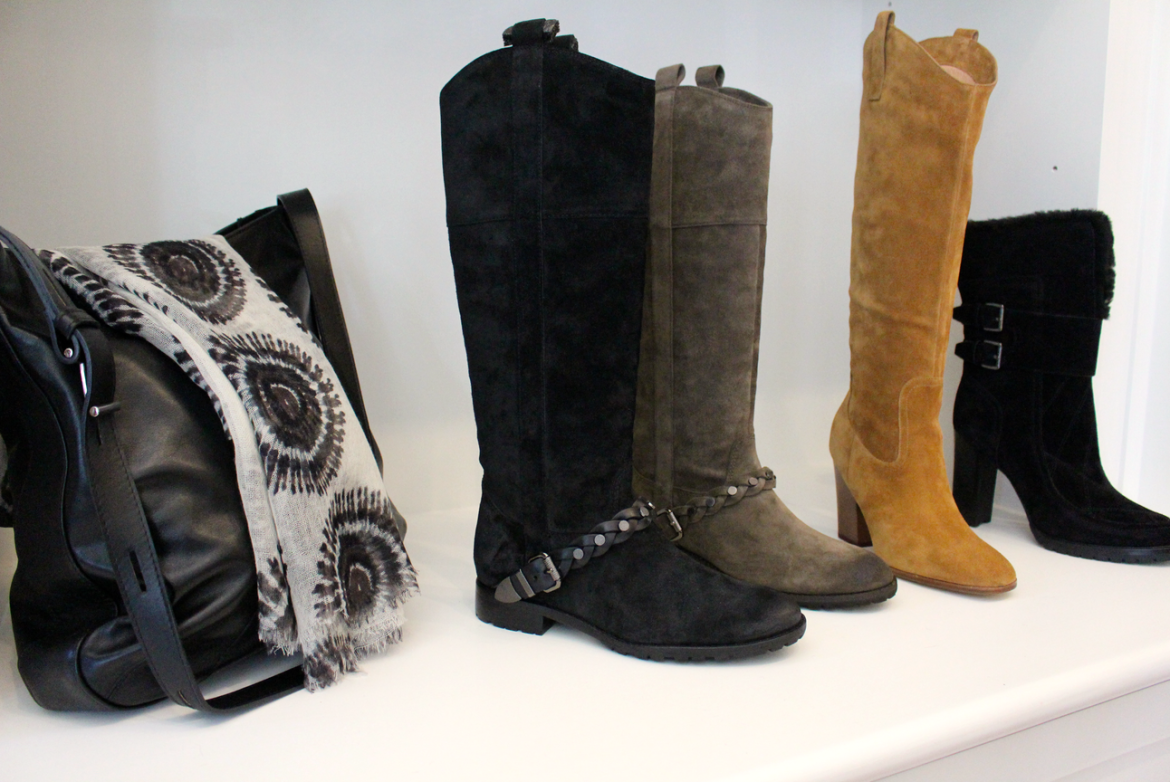 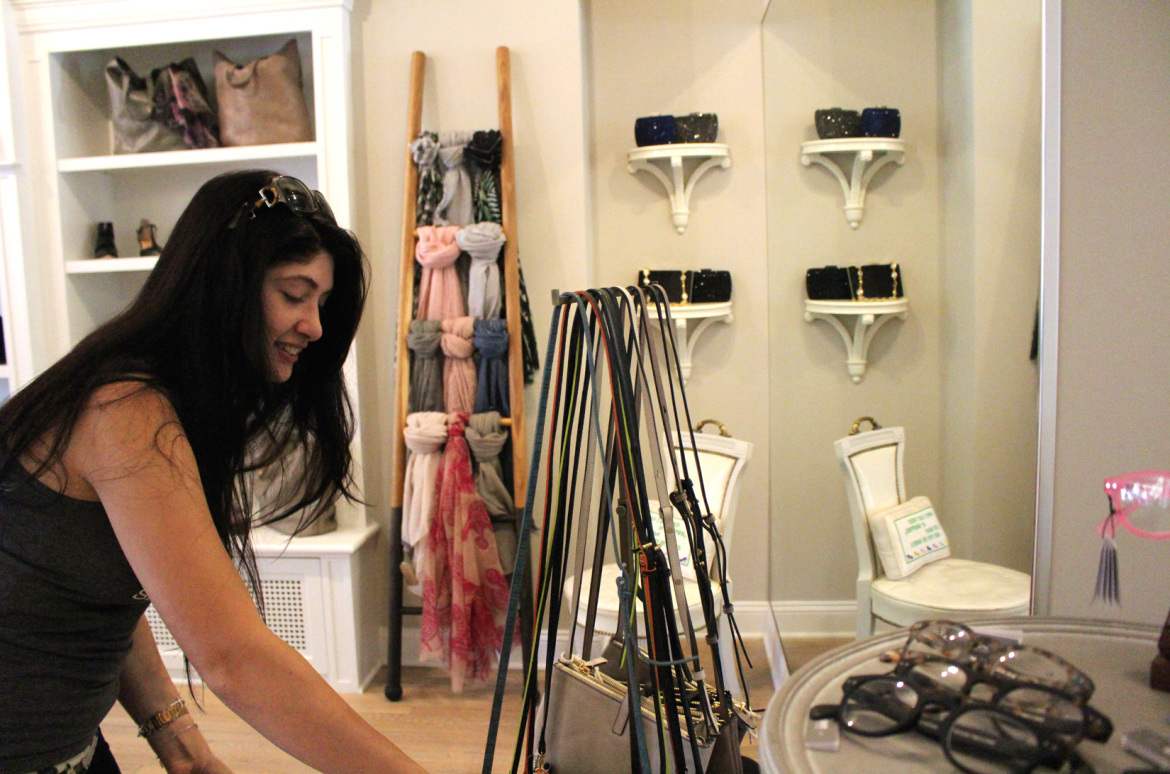 Christie Feldman, a student at LIM, who formerly worked at Pastiche, perused the shoes and accessories at Lily on Wednesday. Credit: Leslie Yager

“We’re coming in at high-style with a lower price point,” Aguilar said. “I picked designers who you won’t find elsewhere in Fairfield County,” she said adding that her price points range from $50 to $750. 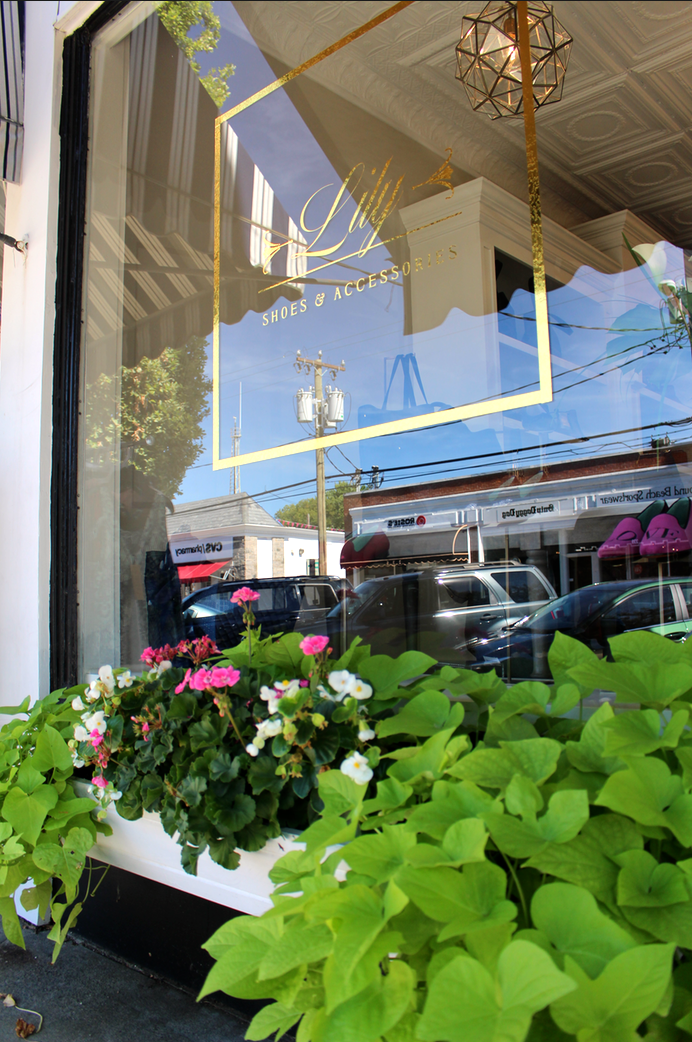 The store is very inviting with its back-to-back purple sofas.

Aguilar, who lived in London with her husband Peter for several years, said the experience of shopping in Kensington and on Portobello Road made an impression on her.

“I wanted a store with nice moldings and envisioned a space with the feel of a living room that would be comfortable like my Kensington living room — sort of a social hub where you can stop by and have a cup of coffee.”

“I want the space to get used. It screams socializing,” Aguilar said. “I’m hoping to also use the space at night for trunk shows and charity fundraisers.”

Aguilar said that her daughter Lily, the store’s namesake, is totally into fashion and retail. In fact, both her son and daughter were a great help in setting up the store.

“They can read a packing slip and stock shelves. It’s not glamorous, but it was really fun,” she said of the family effort in preparing the store for its opening.

For those who remember Pastiche, the store will be familiar, but the antique tin ceiling is now painted white and the back wall now features an expanse of mirror, creating a more spacious feel for the shop. The store’s original hardwood floors have been stripped, lightened up and received multiple coats of urethane.

Of the tightly knit community of retail stores and restaurants in the village of Old Greenwich, Aguilar said she eagerly anticipates throwing her doors open during popular events like the annual block party, First Light in December and summer sidewalk sales. “We’re excited to be part of this community,” she said. 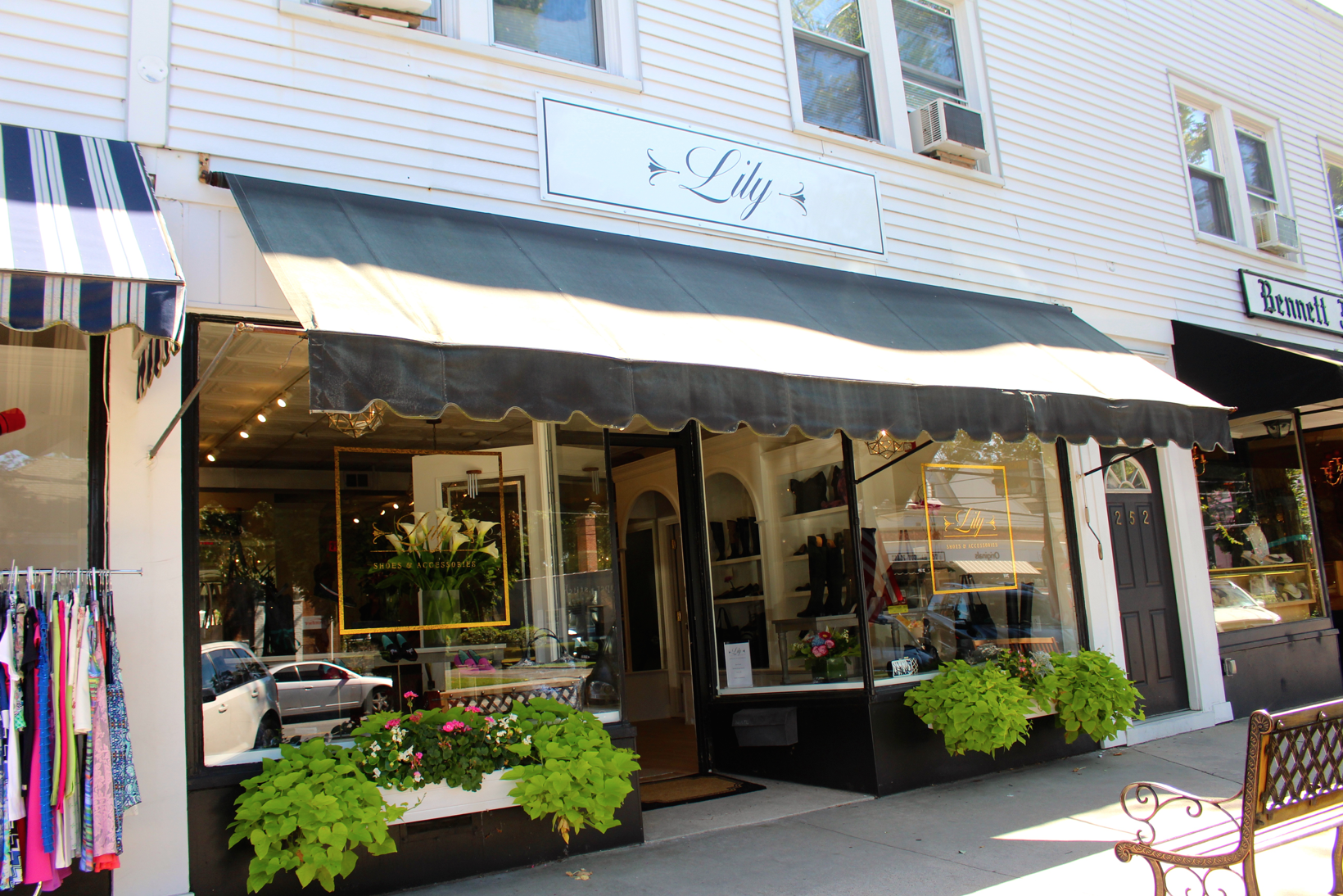 “Lily,” a new shoes and accessories store was named after the owner’s middle school daughter and has the cozy feel of a living room in Kensington. Credit: Leslie Yager

Newcomer to Village of Old Greenwich: “Gather” Infuses a Bit of Brooklyn Aesthetic