On Friday a caller to the First Selectman’s radio show complained about groups of bicyclists on Riversville Road who travel up to five abreast.

“They just do not move out of the way. Especially on Saturday morning,” the caller said. “They’re riding for their health and yet they might get hit by a car.”

The caller also complained that groups of bicyclists don’t obey the traffic light down by the Glenville fire house.

“And just try to get around them or blow the horn, and they get upset and start waving,” he said, adding that Riversville is a windy, making it even more unsafe.

“I share your concern,” Mr. Tesei said, adding that he had witnessed groups cyclists when he drove his kids to the Audubon, and said it might be a good idea for the Community Impact Officers to reach out to the bike groups to go over the rules. “Everyone wants people to enjoy themselves, but not impede on safety.” Mr. Tesei said that in the past there were issues with bike groups meeting up at the Griff golf course, and taking up 20 or 30 parking spaces.

In Connecticut Gen. Stat. § 14-232 requires cars to leave a distance of three feet of around cyclists when overtaking them.

At Saturday’s Wiffle ball tournament Police Chief Heavey told GFP that the police do stop the bicycle groups occasionally. “We pull over groups of bike riders and educate them on what the rules are,” Heavey said, adding that stops have been done stops on Riversville Road and at the intersection of Bedford and Cutler.

“It’s a dangerous situation,” Chief Heavey said, adding that police also check on the bike group websites. “They seem to wind up riding tandem and it’s not safe.” 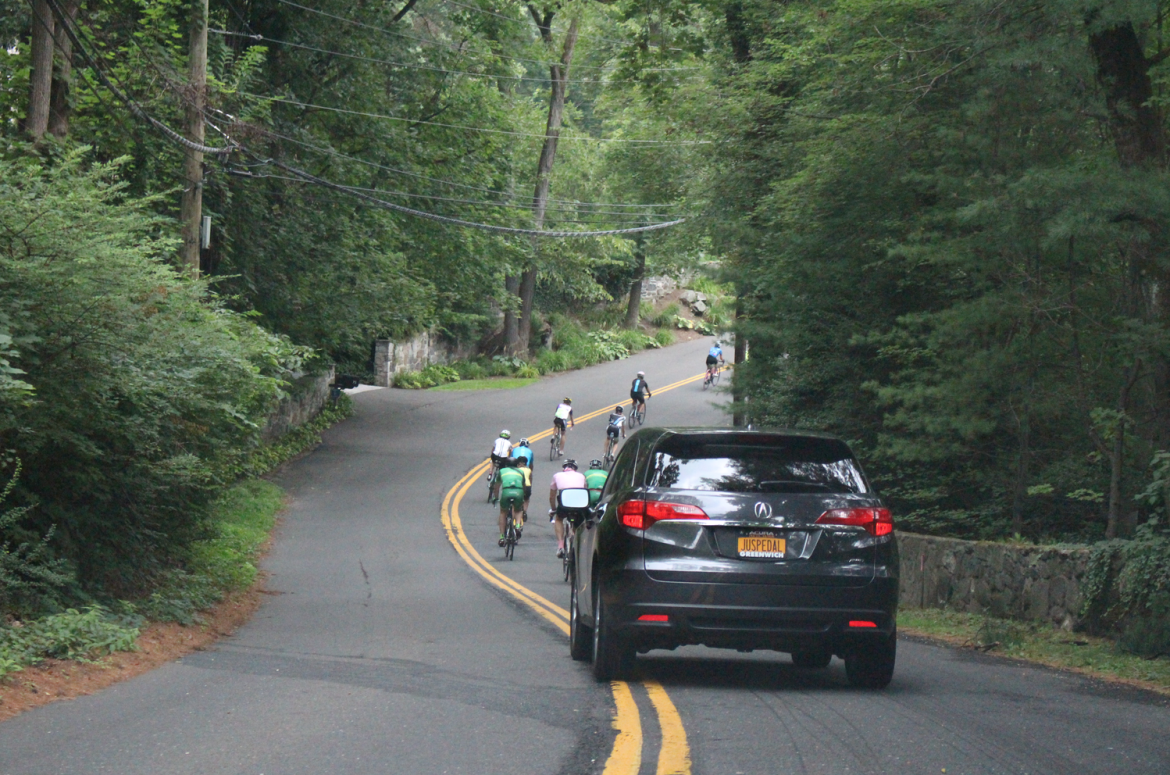 Followed by a supporter, the bike group “Rapha” filled an entire lane of traffic on Pecksland Sunday morning.

A drive along Riversville Road Sunday morning, GFP came upon a group of about 20 bicyclists heading south, and turning onto Pecksland. Following the group as they  continued on to Zacheus Mead Lane, Lake Ave and onto Parsonage, traveling three, four and even five abreast for several miles.

This car was unable to safely pass the bicyclists, though a motorcycle was able to pass. The group did not stop for a single stop sign. 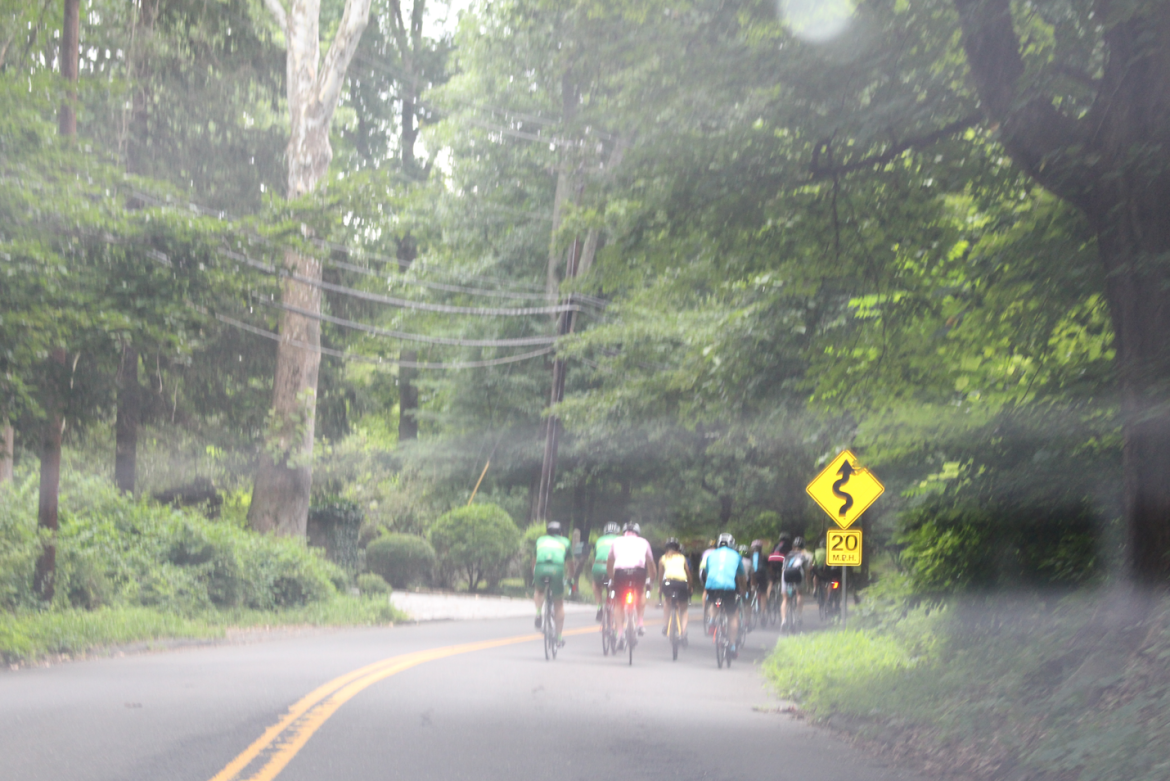 A car affiliated with the group, Rapha cycle club, pulled out from where it was waiting on a side street along Pecksland and followed the pack of bikes. The group cycled between 8 mph and 30 mph, depending on terrain, and the driver followed with hazard lights on for several miles.

On Parsonage, another group of riders, a foursome, headed south on Parsonage in a pack. A Subaru could be seen trying to pass the group, but without many opportunities because the road was windy, was stuck behind them at the light at North Street, and along Fairfield Rd until it turned onto a side street. 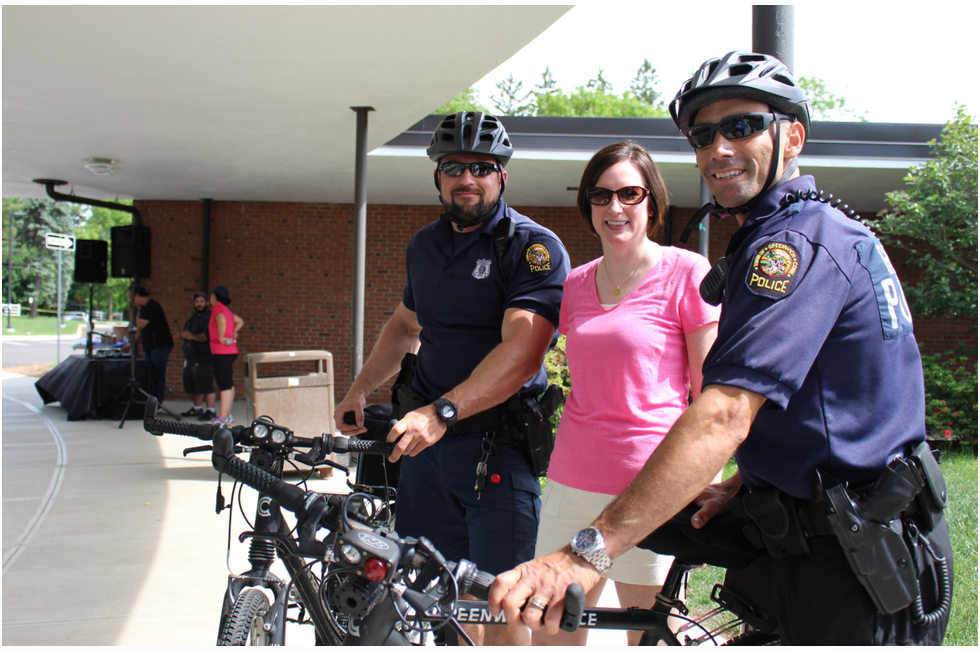 In Greenwich the police participate in a variety of bicycle theme events to promote bike safety, including the Bike Rodeo in June at North Street School. Much of the focus of the bike rodeo was on the importance of helmets and the police gave away free helmets.

Also, the Department of Transportation CT Safe Routes to School program did safety demonstrations with a melon to reinforce the importance of wearing a helmet. 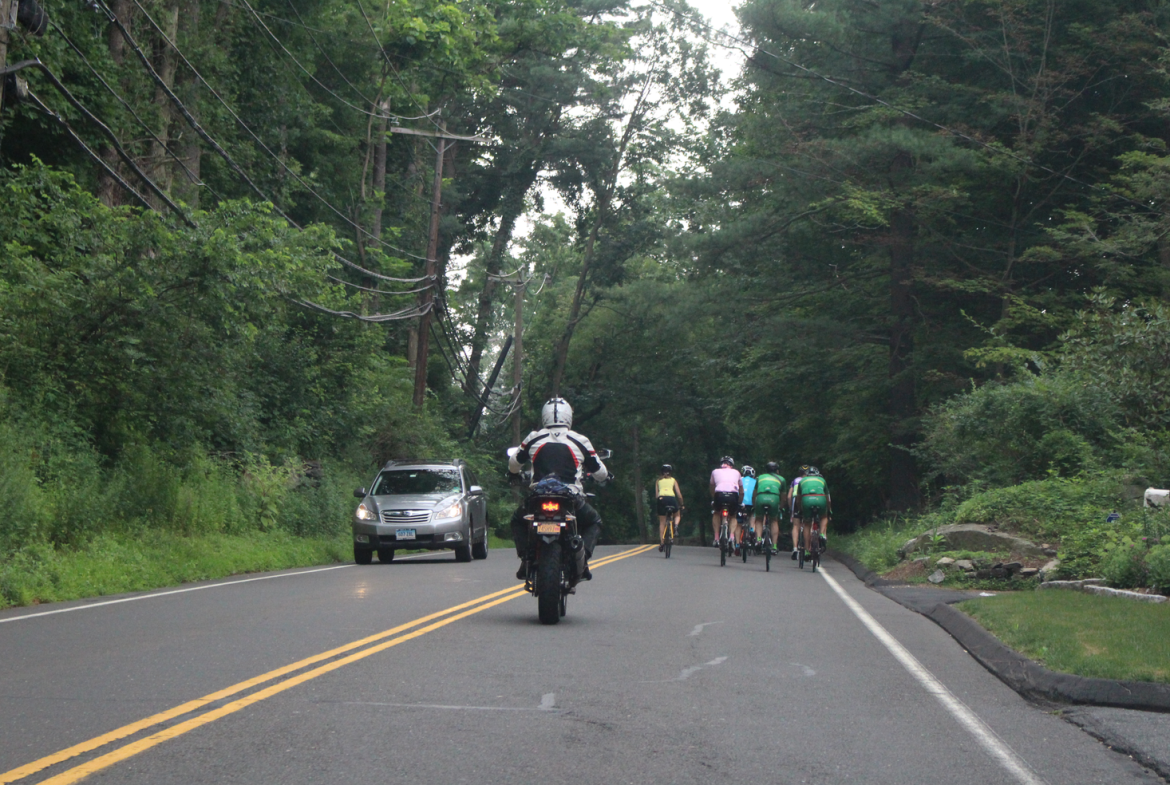 On Zacheus Mead, a motorcycle waited for a chance to pass a group of bicycle riders. Credit: Leslie Yager 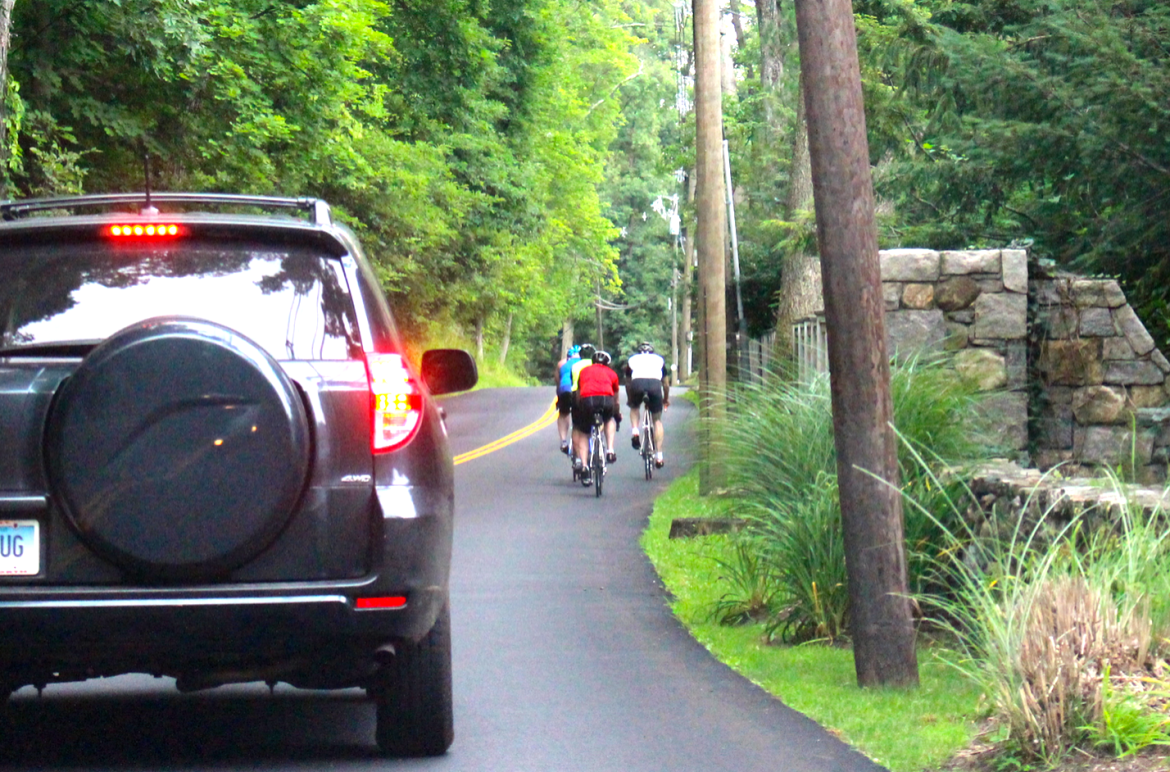 On Parsonage an SUV could not safely pass a group of four bicyclists.