By Karen Frederick and Peter Berg

This article was originally published in October 2018 on the occasion of the 100th anniversary of the death of Edward Elvin Washburn.

At the young age of 29, Washburn was the Greenwich High School football, basketball, and baseball coach, chemistry teacher and chair of the science department. He enlisted in the US Army in July 1918 during WW I and died in October 1918 from the “Spanish Flu,” which killed 50 million people, many more people than all the soldiers and civilians in the war combined.

A plaque commemorating Edward Washburn, found in the basement of the old high school, will be mounted outside the largest classroom in the Science Wing at Greenwich High School. It seems fitting that residents be reminded of Edward Washburn, now that we are in the midst of another world-wide pandemic.

Among the soldiers who should be honored on Memorial Day is Edward Elvin Washburn. In 2006, a custodian found this brass plaque in the basement of a former high school building in Greenwich. The plaque was put on display in the Greenwich High School Media Center with the following information:

…Although it was determined that Mr. Washburn died in military service on October 17, 1918 in Cleveland, Ohio, it has never been established that he was a Greenwich teacher. …The GHS community hopes its placement here might aid in the search for information regarding Mr. Washburn and the provenance of this plaque. At the very least it serves as a memorial of this teacher’s call to duty and his ultimate sacrifice.

A little more than nine years after the plaque was found and 96 years after the death of Edward Elvin Washburn, Peter Berg has uncovered information about this man and his life. 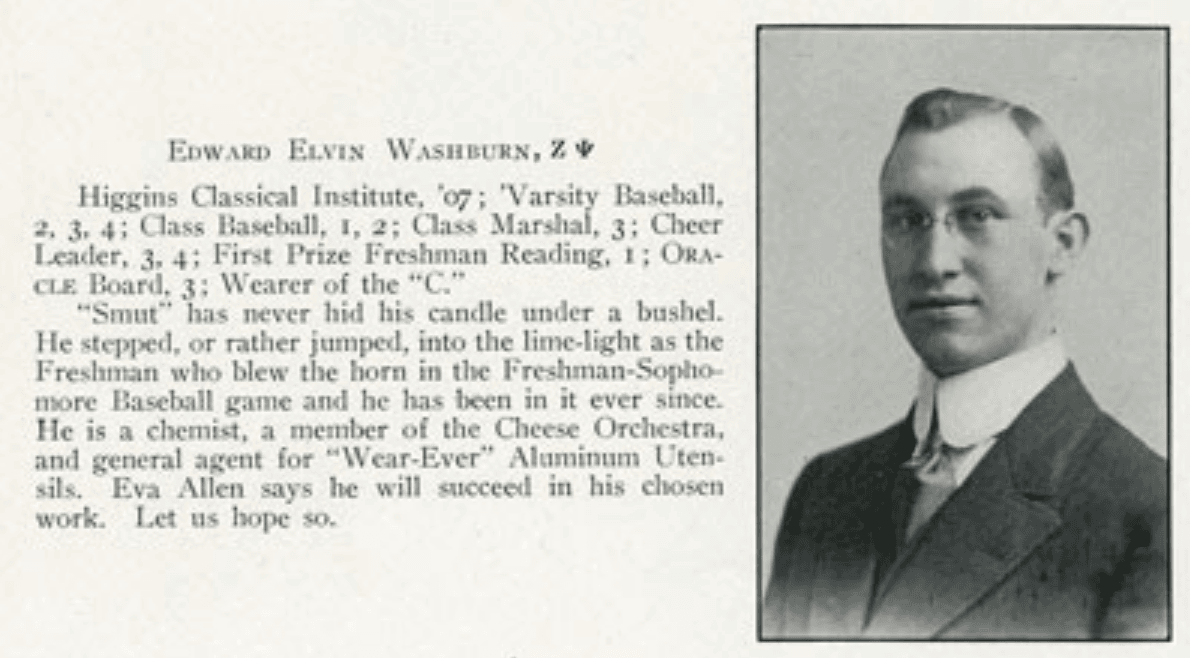 He attended Higgins Classical Institute, a prep school in Charleston affiliated with Colby College, graduating in 1907. He then enrolled in Colby College where he played varsity baseball, was class marshal, cheerleader for two years and on the Oracle Board. He graduated in 1912.

He was hired by Greenwich High School as a chemistry teacher, eventually becoming head of the Science Department. In addition, he coached the boys’ baseball, football and basketball teams as well as being active in the high school dancing class. 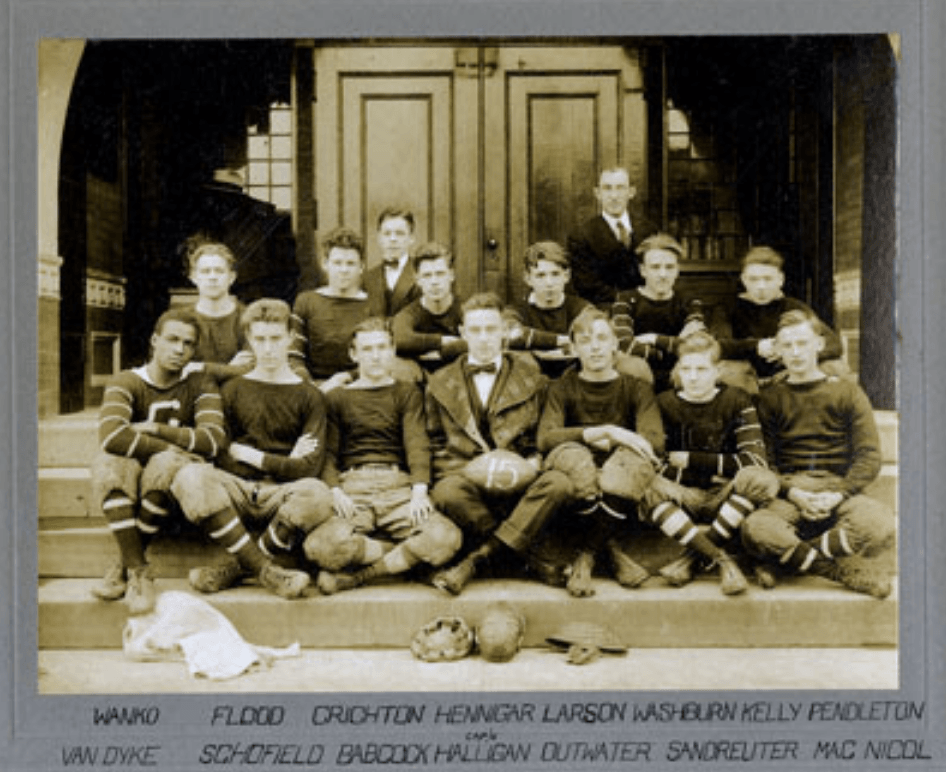 In February 1917, the Connecticut General Assembly directed then-Governor Marcus H. Holcomb “to procure certain information relative to the resources of the State,” especially about “men and materials available for use in the event of war.” This military census, along with Washburn’s State of Connecticut Military Service Record and his registration card, provides more information. He was single and lived at 59 Mason Street. He stood 5’ 8¼” tall, had brown hair and blue eyes, was bald, had a ruptured ligament in his right leg, water on the knee and bad eyes; he did not claim any military exemption from the draft. Under Fraternal Orders, he listed “Masonic and Zeta Psi Fraternity.” Under Previous Military Service or Training, he wrote “Local Greenwich, Conn. state police or home guard.” He could ride a horse, handle a team, drive an automobile, ride a motorcycle, handle a power boat, had a little experience with electrical machinery and was a fair swimmer.

He was inducted as a private into the Army on July 24, 1918, and was assigned to the Chemical Warfare Service (CWS) unit. The CWS was established to develop and produce asphyxiating gases. A secret plant located in Willoughby, Ohio, 20 miles east of Cleveland, was established for its production. This was where Washburn was sent.

The December 20, 1918, edition of the Greenwich News and Graphic reported the official results of the influenza epidemic in Army camps and military centers in the United States. From September 13, the date of the outbreak, to December 1, there had been approximately 17,000 deaths from influenza (“Spanish Flu”) and pneumonia. One of these was Edward Washburn. He died on October 17, at the age of 30, less than a month before the War ended on November 11. Washburn was the first casualty of World War I from central Maine.

On October 25, 1918, the Greenwich News and Graphic printed the following:

Resolved—that the Committee place on record the expression of its deep sorrow for the untimely death of Edward E. Washburn, who was an officient [sic] and loved teacher in the Greenwich High School for three years; who in that brief time had earned the respect and esteem of the community; and who entered with enthusiasm the military service of his country, in which he gave high promise of creditable achievement—a good citizen, a model teacher, a patriotic soldier.”

On December 18, 1918, a service flag containing 118 stars was dedicated at the high school. Of those stars, 117 were blue. There was one gold star for Corporal Edward E. Washburn, “the former head of the Science Department, who died in the service.” Washburn’s name does not appear on a brass plaque at Town Hall, because, although he was a Greenwich resident who died in the military service, he did not die in combat or overseas.

Karen Frederick is the Curator of Collections and Exhibitions Coordinator at the Greenwich Historical Society.

The Greenwich Historical Society thanks Peter Berg for his research on this forgotten soldier.

More information on the Greenwich Historical Society is available online.

Take a Look at the Transformed Greenwich Historical Society Campus