His parents removed to New York when he was but a boy, and at the age of twelve he went aboard his father’s ship as a cook. Thus began a seafaring career that lasted for years. He was married May 19, 1807 (almost 212 years ago to the day) to Miss Sarah Lyon, who was born March 23, 1786, and was the daughter of James and Susan Marvin Lyon. Sarah’s father died when she was young, and her mother soon afterward re-married to James Green (another prominent name in early western Greenwich). Captain Daniel Merritt was the owner of the ships Union and Theodore and sailed them between Greenwich and New York. He retired from the sea, at the age of forty-eight, but he retained ownership in his ships to continue earning a profit from each of their voyages.

Captain Merritt was not a man of extravagant wealth, but he did extremely well for himself and his family. He traveled amongst the well-respected citizens of the middling class. To each of his sons he gave $1,000 – a great deal of money in these times. If any of his sons desired more money, Captain Daniel Merritt loaned them the money on interest. In his politics he was a supporter of the Whig Party.

For those unfamiliar of the term, it was a more moderate off-shoot of the early New England-centered, Federalist Party. And the Whig Party was the predecessor of the Republican Party which formed in 1854 and centered on Capitalism and Liberty – or in other words – entrepreneurship, trade and commerce and the abolition of slavery. The Lyon, Green, Mead and Merritt families were some of the earliest and outspoken proponents and activists of the abolition of slavery. In fact, the Lyon, Merritt and Green families not only were the first families in Greenwich to free their slaves as early as 1800, but many of them shared common ties of blood as well. These were hard-working, fair-minded, good Americans – shadowed by a legacy of being descendants of those who had little option but to settle an unwanted frontier within the early Greenwich colony, on account of their associations and religious beliefs as Quakers, rather than Congregationalists. Yet ironically, the Lyon Family patriarch, Thomas Lyon, Sr., was married to Governor Winthrop’s granddaughter until her death in 1654, after which he remarried Mary Hoyt, daughter of Simeon Hoyt. Thomas Lyon’s letters to the Governor, as well as to the Governor’s son, John Winthrop, Jr., are filled with pleas for help, as a result of both hardship and his wife’s deteriorating health, which eventually took her life. 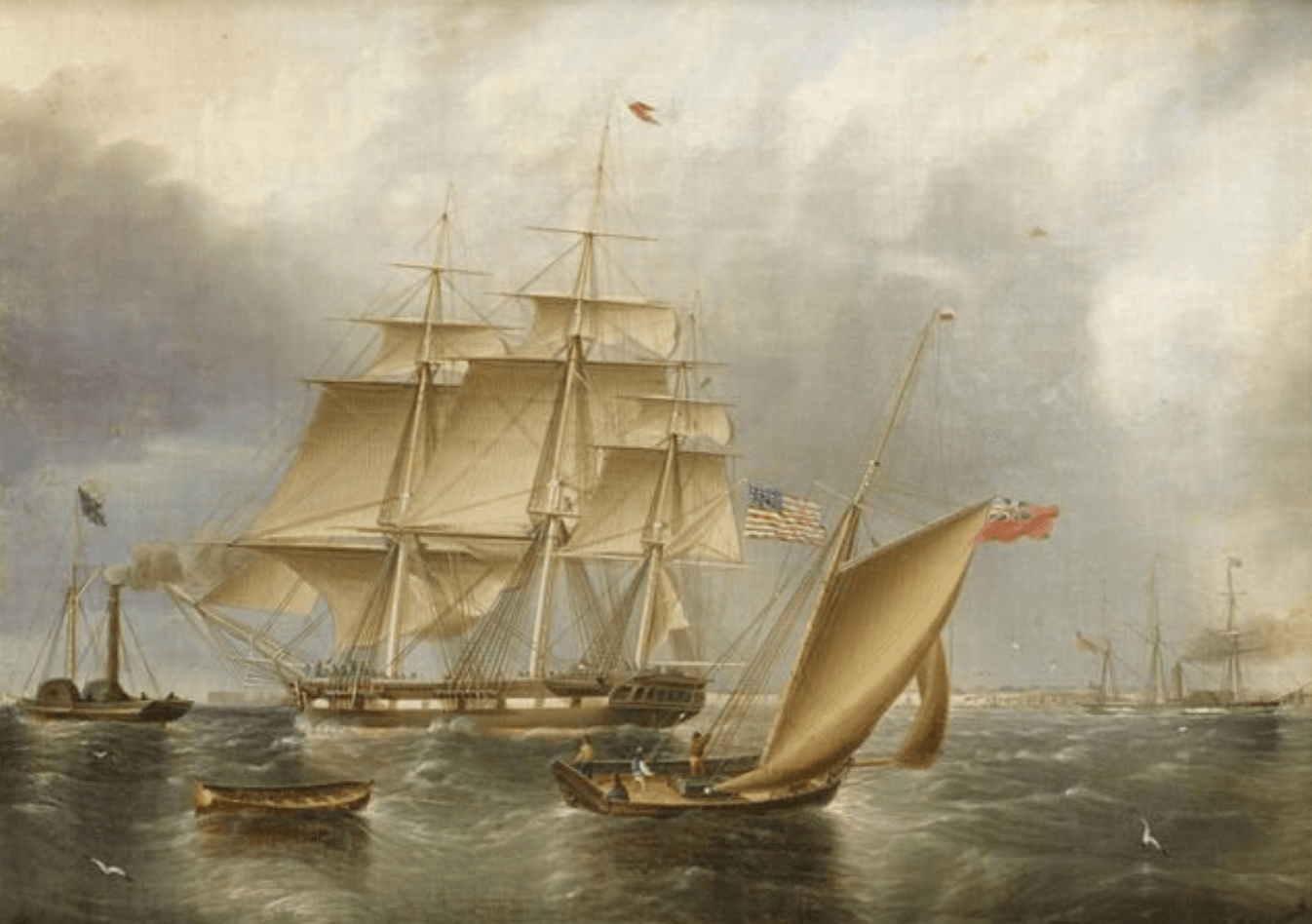 Returning to the immediate subject however, Captain Daniel Merritt was in New York and Connecticut frequently, but ultimately, he removed his family from New York to Greenwich, where he died April 20, 1849. His wife, Sarah Lyon Merritt, died July 8, 1848. The children of Daniel and Sarah Lyon Merritt became active merchants and sailors, and thus continued the family tradition. One of Captain Merritt’s children was Susan Ann Eliza, born February 6, 1814 at Greenwich. She married Edward Mead on December 24, 1832. They lived in the well-known, and still standing white Federalist-style dwelling, on the northerly side of East Putnam Avenue, across from the present-day Mobil and Sonoco gas stations atop the hill before heading west down toward the High School. The house dates to 1832, so as Jeffrey Bingham Mead rightfully speculates, the house was probably a wedding present to the new couple.

Together they had many children, but a notable offspring, that this author wrote about in the Greenwich Free Press in an editorial on September 23, 2018, was Major Daniel Merritt Mead. Daniel Merritt Mead was the namesake of his maternal grandfather, and is well known to the true sons and daughters of this Town.

He was the first formal historian of the Town of Greenwich, a lawyer, a respected son, husband, and citizen, as well as a decorated and brave soldier in the Civil War who fought to preserve and maintain the Union. 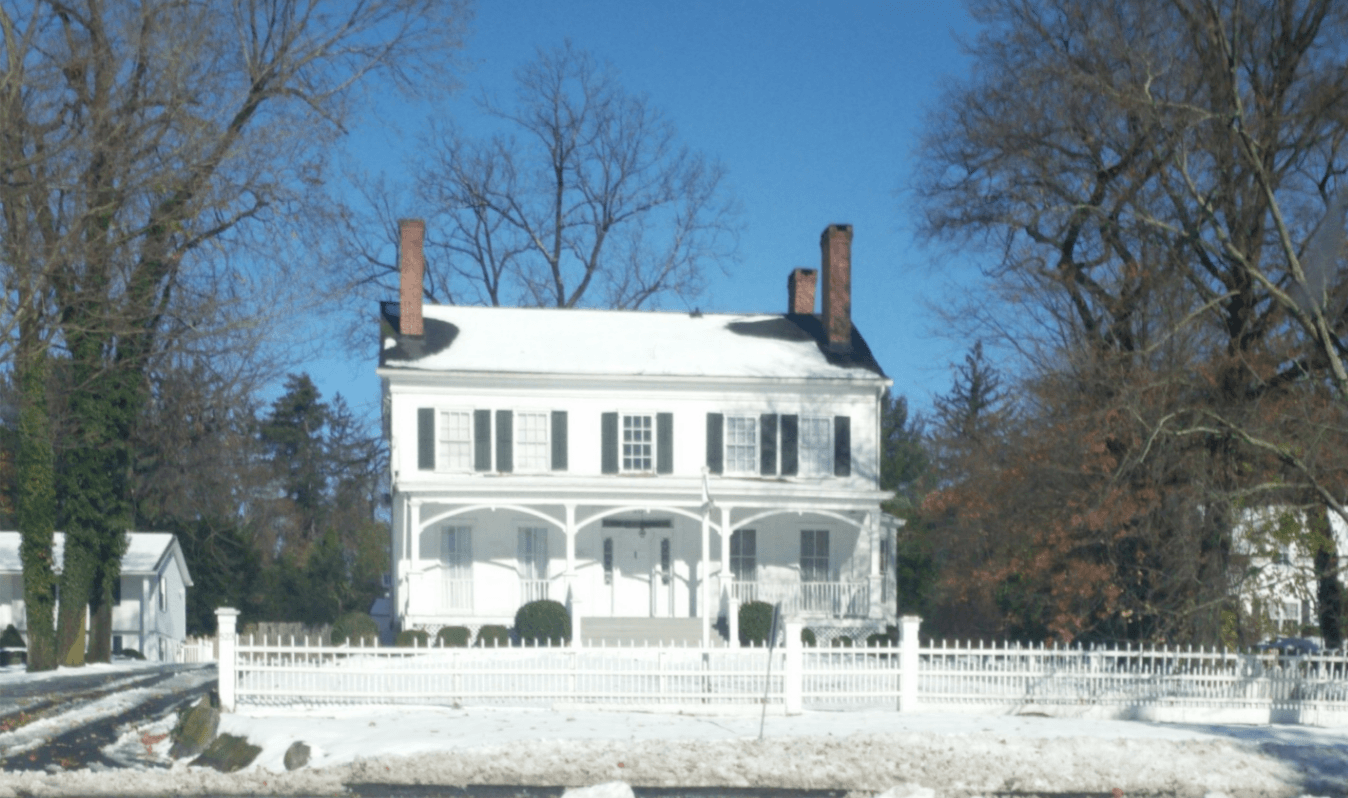 This little morsel of history of the Merritt’s and Mead’s is well enough good, but as history often does – things have come full circle.

In the later part of last year, the author, who is a member of the board of the Greenwich Preservation Trust, as well as the Secretary of the masonic lodge, Acacia No. 85, received word from Jeffrey Bingham Mead that there were two portraits in Orrington, Maine that were of Captain Daniel Merritt and his wife Sarah Lyon.

The Lord knows how the portraits made it up there, yet besides that interesting story, there was a consensus that these pieces of Greenwich history and art be brought back home.

Captain Daniel Merritt’s grandson, Major Daniel Merritt Mead died young, at the age of 28 years. He was the first Junior Warden of Acacia Lodge No. 85. Many of his masonic items are still in possession of the lodge. Therefore, in recognition of his lack of heirs, and in honor of his great commitment and service to Acacia No. 85, and more importantly to the Township of Greenwich, and to the defense of the nation – the lodge voted to procure the funds to bring these portraits of his grandparents back to Greenwich.

The lodge then had them fully restored, and they are currently in the custodianship of the lodge until a more suitable, proper and permanent home can be found for them. 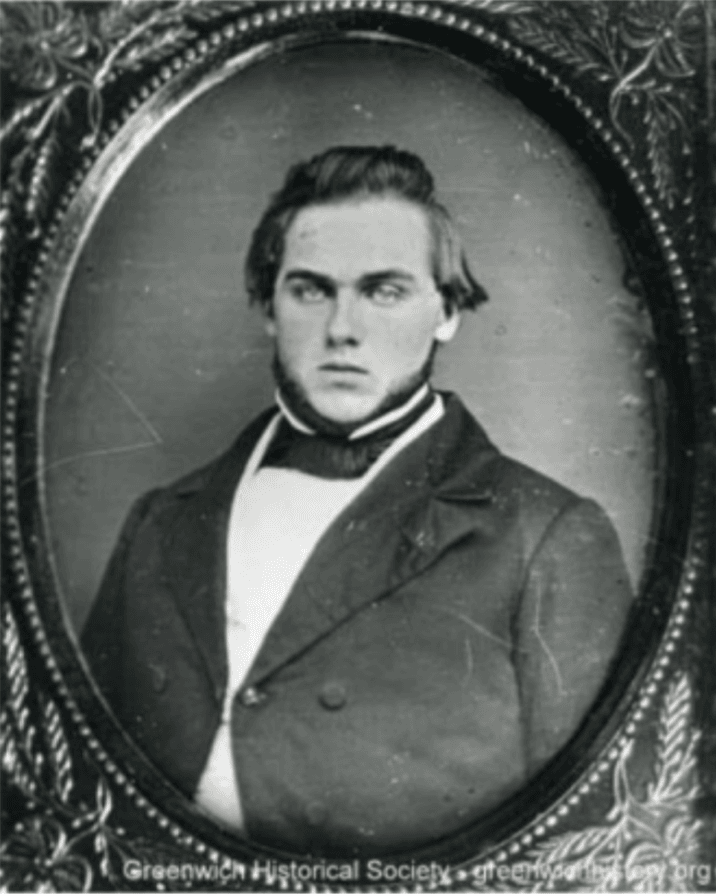 The work was done by a local gallery, and the findings were intriguing. The portraits were not, as originally assumed, oil paintings. They were instead pastel portraits – yet upon further inspection, while there was the clear use of pastels, something did not add up. It almost appeared as if they were photos. Indeed, they were – yet there were two conflicting facts. The frames clearly were in the style of the 1880’s, yet Captain Daniel Merritt and Sarah Lyon Merritt had been dead for decades before that time. Nor did the technology exist at, or before the time of their deaths to create such large photos. What was to be made of this? After careful research and inspection by the art restorer and the author, it was concluded that these portraits were late 19th -century “blow ups” of very early, original daguerreotypes.

The daguerreotype technology was introduced worldwide by 1839, therefore these photos must have been taken in the last years of their life. They both lived only into their early sixties, therefore, these photos were taken on the early side of the 1840’s. Daguerreotype photos were usually very small, and on glass slides or pieces. In the 1840’s and 1850’s these daguerreotypes would not have been able to be enlarged or printed on a different medium, yet by the 1880’s the technology existed. It is therefore presumed that a child of Daniel and Sarah Lyon Merritt found the old glass slides and enlarged them and had them framed. 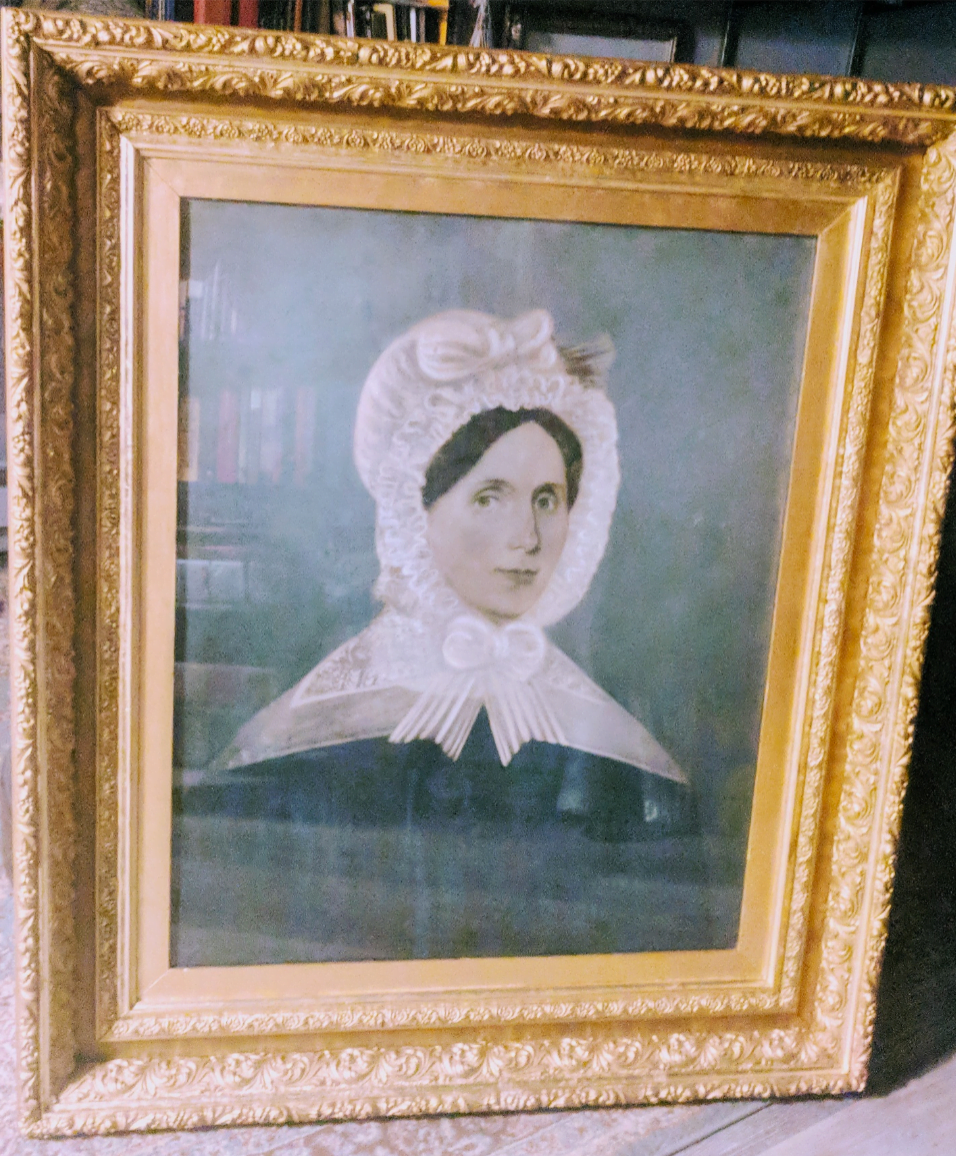 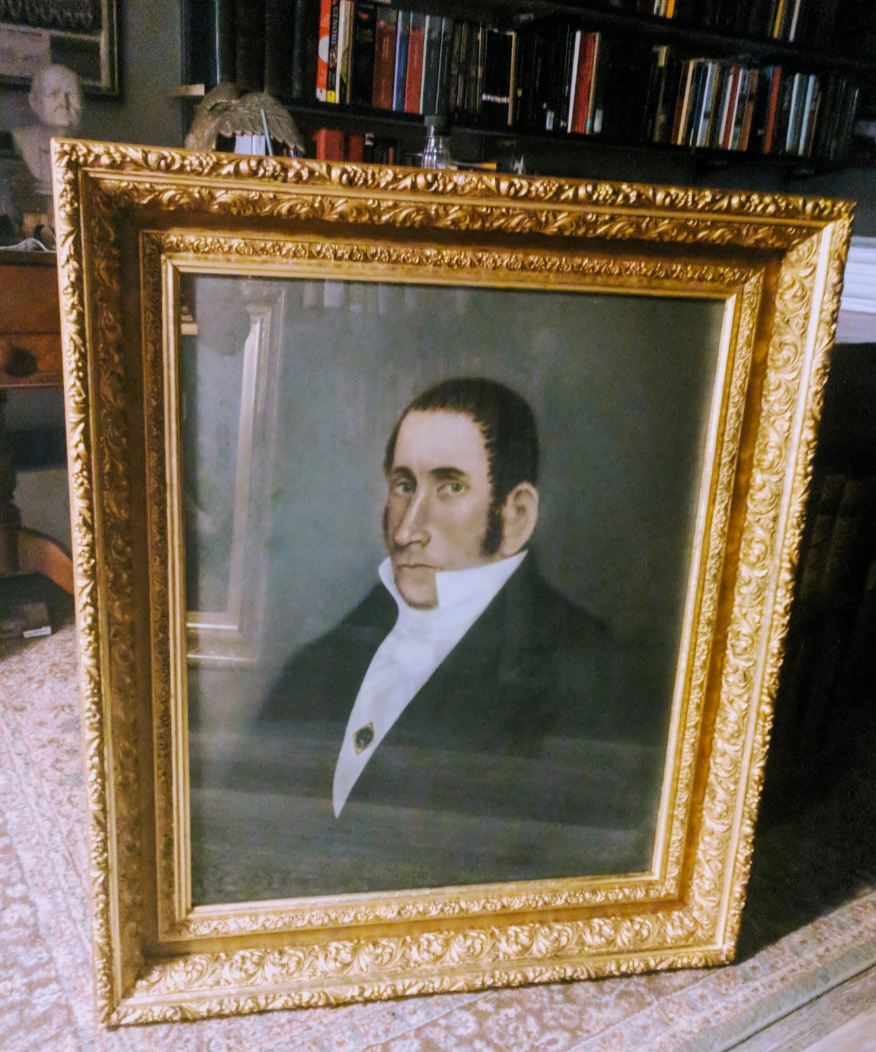 There are, however, a few other things to consider. Firstly, that Susan Ann Eliza Merritt and her husband Edward Mead named their first born child, Daniel Merritt Mead, after Susan’s father. What is more, the frames of the portraits directly coincide with the time period that Edward and Susan A. E. Merritt Mead died (1885 and 1884 respectively). Examining further, Captain Daniel Merritt, with his generosity to his sons, may well have been the one who financed the construction of the newly married couple’s home for his beloved daughter (yet this is merely speculation). Therefore, given this circumstantial evidence and reasoning, the author believes that Edward Mead and Susan Ann Eliza Merritt Mead were given the daguerreotypes after Captain Daniel Merritt and his wife died, especially since their first born was Captain Daniel’s namesake. The photos were kept by the couple their entire life, until, when they died in the mid 1880’s, their surviving children found them and requested that a local photographer/printer enlarge them, and then hired a local person, or perhaps someone within the family, to add pastel highlights to the photo and had them framed in the time period’s traditional, decorative wood frames, gilded in gold leaf. Today, the portraits have been fully cleaned, repaired and restored to their original condition. They are in possession of Acacia Lodge No. 85 and will continue to be so until a good, safe, and proper home is found for them in the town of Greenwich.

Until then, the citizens of this town, should take note on the interesting history of these people, these families, and the sometimes forgotten day-to-day happenings of the early western frontier of Greenwich. They may not have been original settlers, but Greenwich is all the better for having them as an integral part of this town, and its ancient history. 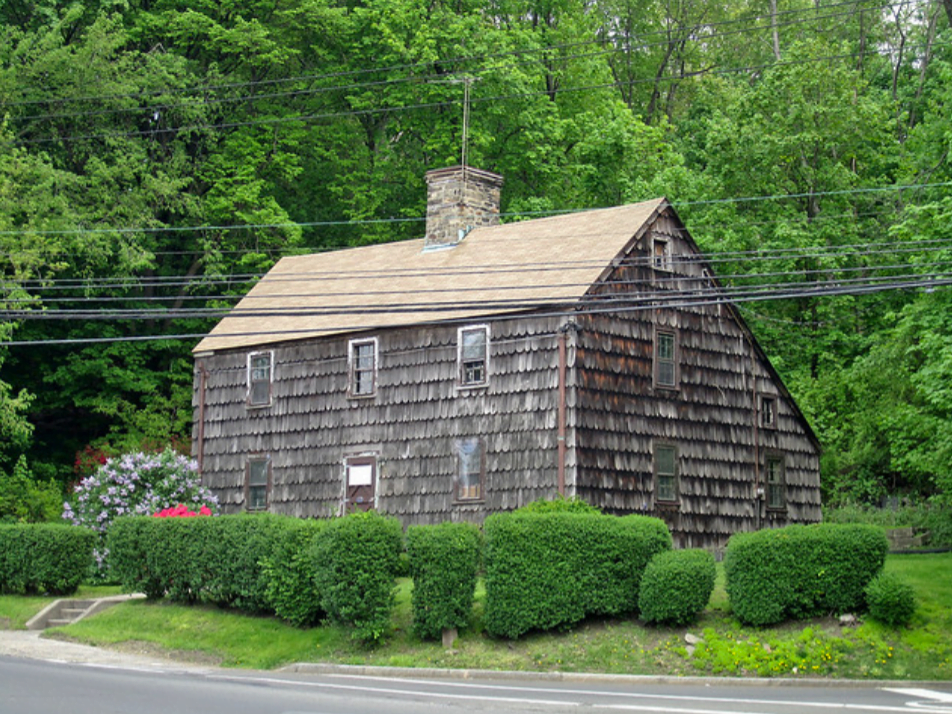 The Thomas Lyon House on the corner of West Putnam Avenue and Sherman Avenue.

The Thomas Lyon House on the corner of West Putnam Avenue and Sherman Avenue. It is in dire need of attention, help and restoration. Please visit the Greenwich Preservation Trust website here to learn more on how to help this house: https://greenwichpreservationtrust.org/