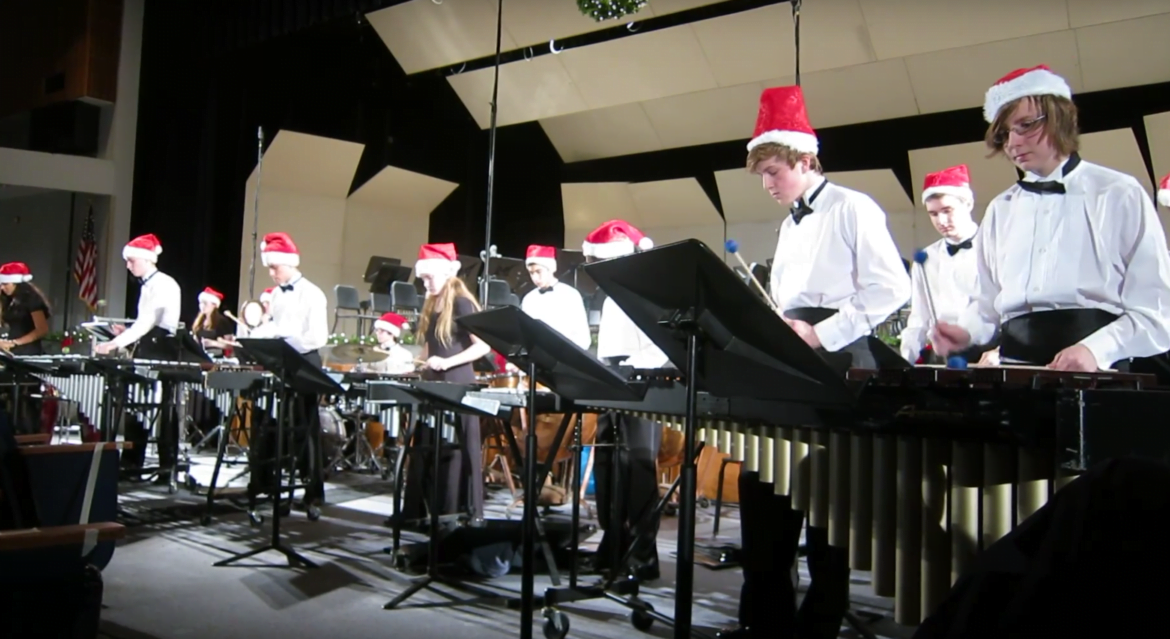 At this busy time of the year….take a break from the hustle and bustle and enjoy fantastic Holiday Music performed by Greenwich High School’s Percussion, Jazz and Wind Ensembles and Jazz Lab, Concert and Symphony Bands. Open to the public and admission is FREE!

The evening will begin with the Percussion Ensemble performing “William Tell Overture” by Gioacchino Rossini (Arr. Murray Houllif). One of the most recognizable music tunes performed with a bit of a different approach. Next the audience will be delighted with their performance of “Holiday Suite” from Season’s Beatings (Arr. Jesse Mattson) including “Deck the Halls”, “Drummer Boy” (adapted from “Carol of the Drum) and “Slay Ride” (adapted from “Sleigh Ride”).

The Jazz Lab Band will perform holiday and jazz classics with a twist. They will begin by performing George and Ira Gershwin’s “Strike up the Band” (Arr. Lisa Despain). This great standard begins quietly then builds and builds. It is sure to have your feet tapping and fingers snapping! The Jazz Lab Band will finish with “Santa’s Coming to Town” by J. Fred Coots (Arr. Carl Strommen).

Next the Jazz Ensemble performs two classic jazz pieces “Riding on a Blue Note” by Duke Ellington and “Go Tell It on the Mountain” (Arr. Alan Baylock). Both these pieces will have the audience wanting to hear more.

After Intermission, the Concert Band will take the stage and perform “Sounds of the Season” (Arr. John Moss) and “Candlelight Carol” by John Ruttter (Arr. Jay Dawson)

The Concert Band will finish its performance with “Santa at the Symphony” (Arr. Mark Williams). These classical themes are mixed into a fun and unique interpretation.

The evening will conclude with the Wind Ensemble’s performance. The Ensemble will begin with fanfare and the classic, “March of the Toys” by Otto Langey and Herbert L. Clarke (Arr. R. Mark Rogers). The next pieces are sweet and calming “Shephard’s Dance” by Gian Carlo Menotti (Arr. Johnnie Vinson), “If Thou Be Near” by Johann Sebastian Bach (Arr. Alfred Reed).

The last piece of the evening will be “Overture to a Winter Festival” by James Curnow. This piece borrows excerpts from some songs and carols that James Curnow developed into a larger, more original statement that captivates the audience.

Take time out, to take-in the sounds of the season, while supporting the Greenwich High School Band Program. It is an evening that is sure to please, you won’t be disappointed with the program!