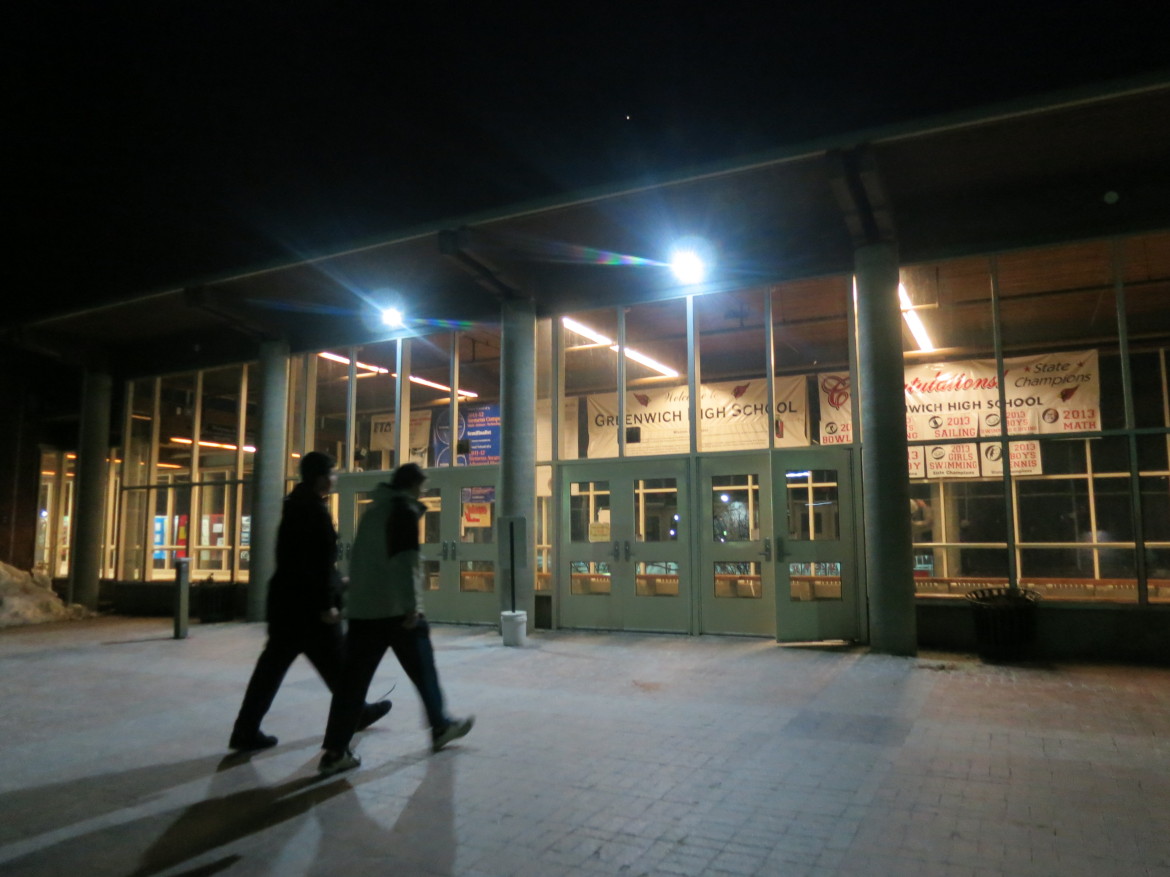 Greenwich High School seniors poked fun at themselves at opening night of SRO, March 7, in what will eventually be known as ‘the old auditorium.’

Interspersed among performances by a live band, orchestra, group dances and the tradition of the boys tossing their shirts into the audience, students spared no one, poking fun at MISA, Dr. Winters, Miss Fox and the power hungry members of the “Bored” of Education. 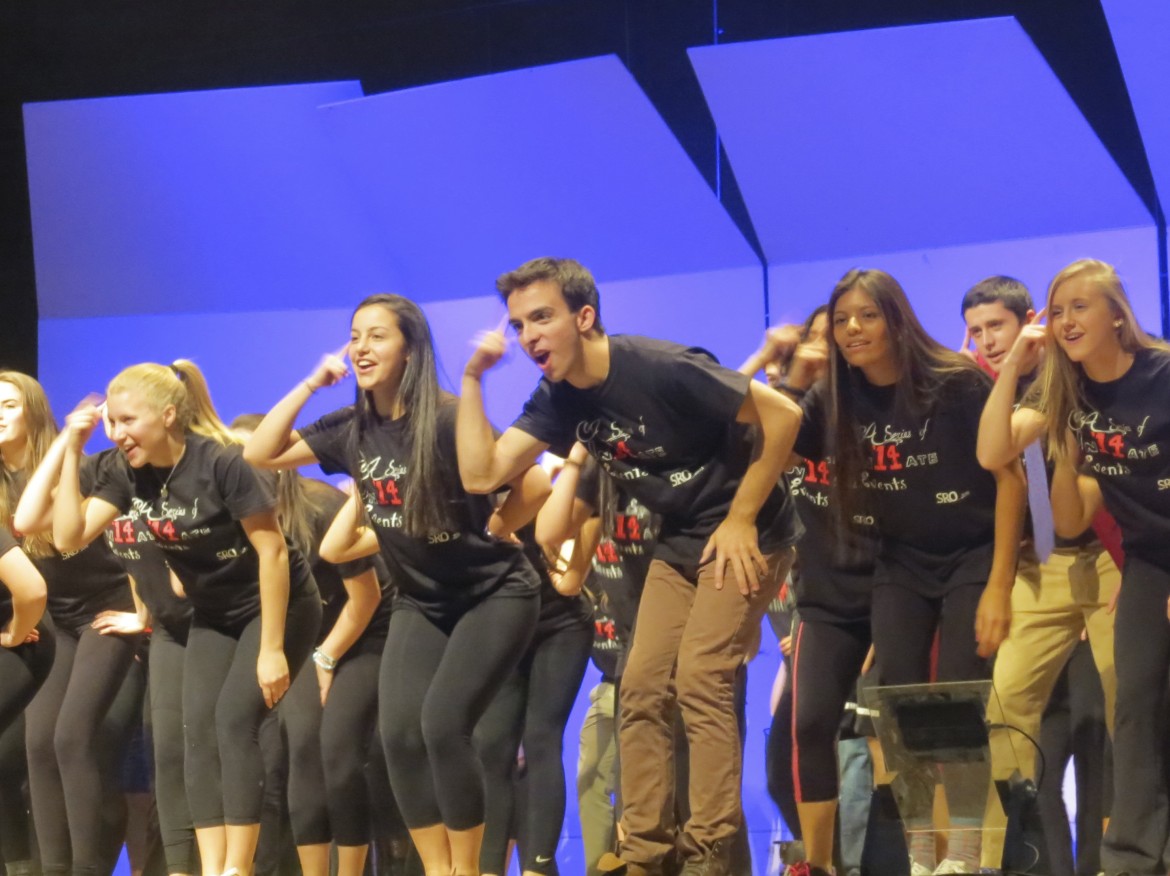 The show, a long-running GHS tradition that was originally called Senior Vaudeville, is a fundraiser for the senior class who will soon be busy planning their prom.

All in good fun, a running joke was student government’s victory in keeping the price of muffins affordable.

Continuing the mix of irreverent humor and straight-laced fun, good kid Chandler LaSorsa’s skit had him dressed as a sketchy bro slinking along GHS’s corridors dressed in a hoodie and sunglasses. 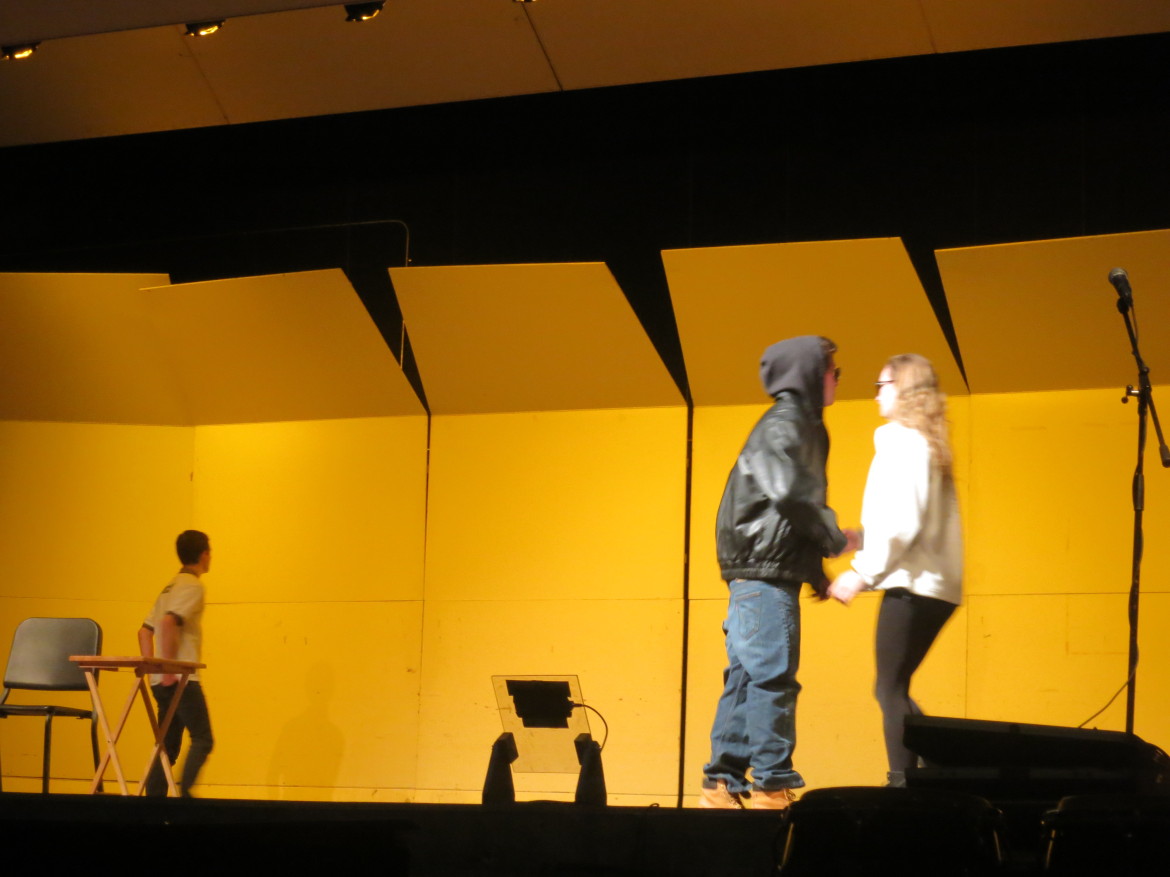 In a riff on Wolf of Wall Street, DeCaprio’s GHS student incarnation masterminded a set of nine straight A-pluses and a 5.25 GPA, much to Dr. Winters’ consternation. 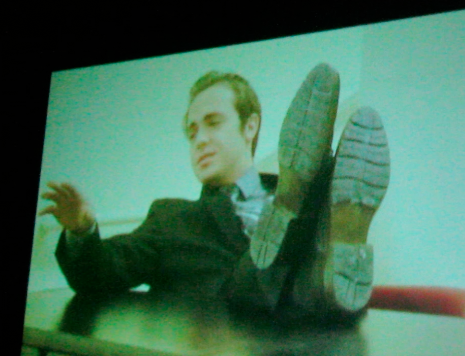 The wolf of GHS insists that his swiftly rising grade trajectory is due to the parking situation keeping him on campus to study more.

Poking fun at the epidemic of senioritis spreading across campus, SRO seniors embraced their disease and its possible correlation to a diet of Rinaldi’s, Corbo’s and Chicken Joe’s.

As SRO’s co-chairs Nick Abbott and Abbie Kramer attempted to contrast class of ’14 with  seniors in past years who “may have focused on negative aspects of our school…” none other than Ron Burgundy interrupted. 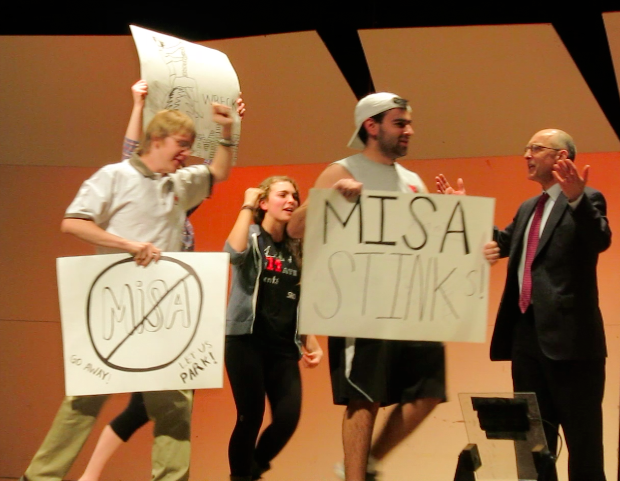 “I can’t listen to you talk about our school like that. These past four years have been a mess,” declared the anchorman in an ill-fitting red  blazer.

“They have been terrible! Problems are literally rising out of the ground. You have toxins in the parking lot. You got MISA. Every year there is another CAPT-tastrophe,” Burgundy complained, dubbing the past four years a series of unfortunate events.

And so the students made light of lost days from snow storms, lack of parking and having to attend school in the midst of a construction site.

All the complaining may have tempted fate. Toward the end of the show, none other than the filthy metallic MISA Monster crashed the party, declaring, “I’m Hungry!” as he attacked Headmaster Winters on stage and then vanishing in a puff of dirt. 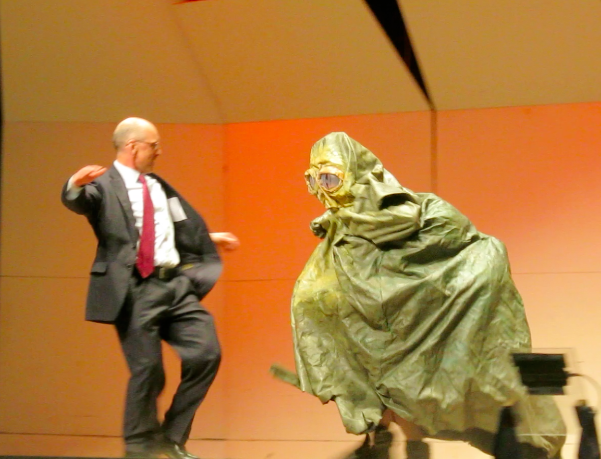 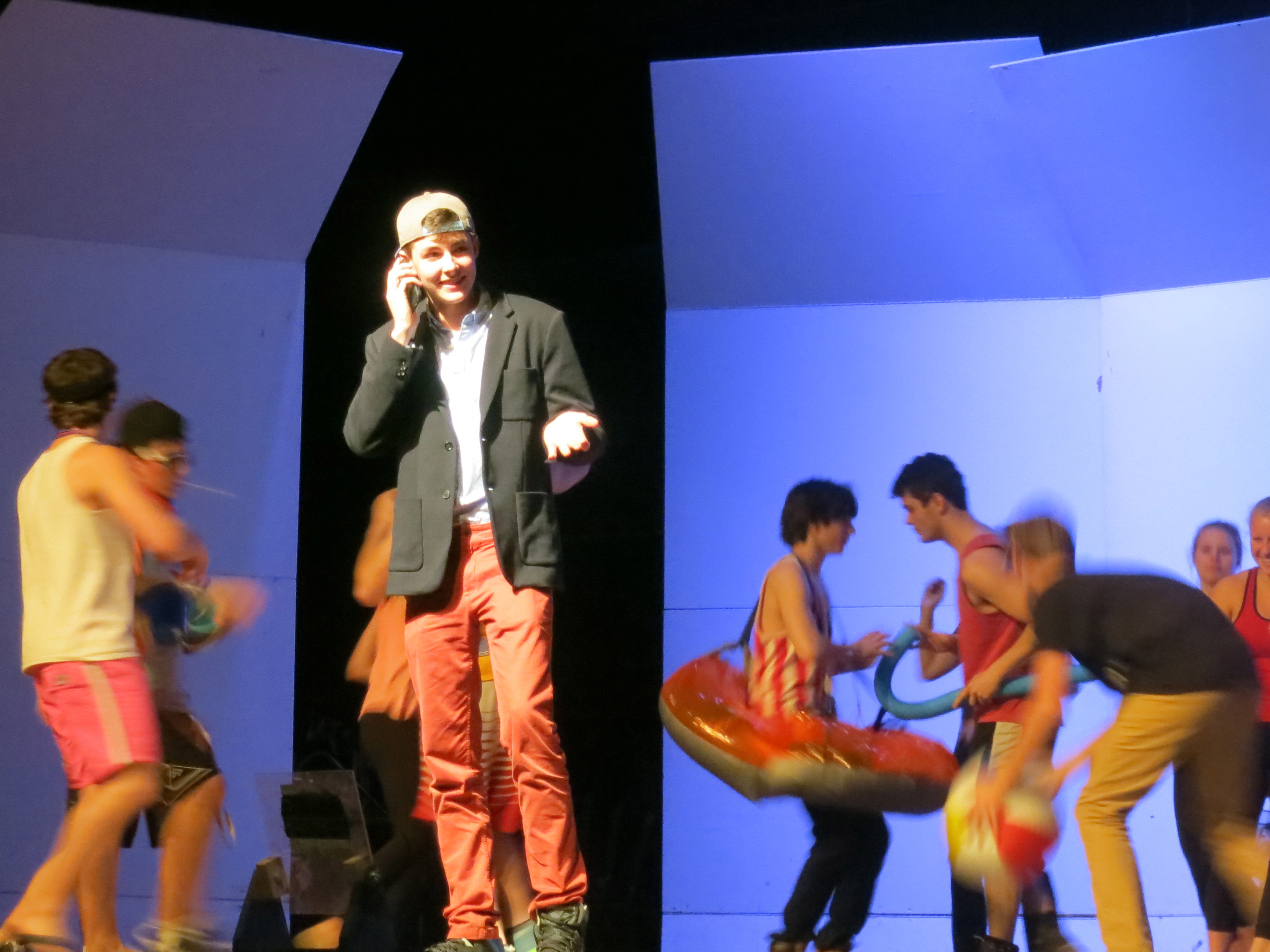 In his quest to produce an excuse to satisfy the attendance lady in what’s otherwise known as “the fine art of calling yourself out,” Ricciardi was foiled time and again by enforcement of the ‘draconian’ policy.  Indeed, the skit illustrated the challenge of playing truant in 2014.

Ever the good sport, Headmaster Winters endured something of a roasting in the skit “10 Things That Scare Dr. Winters.”

Topping of the list of peeves was “Kids not knowing what CARDS stands for.”

Other gripes included Freedom Without Responsibility, the Attendance Policy, the Cardinal Tweets, MISA rebellions, and Snow Days, to which Winters protested, “I don’t even make that decision.”

And despite their references to lack of school spirit and constantly disappointing Student Activities Director “Miss Fox” and her unheeded requests for students to wear red and white, the spirit of the class of ’14 was undeniable.  The students have no doubt made due with a series of unfortunate events. They may even soon find themselves a bit nostalgic for their time at GHS.

Other highlights of the wide and varied talent of GHS seniors were visible in the group dances including Footloose and a salsa dance. 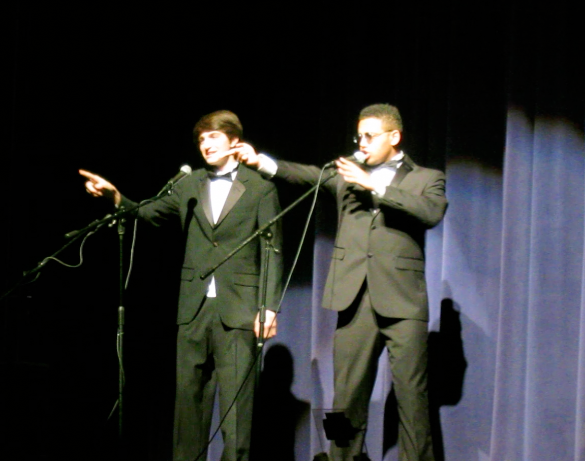 John Clarke and Isaiah Nins performed “My Girl” to a round of applause and whistles.

The T-shirt design and cover art were contributed by Harrison Tune. The Bake sale was coordinated by Megan Bartholomew. Slide show was chaired by Isabeu Valez and program chair was Rachel Ganim. 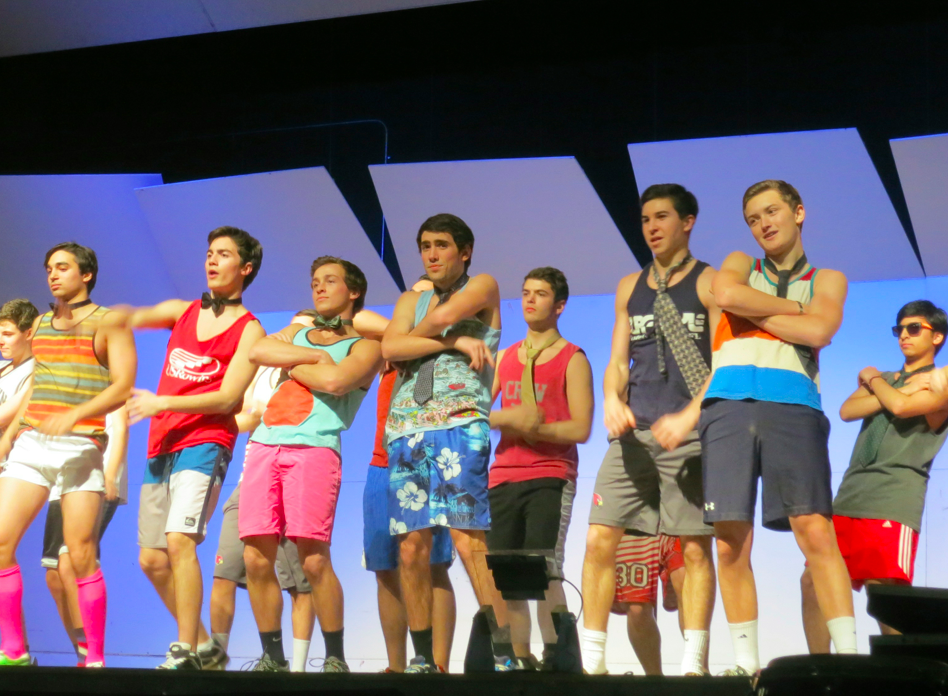 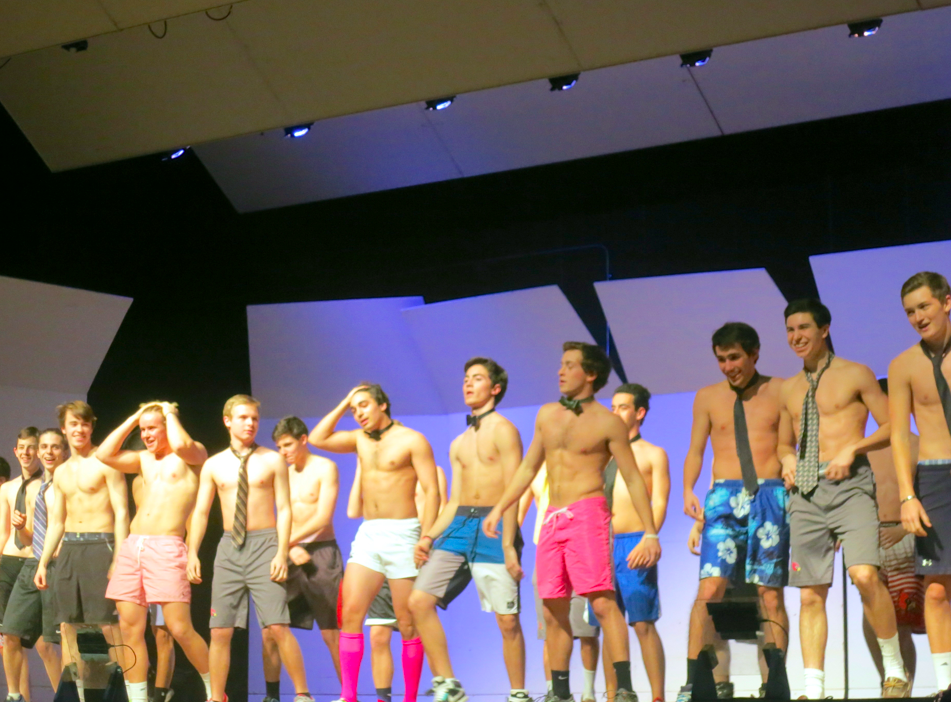 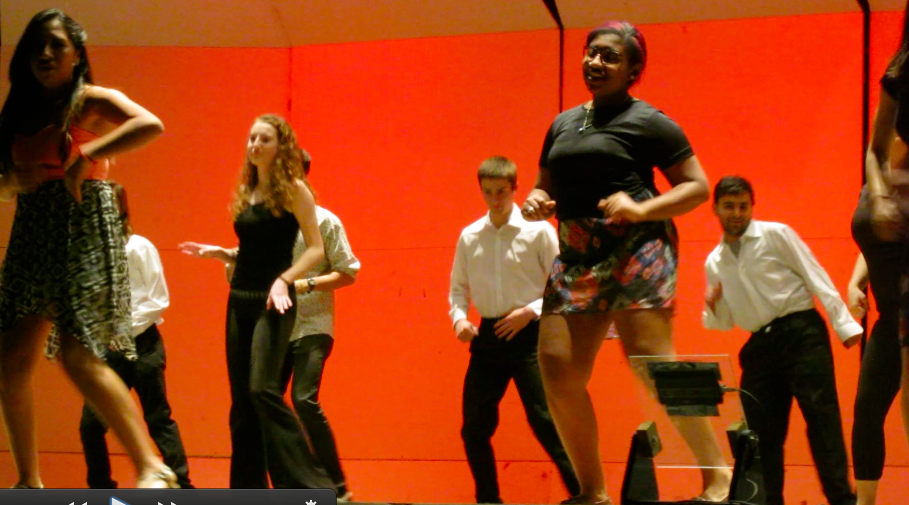 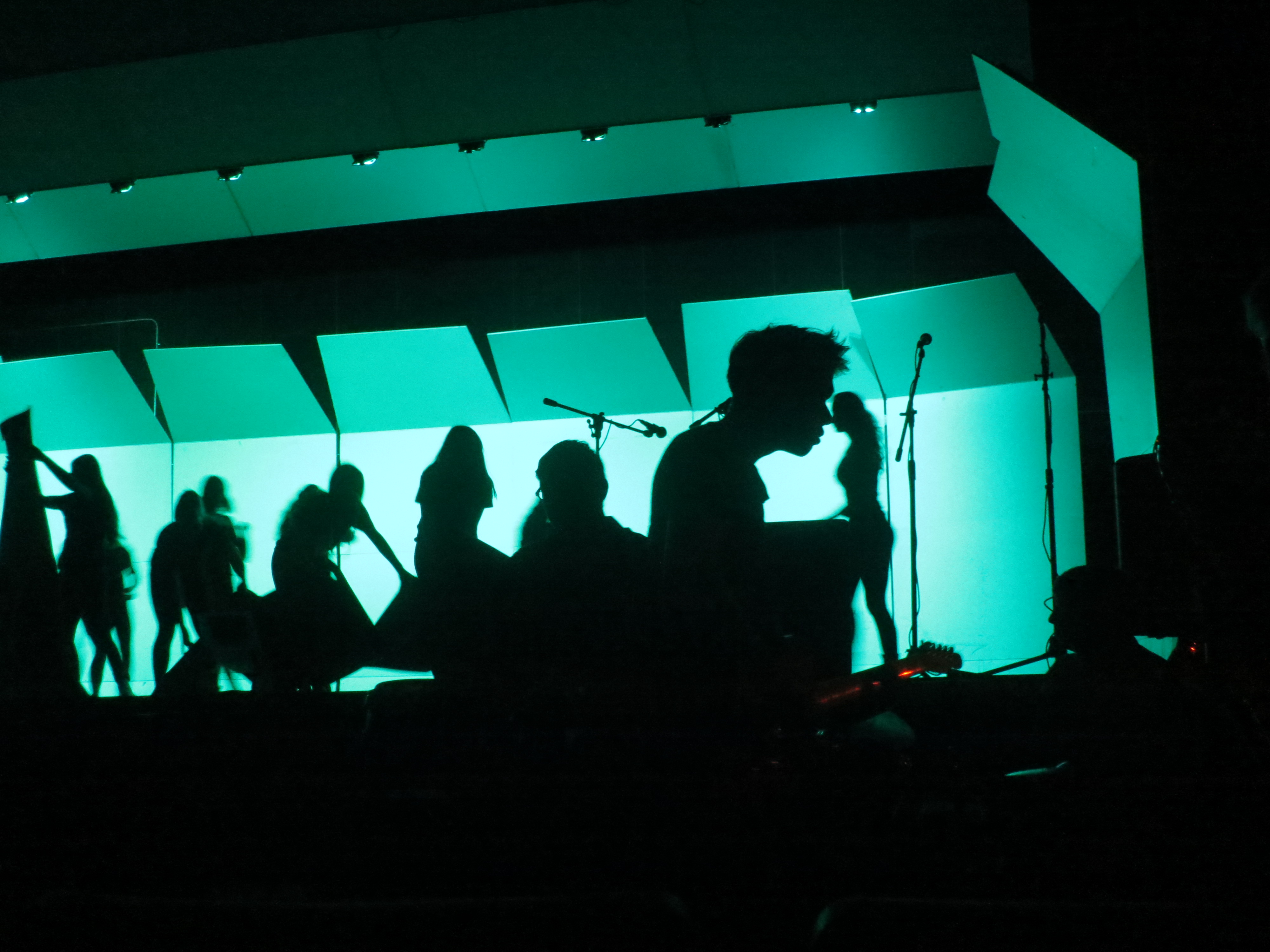 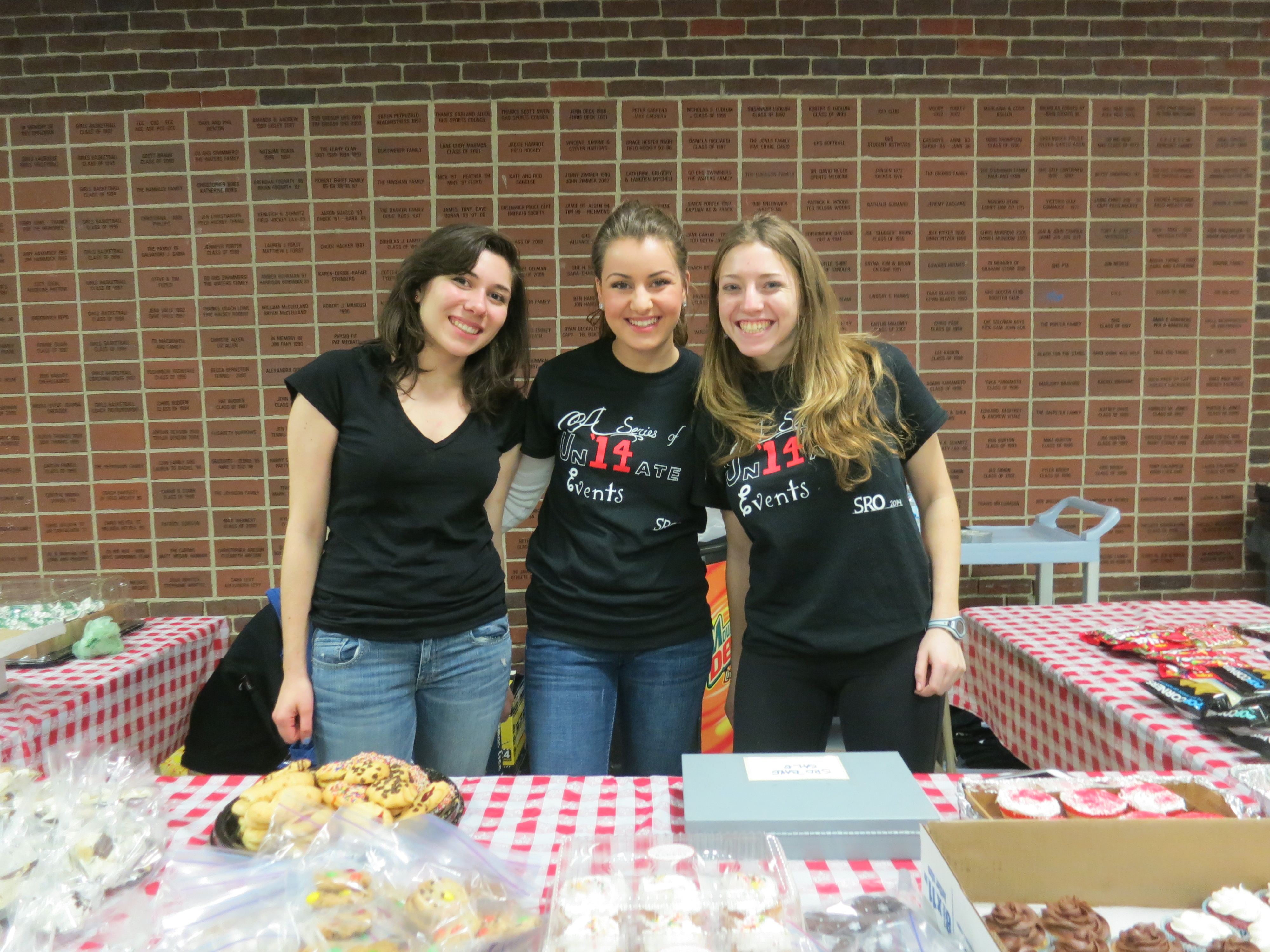 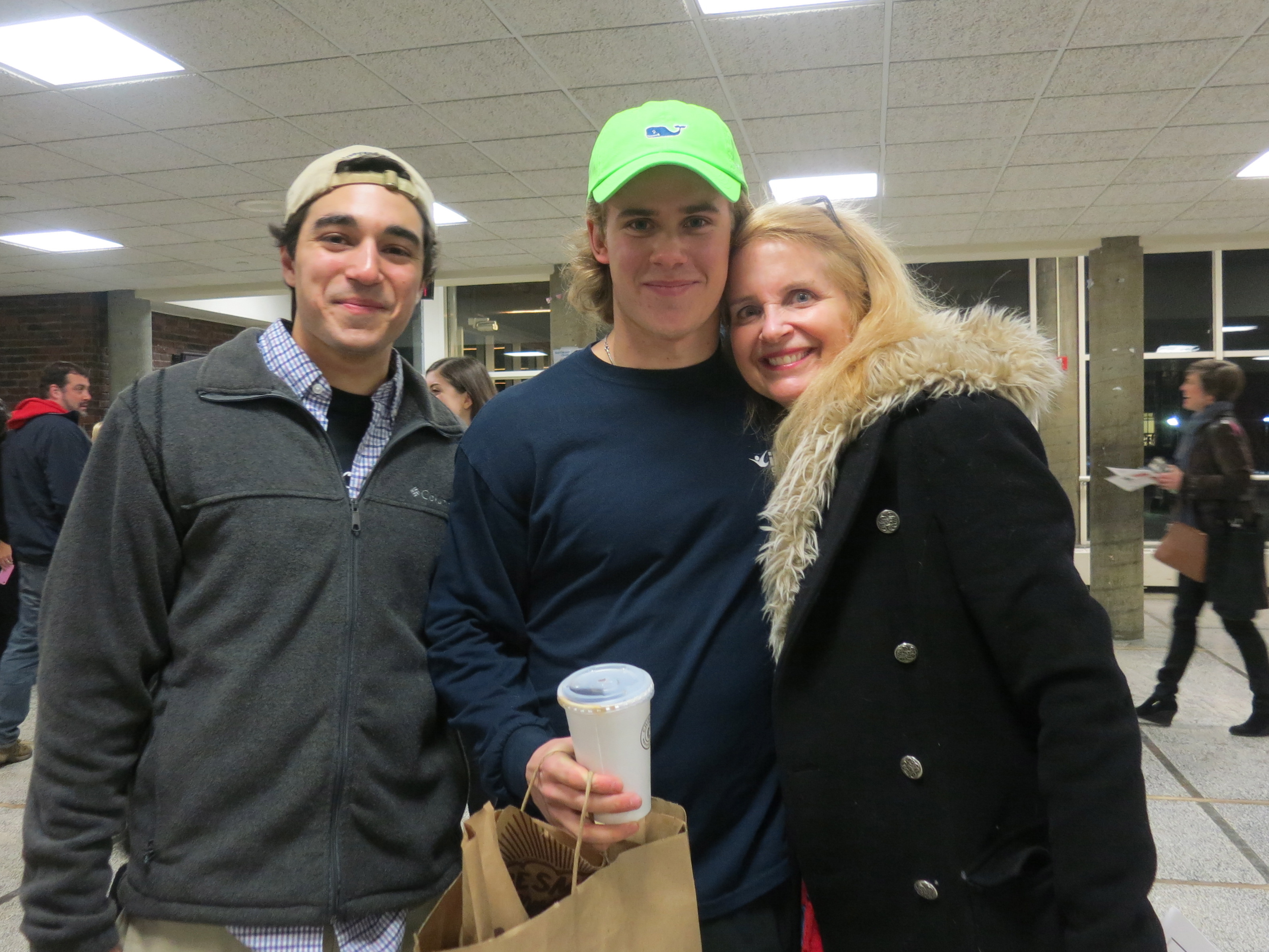 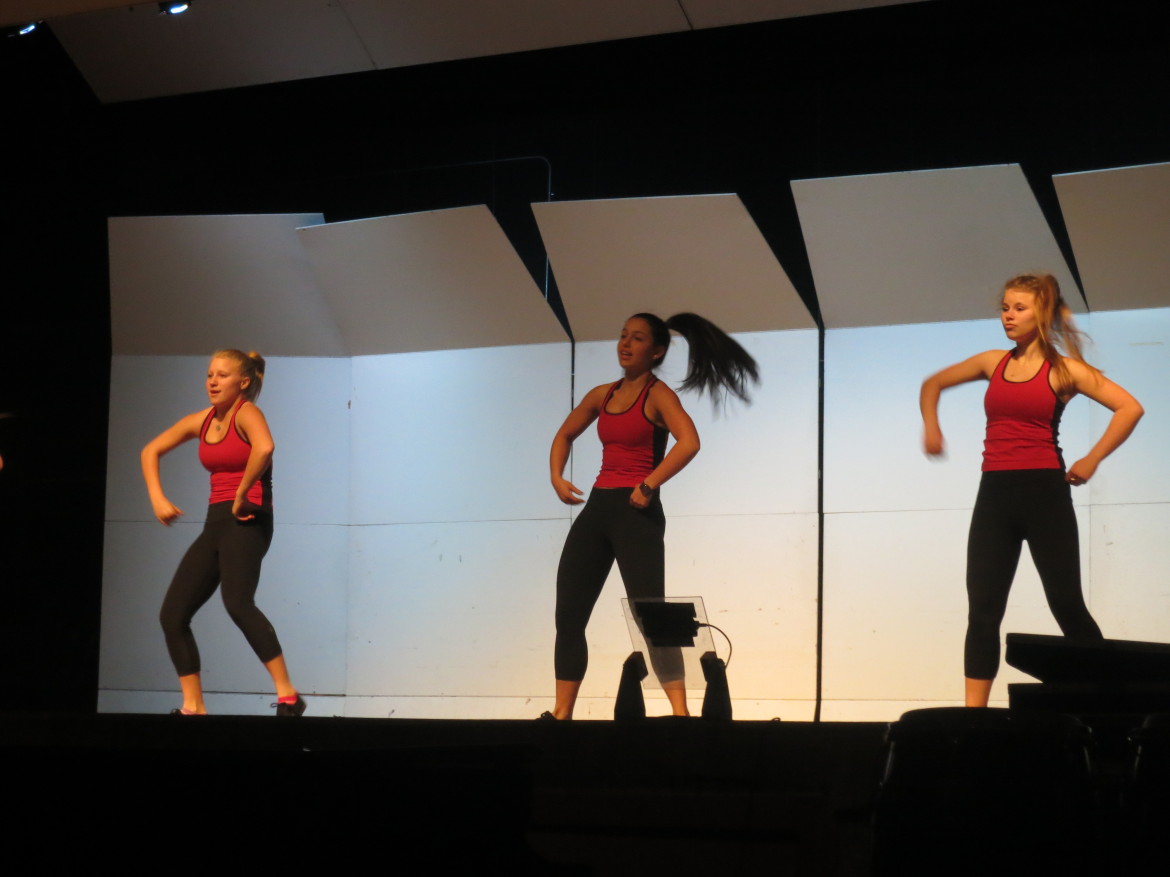