Something special is going on at Western Middle School. Test scores have shot up and enrollment is burgeoning.

There may be no magic behind the story, but there may be a secret sauce.

Beinstein, in his fifth year as Principal at Western, said he’s had the opportunity, due to normal turnover, to hire 40 of the 65 the teachers on staff, and he selects those willing to go the extra mile.

While some public schools are shrinking, that is not the case at Western. In 2013-14 enrollment was at 509. Enrollment for the upcoming year is projected to rise to 633.

Beinstein attributes the increase to fewer Parkway School and Glenville School students heading off to private schools for 6th grade.

At Parkway, where rising 6th graders are split between Central and Western, there was a time when many districted for Western would opt for private school. That is not so today. Beinstein estimated that 100% of the Parkway students head straight to Western.

In fact, Beinstein said a significant number of students who try private middle school do a U-turn, and wind up at Western.

“We have about a dozen who have come back from private schools,” he said. Why? Parents cite wanting their kids to have a public middle school experience before entering Greenwich High School. Others make the move because they seek the more diversity and  appreciate Western’s outstanding staff.

According to Beinstein, Western Middle School students are better equipped for Greenwich High School because they are accustomed to diversity, both racial and economic.

Having dedicated decades to the impressionable middle school age group, Beinstein there is a sense of urgency in middle school. 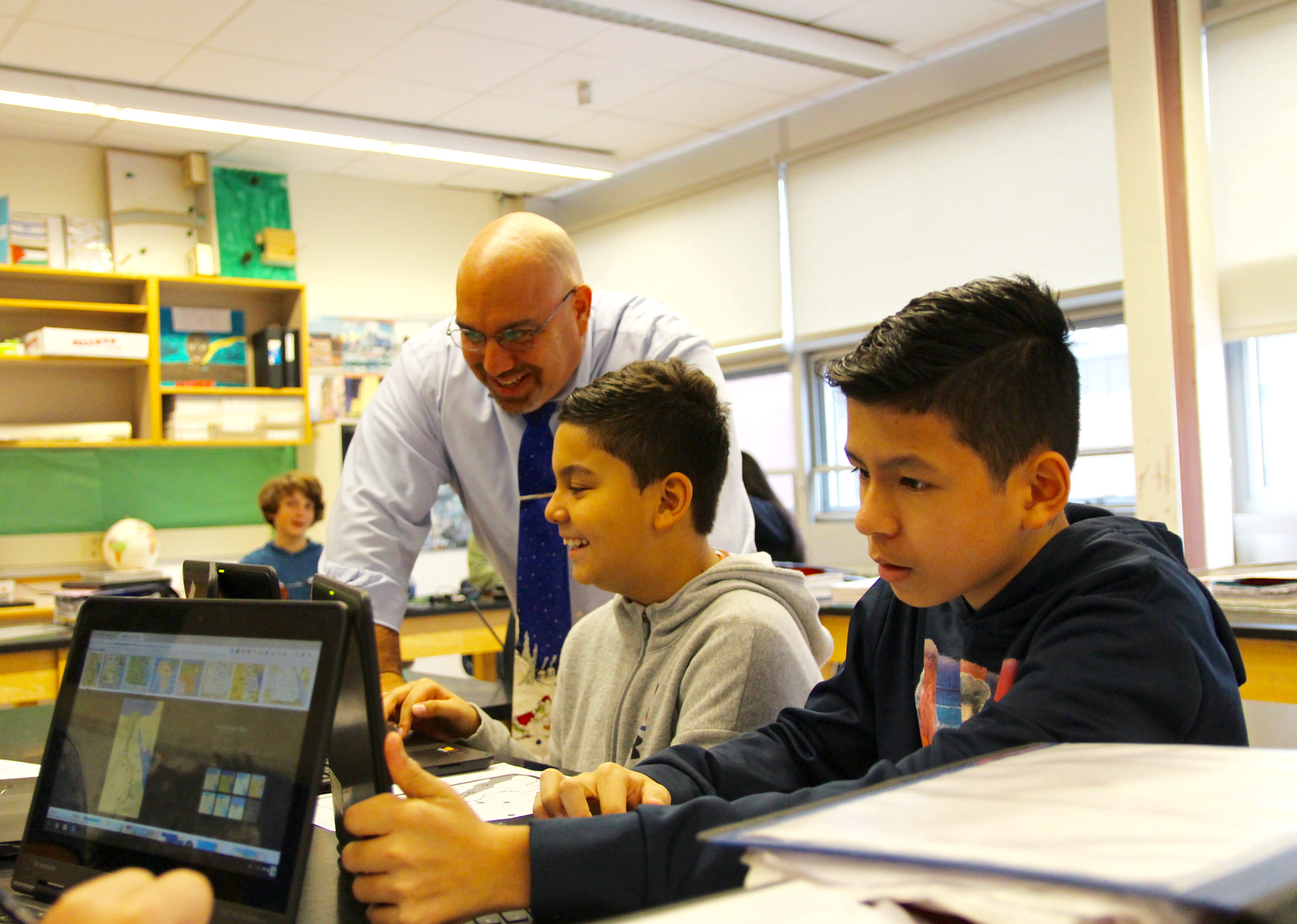 “We only have three years to get them ready for high school. Greenwich High School can be a tough place if they’re not prepared. We have to work fast,” he said. “We bend over backwards for our kids.”

Western students, who are approximately 50% Latino, come from families that hail predominantly from Central America, and the students tend to be the first generation to attend American schools.

Beinstein refutes the idea that the west side of town and, Western in particular, with its significant Latino population and high number of students in need – about 40% of students are on free or reduced lunch – correlates to lower performance or lower expectations.

Beinstein said the suggestion that a concentration of children with needs will take the focus off others is dead wrong.

“If you come in to middle school ready, you will get stronger,” Beinstein said. “Kids who come in on-level will leave here advanced.”

“It’s a misperception that kids who are not ‘high need’ are left behind,” Beinstein said. “That is simply not accurate. Students leave here well prepared for high school. They’re ready for whatever level course they get into.”

The test scores bear out Beinstein’s claims. Among the GHS class of 2021, who were tracked through their years at Western, there was a 50% increase in students at goal. (On the SBA, in English Language Arts, the number deemed proficient rose from 53% in 6th grade to 75% in 8th grade.) 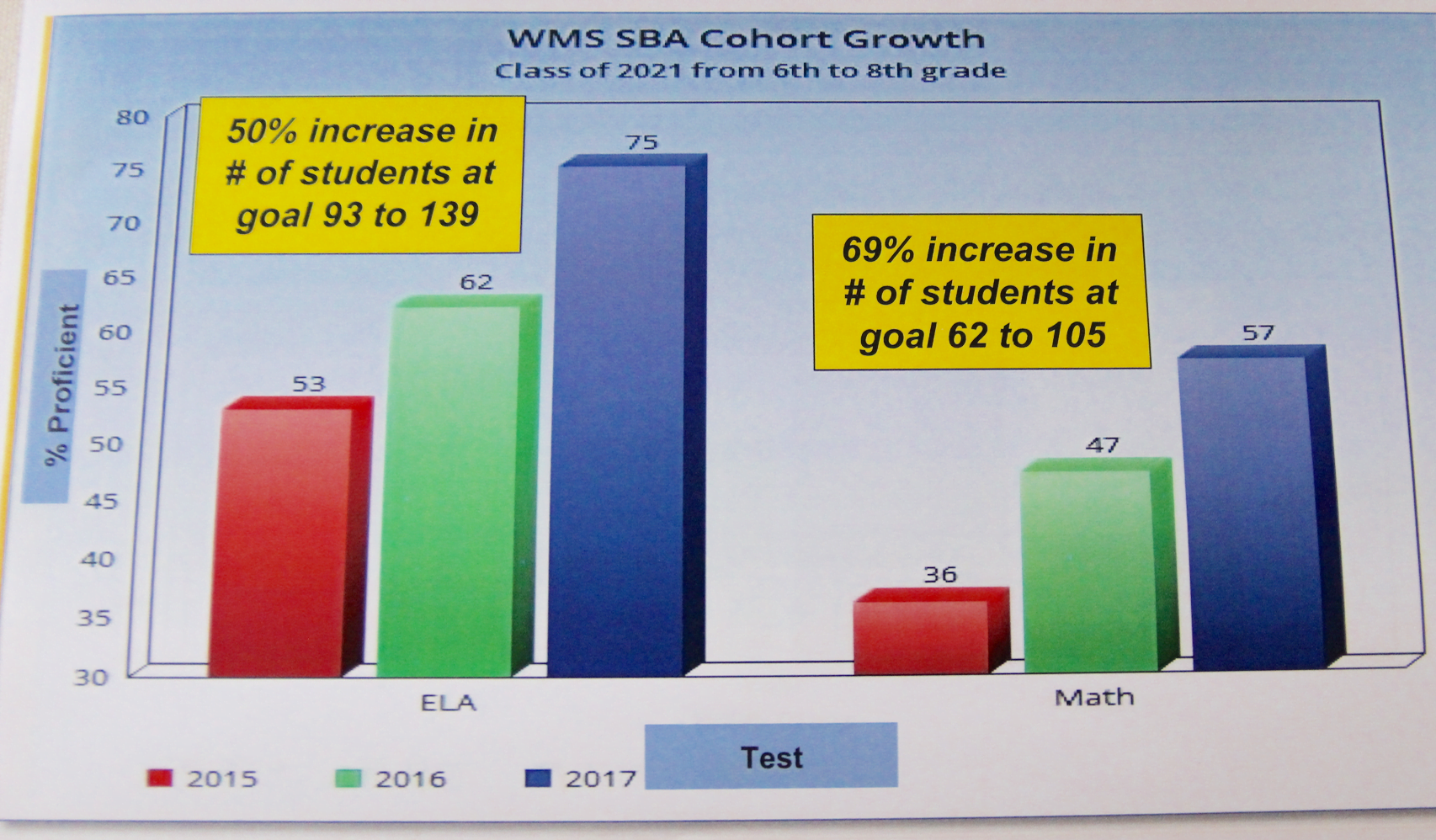 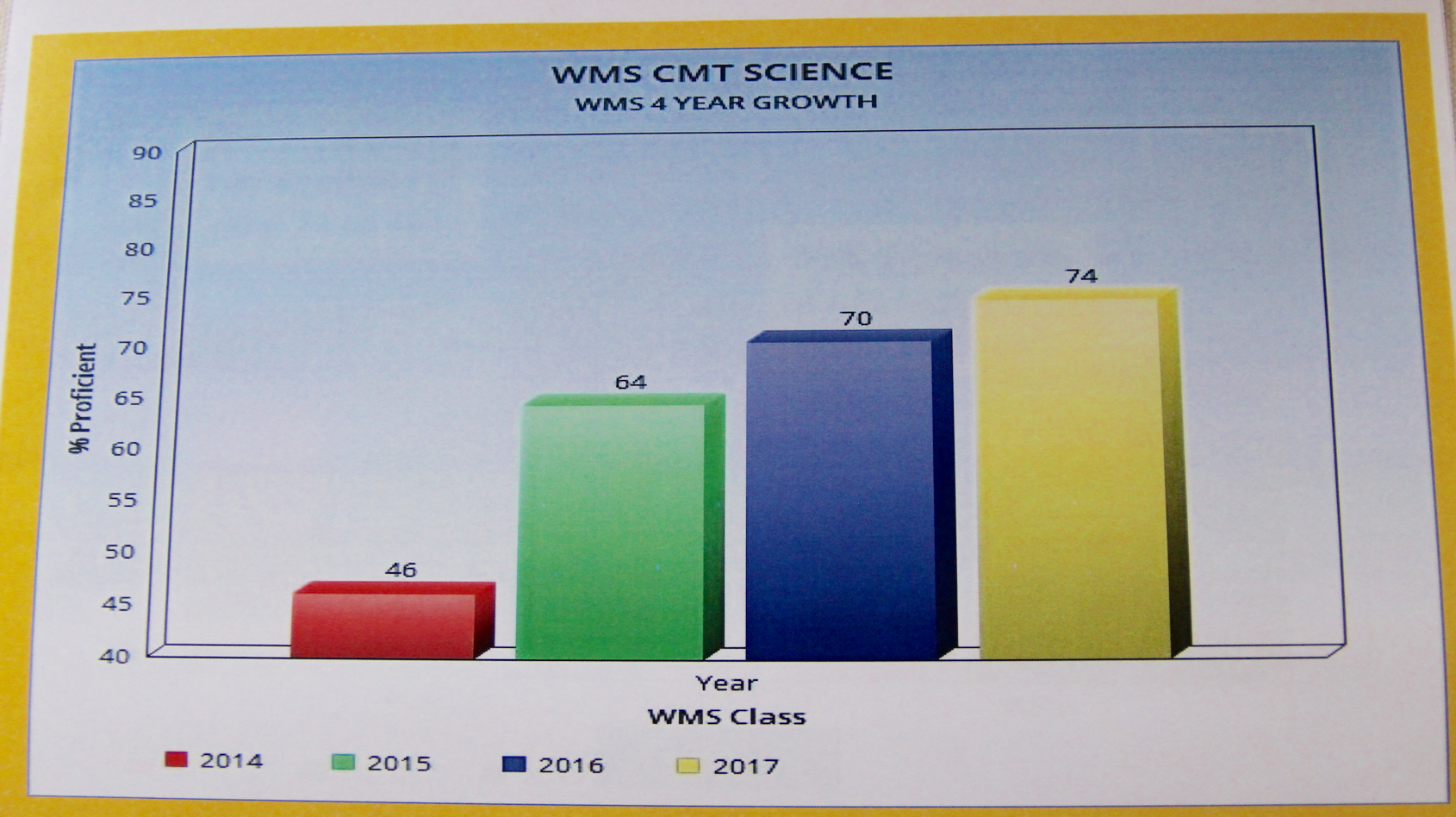 Beinstein said the increase reflects the acknowledgement that one method of teaching doesn’t fit all students. He credits staff for knowing and caring about every child, and surveys of parents bear that out.

In survey results, 96.5% of parents strongly agreed that staff know about and care about their child.

In selecting his hires, Beinstein looks for people vested in the students, not just a paycheck. “I’ve never worked with a better staff,” he said. “They come early and stay late.”

“You don’t accept a child’s first effort as done. ‘I’m Done!'” he said, mimicking a student who rushed through an assignment. “No, we want it to be done well.”

Acknowledging the number of students in need, Beinstein said, “The achievement gap is an economic gap.” He said some students simply don’t have access to opportunities and resources that others do. 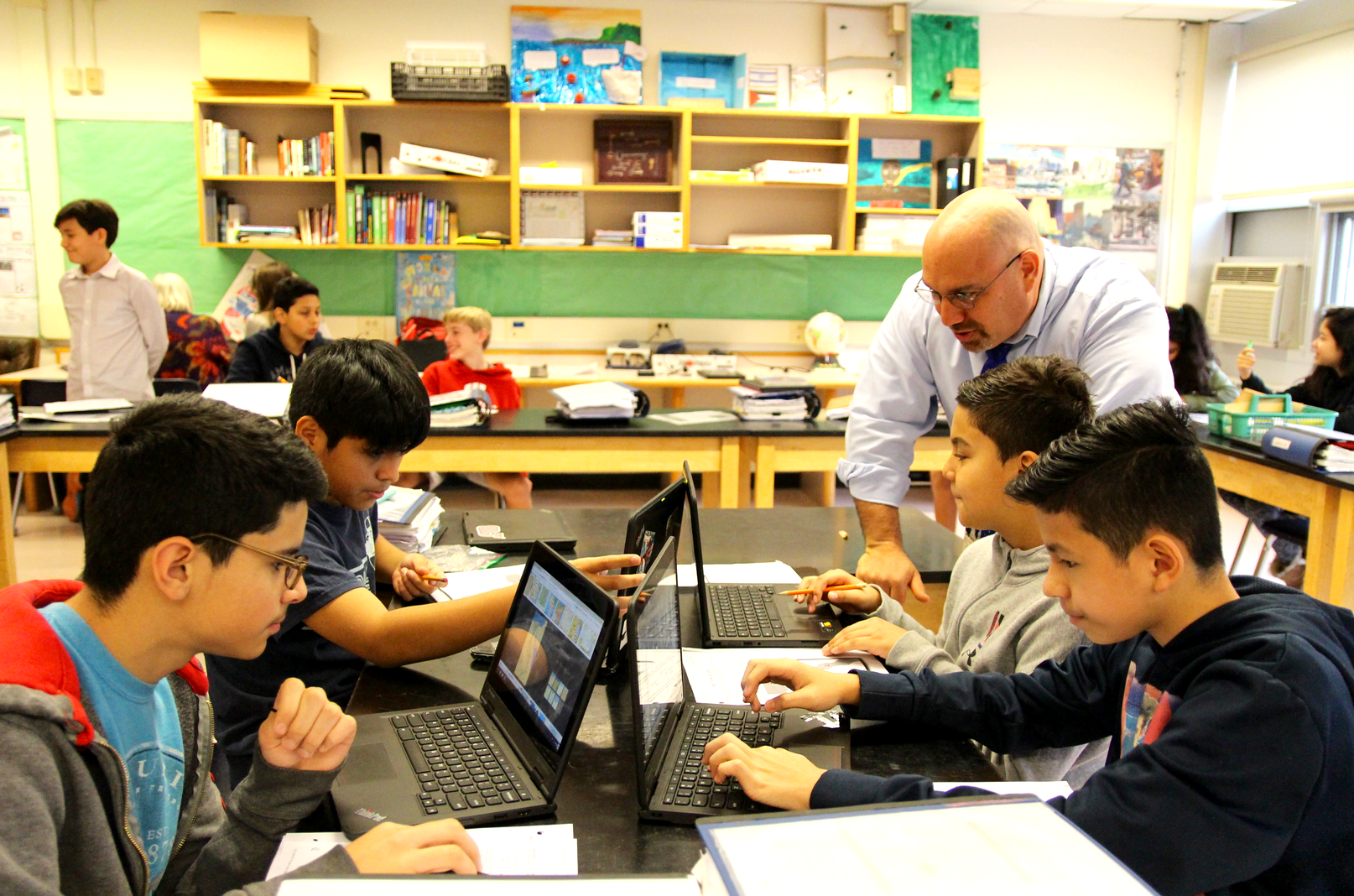 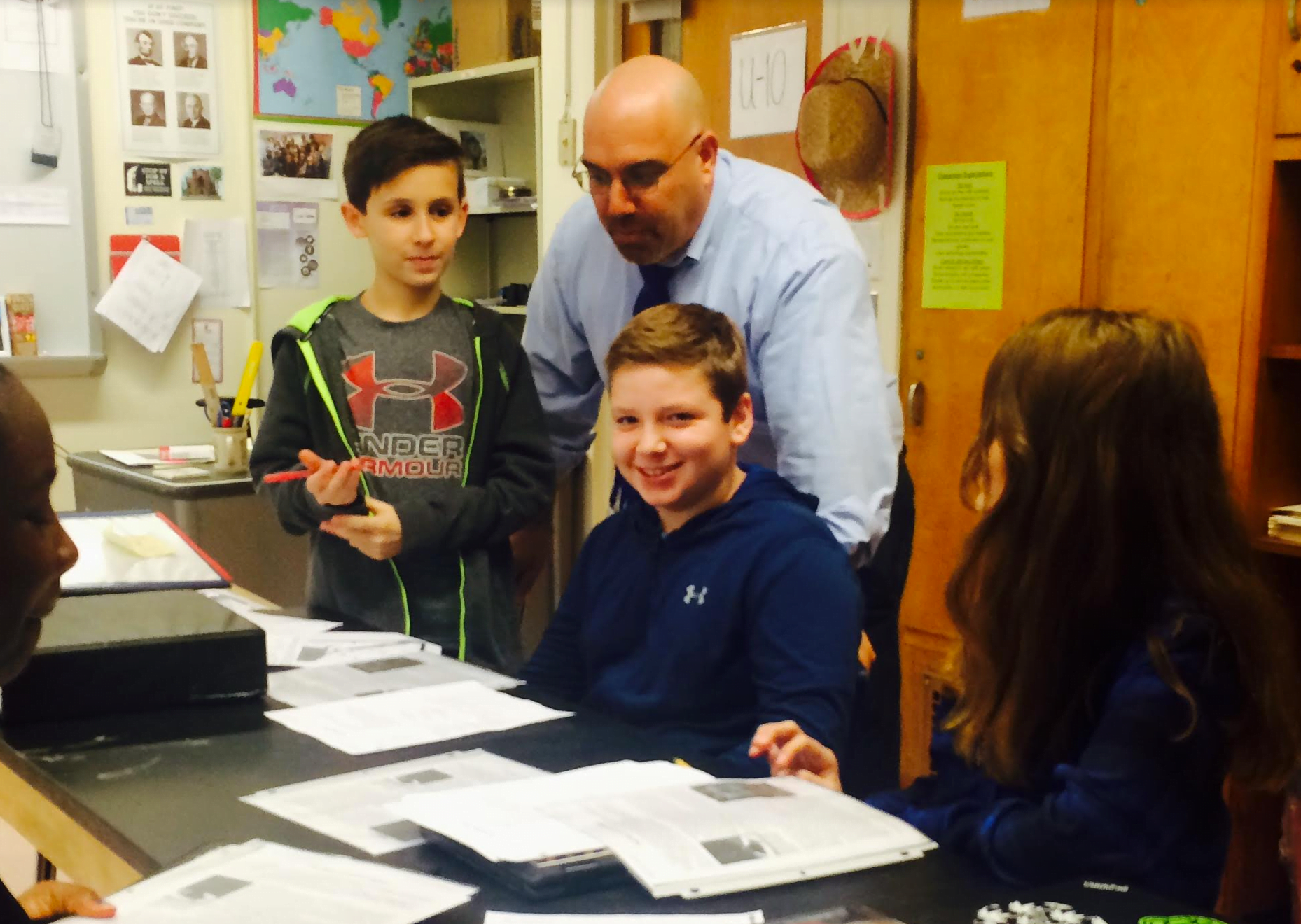 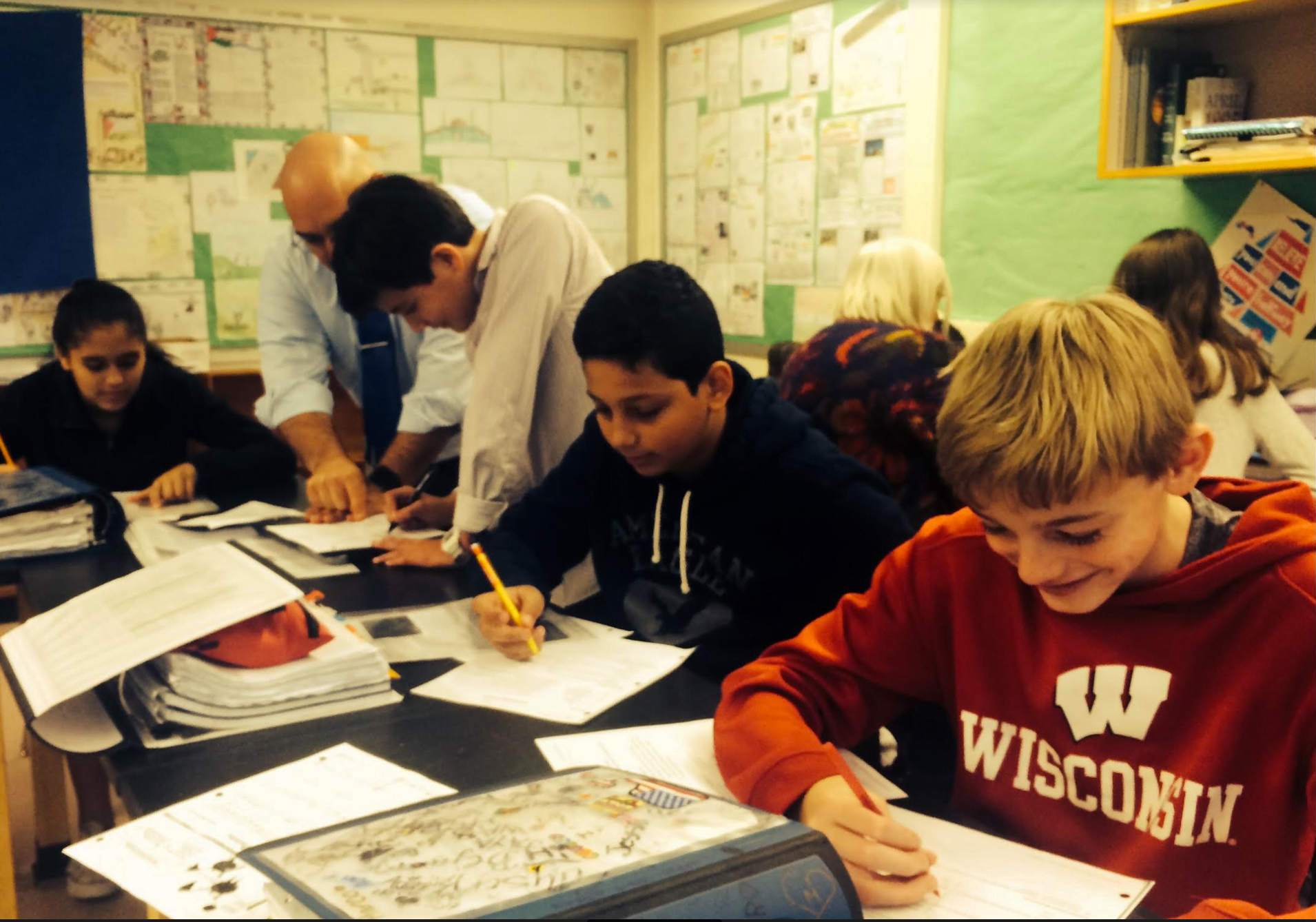 Beinstein acknowledged students are far more than their test scores. But he said, through ECRISS, a tool to identify students in need of intervention, staff can pinpoint where academic help is needed.

Another part of the secret sauce is that Beinstein is 100% vested in the town.

He grew up in Greenwich, having attended Riverside, Eastern Middle School and Greenwich High School. He later taught at Central Middle School from 1988-2002.

Before coming home to Greenwich to take the helm at Western, he was the principal at Harborside Middle School in Milford.

“It’s great to live in town because I can go home and come back for a night time PTA meeting,” he said.

A hallmark of Western teachers is the extra mile they go for outreach efforts, especially to the Latino community. All PTA meetings are at 7:00pm, an acknowledgement that parents are at work during the day.

A high percentage of parents don’t speak English, so meetings parents are invited to are conducted in two languages. Also, the school conducts workshops on what it means to be a parent in an American school.  The school has a liaison from the Latino community who bridges the gap by translating. Spanish speaking parents are offered translation services for email with teachers, and there is even a phone hotline for Spanish speaking parents to call and have a message translated.

In fact, all the school’s Spanish teachers are native speakers, and a number of WMS guidance counselors speak Spanish as well.

The message to parents is their language differences are not a barrier. The corollary to that, Beinstein said is, “You can’t disadvantage your child by not being involved.”

Beinstein has made his measurable mark on Western, though he is quick to deflect praise and direct it to his amazing, dedicated staff.

“They see the results of their labor. It’s not done for outside recognition,” he said, adding, “And test scores are not the end goal either. It’s about getting all kids ready for the next level.”

The good news is Beinstein is staying put. “I’m not going anywhere. This is my last job,” he said.