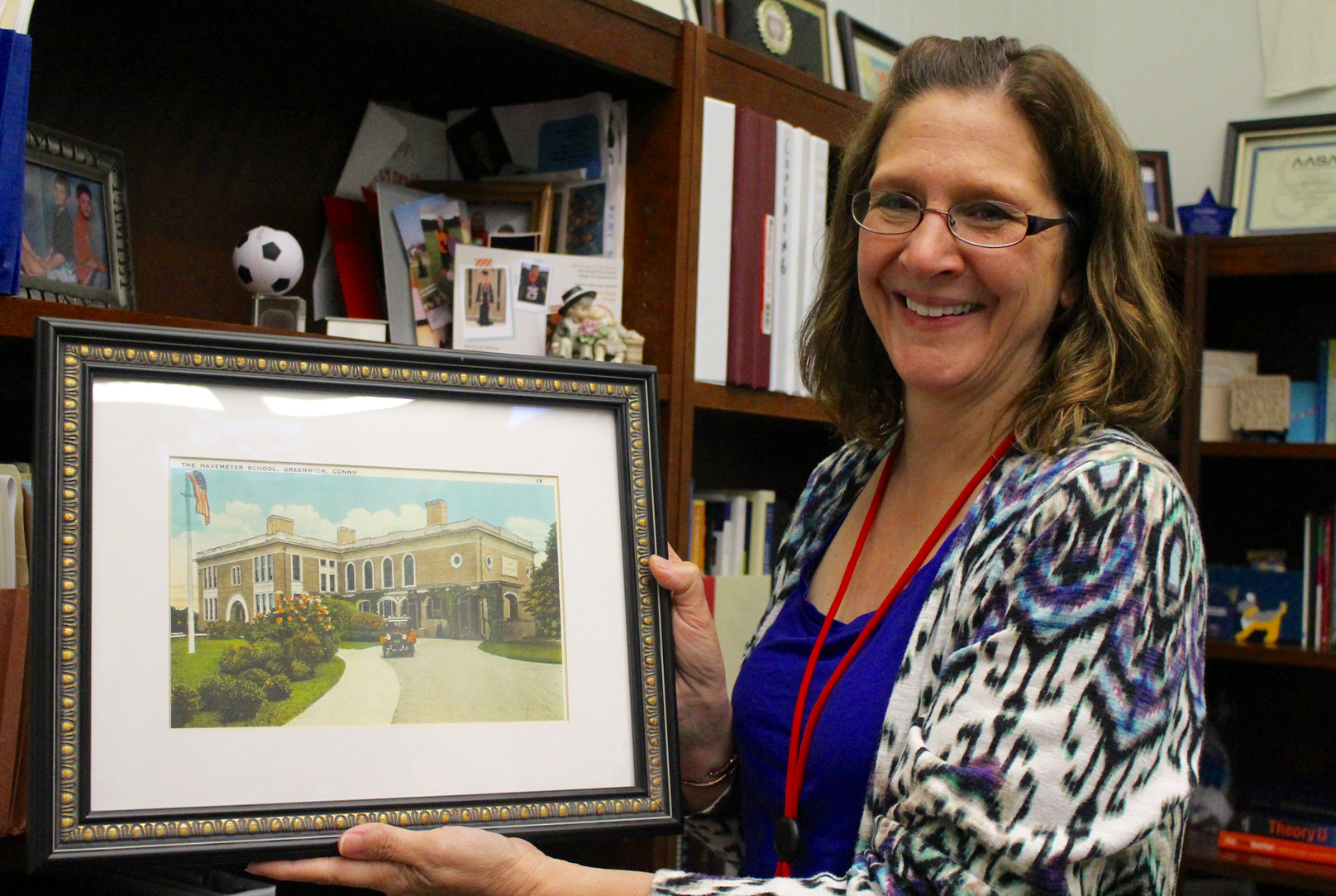 Dr. Jill Gildea in her office at the Havemeyer building with a vintage postcard of the historic building. Oct 18, 2017 Photo: Leslie Yager

A typical day at Havemeyer. Everyone’s gone home but Dr. Jill Gildea, the superintendent of Greenwich Schools is still in her office. The quiet affords time to reflect after another busy day, and on this day, Gildea visited three schools, as she does every Wednesday.

In addition to meeting with each school’s principal, during “classroom walks” Gildea is invited to see examples of personalized learning.

Gildea, who is excited that her daughter, a high school sophomore will enroll at Greenwich High School second semester.

Since starting her new job over the summer, the new superintendent said she’s been doing a lot of listening and learning about the district.

“I’ve been learning how all the systems work, and how all our roles work, the budget process – reflecting and making difficult recommendations,” she said, adding that the strategic plan and individualized learning have been focuses.

“It’s a fast pace,” Gildea said. “But I’m taking time. If you want the superintendent to be here for a while, you want them to listen and reflect.”

Gildea said it has been a challenge to arrive at a time when so many changes are under way. Arriving in Greenwich in the middle of summer, the superintendent said she was told it would be ideal because everything slows down in Greenwich over the summer.  That was not the case.

Lorianne (Lori) O’Donnell started in August as the Chief Operating Officer and Daniel Watson started in September as Director of Facilities.

“We’re all learning and discovering together,” Gildea said, adding that the new, New Lebanon School is an excellent investment in the future.

The three-section elementary school will have room available for pre-school through 5th grade students, and will be built along the standards set by both Hamilton Avenue School and Glenville School, so there will be parity across classroom size, lunchroom capacity, etc.

“Currently, we have had our preschool and kindergarten students off-site, and it is great to know that a year from now, they’ll be back all in one school,” she said.  “Right now, preschool students are at Parkway School and Kindergarten students are across the street at BANC in a rental facility. And while clean and tidy, there is not a great deal of natural light. Students will benefit from their right-sized school space.”

While the groundbreaking at New Lebanon in early December was an exciting milestone in what was a lengthy and arduous process, it is just one of 15 school buildings.

Gildea, who has been immersed in the master facilities study, said, “It was nice to hear architects and engineers on the state of the facilities. The numbers can be intimidating, but it’s better to have all the information and a big picture of all the facilities.”

The all encompassing facilities review will take a year and a half of study, and include everything down to boilers, windows and roofs of individual schools as well as playgrounds, fields and curbs.

“It’ll be a useful tool for the BET and provide better data to make recommendations,” she said.

In the end, there will be single, massive document that breaks down the infrastructure of all the schools. This is no small feat, considering there is 1.5 million sq ft across all 15 buildings. Greenwich High School alone encompasses about 450,000 square feet.

The superintendent said the next step in the The Cardinal Field Feasibility Study
includes two upcoming meetings with committees for feedback and then a recommendation to the BOE from the Committee on which proposal, if any, to pursue.

As for the Master Facility Plan, there will be some additional walk through and another sharing session with administrators.  Short, intermediate, and long-term plans for maintaining district facilities will be developed.

In all, the district’s facilities are valued at about a billion dollars, and, Gildea noted, the facilities were underfunded for a long time.  “The town wants a 15 year plan,” she said. “I want to know the people planning the next 50 years in Greenwich. You have to invest in infrastructure.”

“I know a lot of people were saying Greenwich is a bedroom community,” Gildea said, noting the town’s proximity to New York City. But she noted that may not necessarily remain the case as more people work remotely. She said Greenwich must be forward thinking.

“Are we ensuring we are a self sustaining community?” she asked. “We need to think about being a smart and resilient town.”

Gildea suggests Greenwich might become a tech hub or innovation center. “That could bring a vibrancy to town, and attract 25 to 55 year old’s.”

“Because people aren’t necessarily going to move here to commute to the city. I see a shift we have to anticipate,” she said.

Before settling in central Greenwich, Gildea rented an apartment on Greenwich Avenue over the summer.  “I walked around a lot and saw, down by the bottom of the Avenue, so many young urban professionals as well as retirees,” she said. “There’s the film festival, Bruce Museum and Greenwich Library right there when you finally have the time to enjoy them.”

“We need to make sure to continue to attract people to Greenwich.” Toward that end, Gildea said, “The greatest of all human services is public schools.”

“You’re reimagining our town and schools. If you can’t do it here, I’m not sure where you can do it,” she said, adding that she is excited about the potential of personalized learning.

Gildea said personalized learning opens up opportunities for innovation and inspires teachers, particularly when students don’t have to switch classrooms.

“Ideally, when personalized learning succeeds, a student is neither bored, nor finding the work too hard. That’s when you know when it’s working,” she said. “Rather than saying, ‘I’m done with this book,’ they ask, ‘What’s next because I’m curious.'”

Gildea said she’d enjoying her role at the helm of Greenwich Schools. After all, she said, “We’re here to perform and provide outstanding experiences.”