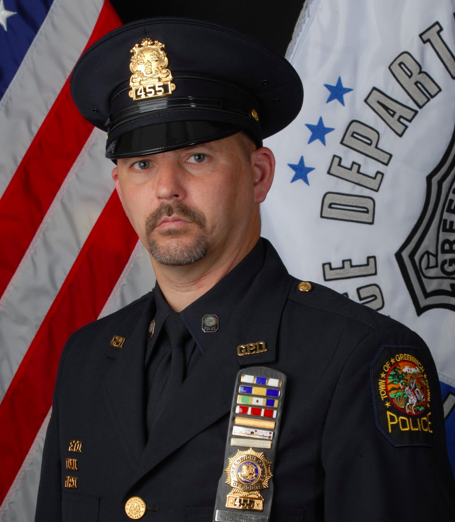 On August 6 MPO David Colbree responded to New York Sports Club on a report of a subject in cardiac arrest. He was the first emergency worker to arrive on the scene and discovered that medical assistance was being administered to the patient by a civilian Good Samaritan who had some training in CPR. An assessment revealed that the patient was not breathing and did not have a pulse. MPO Colbree utilizing his medical training and issued equipment shocked the patient with an Automatic External Defibrillator (AED) and continued CPR per the protocol.

The patient survived the cardiac arrest as the result of receiving immediate CPR, quick application of the AED, and the superior pre-hospital care by all first responders and especially MPO Colbree.

“Our department is always striving to provide superior police services and at the GPD, that includes emergency medical care. In this instance MPO Colbree’s professional demeanor, decisive action, and medical knowledge all came together to insure the best possible outcome for the patient. On behalf of the patient, his family, and the community I commend your actions,” said James Heavey Chief of Police in a release.

The Town of Greenwich is structured to mirror the “Chain of Survival” concept as endorsed by the American Heart Association.

The cardiac arrest save of August 6 in one of our public health clubs is an excellent illustration of this fact. A trained bystander started CPR on an adult who was in the midst of his normal workout. The call was made to the E911 communication center that is staffed by civilian Dispatchers who receive and dispatch all Fire, EMS and Police calls. A Greenwich Police Officer arrived in minutes with an Automated External Defibrillator [AED] and successfully delivered one electrical shock to his heart. Greenwich Emergency Medical Service [GEMS] paramedics followed and initiated advanced life support treatments including medications to stabilize the patient’s newly restored heart rhythm. The patient was then transported by GEMS to the awaiting team at Greenwich Hospital’s Emergency Department.

While the national average for successful resuscitations in the out of hospital setting hovers around 9%, stories like this are not rare in Greenwich. In 2013, Greenwich’s “save rate” was 40%.

This trend towards success in the treatment of cardiac arrests began in 1997, when AED’s were introduced into our first response system. The Greenwich Police Department embraced this enhancement of their vital role as medical first responders, and 5 cardiac arrest victims were saved within the first 6 months of this new program. Today, all police cars and patrol boats carry these devices and all police officers have extensive training in their use.