Beginning Monday, May 19, Greenwich Police urge drivers and passengers to bucle up as officers will be out in force, taking part in the 2014 national Click it or Ticket seat belt enforcement crackdown.

“As we kick off the busy summer driving season, it’s critical that everyone buckles up every time they go out, day or night – no excuses,” said Officer Roger Drenth of the Greenwich Police Traffic Division.

The law enforcement officers are joining forces to provide increased seat belt enforcement at the Connecticut New York state borders, sending a “Zero Tolerance” message to the driving public. Driving or riding unbuckled will result in a ticket, no matter what state!

The locations of the operation will be:

According to the US Department of Transportation National Highway Safety Administration, (NHTSA) 52% of the 21,253 passenger vehicle occupants killed in the 2011 were not wearing seatbelts.

Unbelted fatalities are more prevalent at night than during the daytime. According to NHTSA, of the 10,135 passenger vehicles occupants killed in 2011 during the overnight hours of 6:00pm and 5:59am, 62% were not wearing seatbelts.

“Seat belts save thousands of lives every year, but far too many motorists are still not buckling up, especially at night when the risk of getting in a rash is even greater. We want to make this the safest summer possible. Buckling up is not optional,” said Drenth. “It’s the difference between life and death in a crash. That’s why we’re enforcing the law. Click it or Ticket, every time, day or night.” 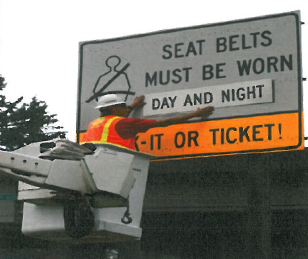 ide, while this year’s

Click it or Ticket enforcement mobilization runs May 19 through June, officers are out enforcing the seat belt laws year-round.

More information on Click it or Ticket is available online.