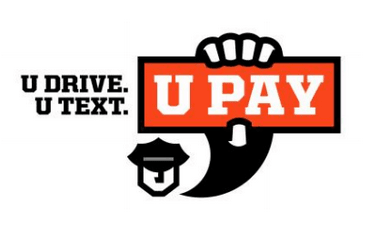 The Greenwich Police Dept along with the CT Department of Transportation’s Highway Safety Office, has announced the continuation of the “U DRIVE. U TEXT. U PAY.” initiative – an effort to crackdown on motorists who choose to text, talk or otherwise distract themselves by using a hand-held mobile phone while driving.

The first leg of the campaign, which took place in April 2017, found that there was a 17% drop in mobile phone use by drivers at observation locations where police conducted enforcement.

The drop in observed use of mobile phones demonstrated the need to reinforce to motorists that using a mobile phone while driving is both dangerous and illegal.

Although encouraging – there is still more work to be done. During the April 2017 campaign, there were almost 12,000 citations issued to motorists who chose to ignore Connecticut’s distracted driving laws.

The second run of this two-part campaign runs from August 2nd through the 16th.

Greenwich Police will mobilize by adding special patrols aimed at catching distracted drivers – especially those on their phones. Over 50 law enforcement agencies, including both state and local police, who were previously involved in the April 2017 campaign, are again participating in this operation.

Under Connecticut’s cell phone and texting law, violations involve heavy fines, ranging from $150 for a first offense, $300 for a second violation, and $500 for each subsequent violation.
In 2015, 3,477 people were killed and an estimated additional 391,000 were injured in motor vehicle crashes involved distracted drivers nationally.