Greenwich Education Group held its dedication ceremony for Beacon School, set to start a new school year next Tuesday with 35 students on a beautiful new campus. On Thursday students, parents, teachers and the press visited the renovated historic Hubbard Mansion in the Hubbard Heights section of Stamford to take a peek inside the school and witness the ribbon cutting. The mansion was previously home to the Mother of God’s Academy, an all-girls’ Catholic high school. 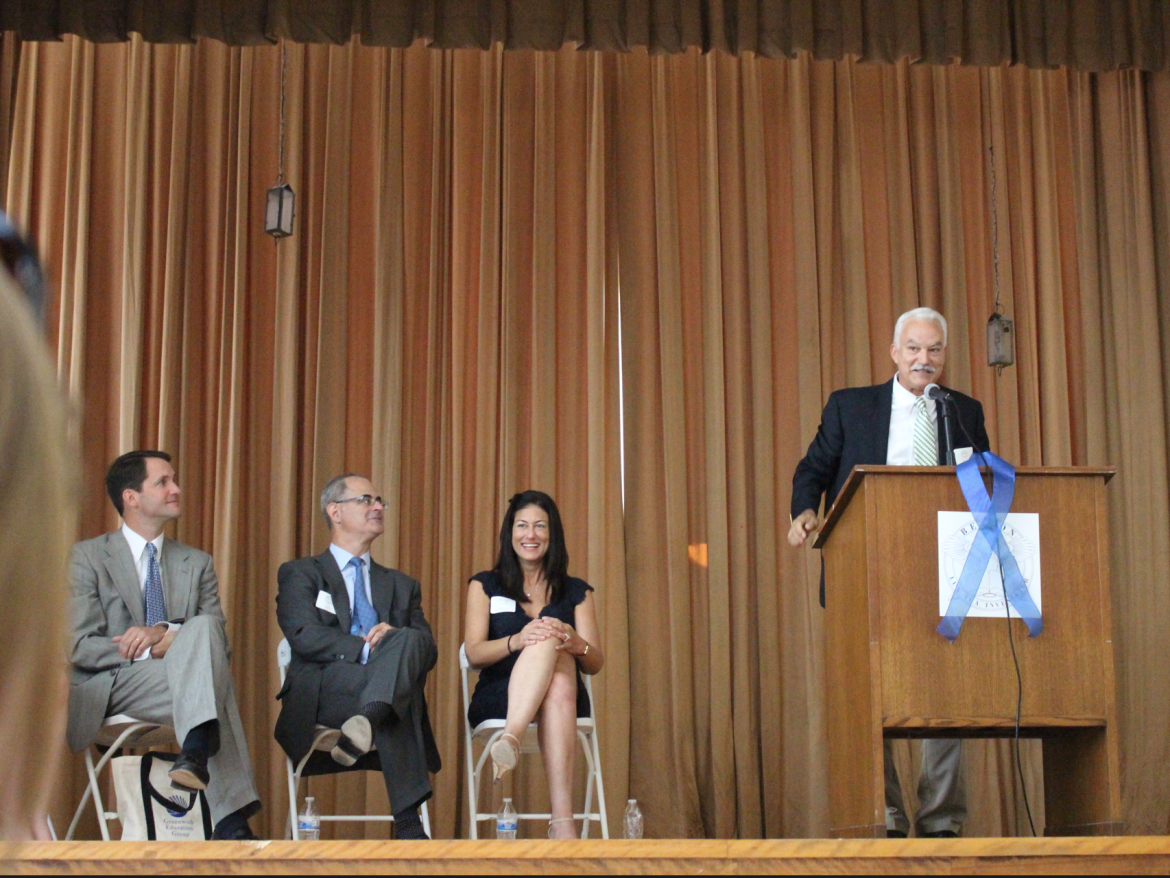 After a career of 25 years in Stamford Public Schools, John Coperine, who retired and hoped to do some tutoring for Greenwich Education Group, is now the Assistant Head of School at Beacon. Credit: Leslie Yager

Greenwich Education Group founder Vicky Newman, the former Parkway School teacher who has successfully launched a constellation of private schools welcomed the crowd on Thursday, and took a moment to reflect.

“It’s amazing to think that the beginning of what is now Beacon began in January 2007, with our first home schooling student,” Newman said. “He is now a college graduate and a successful strategist at a top public relations firm in Boston.”

Newman said that boy’s family, and several others, encouraged her to turn the successful home schooling program into a school, which led to Beacon’s founding in 2009. “Thank goodness they did,” she said. “As Nelson Mandela so eloquently said, ‘Education is the most powerful weapon we can use to change the world,’ and Beacon is clearly leading the way.”

Jim Himes, father of two school age children, said that apart from safety, he understands that parents care most about finding an environment where their children can find their passion.

“My wife and I did a lot of thinking about how to best do that — and we have one in public and one in private school. Vicky’s words made all the sense in the world to me. They were Best Fit.'”

“Sometimes truly gifted and talented children need a different, perhaps smaller, more innovative environment than others. The fact that Beacon is going to provide that option is a spectacular thing for parents, but also for all of us,” Himes said of Beacon, where the average class size is 4-6 students.

“The answer to prosperity and access to the American Dream and our country being competitive is what happens in buildings like this one,” he said. 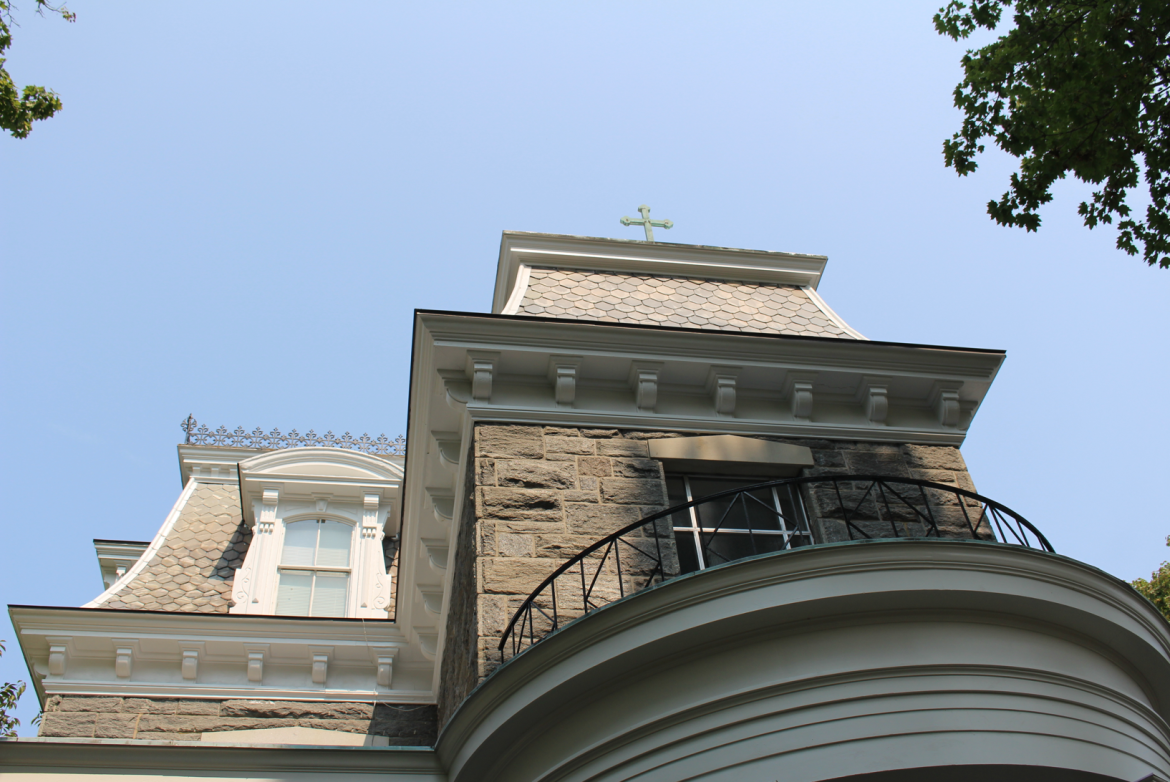 Eric Kaye, Director of the GEG Schools’ Foundation, said his son Jason graduated from Beacon in 2011. Having witnessed the growth of the school first-hand, Kaye said, “From the second story of a building in a shopping center, to Commerce Drive to where we are today, it’s a remarkable journey. Beacon, and all the Greenwich Education Group schools allow our children to reach their potential in a compassionate environment that champions their strengths and passions.”

“We all know the sense of relief we experience when our children find the perfect fit — the perfect fit that Beacon provides.” Eric Kaye, Director of the GEG Schools’ Foundation

Head of School Meredith Hafer recalled her own school years and how she wanted school to be more than it was, and her impressive number of absences. She remembered pressure not to participate in class too often because it was frowned on. She took a variety of classes outside of school, including creative writing, philosophy and weaving. “I remember what it was like to crave intellectual stimulation,” she said.

“I also remember what it was like to find a school that was a good fit for me, and how life changing it was. Perhaps, how life saving it was,” she said. “For all of you who who were criticized for asking too many questions, we dedicate this to you. For all of you who were told that it’s not cool to be smart, we dedicate this school to you,” she said describing Beacon School as a haven for the intellectually curious, a compassionate community, a playground of ideas. 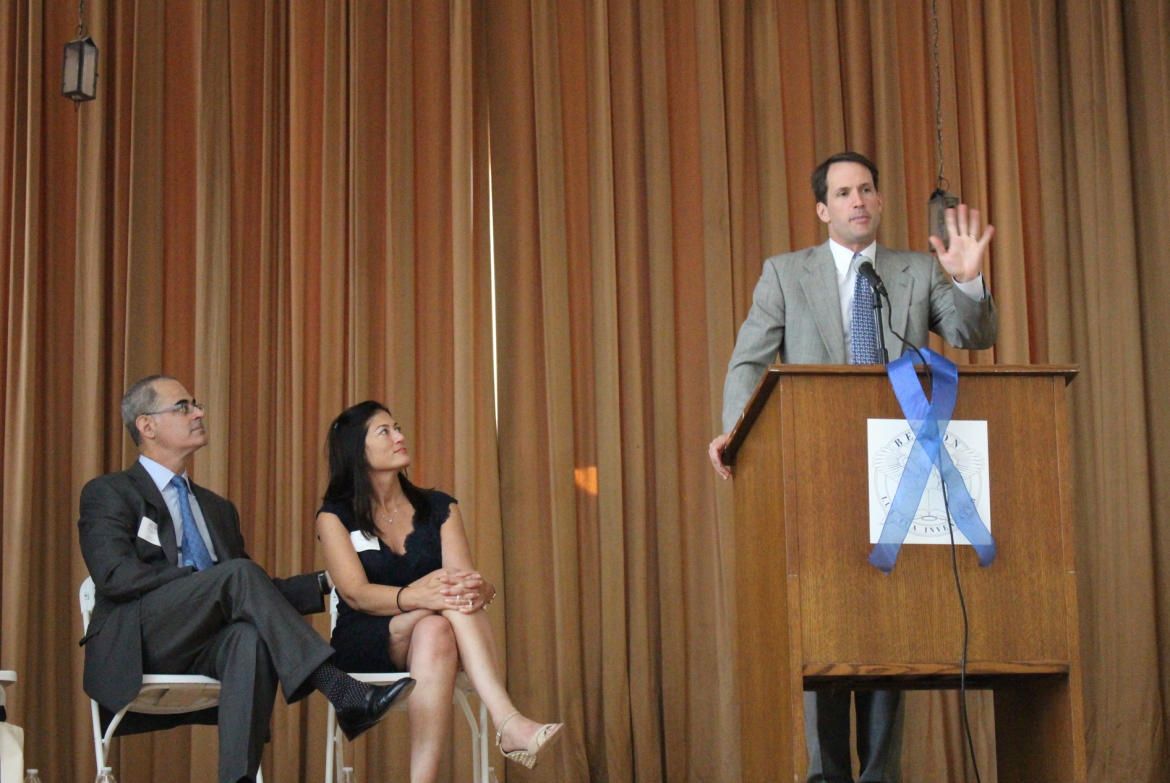 The group broke into groups for tours of the campus, which included the student café, student lounge, study hall and library, office, science room, art room and student advisor center, where there is a certified guidance counselor and college counselor. 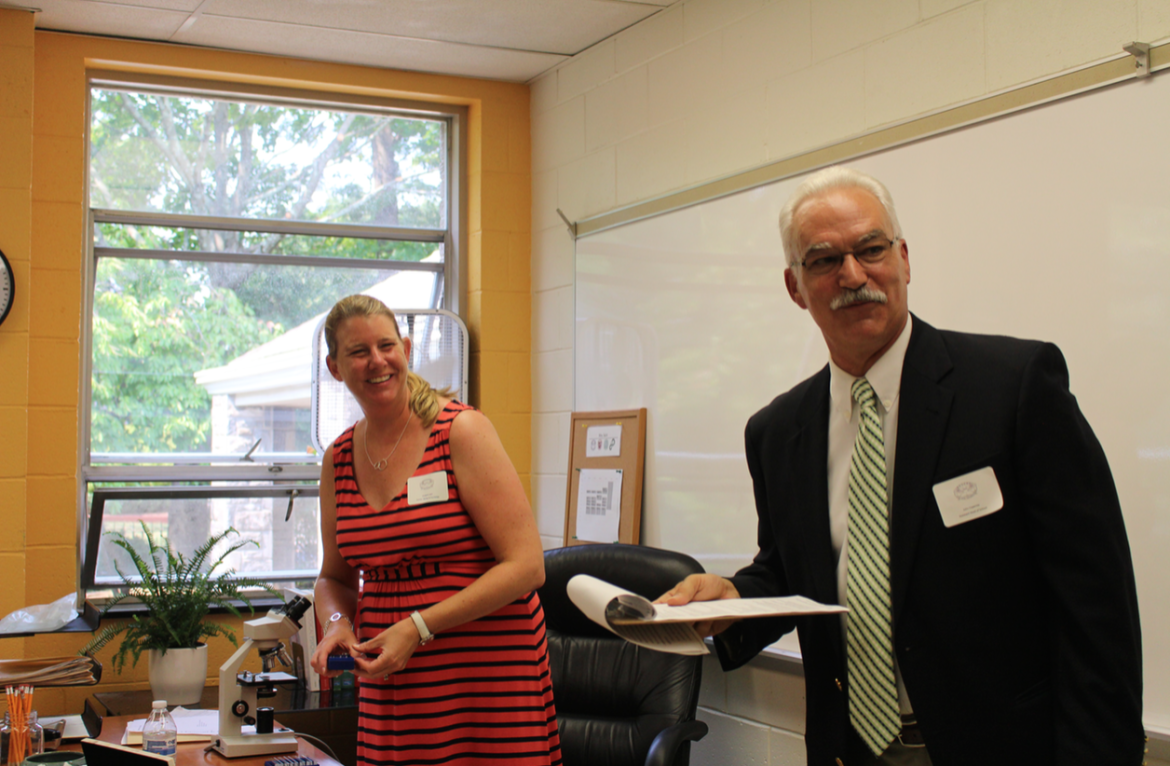 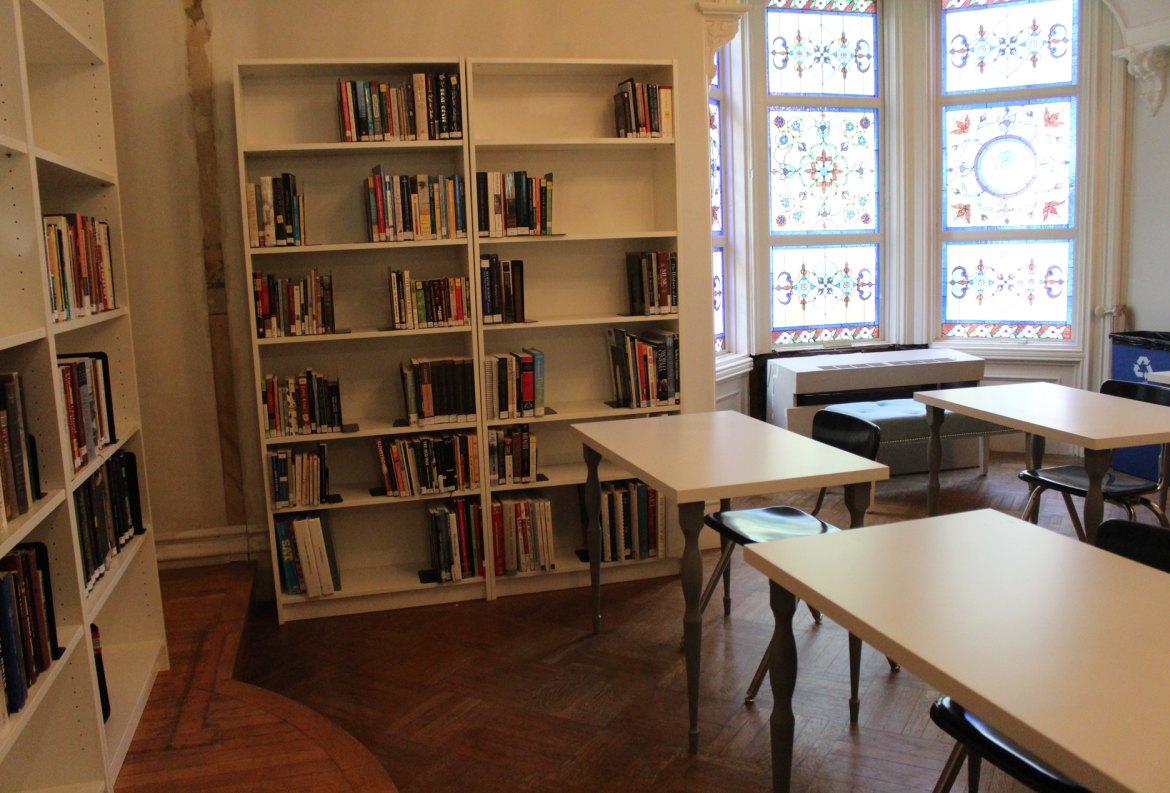 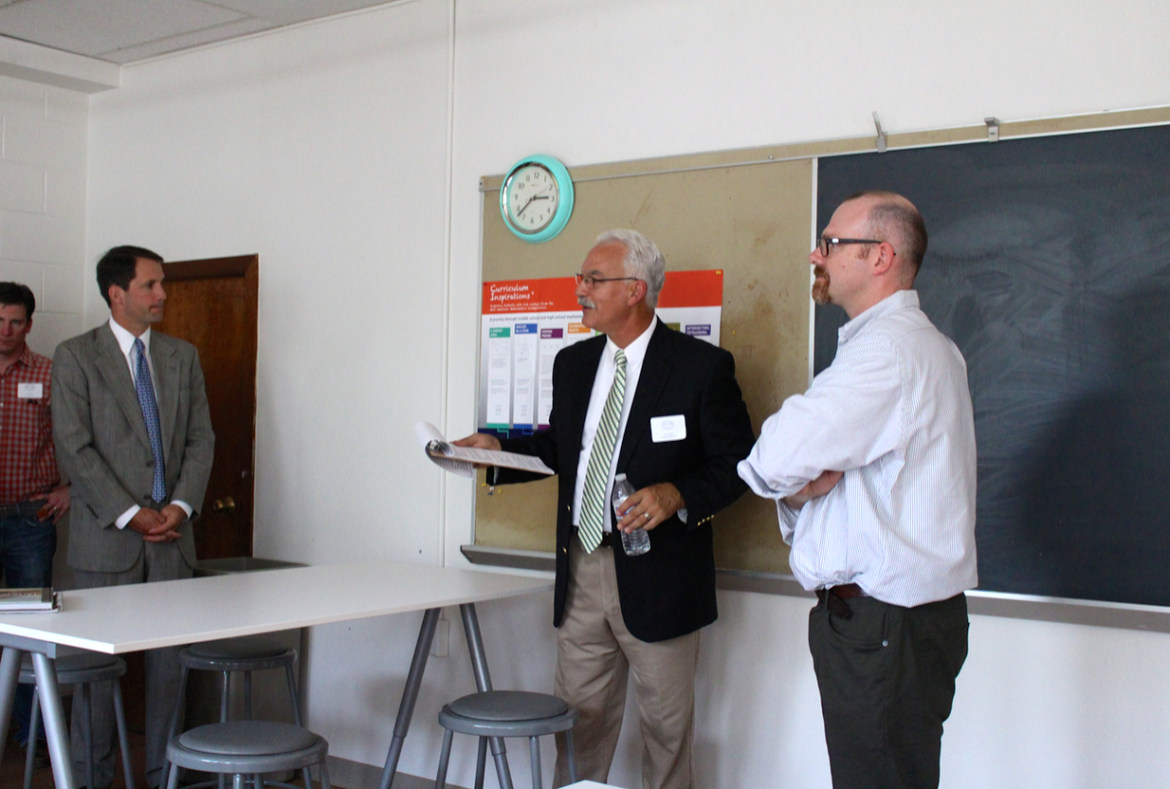 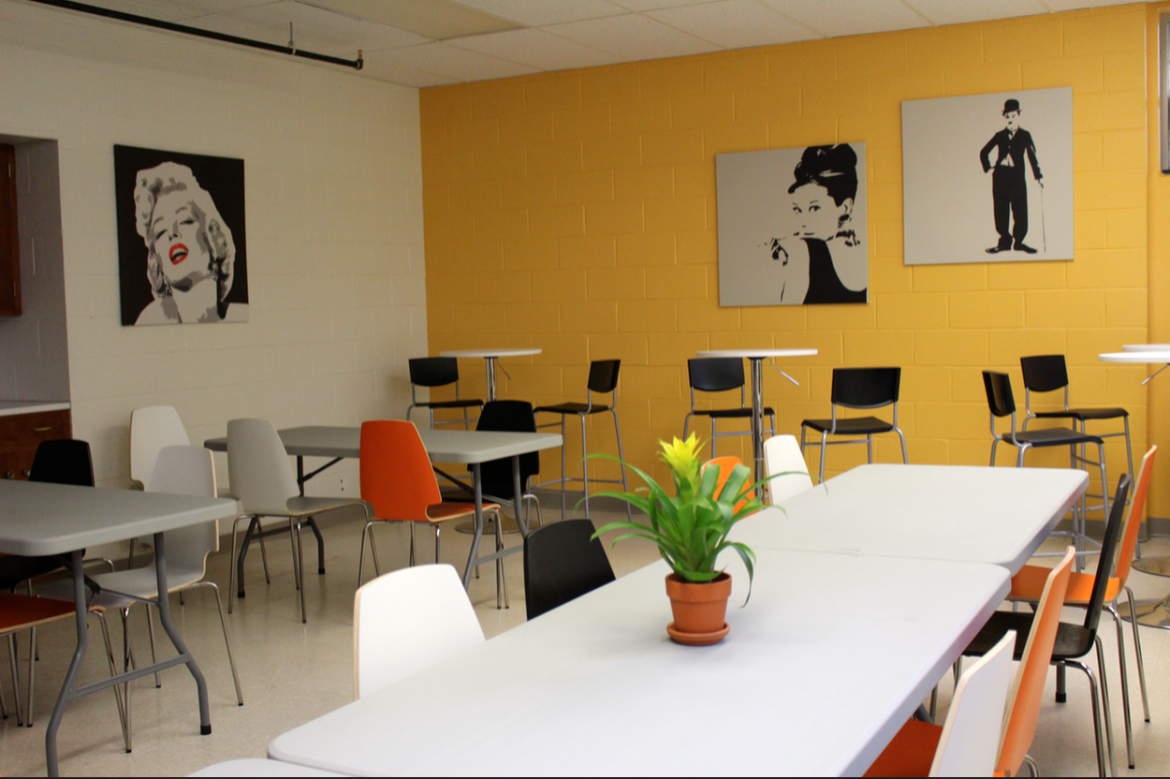 The café at Beacon School. For now the school takes students lunch orders and a deli delivers lunch. According to John Coperine, Assistant Head of School, the school has a commercial kitchen and hopes in future to obtain the necessary permits to cook hot lunch on site. Credit: Leslie Yager 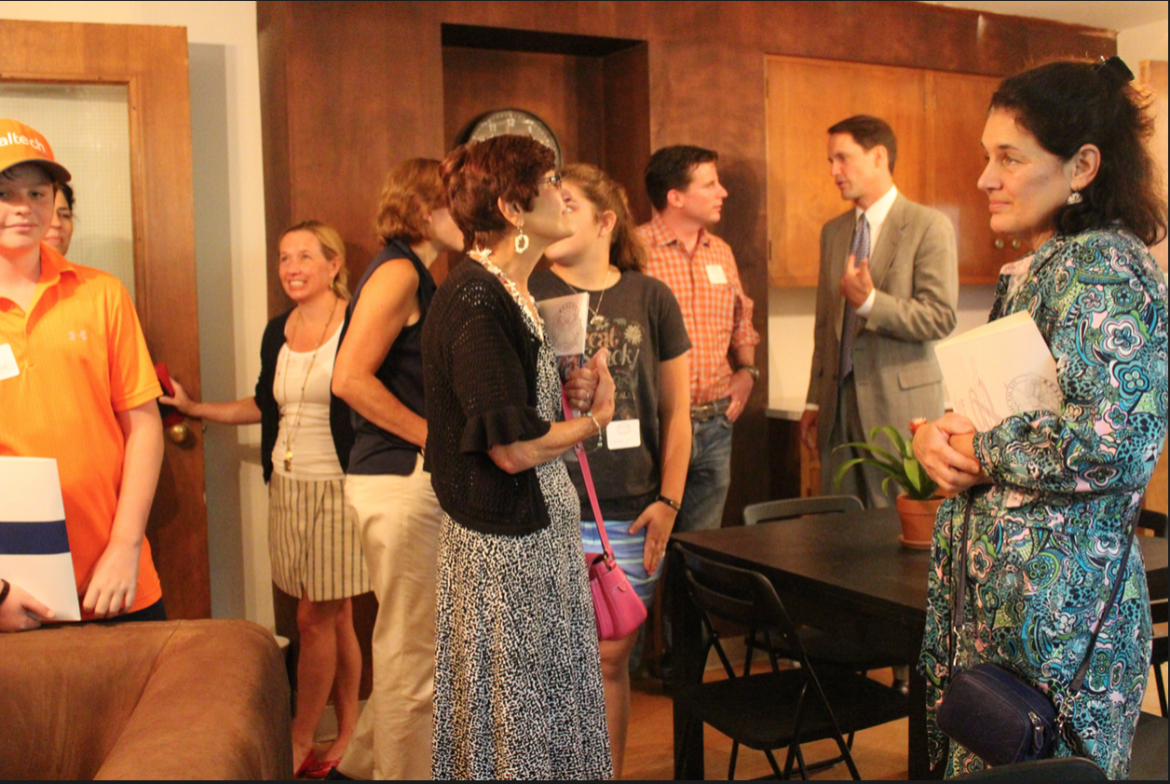