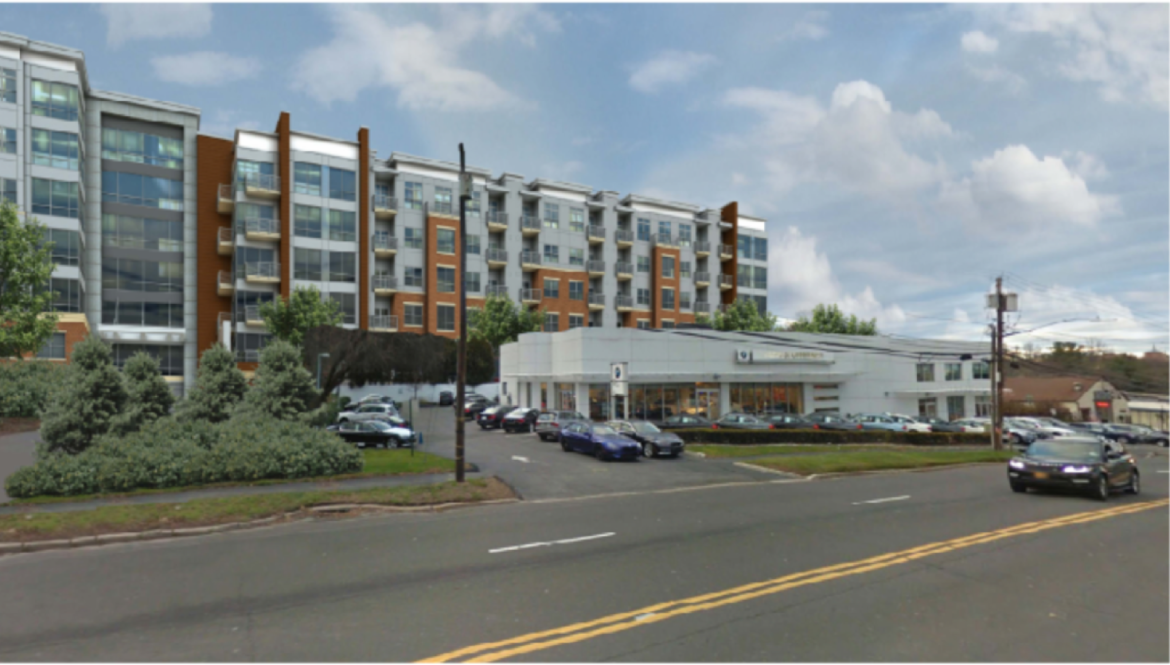 On Monday night the Wetlands Agency voted unanimously 7 to 0 to deny a controversial application to build a large apartment complex on site of the Post Road Iron Works, a steel fabrication plant in operation for the better part of a century.

The proposed building, massive with 355-units and minimal green space, relied on an Affordable Housing act, section 830g, for exemptions from many zoning regulations. A municipality is subject the affordable housing act statute 830g if there is less than 10% affordable housing, which is the case in Greenwich.

The proposed “pedestal building” would have had five stories of apartments over two levels of underground parking, an indoor pool and two small indoor courtyards. Individual apartments would each have a 5 ft balcony.

Throughout months of public hearings, some running into the early morning hours, neighbors have turned out in force to oppose the project.

Inland Wetlands and Watercourses Agency director Pat Sesto, said in an email Tuesday night, “The commission was clear in their responsibility to protect the Horseneck
Brook from the sewer and look to see how the proposed development would
affect it.”

She said that without a plan which was acceptable to DPW, the agency had no
way of evaluating if regulated activities existed or the impact of those,
if any.

Mrs. Sesto said the Agency will now have to turn their attention to the off-site wetland
and pond, which apparently received polluted runoff from Post
Road Ironworks.

“Unfortunately, the property owners will need to be a party to the violation along with Post Road Iron Works,” she said.

In a memorandum dated June 23, (Resolution recommendation 6-23-16 16-002) Mrs. Sesto outlined reasons the applicant was not entitled to a permit and recommended denial of the application.

She wrote that the concept of remediation of the site is accepted and supported but that the applicant had relied on an actionable level of lead contamination as defined by a Residential Direct Exposure Criteria, which sets standards for human health and does not reflect criteria to safeguard ecological resources.

“The applicant did not further the discussion on the impacts to the aquatic life in the wetlands and pond which lead contamination can impose and the impacts of bioaccumulation,” Sesto wrote, adding that there is insufficient information for the agency to determine what the impacts to wetlands and watercourses would be.

Also, a closed circuit TV investigation of the existing drain pipe discharging to the wetlands and pond was requested, yet only a poor quality video was submitted just prior to the last public hearing, and lacked a professional interpretation.

Also, the applicant was required to assess impacts to wetlands or watercourses outside the area for which the development was proposed, but did not adequately evaluate the off-site wetlands, some of which are immediately adjacent to the property and under the same ownership as the subject parcel.

Among a host of concerns, was that the vernal pools at 6 and Lot 4-2 Hemlock, and that  the loss of the residential forest on the property would eliminate habitat for wood frogs.

The Planning and Zoning commission must still render a decision, and the application appears on the commission’s tentative agenda for July 6.