At low tide, it’s possible to see where the stones and mortar from the corner of the pier at the bottom of Steamboat Road have fallen off. The pier, a popular spot for fishermen and others who stop there to take in the great view of the harbor, is in disrepair.

At Wednesday’s Parks & Rec meeting, director Joe Siciliano said the pier has been in place since 1896. The pier was registered in land records in 1911. Joe Siciliano said he has the document in his office. “It’s existed there in kind of an open use, whether for fishing, viewing, or destination point of walking,” Siciliano said, adding that an appropriation of $600,000 has been requested to rebuild the pier.

“From 1911 to date, there have been various repairs over the years – but tidal surge, storms, hurricanes, general wear and tear, influx of water – it needs a little more attention, including the discussion about whether or not we’re in compliance with having a pier without a railing,” Siciliano said.

He said the pier falls to the Department of Public Works because it is considered an extension of the road, and land records refer to the pier as South Greenwich Avenue.

“People would drop their goods there by water to the bottom of Greenwich Avenue. That was the purpose of the pier back in the day. Since then it’s been enjoyed by fishermen sightseers and people having lunch,” he said.

Siciliano said the debate has shifted toward whether there should be fishing permitted off the pier, or whether the pier should be eliminated altogether.

“It’s become a very hot item,” he said. “I’ve spent hours on this, having discussions.

Opponents of the repair and upgrade – which could include safety railings, better delineated parking, adequate turnaround, and a designated handicapped parking space – have been members of Indian Harbor Yacht Club and neighbors who describe the pier as an attractive nuisance.

“It’s unsightly,” said Nancy Caplan, chair of the Parks & Rec board. “That’s what they don’t like.”

Mr. Siciliano said Police Chief Heavey looked to see if there had been incidents reported to police at the pier and found just six incidents in the past five years, ranging from parking complaints, to a fender bender, to a fishermen dispute.

As the pier is far from a hotbed of crime, its unsightliness has become the focus of discussion. The sight of fishermen cleaning fish on the pier takes away from the experience of those enjoying the scenic outlook or a place to have a lunch break. It is not uncommon to see pools of blood and fish heads left behind by fishermen, not to mention the foul fish smell from the bait and cleaning of fish.

“The pier has been on land records since 1911. You have to imagine there have been people fishing there for a very long time,” Siciliano said.

The BET did approve the funding of the repair and the item will next be considered by the RTM.

“It’s an asset of the town,” Siciliano said, adding that the immediate decision is whether or not to repair the pier. “Then let the discussion of fishing and other activities there go to the regulatory authority, which is the Board of Selectmen.”

Siciliano said the Harbor Management Commission put together a letter of support for repairing the pier, describing it as a scenic view of Long Island Sound that should be protected.

On Friday morning, during his Ask the Selectman show on WGCH 1490, Peter Tesei said he had researched the history of the pier, which he referred to as a “landing.”

Tesei said the pier, or landing, has drawn a great deal of interest.

“It’s a piece of infrastructure that is really not under the aegis of Dept of Parks, as many had thought, but is really within the confines of Public Works because it as considered an extension of roadway,” Tesei said, adding that the pier’s use has evolved over the years.

“The underlying concerns I’m receiving are related to the activities on the pier and the fishing that has developed through the years, and how that’s mutually exclusive of people going down and using it as a scenic outlook,” Tesei continued. The First Selectman  said he anticipates more consideration of the repair of the pier during the RTM budget discussions. 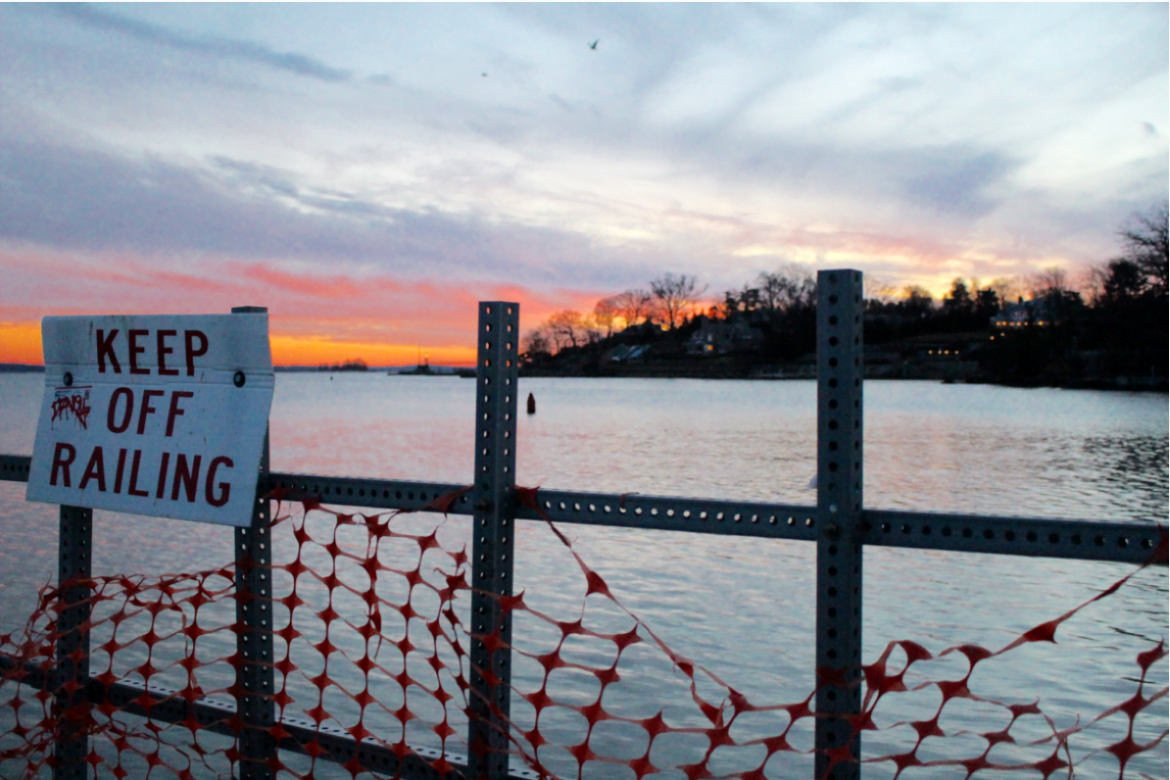 Back in January at one of the public hearings on the budget, Janet Lockton asked that the BET defer or reject the Dept of Public Works request for $600,000 to repair the pier. She questioned whether the specifications called for handicapped accessibility, which is required for a fishing pier.

She said that at 80 ft x 20 ft, the pier is not large enough to accommodate active fishing  and people who simply seek a walk on the pier to behold the views.

Lockton argued that, according to the town municipal code, fishing from the pier is illegal. “No person shall fish except at times and in areas designated by the area dockmaster,” she said, quoting municipal code.