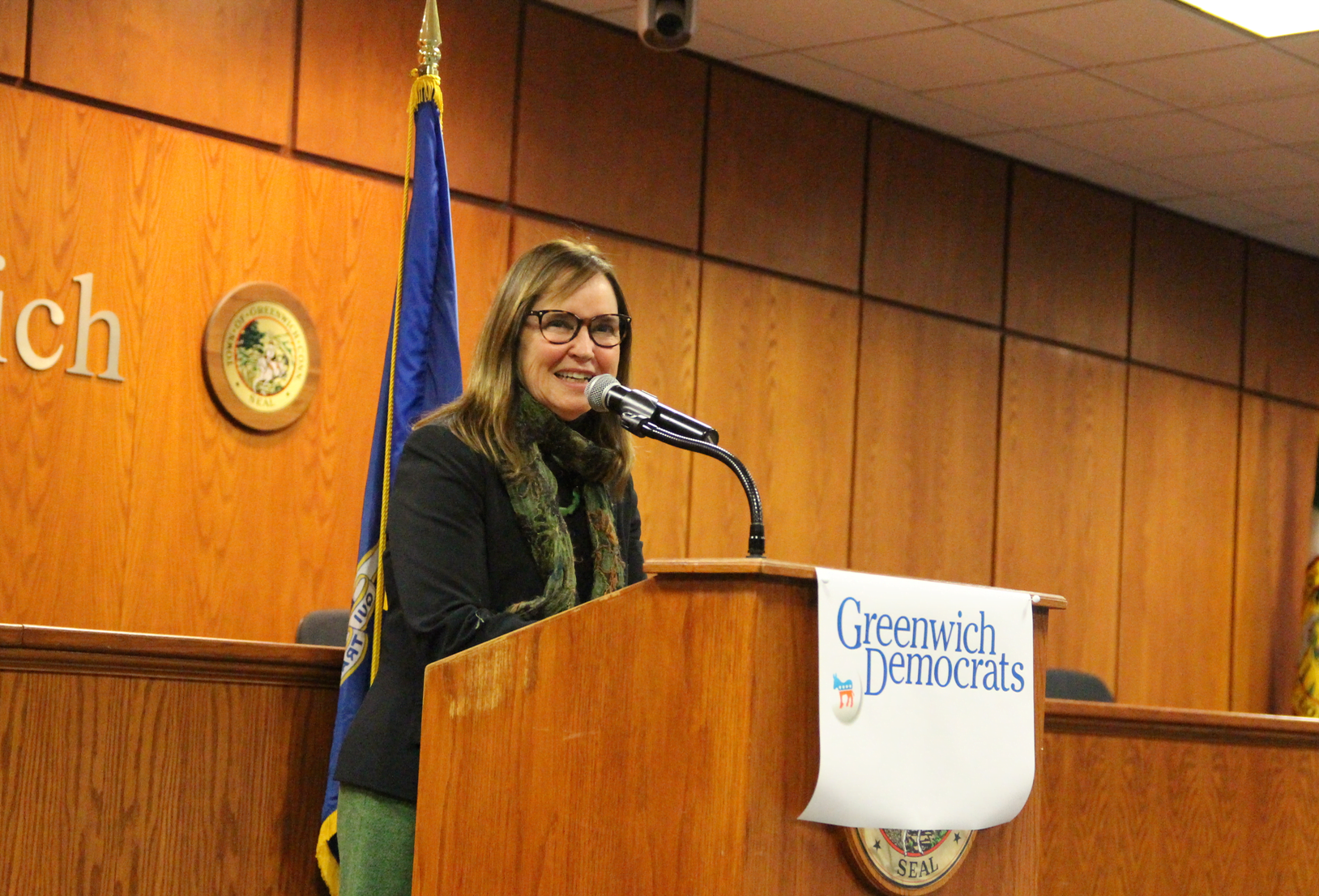 Ms. Merrill said she took office in 2011 at the during of a national storm on voting rights.

“There had been no discussions on voting rights, really, since 1965 with the passage of the Voting Rights Act,” she said, adding that right after she was elected, she attended her first National Secretaries of State meeting, along with eight other newly minted secretaries including Kris Kobach from Kansas.

“He has since then become rather famous for his positions on requirements for ID’s,” she said.

Merrill said when Secretary Kobach claimed there many illegal aliens voting, she was taken aback. “I said, in a rather loud voice, ‘I thought we were here to get more people voting.'”

“I determined at that moment we needed to expand the franchise, not limit it,” she said adding that she became president of the national Secretaries of State in time for the 2016 election.

Merrill said Connecticut has made it easier to register to vote. “You can register at the DMV easily, but you still need to have a driver’s license.”

There is also an online voter registration system, which is fast and efficient, but that also requires having a Connecticut driver’s license.

Merrill said about a third of eligible voters in Connecticut are not registered to vote.

“How do we get them involved through understanding that their vote does matter?” she asked. “Voting rights is the issue of our time. I never thought it would be, but it is.”

Merrill said today’s key controversy is less about voter ID requirements than about people being purged from the voting rolls.

She said that in states including Georgia, North Carolina, and Texas there have been efforts to purge people from the voting rolls despite it being contrary to federal law.

“They’ve all been struck down by the courts so far, but don’t think this won’t be important for the 2020 election,” she said.

“There are very strict federal laws about when and how to remove someone from voting rolls,” she said. “People get furious when they come in and their name is not on the rolls.”

Secretary Merrill said that in 2016 Connecticut was one of 21 states subjected to attacks on registration data bases. “We were told after the act that that Russian agencies tried to enter our databases,” she said.

Since the 2016 election, Merrill has been given security clearance.

“There will be even more of this activity for the 2020 election,” she warned. “It is focused on creating distrust among the American people. If we lose that trust, we’ve lost our democracy.”

Secretary Merrill spent the rest of her talk making the case for early voting in Connecticut.

She said 39 states and Washington DC have early voting, and that Connecticut is one of 16 that still requires voters to provide an excuse in order to vote by absentee ballot.

She said in 2014 early voting was on the ballot, but it was voted down because, she said, the wording was confusing.

“I am introducing a Constitutional Amendment because, weirdly, Connecticut has a provision that says you have to vote on Tuesday,” she said.

“If we don’t do this we’re going to have to have more polling places,” she said, adding that in the last Connecticut election, there were many instances of lines that took two or three hours.

“I am proposing more days of voting. That means in person, on more days than just Tuesday,” she said, adding Greenwich earned the distinction as being the town with the most absentee ballots in the entire state.

“Because it’s a constitutional amendment, I need 75% of the vote in both houses to get it on the ballot in 2020,” she said of her amendment.

In the 40 states where it has passed, early voting has been a bi-partisan issue. “It passed unanimously in both houses in Vermont. In Connecticut it’s somewhat partisan …but I think support is growing.”

Merrill said ideally she’d like to see three to five days of early voting the week just before elections and that not all the polling places would have to be open, since there would be more days to vote.

She said she’d also like to see at least a half day of voting on a weekend.

“When you think about it, who are we trying to get out? People who don’t have those holidays off, people who that don’t have time to stand in line because they have jobs, or maybe they commute to another town for their job.”

Merrill was asked about voter suppression during Q&A. She said it is rare in Connecticut, but that there was an incident in Hamden where a sign was on display saying a photo ID was required to vote.

“No you do not have to show a Photo ID, “she said. “We have a requirement you show something to show who you are. Something with your name and address – some level of identification.”

In the Hamden incident the Secretary of State’s office dispatched one of a team of attorneys to the polling place and the sign was removed.

“Who knows how many people saw that sign, got nervous and did not vote?” she asked.

As for Kobach’s commission on voter fraud, she said she was the first secretary of state saying no push back.

“The commission was disbanded in disgrace,” she said. “But it does take all of us to stand up.”