Update: This article was updated on Jan 16 to include comments from State Rep Fred Camillo

Secretary of the State Denise Merrill launched a push for a Constitutional Amendment to allow Connecticut voters a minimum of three days of Early Voting.

At a press conference in her office on Tuesday, Merrill, a Democrat who was re-elected in November for a third term, said currently, voters in 38 states and the District of Columbia have access to some form of Early Voting. 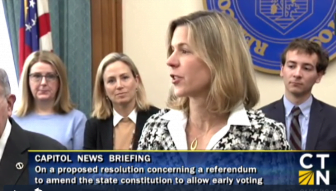 “If this passes, it will require a minimum of 3 days of early voting, and remove the duplicative language that restricts absentee ballots,” Merrill said.

A record number of Connecticut citizens registered to vote in the November 6, 2018 election.  There was also a record turnout despite long lines in some polling places and heavy rain.

Merrill said Early Voting would “take the pressure valve off of election day.”

Also, she pointed out that nearby, Massachusetts, Maine and Vermont offer Early Voting. Recently Michigan was added to the list, and just a day earlier New York passed Early Voting.

In order for Connecticut to implement Early Voting, a Constitutional Amendment is necessary.

“In most states, the matter of voting, voting regulation and absentee ballot voting is a matter of statute,” he said. “We are one of only three that require a Constitutional amendment to take action statutorily.”

“This popular, common-sense election reform will help ensure that not only every Connecticut citizen can easily register, but that every registered voter can conveniently vote,” Merrill said. 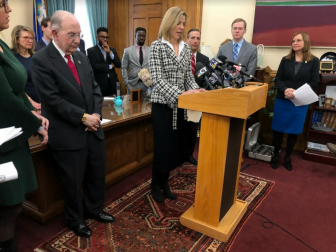 At the press conference Joanna Swomley, co-founder of Indivisible Greenwich was introduced by Secretary Merrill.

“Voting is a fundamental right essential to our democracy,” Swomley said. “At a time when many states and localities are enacting legislation to make voting more difficult, closing polling locations, shortening polling hours and otherwise attempting to suppress this fundamental right, we are thrilled that Connecticut is beginning the process to join the majority of states in our country who are making voting more convenient.”

She said states that provide for early voting range from 4 to 45 days, with an average length of 19 days.

Reached by email, Republican State Rep Livvy Floren said she is in total support of the initiative and has been for more than 18 years, ever since her days as Ranking Member on Government Administration and Elections.

“I am in full support of measures that increase voter engagement and participation,” Floren said. “This initiative allows a minimum of three days of early voting and removes restrictions to obtaining an absentee ballot from the state Constitution.”

Swomley said there are a variety of reasons voters cannot make it to the polls.

“Connecticut requires same day voting, but when things come up – a commuter problem, work hours, an illness, or aging parent – you can’t get to the polls that day,” she said.

“This Amendment is the start of a process that will make voting more convenient and thereby increase voter participation in Connecticut. That should be the goal of every citizen and every elected official,” Swomley continued. “We ask that each and every member of the State Assembly and the Senate vote yes and pass this legislation forthwith.”

Swomley said Early Voting is not a Democrat or Republican issue. “This is an issue of whether we are going to promote our democracy,” she said.

Merrill described a 2014 amendment to expand absentee ballots as poorly worded.  That amendment, which was not for early voting, failed to pass 491,447 to 453,070.

Reached by email, State Rep Fred Camillo said, “CT voters already rejected this in 2014. I fully understand the pressures that some people are under due to work constraints, but we have the AB option for them. I also don’t think it is too much to ask someone who requests an absentee ballot the reason for such a request. Lastly, I will continue to advocate for photo ID. I want everyone who is eligible to vote to do so, but I also support clean and fair elections.”

“This is the last frontier in terms of being able to make voting easier in our state,” said Senate President Pro Tempore Martin Looney.

Amending the Constitution is a multi-year process, and must be approved by both the Senate and Assembly.

“We want early voting on early voting,” said House Majority Leader Matthew Ritter. “We need votes. Not just Democrat votes. We need bi-partisan votes to make this an amendment in 2020. … Don’t just sit on the sidelines and vote no. What are your ideas?”

Nora Duncan, the Director of AARP Connecticut, said her group recommends no less than 15 days of Early Voting and no less than four uniform hours at every publicly accessible site.

Carol Reimers, President of CT League of Women Voters said, “We feel that voting is the cornerstone of our democracy, and voting is for the people. Too often elections become about the people running for office, or the people running the election system. It has to be about people coming to vote, and Early Voting helps make that possible.”