UPDATE: March 22, 2017
At Tuesday’s P&Z meeting, the commissioners vote to approve the application failed to pass. The vote, which took place around 1:30 am, was good news to neighbors who waited almost seven hours for the decision.

Voting to approve the re-subdivision with modifications were LePeter Levy, Andy Fox and Nick Macri.

Approval requires at least four votes, so the application was denied.

A proposed 3-lot subdivision at 500 Lake Avenue went before the Inland Wetlands and Watercourses Agency on Monday night. 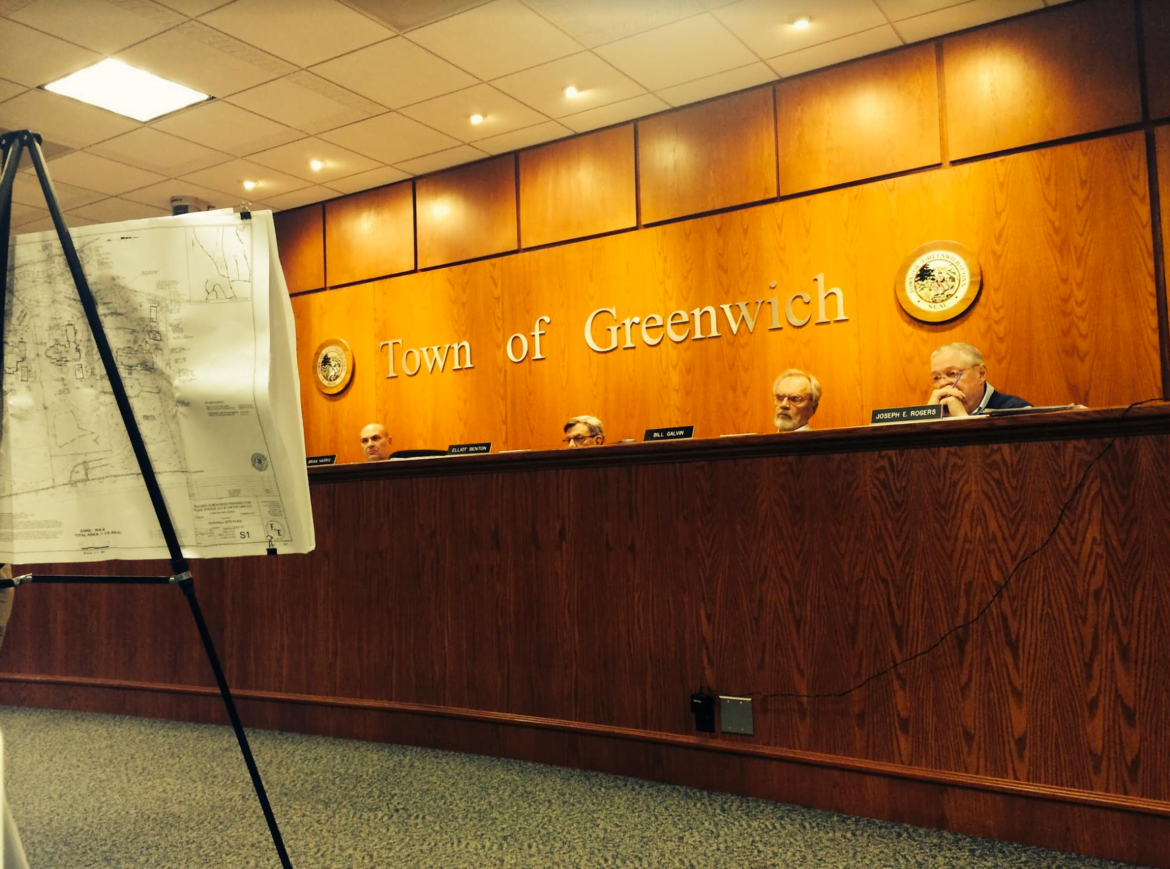 The Agency chair, Brian Harris was absent and vice-chair Elliot Benton chaired the meeting. A new Agency alternate, Peter Linderoth, was seated as a result. The applicants had a full cadre of professionals representing them including attorney Thomas Heagney, engineer Rob Frangione, and Matt Popp who is a landscape architect, wetland scientist and longtime former member of the Wetlands Agency.

The application is for special permit to develop within a Conservation Zone. Three new oversized homes are proposed for the site where an existing 1914 mansion will be demolished.

The controversy concerns the proposed access to the new homes from a steep wooded slope on Round Hill Rd, where neighbors have said sheets of water  already come off a steep hill stabilized by trees that the applicant seeks to remove. The existing mansion is accessed from 500 Lake Ave.

Denise Savageau, director of the Conservation Commission said the applicant’s maps did not include the topography of adjacent properties, including a parcel owned by Greenwich Land Trust.

“We have a wetland corridor with Horseneck Brook coming through,” she said. “This is an area that is a flood plane.”

Savageau said the the Town’s Drainage Manual talks about mitigating for storm water. “There are several ways to do that, but the number one is ‘mitigation by avoidance.’ If we avoid developing on these steep slopes, we’re not going to have this potential impact.”

She said the Round Hill Road area should be denied for access, which would preserve its scenic vista and roadside forest, as well as protect the vegetated slope adjacent to the open space.  She urged the Agency to insist the developer access the new homes from the existing drive off Lake Ave.

In a memo to Wetlands director Pet Sesto and P&Z director Katie DeLuca, Ms. Savageau said her commission did not recommend approval of the application as presented, and that in a Conservation Zone, development should be in keeping with low impact development.

“No access should be allowed off Round Hill Road as this area has very steep slopes and drains directly to Horseneck Brook,” she said on Monday night. 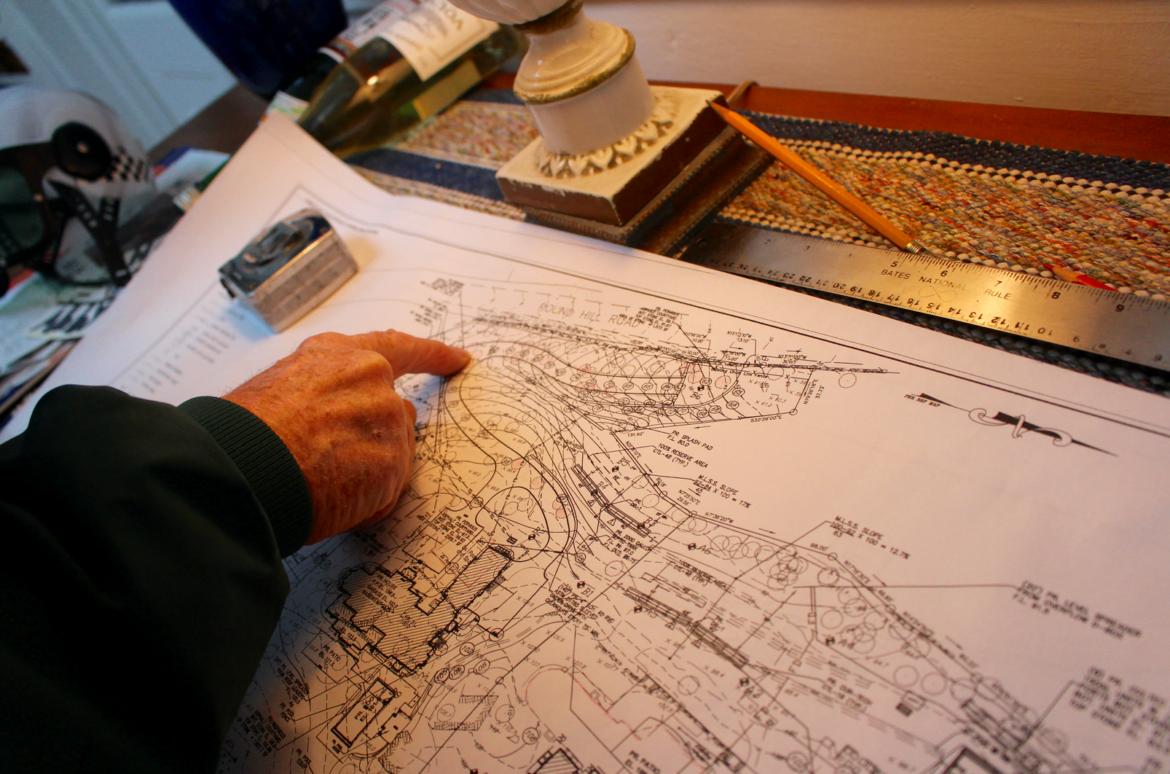 Route of proposed driveway for subdivision has numerous mature trees in its path. Photo Leslie Yager

Savageau’s memo said the conservation commission was concerned that the proposed rain garden would adequately handle runoff from the site once the steep slope was developed for the driveway, and that developments including deep cuts and multiple retaining walls on a steep slope are not in keeping with the POCD.

On Monday, Ms. Savageau said more information should be sought on impacts to and function of the corridor that includes the Land Trust wet meadow.

She said that upstream, the wetland corridor and Horseneck Brook have good water quality, but toward the center of the town there are problems with storm water and flooding. “Protecting that upland flood storage is just critical in terms of our overall drainage corridor,” she said. 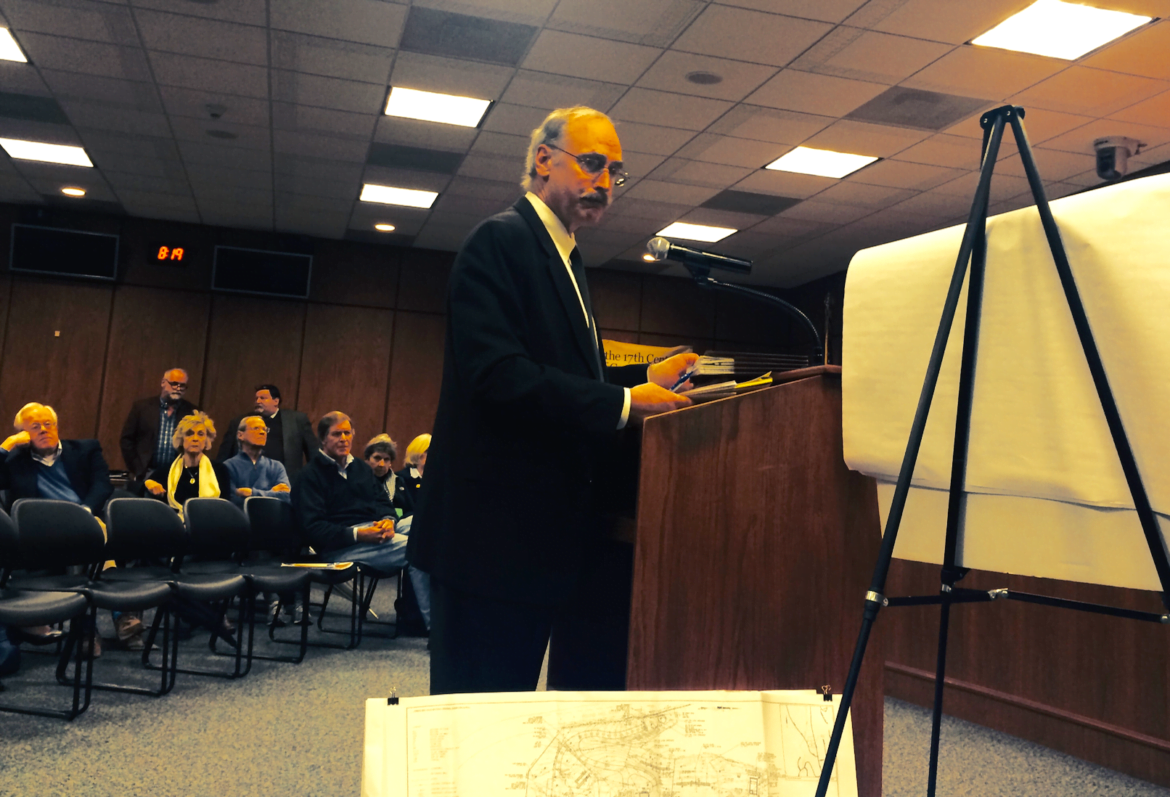 Attorney Heagney said the development site was once part of a 35-acre site that was subdivided into ten lots in 1983. He said that at that time, several acres including an area of wet meadow were given to the Greenwich Land Trust, but that with a today’s re-subdivision, it is not a requirement to again set aside open space.

Heagney said that while the proposal would remove about two dozen mature trees, “We are also showing significant stately trees we want to preserve, as well as restore the wetland pocket to the north,” he said, referring to the area close to Lake Ave, just south of French Farm, which is part of a wetland corridor. “The areas that are currently lawn, and have been mowed, will be re-vegetated as a wetland buffer.”

“I say, I’m building in disturbed areas. I’m enhancing areas that are already disturbed, and setting them aside in a buffer area. I’m treating the water. My driveway is going out to Round Hill Road. I’m staying more than 100 ft away from the wetland on my adjoining property. I don’t see any impact to the wetlands here.”  Thomas Heagney, attorney for the applicant

Heagney said the alternative is to maintain the status quo, to ‘do nothing’ and develop two lots. “There are areas of wetlands that are being mowed…. What I see is an improvement,” Heagney said. 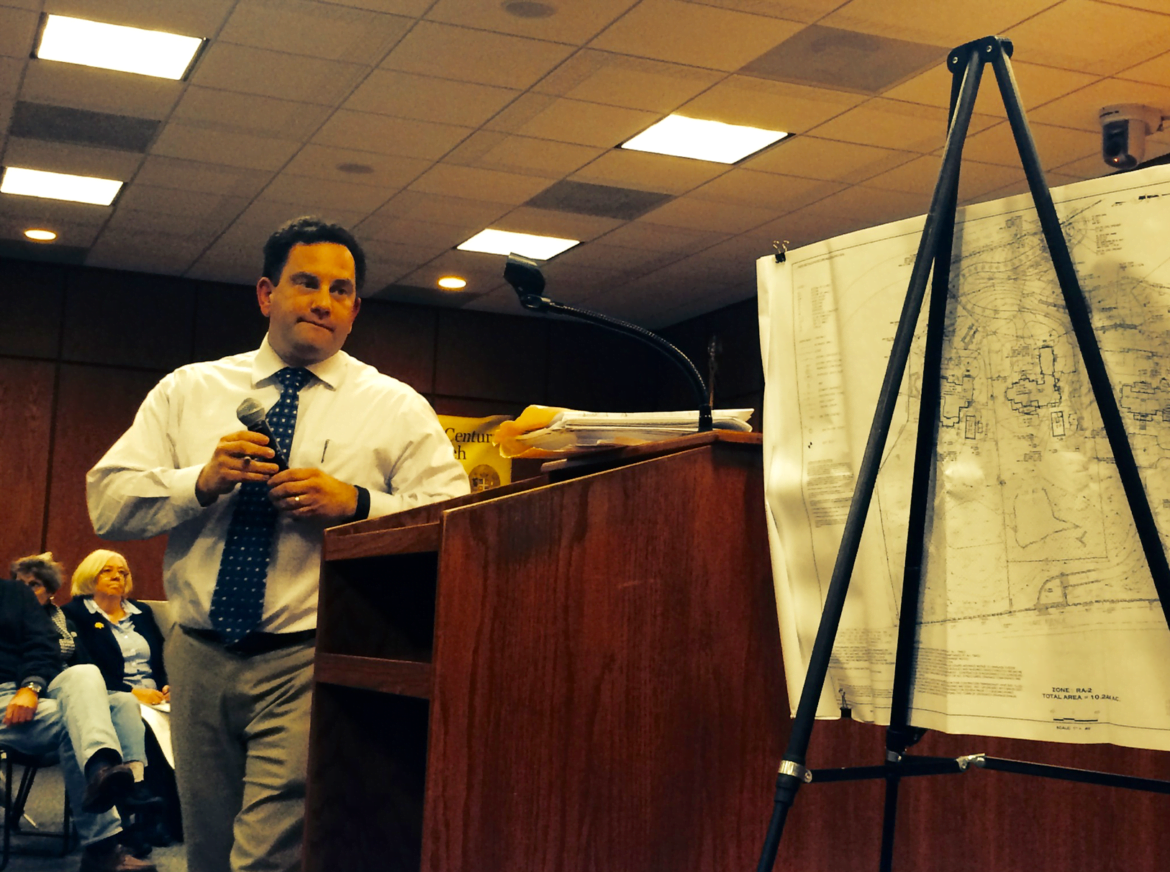 Wetlands scientist Matt Popp, hired by the applicant, said that in his opinion the proposal would have a beneficial impact.

“We’re converting a lawn one-acre in size to a wet meadow,” he said, referring to the lawn on the Lake Ave side of the property. “There would be a beneficial impact to the wetlands because we’re restoring lawn to wet meadow.”

Joseph Rogers told Mr. Frangione he was concerned about runoff on the steep slope once the trees are removed. “If you take the trees out, there’s concern you’ll increase flooding. Have you done the calculations?” he asked.

“Yes, we did full a storm water analysis. Storm water design takes into account the loss of trees. There will be no increase in runoff,” Frangione replied. “Everything drains toward the Land Trust property… We’re not sending anything out toward the road. Just in case, it will get caught in the rain garden before it goes into the Land Trust property.” 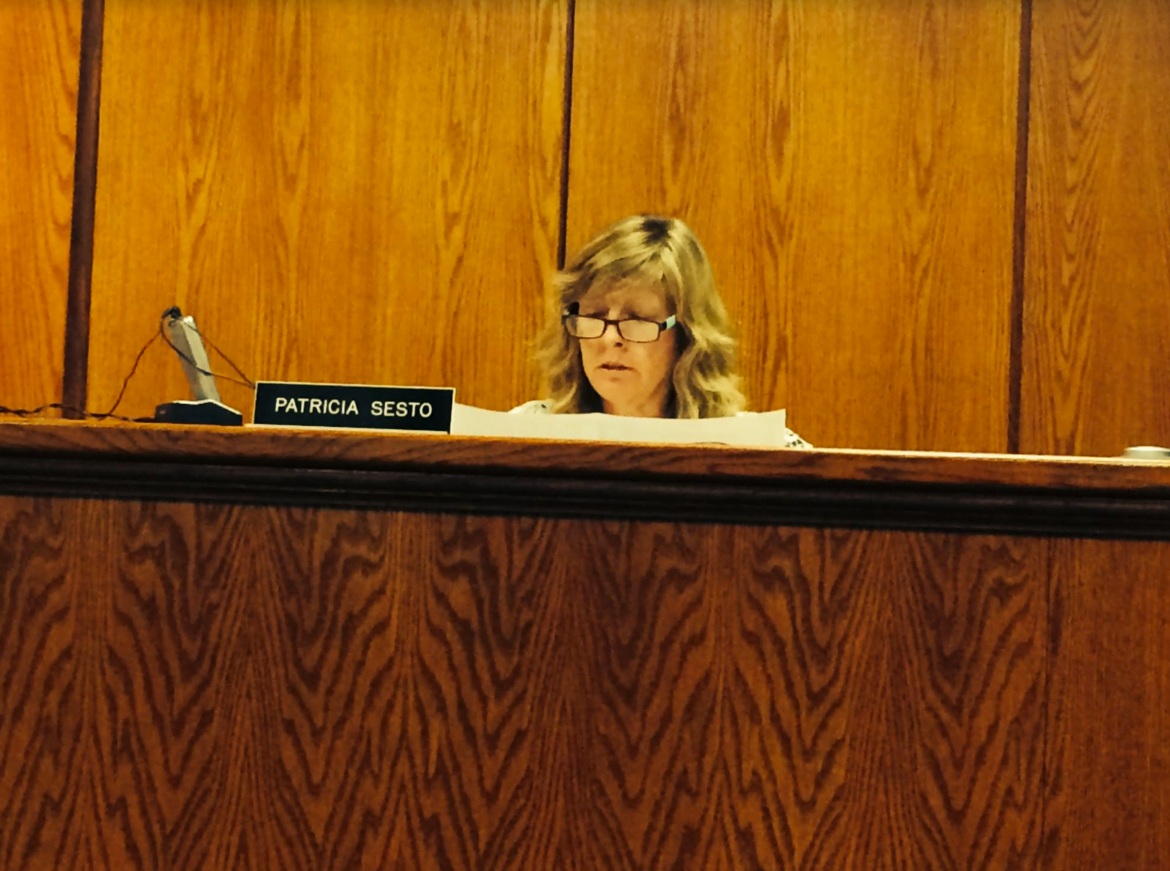 Ms. Sesto said she agreed that the mitigation plan to restore the wetland by Lake Ave is “great,” and that she was fine with the placement of the houses.  She did question why Frangione’s drawing had the proposed driveway at a minimum of 20 ft wide and as wide as 24 ft in some areas.

“The driveway will have to be wide as it swings around the corner, much more than 18 ft. It needs to be 20+ ft to make the turn,” he replied. “If you have a car coming up and down at the same time. Whether or not it is technically a lane, it is going to feel like one. They need to safely maneuver.” 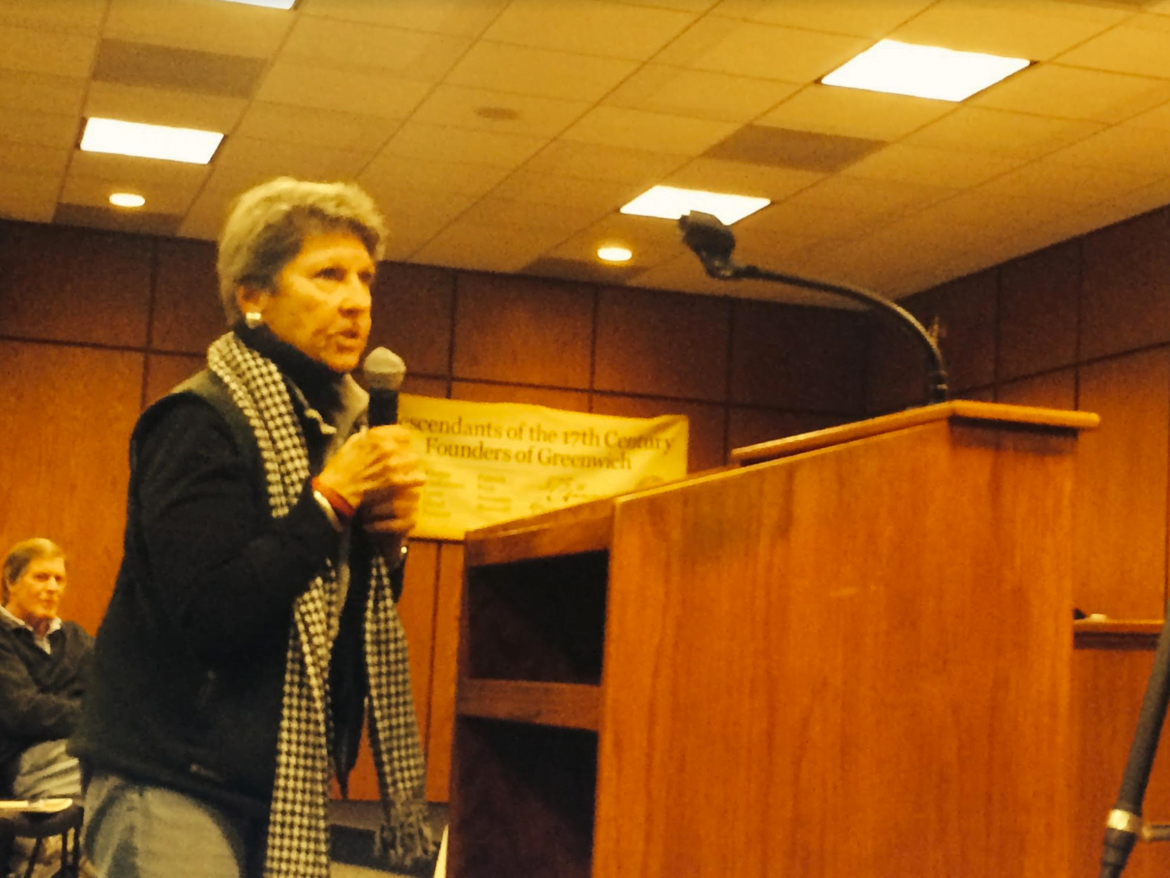 Susie Baker appealed to the Wetlands and Watercourses Agency to err on the side of conservation, citing concern for disturbance to the adjacent Greenwich Land Trust property. Jan 23, 2017 Photo: Leslie Yager

Susie Baker begged the agency to err on the side of conservation. “The steep grade down to the Greenwich Land Trust property deserves to be considered for avoidance. The existing driveway can accommodate all three lots.”

Louisa Stone, a former longtime Planning & Zoning commissioner who is also a member of the Round Hill Association and Greenwich Land Trust said, “Maybe what we need is an inland forest and hillside agency. This project would really destroy the forest that lies below the ridge and carve into the hillside. This property is part of the scenery that makes Greenwich special.”

Ms. Stone said, “If you don’t do it, the P&Z commission will be interested in whether this project is in accord with the POCD. It’s more than wetlands, it’s about the whole picture.”

Former Wetlands Agency member, Jim Carr, spoke as a member of the Greenwich Land Trust. He said the Land Trust is required to mow the property to maintain it in its natural state in perpetuity.

“I consider this a high value wetland,” he said. “The Land Trust wet meadow is home to wildlife. The Horseneck Brook provides water. The meadow provides food. But also, the adjacent forest is a habitat. These two basic habitats form a community and reinforce one another,” he continued. “If you degrade one, you degrade the other.”

Mr. Carr said the proposed driveway would effect the hydrology of the wet meadow.

“I count up to 30 trees, though applicant may have a different count. The ones they don’t cut down, will have roots cut and will be impacted….Construction of the driveway will lead to more runoff,” he said.

Mr. Carr said as it is, the Land Trust has a limited window of time to mow the wet meadow. “Will project upset the delicate balance?” he asked.

“We would like to look at the idea of the meadow as a detention basin,” Mr. Heagney said toward the end of the hearing.

“I would summarize the answer as, ‘No,'” Mr. Benton said.

In the end, the Agency was not assured about the impact of developing the steep wooded slope for the driveway.

“There will be no increase. There may be a slight decrease in water that enters the meadow,” Mr. Frangione insisted.

Bill Galvin asked the applicant why couldn’t all three properties be serviced off Lake Ave. “Is it impossible?” he asked.

“I don’t see how we can put the driveway in here where the soil is poor, “Frangione replied. “We can’t meet the storm water manual because of the poorly drained soils. We can’t get the treatment required.”

“I’d like a definitive statement in the next iteration, answering, ‘Is it impossible to do what I’m asking,” Mr. Galvin said.

“How would you do it? You’re a good engineer,” Mr. Benton said. “Please see what is possible.”

Mr. Frangione agreed to take another look at storm drainage and flow rates.

The Agency’s 130-day review period ends in early March, leaving a month for the Agency to consider the application. A decision is expected to come at the Feb 27th meeting. 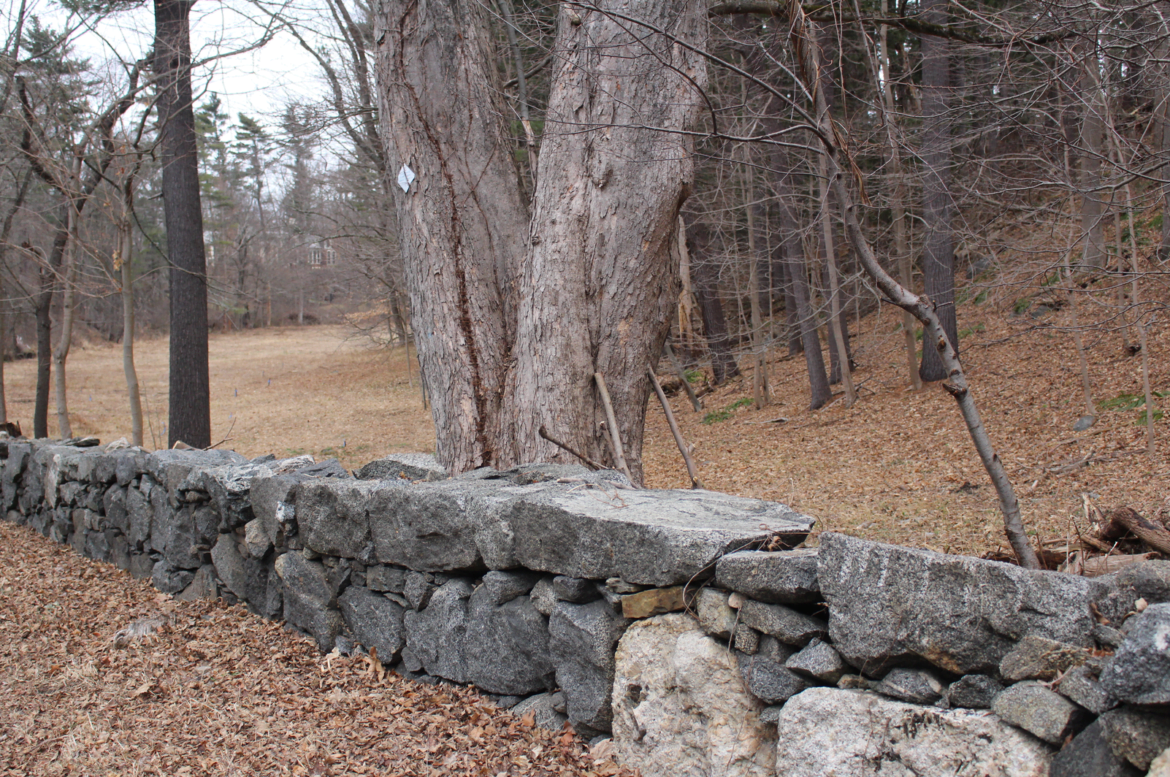 View of the Greenwich Land Trust property which includes a wet meadow (to the left). Jan 23,2017 Photo: Leslie Yager 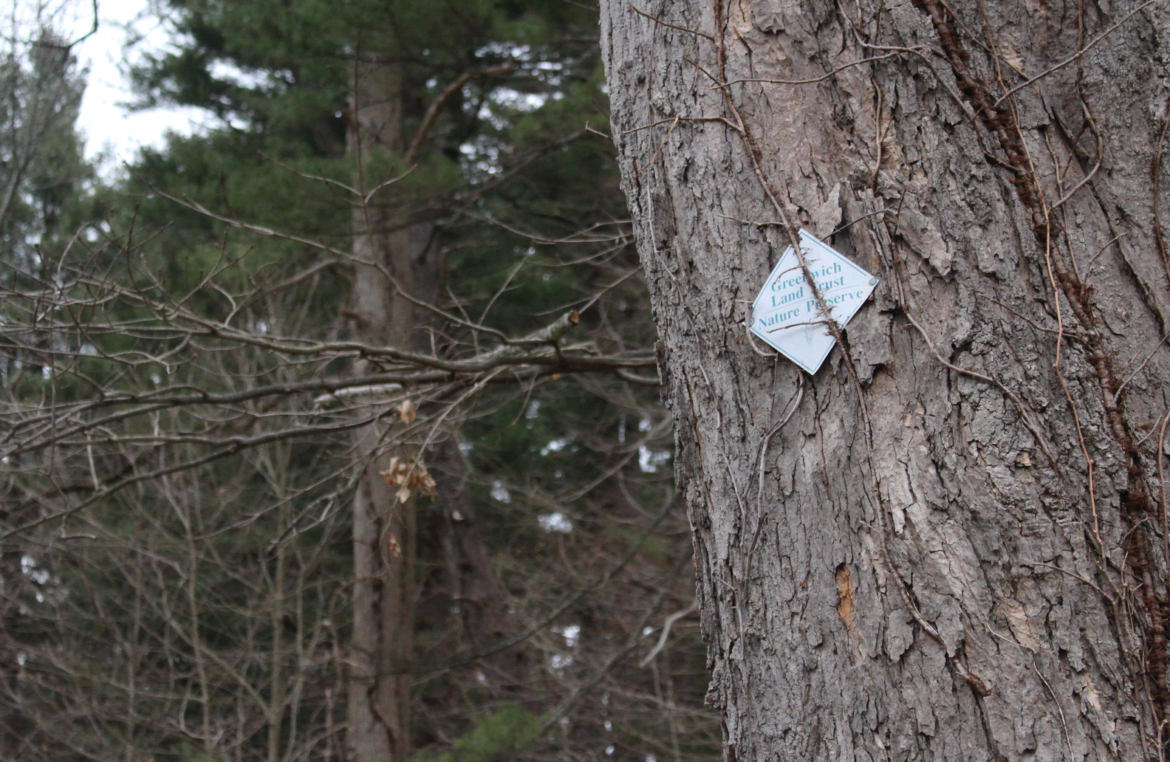 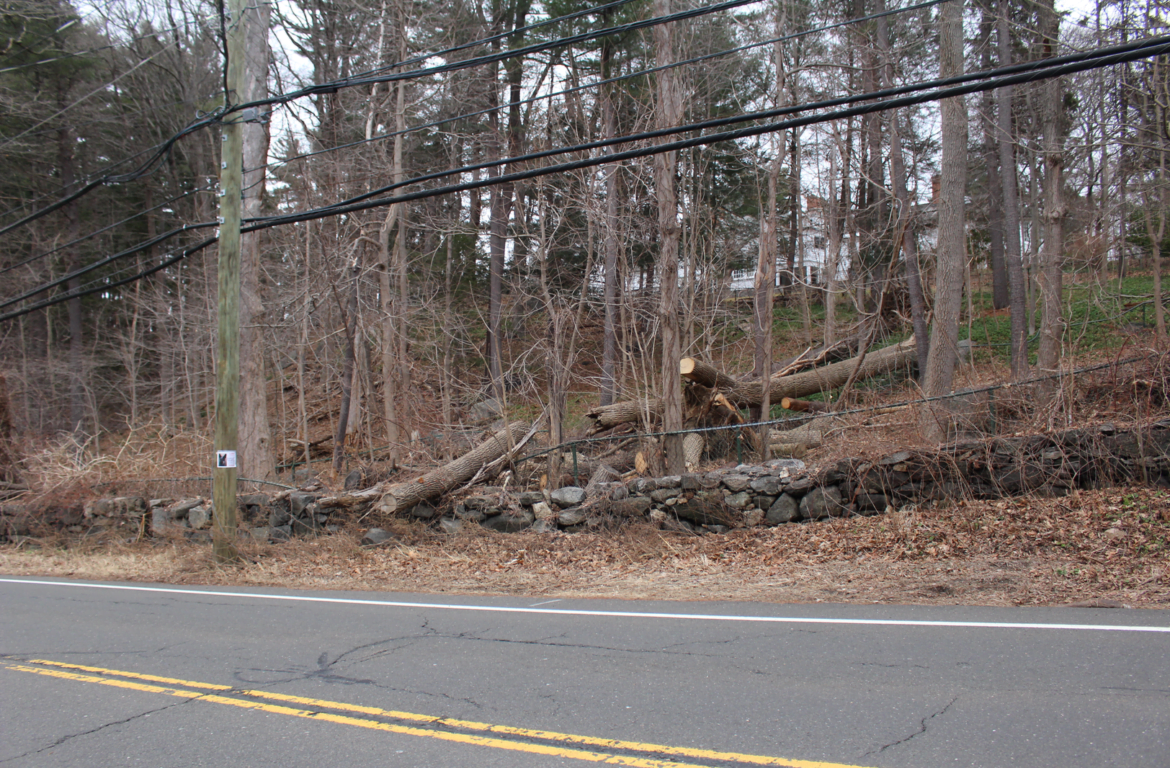 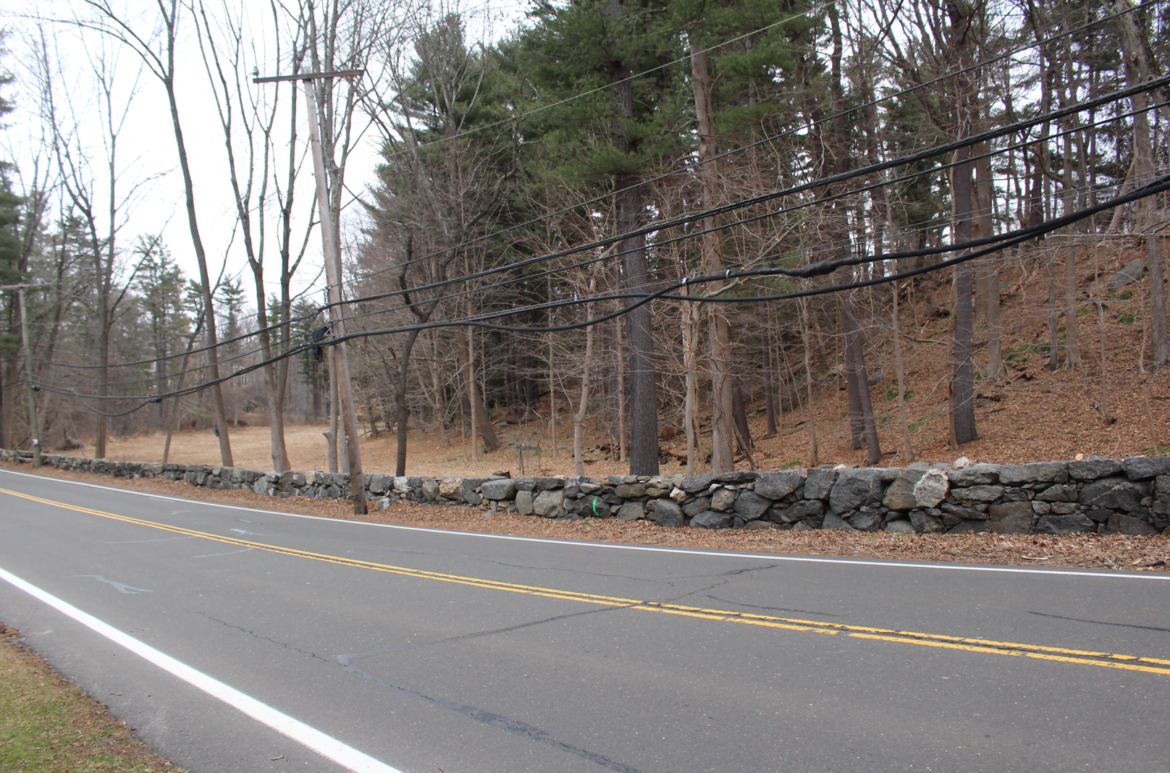 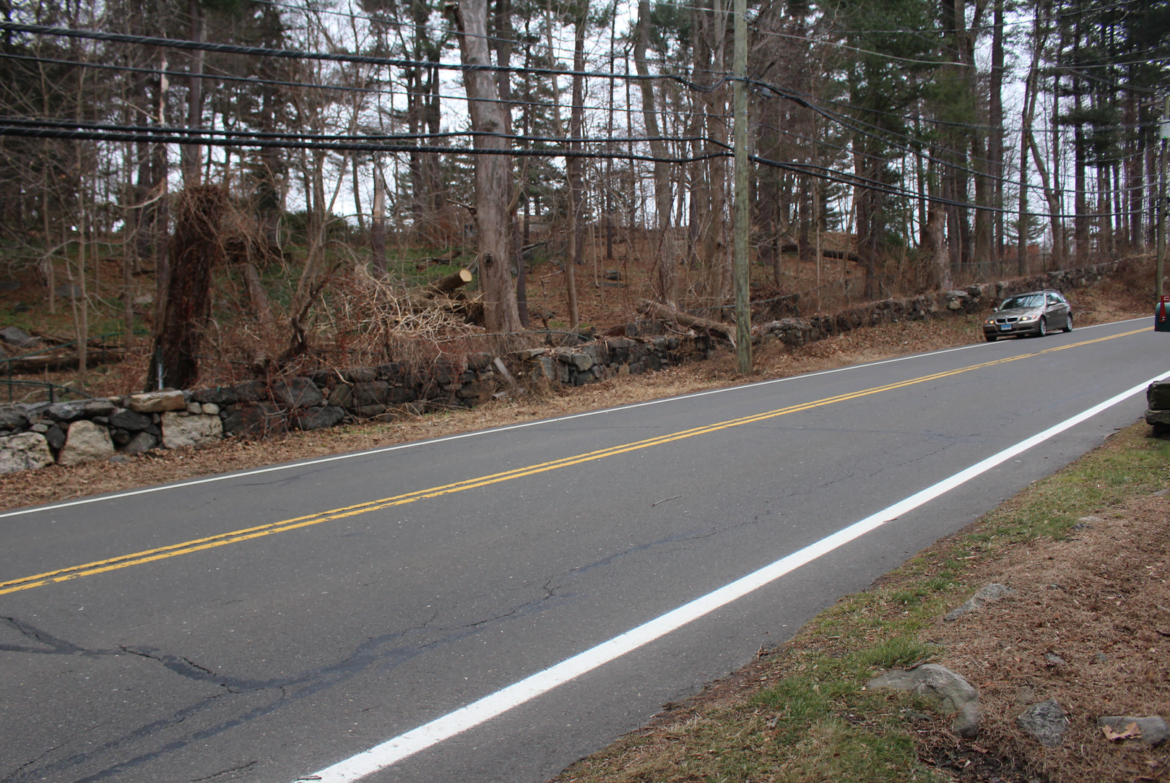