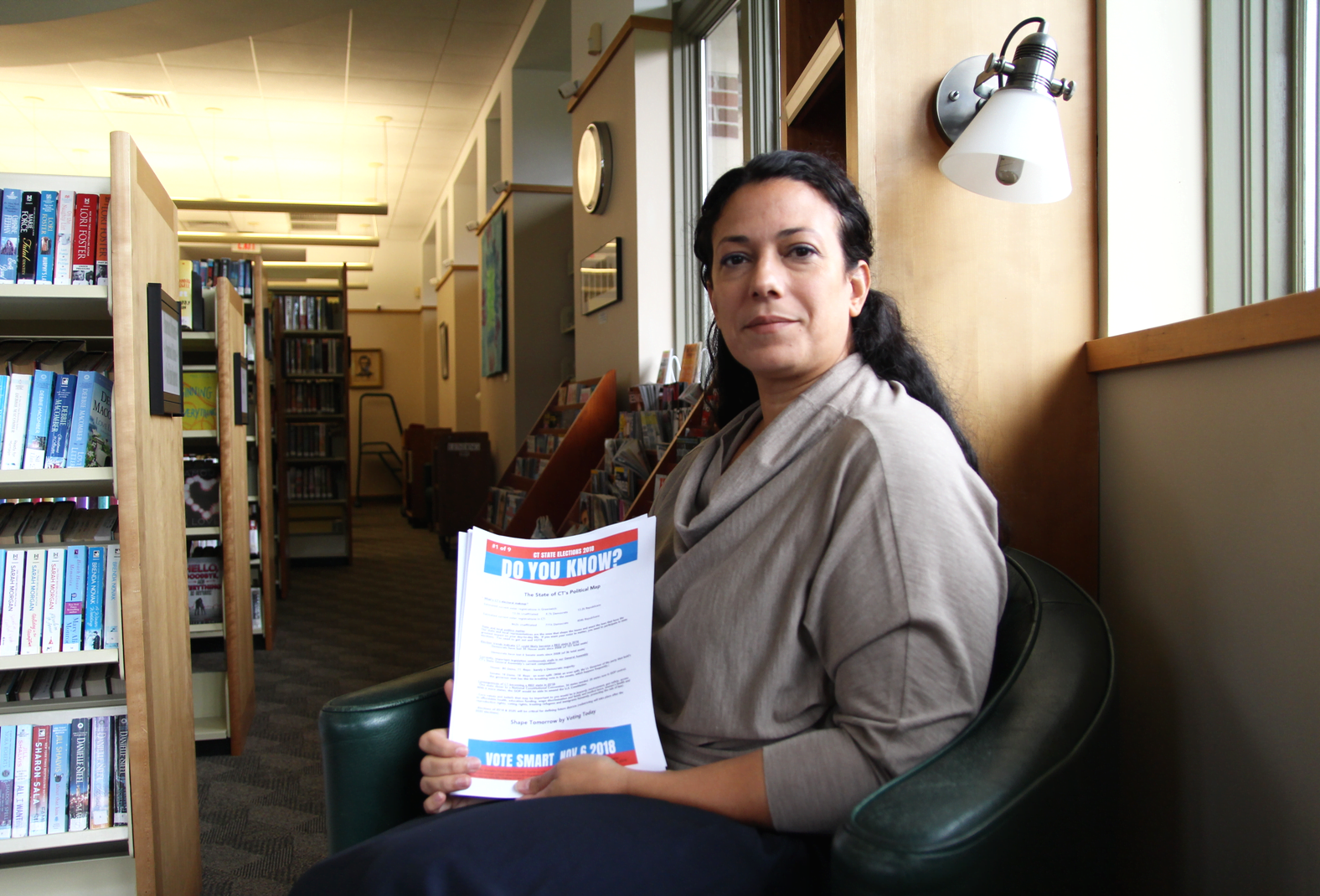 Two years ago a handful of residents founded Indivisible Greenwich, including Nerlyn Pierson. They describe themselves as an issues-focused, grass-roots organization opposed to the Trump agenda.

Pierson said Indivisible Greenwich is publishing a series of nine flyers in the weeks leading up to the Nov 6 election.

The nine “Do You Know” flyers are being distributed once a week by email to subscribers and will be handed out at train stations.

The information in the flyers, detailed below, is intended to educate voters on issues and candidates for the state House and Senate, because, as Ms. Pierson said, two years ago a focus on the presidential election came at the expense of awareness of local and state elections.

The goal of these flyers is to convince Greenwich residents it is important to cast an informed vote – whichever their party.

Pierson takes no credit for the flyers, explaining that a group of volunteers worked all summer researching the flyers.

“The goal is to be an informed voter on the date of the election. On either side, know who you are voting for and why,” she said.

What is Indivisible Greenwich?

Indivisible Greenwich was founded around the same time as March On Greenwich. While often the two groups are lumped together or referred to interchangeably, they are separate and have different goals.

March On Greenwich was founded after two Greenwich women returned from the Jan 21, 2017 women’s rights protests in Washington DC with galvanized interest in their town government.

They focused on Greenwich’s Representative Town Meeting, and successfully recruited dozens of candidates, mostly women. The result was the 230 member body went from a third women to roughly one half women. 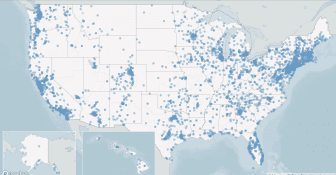 Indivisible Greenwich, however, is one of thousands of local Indivisible groups in the US that sprung up as part of a national grassroots movement to resist to the agenda of Donald Trump.

The group is focused on issues. In July they organized a Families Belong Together rally at town hall to protest the separation of immigrant children from their parents. Prior to that, in August 2017, they organized a rally against white supremacism and neo-Nazis after the tragedy in Charlottesville.

“Everything comes down to being informed with truth and facts,” said Pierson who has lived in Greenwich for eight years. “Inform yourself, then go out and vote.”

Pierson, who grew up in Miami was, like many Cuban-Americans, a Republican.

“When Castro came into power and the Cubans headed to Miami in the 1960s, it was the Republican party who supported them and introduced the law that allowed them to become citizens,” she said. “The Republican party was always very anti-Castro. And after  the Bay of Pigs with JFK, and how he pulled back and never provided the military assistance he promised, the Democrats were dead to them.”

Pierson said that while her relatives remained affiliated with the Republican party, she became a Democrat during college at Florida International University in Miami.

“I realized the views of the Republican party didn’t align with mine, mostly from a social piece,” she said.

In 2016 Pierson decided Indivisible was a good way to get informed and make a difference by reaching out to members of Congress and constituents.

“Early on we realized we needed a state focus. I realized there were a lot of laws being passed that I disagreed with, and thought were detrimental, were being done at the state level: gerrymandering, voter suppression, women’s rights, health care, gun laws, equal pay – all these things weren’t coming from the top but from the bottom up,” she said. “The more I learned, the more I realized the GOP has been extremely successful in churning out legislation state by state.”

“For us to make a difference, it comes down to voting at the state level” Pierson said. “I realized most people don’t even know who their local reps are. And people assume we are a blue state, but we are close to turning red.

Pierson said between 2008 and 2018, Democrats have lost 35 house seats out of 151. Currently in Connecticut, we’re tied at the Senate and only up by four seats in the house. The Lt Governor has a tie-breaking vote at the Senate. If nothing changes and GOP wins Governor race, they will control the Senate. 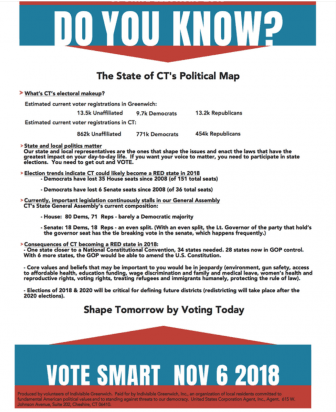 The first flyer is on the state of Connecticut’s political map with information including the estimated number of Democrats, Republicans and Unaffiliated voters in Greenwich, and in Connecticut, the composition of the state General Assembly.

The second flyer is about registering to vote and how to get an absentee ballot if necessary.

Pierson said she takes nothing for granted. She shared a recent article about how college students aren’t mailing in absentee ballots because they don’t know where to get a postage stamp.

The flyer also tells voters how to check to see whether they are registered.

Go to Vote.org and type in your name and address. You can even print out the form to register to vote and mail it.

The third flyer is about abortion rights. “Everyone who feels confident that Roe vs Wade was codified into state law, but that could be undone with a new governor, and if control of the House goes to Republicans,” Pierson said.

The fourth flyer will focus on the voting records of state representatives including education, voting rights and judicial nominations, as well as background on issues that Indivisible deems important to Greenwich residents regardless of their party affiliation.

Votesmart.org is a website where it’s possible type in a representative’s name and read their bio, view their voting history, learn their positions, and check their rankings on everything from the environment to guns.

The fifth flyer will be on the issue of tolls on I95 and how their representatives stand on that issue. Pierson said Indivisible thinks Smart Tolls make sense.

The sixth flyer is on the importance of net neutrality, which wasn’t passed this past session. “Hopefully it’ll be reintroduced,” Pierson said.

The seventh flyer is about the state of Connecticut, and will highlight the areas in which it is successful.

The eighth flyer is tentative and may focus on getting out the vote or health care.

The ninth flyer is about voting rights on election day.

“I don’t think a lot of people realize you don’t need a photo ID or driver’s license to vote in Connecticut,” Pierson said. “You don’t even need an ID. If you don’t have anything that shows your name, you can vote by affidavit.”

Pierson said that in the last election she went with no ID to her polling place to check that the system was working. While she had success, she said, “There were issues that resulted in some people being turned away in a couple districts.”

Pierson added that many people are unaware that in Connecticut there is same day registration on election day. “You can go to town hall, register and vote that way. As long as you’re in line by 8:00pm that evening you can register and vote.”

Also, she said voters may be unaware there is curbside voting for people who are incapacitated. “They can pull up to the curb and a poll worker will come out with the ballot. The driver has to come inside.”

The group is sending the flyers out once a week on Sunday nights to the Indivisible Greenwich mailing list and asking subscribers to share them through email and social media. They will also be handed out at train stations.

As each flyer is published, it will be added to the Indivisible Greenwich website.

To be added to email distribution list for the flyers, residents are invited to go to the Indivisible website to sign up. Or if they only want these flyers and don’t want regular emails from Indivisible Greenwich, voters can email [email protected]