On Saturday morning the thermometer hit 88° as over 400 people turned out to protest migrant family separations at the border with Mexico and demand an immediate reunification of those who have been separated, part of the Trump Administration’s “Zero Tolerance” policy toward immigration. 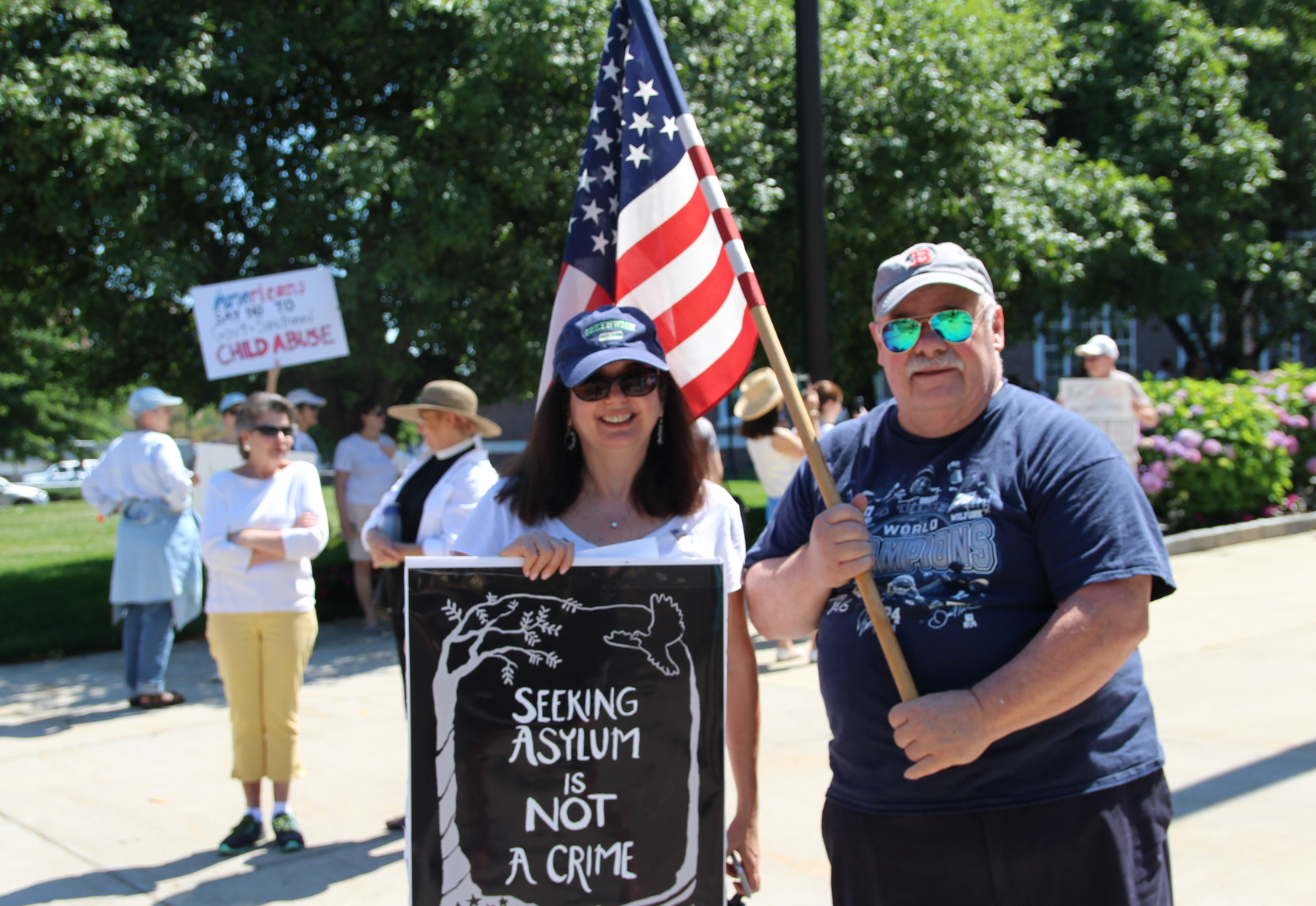 The crowd came with homemade signs saying, “Children Do Not Belong in Cages,” “Abolish Ice,” Greenwich Cares, and “Bring Humanity Back.”

Along Field Point Road, Carl White carried an American flag among protesters carrying handmade signs saying, “Keep Families Together” and “Seeking Asylum is Not a Crime.”

As cars passed by, and drivers honked their horns in support, Mr. White said, “There is nothing more important than this. This flag represents everything the country is built upon. There are documents such as the Constitution and the Bill of Rights, which includes the right to protest,” he said. “I’m willing to take a knee.”

“I love my flag and I served in Vietnam for four years. I didn’t serve my country to have someone disrespect our principles, particularly Mr. Trump,” White added. 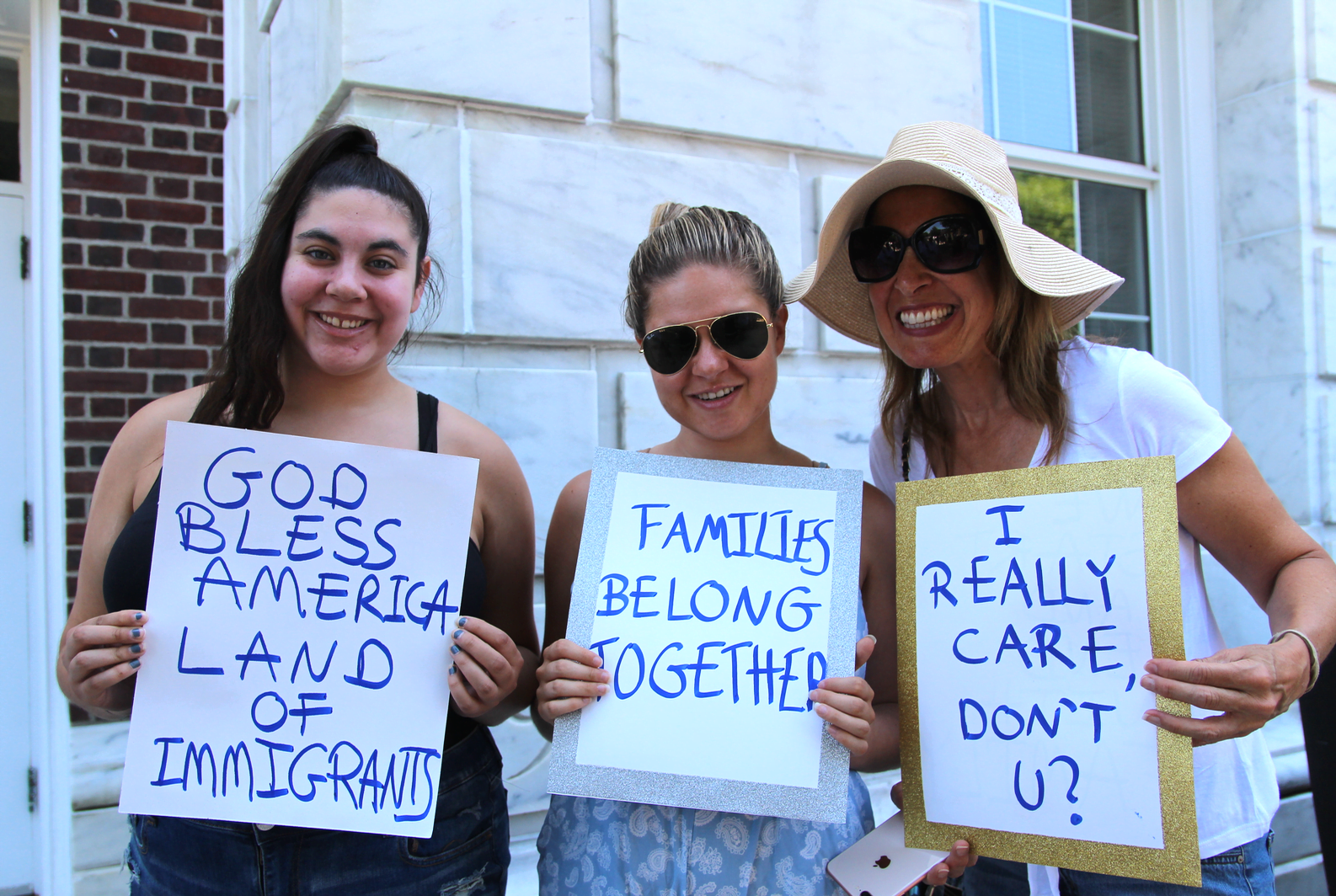 Senator Blumenthal asked the crowd if they were prepared to fight, and they shouted “Yes!”

“I am hoping Donald Trump hears you in New Jersey where at this moment, he is out on the golf course,” Blumenthal shouted.

“I visited the border a week ago and am haunted by a photo of a 2 year old girl in her father’s arms. She trekked across Mexico, literally walked across the deserts and braved coyotes and the traffickers to come to this country – the greatest country in the history of the world because we are a nation of immigrants,” he said to loud cheers.

“As she sat in her father’s arms, what I saw in her eyes was the anxiety and fear that she sensed and knew, because people were telling her she might be separated from her father. That should never happen in the United States of America.” 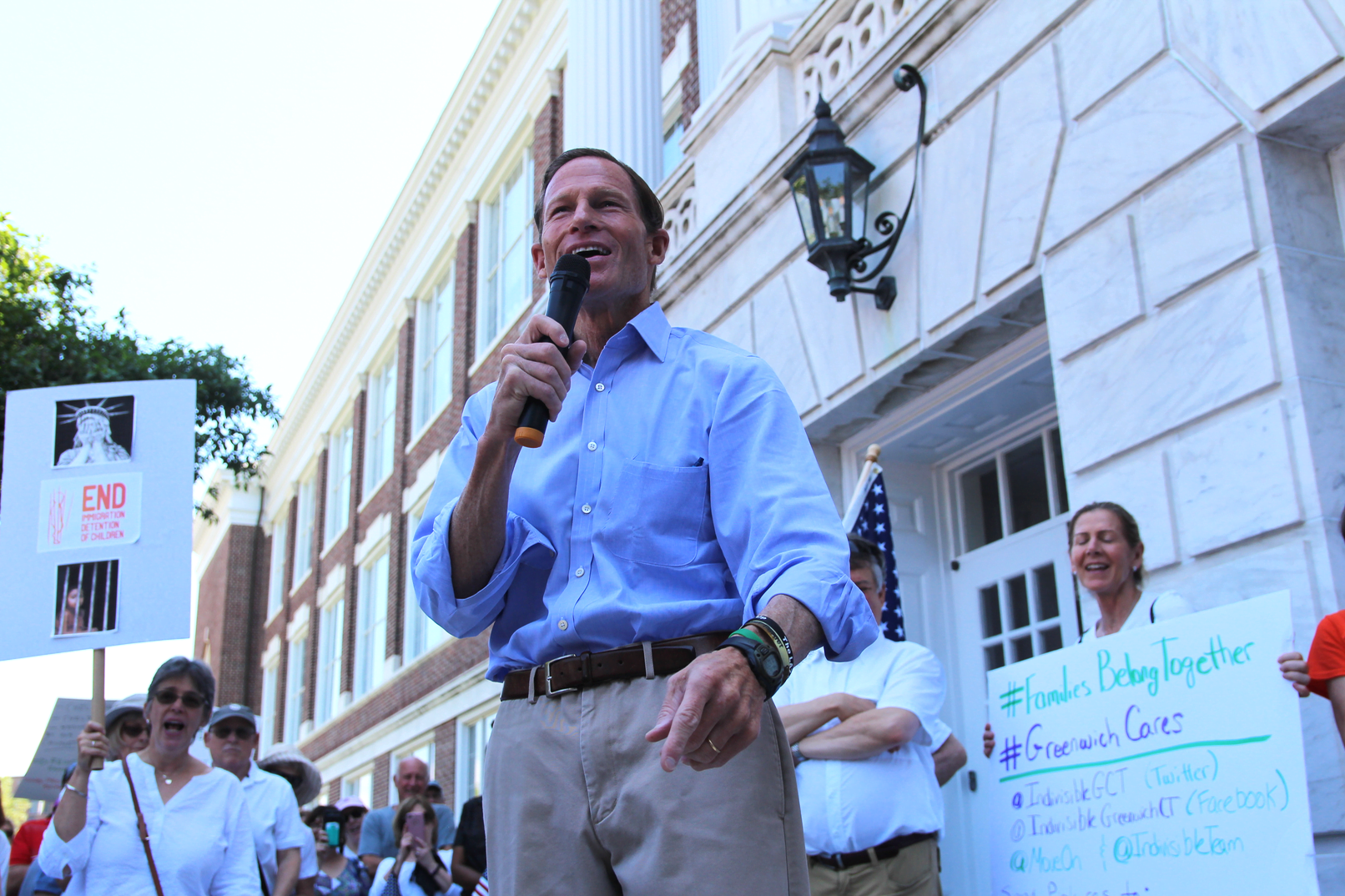 “Your being here today is critical because you will assure that inhumane, cruel, immoral policy will end!” he shouted to more loud applause.

“Now, Donald Trump issued a new policy through his executive order. Instead of family separation, now we’re going to have family imprisonment,” he continued to a chorus of boos.

“Mass tent camps on military bases. Think of it for a moment – on the military bases where the men and women who defend our freedoms and values live, we are going to put up tent cities, just like the internment camps of World War II, where people of Japanese descent were confined, in fact imprisoned. What a disgrace and disservice to our military and our country.” 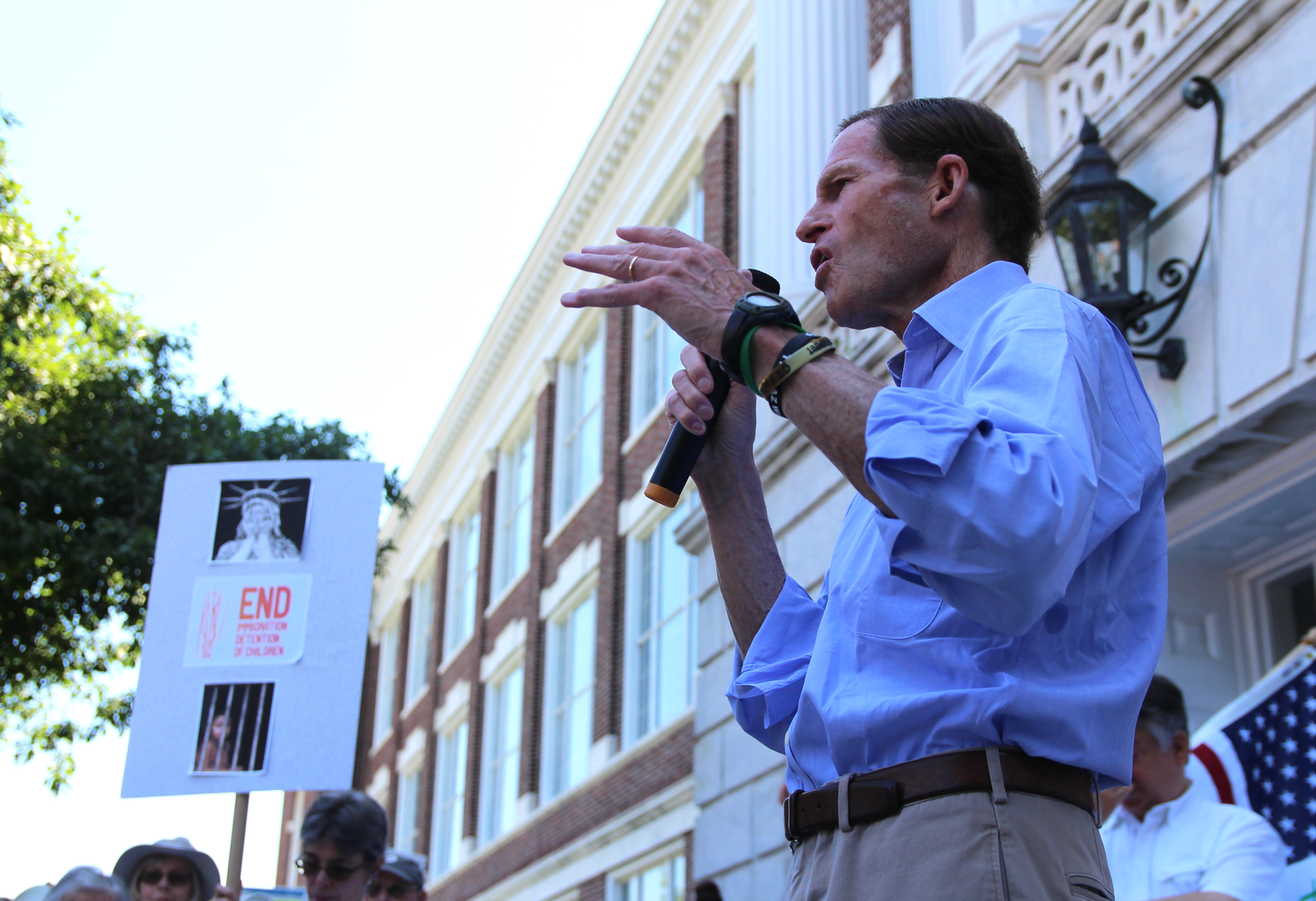 US Senator Richard Blumenthal addressed a crowd of over 400 people at the Keep Our Families Together rally at Greenwich Town Hall.J une 30, 2018 Photo: Leslie Yager

Blumenthal said he visited Tornillo, Texas — just outside of El Paso , where one of the first tent cities has been constructed. He said there were 20 people to a tent behind fences with barbed wire. “Inaccessible to the outside world, unable to hear or communicate readily with their families. That kind of interment, imprisonment, detention – call it whatever you want takes us back to the darkest chapters of our history. A stain on our history.”

“We need to rise up, mobilize, express outrage, make noise and do more!” he concluded to more applause and cheers.

Blumenthal said everyone present had an immigrant story.

“My dad came to this country in 1935. He was alone, 17 years old, spoke no English and not much more than the shirt on his back.

“This country gave him a chance to succeed. Nobody loved America more than my dad. I often think how sad and ashamed he would be of our country coming to this place,” Blumenthal said. 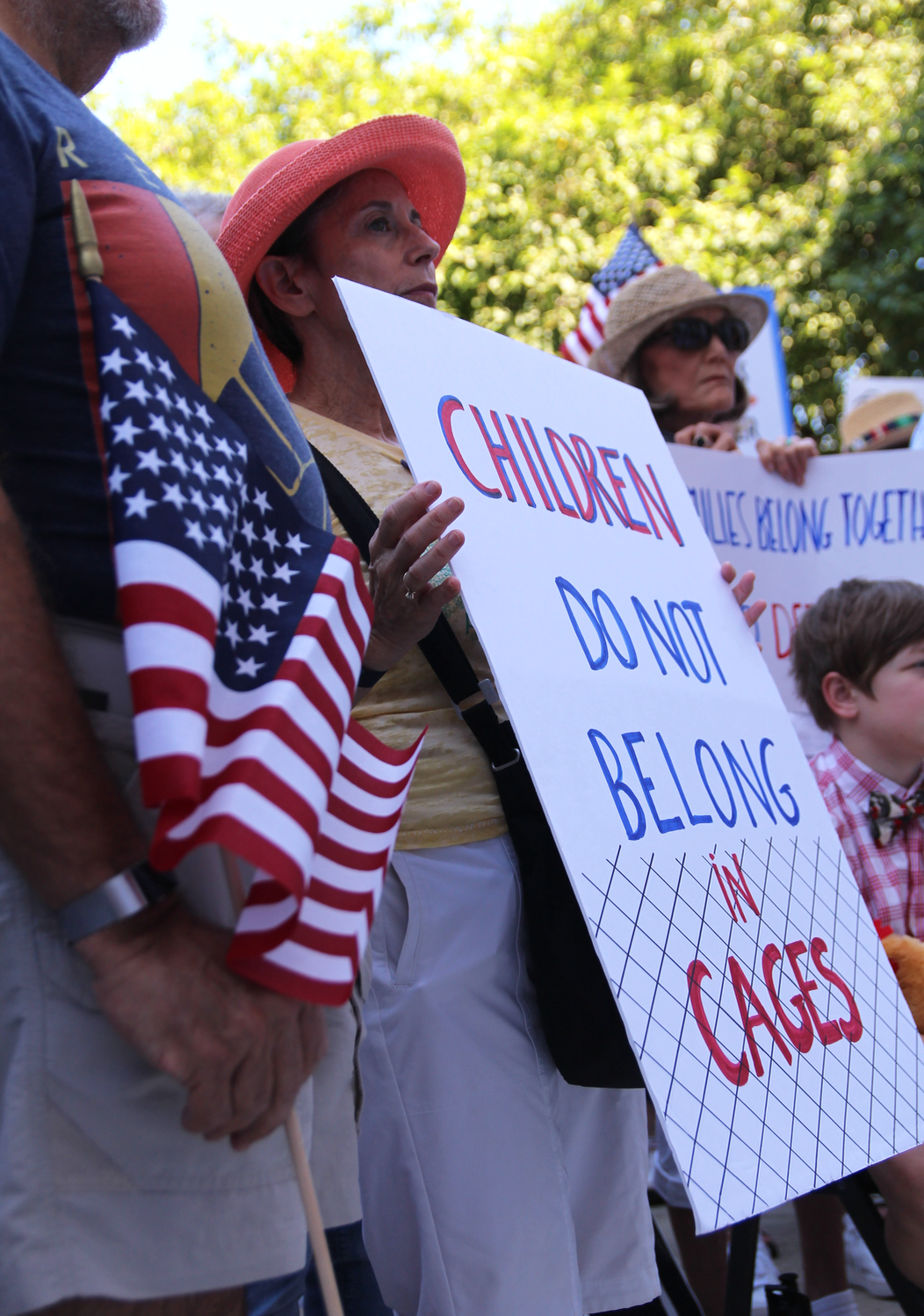 At times it was hard to hear the speakers as cars and truck driving down Field Point Road kept honking their horns in support.

The event was promoted by Indivisible Greenwich and was one of over 700 held nationwide, with the main event being held in Washington, DC.

“Children and toddlers were ripped from their parents, transported in the dead of night to black sites where they were hidden from the public, the press, representative of Congress and local officials,” said Indivisible Greenwich founder Joanna Swomley.

“Caregivers were prevented from comforting the children. What our government did is unconscionable and a stain upon our great nation. These children still have not been reunited nor is there any meaningful plan to get them reunited,” she added.

“The Trump Executive Order results in families being imprisoned indefinitely together. Parents should not be criminally prosecuted for doing what all parents would do – bring their children to safety. …We are better  than this,” said Swomley.

Swomley quoted Elizabeth Warren, Senator from Massachuetts who had flown Sunday morning to McAllen Texas and said the crisis at the border was far from over now that President Trump agreed not to separate parents from children, but rather to detain them together. 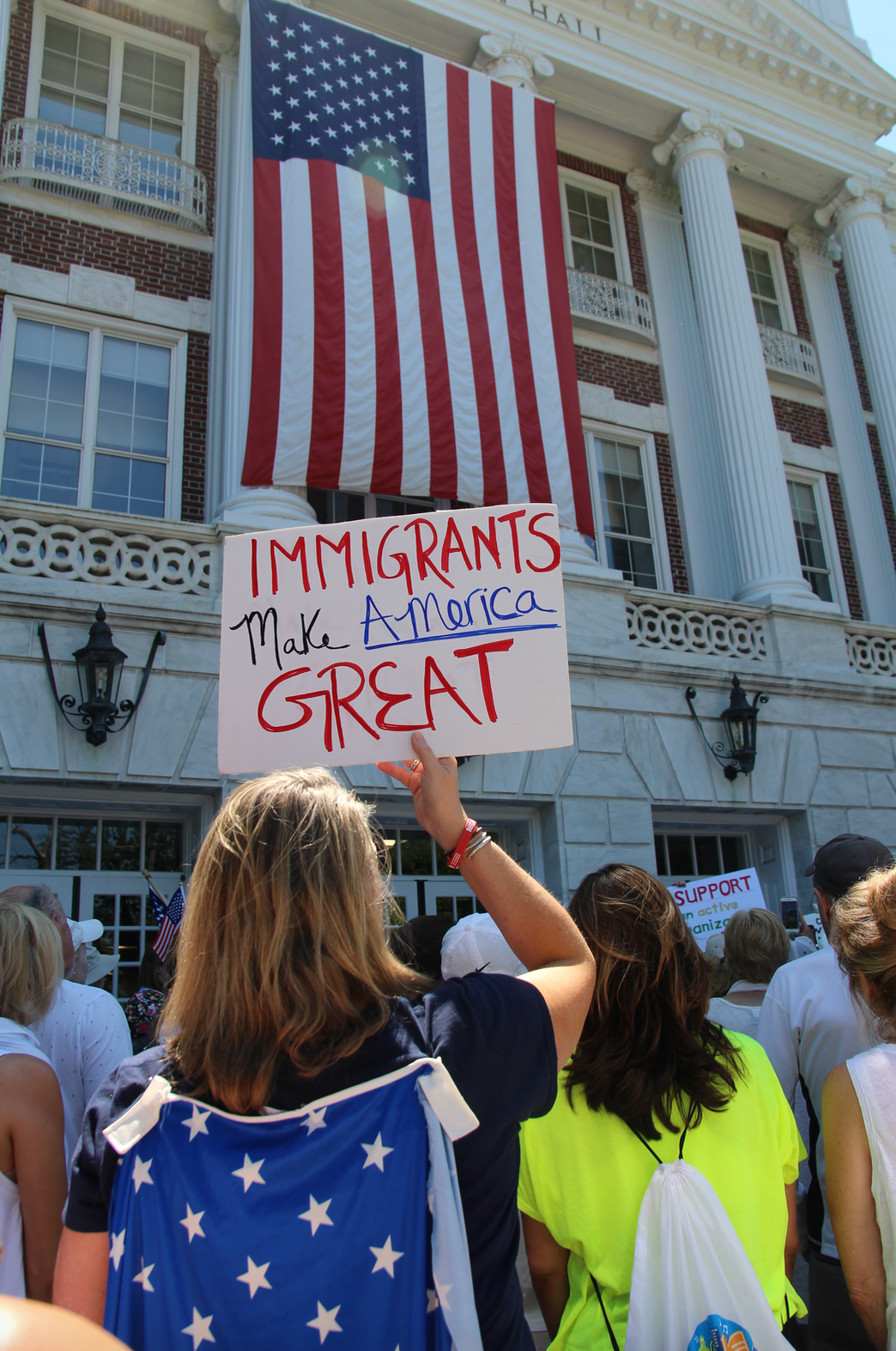 At the McAllen Customs and Border Protection processing center, Senator Warren said on the outside it looked like any other warehouse. Inside, her group was forced to watch what she described as a propaganda video full of dramatic narration about the ‘illegals’ crossing the border, “complete with gory pictures about the threats that these immigrants bring to the US, from gangs to skin rashes.”

She said a Customs and Border Protection employee assured her that migrants were never held more than 72 hours, but when a translator asked a group of men in one cage how long they’d been there, the answers ranged from a few days to two weeks.

“The stench – body odor and fear – hits the second the door is opened. The first cages are full of men. The chain link is about 12-15 ft high and the men are tightly packed. I don’t think they could all lie down at the same time. There’s a toilet at the back of the cage behind a half wall but no place to shower or wash. One man kept shouting, ‘A shower, please. Just a shower.”

In a cage full of girls, the children told Warren’s group that they had come to the US with family and did not know where they had been taken.

“Eleven years old. Twelve. Locked in a cage with strangers. Many hadn’t talked to their mothers or fathers. …The children were quiet. Early afternoon, and they just sat. Some were on thin mats with foil blankets pulled over their heads. They had nothing – no books,no toys, no games. They looked shell shocked.”

Warren met with members of the Texas ACLU, Texas Civil Rights Project and the Border Rights Center who talked about President Trump agreeing to no longer separate parents and children.

Swomley again quoted Elizabeth Warren: “The Trump administration may be ‘reunifying’ families, but their definition of a family is only a parent and a child. If for example, a nine year old crosses with an 18 year old sister or an aunt or uncle, or a grandparent, or anyone who isn’t the child’s documented legal guardian, they are not counted as a family and they will be separated.” 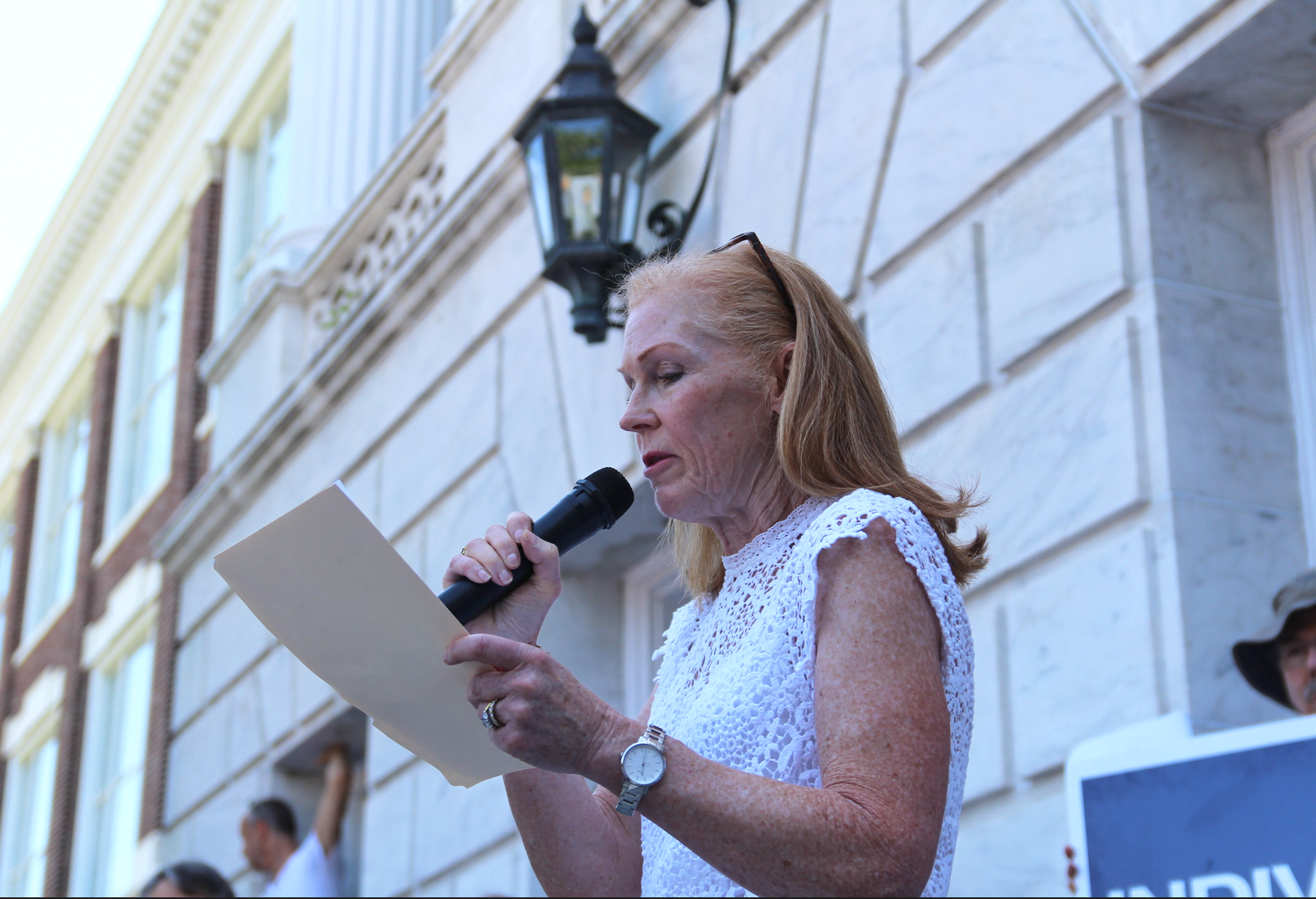 Mary Ellen Markowitz, a local psychotherapist who runs parenting groups was a featured speaker. She spoke about the permanent damage caused by separating children from their families. June 30, 2018 Photo: Leslie Yager

RTM member and mother of four girls Mary Ellen Markowitz, a local psychotherapist who runs parenting groups said, “If one baby, child or teenager of mine was ever ripped from my arms or home, I am certain that my heart would hurt so much that I would not be able to breathe.”

“The effects on the child are significant physical, emotional and developmental issues,” Markowitz continued. “The feeling of loss and fear that these young children experience as a result of the bond being broken between them and their most important caregiver can result in an inability to tolerate stress, an overreaction to stimuli, and less ability to tolerate frustration. They are also more at risk for anxiety, depression, aggression, violence, suicide and substance abuse.” 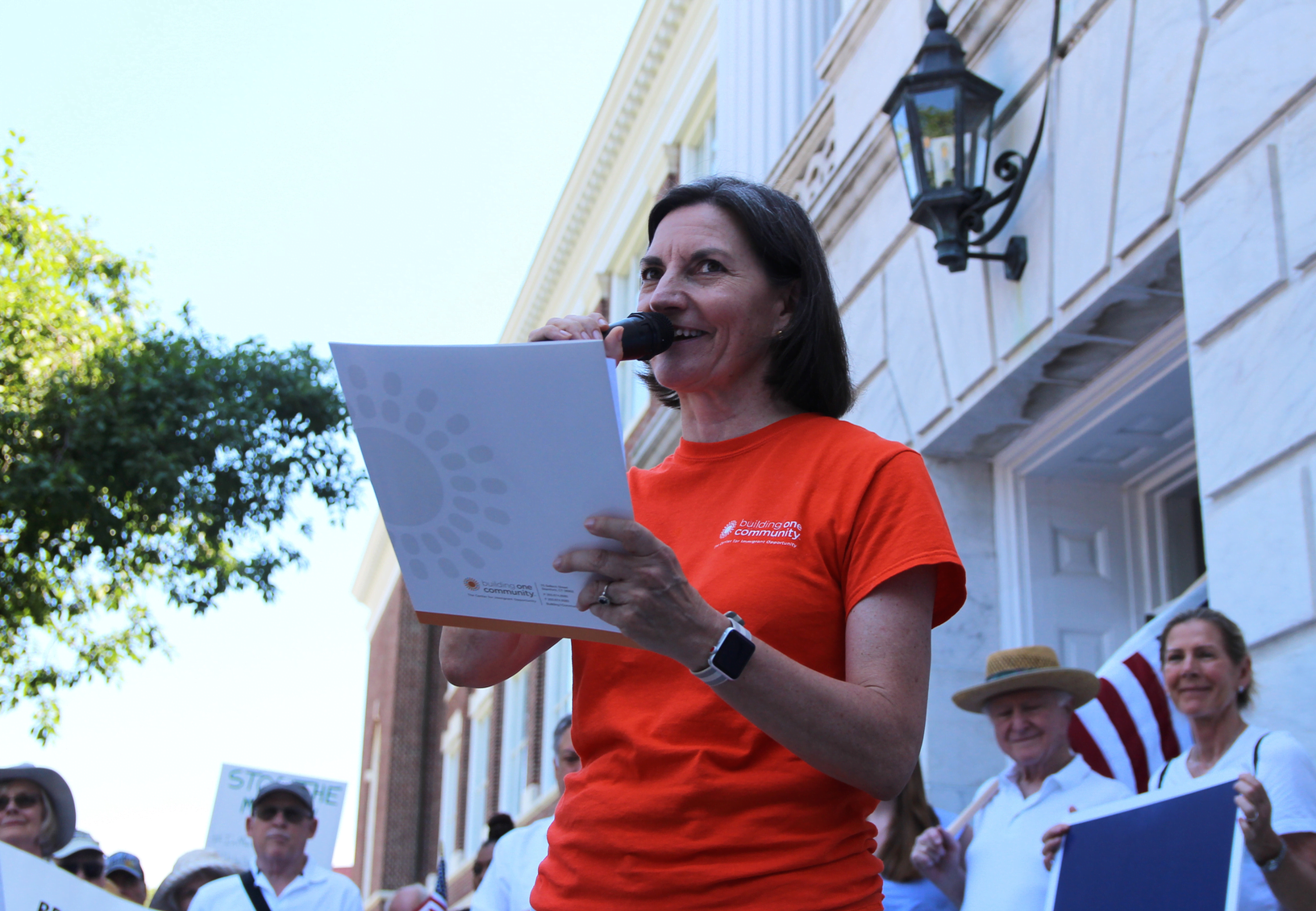 “I will not condone this administration’s strategy to terrorize families and criminalize immigrants,” said Catalina Horak of Building One Community. What happens today has touched me personally. Thirty years ago I chose to become an American citizen because of what this country represents. I wanted my children to grow up in this country.”

Horak said separations are happening in many different shapes and forms, and that the previous day she accompanied a woman to Hartford who has been a babysitter in Greenwich for over 20 years and has no criminal record.

“She has has a child in college and another who will be a senior in high school next year,” Horak said, adding that the woman got some bad legal advice 20 years ago, and this week she was told she will have to leave the US in August.

“Family separation looks like this in Fairfield County,” Horak said. “Many people in deportation procedures right now have worked for many years in Greenwich – as cleaning ladies, as landscapers. …Family separation takes many different forms in our community.”

Horak said there is a value to the collective voices over the 700 events across the country. “We will raise our voices loud and clear and call for the end of family separations and the suspension of due process at the border.” 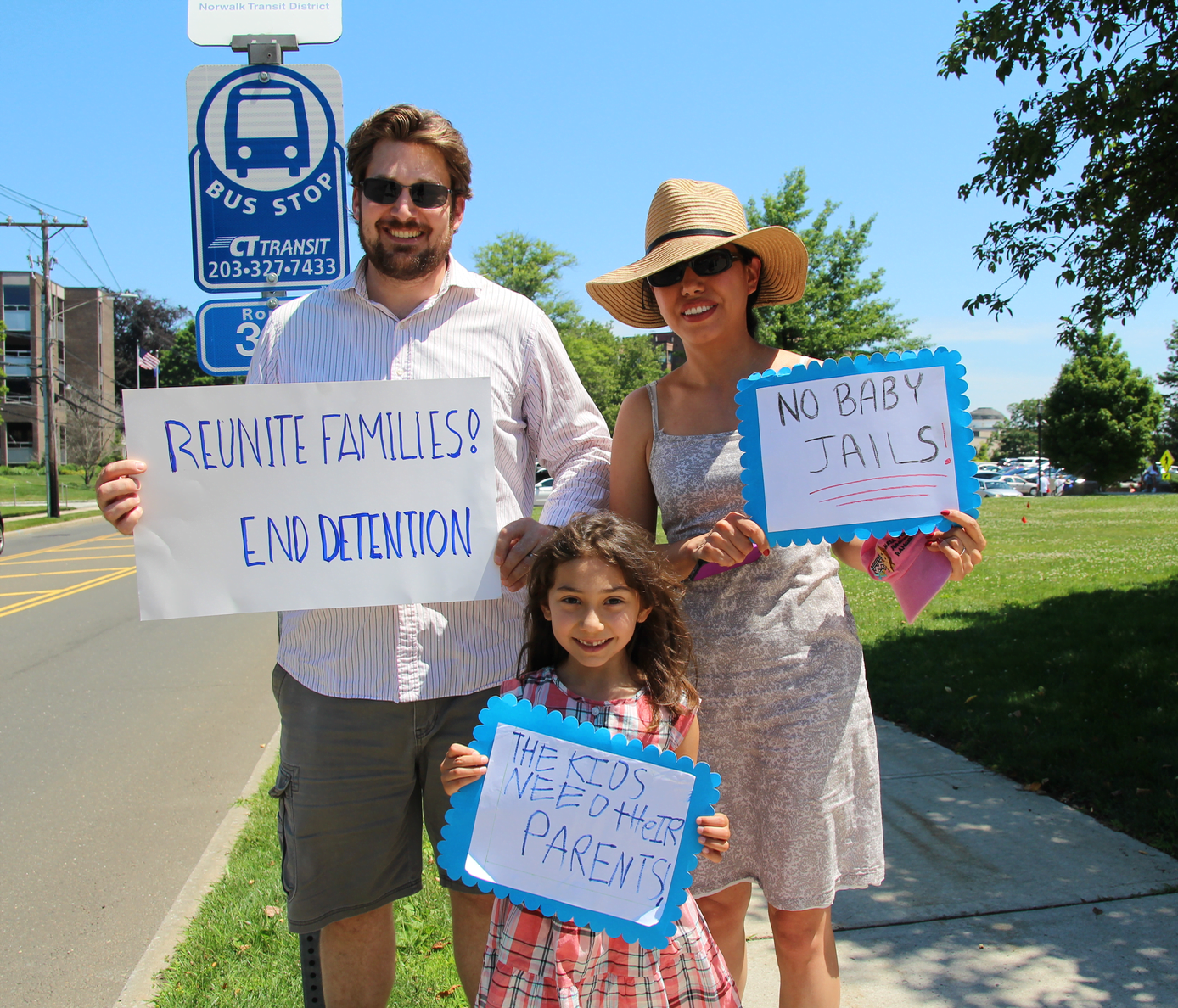 The Burhans of Weston drove to Greenwich to participate on the Keep Families Together rally. John, Georgia (6), and Lesslie. June 30, 2018 Photo: Leslie Yage 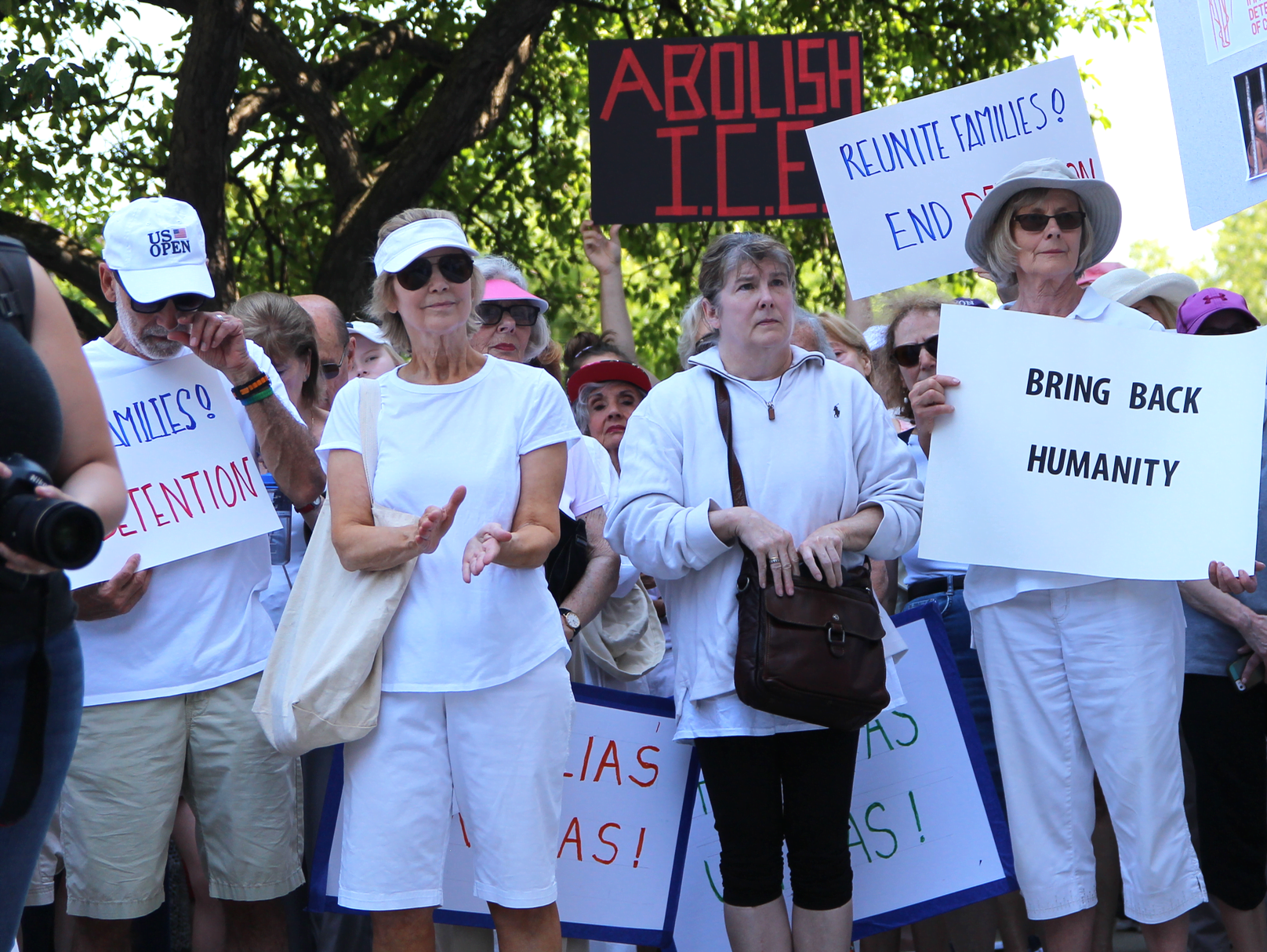 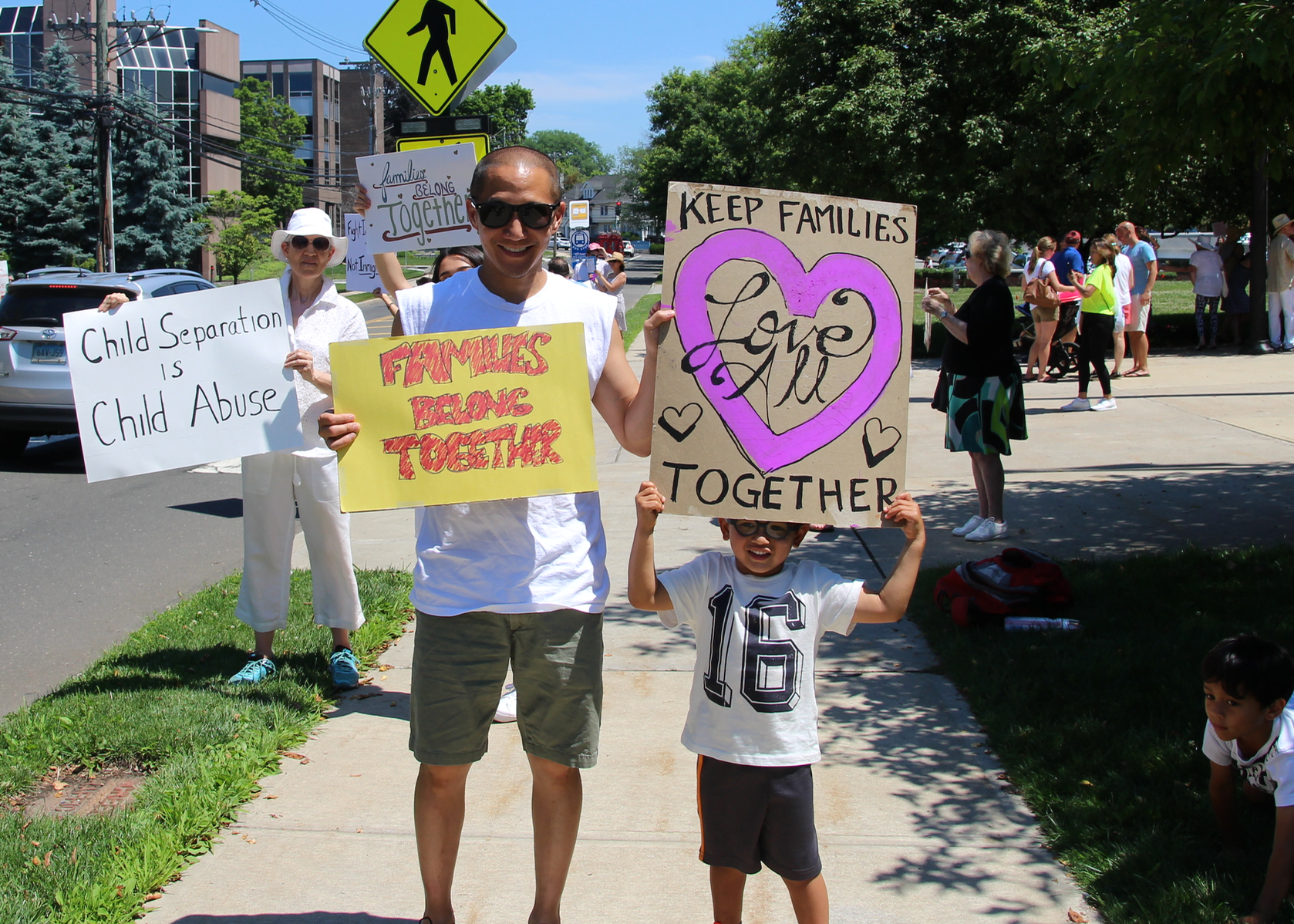 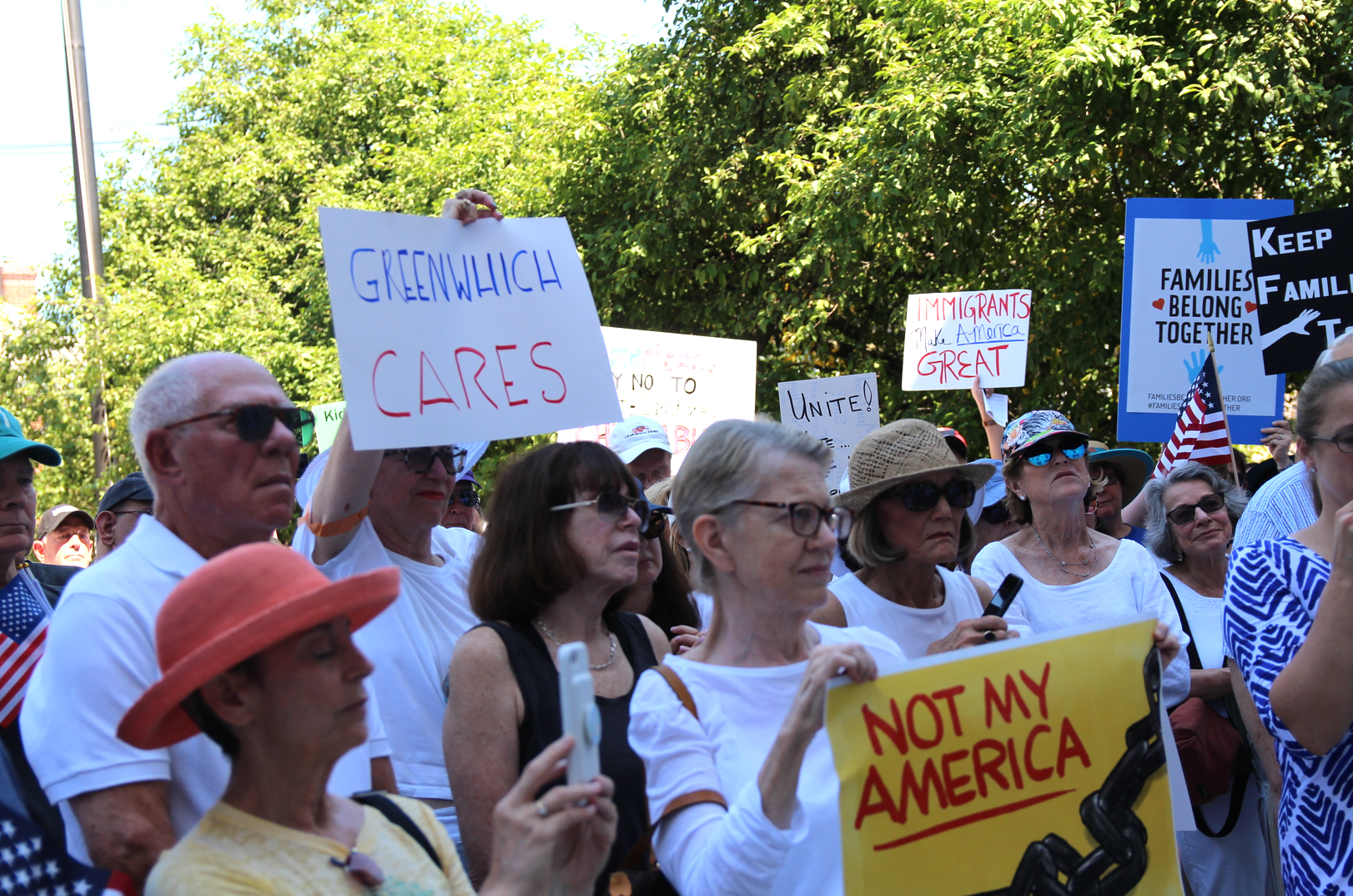 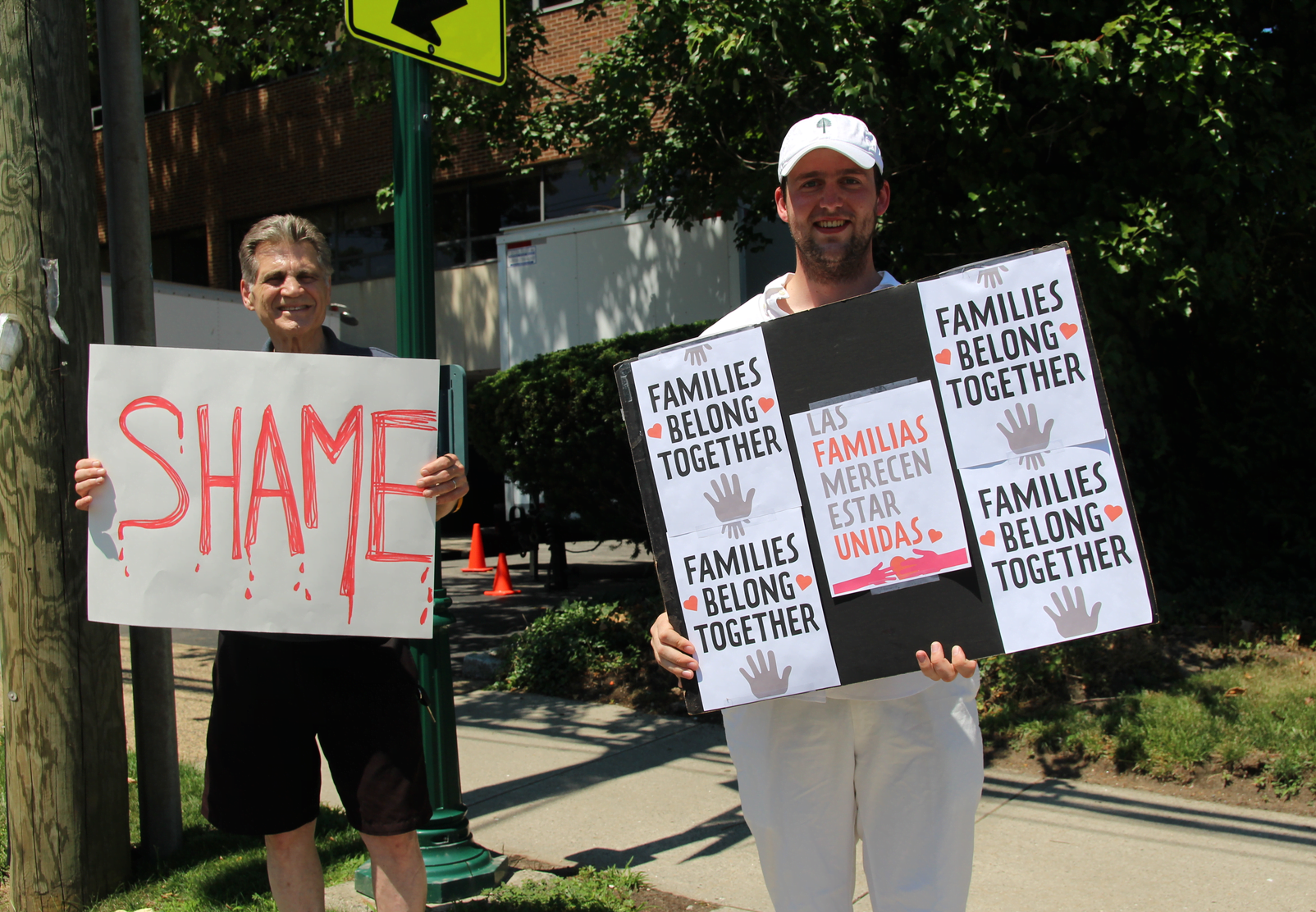 Democratic candidate for State Senate Alexandra Bergstein pointed to a handmade sign that asked, “What happened to family values?”

“How can you have family values if you don’t value families?” she asked.

Jonathan Perloe said the DTC denounced President Trump and his administration’s zero tolerance immigration policy as an inhumane and offensive solution for dealing with the country’s immigration problem.

“It has been called ‘a policy of willing cruelty,’ ‘immoral,’ ‘a shame to our country,’ ‘abusive,’ ‘unconscionable,’ ‘an affront to the decency of the American people,’ and an ‘ugly and inhumane practice’ by people on both sides of the aisle and around the world,’ he said.

After the rally, Jenny Steinberg of Greenwich said it moved her to tears. “It’s so emotional, it made me happy to see all the kids on their parents’ shoulders. That parents aren’t shielding them from this – they’ll be voters.”