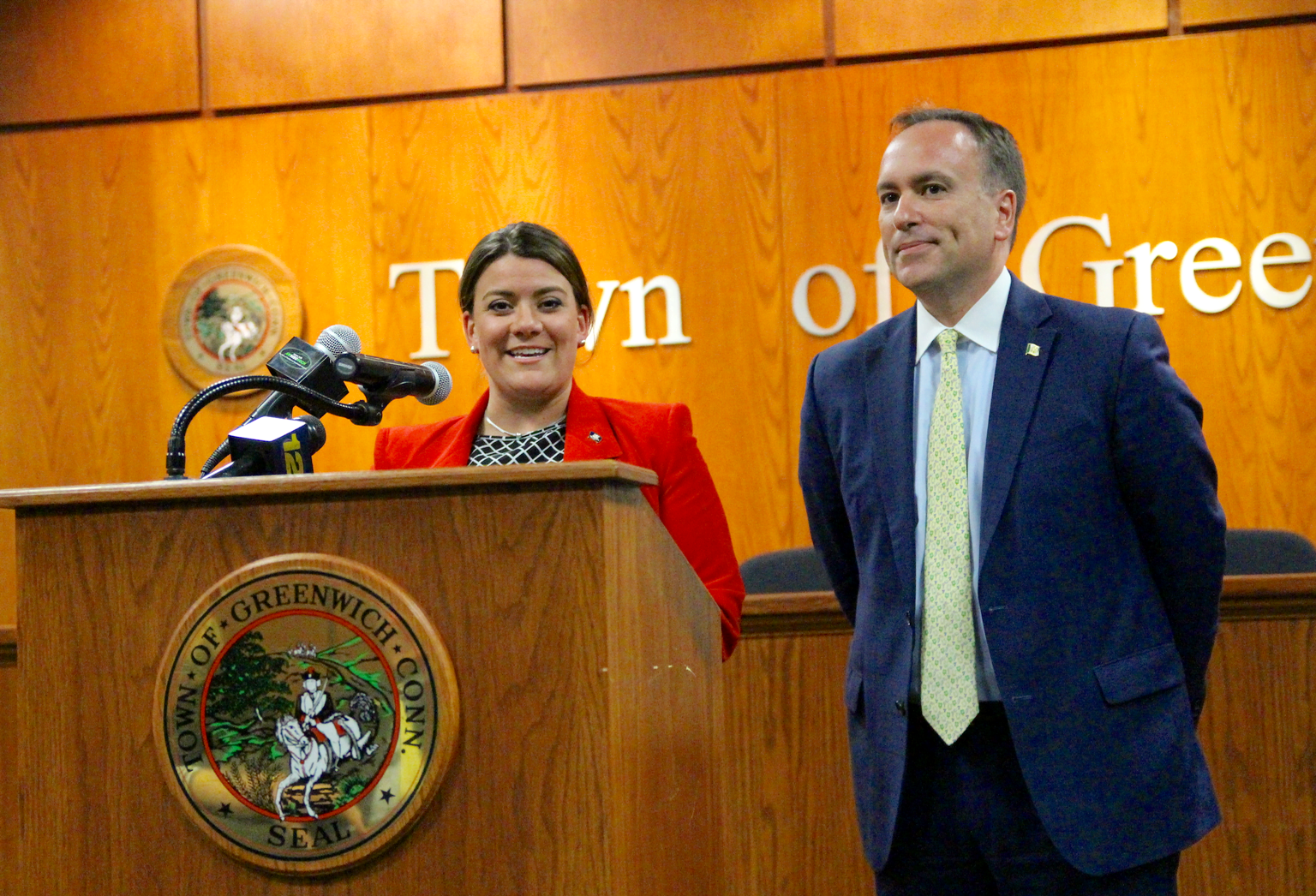 Earlier in the day the pair had made their announcement official in Hartford. At 3:00pm, they took questions from local media in Greenwich.

Stewart, the three-term mayor of New Britain, is a latecomer to the race for Governor herself, having started her exploratory committee on January 29.

“On March 19 I decided we would go all in, as support had been growing and growing and we have been raising money hand over fist,” she said.

“I entered the race a little bit late, and to those who have been critical of that, we have continued to exceed expectations. This partnership is icing on top of the cake,” she said.

Stewart described picking Mr. Tesei, who last November won an unprecedented 6th term as First Selectman, to be her running mate as “an absolute no brainer.”

Stewart said she expected they will secure the necessary percentage for a place on the August primary ballot.

“We’re a team that complements each other well,” she said.

Tesei, who had been backing Steve Obsitnik of Westport for Governor until he was tapped by Ms Stewart to join her ticket, described himself and Ms Stewart are moderates, both ‘very fiscally prudent.”

He said that as a pair they have energy, experience and electability.

Tesei said that having been elected three times in an overwhelmingly Democratically registered city, Ms. Stewart appeals to a cross-section of people. “After all, people vote for individuals,” he said.

Tesei said the populations of New Britain and Greenwich total over 130,000, and that combined they represent the full population of the state.

“I think this presents geographic, gender and generational balance,” he said of his pairing with Ms Stewart.

Referring to their age difference – Stewart is 30 and Tesei, 49, joined the RTM in 1987 before Stewart was even born – said, “For the first time in my tenure of service, I’m the old man in the room.”

Tesei said he and Stewart both consider themselves moderates.  “If you put a label on it, that’s where most of the residents of Connecticut are,” he said. “We share a common philosophy as Republicans. We are very proud as Republicans.”

An area where the running mates have been dissimilar is that Ms. Stewart has distanced herself from President Trump and been outspoken about not supporting him, and Tesei has not.

Asked about their views on the President’s agenda, Tesei said, “We have a President like we’ve never had before, in terms of his style and approach. He is emblematic of the changing society. He evolved as a candidate through social media and a different set of standards than anyone was ever were accustom to.”

Tesei went on to say there are parts of the President’s policies that he agrees with. “Specifically, in terms of budget,” he said, adding that would also be the case with himself and Ms. Stewart.

“I’ve been pretty outspoken about my feelings,” Stewart said about her views on the President’s agenda. “But I also had the honor of going to the Oval Office to meet with him too, so that was a humbling experience. And when I met with President Obama, they gave me hell for that too.”

As for their electability, Ms. Stewart said she takes nothing for granted in Connecticut where just 21 percent of voters are Republicans.

“I don’t think that this November is a guaranteed election for Republicans. Many of our opponents are treating it as such, thinking  just because Dan Malloy is the way he is, that a Republican is definitely going to hold that seat,” she warned. “Not with the tide we are seeing with more Democrats being elected to local offices all over the state.”

Asked about his interest in seeking office outside Greenwich for the first time, Tesei said he thought the appeal of Ms. Stewart and himself would be broad and inclusive enough to appeal to a wide spectrum of voters.

“She is very comfortable and very confident in who she is. That is not easy today,” Tesei said of Ms. Stewart. “That was very appealing to me.”

Stewart said her two women role models were Congresswoman Nancy Johnson and Governor Jodi Rell. “It’s very rare to have two female Repubican role models and I was very fortunate to have both of them.”

Asked how she came to pick Tesei as her running mate, Ms. Stewart said during attempts to solicit support from him for her candidacy over the past two months, she realized they had much in common. 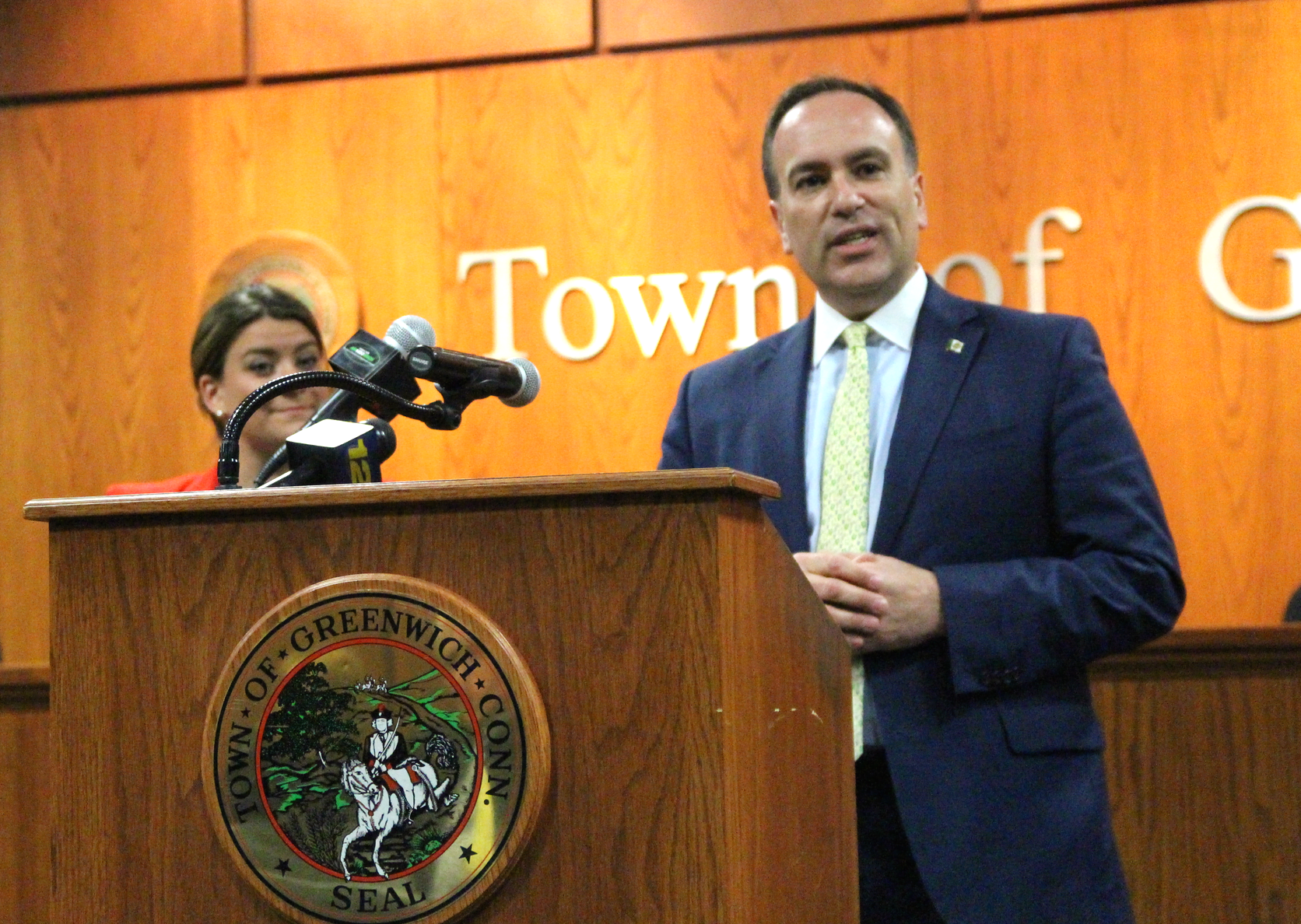