Last week, beginning on Monday night at a public hearing, residents had a chance to react to the proposed elimination of Director of the Conservation Commission and hiring of a new person to lead both that Commission and the Inland Wetlands and Watercourses Agency.

During the budget process, the First Selectman Peter Tesei has said that in seeking to create efficiencies the position of Director of Environmental Affairs position would oversee both Wetlands and Conservation.

The impetus for opportunity comes as Denise Savageau is set to retire on March 1 as director of the Conservation Department. She has served since 1997. 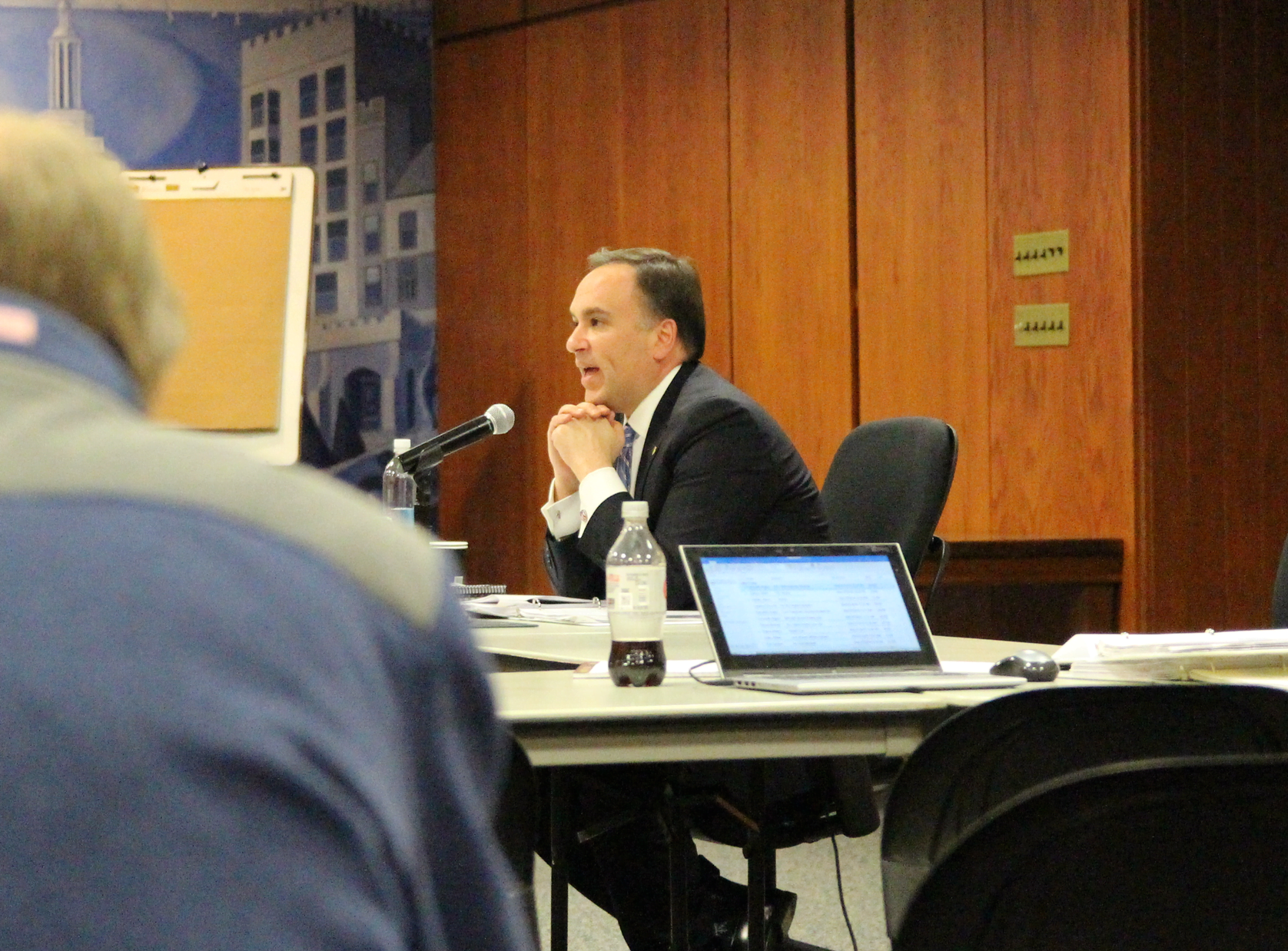 Chair of the Conservation Commission Bill Rutherford wrote in an email to the BET that it was the consensus of the commission not only does their department need additional staffing, but that the Conservation Director’s position remain intact.

Rutherford said that reorganizing of departments “needs to be done out in the open,” and that “consolidation of department head positions be done through a deliberative process that is not limited the First Selectman’s office.”

“We also believe that any reorganization should not be rushed to conclusion because of the budget deadlines or that the goal should solely be to eliminate head count,” Rutherford wrote.

Rutherford went on to say that although it appears that  Conservation staffing will remain the same, overall number of hours allocated to Conservation is reduced.

“This is unacceptable at a time when our program is expanding particularly relating to water supply protection/conservation, energy programs and the new Sustainable CT program,” Rutherford wrote.

Rutherford said that there was a previous proposal to consolidate both departments but but the recommendation didn’t include eliminating either department head.

Last Thursday night Tesei addressed the Conservation Commission, who have been asking for additional staff for several years.

On Friday morning on WGCH Tesei, who as First Selectman appoints the members of the Conservation Commission, debriefed on the previous night’s meeting.

He said with the change, administrative and clerical staff will serve both agencies, and that his proposed budget includes funds to make a part-time conservation manager full-time.

Tesei also said money has been budgeted for external services.

For example, he said the town outsources geese management through a vendor.  “There are other elements of the program that can be achieved that way,” he said.

He said the change should be made and then evaluated. Then, if additional resources are needed, “then make the case in the next budget.”

“But, if you’re unwilling to make any change, the status quo will prevail and that doesn’t necessarily achieve the objective I’m looking for, which is to have more singular oversight and consolidation of our environmental issues,” Tesei said on Friday.

Tesei said IWWA director Patricia Sesto is interested in the job which would mean leading both departments.

“There may be discussions on whether the job should be posted or if there is an elevation of the person who is there,” he said adding that he thinks Ms Sesto has the credential to do the job.

“She did a similar job in Wilton. Some people pointed out that Wilton doesn’t have Long Island Sound. That’s a narrow focus. She’s an environmentalist,” he said.

“That’s were you get the impediments where people don’t want to do anything because it’s too difficult. …. I’m going to be very adamant about not giving up,” he said.

Tesei said at the end of the day, the decision is in the hands of the BET. 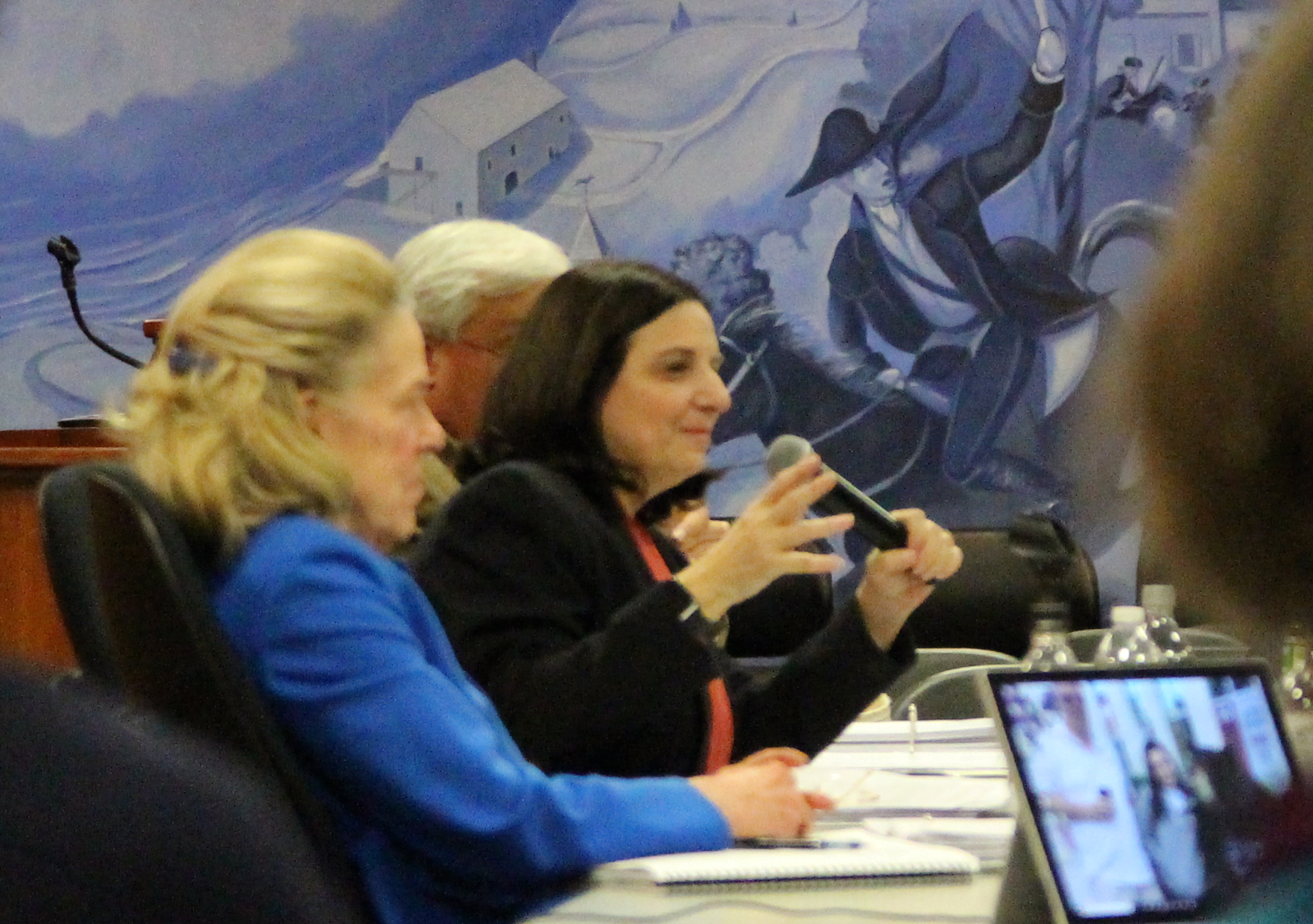 On Wednesday, Feb 7, the BET Budget Committee had a meeting with Peter Tesei during which he defended his proposal.

Bech Krumeich addressed Tesei. “I look at the con side of it and see the work done to date – a lot of grant writing, and I’m just curious does the person you have vying for this have that kind of background or connections to focus as diligently to bring in millions of dollars to the town,” she asked.

“That may sound like a big number,” Tesei said. “We have to put it in context because as we’re learned, the media, they only pick on a salient point without discerning what the facts are.”

“We have two directors. One is retiring. One desires to continue a career in the municipal workforce in an environmental capacity,” Tesei said. “…I believe Patricia Sesto does have the ability and vision to undertake the overall role of Director of Environmental Affairs and employ the resource granted to her under this shared organization to make those grant applications.”

Tesei said the human resources department has begun looking at the new job description, taking into account that there are two jobs and functions to be combined.

“Advocacy is part of our democracy, but it is evident to me that there is a very a organized environmental community who are being presented this by one side only,” Tesei said. “It’s only one side who are taking a very protective posture.”

BET member David Weisbrod said, “It seems to me the crux of the issue is the need for, and presence of a champion in the town of Greenwich to pursue certain activities that are not the normal remit of the Wetlands Agency – notably energy efficient buildings, environmentally friendly parks, drinking water protection, watershed management, wildlife management, sustainability, energy planning and emergency response.”

“Those are part of the job description,” he continued.”If we were to eliminate having a champion for these extremely important activities, it is something needs to be debated.”

“I don’t think there would be any diminution,” Tesei said. ” here should be the ability to prioritize. And of course we have another full time staff person to support the under taking of those programs.”

At the end of the meeting, Leslie Moriarty, the BET Budget Committee chair, allowed the conservation commission members, including Susie Baker and vice chair Eric Brower to present their position.

“We’re in line with supporting efficiencies,” Brower said. But, he added, “… over time the amount of required activities of the conservation commission and its staff is growing. In terms of water issues, and other concerns related to the waterfront community… We see these initiatives are taking more time of our staff.”

He said the commission support making the part time staff position in conservation into a full time position. But, that, “We’re fearful that there is still a need for more staff.”

Leslie Moriarty said when Greenwich signed on to the Sustainable CT agreement she hadn’t realized the obligations the town committed to.

“There may be greater focus on it now,” she said. “Those are realistic concerns I think they’re shared by a lot of people. Can we still maintain the level of resources and attention to this? Change is hard. It’s difficult to know what the next scenario looks like. I’m trying to keep even on both side of the proposal.”

Conservation Commission’s Susie Baker said what the town needs is “an Energy Czar.”

“This is the next gig thing for our town to take,” she said. “Because we don’t have an energy plan, fighting things like Eversource has always taken a lot of time. That would really be valuable. Think energy, it’s a huge focus!” 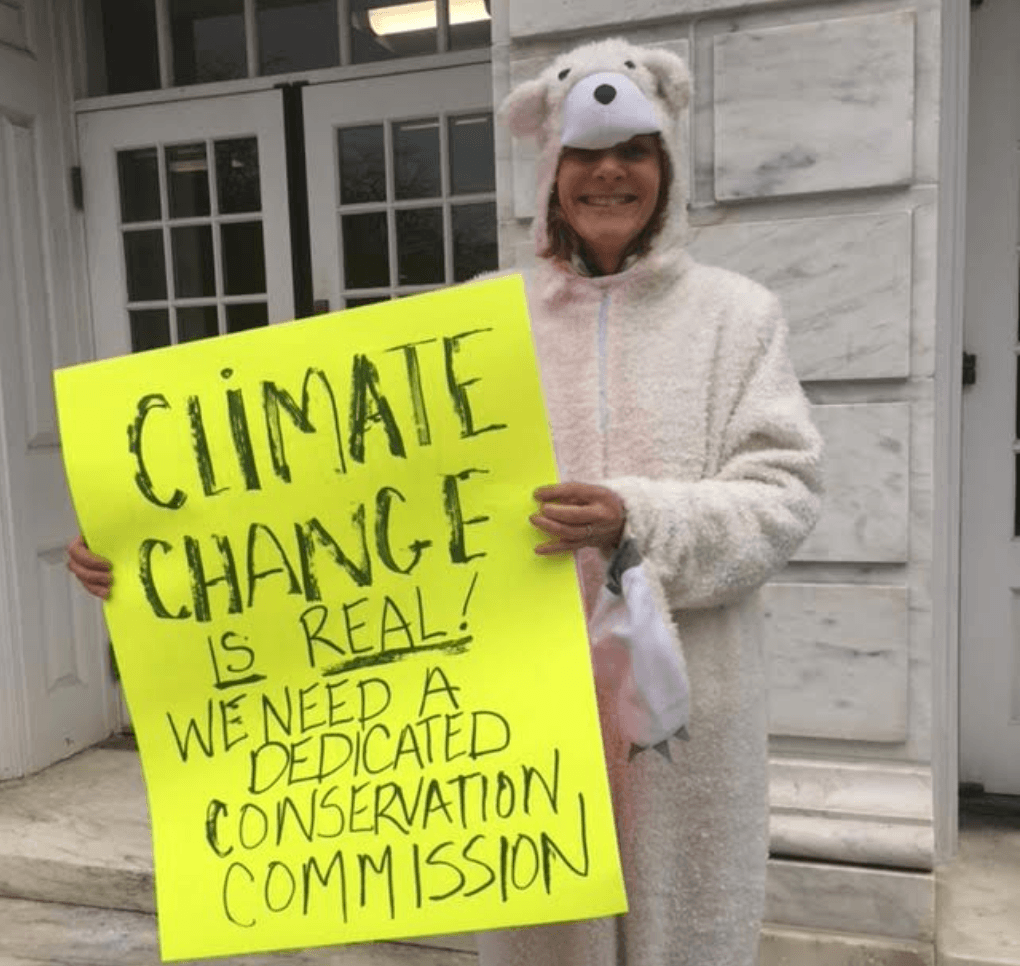 Concerned citizen Heidi Matonis wrote in an email to the BET, and copied to GFP, that she will not accept anything but a dedicated Conservation Commission to lead the town into uncertain times.

She said First Selectman Tesei’s proposed Director of Environmental Affairs is not the same as a Director of Conservation.

Matonis suggested making up budget shortfalls by eliminating the town’s leaf pickup, which she said serves roughly half the residents and costs the Town $500,000.

“Instead, residents should be educated to compost on site.  Also the town could look at ‘Pay as you Throw’ programs to encourage town residents to reduce their waste,” she said.

Also, she pointed out, “Currently there are no tipping fees to private trash collectors and therefore, private haulers are not motivated to reduce solid waste:  The more waste we create, the more they profit. This is not sustainable.”