BYOGreenwich is hosting a Reusable Bag Drive from 10:00am to 2:00pm on Thursday, February 8, in the lobby at Greenwich Town Hall.

The BYOGreenwich, short for bring-your-own, is the mantra of the movement to phase out single use plastic bags.

People are encouraged to drop off any spare reusable bags, or pick one up if needed.

Back in September members of BYOGreenwich participated in the Last Taste of Summer, a zero waste event.

“Plastic bags are neither compostable nor biodegradable,” said Anne Ogilvy at the event. “The plastic winds up in the trees and in the water.”

Ovilvy said Greenwich is uniquely poised to make a difference because residents embrace their roles as stewards of Long Island Sound.

One point of resistance from those who have voiced skepticism about the plastic bag ban is how it might impact those who can’t afford the possible 25¢ fee retailers would charge if shoppers don’t bring their own reusable bag. Retailers would keep the 25¢ fee.

Members of BYOGreenwich have pointed out that many residents have extra reusable bags, and that local companies are eager to support the effort by giving away reusable bags.

Since this summer, when BYOGreenwich presented their idea to the Board of Selectmen, the group has seen a groundswell of support. A story on their proposal garnered 465 Facebook likes.

The “Bag It” trailer makes the point that just because plastic is disposable doesn’t mean it goes away. Plastic bags fly, float and drift. Plastic bags never break down. Plastic bags collect concentrated toxins that enter the food chain. Plastic is bad for the environment, bad for wildlife, and bad for people’s health. Plastic bags impede and clog waterways. Plastic bags entangle and kill wildlife and marine life.

Currently only 5% of single use plastic bags are property recycled.

An estimated 950 million bags are handed out to Connecticut shoppers every year.

The average single use of a plastic bag is about 12 minutes.

The group suggested that consumers think plastic bags are “free,” but their costs are embedded into the cost of groceries or absorbed by business owners.

The “Bring Your Own Bag” initiative notes that the idea of reducing plastic bag pollution is gaining momentum, and Greenwich has an opportunity to become a leader.

The proposed ordinance is modeled after that of Westport, which went in place in 2009. 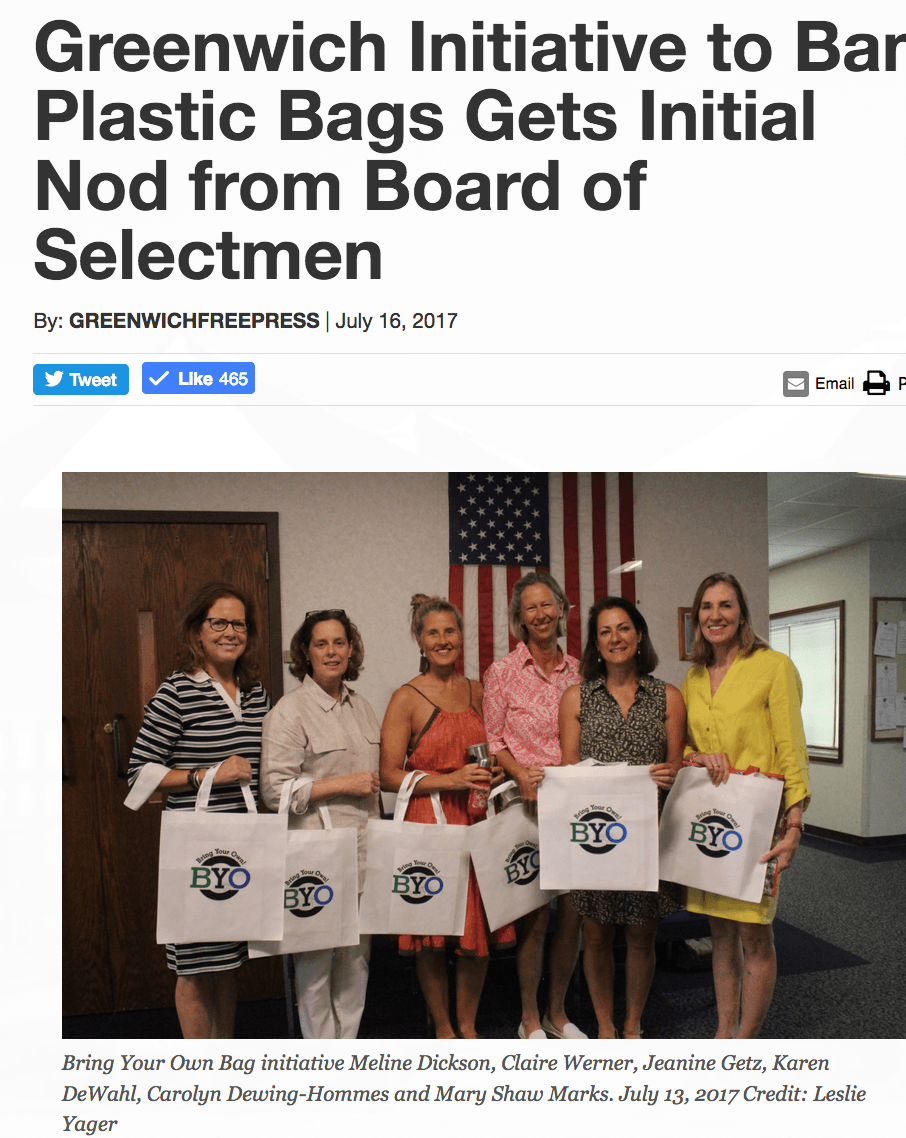 PHOTOS: Last Taste of Summer, Delicious on What Felt Like First Day of Fall