On Thursday night First Selectman Fred Camillo held a meeting on proposed capital budget for the next fiscal year at Town Hall. He said he proposed general fund capital improvements totaling $74.5 million, which is $11.3 million less than projected last year, and had been projected at $85.8 million. Of the $74.5 million, the Board of Education request is $32.2 million.

“I’m already reaching out to potential donors to get that down significantly,” Camillo said of the civic center project, referring to the public-private partnerships that were central to his campaign platform last fall.

Also, Hamill Rink has $1 million in the budget for design and construction plans, and that project has a $16 million price tag for construction in fiscal year 2023.

“Again, that $16 million will be significantly less. We’ve already had several people in my office for donations,” he said.

The Board Education has included $2.6 million for ed specs for possible renovation of Julian Curtiss School.

“If you were at the meeting the other night, you know the GAF came forward and said they’d pledge $1 million,” Camillo said.

With a nod to the familiar residents who favor natural grass, Camillo said the BOE is considering two plans for Central Middle School fields: a $3 million plan for synthetic turf, and $1.1 million for natural grass.

Camillo said he had received many emails on the issue.

“Having played on that field since the 1970s, my personal opinion is – after speaking with both natural grass and turf advocates  – I’d like to offer a compromise for turf on all fields, except for the middle schools, the reason being – as the natural grass advocates say – the kids don’t have a choice,” Camillo said. “They have to be there….I would prefer to have natural grass on those fields.”

Camillo noted that, per industry experts, an engineered grass field with proper drainage can accommodate 25-30 hours of playing time a week.

“That goes pretty quickly during the week, and that would preclude use on weeknights and weekends,” he said. “Maybe we should throw some tarps in there. That’s what major leagues and colleges do.”

“There’s the concern from the turf people that the kids don’t have the opportunity to compete with kids from other towns who do have these fields,” he added.

Camillo said that the budget includes $2.5 million for a GEMS facility. GEMS is located on King Street, adjacent to the Town’s Griff Golf Course.

“We own the land and the thought is that GEMS performs a great service to our town, but the vehicles are parked outside, and if they don’t start that could be life or death.”

Camillo said he would oversee a Town Properties Commission who would look at Town properties being underused or misused.

There is $1 million proposed for park restoration and work facility relocation at Roger Sherman Baldwin Park.

“To be fair, there’s no great place to park trucks, but they don’t belong on the waterfront,” Camillo said referring to the large brick building between the Arch Street Teen Center and the Ferry building where DPW stores trucks and equipment. “They’ve been there for generations. It’s nobody’s fault. But it’s going to end and we’ll get started right away. It’s really going to enhance the waterfront and is the beginning of a grander vision for our downtown.”

During the hour long public hearing, resident after resident spoke out in opposition to artificial turf at Central Middle School. Speakers included scientists. 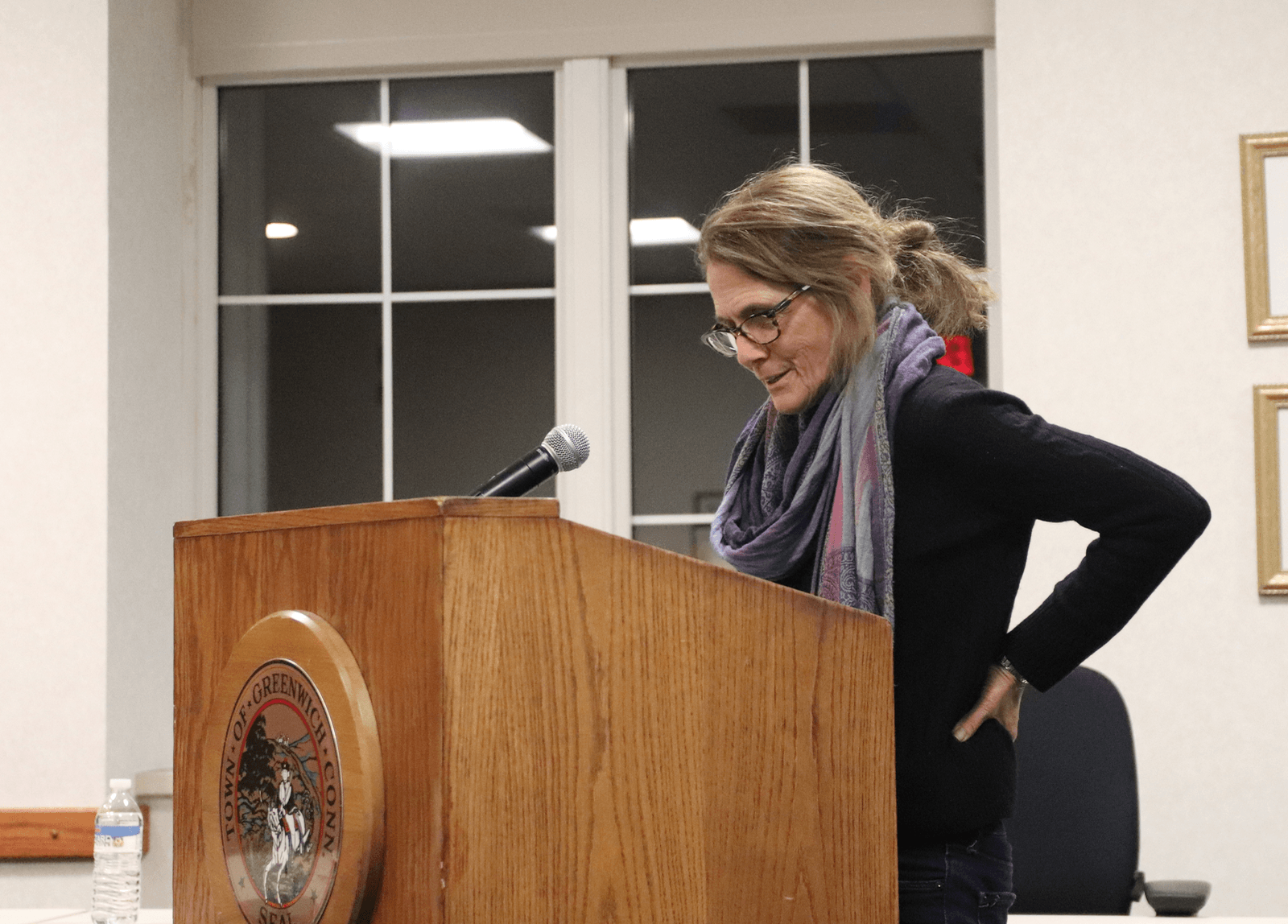 Patty Roberts, a longtime resident of Riverside with three children who went through Greenwich Schools said her daughter had played soccer. “Quality teams are important to me. I just don’t think the answer is more artificial turf,” she said.

“Currently artificial turf is not regulated,” she added. “There is no Good Housekeeping Seal of Approval that lets us know as parents that we’re letting our kids play on a safe surface.”

She referenced articles on heat generated from turf fields. “Columbia University did a study and found that on turf fields in New York City, when it 86° in the shade, it was 160° in the center of the field,” she said, adding that the Centers for Disease Control and Prevention recommends posting warnings to the public of potential exposure to playing on artificial turf. “They urge that clothes should be taken off immediately and turned inside out. They discourage eating or drinking on the fields, and immediately after play washing hands and body aggressively for at least 20 seconds.”

Susan Foster, a resident of Riverside said she too opposed the funding request for possible installation of artificial turf at CMS.

“I think Greenwich may be a cancer hot spot,” Foster said. “I believe it may be our proximity to I95 that may be the culprit, and it would be prudent to not expose our children to additional toxins, especially as they are entering puberty.”

She said both CMS and EMS were situated in residential neighborhoods.

“I believe when these schools were originally sited there was an understanding that these schools would be good neighbors,” she said. “Our neighborhoods cannot withstand any additional booking of field usage without seriously affecting home values and the quiet enjoyment of our properties.”

Foster said PE class is not optional course in public school, but after school, competitive sports are.

“When plastic fields get hot they off-gas, and like all petroleum products they break down,” she said. “It’s one thing for a 12-year old to play a 90 minute soccer game on a plastic field and go home to a cleaner environment. But, for the abutter there will be no escape.”

Susan Rudolph talked about artificial turf. “Over the past years I’ve studied the topic of grass versus artificial turf. My colleagues and I have been labelled as cranks, complainers and would-be physicians,” she said, going on to introduce experts.

One of the experts was Patricia Taylor, deputy outreach director for Environment & Human Health Inc, a non profit composed of physicians and public health professionals. Taylor led the report, “Synthetic Turf: Industry Claims  Versus the Science.”

Ms. Taylor noted Milone & MacBroom had been hired to advise Greenwich on new fields for CMS and presented the town with three options, including natural grass, which she supported.

Her group’s position is that there is no safer surface for students and athletes to play upon than grass.

“Synthetic turf fields are composed of acres of plastic grass backed by latex and rubber pads glued together with polyurethane adhesive, and then filled with thousands of pounds of waste tire crumb rubber or alternative infills. As such, artificial fields are not truly in keeping with a sustainable Greenwich,” she said.

“This insanity needs to stop,” he said. “There is perfectly good soil at CMS with no carcinogens, and if the BOE wants to rip up the grass and replace it with poisonous chemicals, why is it so hard to protect our children?” 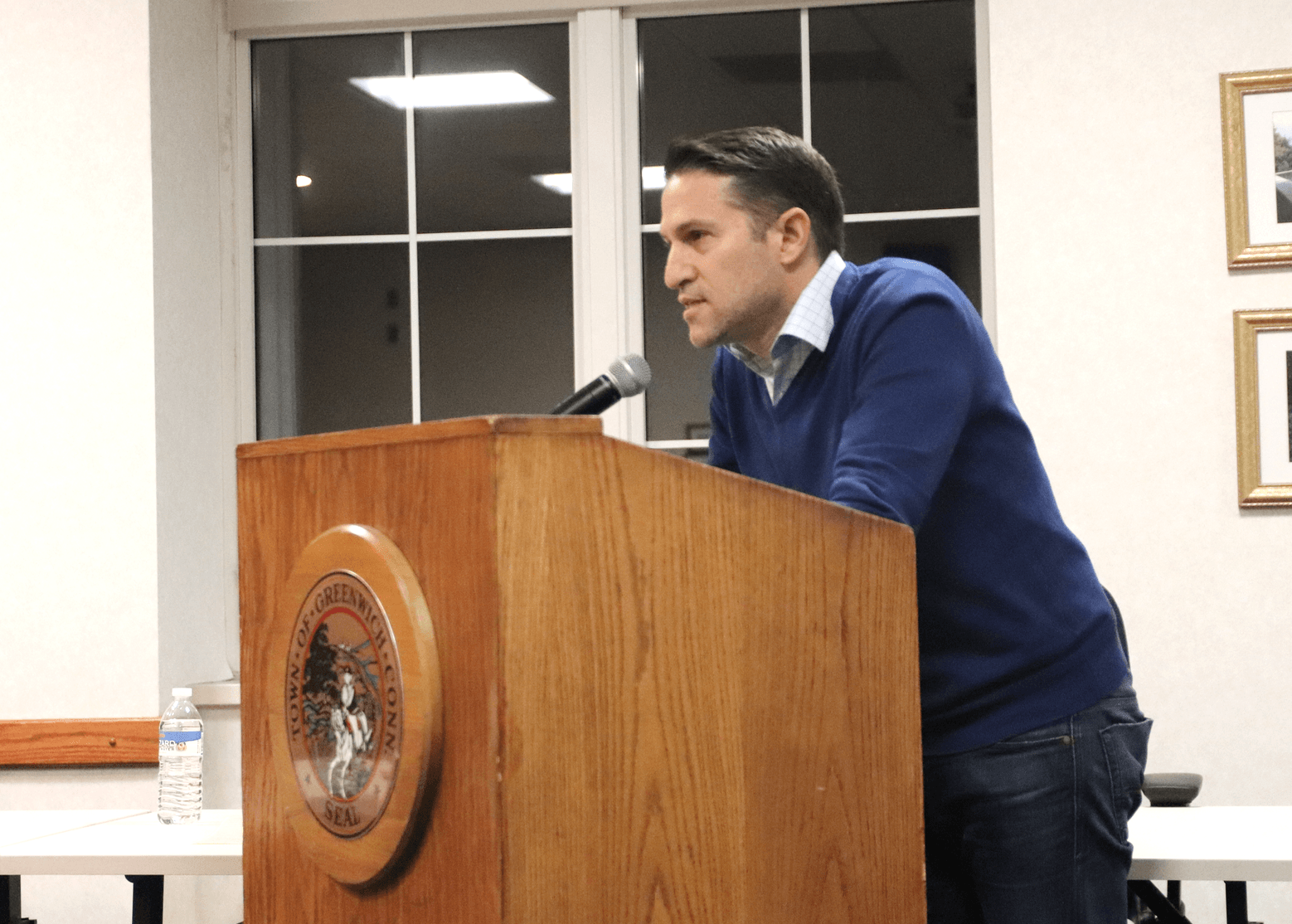 Mr. Silver suggested the Board of Education had ignored the EPA, CDC, OSHA warnings about playing or working on artificial turf. “Why does the BOE think they are qualified to do a health risk assessment regarding artificial turf?”

“The BOE hired Milone & MacBroom, a company that specializes in artificial turf fields, to lead a feasibility study to determine whether real grass should replace artificial turf,” Silver said. “Why are towns all across the country passing moratoriums against new turf installations?”

Anne Merrill who graduated from GHS in 2014 and then graduated from Princeton before moving on to University of Oxford where she writes about environmental issues, said she also opposed artificial turf. 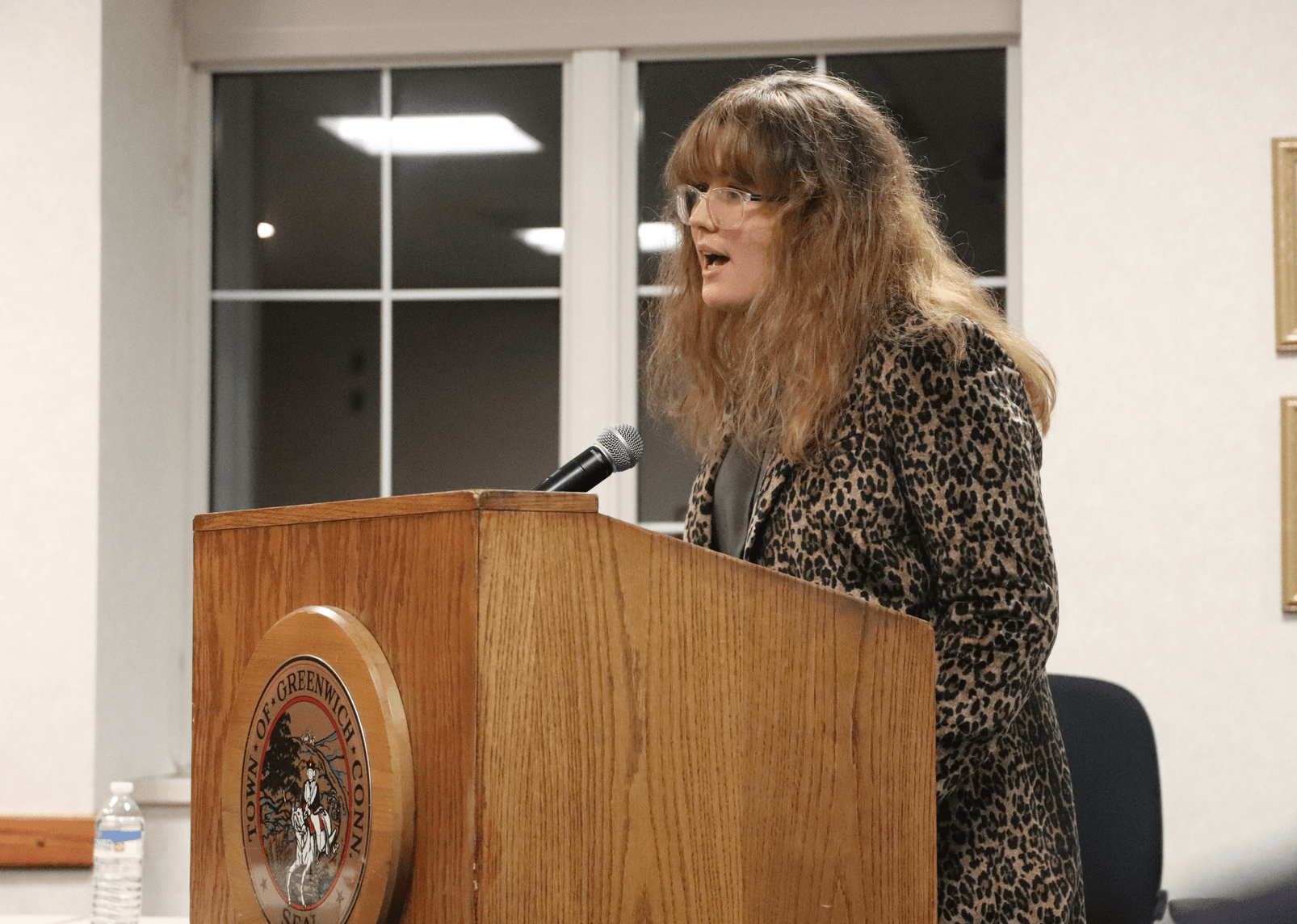 “I defer to the scientists. The science can’t be denied. It’s definitive,” she said. “The experts have told us how bad it is for human health and environmental impact. Artificial turf in any capacity, especially in middle schools, is unethical and legally questionable. Speaking from my generation and the younger generation, it is not the way to go.”

“All you need is a company to provide expertise for the capable ground crews in some of the more specific biological methods,” Corculack said. “I don’t know how many guys you get on the squad who go out there with a microscope or bringing stuff back to look at under a microscope. But you get the right materials and foods for the microbes. That’s how you get grass, if you want to do it. If you have any problems with grass, look at drainage. We need drainage assessments.” 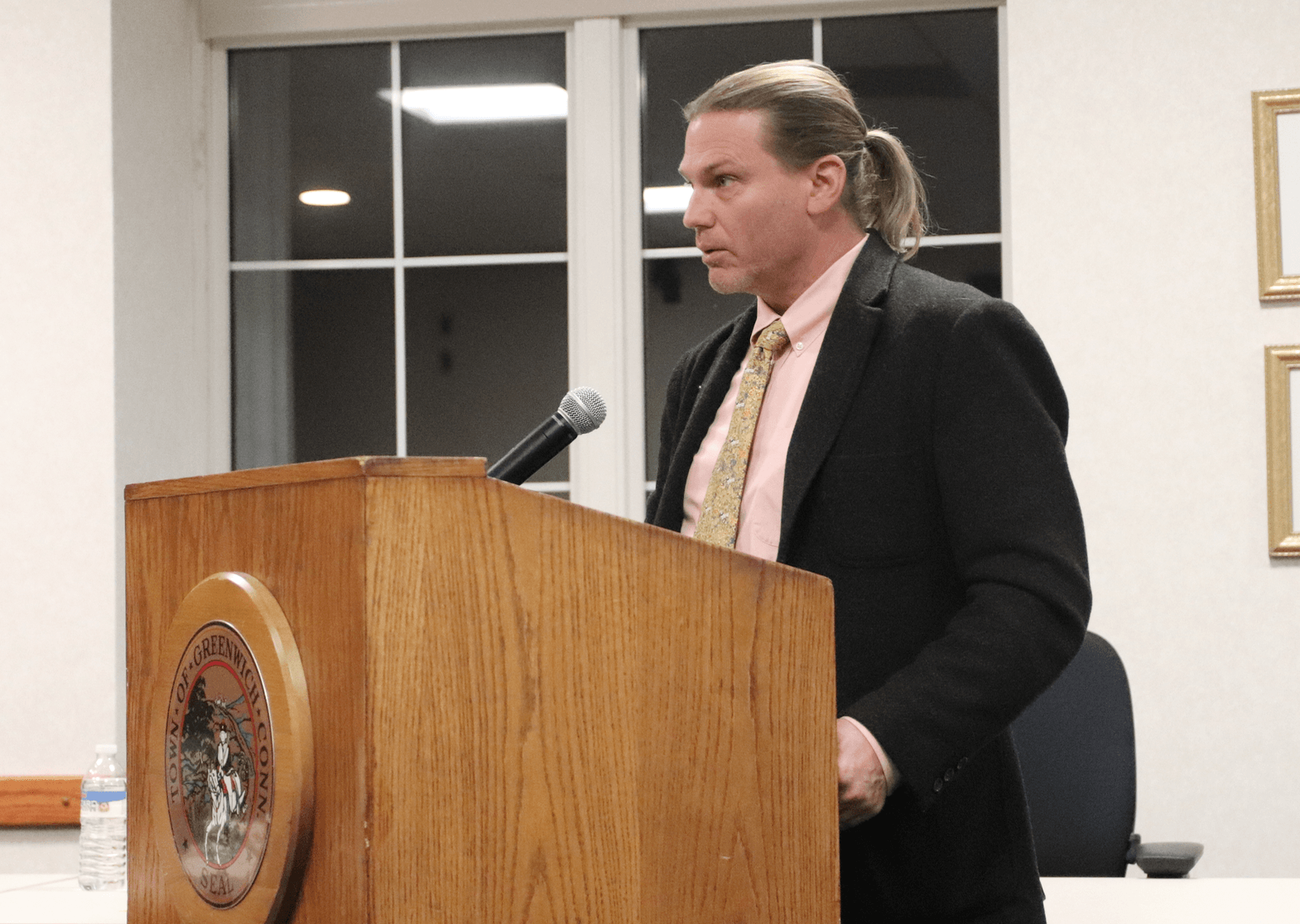 While only one resident spoke in favor of artificial turf, the previous evening at the Parks & Rec board meeting, Parks & Rec Director Joe Siciliano said the BOE had send an email asking the department what was their position.

Parks & Rec Dept maintains all the fields at Greenwich Schools.

“We still support our initial proposition which was artificial surface because it supports all our programming,” he said. “The natural grass option is better than what we have now, but an engineered grass field will give better drainage.”

Siciliano noted that to maintain a premiere game field, consultants recommend not using it more than 25 hours a week.

Siciliano said his department would have to increase maintenance if the BOE goes with an engineered grass field. That would mean and re-sodding more frequently.  “We highly recommend an irrigation system, so during the summer we grow grass,” he added.

“Our position, in the best of all worlds is artificial (turf). If it’s something else, we’ll live with it. But 25-30 hours of play will not satisfy anyone’s program.”