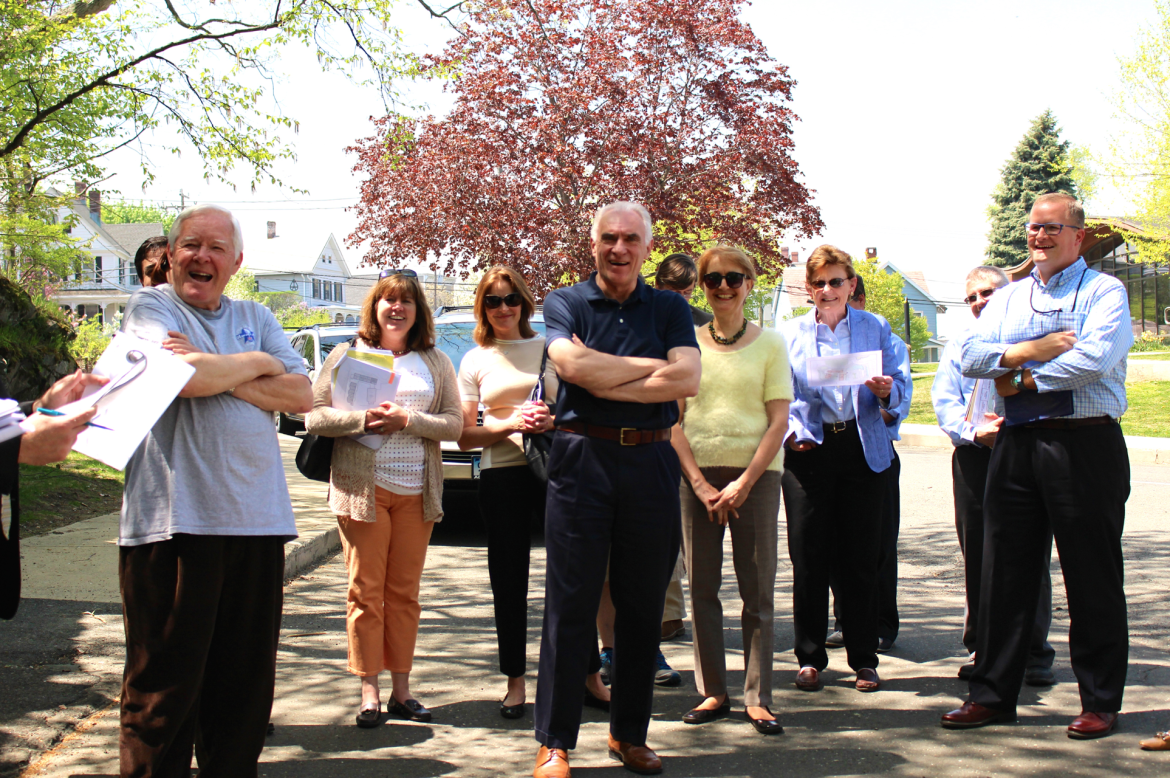 Friday afternoon’s Board of Selectmen meeting-come-field trip was a popular event with maybe two dozen turning out in the hot sun to walk the proposed site behind the existing new Lebanon School. About 20 people, including residents, Board of Ed members, PTA leaders, BET and RTM members and members of the media.

The group walked the perimeter of the proposed building, the longest portion of which parallels the edge of the ball field and then, the bravest, walked into the ravine where poison ivy, and possibly ticks, was abundant. 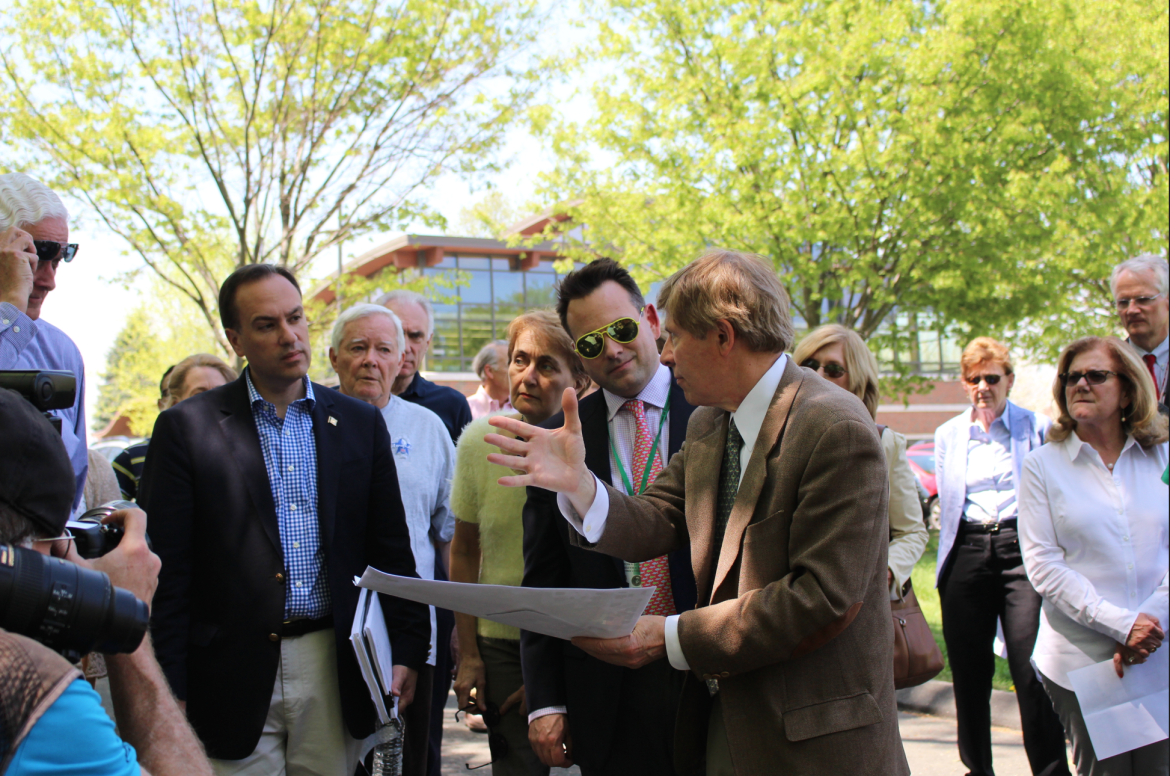 Ultimately the group traipsed through the ravine, which indeed did provide perspective on its relation to the ball field, the Byram Schubert Library, I95 and the current building, which is at the highest grade on the site and will ultimately become a parking lot.

First Selectman peter Tesei explained at the outset that Board of Selectmen had requested the walk through of the site to visualize it as it relates to Scheme C, which had been presented by Board of Ed and its architects with a request for MI status on April 30. At that time the selectmen declined to decide on the MI request, indicating they wanted to first walk the site and receive more details from AECOM’s environmental testing (Some testing had been done and portions of the ball field are fenced off as the result of contamination discovered).

Mr. Tesei offered to host an additional special meeting if the testing is not ready in time. “We don’t want the calendar to drive decisions,” he said. 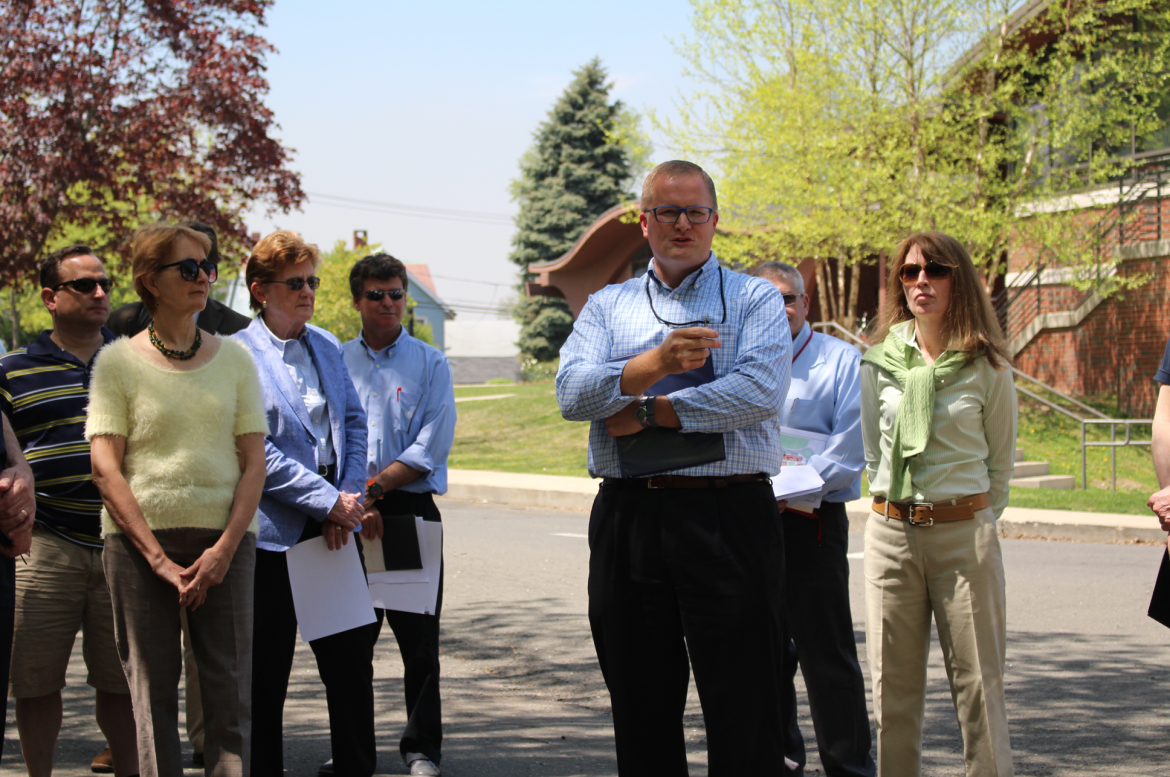 Ben Branyon who is currently head of Operations for the Board of Ed, but will segue to a new job as Town Administrator in coming weeks, said soil tests are at the lab and are on track to being delivered in time for the Board of Selectmen’s May 28 meeting.

Mr. Tribe said the design creates a horseshoe shaped school that opens into the woodlands and wetlands in the ravine, borrows from both “town and country.”

Mr. Tribe said that the renderings of Scheme C are early in the design phase and aren’t precise, but, he said, “What’s fascinating about this location its combination of a civic and important site joining with the library and the village green, and turning around and joining it with the woodlands. Nobody gets that,” he said. “Most are either in the center of town or out away from everybody in the country,” Mr. Tribe said of the proposed location of a new school in the ravine between the existing school and I-95. 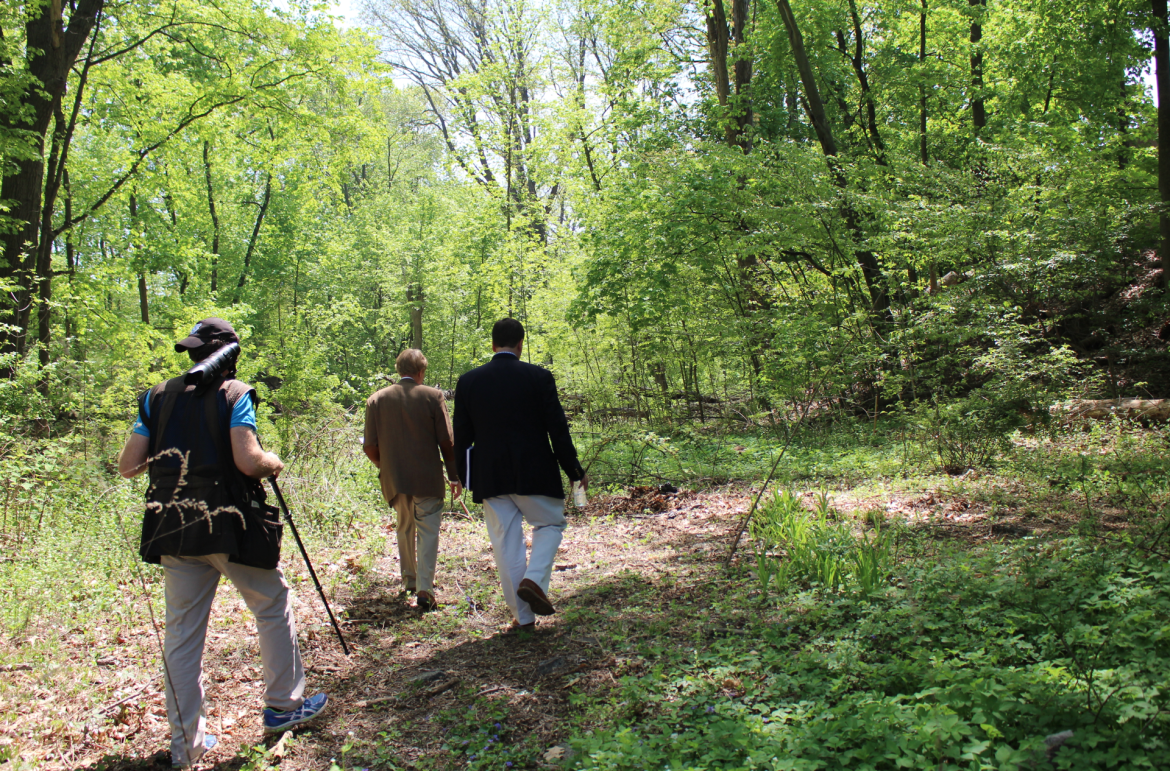 Mr. Tribe said the woodland would be cleared land with wetlands beyond. He explained that the wetlands are the lowest point in the area, and were created “by a variety of interventions over the years.” The vernal pond, are not always wet, but, based on the time of year may be wet. “We exaggerated it because we want to enhance the feature,” he said of the wetland as drawn on the rendering, adding that the wetlands are 400 ft from the building, and 100 ft from the landscaped area.

Bob Clausi, Senior Wetlands Analyst with the Town, requested that the architects stay in touch with his department. “As you develop the plans please let us advise you and guide you to keep the project moving along,” he said.

“We need to keep this moving forward,” said Claire Kilgallen, who is a former New Leb PTA president and current PTA executive board member. “If you saw what they have to do to make things work. Instruction on the stage. Instruction in closets. Instruction in the hallway,” she said. “The music teacher has to move six times a day. It’s like the worst logic game you ever had to take for a graduate program. A Rubik’s cube is easier,” she said of the existing scheduling challenges at New Leb. 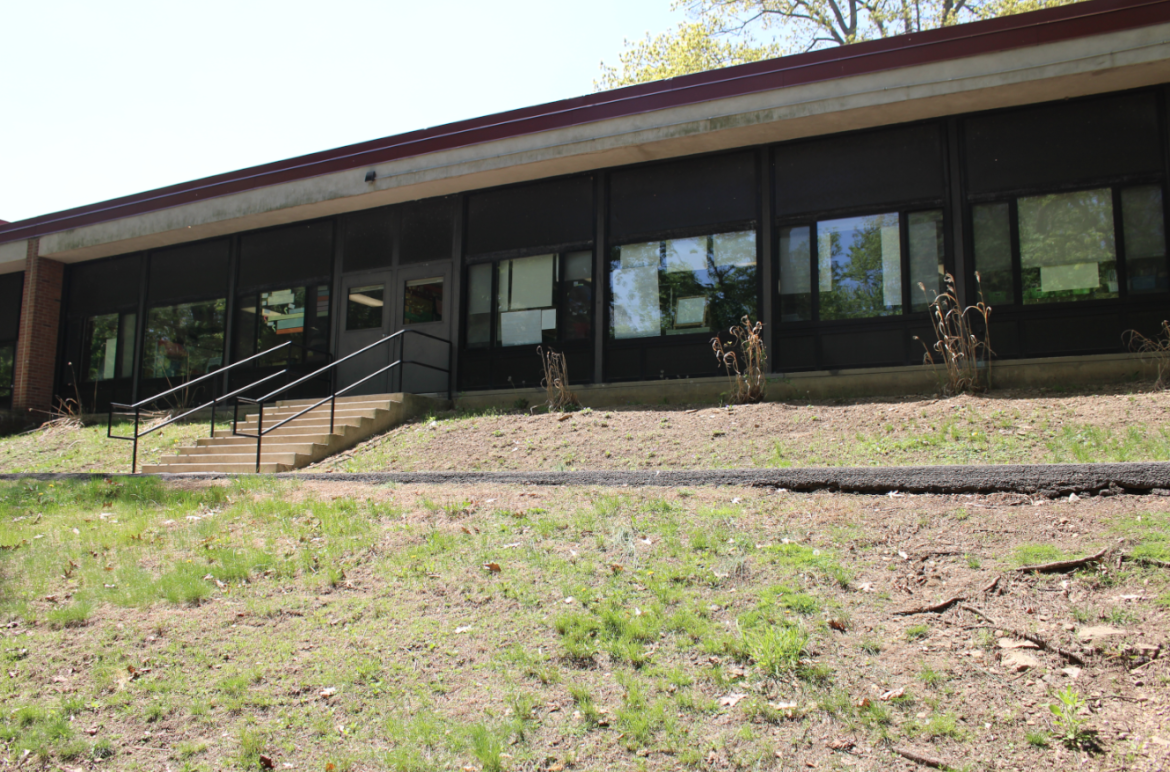 The back of the existing New Lebanon School building, which Superindent McKersie noted has been considerably cleaned up, as it until recently was completely overgrown. The new building would rise from the ravine and its second floor would connect to a parking lot (located on the site of the current building). Credit: Leslie Yager

Also, the common rooms are vastly undersized which impacts the programming. If you have a tiny cafeteria you are running lunches from 10:30 in the morning til 1:00pm, with kindergartners having a morning snack and lunch at 1:00pm.”

The architects said they had created their design using the town GIS, which is based on aerial photography and an old survey. Though an A2 survey is required by the Selectmen in order to grant approval for Municipal Improvement for the project.

“My end goal is to get the right school for the kids, but we’re trying to balance several things: We want our kids together. When they wanted to take our 5th graders and put them over to Western Middle School, didn’t do that. We sucked it up. We did what we had to do to keep our kids together,” she said, though she did acknowledge having the kindergarten classes across the street has been far from ideal.

Back in November when about 200 people turned out for a public hearing on possible schemes for a new school, Kilgallen gave a bit of history of the site. In Dec. 1956, the Teagle family deeded to the Town the land next to the school for school, educational and playground purposes. Of the entire 7.5 acres gifted, New Lebanon school only uses 2.7 acres for the current building, parking and playground. She pointed out that New Lebanon School is the only school in town without a playing field. The students have limited space at recess and no real athletic fields for their PE program.

“The move to the adjacent ravine provides for a larger multi-use field, and an additional second field if we want it, where the playground is,” Kilgallen said. “It’s actually the option with the most parking. It has no chance of displacing students. I’m glad to hear everyone is in support of it.” – Clare Kilgallen 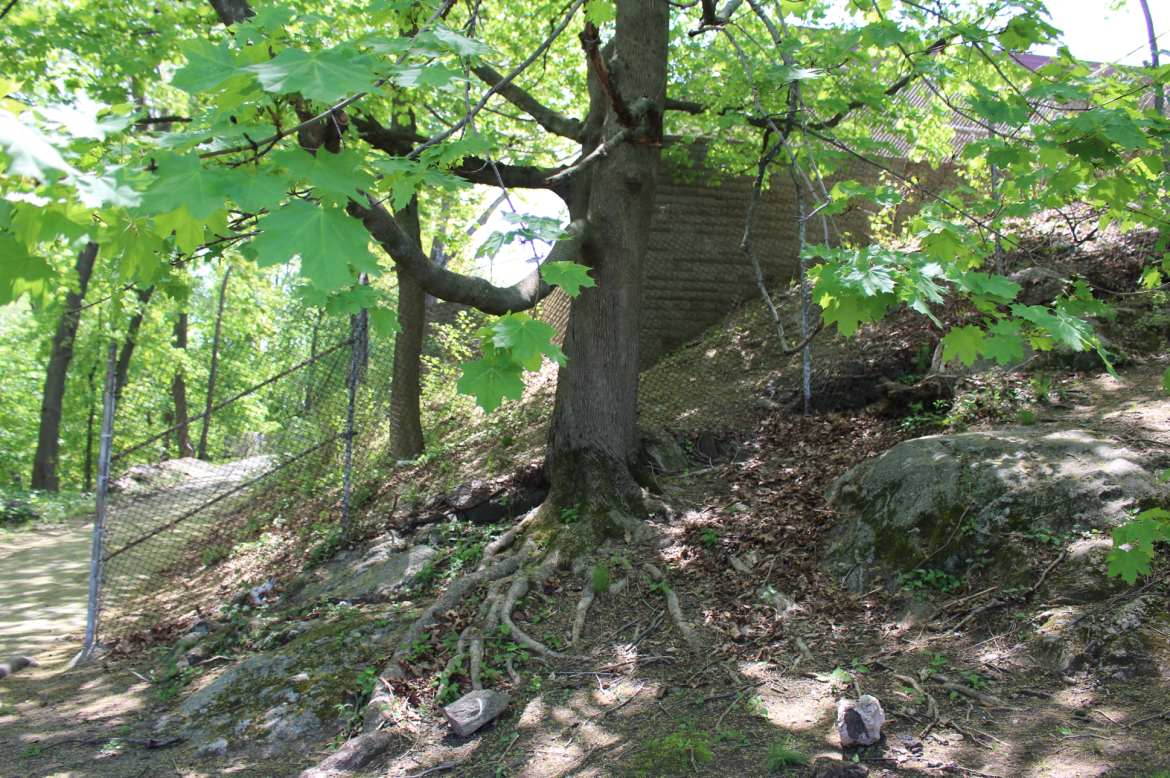 Mr. Tribe pointed out that the proposed building design starts at the edge of the ravine by the Maple tree and chain link fence at the foot of a rock outcropping behind the exiting school. Credit: Leslie Yager 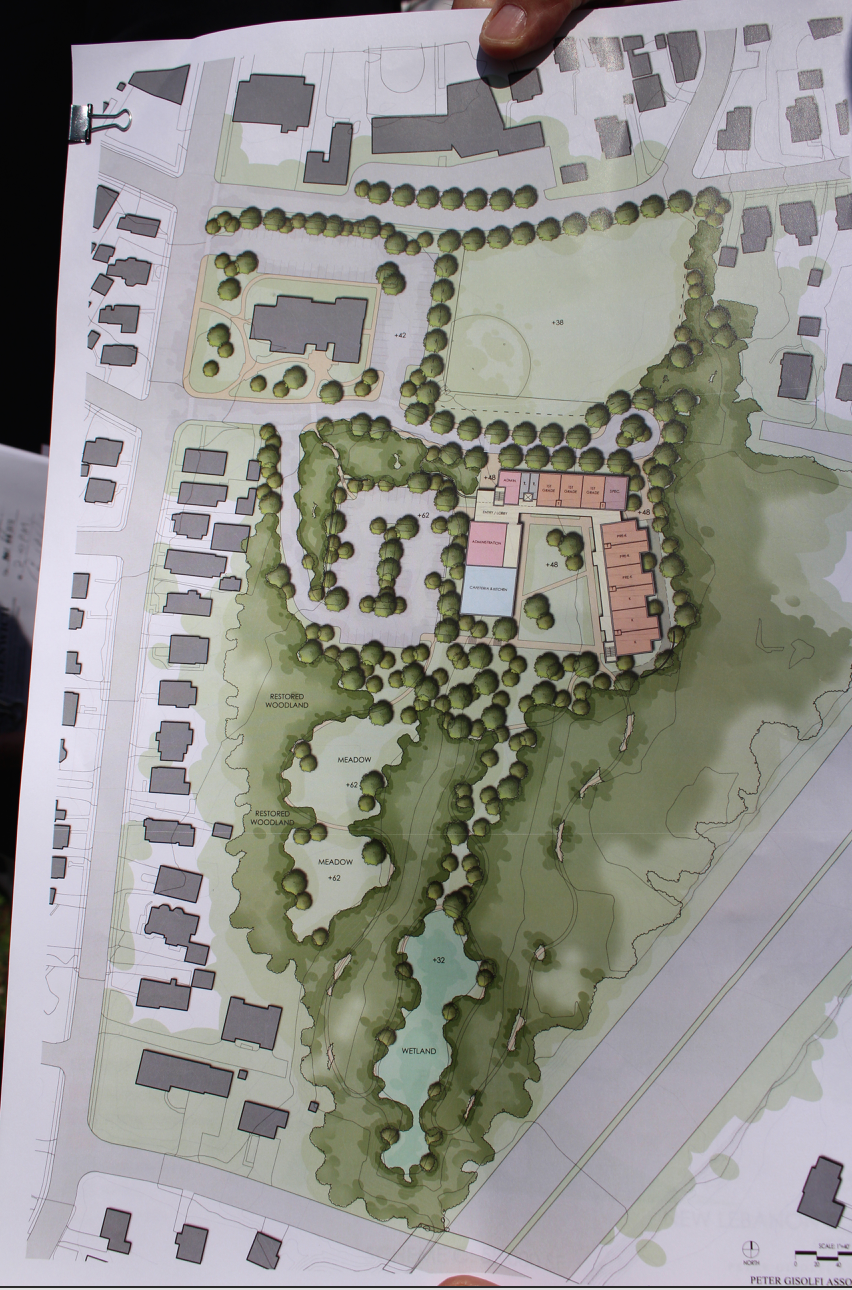 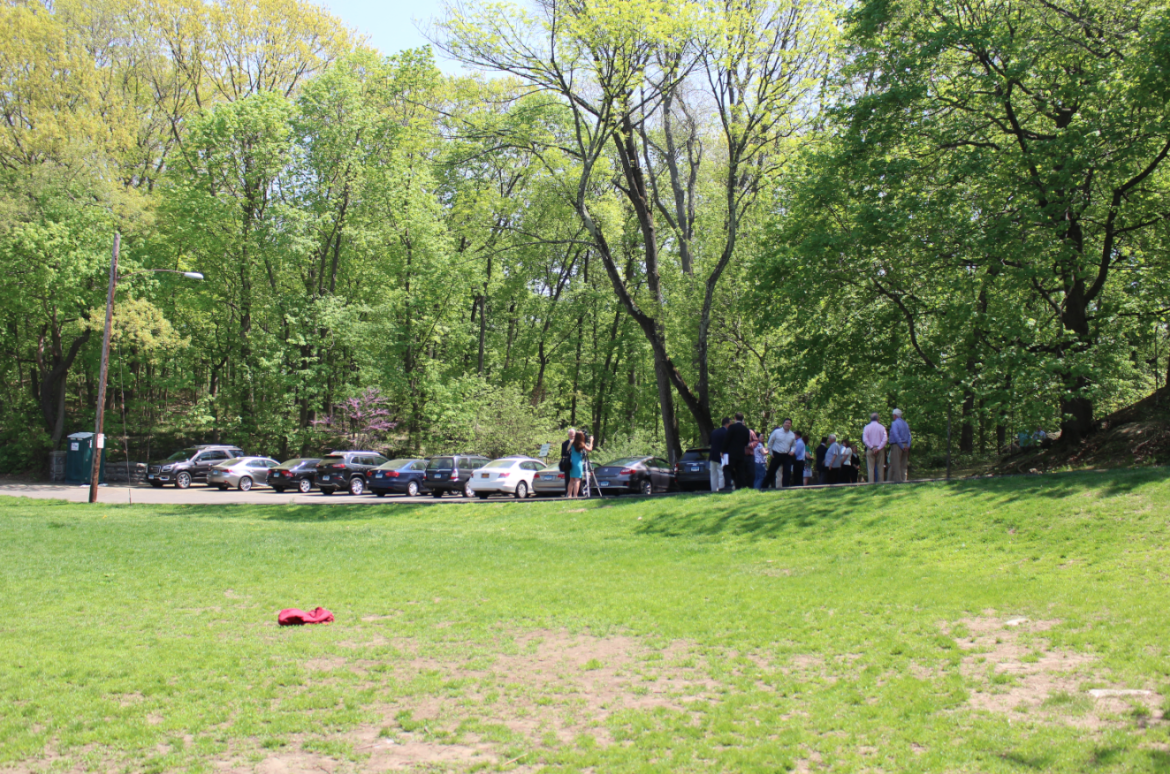 View from the ball field toward the wooded ravine, which was once The Teagle estate, and later donated to town. The original New Lebanon School is where the Byram Schubert Library is. The Teagles donated their property once I95 bisected it. Credit Leslie Yager 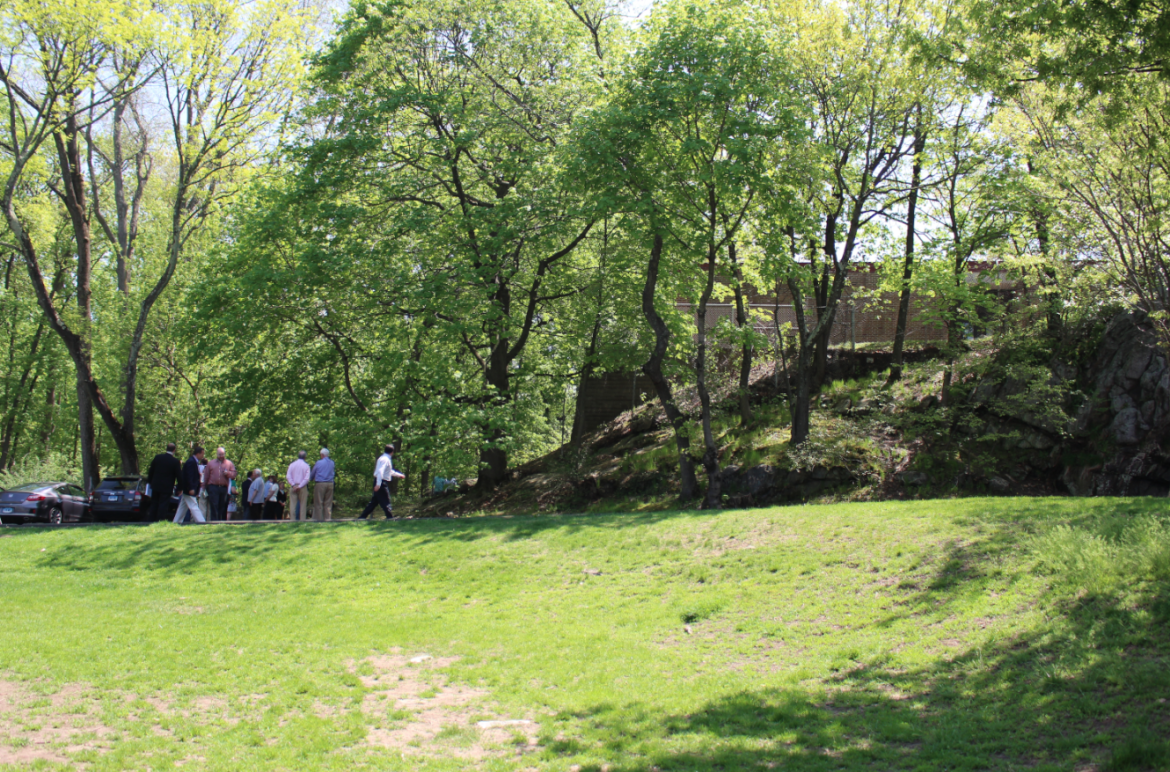 Proposed Scheme C would mean the building would come to the foot of the rock outcropping (by where the group of people are standing). Credit: Leslie Yager 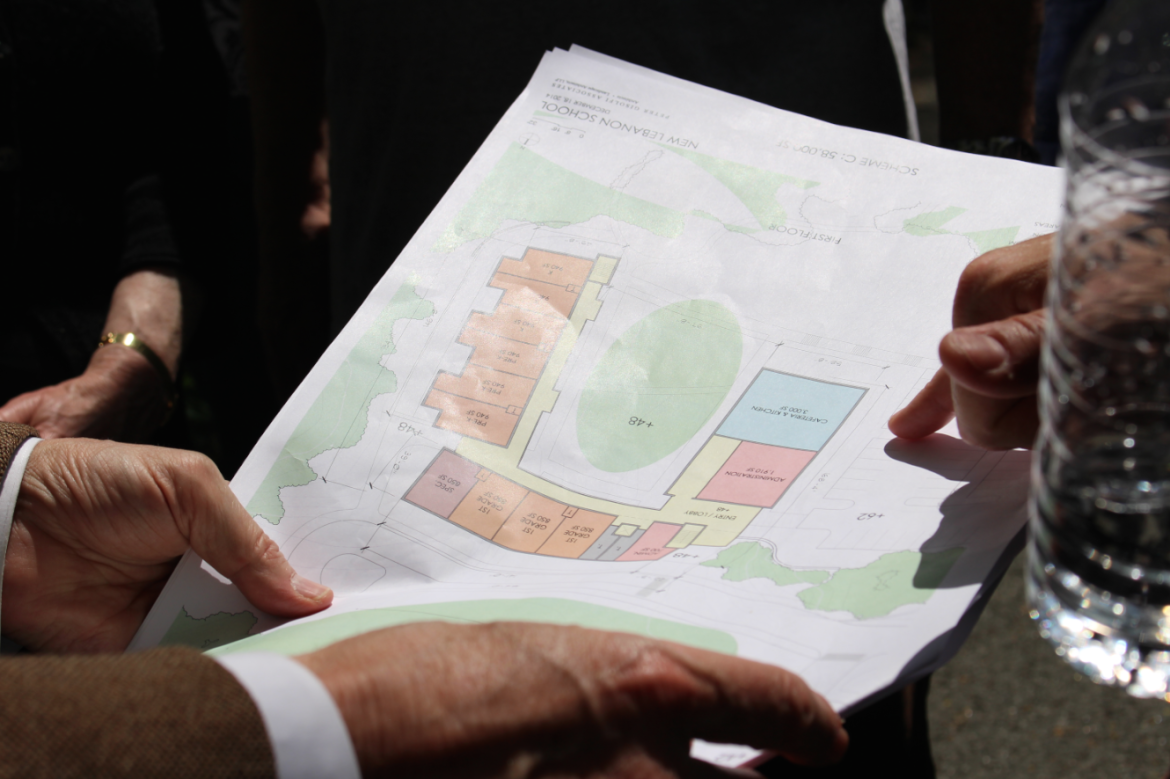 The school’s playground would be located inside the green oval in the courtyard formed by the inside of the horseshoe, according to Mr. Tribe of Peter Grisolfi Architects. Credit: Leslie Yager 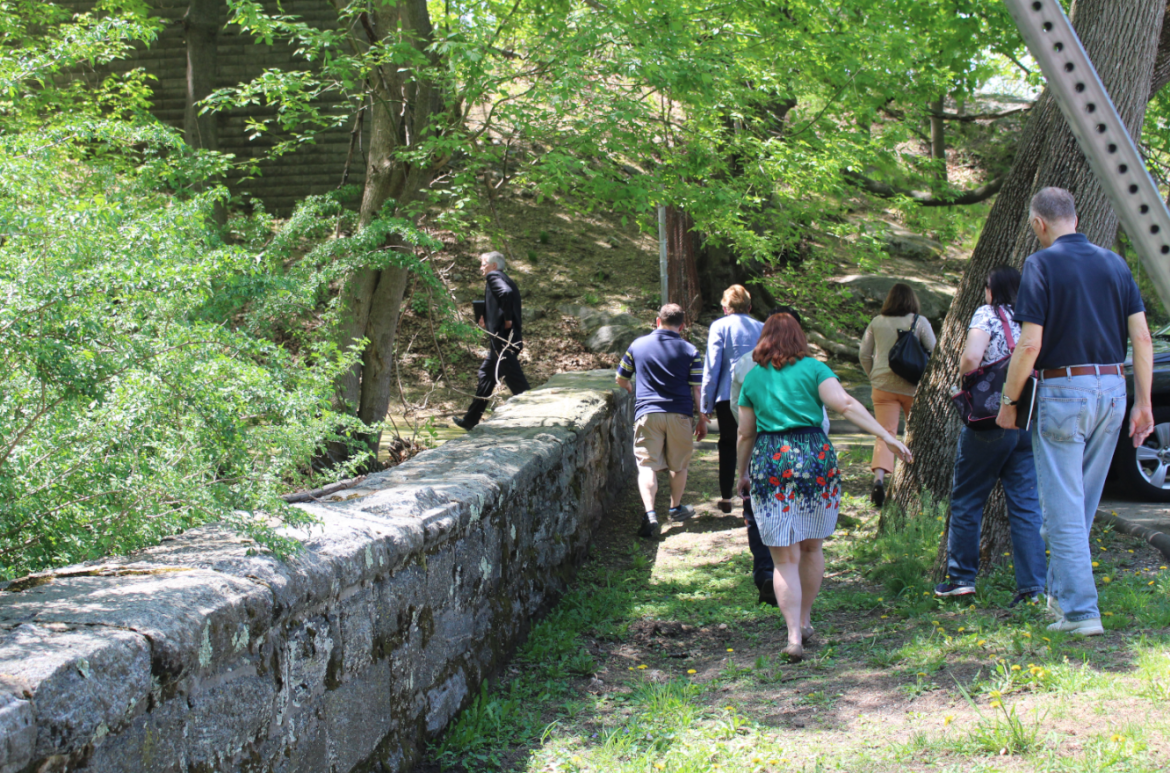 During a foot tour of the site, School Superintendent leads a group of local officials along the perimeter of the site. Credit: Leslie Yager 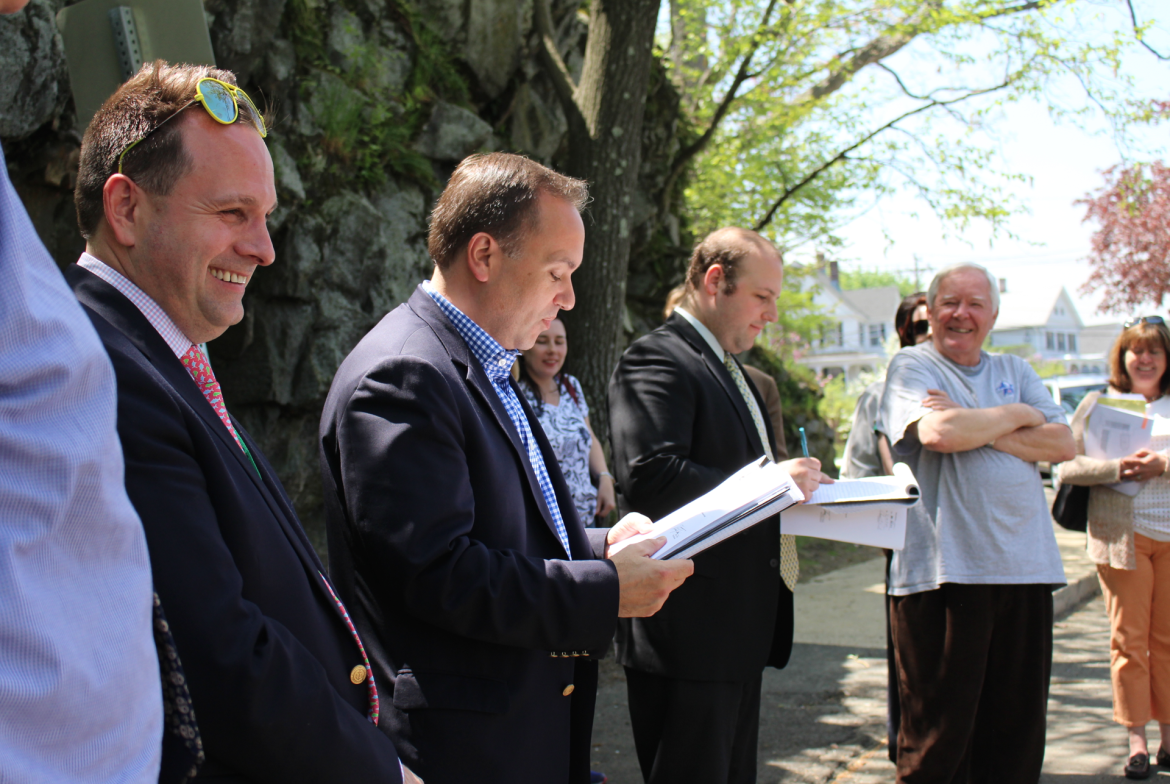 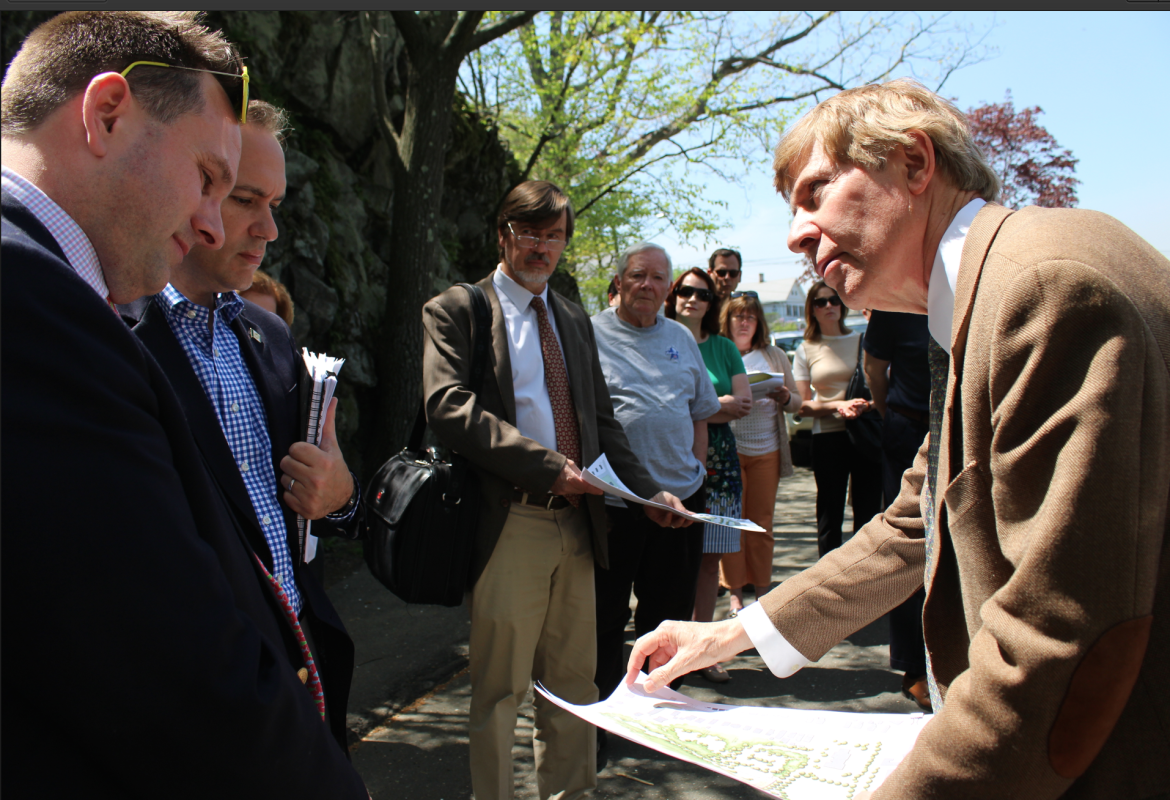 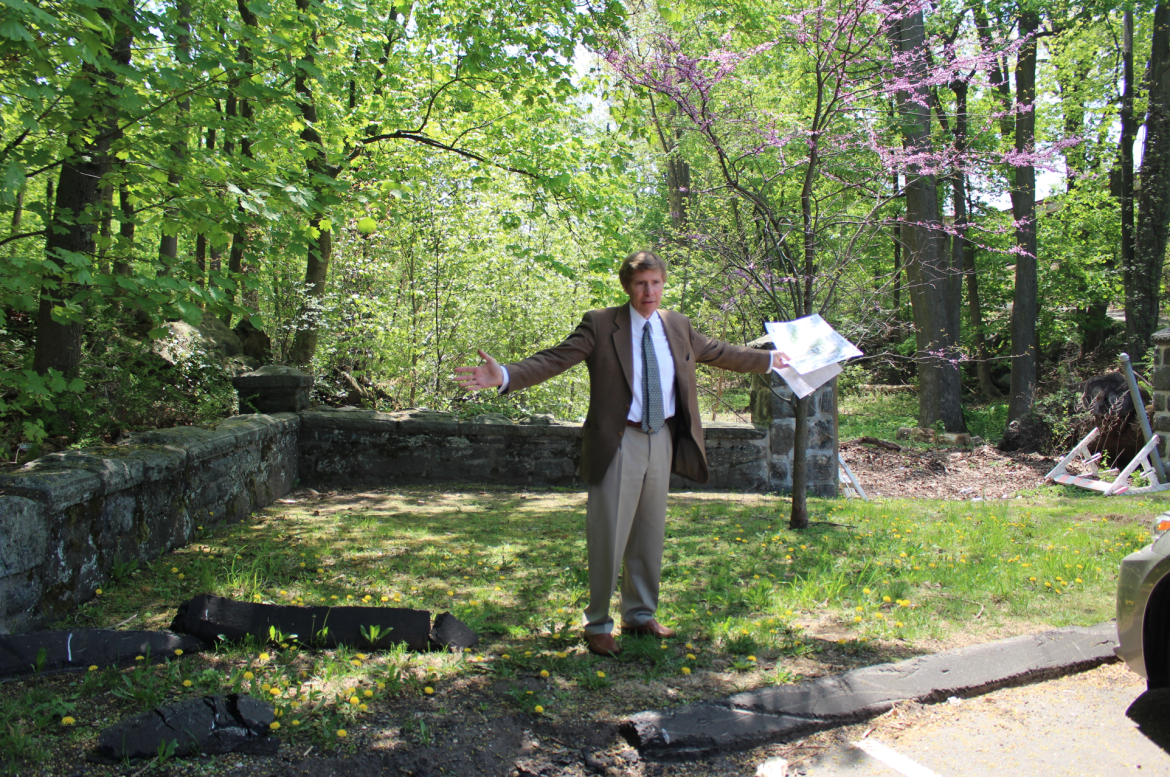 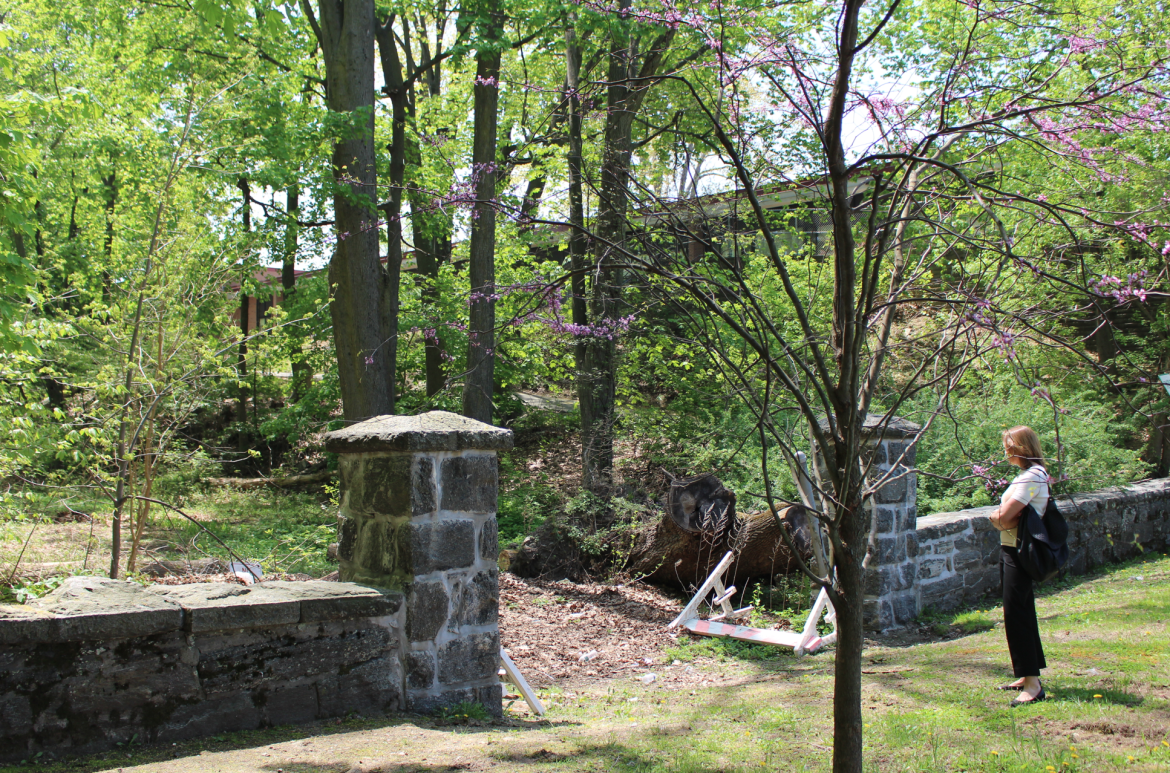 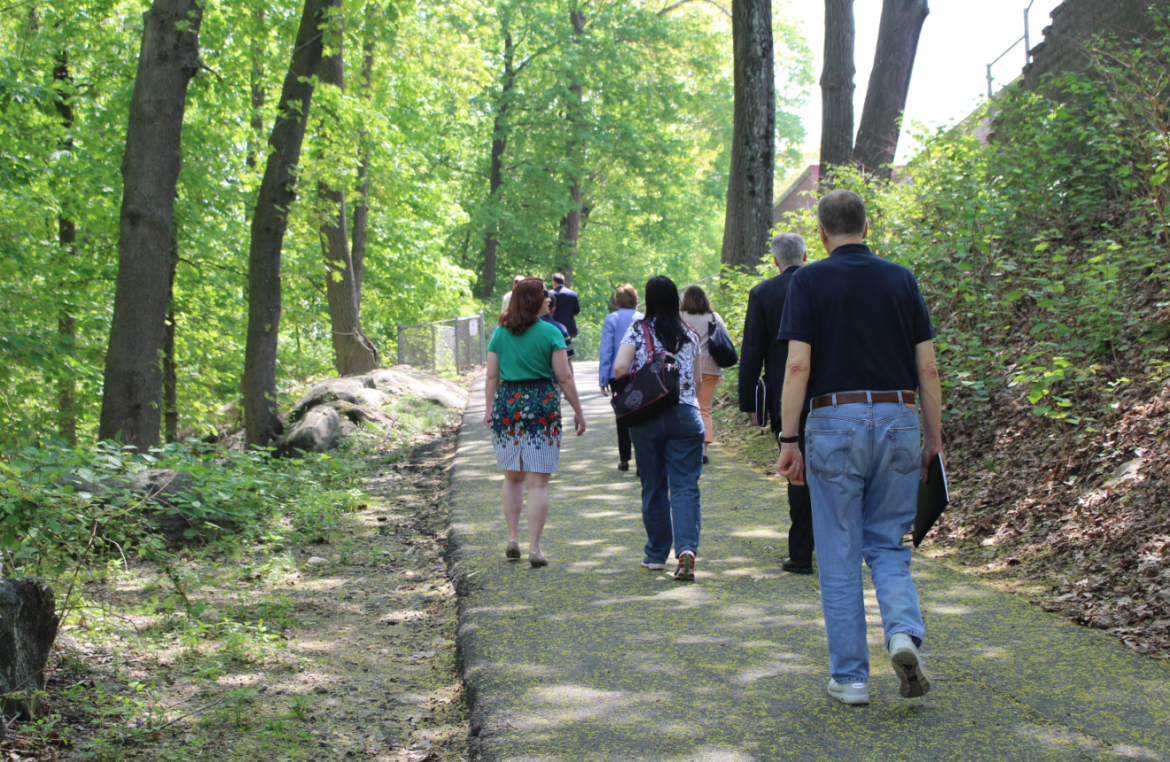 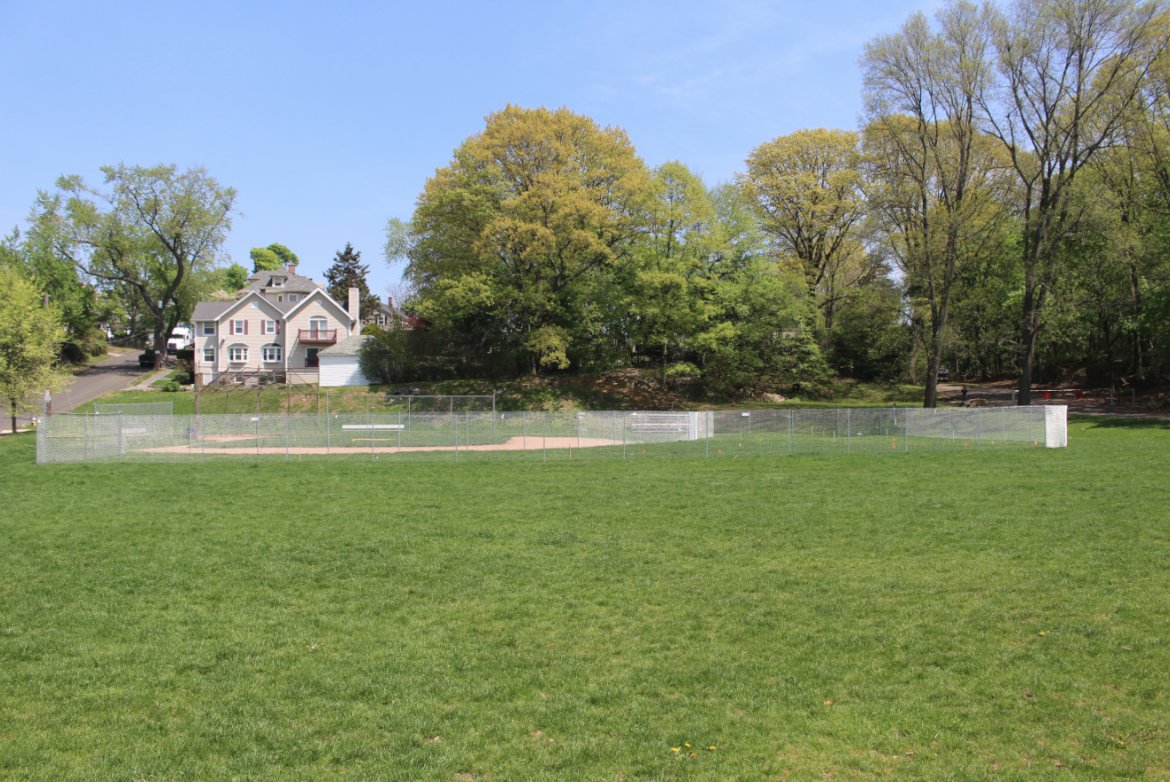 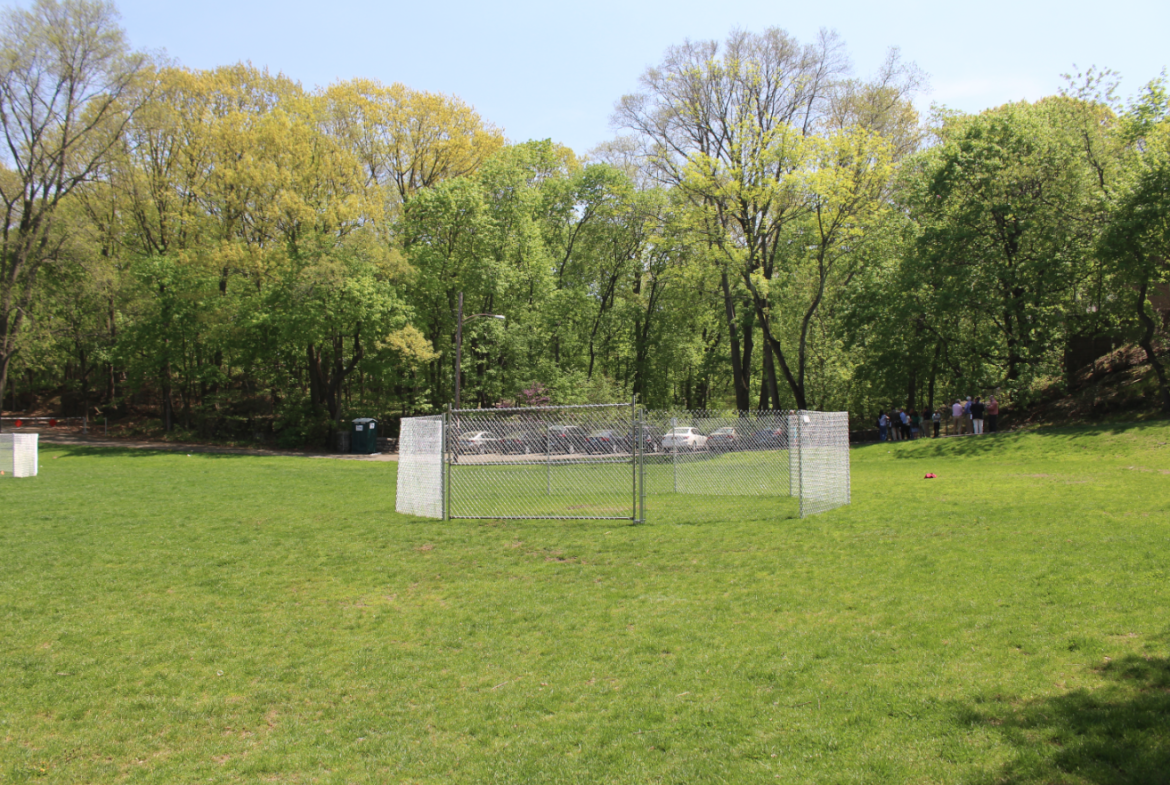