This article has been updated to correct a quote from Ms. Baruno, who said  the Oak trees can grow “80 ft tall by 80 ft wide,” not 8 feed wide.

A hearing was held on Thursday in the Parks & Rec conference room at Greenwich Town Hall regarding the fate of two saplings recently planted by the town in Bible Street Park in Cos Cob.

The two saplings – a Swamp White Oak and a Pin Oak – were planted last summer by teens participating in the Greenwich Youth Conservation Program.

The two trees became controversial after a neighbor whose Grove Street home backs up to the park became concerned about the impacts to her property.

The neighbor, Elaine Baruno, said her property is .12 acres and that she likes to garden and grow vegetables in her yard, which will eventually become shaded when the two Oak trees mature.

Ms. Baruno said there were 8 trees planted in the park in the area of the pre-school and the brook, where it enters a culvert, but she only objects to two of them.

She said the Oak trees can grow “80 ft tall by 80 ft wide,” and that she was also worried about acorns, which attract rodents and ticks.

“I have to spray my yard because of ticks,” she said. “I contracted Lyme from that and I don’t need the extra worry.”

Baruno said her neighbors have an Oak tree that towers over their house. “They need to understand what they’re planting and what the impact will be: Right tree for the right place,” she said.

“One day I came home and saw 8 trees planted in a traditionally grassy area by the brook and pre school,” Baruno said, adding that she objected to the area becoming populated by trees, especially considering the park abuts the Montgomery Pinetum, which has hundreds of acres of trees.

Ms. Baruno said one of the Oak saplings is just 11 feet from her back yard and will eventually tower over her house and drop many leaves on her property.

She said cleanup of leaves and acorns would be a burden on her. “To trim trees is very costly, and will cost me in my retirement when I have limited funds,” she said.

She acknowledged the trees are slow growing, but that eventually they will block the natural light.

As it is, Baruno said natural light from the north was blocked by her neighbor’s recent addition.

“I like trees,” she said. “I have a few small trees – one I raised from a seedling. It’s about the impact it’ll have on my property. The town should be considerate of their bordering neighbors and the impact, not today but in the future,” Baruno said, adding that the Oak trees would shed leaves that would be blown into the culvert.

Thursday’s hearing was overseen by tree warden Bruce Spaman. The meeting was an opportunity for him to hear Ms. Baruno’s concerns as well counterpoints from those who want the trees to stay.

Mr. Spaman said he would release his decision on the fate of the Oak trees within 3 business days.

A neighbor who objected to the removal of the trees, Audrey Skelly, a 30 year resident of Cos Cob Ave, who enjoys the park on a daily basis, said that the area of the park where the trees were planted is grassy, but wet, and that the trees would absorb water.

Ms. Skelly said that the entire area was flooded badly a few years ago and neighbors had to be evacuated. “They came to get us in boats,” she said. “We need the trees to be there to prevent a lot of issues. It is so wet back there.”

“That’s one reason why I was so glad the trees were planted – because they take up the water. It makes the land a bit more solid. I want the trees to stay,” Skelly said.

Ms. Skelly also said it had been wonderful to see the trees planted by teens who were learning the value of trees.

Darrin Wigglesworth, from Greenwich’s Parks and Trees Division said the Town has recently switched over to a “100% mulching program” so the leaves would not wind up clogging the culvert, as Ms. Baruno suggested. “We are mulching all leaves ….This year all our lawn mowers were changed over.”

“If we know if a storm is coming, our Pinetum shed goes to Cos Cob Park and Bible Street Park and they check to make sure there is no debris before the storm comes,” Wigglesworth said.

Furthermore, Wigglesworth said, “Elaine has Cherry trees growing over her neighbor’s property that are shading her property.” 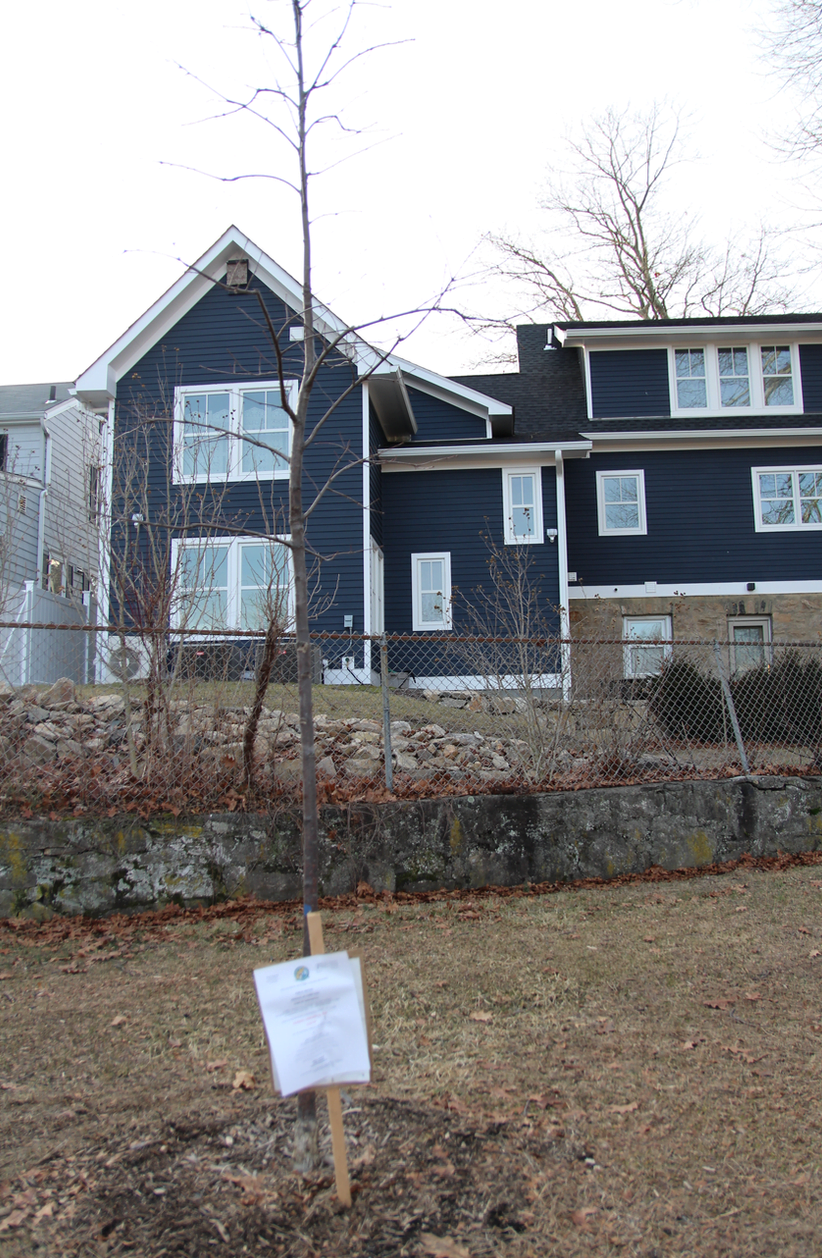 “I don’t think you’re ever going to have the issue you think you will with the sunlight. Your property is up pretty high,” Ms. Skelly said. ” I think you’ll be fine. We have to compromise. Once where there was one house behind me. Now there are multiple condos and my Maple tree died because when they dug they killed the roots.”

“Please change your mind,” Skelly said. “These trees play a very important part in the park.”

Mr. Spaman said the two trees would take about 60-80 years to mature.

In his closing the hearing he said Greenwich has a large scope of trees that his department manages for the public good.

“We have an urban forestry program that looks at all the trees in town including at schools, open space natural forests and parks, and we manage that as a unit,” Spaman said. “We look at Greenwich as a town in a forest.”

That said, Spaman added that the town is constantly concerned about safety, especially on school property.

“We remove a lot of trees from schools and plant trees to make up for the number of trees we remove,” he said.

“Trees are the frontline of our defenses. We’re constantly looking for places that trees will fit and benefit the public in the long term,” he said.  “And the benefit of these trees will be in the long run. That’s our philosophy.”

“Managing the town’s trees so that holistically it’s a forest. People live, work, and go to school in a forest. That’s where we’re coming from. And getting the kids involved in planting – I don’ t think those kids will drop garbage or break branches. We tell them that’s their legacy.”

Mr. Spaman said he would prepare his written final decision in three days and that if the neighbor who objected to the trees is unhappy with the result, she may appeal to Superior Court in Stamford within ten days.

Two Trees Proposed to Be Removed from Bible Street Park