Upper Crust Bagel Company is celebrating 25 years in business in Old Greenwich this year. The milestone was marked by a visit from Greenwich Police Chief James Heavey and First Selectman Fred Camillo, and giant bagels shaped as 25, baked by longtime baker Ricardo Gomez.

Asked the secret to his long successful run in Greenwich, Guerrieri replied simply, “Support the community that supports you.” 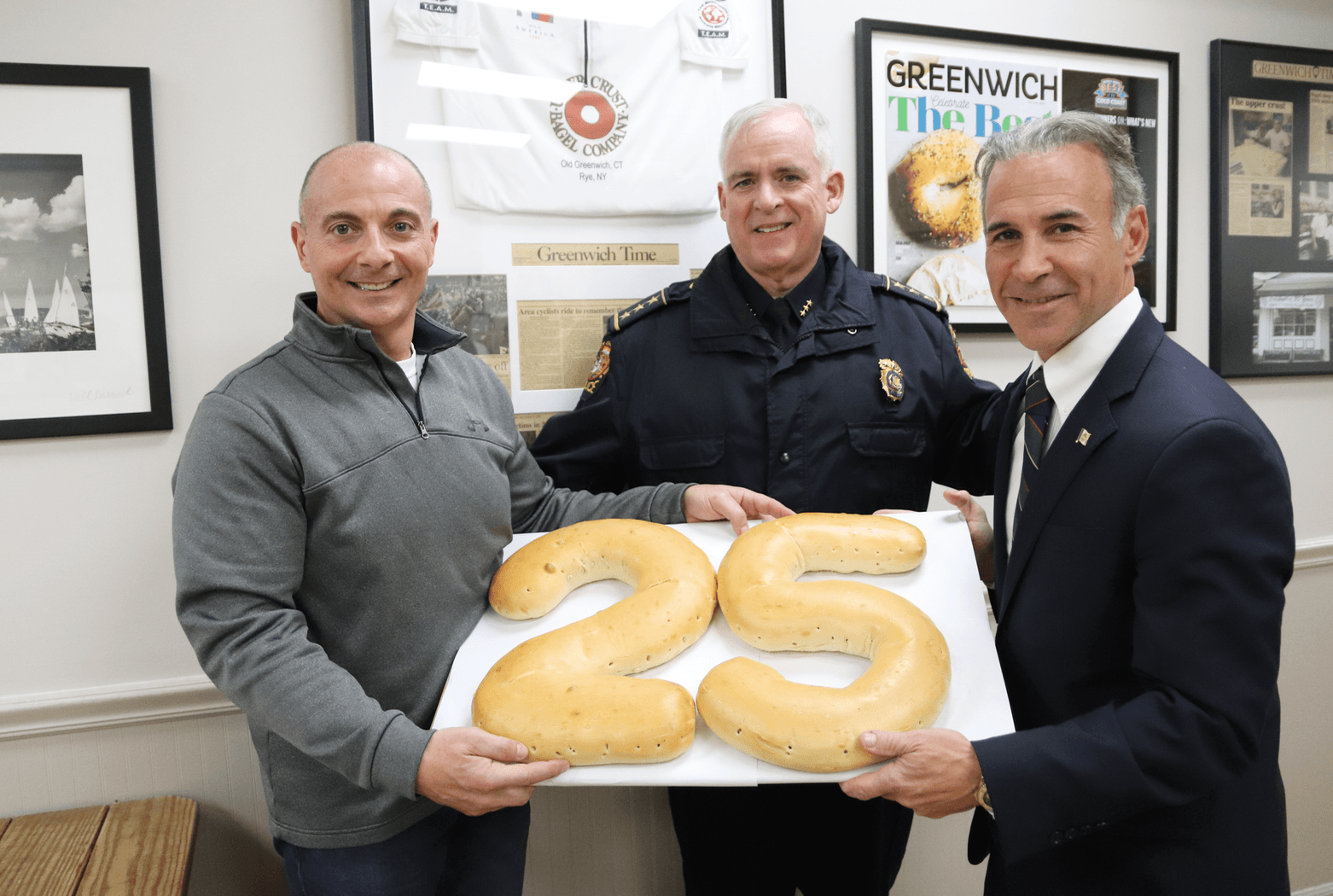 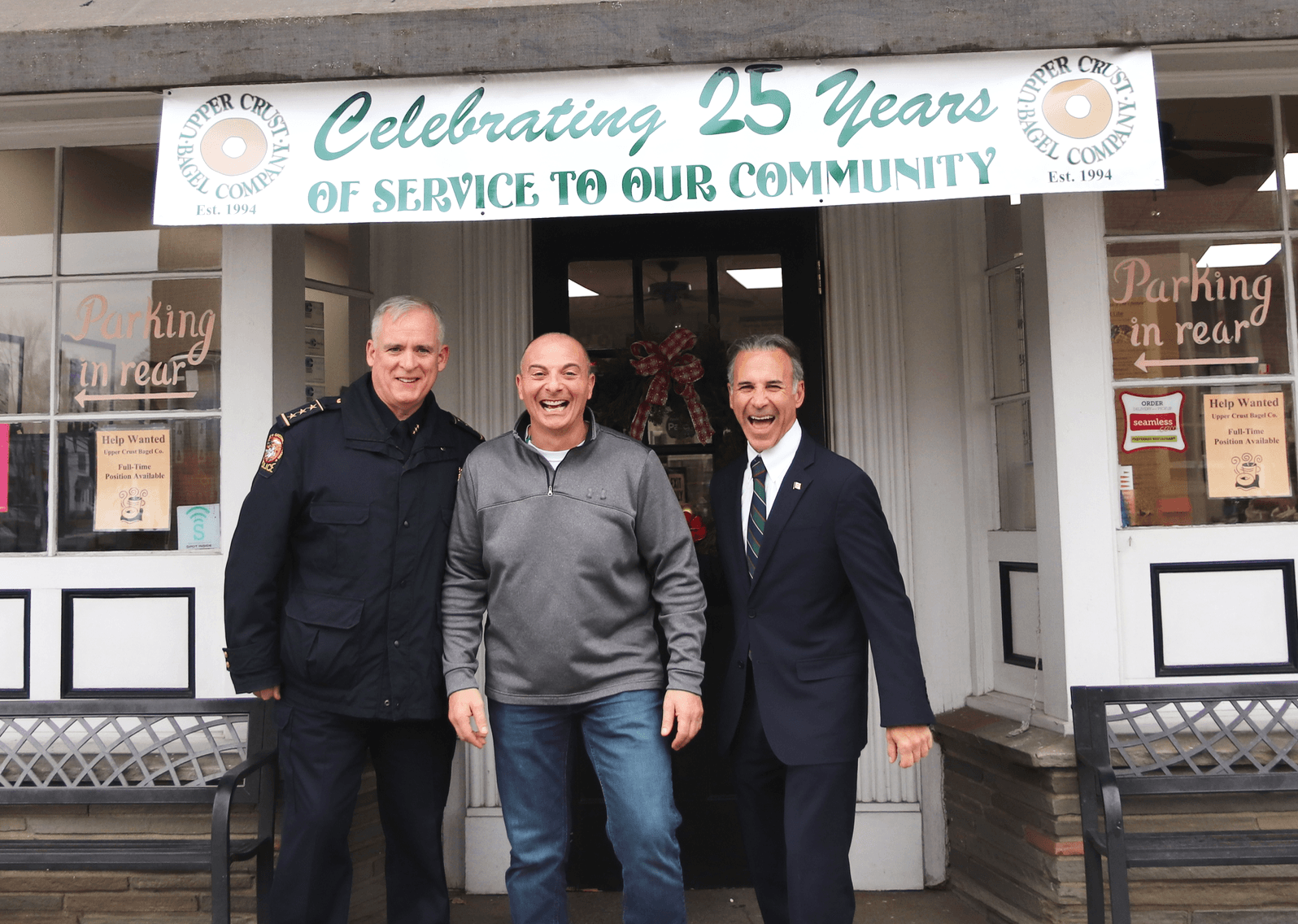 On Saturday they’ll donate bagels for the Boys & Girls Club’s breakfast with Santa. 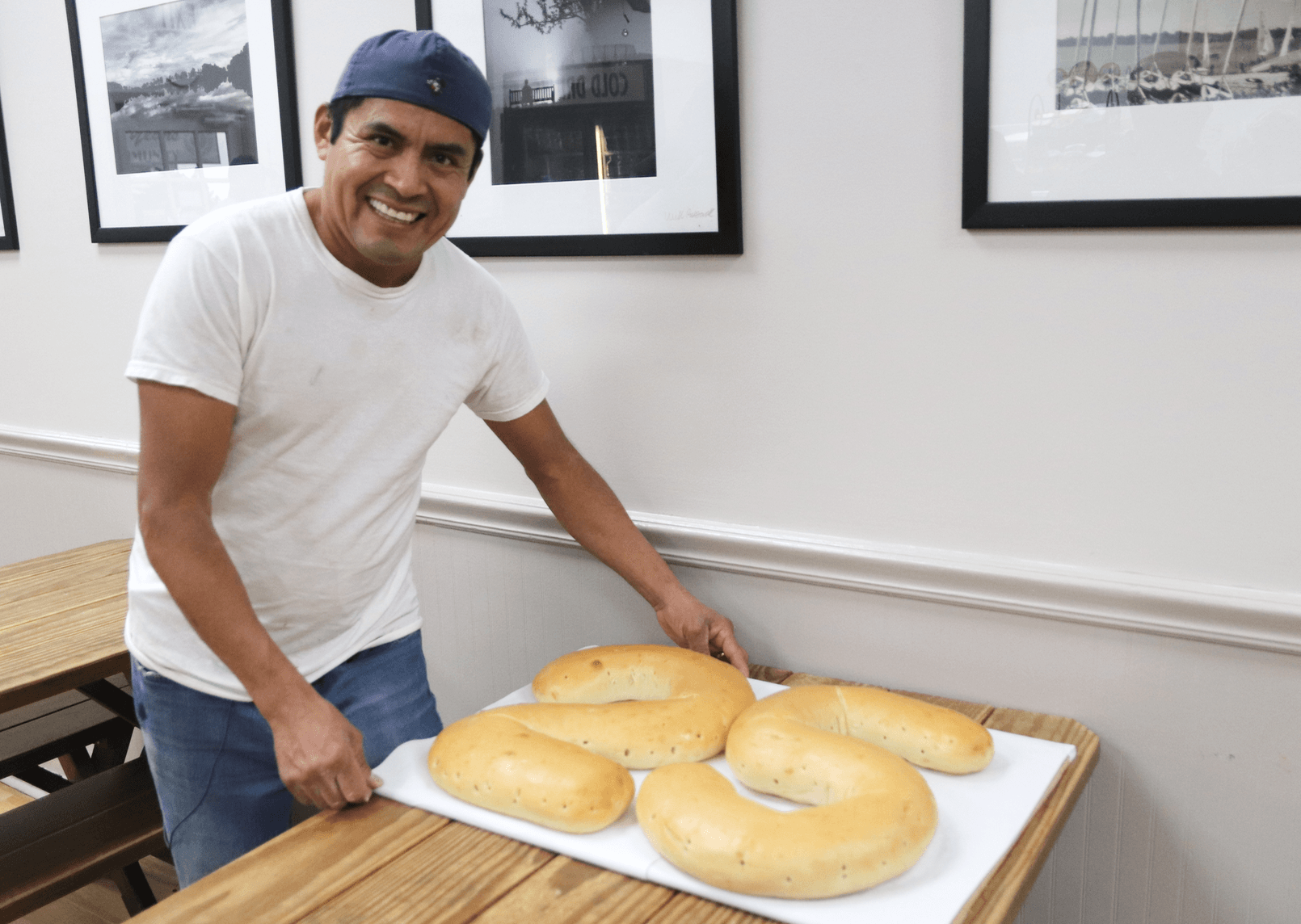 Ricardo Gomez, a 20 year baker at Upper Crust Bagel Co, with the giant bagels in honor of the eatery’s 25 years in business. Dec 4, 2019 Photo: Leslie Yager

“We had an event the year after 9-11 and Rob kept the bagels coming, even as we had way more people turn out for the event than we expected,” he recalled. “They were bringing them when they were still hot. We started cutting them in half and then in quarters so everyone would get some.”

Anyone accustom to the chewy, crusty authentic New York style bagels at Upper Crust knows their perfection is not easily replicated, though it involves a very limited number of ingredients.

“We’ve been doing it the same way, with the same equipment for 25 years. It’s kettle boiled and hearth baked,” he said.

“We’ll mix the dough today, form it, and put it in the fridge overnight. First thing in the morning we toss the dough in the water boiling kettle.”

Guerrieri said prior to opening Upper Crust he worked Mobil Oil Corp and was preparing for a transfer to Oklahoma. He recalled how his ex-wife Amy, at the time his girlfriend, balked.

“She said, ‘No way,'” he recalled. “I had driven down to Greenwich from Rochester and she had driven up from New Jersey with bagels. Back in the 80s and 90s there weren’t many places you could get good bagels here. We were driving down Sound Beach Ave to Tod’s Point and stopped at the light when we saw this spot,” he said, gesturing to his busy eatery. “It was the former Lake’s Drug Store and it was empty. She said we need to open a bagel place right here.”

Since then there have been memorable moments including George W Bush’s visit to the neighborhood for a fundraiser at the home of Scott Frantz. Chief Heavey recalled that Guerrieri how fed the Secret Service members. In fact, there is a montage of photos and clippings on the wall at Upper crust.

“Rob not only has terrific food and wonderful service,” said First Selectman Fred Camillo. “I consider him a pillar of the community. He responds immediately when people reach out.”

Reached by email, Amy Guerrieri, said, “As co-owner of the Upper Crust Bagel Company, I have loved being a big part of the community. The support has been amazing and we are blessed.”

Amy went on to say that one of the greatest joys is being able to give back to all the wonderful organizations and events in town.

“I love seeing the smiles on customers’ faces when they are enjoying all the goodies from Upper Crust.  A lot of people, when they move away or go off to college, make Upper Crust Bagel their first stop when they get back in town. We love this and we love our customers,” she added. 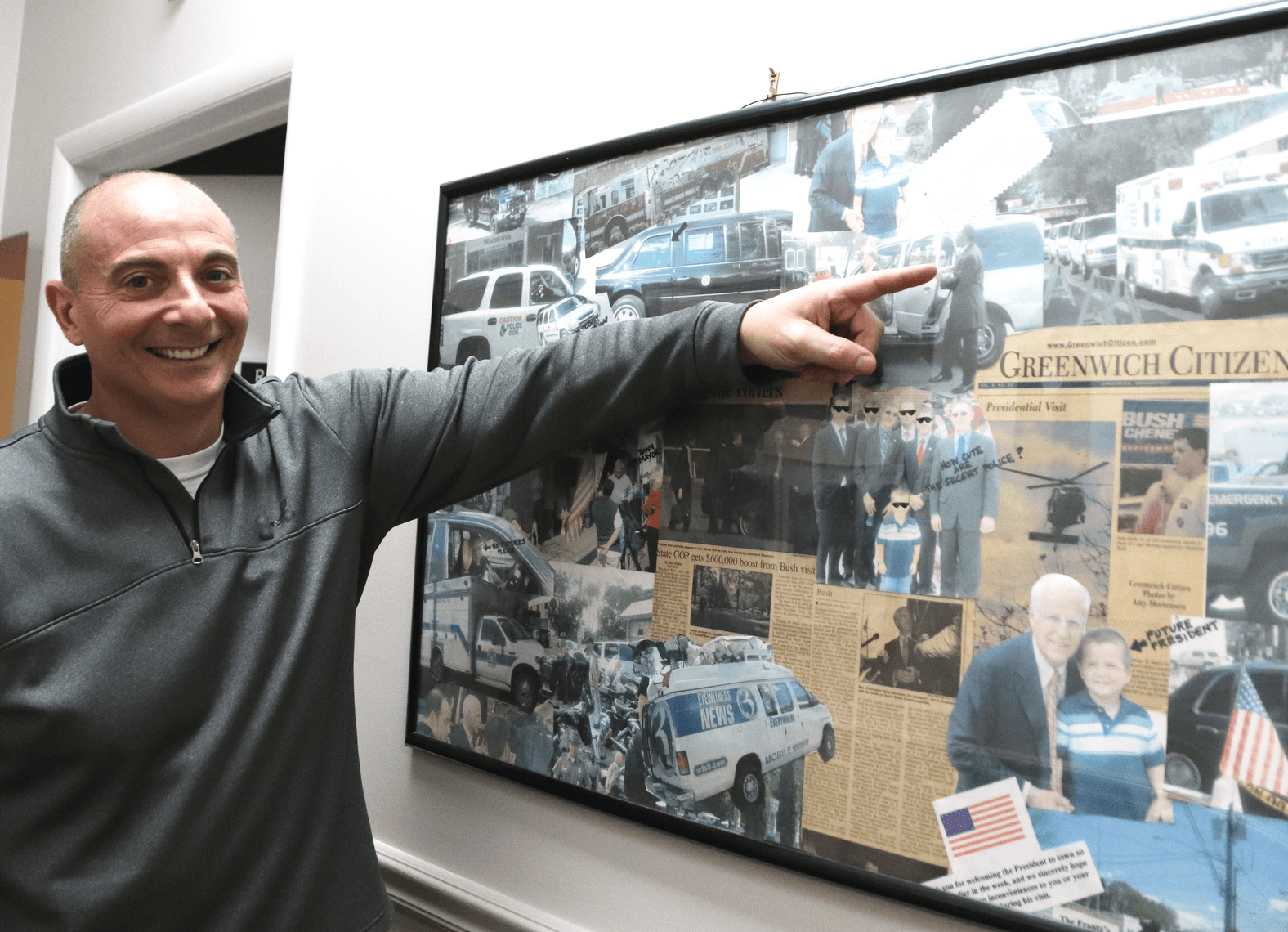 Rob Guerrieri shows a photo and news clipping montage with some of the coverage of George Bush’s visit to Greenwich. 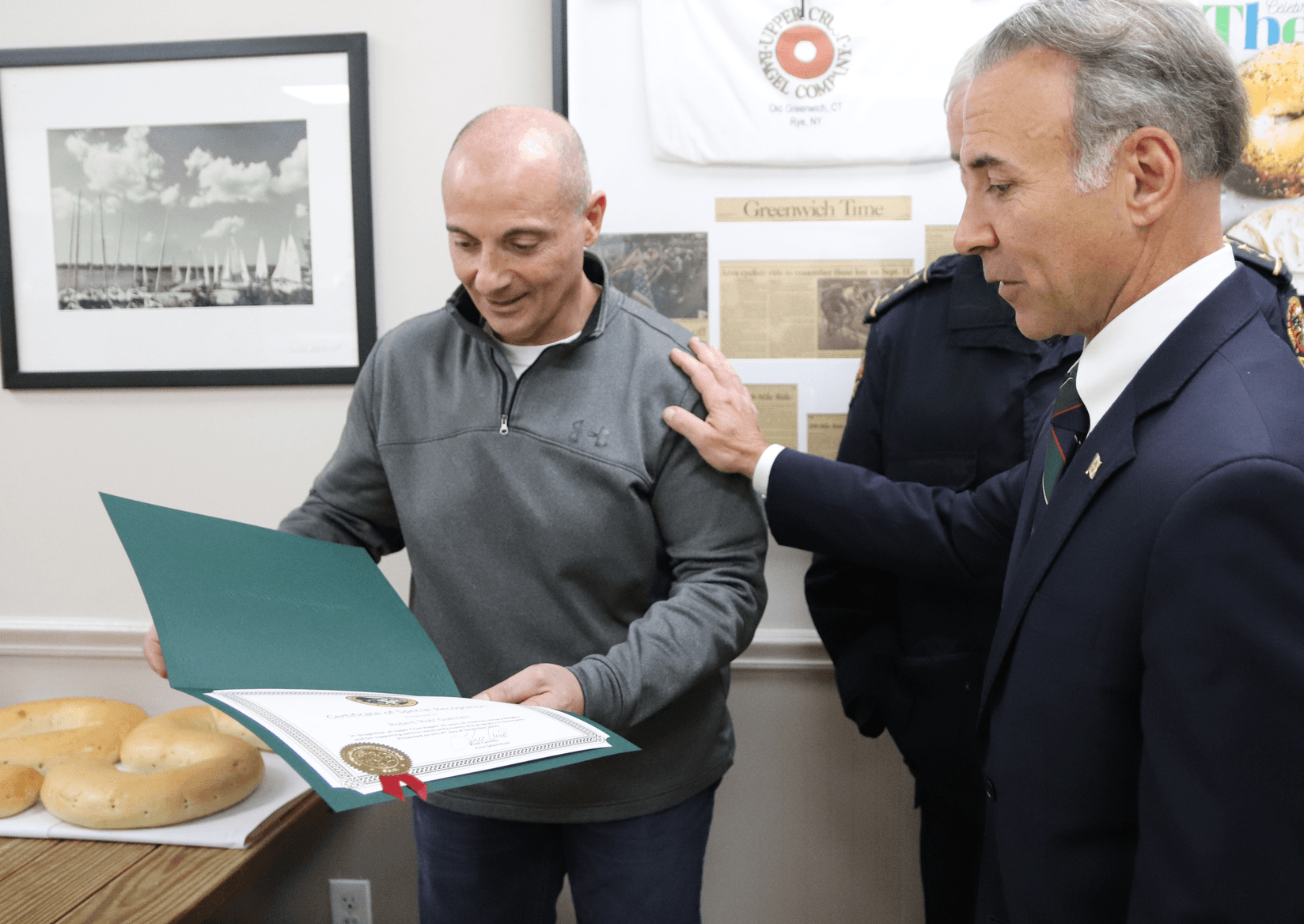 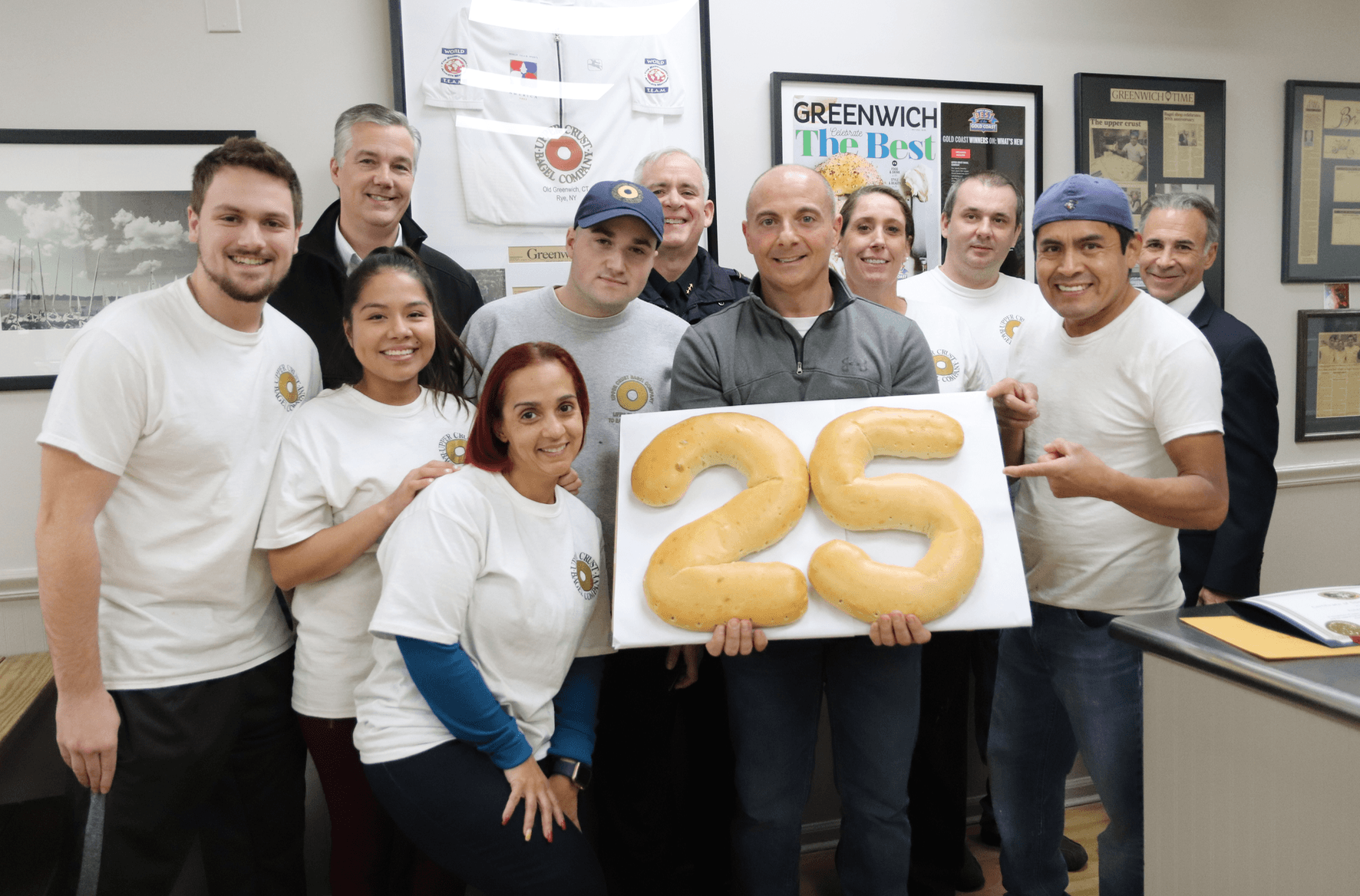