Sabine Schoenberg, the founder and host of This New House, is busy with her current project at 130 Old Church Rd, re-building a 1930s house that had a 60’s flat roof addition that suffered from years of water damage and termites. Schoenberg explained that she intended to renovate the house at Old Church Rd, but there was just so much termite and water damage that even the walls were in very poor shape. “It  became necessary to take it down to the first floor and add on stories,” she said. “The Town of Greenwich considers it a complete demolition.” 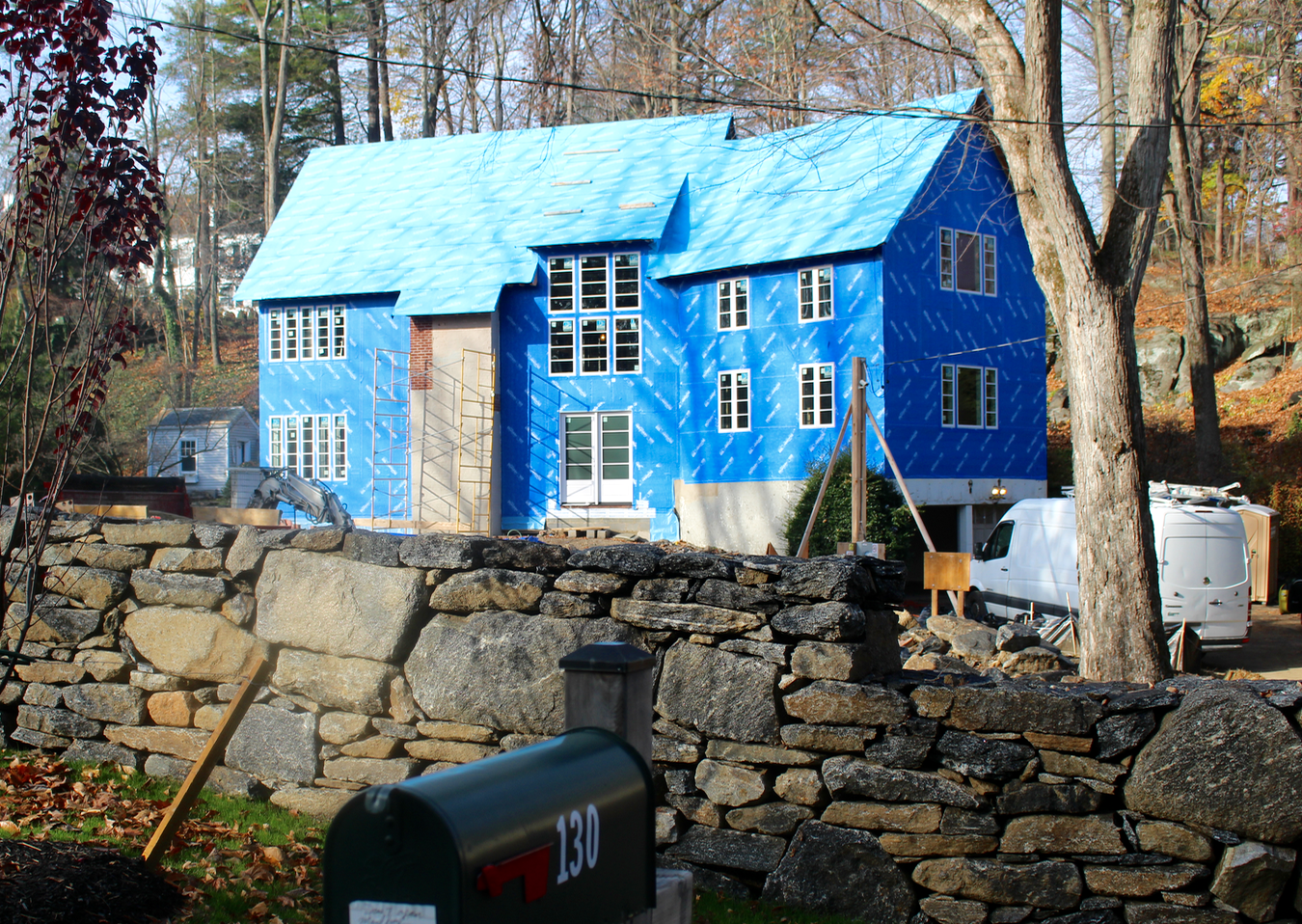 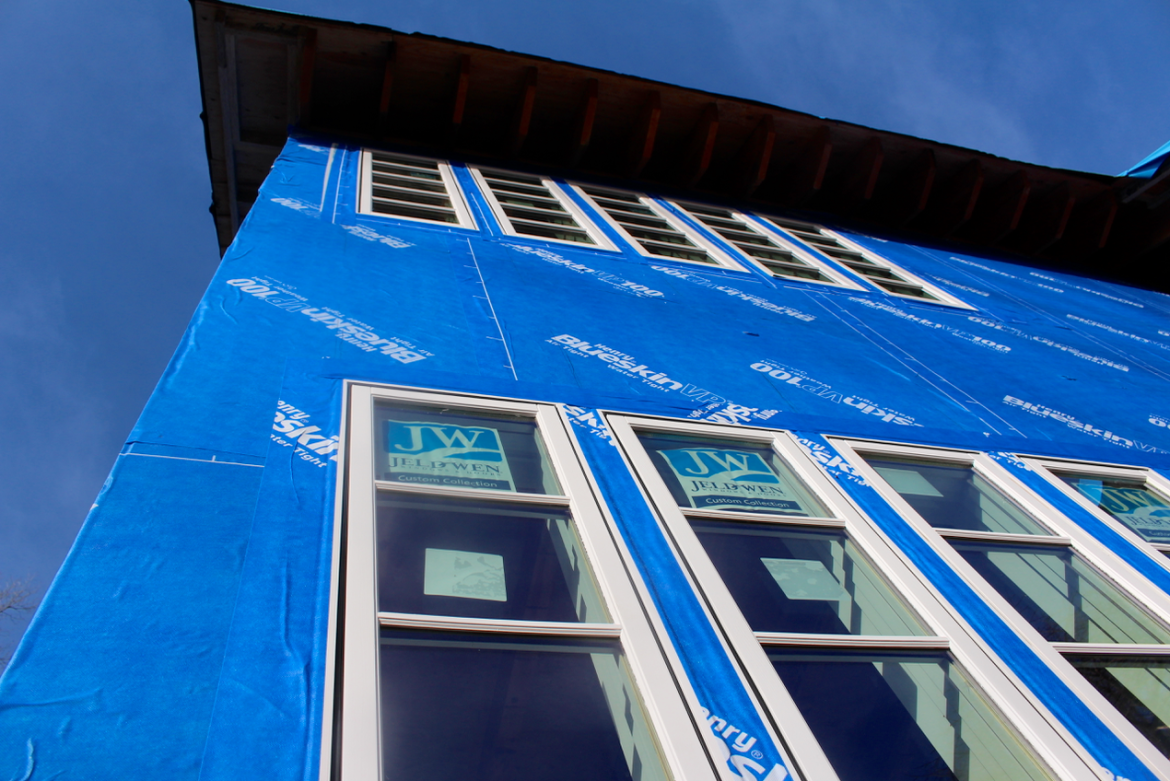 Driving down Old Church Road it’s impossible to miss the big blue house. Though the house will ultimately be sided with cedar shingles, Schoenberg is happy to show off her project dressed in BlueSkin by Henry Company.

The BlueSkin is just one of the highly-efficient, environmentally friendly products she has selected for the project. Schoenberg said the BlueSkin has been used commercially for years, but only recently offered for residential construction. 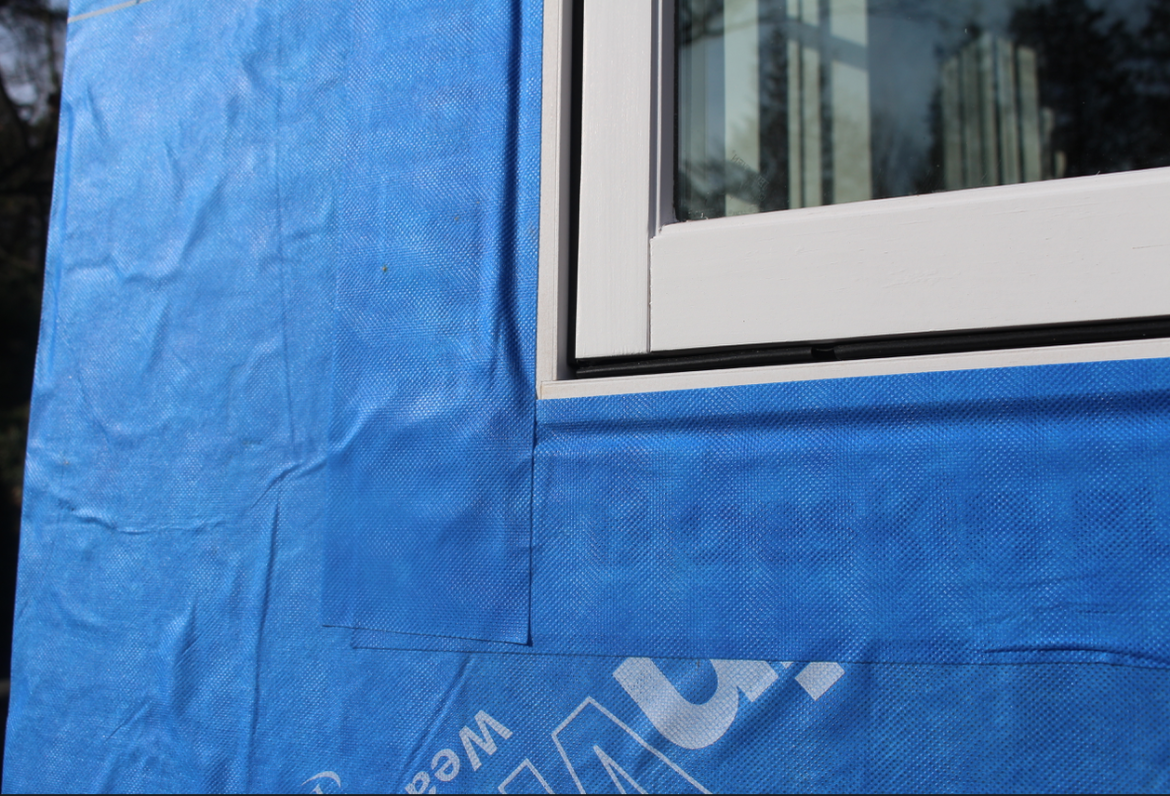 To the touch the BlueSkin, which comes in rolls of different widths, feels papery, like fusible fabric interfacing. The product comes in rolls and self-adheres in a fashion to wall paper with a peel off backing.

“Unlike other housewraps, with the BlueSkin by Henry Company product, you can put a nail through it and it doesn’t tear. This is self-sealing. In fact, the fabric clings to the nail. You get an airtight and watertight infiltration barrier, but it’s also breathable.” 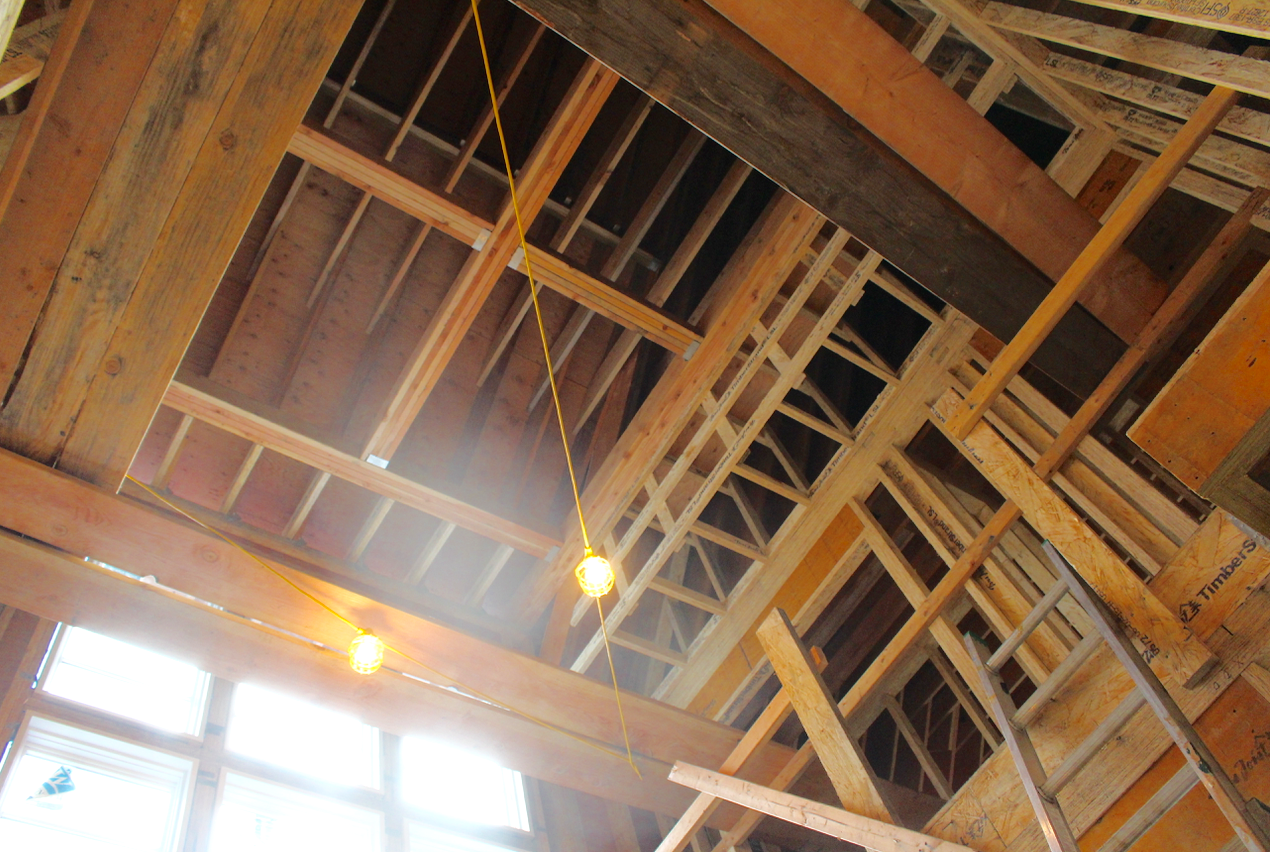 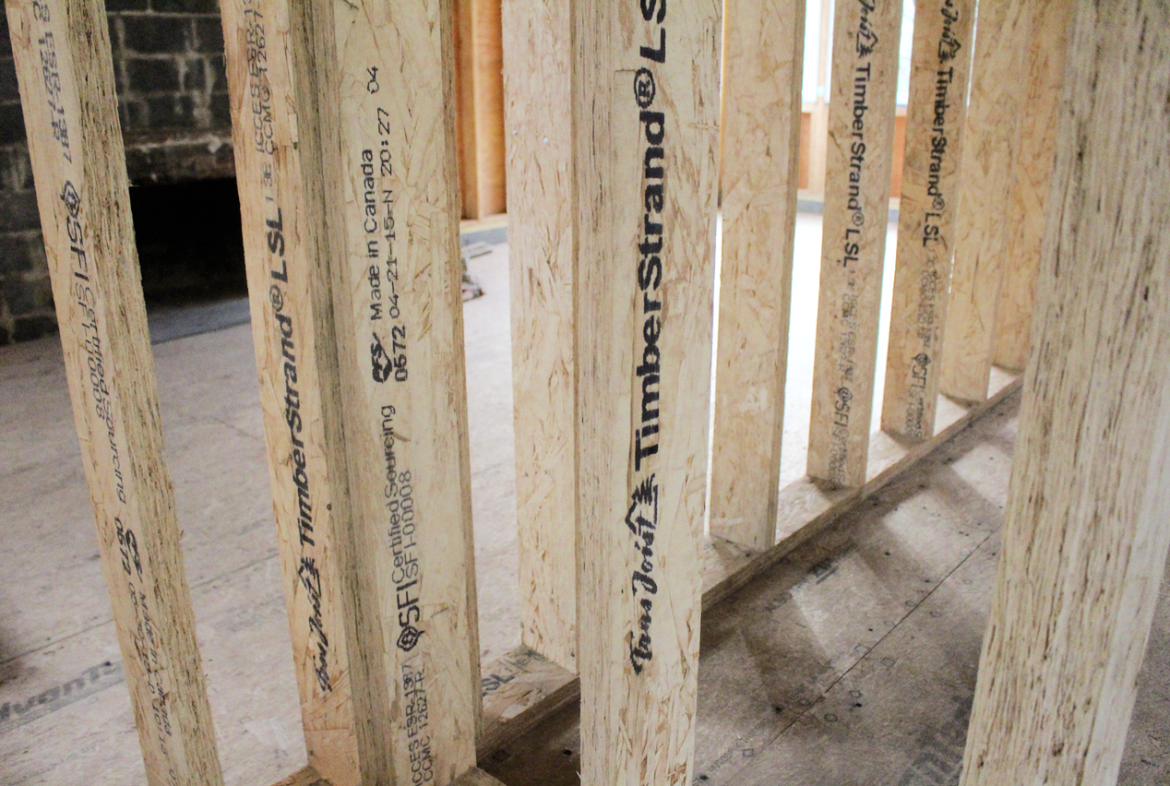 Schoenberg points out the rooms are being framed with lumber she learned about at Interstate Lumber called LSL Truss Joist by Weyerhaeuser.

Inside, Schoenberg points out the rooms are being framed with lumber she learned about at Interstate Lumber called LSL Truss Joist by Weyerhaeuser. “It’s very eco-friendly,” she said.

“They take young growth lumber and mesh it up into strands and put it under pressure. It uses less wood and is more efficient. From a construction point of view, the wood stays straight and stable and doesn’t shrink. You can get it in all kinds of lengths unlike traditional lumber,” Schoenberg said, as she guided guests through what will be the living room and dining room for a lucky family. 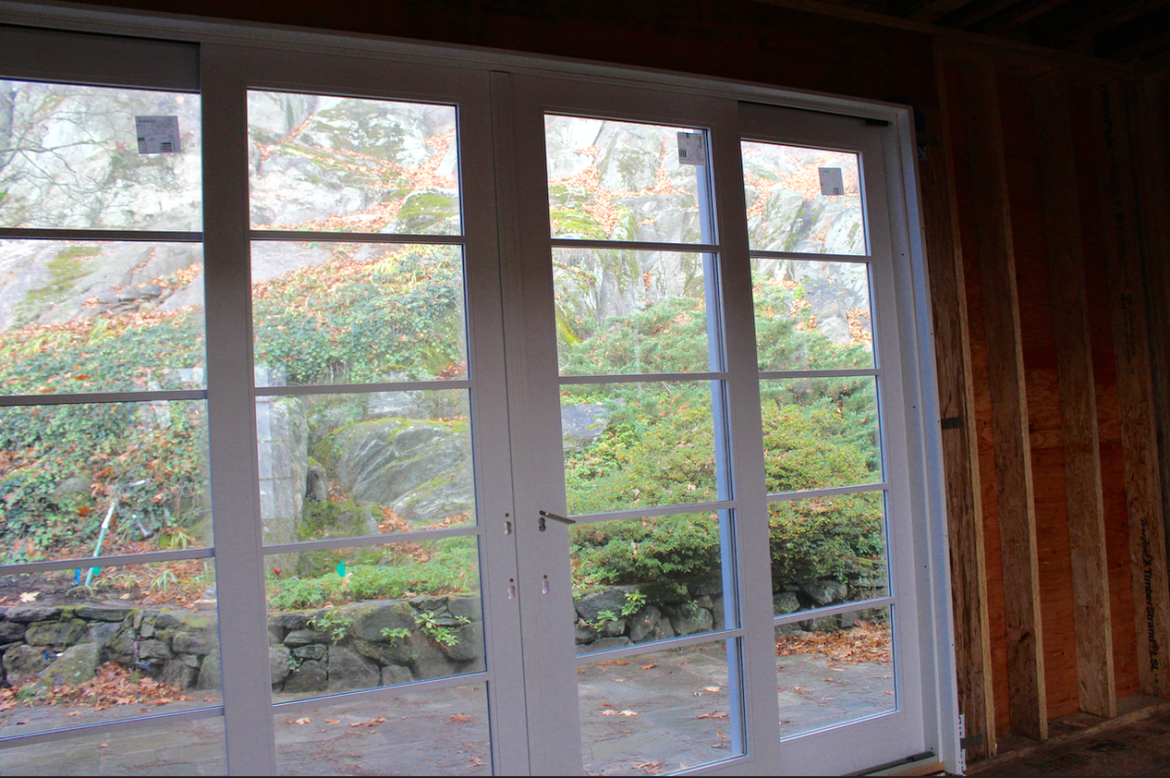 Another product that Schoenberg is excited about are windows and doors from Jeld-Wen. “Glass is one of the least efficient building materials,” she said. “This has a triple layer that cuts out UV and doesn’t fade upholstery or curtains.”

“I wanted wood windows, not aluminum. Aluminum doesn’t involve a green process,” she said, adding that Jeld-Wen’s AuraLast process includes a lifetime guarantee. “It protects against termites and water saturation.”

“With new energy-efficient construction, on one hand you want to super-insulate the building envelope. But you also want to make sure you have proper air and moisture conditions inside the house,” she said. 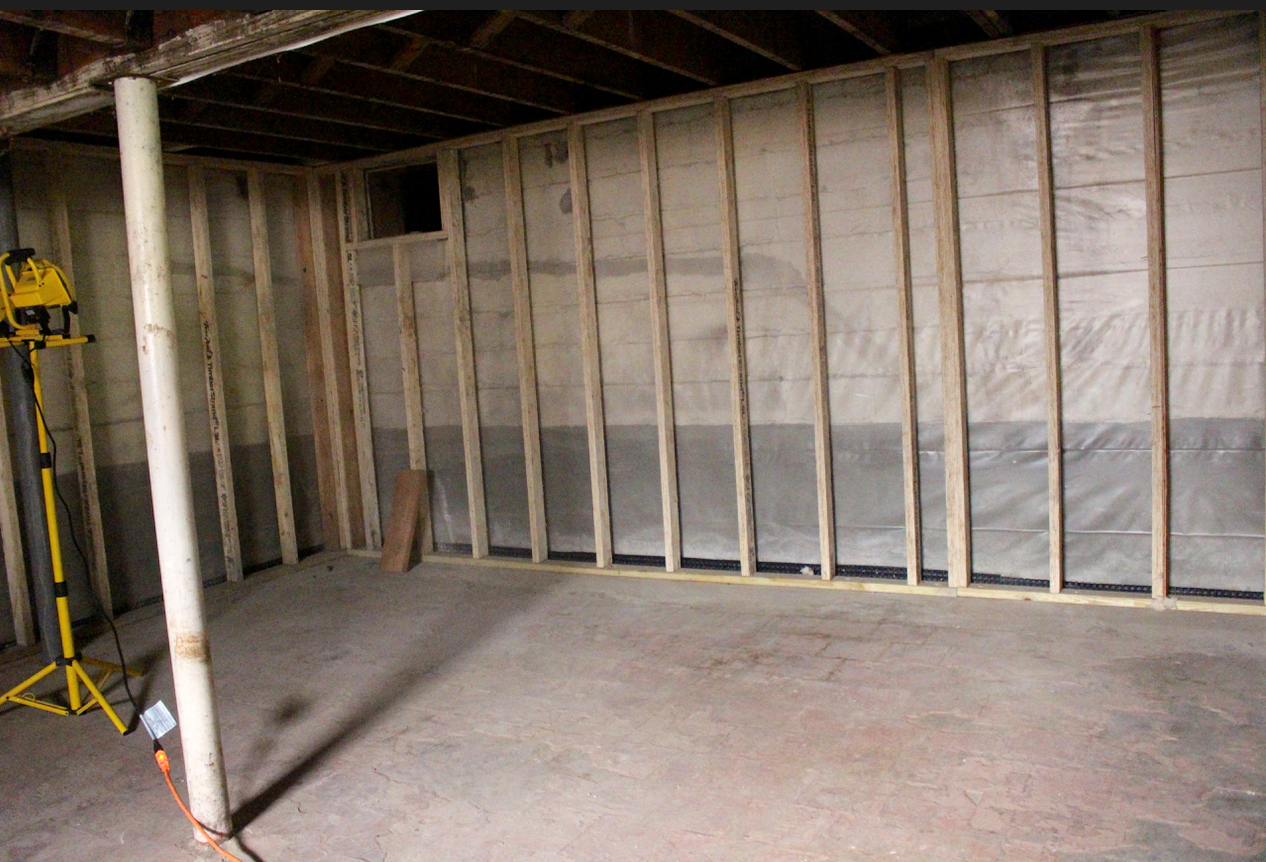 American Dry Basement Systems do their part in the 1930s basement, which will eventually become a playroom at 130 Old Church Rd. Credit: Leslie Yager

In the basement, which was original to the house, Schoenberg said she worked with American Dry Basement Systems who offer a product called SuperCrete, which goes onto the concrete walls where it is absorbed into the cinder block and forms a seal.

“It’s a different process than just painting,” Schoenberg said. “They also created a perimeter drainage channel that goes all the way around. It’s lined with plastic.”

Schoenberg said the owner of American Dry Basement Systems also owns Mold Pro. “It’s the coolest botanical material. It’s a mist — they come in and got it in a two step process. I recommend anyone with a basement they’re thinking of converting into finished basement look at it.”

Gesturing across the basement in progress, she said,”This will be a playroom. With young children, you want the best quality.”

“Every house has a soul. It’s not just about square footage because bigger is not better. Better is better,” Schoenberg said emphatically. “This New House is all about healthy and smart living.”