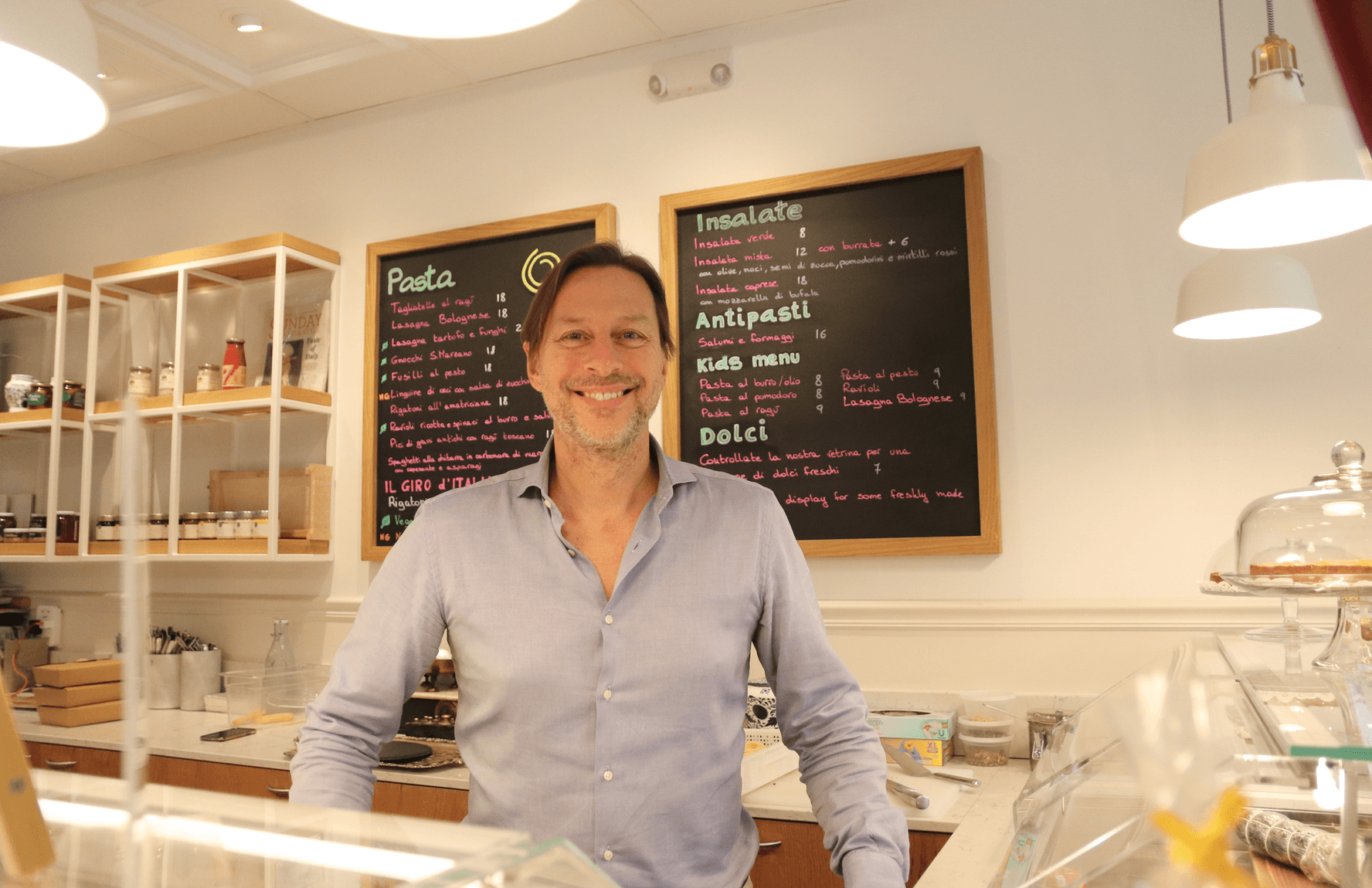 Since opening in fall 2018, Federico Perandin’s Il Pastaficio in Cos Cob’s Mill Pond Center has become a destination for high quality artisanal Italian pasta to take home and prepare, and dishes made from fresh, organic ingredients.

Perandin, who developed authentic Italian recipes after scouring both urban and remote regions of his home country, will now take his concept to a new level with I Viaggi de Il Pastaficio.

In the first of what he hopes will be a series of culinary trips to Italy, each with a focus on a few particular regions or cities in Italy, there will be a trip in May 2020.

Mr. Perandin will escort up to a dozen people from the Greenwich area to what is known as the Food Valley: Bologna, Sangiovese, Parma, Modena, Verona, Valeggio sul Mincio, Montegrotto Terme, Padova and Venezia.

“These will not be regular trips,” said Perandin who will host the tour himself. “They are culinary trips where you’ll discover what only the locals know, live the life of a local as well as dine is some of the most innovative and exclusive restaurants in the world. You will take part to  pasta making classes, enjoy a wine tasting at a 175 hectares estate with six vineyards and discover the secrets behind the production of some of the gems of Italian food heritage as Parmigiano Reggiano, Aceto di Modena, Prosciutto di Parma and Tortellini.”

Perandin said the group will experience first-hand the life of the locals traveling on a Burchiello, enjoying delectable tastings during a Bacaro tour and relaxing at the natural hot springs in Montegrotto Terme.

Perandin said the weather in May is ideal and the group will rendezvous in Bologna.

Day 2  – May 9th – will feature in the morning a walking tour of downtown Bologna stopping at the local food market to taste some of their specialties. In the early afternoon guests will move to a farmhouse in the countryside outside Bologna to enjoy a private cooking class learning how to make pasta with a rolling pin, and make Tagliatelle and Tortellini.

“In Bologna every family still makes tortellini by hand. It’s a family tradition. You’ll learn how to make a tortellini,” Perandin said.

Day 3. May 10th  – Guests will move to Sangiovese for a Wine Tour in a 175 hectares estate including 6 vineyards with lunch in a local restaurant. Experience the flavors and learn how to pair wines with different foods. The group will move to Dozza, one of the most beautiful small towns in Italy, to  have lunch at a “trattoria” and visit the stunning medieval castle and its “Enoteca Regionale” for some wine tasting.

Day 4. May 11th – The group will be exposed to two different sides of the country’s culinary history: Balsamic Vinegar and Parmigiano Reggiano. In the morning there will be a visit to a local producer of Parmigiano Reggiano, to learn the production cycle, visit the aging room and enjoy some cheese tasting. “Known globally, this is one of the most traditional ingredients. Italy protects the quality of both the balsamic vinegar of Modena and the Parmigiano,” Perandin explained.

At lunch time they will move to Modena home to best Balsamic vinegar.  There will be a visit to a longtime balsamic vinegar producer followed by lunch in their ancient Osteria including sampling of varieties of this versatile condiment.

“After a day being immersed in tradition of the Parmigiano Reggiano, which is the basis of so many of our dishes, we will have dinner at Osteria Francescana,” Perandin continued.  “Chef and owner Massimo Bottura, a native of Modena, is very innovative and his restaurant is considered today the best in Europe.”

Osteria Francescana is a three Michelin star restaurant that in 2018 topped the World’s 50 Best Restaurants list.

Day 5. May 12th – The group will move on to Parma, known worldwide for its Prosciutto.

In the morning there will be a tour of the 15th century Torrechiara Castle in Langhirano, one of the most important examples of Italian castle architecture. Built between 1448 and 1460 by Pier Maria Rossi, the castle has rich inside decorations: the “Golden Room,” attributed to Benedetto Bembo, and the “Salon of the Grotesques” are extraordinary. The group will have lunch in the castle area.

Then they will enjoy a guided private tour of a prosciutto producer in the hills of Parma where they make the Prosciutto di Parma.

“This is an ingredient extremely important for our culture and tradition,” Perandin said, adding that its quality is protected by a DOP certificate. DOP is short for Denominazione di Origine Protetta. It literally means Protected Designation of Origin.

Day 6. May 13th –  The group will visit Valeggio sul Mincio in the Province of Verona. Valeggio is a picturesque town on the shores of the river Mincio with medieval fortifications, a ruined castle and known for the Tortellini.

“Here we’ll do a tortellini making lab, with a visit and sampling of these little hand made gems,” Perandin said. “It’s a very tricky pasta.”

After lunch the group will move to Verona, the setting of Shakespeare’s tragic love story between Romeo and Juliet, for a walk in the historic district and visit to Verona Arena, built in the first century. It is still in use today and is internationally famous for the large-scale opera performances given there.

“We want people to really experience the history and tradition of our literature and our culture,” Perandin said.

Day 7. May 14th – After a day of history and literature, guests will be relaxing, enjoying the natural hot springs at their hotel in Montegrotto Terme, one of the most renowned spa resorts in Europe. That night the group will have dinner at another famous 3 Michelin starred restaurant, Le Calandre, known for its innovative cuisine which has been among the world’s 50 Best Restaurants for more than 10 consecutive years.

Day 8.  May 15th – The group will move to the region of Veneto and enjoy a Burchiello river cruise with views of Venetian Villas of the Brenta Riviera. “The richest Venetian families had spectacular villas built around 1600. The merchants would do business in Venice during the week and head to their countryside villas on weekends,” Perandin said. “They would use Burchiello, a type of boat, to get to their villas along the Brenta River because the area of Venice was very difficult to reach. During the navigation our guest will appreciate the extraordinary beauty of the Riviera del Brenta, and its Villa Pisani in Stra, Villa Widmann in Mira, Villa Foscari known as La Malcontenta.” For lunch the group will eat at a famous restaurant called Il Burchiello in Oriago.

The Burchiello mini-cruise will pass through nine swiveling bridges and five locks, and will conclude in Venice in the fantastic marble scenario of St. Mark’s Basin. There the group will stay at the romantic Hotel Palazzo Giovanelli in Venice.

Day 9. – May 16th – The group will tour the lagoon to experience “the real Venice.” and  visit all 3 renown island: Murano, Burano and Torciello.

“Murano is known for its glass works,” Perandin said. “It’s an age old activity and the traditions are still intact today. We’ll go and see master glassblowers at work and see the island.”

Nearby is the island of Torcello, a virtually uninhabited island, it is home to the oldest monument in the Venetian lagoon, the majestic Basilica of Santa Maria Assunta, with its famed floor mosaic, the ancient Last Judgement. “It was founded in 639 and rebuilt in 1008,” Perandin said.

After a day of history and tradition, lunch will follow at another Michelin starred restaurant called Venissa.

Perandin is from the region of Veneto, where Venice is located. His home town is Padova and the idea is to wind down the trip in the area he calls home.

“I want to share the opposites of Italy – both the tradition and innovation,” Perandin said.

During the last afternoon in Venice, he will bring the group on a Bacaro Tour. “This is something only the locals do,” he said. “You go in different little tiny restaurants for tastings and drink spritz.”

“In this area in Italy, after work you don’t go home and sit down for dinner,” he said. “You go to different osterie, which are bars where you order an ombre (red wine) or a Spritz (Spritz Venezian is an Italian wine-based cocktail), or Prosecco. You have a drink and eat finger foods, which ends up being your dinner at the end of the day.”

Traditional Venetian dishes the group might sample in the bacari in Venice, far from the tourist traps, are called Cicchetti, which are small snacks or side dishes.

Perandin hopes the trip will be a once-in-a-lifetime experience for the group. The idea is to start in Bologna where Perandin studied at University of Bologna, and finish in Venice which is close to his hometown.

“This will be a way of living the life of the locals,” he said, adding that he is eager to share both his roots and the traditions of Italy, as well as new innovative Italian cuisine.

After the last day of the tour members of the group can transfer to Venice Airport, or tack on time and continue their stay on their own.

Mr. Perandin will host an information session about the trip on Monday Dec 9 from 5:00pm to 8:00pm at Il Pastaficio.

See also: Il Pastaficio in Cos Cob: Explore the Cuisine of Italy without Leaving Greenwich