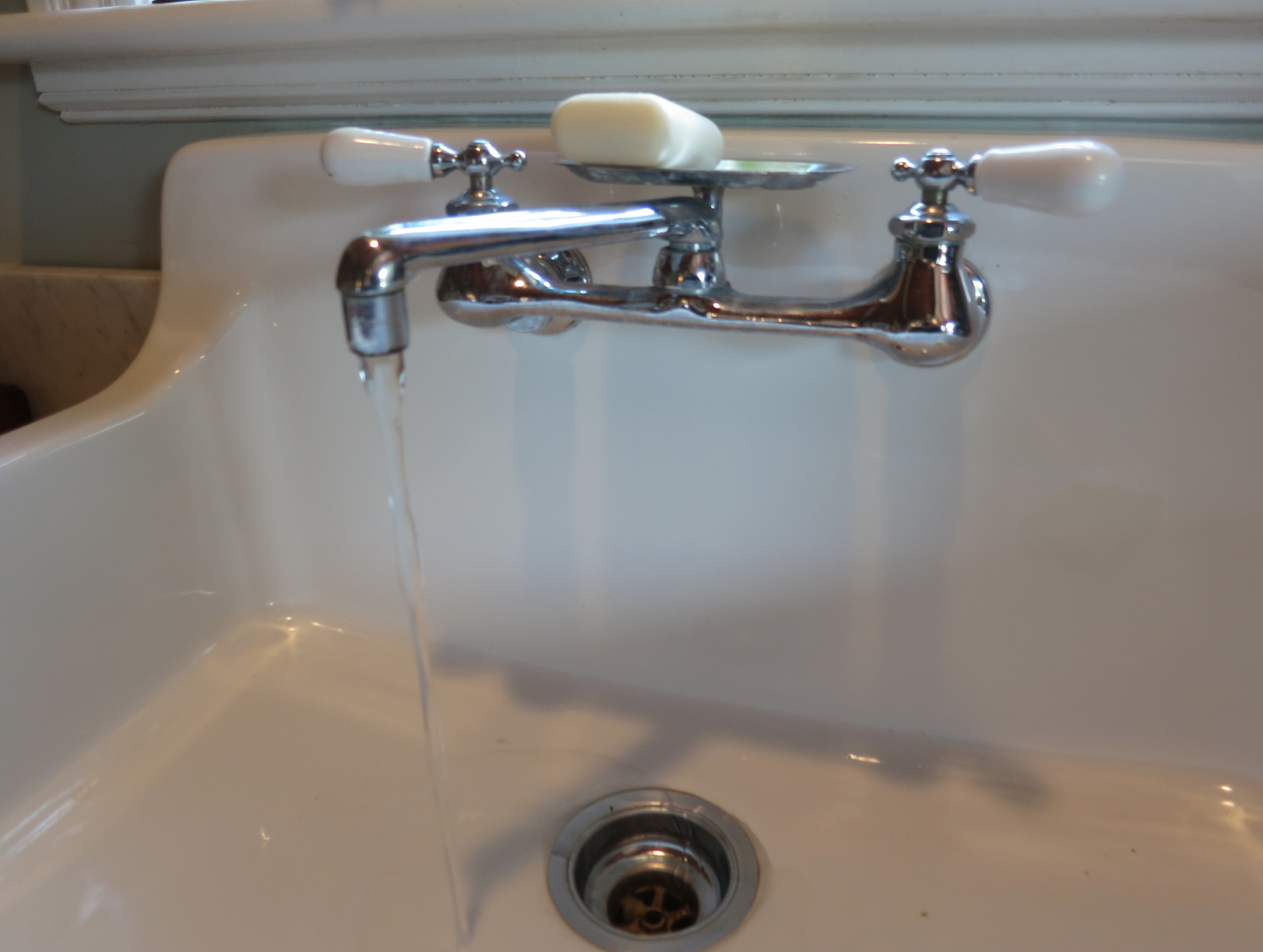 Aquarion is seeking permission from CT Department of Energy and Environmental Protection (DEEP) to divert 1 million gallons of water per day from a well in Cannondale (in Wilton) and the Norwalk River and send it to southwesterly towns including Greenwich, Stamford, Darien, New Canaan and Ridgefield.

Aquarion says the goal is to improve drought resiliency.

Thought it was not a public hearing the public was allowed to share remarks on Aquarion‘s application.

According to Good Morning Wilton, Aquarion officials said they were at the meeting voluntarily as a show of “transparency and openness” to explain to town residents their objectives and goals.

Dan Lawrence, the utility’s director of engineering and planning, said that the company had put together a mitigation plan to address impacts the proposal might have on surrounding ecology and neighboring wells.

(Here is a summary of the permit application.)

Critics say Aquarion’s application lacks adequate detail on the possible impacts to water quality, wildlife habitats, as well as impacts to the river, area wetlands, and nearby private wells.

The Norwalk River Watershed Association (NRWA) has questioned whether the well is necessary, or whether drought resilience could be met through conservation, infrastructure repairs, and other improvements.

“Aquarion Water Company applied for a permit in early October 2018 to pump 1 million gallons per day from a previously unused well next to the Norwalk River in the Cannondale area of Wilton, reducing the flow of the river by up to 10% of the previous 7-day average for 25 years.” – statement on NRWA website

Mr. Lawrence, quoted in Good Morning Wilton, said on Tuesday night that having a local source in Wilton provides an opportunity for resiliency as an alternate source and gives the utility an opportunity to think about drought and the need for multiple sources.

The application uses research and study Aquarion conducted beginning in 1971, and conducted primarily in 1984 and 2013, to evaluate impacts of water withdrawal to the river and nearby wells and habitat.

Aquarion purchased 3 Cannon Road in Cannondale in 1981. The company installed the production well on the property in 1982 in order to provide an additional water supply for the system but the well has only been used for testing purposes.

After the severe drought in 2016, Aquarion has been reviewing additional water resources.

The well in Wilton is located near Aquarion’s water mains, and they want to bring it online.

It wasn’t long ago that the drought in 2016 impacted all residents in Greenwich. At the time, the drought was so severe that Aquarion ran temporary, emergency water mains along the Merritt Parkway to move water to Greenwich.

Good Morning Wilton quoted Mr. Lawrence saying the private wells in the surrounding 1,500 foot radius from Aquarion’s well draw water from well below the surface, in bedrock–except for one well at a nearby property on Danbury Road. He said the company is in conversation with the property owner about connecting them to the Aquarion system.

Though the meeting was not a formal hearing, members of the public were allowed to speak including Greenwich resident Elizabeth Dempsey.

Reached by email on Wednesday, Mrs. Dempsey said, “Unlike true drought issues as the western states are facing, this application is not about drinking water and taking showers. The vast majority of water issues in southwest Connecticut are in the summer where when millions of gallons every day are used for our yards and golf courses.”

“This usage, which in Greenwich is already being managed, does not justify a diversion that scientists say will severely degrade an important waterway,” Dempsey added.

Dempsey said the Norwalk River is enjoyed by seven towns in Connecticut and is vital for recreation and for wildlife, fishermen, and the shellfish industry. “All of those stakeholders in turn contribute to the health of Long Island Sound, our most vital asset,” she said.

Mikolajczak and Dempsey both said Greenwich does not need the water, and would be better served to dramatically increase efforts toward water conservation. 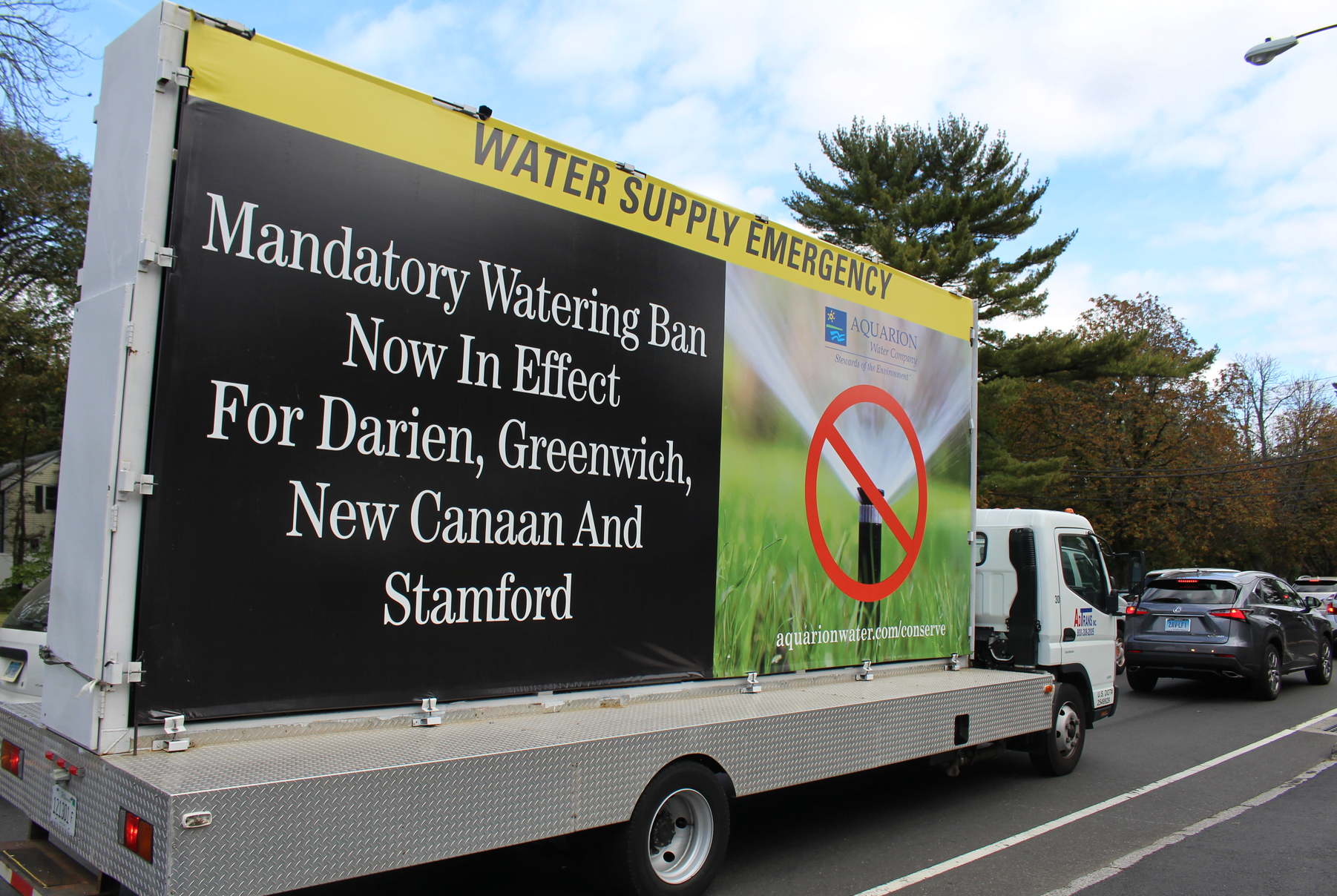 Aquarion raised awareness of the drought in 2016. Photo: Leslie Yager 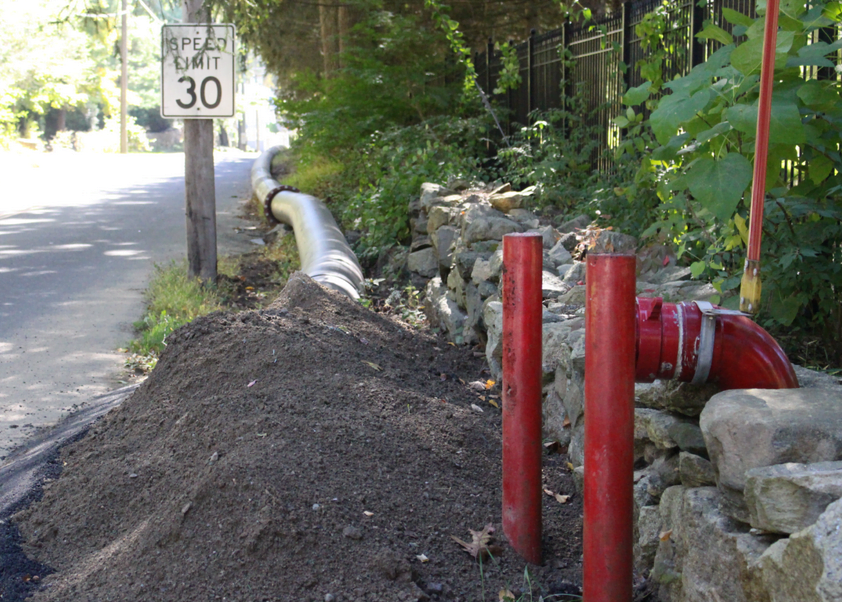 Back in October 2016 the Greenwich Board of Selectmen adopted restrictions on water use that applied to all residents including those on private wells, and not just those served by Aquarion.

By November 2016, Selectman Peter Tesei said, “Greenwich residents have significantly reduced demand on our water resources by complying with the outdoor water ban and I applaud their efforts.”

Compliance with sprinkler restrictions was voluntary, but there was some enforcement by Greenwich Police.

In addition to mandatory requirements sprinkler ban, residents were required to reduce water usage by 20%. And they did.  People decreasing their loads of laundry, showers and use of dishwashers.

On Tuesday night in Wilton, Dempsey shared a statement from Allison Walsh, a Greenwich RTM member who is an environmental lawyer:

This diversion application is made pursuant to CT Gen. Statutes 22a-368. It is governed by the CT Water Diversion Policy Act, which stated:

In recognition that the waters of Connecticut are a precious, finite and invaluable resource upon which there is an ever increasing demand for present, new and competing uses; and in further recognition that an adequate supply of water for domestic, agricultural, industrial and recreational use and for fish and wildlife is essential to the health, safety and welfare of the people of Connecticut, it is found and declared that diversion of the waters of the state shall be permitted only when such diversion is found to be necessary, is compatible with long-range water resource planning, proper management and use of the water resources of Connecticut and is consistent with Connecticut’s policy of protecting its citizens against harmful interstate diversions and that therefore the necessity and public interest for sections 22a-365 to 22a-378, inclusive, and the protection of the water resources of the state is declared a matter of legislative determination. (Connecticut General Statutes 22a-366 – Legislative findings)

The legislature’s intent to prevent diversions unless absolutely necessary AND compatible with long range stewardship of these resources is crystal clear. Aquarion’s requested diversion does not meet these applicable standards:  it is unnecessary and wholly inconsistent with proper management of our water resources and long range water resource planning. The DEEP must protect the Norwalk River and not permit the diversion being sought. As others have said, it is already a stressed resources that fails to meet standards even without the massive diversion of 1 million gallons of water each day. Southwest Fairfield county does not need more water; we need to use less water and use it better, recycling it. We are a resource hungry county and Eversource/Aquarion, as steward of our energy and water usage, should be promoting water conservation, use of gray water recycling systems, and less energy usage, rather than taking from natural resources that need to be preserved, not depleted.

Information on the application is available on the Aquarion website.