This week patrons of Something Natural Greenwich, behind Saks at 189 Greenwich Ave, are discovering big changes at the coffee bar, which is now named Coffee Luca.

Luca Morabito has taken over the coffee operation in a unique collaboration with the restaurant owners, Seth and Molly Hirschel.

The eatery, which opened two years ago, has become a popular destination for fresh baked bread, salads, sandwiches and juices. They also do a brisk delivery and catering business.

The the owners have a licensing agreement with Matt Fee whose iconic Nantucket sandwich shop dates back to the 1970s.

But, this week, said Seth, “We knew we could do a better job with the coffee than we were doing. And Luca has the passion, the experience and desire to serve the best product.”

“We had customers asking for more sophisticated options for coffee,” he added.

Meanwhile, Diane Roth, a commercial agent with Allied Properties, who had originally put the Hirschels in their space behind Saks, was helping Luca search for a spot for his own coffee shop.

Then, Roth recalled, “I said wait a second. Seth has a coffee station and there is more potential there.”

Roth called Seth to propose the collaboration. “He’s open-minded. He said it might work. Everything was in place. He had the coffee pots already.”

And, Roth said, “It’s nice to see artisan businesses opening up in the community instead of just national brands.”

“We are symbiotic,” Seth said. “He’s serving the coffee and breakfast crowd. Our mainstay is lunch, deliveries and catering. He is supplementing our business, and we’re helping drive traffic to each other and optimizing the space. It’s a win-win.”

Luca, who many patrons recognize from a previous position at a roastery, said he enjoys sharing his passion for coffee with customers who ask about the beans, their origins, and the different roasts.

“We give all our beans the right time to breath after being roasted,” he explained in his Italian accent. “We don’t roast and serve right away. We give time to release the flavor.” 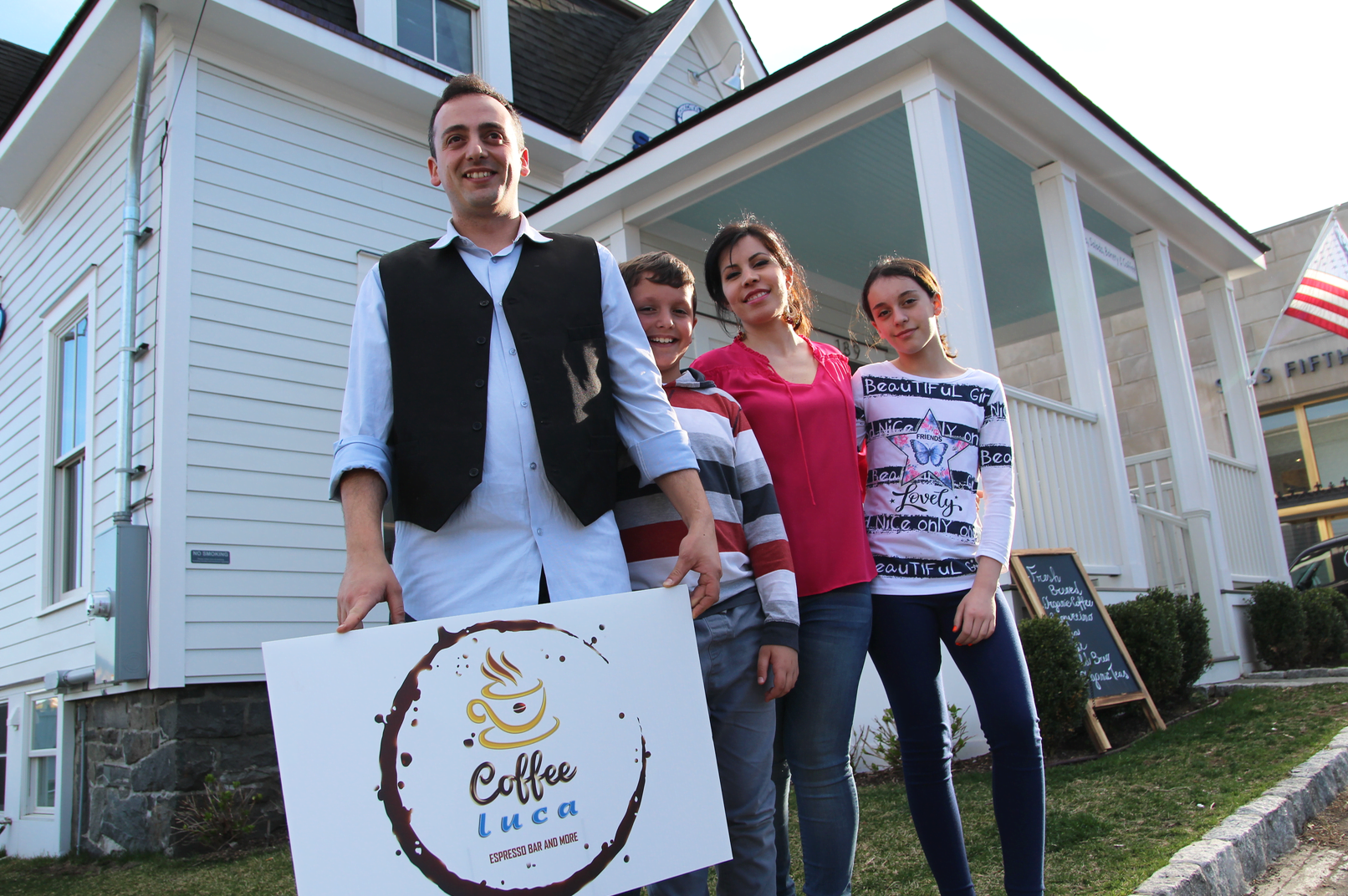 Luca and Federica Morabito with children Christian and Marisol outside Something Natural Greenwich. Photo: Leslie Yager

Luca, whose wife Federica is a US citizen, said the family moved from Calabria in south Italy to Greenwich in 2014. Federica, who has extended family here said that she, Luca and their children learned to speak English here in Greenwich.

“The Greenwich people are our teachers,” Luca said.

Christian Morabito, a 4th grader at Hamilton Avenue School who speaks fluent English, said he was an ESL student for three years. The couple also have a baby Leonardo, 15 months, and daughter Marisol, a 6th grader at Western Middle School.

“When I met Federica 20 years ago, I started to work in a restaurant with her uncle. Then I attended hospitality school in Italy,” Luca recalled. From there he worked in downtown Milan in the coffee business, and in 2009 he, Federica and her family moved to run a restaurant in Calabria on the beach. In 2013 they took on a pizzeria in Calabria.

Still, the American Dream beckoned them, and they followed the footsteps of Federica’s relatives, who were already here.

Luca, who has a business partner named Lukas, who specializes in marketing, graphic design and social media, said he is typically up and at work well before 6am.

As he shared photos of the sun rising over Something Natural, he described his earliest experiences with coffee in Calabria in the 1970s and 80s. 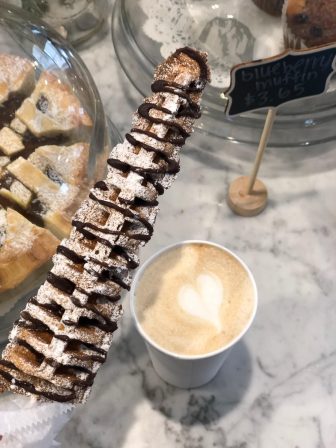 A waffle stick and Cappuccino at Coffee Luca, which is located within Something Natural Greenwich.

“The beans would get sent to the nonna – the grandmother – for the family and they would still be green. She would roast them in a big pan.”

“They are custom roasts,” Luca explained, adding that he works with a nearby roaster. “I give them my recipe and they roast them and deliver.  Or I buy the original beans and blend them myself.”

“Coffee and biscotti are the most popular. People love it and they come back,” he said. “They dip the biscotti in the latte or cappuccino.” 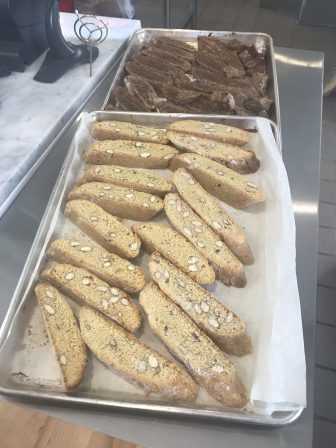 Also popular are original and Nutella cannolis, and the waffle sticks.

Luca said he just added individual tiramisu servings in small glass jars to his offerings, and plans to add bread pudding this week.

Other options include muffins, egg and cheese croissants, and egg white frittatas. Pies are also a hit and this week his pie with organic fig preserve sold out fast.

Patrons are also enjoying Luca’s personalized oatmeal mixes with organic and gluten free oatmeal packaged inside mason jars that can be returned and refilled. Customers control the toppings and have options including raisins, nuts, marshmallow, chocolate chips, peanut butter and fresh or dried fruits.

Coffee Luca and Something Natural Greenwich are both eco-sustainable and environment-friendly. Straws are made of paper. What looks like plastic cups are actually fabricated from corn. Containers are biodegradable.

Today the hours of Coffee Luca are 6:am to 4:00pm and Something Natural’s hours are 9:00am to 4:00pm, but Luca said he is considering extending his hours in the upcoming warmer months.

The restaurant which is the result of a total renovation of a historic carriage house and includes a bakery downstairs, affords patrons the choice of eating in the spacious, light filled restaurant, or, in the warmer months the option of sitting outside on the porch or at picnic tables in the side yard, in a nod to Something Natural in Nantucket.

Coffee Luca and Something Natural are located at 189 Greenwich Avenue (behind Saks).

Parking. There is a private parking in the back for quick pick up with a 15 minute maximum.

Check out our original features on Something Natural Greenwich:

Savoring Sammies and Salads at Something Natural in Greenwich 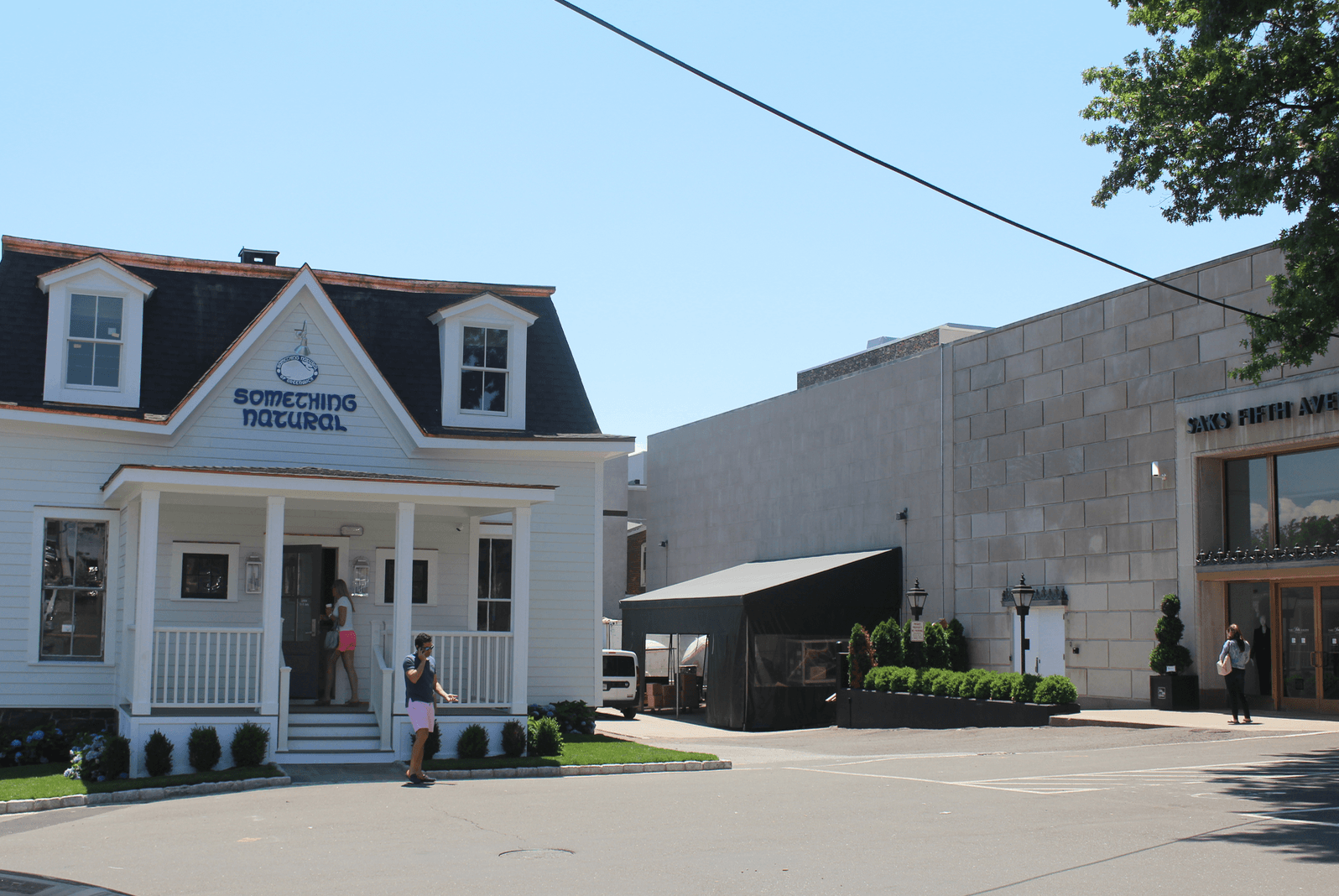