Cardinal Critics is a new feature series on Greenwich Free Press. Led by GHS senior Kai Sherwin, his hungry team will make their way through Greenwich restaurant, deli and pizza parlor menus – everything in between. 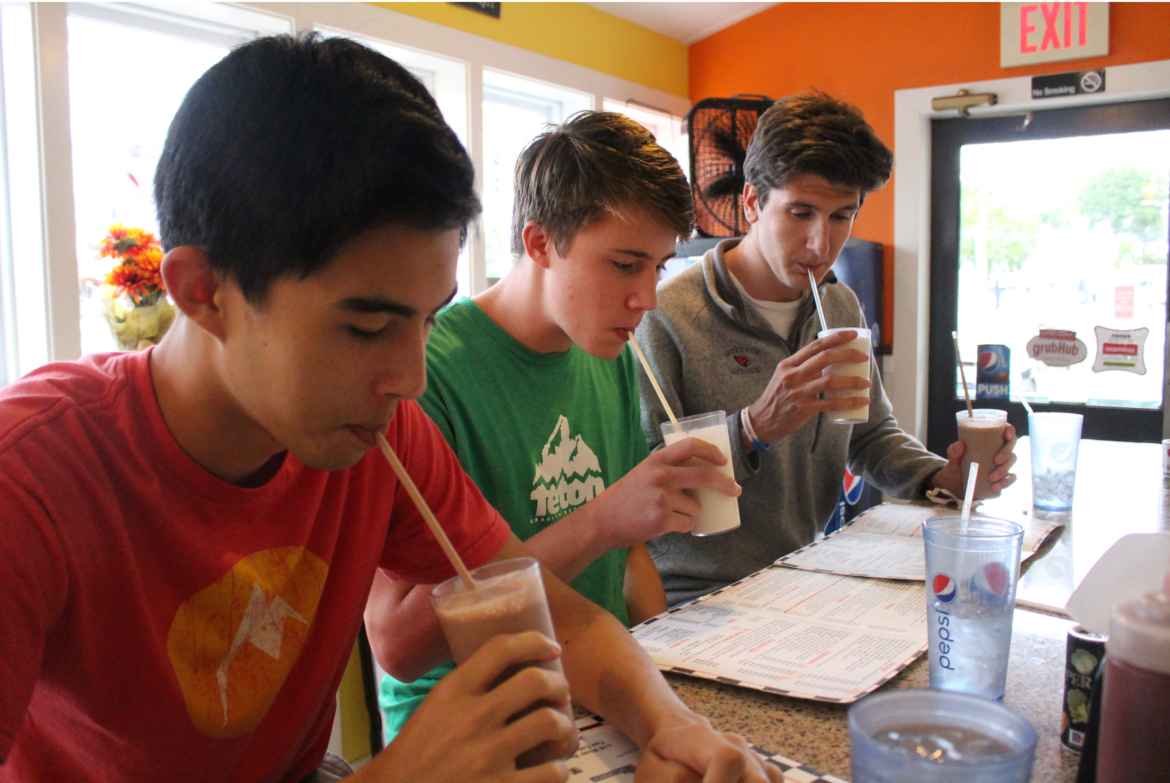 On Thursday Kai, along with Spencer Grabel and Drew Fuller, plunged into the menu at Joey B’s in Cos Cob.

Joey B’s owner Domenick Delfino started the trio off with milkshakes, which got three thumbs up.

Unlike other establishments that use a machine for their shakes, Joey B’s shakes are made with hand scooped ice cream and a little milk. The flavors are vanilla, chocolate, strawberry, cookies ‘n cream or mint chocolate chip.

After milkshakes, the critics moved on to hot dogs from the Lunch and Dinner menu.

The critics sampled the Cos Cob Dog (which is spicy, made with chili, cheese and onion), Texas Dog (bacon, cheese and BBQ sauce) and Chicago Dog (Kraut, mustard, relish, onion, tomato, pickles and cherry peppers) – each cut into thirds for easy sampling. All three met with smiles, but each had his favorite. 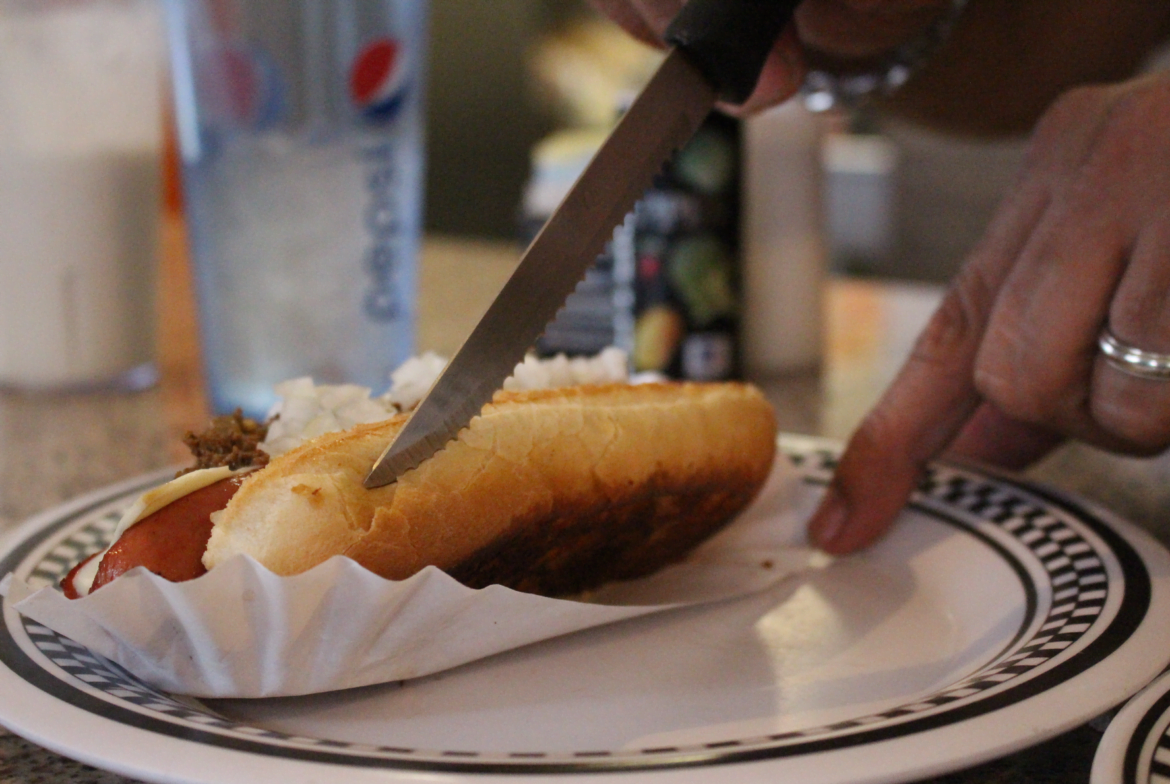 “What’s unique about our dogs is we split the tops of the buns and toast them so you get a nice crunch on the outside,” Delfino said.

From there, Mr. Delfino served up a perennial favorite among teens: The Weech.

Billed as a breakfast sandwich available all day, The Weech, which was Kai’s favorite, is available on a roll or a wedge, and features double egg, bacon, chili and Mac ‘N Cheese Bites, also known simply as “Mac Bites.” Click for breakfast menu.

“No one had Mac ‘N Cheese bites before us,” Mr. Delfino said. “Garden Catering and Chicken Joe’s put potato cones on the map in Greenwich, but we take claim to Mac Bites.” 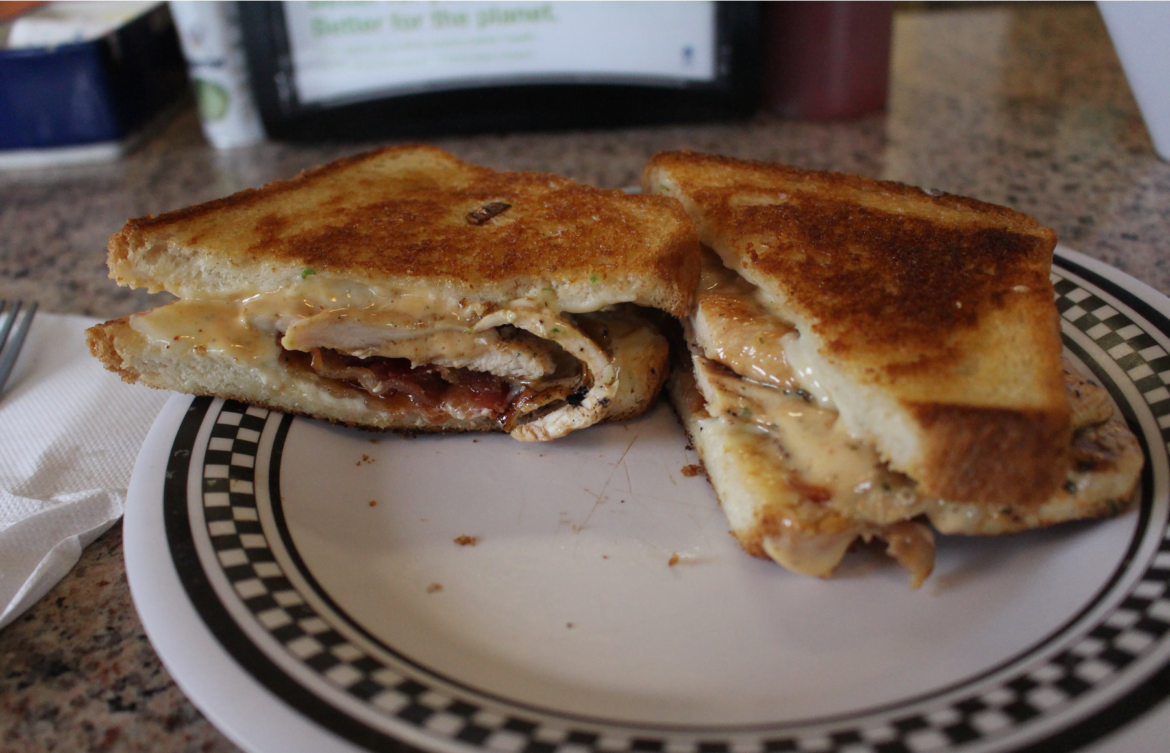 Next the Cardinal Critics devoured The Hacksaw, comprised of double egg, cheese, chili, and hash browns – on a choice of roll or wedge. From there, the trio moved on to sample  a grilled chicken melt, a Texas Burger, which Mr. Delfino said is a very popular menu item. The burger included cheddar cheese, bacon and BBQ sauce.

The boys next enjoyed a Philly Cheese Steak and a  Texas Burger, with cheddar cheese, bacon and BBQ sauce. “All our burgers are certified Angus and come on a potato bun. They’re fresh, never frozen,” Mr. Delfino said.

Joey B’s is a popular spot both families and people of all ages. Often the seats at the counter are all full and patrons chat with each other of keep to themselves.

Mr. Delfino said he does a brisk take-out business, and that because he has great Yelp ratings travelers looking for a place to eat, will get off I-95 and make their way to his restaurant.

“We have 68 reviews, and four-and-a-half stars  out of five,” Delfino said.

The menu features far more than hot dogs and hamburgers. In addition to the ever-popular milk shakes, there are tacos, melts, wraps, wedges and lighter fare, including eight salad options. There are also gluten-free items, more than a dozen choices of sides, and a full kids menu.

The critics found room for a BBQ Chicken Melt, which Delfino said he added to his menu during the panini craze. The melt was delicious and included BBQ chicken, bacon, cheese and chipotle on grilled white bread.

Hours:
Mondays 6am til 3pm
Tuesday to Friday 6am until 8 pm
Saturdays 7am til 4pm
Sundays 7am until 2pm 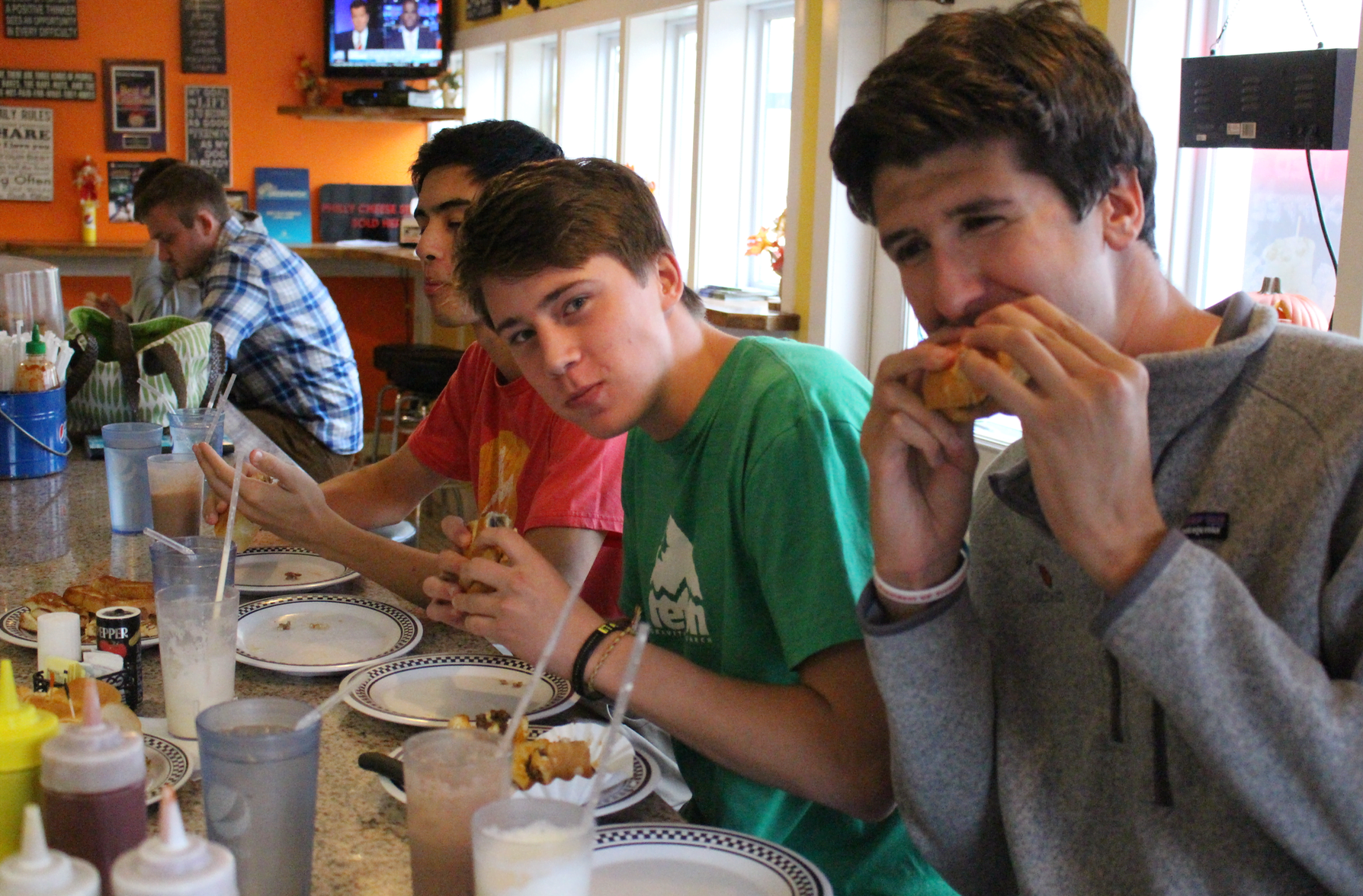 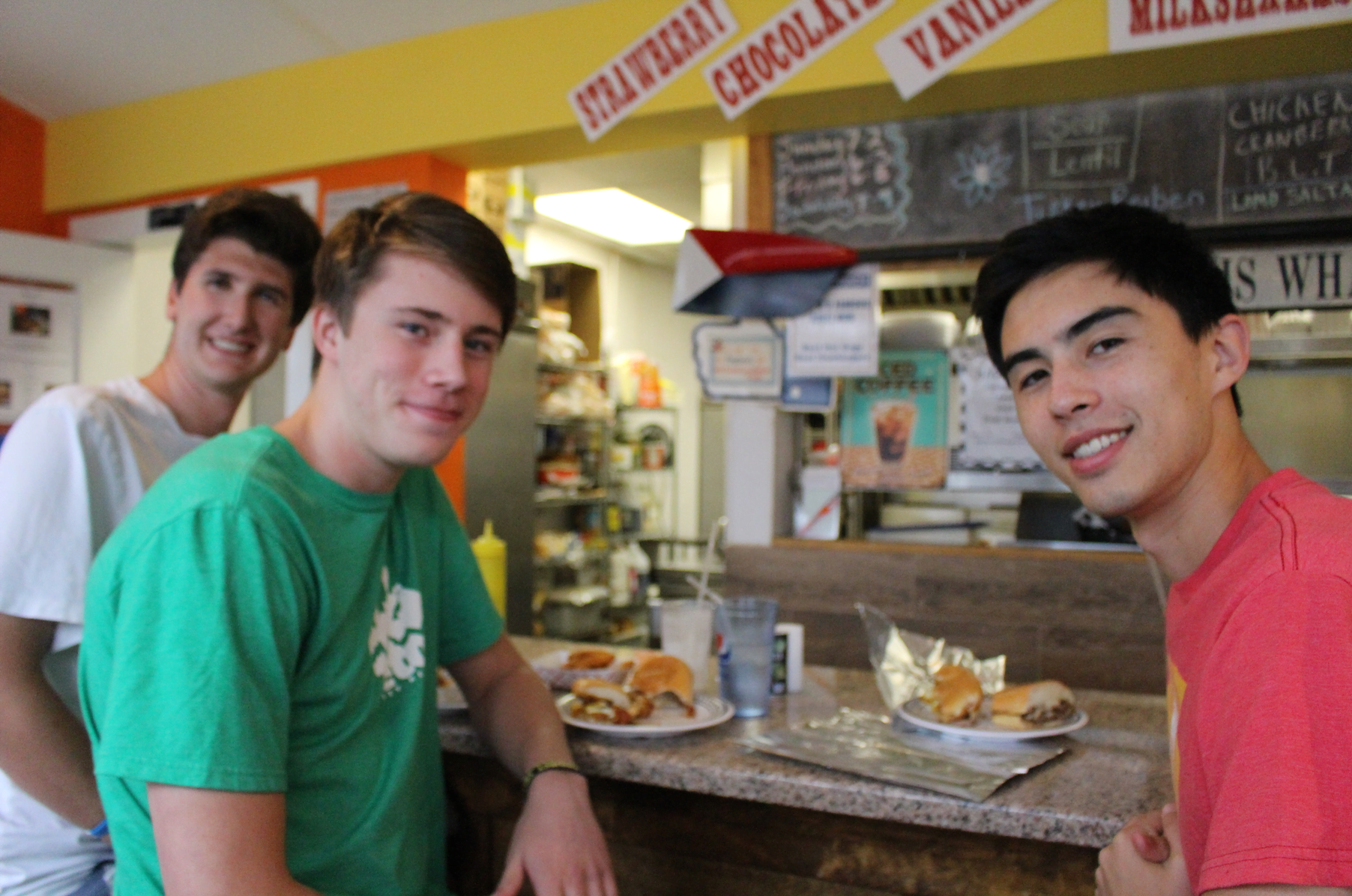 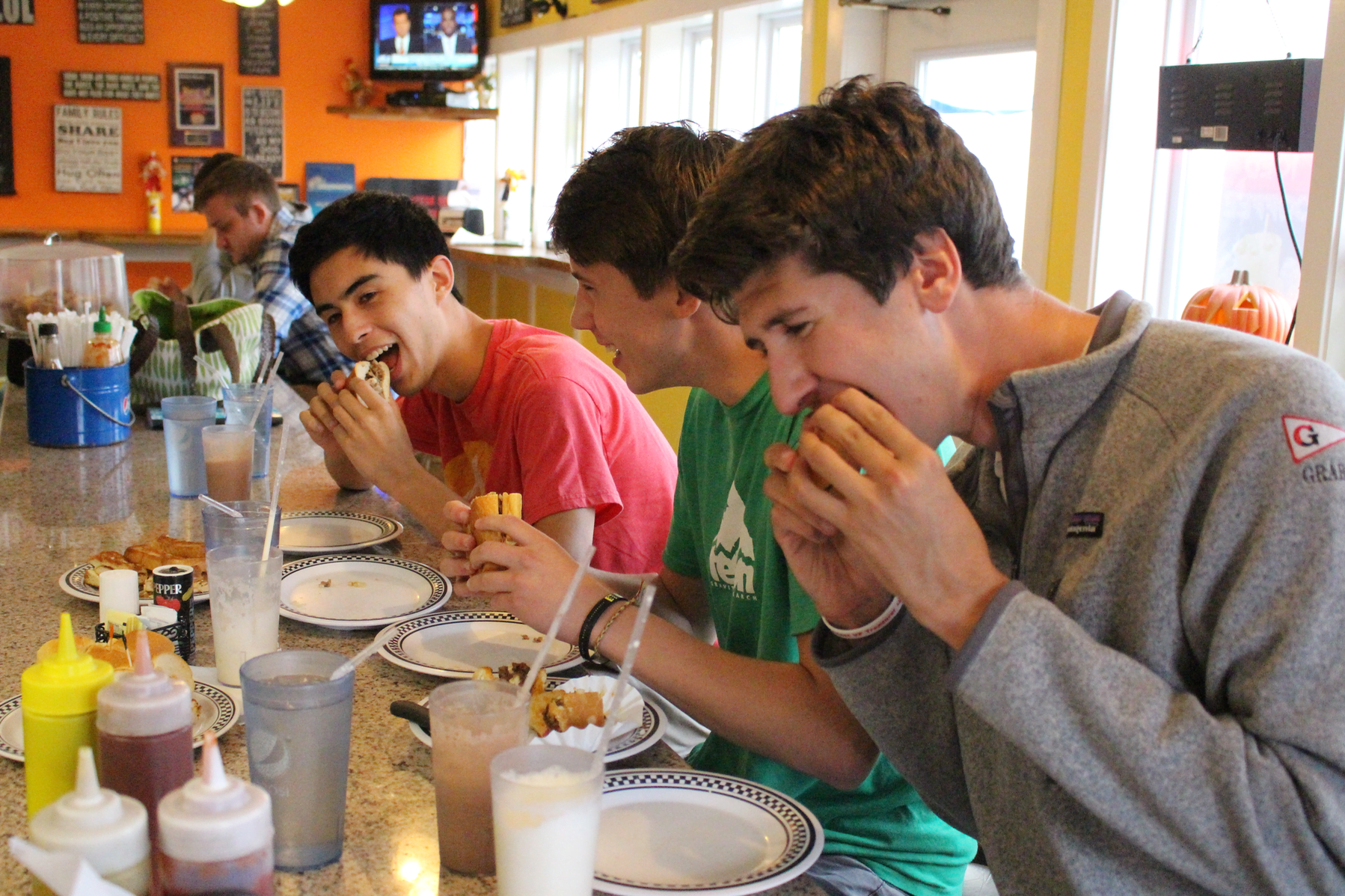