Letter to the editor submitted by Sarah Darer Littman

A week and a half after the mass shootings in Dayton and El Paso, I Tweeted this:

Lo, and behold: On Sunday I woke up to a letter to the editor from Jack Kriskey, campaign chairman of FredforFirst, stating that he “knew it would not be a normal local Greenwich election this year when the first question from the media for Rep. Fred Camillo after his Republican Party endorsement for first selectman was will he vote for President Trump.”

After a tellingly Trumpian aside that Mr. Camillo and Mr. Kriskey “concluded we would not be getting a fair shake from the media in this race”, Kriskey loftily assured readers that “rather than engage in rhetoric that is meant to confuse, divide and distract the public” —well, except for that dig at the’ fake news’ apparently — “we will stay on our message and focus on issues facing Greenwich residents.”

Mr. Kriskey rightly states that “Vision, leadership and community are what really matter in this year’s race”. However, his letter seems to assume that the concerns of all Greenwich residents stop at the town’s borders.

“How many actually evil people does it take to accomplish a genocide and reduce much of a continent to ash? Only a handful, it seems, but that handful requires the passive assistance of many, many other people who glance out of the windows of their secure homes and see a cloudless sky. It’s easy enough for most of us to distance ourselves from attitudes of virulent racism, but what about from carelessness, casual snobbery – either social or intellectual – inattentiveness? Rezzori reminds us painfully that the great and malignant hazard of privilege is obtuseness.” …

…”Yes, we wonder, what does it take to be a “decent person”? Maybe the most significant component is luck – the good luck to be born into a place and moment that inflicts minimal cruelty and thus does not require from us the courage to discern and resist its tides.”

By implying that it is a “divisive political tactic” to look beyond the seemingly cloudless sky of Greenwich, Mr. Kriskey is urging us to engage in ‘the great and malignant hazard of privilege.’ He seems to assume that by focusing solely on this town, and the issues within its 47.6 square miles,  all of us will remain secure. This couldn’t be further from the truth.

Over three years ago, I wrote a piece for CTNewsJunkie, Confronting the Banality of Evil over coffee after having dared to have raised a question to our then 100% Republican state delegation about the hate rhetoric and retweeting of white supremacists being perpetrated by the man at the top of the Republican ticket. That man was then candidate, now president Donald Trump.

Since that April 2016 Coffee with Constituents,  the number of anti-Semitic incidents in our country has skyrocketed. Last year saw the murder of congregants at the Tree of Life synagogue in Pittsburgh. In April of this year, a white supremacist gunman attacked worshippers at a Chabad house in Poway, CA. We have a Chabad House right here in Greenwich—I know because I worshipped there for over a decade.

My current synagogue has had to spend additional funds on hardening security, and recently held several active shooter walk throughs in advance of the upcoming High Holy Days. After attending, I realized that as a choir member, my chance of escaping alive in the event of a mass shooting is slim.

USA Today analyzed the rhetoric of sixty-four rallies Trump has held since 2017.

The domestic terrorists at both the Poway Chabad House and Tree of Life synagogue quoted Trumpian rhetoric, as did the perpetrator in El Paso, and a want to be synagogue shooter from Las Vegas arrested only last week.

Mr. Kriskey wants us to believe that the mere act of wanting a discussion of the impact of the current president’s rhetoric, let alone his polices, is an “attempt by opposition leaders” to “bully and goad us into jumping into the mud with them.” Meanwhile, he and Mr. Camillo appear to be wilfully turning a blind eye to the daily stream of invective coming from the White House, which has had a very real impact on the very people that Mr. Camillo purports to represent.

I feel particularly strongly about this because every single time I have privately asked Mr. Camillo, my State Rep, to speak up against hate rhetoric, he has declined. He has not, as Mr. Kriskey tries to claim: “represent(ed) and protect(ed) all people in Greenwich no matter who they are, what they look like, what party they support, or where they come from.” 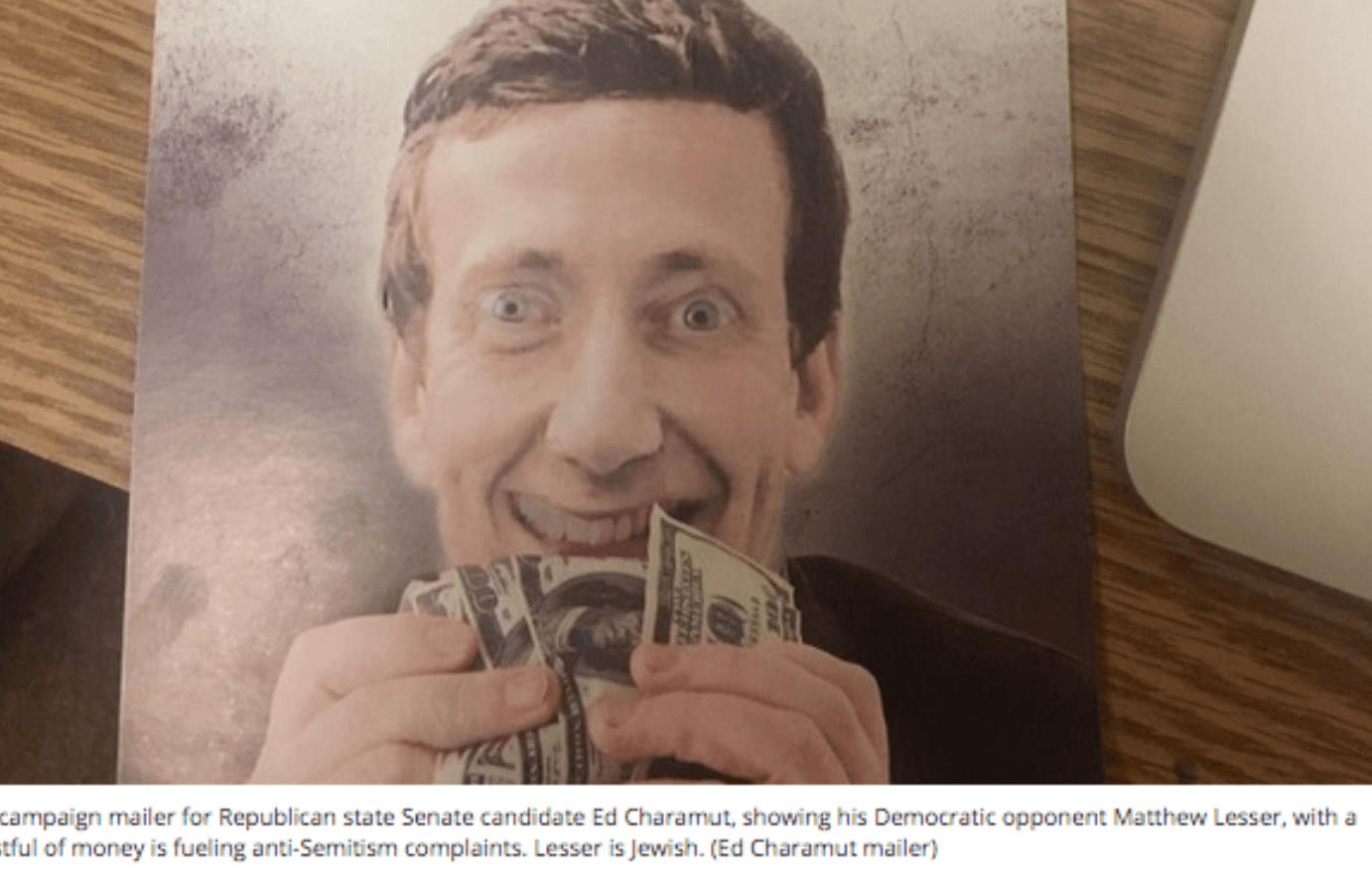 Here’s just one example: On October 30th, 2018, I wrote to Mr. Camillo not just asking, but begging him to speak out about the egregiously anti-Semitic mailer sent out by Ed Charamut, the Republican running against Rep Matt Lesser for CT State Senate. I was appalled that State GOP chair JR Romano dismissed criticism of the mailer, and claimed it was coming only from Democrats. As a former Republican, whose father was a life-long Republican, I was beside myself that the head of the CT party could stoop so low – especially given that this happened days after the murder of Jews while observing Sabbath prayer in a Pittsburgh synagogue.

Yet Mr. Camillo wrote back saying: “I agree with JR as I honestly would not have thought it was anti-Semitic, just stupid and a waste of money. I see Anti-Semitism in many places ( and other forms of bigotry directed at other groups ), but not here. When I wrote back with examples of Nazi era propaganda bearing a strong resemblance to the Lesser mailer, Mr. Camillo’s response was:

Given this response, and so many others from Mr. Camillo like it, I can’t help wondering to whom Mr. Kriskey speaks when he writes: “Having been born and raised here, Fred has a great respect for our values.” Is Mr. Kriskey not so subtly harkening back to the town’s less diverse past?

My children might not have been born here, but they were raised here for most of their lives. I wasn’t born here, but I’ve lived here for over twenty years, and would argue that my service to the community speaks for what I understand to be “Greenwich values.”

“Vision, Leadership, and community” are indeed what matter in this year’s race. But first it’s important that we discuss what it means to be a leader, how we define community, and what kind of vision we want for our town and our nation going forward.