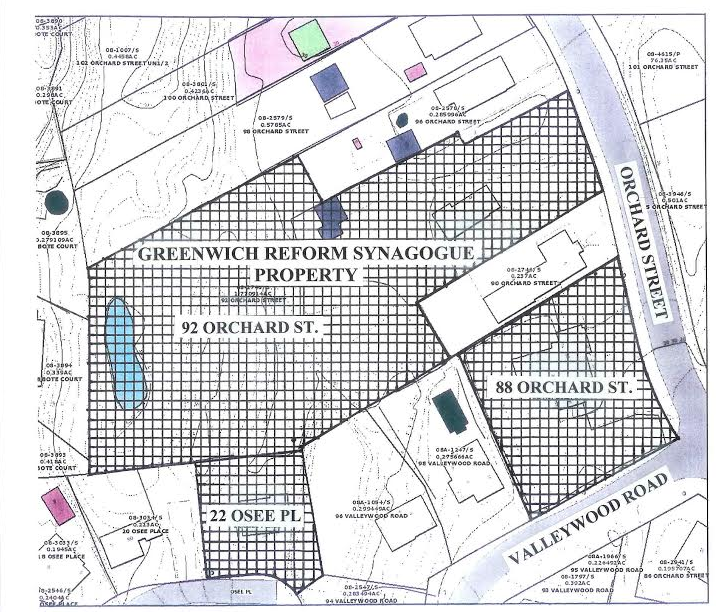 In the Factual Allegations section of the Greenwich Reform Synagogue (GRS) lawsuit vs. the Town of Greenwich Planning & Zoning Board of Appeals (ZBA) it is stated:

“The Congregation does not have its own place of worship, but rather conducts all of its religious services, meetings, classes and ceremonies in an ever-changing array of rented Christian churches, schools and its members’ homes.” …..”rituals cannot be observed”…..”difficulty in renting adequate space and scheduling its many activities”…”the lack of a gathering place for the congregation”…”the inability to install and maintain various ritual objects”….”the lack of a synagogue also substantially burdens the Congregation both financially and logistically as it must schedule, set up and then take down materials necessary for its religious worship”…..”Because the Congregation meets in spaces rented from other religious organizations, it is often surrounded by symbols of those religions and must, for example, cover crucifixes and other religious symbols of a non-Jewish nature”….”Rental and lease arrangements create substantial uncertainty as to the ability of the Congregation to engage in religious exercise”…..”Religious education classes cannot be properly conducted, as the ones that can be provided must occur in rented spaces where the proper materials are unavailable and on going projects cannot be carried out”…..The Congregation has no location for Saturday morning Shabbat services, as many churches use their facilities on Saturdays, making them unavailable for rental”…..”Important High Holy Day services have to be held in various temporary rented locations”…….The Congregation’s need to rent office space, space for services, classroom space and the like has also caused sever financial strain, causing the Congregation to run a five-figure monthly deficit”….

When GRS sold their synagogue facility at 257 Stanwich Rd to The Stanwich School they had to find and rent facilities to practice their religion until they had a replacement synagogue. It appears that instead of a long term contract to rent or lease a facility they chose to do a hit or miss rental of individual facilities.

GRS should have realized that the process for approval by the various town agencies, Inland Wetland and Watercourses Agency, Planning and Zoning Commission, Zoning Board of Appeals and Architectural Review Committee, would take a long unpredictable amount of time.

The process so far has taken over 21 months from the time GRS applied for the lot line revision with the Planning and Zoning Commission on Oct. 3, 2012 to today with no end in site because of the GRS lawsuit.

In addition to the many months needed to secure the agency approvals GRS submitted a 6 phase construction plan which indicates that it will take 14 months to build their new synagogue. That is if the project is completed on time.

Greenwich Reform Synagogue created their own hardship of having to move around various locations because they did not foresee the need for a long term temporary facility.

If you would like a copy of the GRS Lawsuit send an email to [email protected] Ask for either a pdf file or a word file and I will reply with a copy.