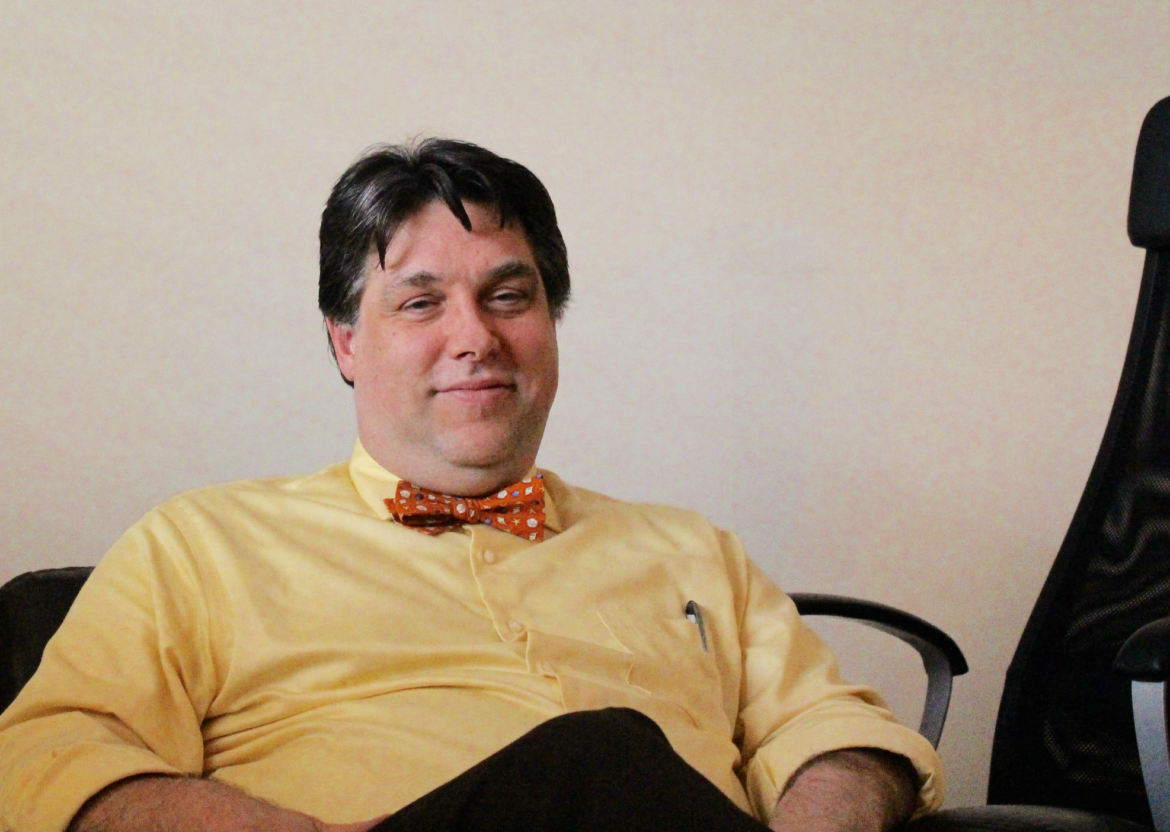 “Her path led to children,” Dr. Rigling said. “Mine led to adults.”

Dr. Rigling, now a Clinical Psychologist licensed by the state of Connecticut, grew a thriving private practice in Middletown over the course of many years, but has decided to wind that down in support of his wife’s job at Hamilton Ave School, and start anew here in Greenwich.

“We’re here because I’m 100 percent supportive of her taking on this challenge,” he said.

Describing his wife as a ‘natural born leader,’ he said it’s her mission to provide a great education to all the children. “She has a singular vision about the importance of learning and development. Knowledge is the key to success and satisfaction.”

He said that when the Hamilton Avenue School principal opening appeared on the radar as an achievement gap challenge, the Riglings quickly became familiar in all things Greenwich.

Originally from Guilford, Dr. Rigling describes Greenwich as a microcosm of the US.  “It has the reputation of being a very wealthy town, but it has the full range of socio-economic groups – from newly arrived cultures and very ‘origination’ cultures, yet it doesn’t create strife.”

Last summer, he settled into an office on Melrose Ave, where Chickahominy’s multi-family houses intersect with office buildings and car dealerships, both Riglings have become part of the rich fabric that makes our town unique. Dr. Rigling has explored the neighborhood and even found a shortcut to Hamilton Ave School to meet his wife for occasional lunch breaks.

The couple has a 24-year-old daughter who is getting a masters and will soon be moving from Toronto to North Carolina.  “She’s interested in copyright law,” Dr. Rigling said.

Dr. Rigling, who is taking new patients and accepts Connecticut’s Husky Healthcare as well as other insurance, said his work is a mix of clinical and consulting.

On the clinical side of his practice, he works with individuals, groups, and couples, though he said that is not limited to married couples.

He also works with individuals and families where there is substance abuse and dependence.  “It’s a family illness,” he said. “It effects everyone because families are systems. Substance abuse has a profound effect on a family.”

For many years, earlier in his career, Rigling worked with patients referred by DCF and the Courts, connecting them to addiction treatment services, and running substance abuse treatment clinics.  “If you get involved with DCF because of addiction for people who don’t have access to treatment or know how to get it, DCF and the courts offered and encouraged people moving through the court system to seek and get substance abuse treatment.”

We asked Dr. Rigling, who happens also to be President-Elect of the Connecticut Psychological Association, which he prefers – Client or Patient?

“I used to be uncomfortable saying ‘patient,'” he replied. “But, I provide treatment. I don’t give advice. I treat people’s health problems.” Rigling’s patients find their way to him in a variety ways. “Sometimes they search Psychology Today, or are referred via their insurance panel – or by word of mouth.”

“It’s important that people who see me view their problems are health problems. It de-stigmatizes the situation,” he said. “If you have depression, you have a brain disorder and that manifests in behavior and emotion and requires treatment.”

Dr. Rigling also does consulting with non-profits and small businesses, and has a knack for helping for example family businesses understand their business culture. Specifically, he helps companies executives develop leadership, working with them in coaching mode. “The millennial model was to lay people off,” he said. “That’s changing. With hyper performing organizations, interest in human capital is growing,” he said.

Referring to “bluffing” as a second job, he said, “If you aren’t learning and sharing what you’re learning, up and down the chain, it’s not productive.”

Rigling is fascinated by corporate culture – specifically the make-up of hyper-performing companies.  He has done training with the authors of An Everyone Culture, who studied unusual successes or “hyper-performing” companies.

He said the authors and their team interviewed companies that were performing really well and used three of them as examples in the book. One of them is Bridgewater Hedge Fund.  “Hyper performing companies emphasize a culture of sharing what you’re learning up and down the chain. If you’re trying to hide from other people what you don’t know, then you’re not performing,” he said. “It’s a missed learning opportunity.”