By Nicola Traynor and Allie Primak

Greenwich’s staple Bruce Museum is fortunate to welcome Dr. Daniel Ksepka as its new science curator.  A self-described “penguin enthusiast” with a passion for science and paleontology, Dr. Ksepka sat down with Free Press interns Nicola Traynor and Allie Primak to discuss discoveries, birds, excavations, and all the great things he has planned for our local museum.

Ksepka described wanting to become a paleontologist at the age of 4, saying, “I guess a lot of four-year-olds want to do that, but I never really changed my mind in any way.”

In college he earned a geology degree and went on to achieve a PhD in vertebrate paleontology at the American Museum of Natural History (within a program at Columbia University). “Being in the [Natural History] Museum made me realize that the place for me was a museum career. So when the Bruce Museum was looking for a curator,  I was very interested in this job. It’s a lovely museum… great exhibitions, very good people behind the scenes too–we have a great team and I think it was a great fit for me, so I was very happy when they decided to hire me.”

When asked about the most exciting part of his job, Dr. Ksepka said, “I’ve always loved birds and so I worked on penguins for my dissertation.  I think one of the greatest experiences is being the first person to see a fossil, like a new species that wasn’t known to exist before and that kind of moment of discovery.  I think this is really, really rewarding.” Ksepka recently reaped the rewards of this experience, marked by his discovery of the “world’s largest bird.”

The species Pelagornis sandersi, now extinct, is believed to have had a wingspan of 6.4 meters, and belonged to the also extinct Pelagornithidae group.  These birds are believed to have vanished approximately 3 million years ago.

He explained, “The group of Pelagornithids, the family, lived from 55 all the way up to 3 billion years ago.  So that’s 52 million years where they’re doing just fine, and then they just vanish. It’s really hard to come up with one reason [for their extinction], so I don’t know. It wasn’t us though, it was before humans appeared.”  Though this particular species was native to North America, the larger family could be found pretty much everywhere.  Samples of related species have been found on every continent, including Antarctica.

He explained that the significant fossil that led to the discovery was found in 1983 in South Carolina, prior to his involvement.  Then, when he was working at the National Evolutionary Synthesis Center, he was interested in local fossil deposits and so he got the opportunity to study the Pelagornis fossil. “It was really spectacular,” he recalled. “6.4 meter wingspan, fake teeth. The teeth actually are not made of enamel, they are part of the jaw bone themselves so we call them pseudoteeth, because they’re spikes but they’re not normal socketed teeth, like our own or like reptiles.”  It was these fossilized pseudoteeth that played a crucial role in distinguishing the Pelagornis sandersi as its own species.

It was due to the fragility in nature of the pseudoteeth and of bird bones in general, which are characteristically hollow and frail, that made obtaining a fossil in such good condition incredibly rare.  “Usually we find a bone here, or a piece of a bone there, but having the skull and the wing and the leg was really useful because we could kind of put the whole thing together,” Dr. Ksepka elaborated.

He also explained the changing nature of paleontology in relation to computer programming.  “It’s definitely one of the most useful things you can know how to do.  So a lot of modern paleontology used different programs and a lot of them are kind of custom built, so if you know how to script in R or java or something like that, it’s a huge asset; and one that I don’t have,” he explained with a laugh.  “I’m able to use a lot of software but there are people out there who can actually write software to solve specific problems.”

“It’s almost an interesting juxtaposition, when technology is so futuristic and fossils are so archaic…  People think of us as like these dusty guys with beards stirring our coffee with our thumb and like, smelling the fossil on the air, and it’s not quite like that anymore.” 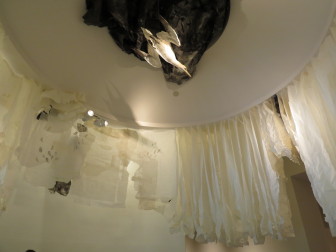 A bird over the entrance of Bruce Museum. Credit: Allie Primak

When asked about his future plans (and dreams), Kspeka had a lot to say. He hopes to bring a penguin exhibit to the Bruce Museum, as well as visit Antarctica one day. “Some really cool stuff has been discovered there in the past few years, and there’s a lot of penguins as you might expect,” he joked. He also recalled seeing two-hundred and eighty-seven little blue penguins all in one day when he visited New Zealand. Other places he has done field work in include China, Peru, and Africa.

And after realizing his recurring mentions of penguins, Kspeka confessed, “I started out being interested, like everyone else, in dinosaurs. But in the American Museum of Natural History there were more than 100 penguin fossils, and I realized [if I worked on birds] I could have them all to myself [laughs]. I got really into flightless birds… I think they’re so weird and I really like seeing them in zoos. It’s a treat to be able to study something and to see it alive too. So I think it was, maybe you could say, the personality of the birds pushed me towards it, but also it helps that [studying birds] gives me the opportunity to work on really great material.”

Dr. Ksepka currently lives with his wife in Stratford as she finishes grad school, and is enthusiastic about the impact he hopes to make with his job at the Bruce Museum. “It gives me the opportunity to share science with people… We work really hard to come up with exciting topics for exhibits and sometimes the logistics of getting everything ready at the right time can be difficult. There’s a lot of planning that goes into it… I think sometimes it’s a little bit of a logistics puzzle making all the paths go to the same point. But it’s really rewarding when it’s all done.”

You can also visit their website to learn more about current exhibits and Dr. Kspeka’s work.