The Essence Awards were created to pay homage to some of the district’s most valued volunteers.

“No one who is present here today does their PTA work for selfish reasons or bragging rights,” said Essence Award Committee co-chair Kara Mendelsohn, who said recipients were chosen for their  selflessness, ongoing involvement, and willingness to be team members and motivators. The recipients also exemplify the PTA values of collaboration, commitment, respect and integrity. 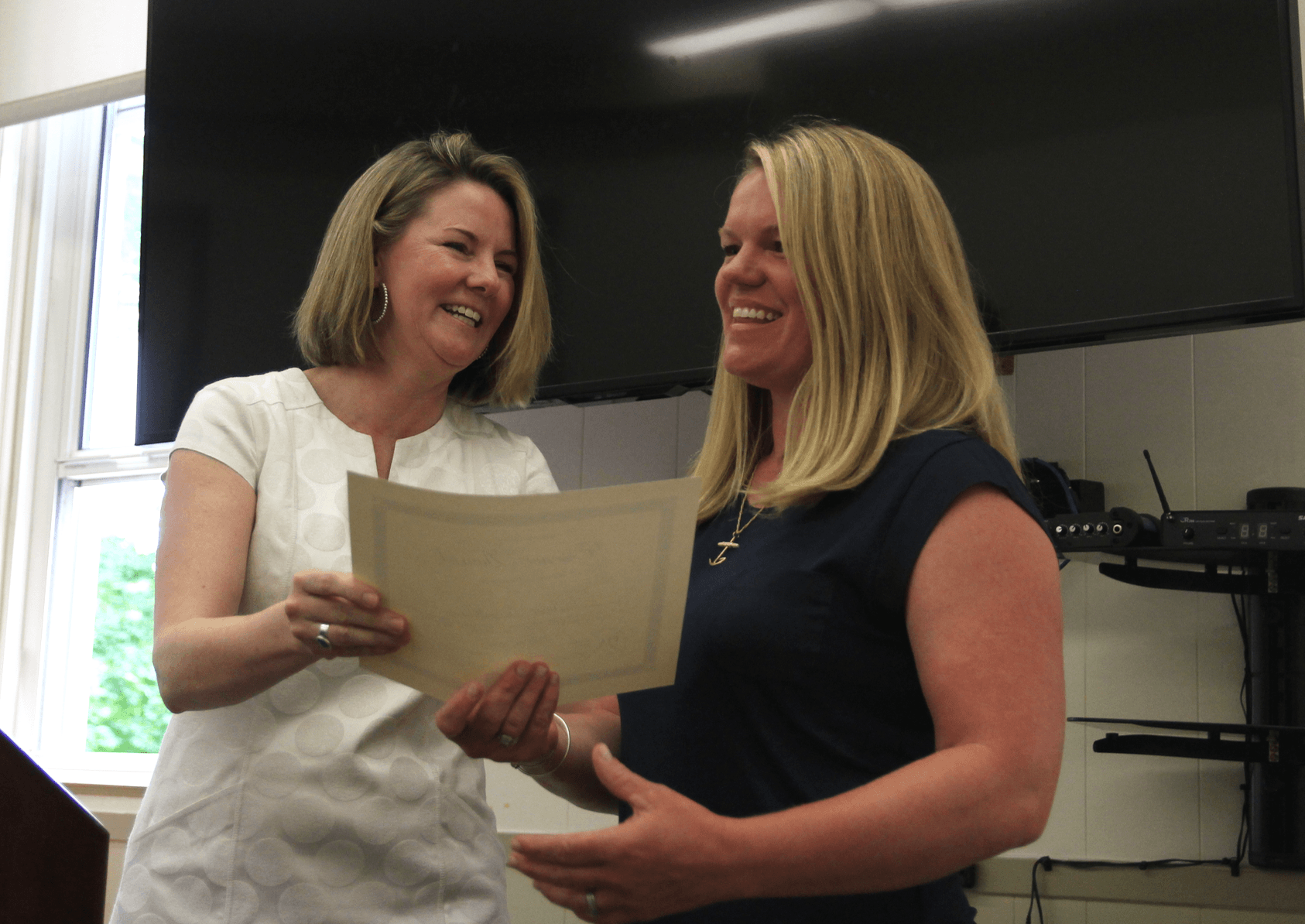 Jessie Bennett who is currently serving as Julian Curtiss School PTA co-President was nominated by Valerie Rimmer and Janine Scharff who said Jessie always goes above and beyond, is full of great ideas and energy, and is an effective motivator who rolls up her sleeves to help at school events.

Jessie, a teacher by profession, wants all the children to be happy and successful in and out of school.

She recognizes the wide diversity of JC students and makes sure programs and events are of interest and accessible to everyone. 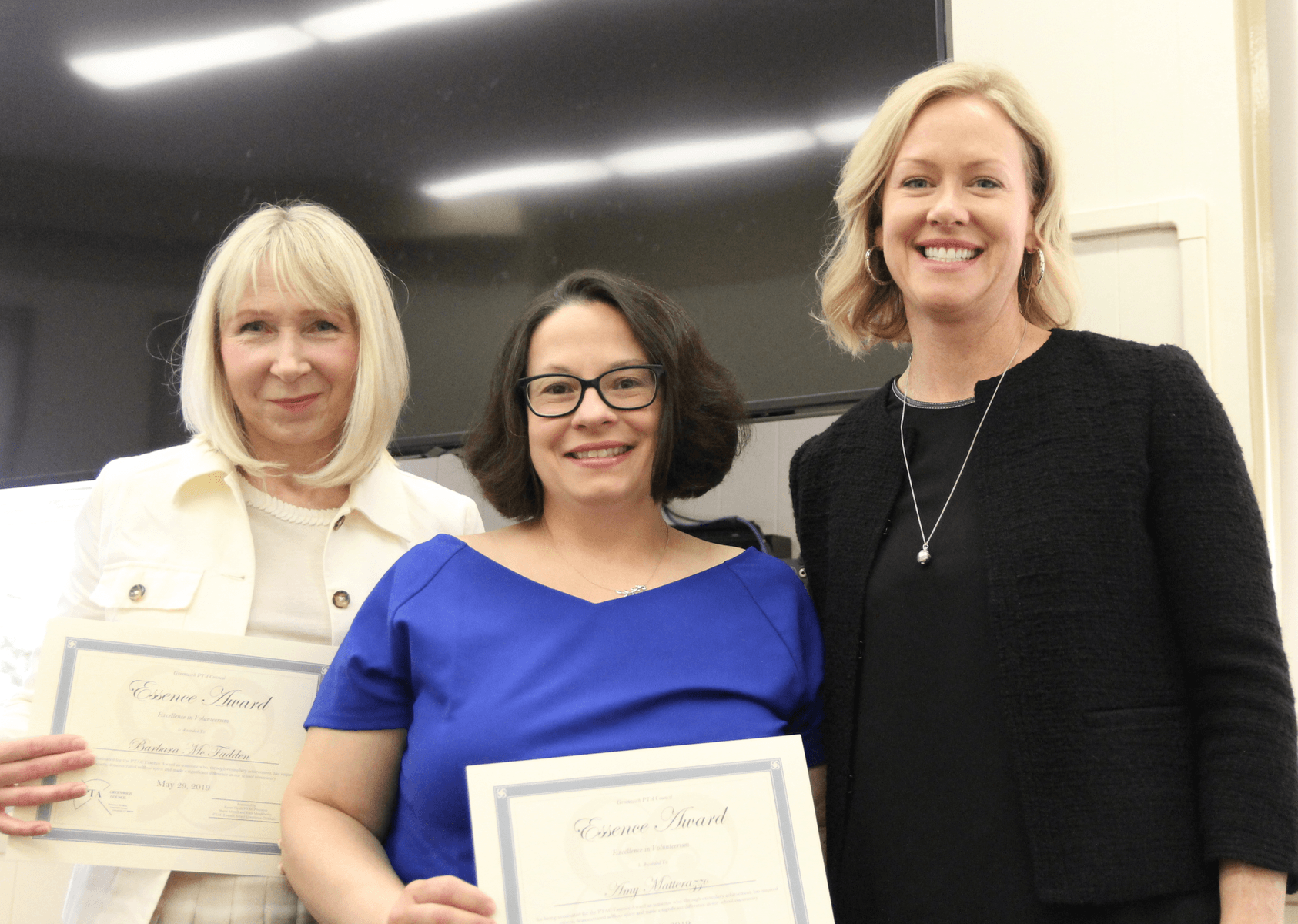 As a team from Hamilton Avenue School Barbara McFadden and Amy Matterazzo were presented their Essence Award from committee member Julie Dozier. May 29, 2019 Photo: Leslie Yager

Barbara McFadden and Amy Matterazzo were nominated by Catherine Fiorito-Brunetti. Amy and Barbara have worked together as an amazing team for the past ten years, since their children were in pre-school together.

They became class parents, which they have done throughout their children’s time at Hamilton Avenue School.

Amy is an excellent photographer who has captured amazing photos of the children at the school’s events.

Barbara’s passion for health and the environment made her a good choice for the PTAC Health & Wellness committee and Tools for Schools.

They joined Green Schools together and have been Yearbook co-chairs for the past five years, working until the wee hours until every 5th grader has a baby picture and is displayed multiple times. 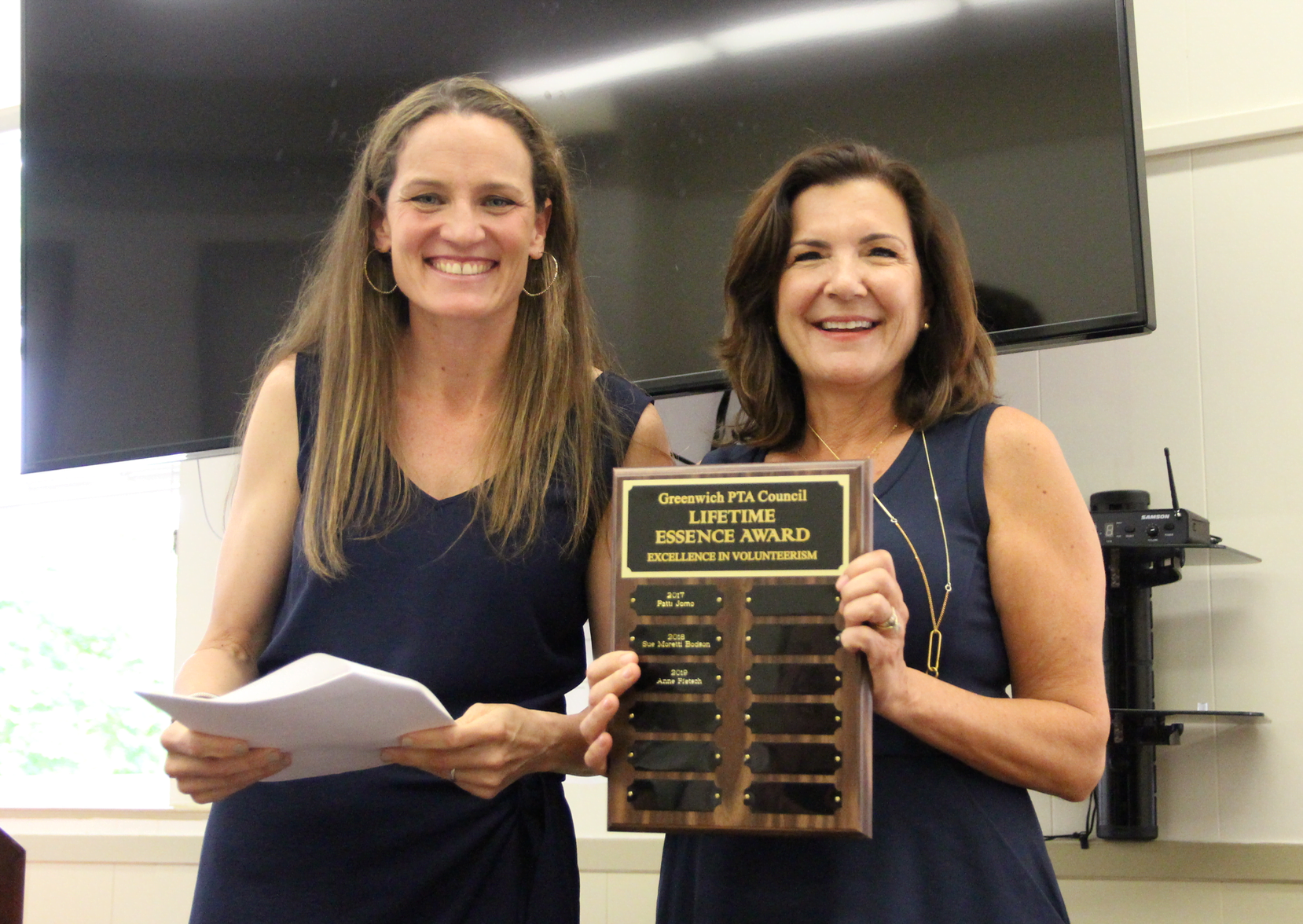 Anne Pfetsch received the 2019 PTA Council Essence Lifetime Award for Excellence in Volunteerism. She was nominated by the GHS PTA.

This is the third year PTAC has honored someone for a “lifetime” of volunteerism. The previous two honorees were Patti Jomo and Sue Moretti Bodson.

In their nomination the GHS PTA wrote, “Anne has an incredibly calm presence paired with an effective leadership style. She handles any difficult situation with a thoughtful, intelligent and fair response.” 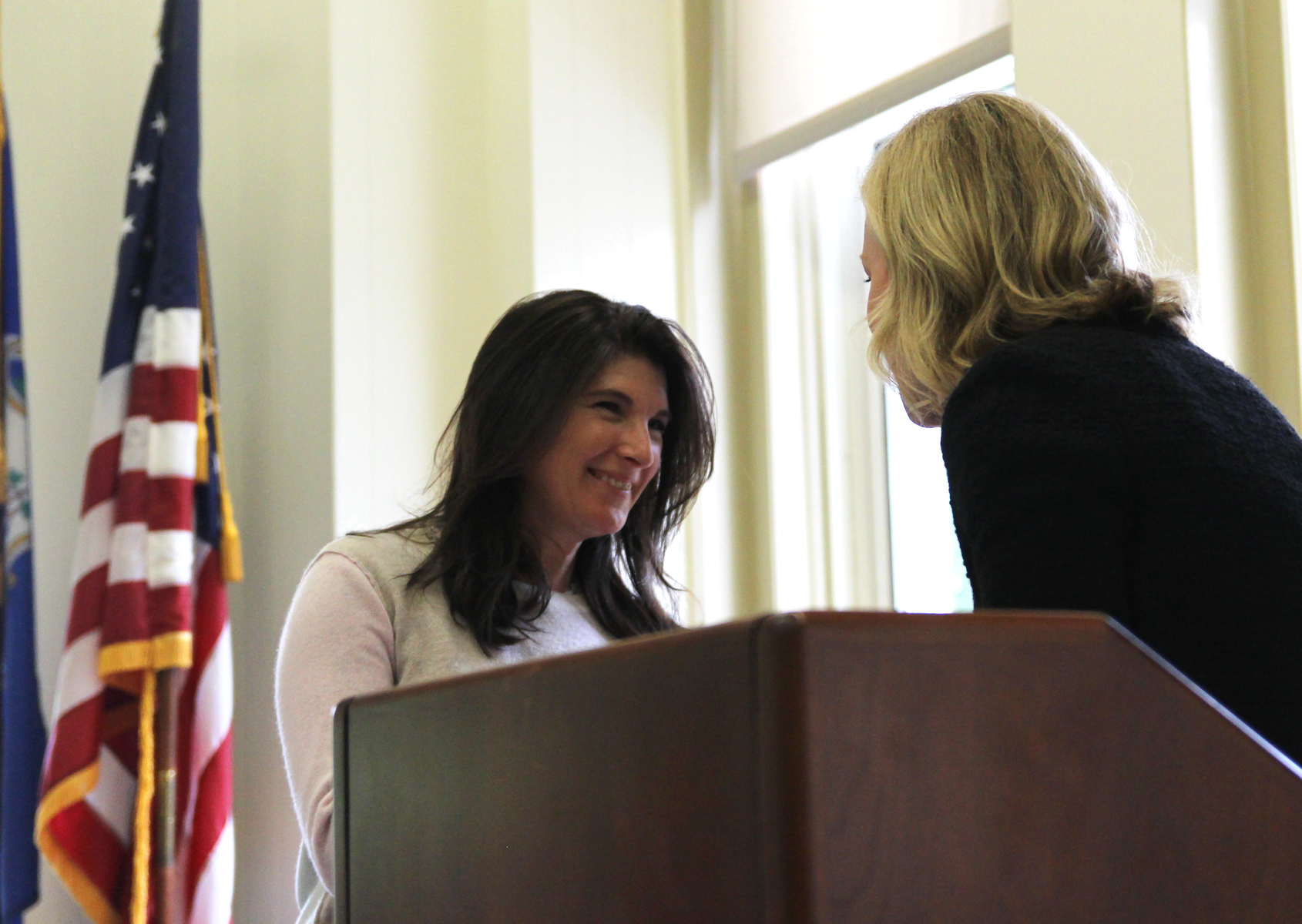 Nominated by Anne Gustaffson, Ellen Fullerton has been an active member of the Old Greenwich School and Eastern Middle School communities for many years.

She has been instrumental in bringing speakers to both schools for students and parents, and has served on PTAC for the past three years.

She has been the co chair and chair of the SIP/AE Committee which works in collaboration with the District and school administrators to ensure all PTAs support  the academic (SIP) goals of the schools. 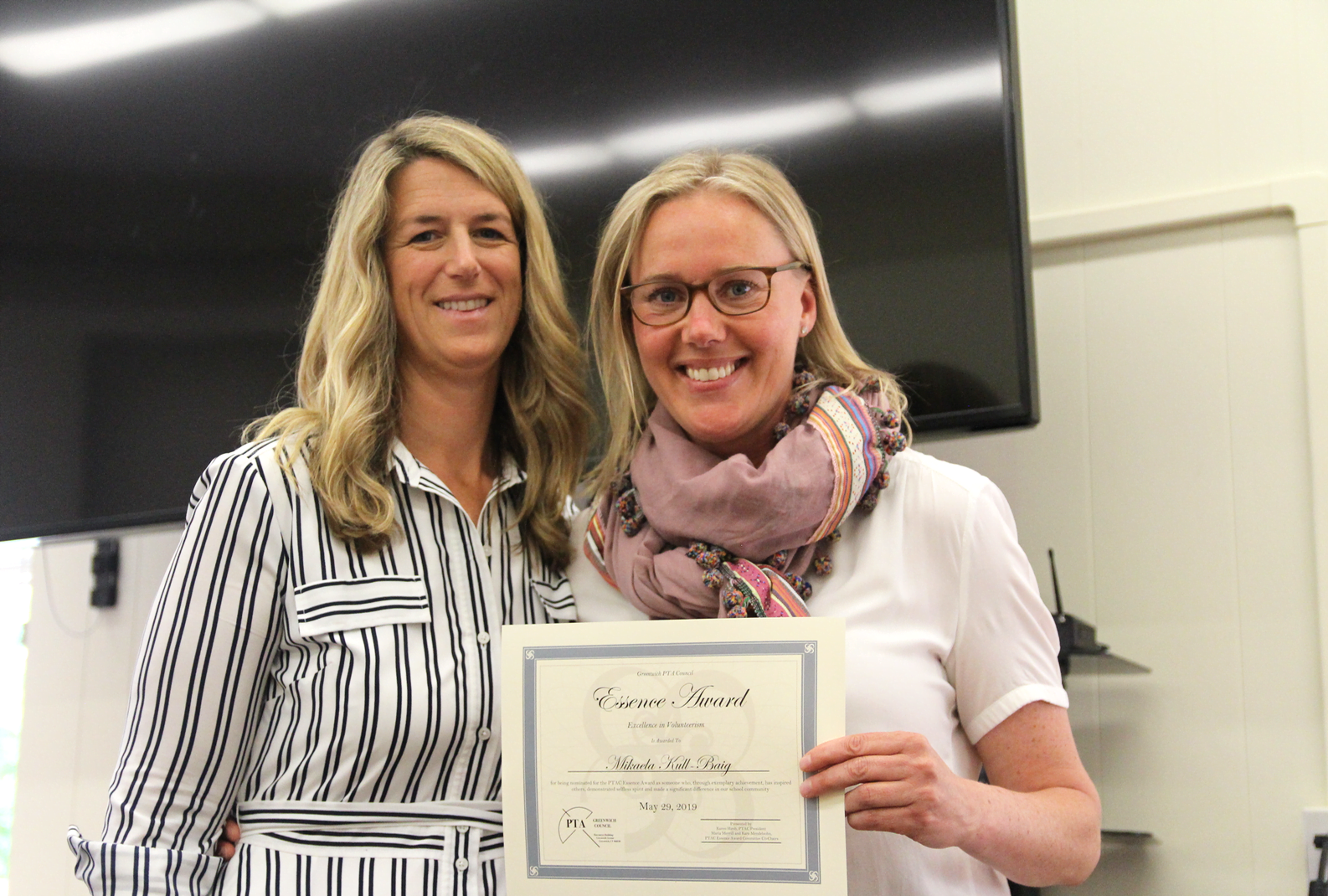 Mikaela Kull-Baig was nominated by Moica Huang. At Old Greenwich School she chaired the Afters Committee, a huge job, about which she never complained.

She later became co-president of that school’s PTA. Her nominator said she is “extremely approachable leader who makes both staff and parents comfortable, which results in a great work environment.” 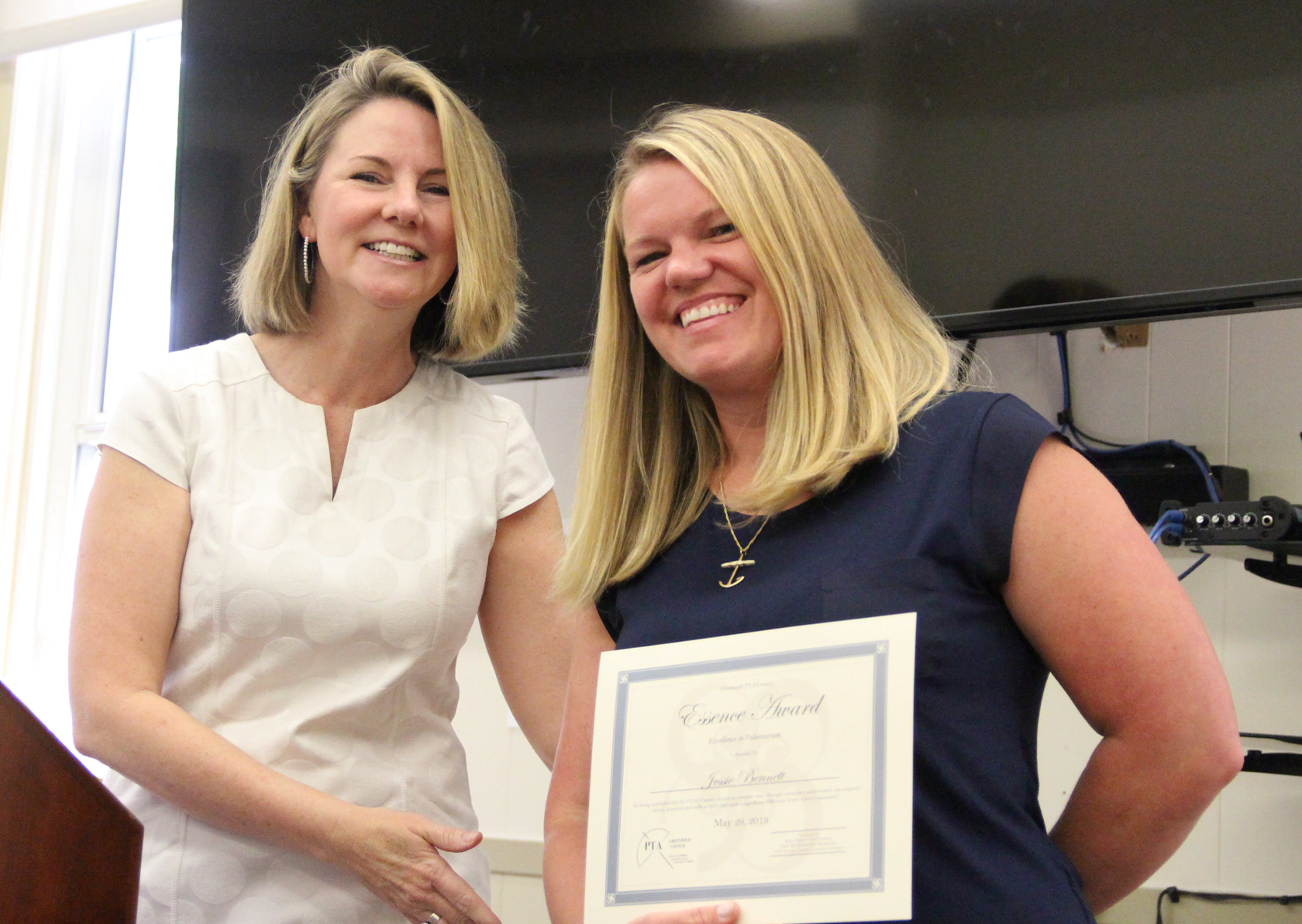 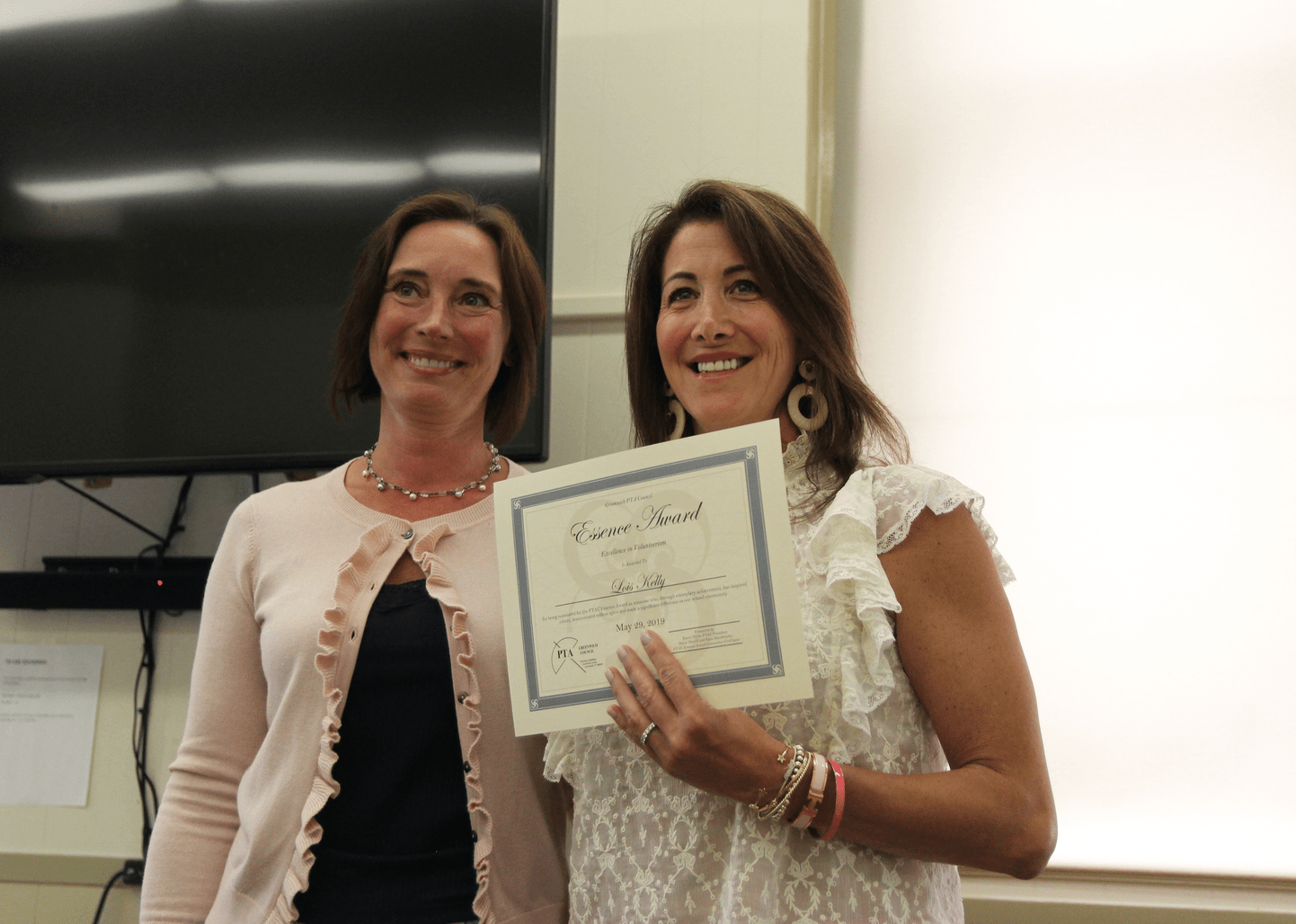 Lois Kelly, a PTA volunteer at Riverside School, was nominated by Sarah Morris and Kristin Duda. Over the past decade she has co-chaired the Riverside Run and served as VP of Class Parents and PTA co-president.

She also stepped up to co-chair the school’s beloved Halloween Boo Bash when no one else would. When the school needed Safety Duty help, she managed the weekly volunteers for morning drop-off. She is also a 5th grade class parent and serves on the nominating committee.

Her nominators wrote that she has an incredible way of moving things forward in a calm and steady way that comes across as effortless. 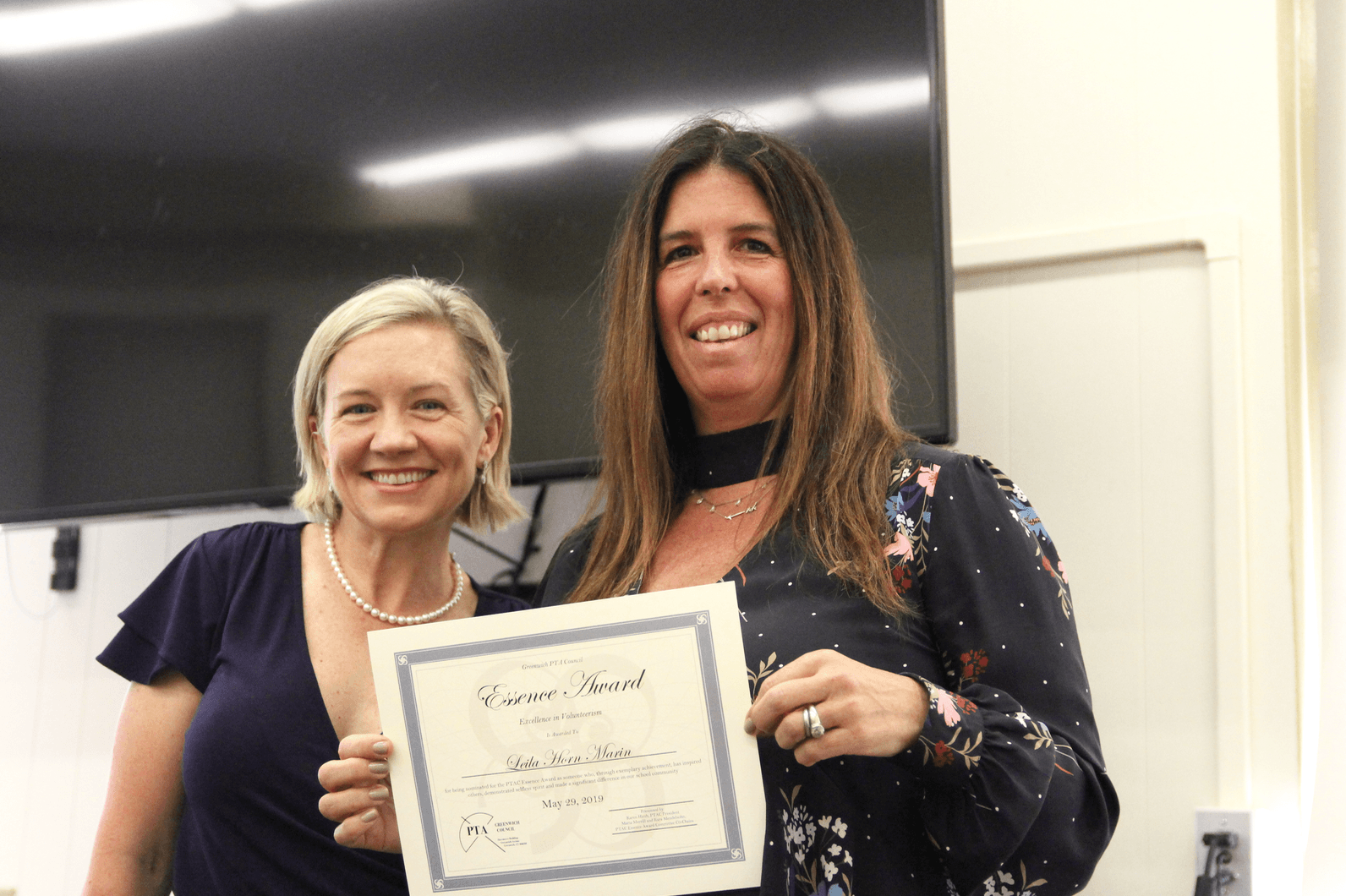 Leila Horn Marin was nominated by the Central Middle School PTA where she served as VP of Nominating and PTA co-president, and founded and managed the Early bird Program.

At CMS she again took on the role of co-president. After her term was up, one of the new co-presidents was unable to finish her term and Leila came back to help for another half year. She also co-chaired the school musical twice and ran the school fundraiser.

At GHS she co chaired the Parent Social Fundraiser.  In addition to her work at Cos Cob, CMS and GHS she petitioned the Greenwich Alliance to help fund the Odyssey of the Mind programs at Cos Cob and CMS. Both schools ultimately sent winning teams to World Finals.

The CMS PTA wrote, “When they hear Leila is overseeing or helping on a project, there is a palpable ‘PHEW!'” 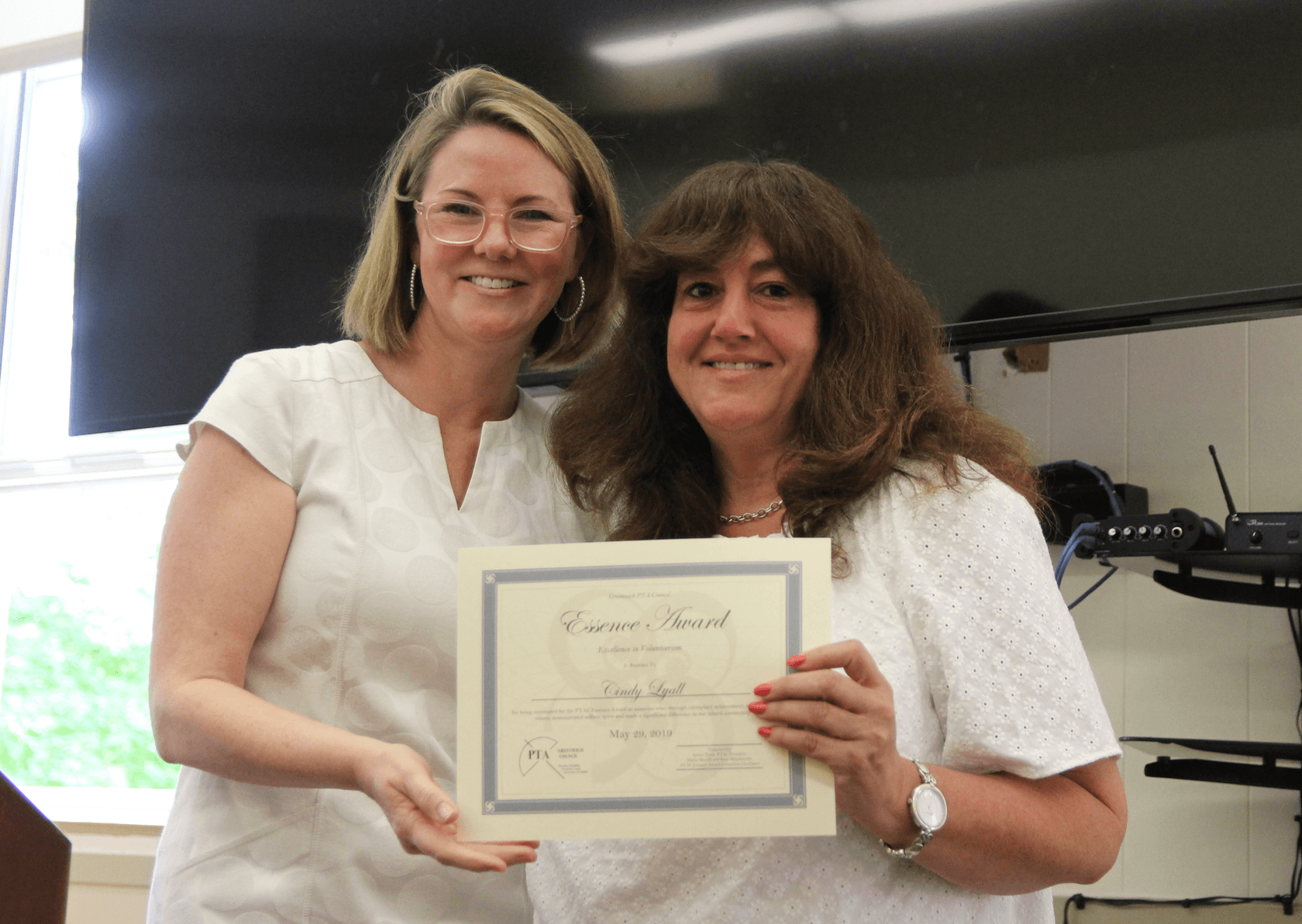 Cindy Lyall was nominated by the GHS PTA where she is currently the Treasurer.

The GHS PTA wrote that in her role, “Cindy has been entrusted with a significant fiduciary responsibility. She has been a steady force in this role, always advising the Board to keep the goals of the PTA in check and quietly working in the background to make sure that nothing is missed.”

She has been an AVID mentor, served on the Distinguished Teacher Committee and served as a House volunteer.

She has also served as a member of the Greenwich Alliance for Education’s Reaching Out Grants Committee for six years.

Cindy was also presented with the 2019 PTA Council Essence Award for Excellence in Volunteerism. 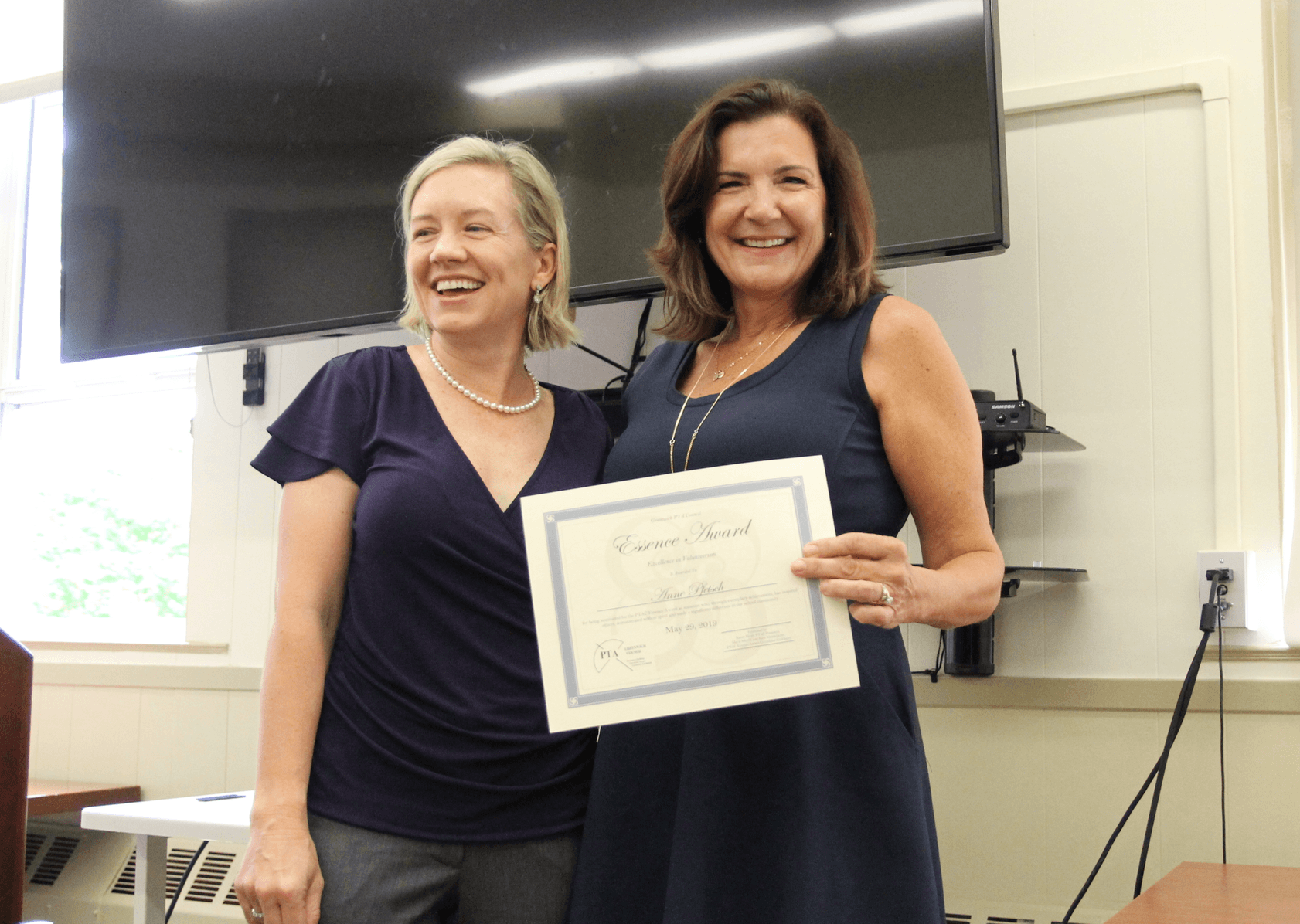 Katie Yu with Anne Pfetsch, the recipient of the 2019 PTA Council Essence Lifetime Award for Excellence in Volunteerism. May 29, 2019 Photo: Leslie Yager 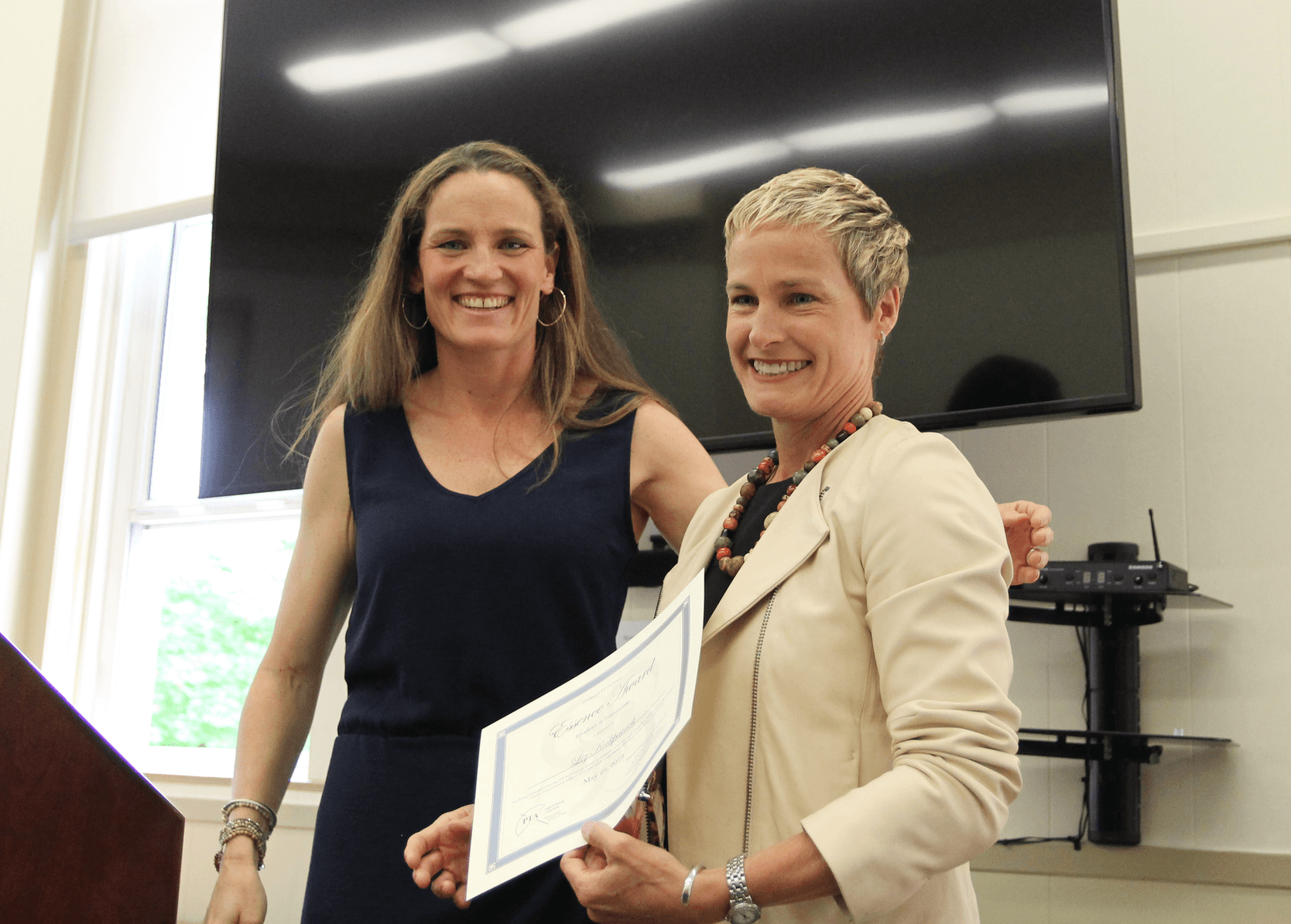 PTA Essence Committee co-chair Kara Mendelsohn with Essence Award recipient Liz Kirkpatrick, who was nominated by the GHS PTA. Liz is the VP of Communications for the GHS PTA. May 29, 2019 Photo: Leslie Yager

Liz Kirkpatrick was nominated by the GHS PTA where she serves as VP of Communications. The GHS PTA described her as “one of the most thoughtful volunteers you will ever run into. She is always anticipating what needs to be done and problems that may rise.”

She is responsible for writing the PTA’s section of the Parent Link the GHS monthly newsletter, maintaining the GHS PTA website, MySchool Anywhere administration, email blasts throughout the year, overseeing the display cases at GHS, keeping all social media outlets current and creating the online directory.

Liane Tel from North Street School was not present, but received an Essence Award after being nominated by Alison Hoenig and Maria Leamon Nedder.

In 2017-18 she brought Watch D.O.G.S. (Dads of Great Students) to the school. The purpose of the program is to highlight fathers as positive role models in education. This year she headed the school’s Green Schools Committee and taught recycling to students. She was instrumental in securing a compost bin at the school and planned the school’s Earth Day celebration. 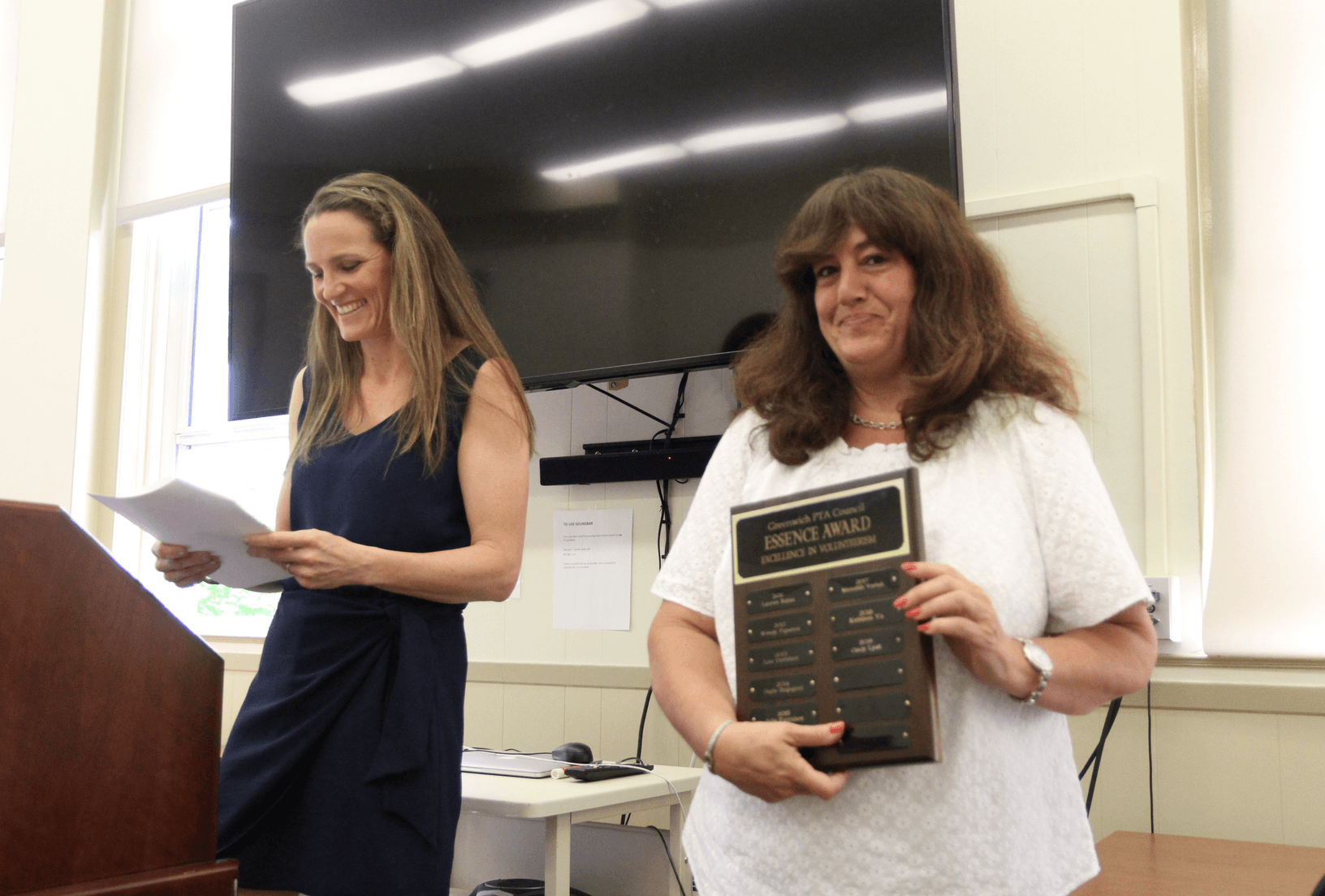 Cindy Lyall received the PTA Council Essence Award for Excellence in Volunteerism. She was nominated by the GHS PTA where she is currently serving as Treasurer. May 29, 2019 Photo: Leslie Yager 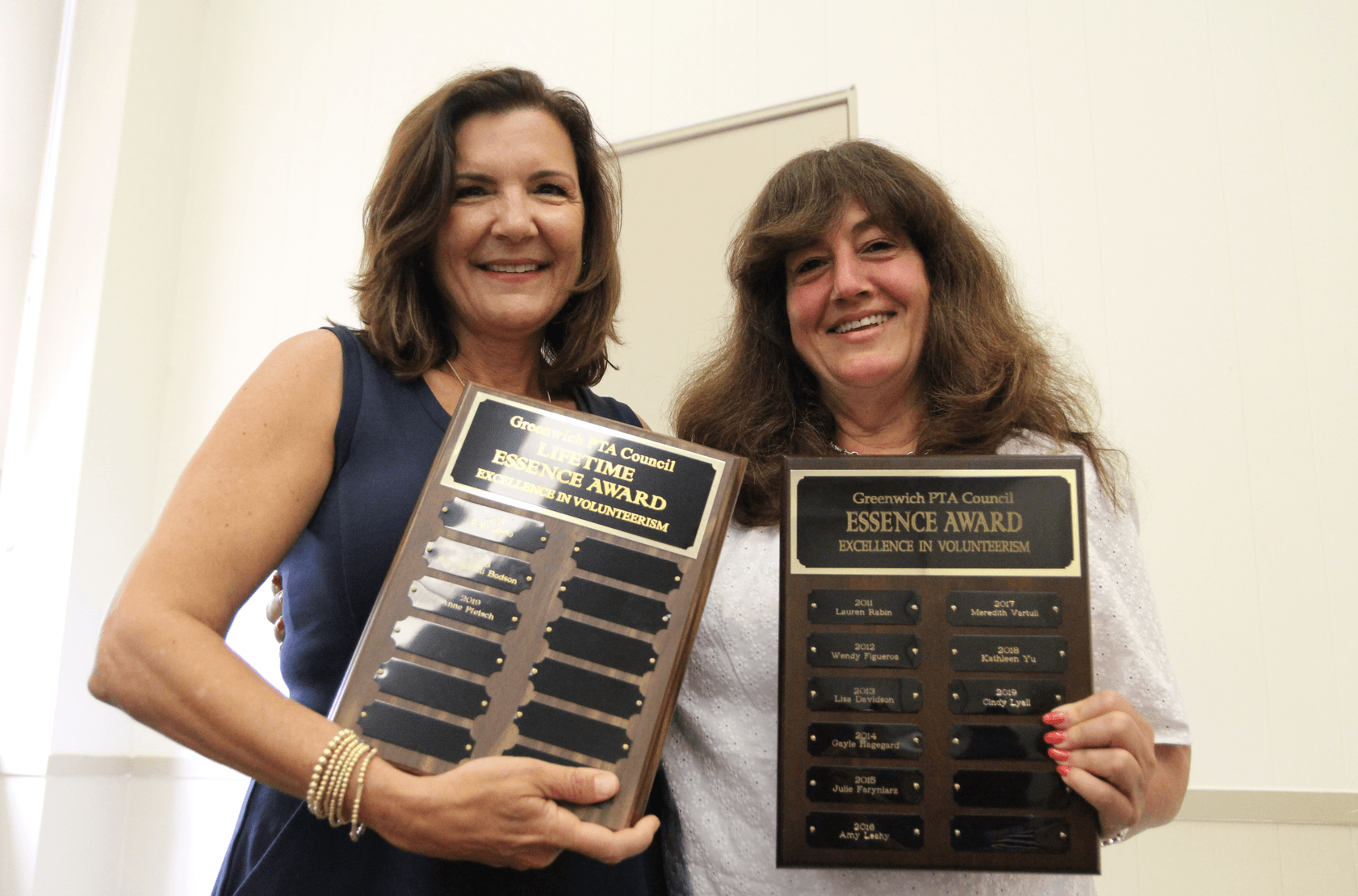