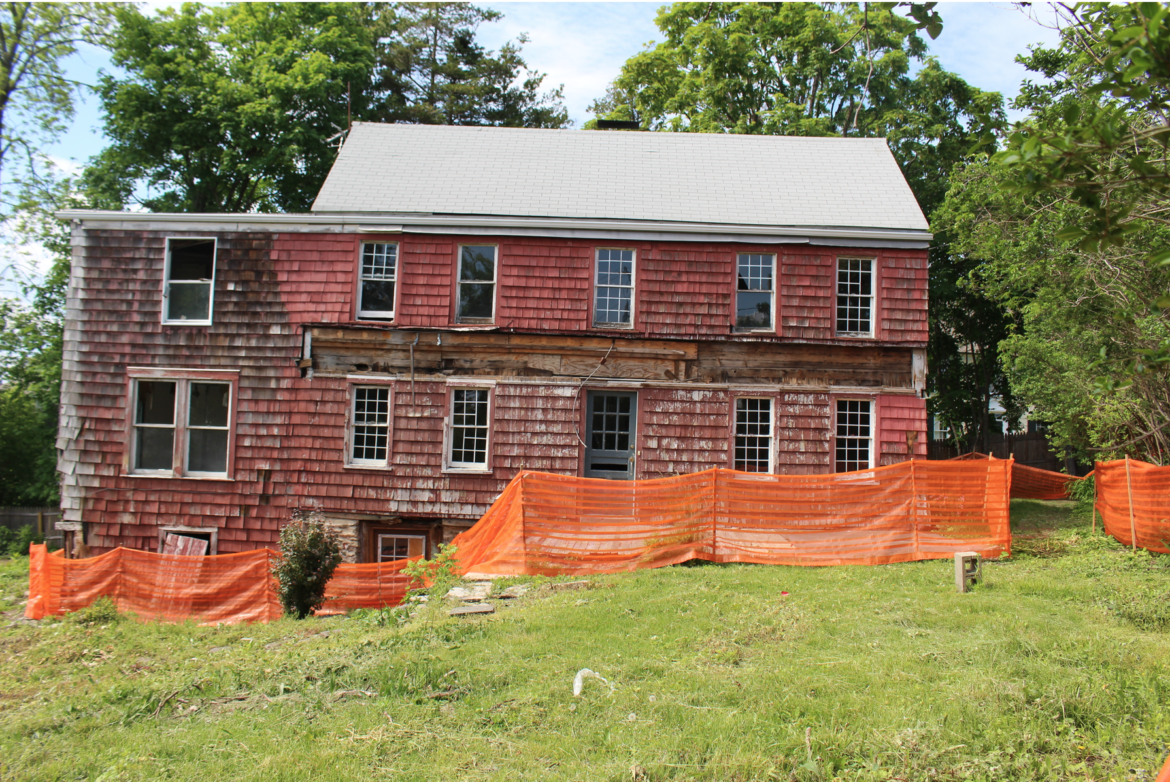 At Greenwich Free Press, the What’s-Next-for-the-Wrecking Ball feature, which chronicles the depletion of the town’s historic houses, is a popular series.  This week, for a change, we report that the Jeffrey Ferris House (Elizabeth Winthrop Feake House), on Shore Road in Old Greenwich, will meet a better fate.

“This house was a treasure hidden right under our noses,” said Chris Franco of the Greenwich Point Conservancy, during a recent interview in the Tod Conference Room on the second floor of the historic Innis Arden Cottage overlooking Long Island Sound. “It had been posted for demolition, and a group of people came together to say it must be saved.” 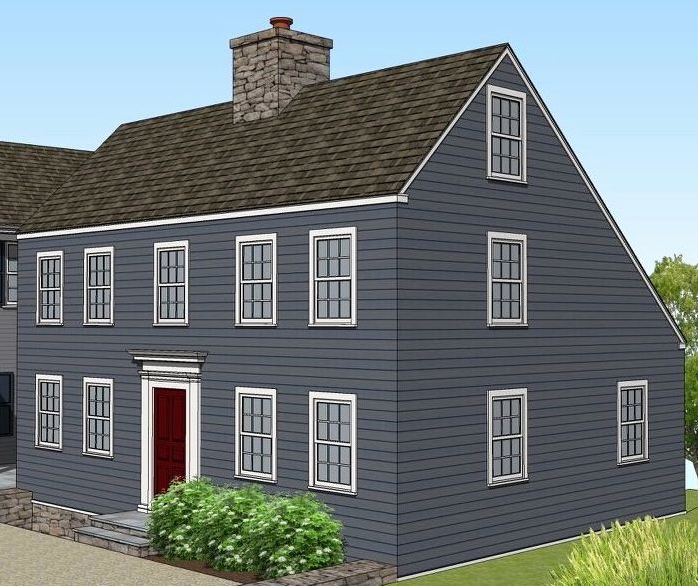 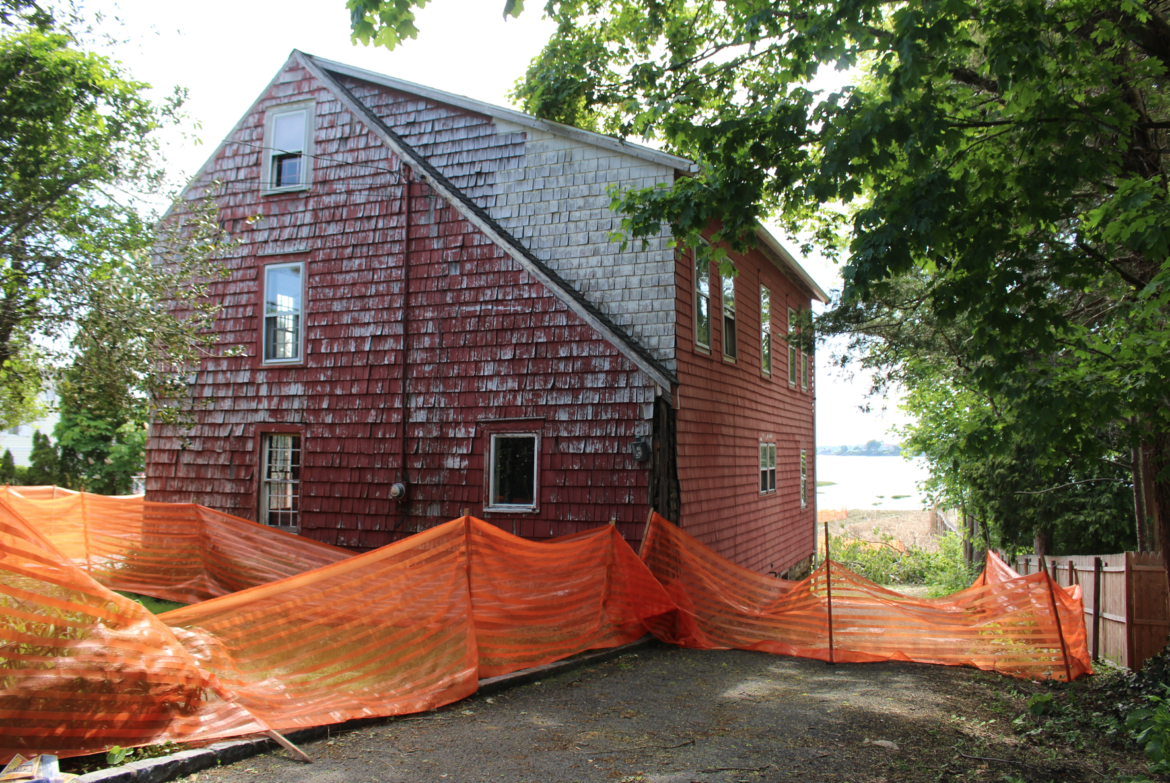 “The peninsula we call Greenwich Point was known as Elizabeth’s Neck from the founding of the town in 1640 until the Tods re-assembled the property from various Ferris heirs in the 1880s.  Elizabeth’s Neck originally included the Ferris House property, so given the importance of this house the Greenwich Point Conservancy broadened its mission to include this historic property,” Mr. Franco said.

Franco explained how new research of historic deeds and a fascinating “wood-dating” technology called “dendrochronology” led to the discovery that the weathered red house is the oldest house in Greenwich, and is likely even the first house in Greenwich!

According to Mr. Franco, who grew up in Riverside, local lore had it that the familiar red house dated back to around 1700.  But, obscured by overgrown shrubbery, in recent decades the house didn’t appear to be very special and had become largely forgotten.

When consulted, local historians at the Greenwich Historical Society and the Historic District Commission concurred that the Ferris House was an early colonial-era house, however the details regarding its provenance were murky.

“We decided we needed to get accurate information regarding the Ferris House.  That started with research at the Historical Society’s archives and in town hall to see what records existed,” Mr. Franco said, adding that historian Missy Wolfe, an expert in 17th century deeds, generously donated her time and expertise and poured through documents in the 17th century document vault in the basement at Town Hall. 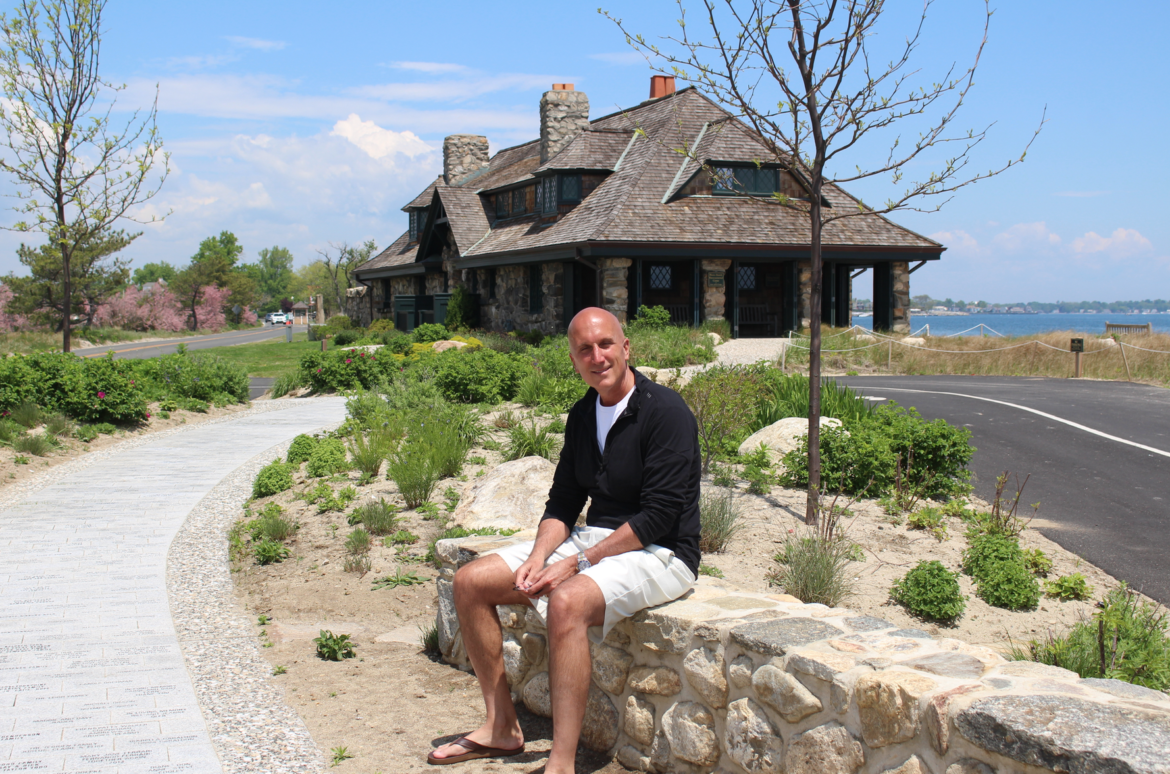 Once the house was empty of the previous owners’ accumulations, the Greenwich Point Conservancy began studying the house and the property’s physical characteristics in earnest.  Archaeologists associated with Historical Perspectives, managed by historian Ceci Saunders, worked for many months doing archaeological digs on site.  Also, upon the recommendation of Davidde Strackbein, Chairman of the board of the Greenwich Historical Society, the Greenwich Point Conservancy reached out to Columbia University’s Lamont-Doherty Earth Observatory, which maintains a highly-regarded database of wood samples, by age and region, in order to date the centuries-old post and beam structure.

The research project benefited from Lamont-Doherty’s scientific method of dating wood based on an analysis of patterns of tree growth rings. According to Mr. Franco, “dendrochronology” involves taking a boring of the wood that is about the width of a dime and analyzing the tree rings in the boring. “To get a good reading, you need in the range of approximately 70 tree rings,” Mr. Franco said, adding that the tree rings have unique characteristics not unlike a fingerprint that correlate to a specific growing period.  If the wood sample has bark or sapwood, which is ideal, you can determine the date that the wood was cut quite precisely.

Excellent wood-bore samples were obtained from multiple posts and beams on each floor of the Ferris House, and amazingly the entire structure has been determined to be an intact post and beam structure that is dated by Lamont-Doherty to 1688/ 1689. This makes the Ferris House the oldest building in Greenwich by several decades.  And, in fact, the “summer beam” in the cellar of the house was dated to 1610, which was several decades before Elizabeth Winthrop Feake and her husband settled Greenwich and built a house here.  However, the summer beam does not contain bark or sapwood, so while the boring section dated to 1610, the absence of bark or sapwood means that the cutting date of the beam would likely date to several decades later (possibly 1640 or perhaps the 1680s).

Elizabeth Winthrop Feake, who Mr. Franco described as a fascinating woman who became the subject of Anya Seton’s book “The Winthrop Woman,” was unfortunately considered by the English in her era to be an adulteress.  “Elizabeth’s husband Robert Feake abandoned his family shortly after they settled Greenwich.  Elizabeth went to New Amsterdam – New York City – which was then Dutch territory, to get her marriage annulled so that she could marry William Hallet,” Mr. Franco said.

At the time and as part of this accommodation Elizabeth agreed that the Dutch would rule Greenwich. Later in 1653 the English and Dutch made a treaty and agreed that Greenwich would revert to English rule, which forced Elizabeth to abruptly leave Greenwich and flee to what is now Astoria, Queens.  Prior to leaving Elizabeth and William Hallet sold the house and all their property in Greenwich to Jeffrey Ferris.  Ferris died in 1666, and from his will we know that he left his property in Greenwich “undivided” to his four sons. His youngest son, James, who was living with Ferris, was given all the personal possessions in the house and continued to live at the homestead. According to Mr. Franco, Missy Wolfe found a deed from 1688 in Greenwich Town Hall, indicating that the four sons finally partitioned the lands they had collectively inherited decades earlier from their father, with James Ferris now owning outright the house he had had lived in since his father’s death and had until then jointly owned with his brothers. Mr. Franco stated, “we know from the dendrochronology that the house was rebuilt in 1688/1689 – possibly over an earlier original cellar and summer beam,  which makes sense, since the deed shows us that James Ferris finally owned 100% of the homestead, after previously sharing ownership with his brothers for many years.”

The Ferris House has now been established to be the oldest house in Greenwich, preceding by several decades the Thomas Lyon House, the Bush-Holley House and Knapp Tavern (Putnam Cottage), which all have been dated by Lamont-Doherty dendrochronology testing to the early 1700s.

“It’s exciting that the Ferris House is the oldest house in Greenwich, and may even be the first house, so without question it’s an amazing find,” Mr. Franco said.  He noted that the Greenwich Point Conservancy is thrilled that the house has been spared from the wrecking ball, and added that it was a close call.

“People thought the house was in bad shape and that it had been substantially altered,” Mr. Franco said, “but we have learned that we have a largely intact 17th century post and beam structure right here on Shore Road.  We worked with the Greenwich Historical Society and the Historic District Commission to obtain a stay of demolition,” Mr. Franco recalled. “We met with the people who owned the house as well as the prospective buyers, and we suggested that it would be unthinkable to demolish this historic house.”

Describing the three-party alliance that ultimately saved the house, which included the Greenwich Point Conservancy, the Leuder family, who were selling the property, and the Waters Family, who were the buyers, Mr. Franco said that the deal ensured the house would be saved and a preservation easement placed on the house that would permanently preserve the historic structure.

“This means the Ferris House can never be demolished or altered once it has been restored. It must be maintained in its restored condition in perpetuity,” said Mr. Franco.

Mr. Franco said that the Waters will build a new house on the water-side of the historic saltbox, and that the design of the new house will be complimentary to the saltbox.

“The Waters have been great people to work with,” Mr. Franco said of the couple, “and they are committed to the restoration and preservation of the historic saltbox”.  Ultimately, the familiar historic saltbox will be restored and opened to the public two weekends each year, which the Greenwich Point Conservancy will organize and oversee.

“It’s a win-win,” Mr. Franco said, explaining that the half-acre waterfront property was too expensive for the Conservancy to purchase in order to save the antique saltbox. And while the march of progress in Greenwich results in the loss of historic houses from Riverside to Byram and from back country to Milbank Ave, Chris Franco said that the success that the Greenwich Point Conservancy has had shows that there continues to be a strong appreciation for historic structures and places in Town.

“The key is to adapt these structures to the way people live today and will live for the next 100 years,” Mr. Franco said. Referring to the practice of ‘adaptive reuse,’ Mr. Franco said that more buildings could be spared. “If you restore and reuse them in a way that people can enjoy and embrace, it can definitely work,” he said.

To support the work of the Greenwich Point Conservancy and for the historic Ferris House, please visit www.greenwichpoint.org. 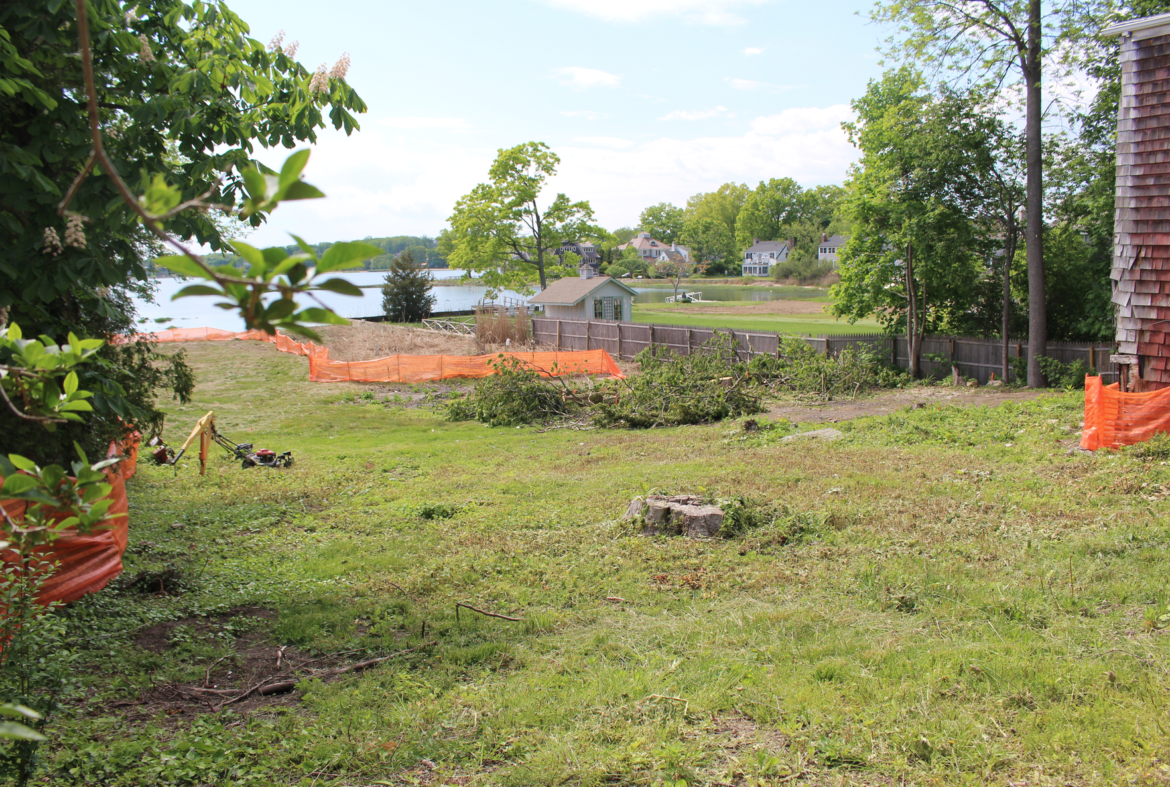