The Flinn Gallery has opened its exhibit Hazardous Beauty, an environmental art show that examines the collision of consumer culture with the natural world.

In an era when a man’s relationship with nature and its inhabitant is becoming increasingly uneasy, environmental art is more relevant than ever.

Just last week in Greenwich, the Reusable Carrier Bag Ordinance (RCBO) was approved by the RTM. The ban will go into effect in six months. The overwhelmingly positive vote encourages consumer accountability from a strong environmentally-minded town. 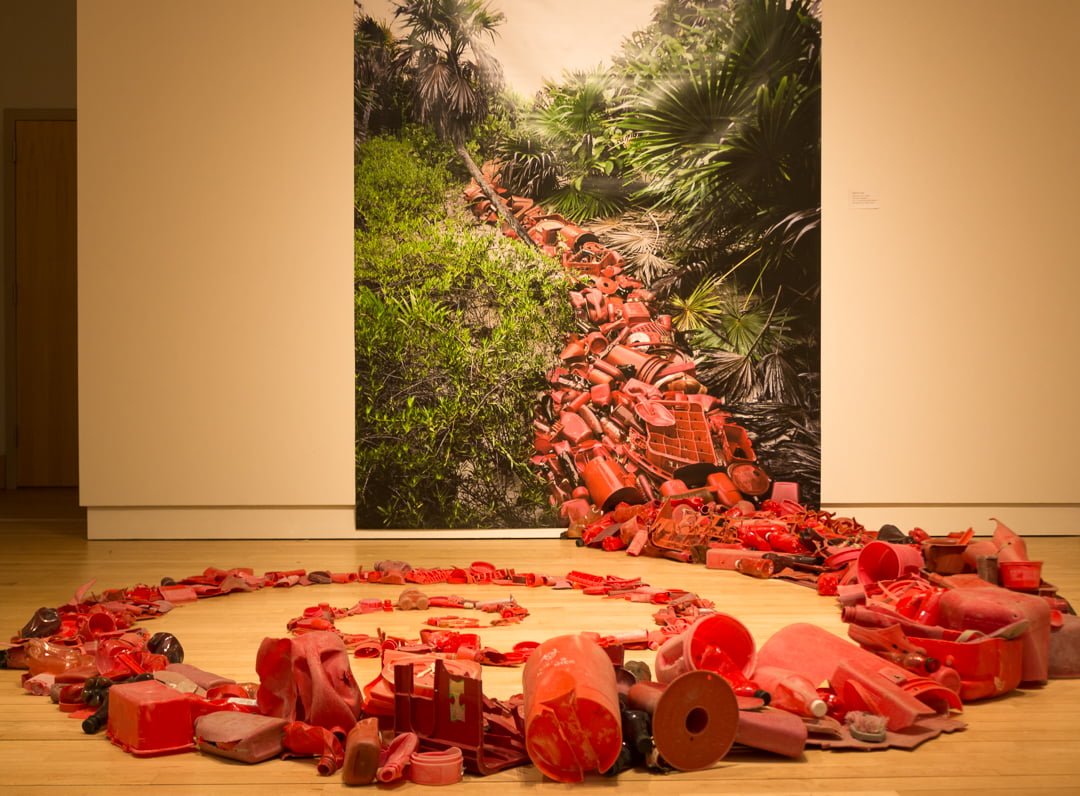 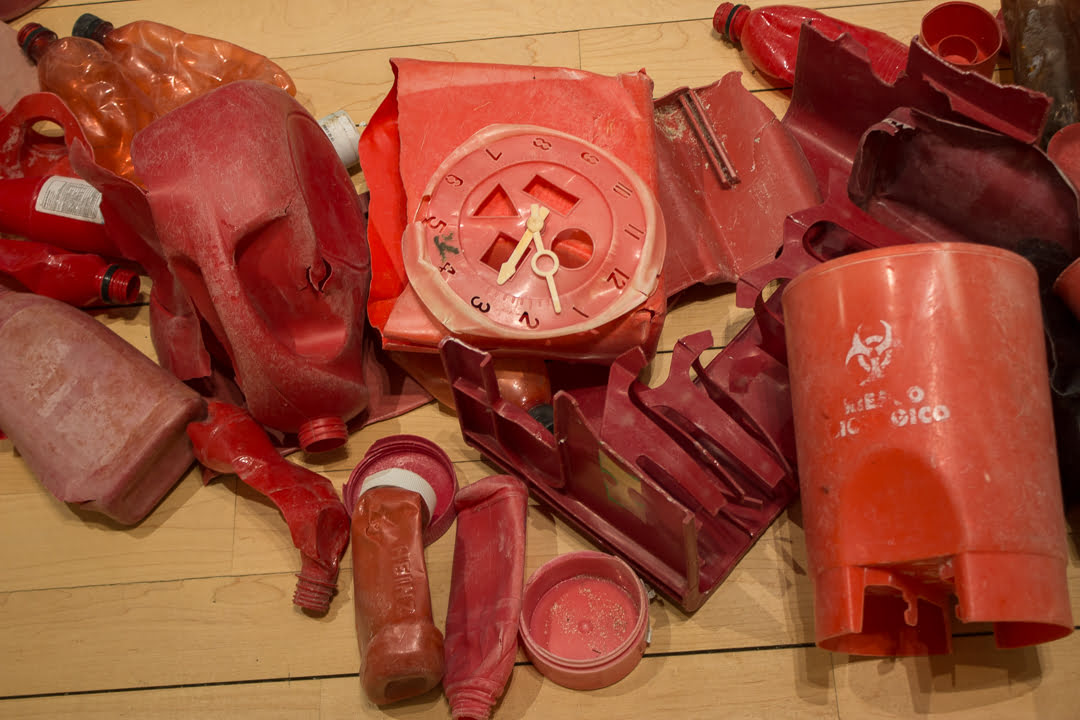 During the Artist Talk this past Saturday, both artists, Alejandro Durán and Willie Cole expressed their desires to create art with a sense of responsibility for defending the environment.

The purpose of the show is to engage a wide audience to offer a new perspective on the world in which we live. 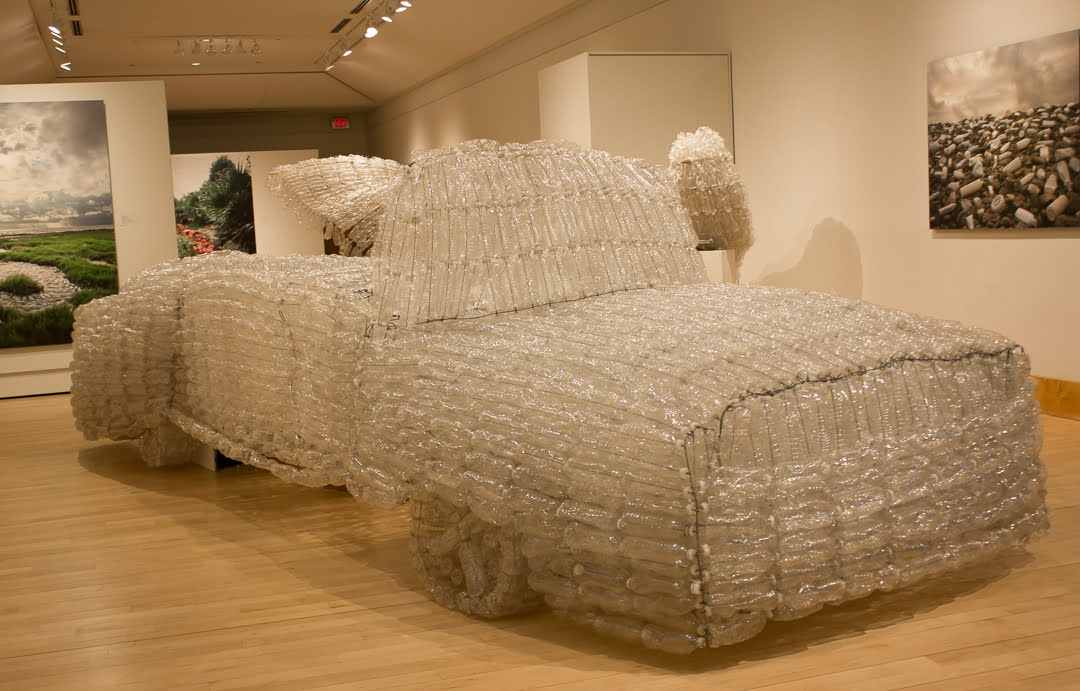 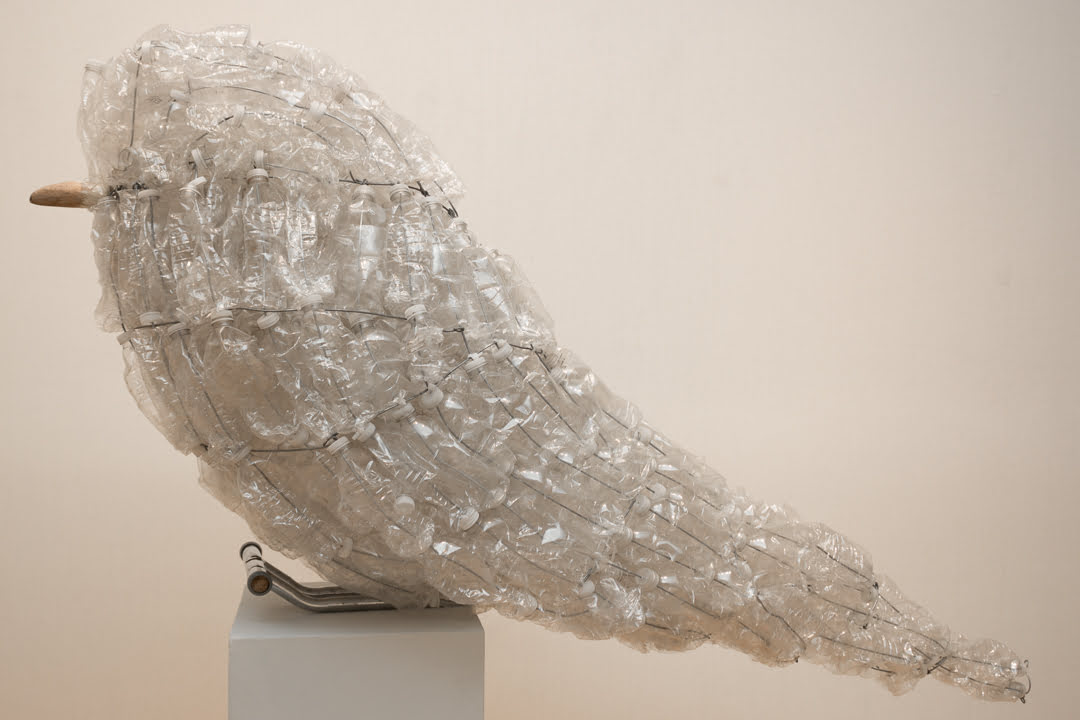 “We hope to communicate a balanced experience of aesthetically-pleasing art and science to help us understand that plastic pollution is a global to local problem,” said Curator, Ellen Hawley.

“The documentary, A Plastics Ocean offers a global view on its devastating impacts on marine life; and the panel discussion Plastics and Microplastics in the Long Island Sound helps us understand that plastic pollution is not some one else’s problem, but here in our waters too,” Hawley said. 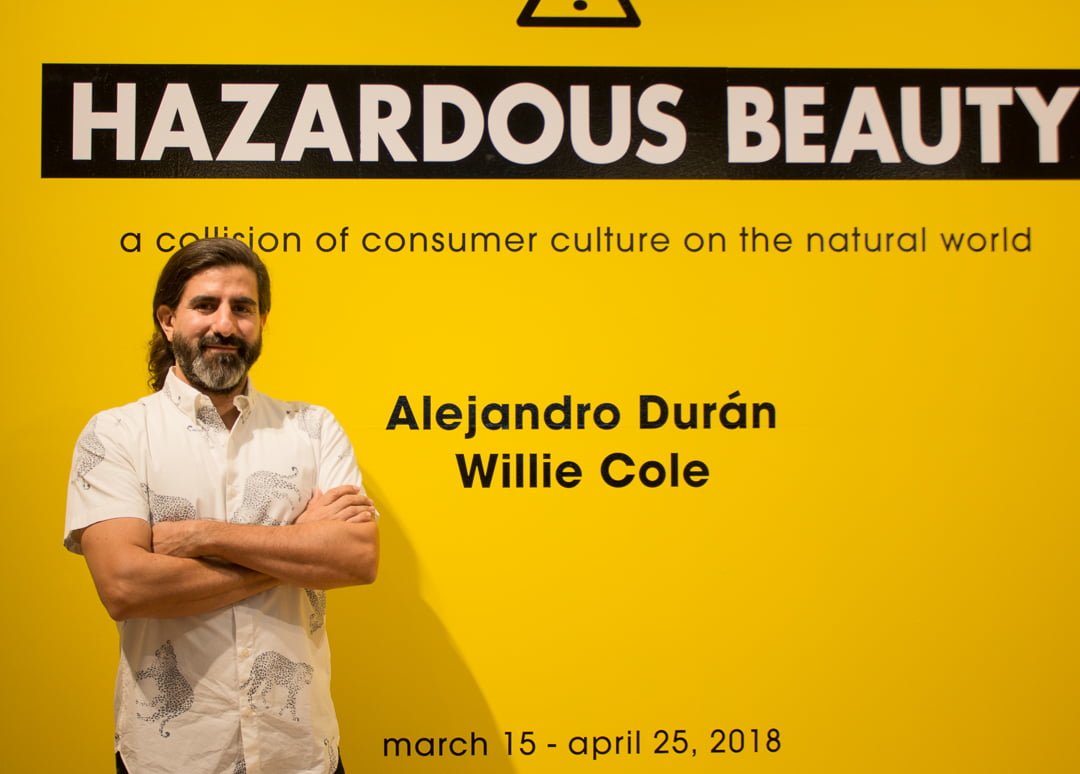 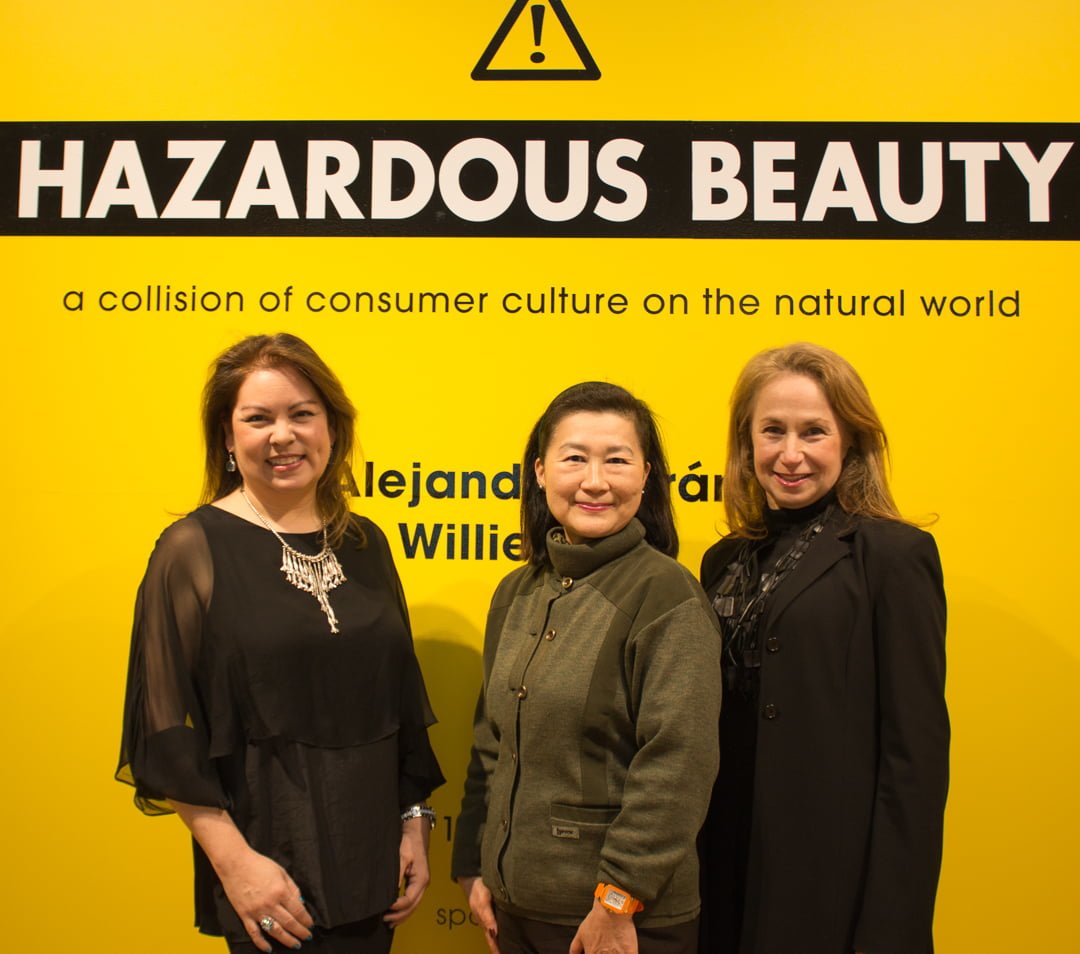 Brooklyn artist Alejandro Durán has been working on an environmental installation and photography project that creates a brilliant struggle between the natural hues of the landscape and the synthetic material of man-made objects.

The project, titled “Washed Up – Transforming a Trashed Landscape” the artist works on the beaches of Sian Ka’an, a biosphere reserve a few hours south of Cancun, Mexico – with plastic pollution that washes ashore along the sandy beaches.

He has also collected debris from 58 countries. 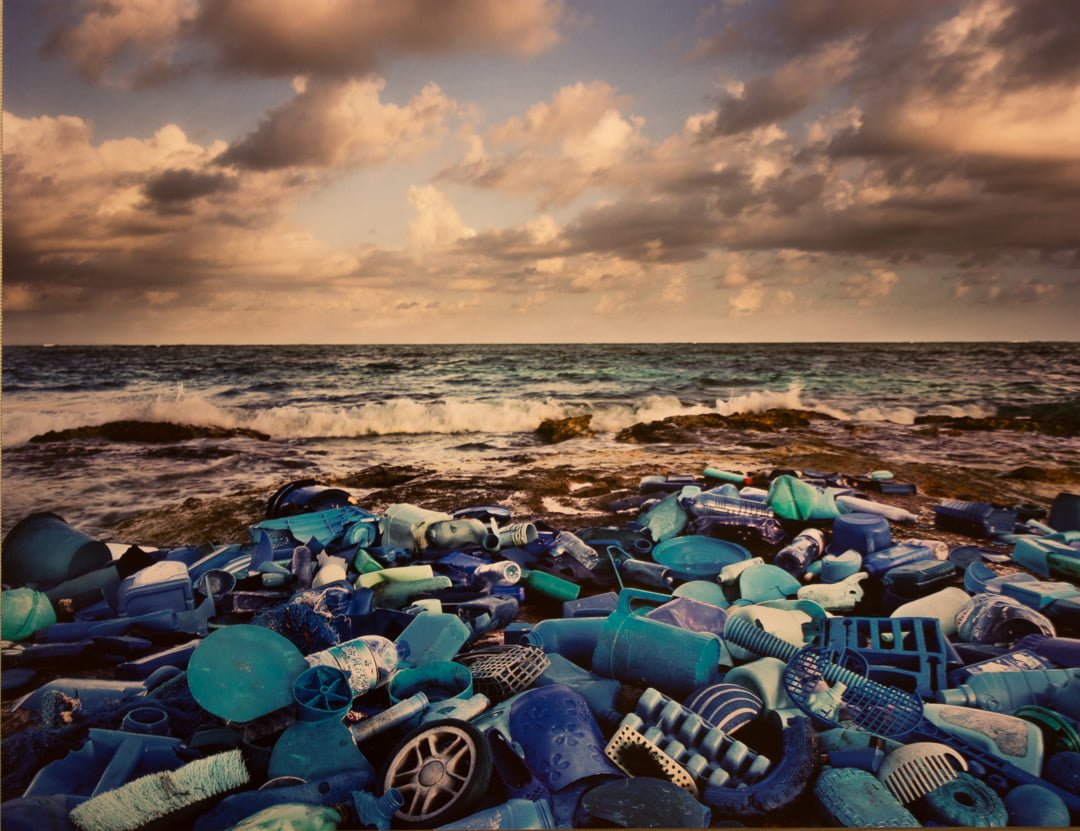 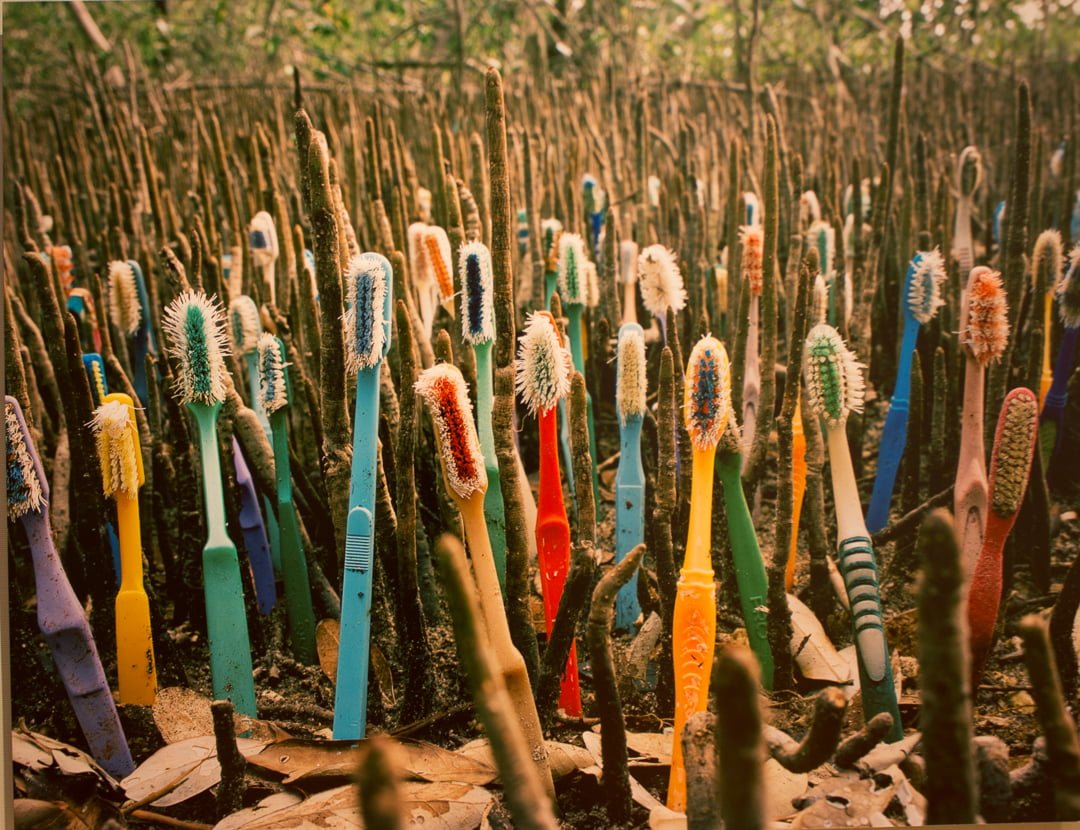 He creates color-based, site-specific sculptures that conflate the hand of man and nature. An old school, large format camera captures the images. “They take many days while waiting for the perfect light and alluring cloud formations,” said Durán.

Durán also creates a clever opposition between the natural hues of the landscape and the artificial glow of man-made objects. His sculptures often mimic the natural forms around them.

“The most difficult part of the project is collecting the garbage and organizing by color,” he said. “Beaches are covered in garbage, oceans are spitting up a poison that is dangerous for the marine ecosystem,” he added.

Durán has received numerous awards, displaying his works worldwide. He has taught youth and adult classes, and is also founder of a video production company. 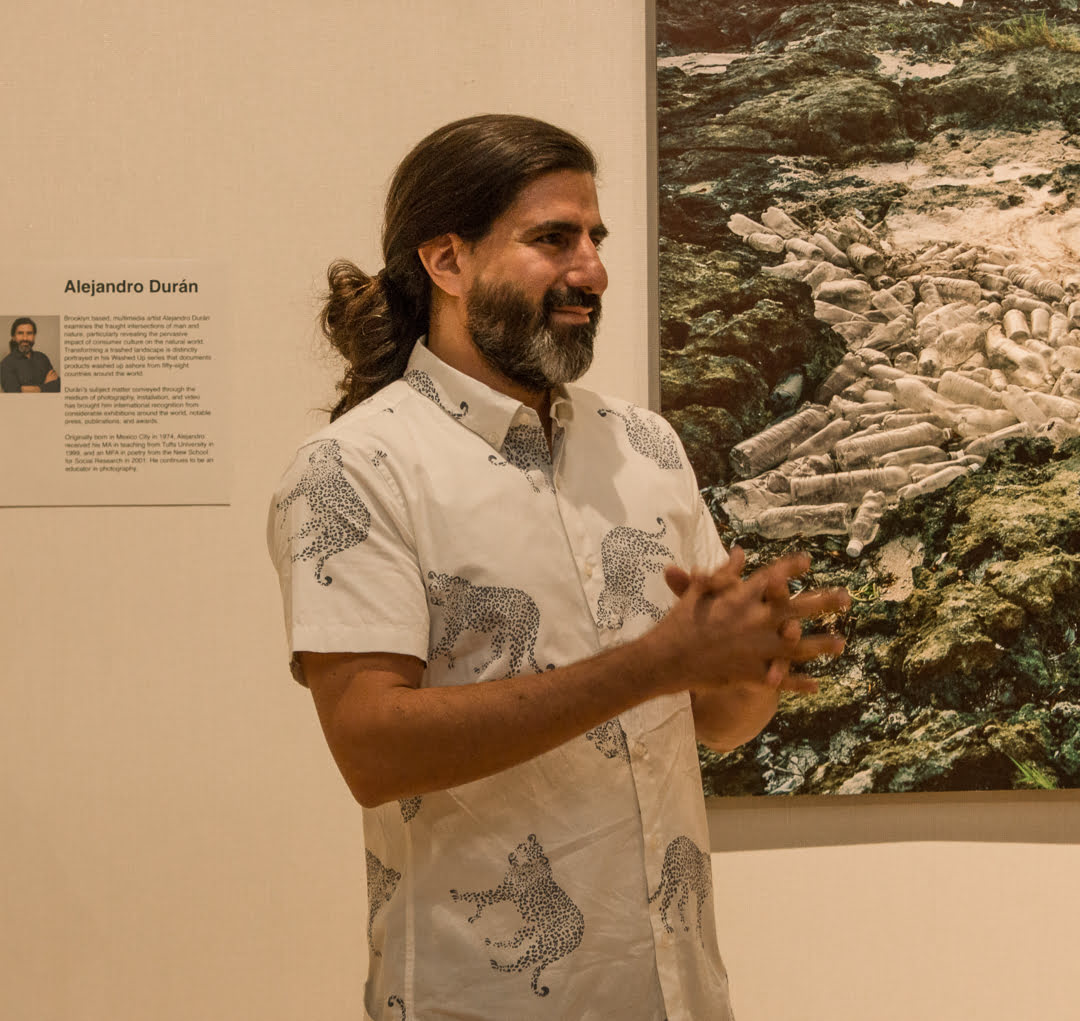 Willie Cole, a Morris County, NJ artist after working in other mediums, had a dream about creating sculpture out of discarded plastic bottles.

“Water is the most important thing in out diet… plastic bottles signify a death,” Cole said.

His first creation in this medium was a chandelier, six feet in diameter at its base and seven feet long.

A million plastic bottles are purchased worldwide every minute, with annual consumption set to top half a trillion by 2021. In a bid to bring awareness to the problem of plastic bottle use and pollution, artist Willie Cohen led a project to recycle and transform thousands of plastic bottles into an incredible sight to behold. 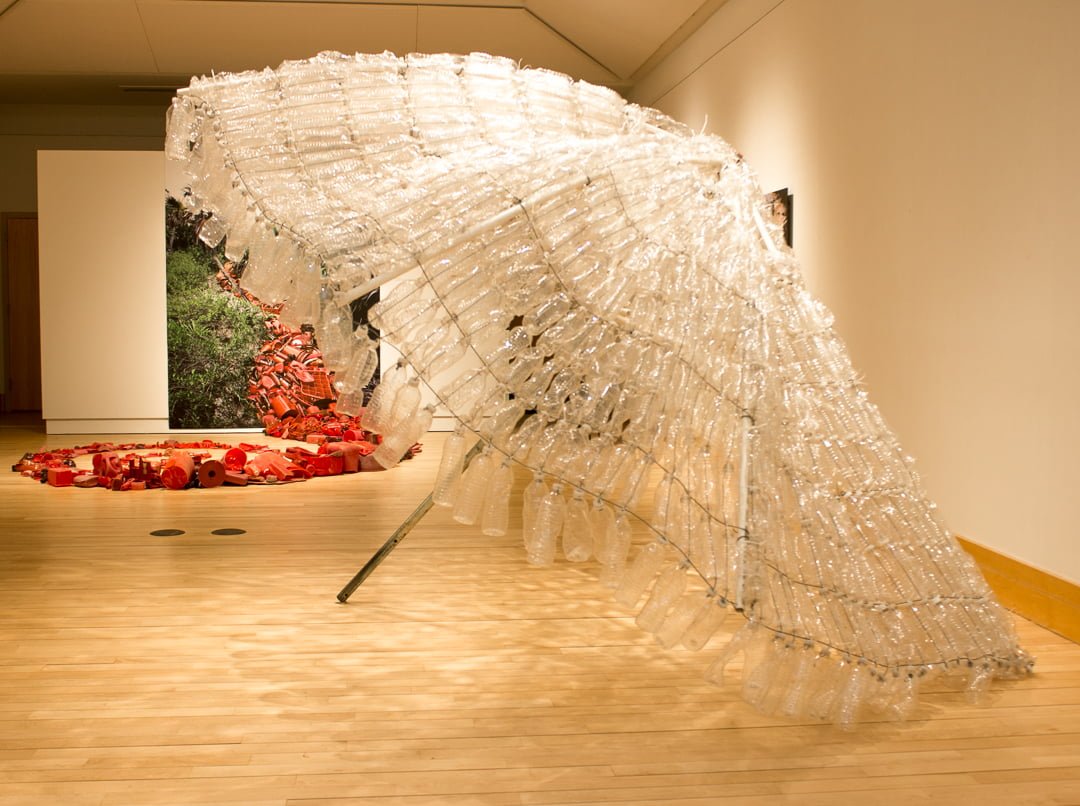 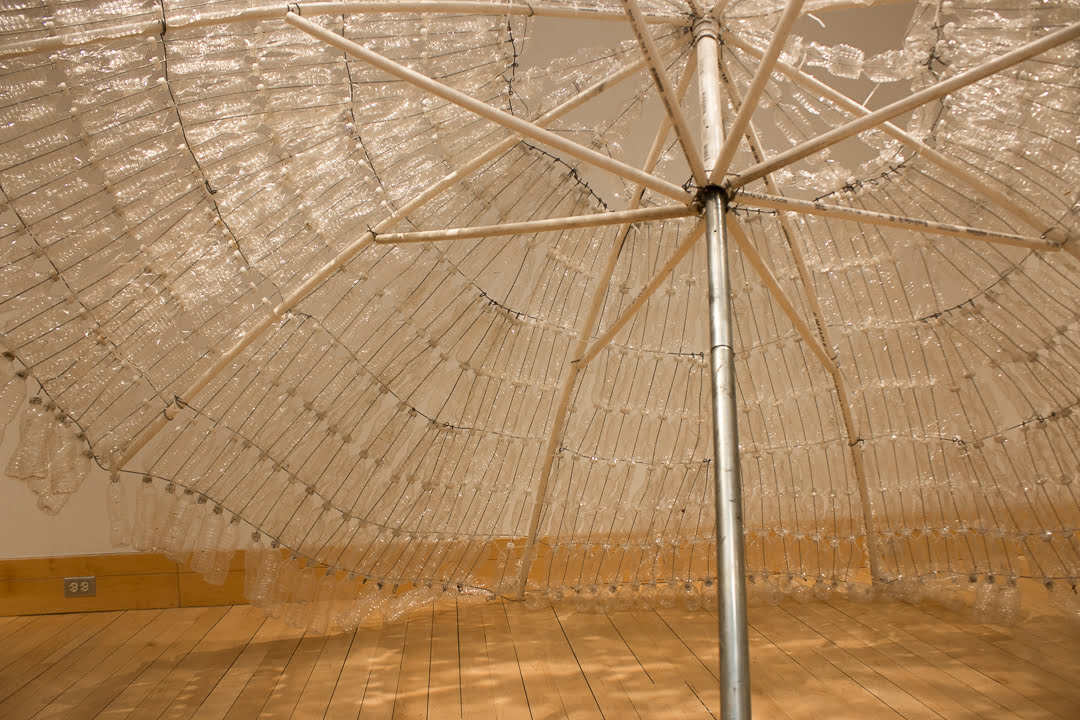 The construction of Umbrella by Willie Cole. Photo: Karen Sheer

Three sculptures are on display in the gallery. The largest is an automobile consisting of 3,000 clear water bottles artfully tied together by drilling into each cap. Cole explained his pieces as “wired sculptures covered in bottles.”

Cole has become internationally known, has received many awards for his work as an artist and served as an artist-in-residence at several institutions. 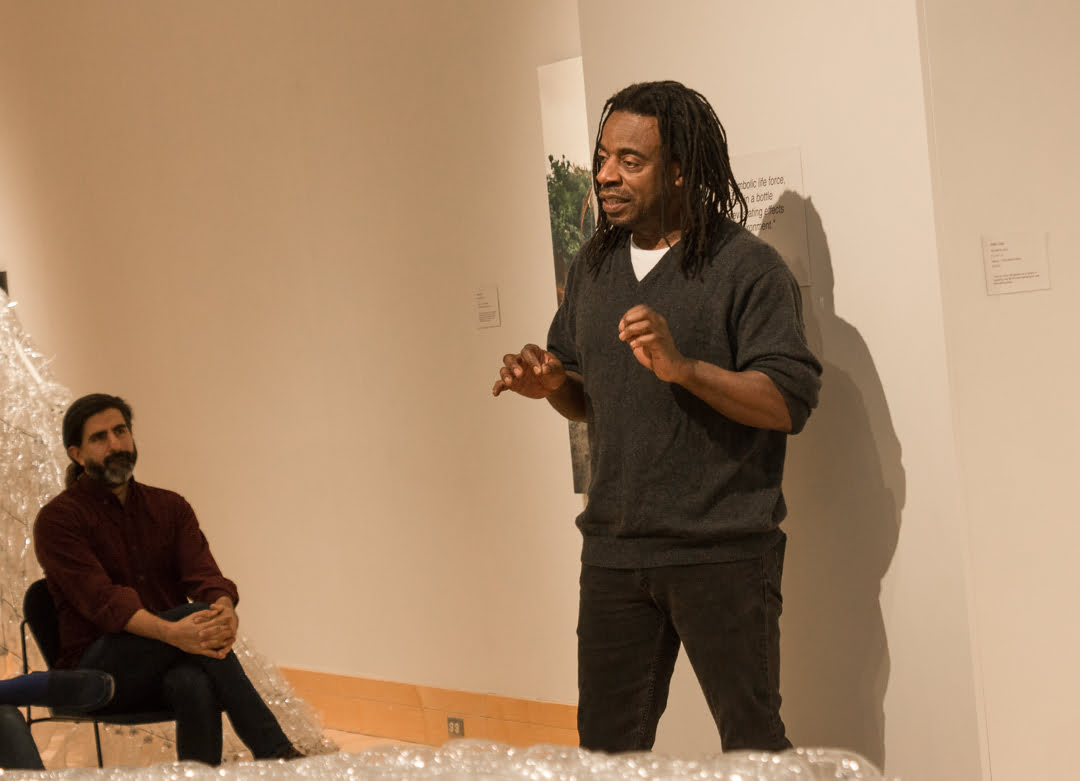 Artist Willie Cole at the Artist Talk in the gallery. Photo: Karen Sheer

Finding beauty in the commonplace by use of found objects is the artist’s strength in this exhibit at the Flinn Gallery.

The Hazardous Beauty exhibit and its events are sponsored by Anomaly Factor Productions, a media content production and distribution company that raises awareness for social impact related to environmentalism, education, women and girls, and mental health.

Ellen Hawley is Curator for the Hazardous Beauty exhibit and its corresponding events.

Shari Michael and Lillian Lum are assistant curators for the exhibit. The Flinn Gallery is a non-profit, education-oriented exhibition space that presents six exhibitions a year from September through June. The Gallery attracts close to 10,000 visitors annually. Art commissions help support the community programs of the Friends of Greenwich Library.

At the Flinn Gallery Opening and Artist Talk: 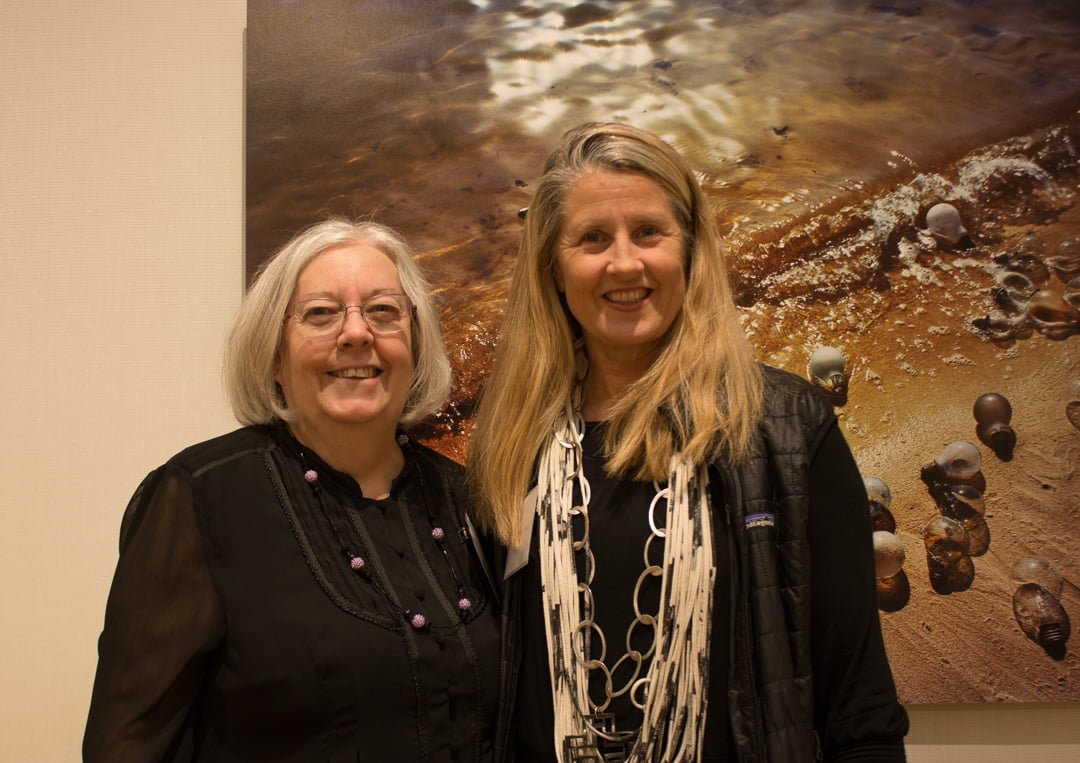 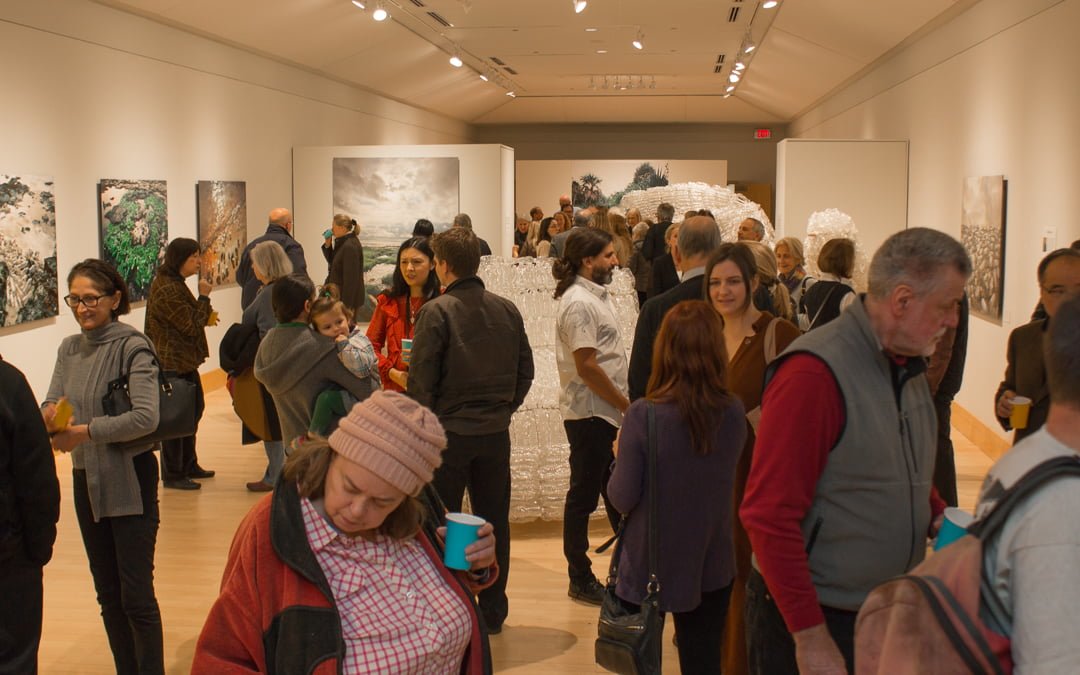 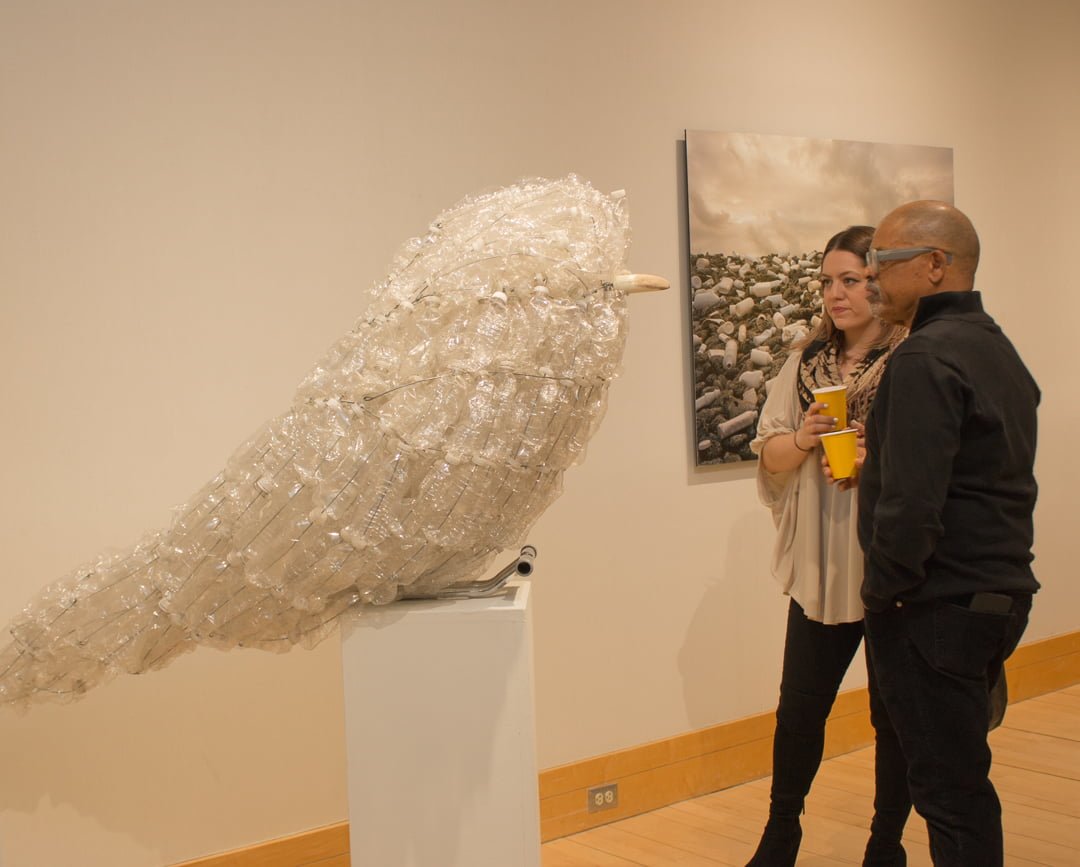 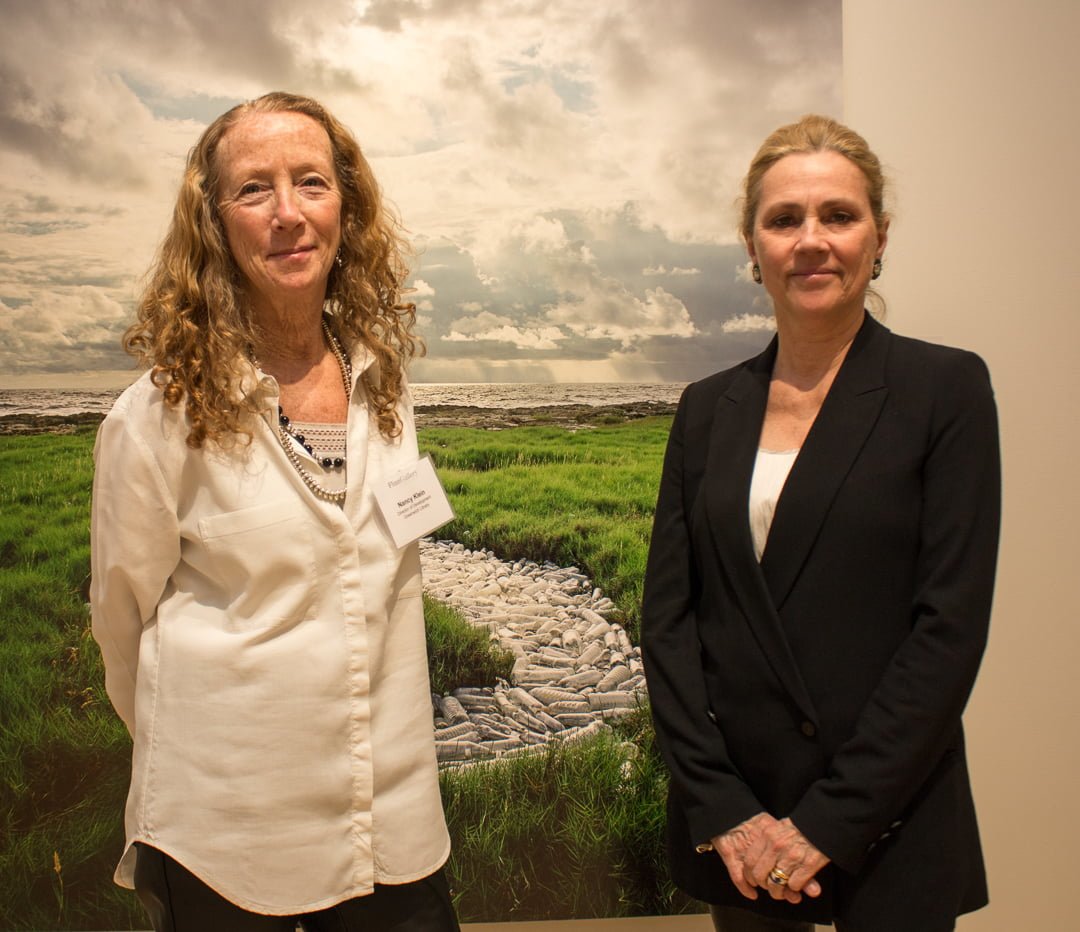 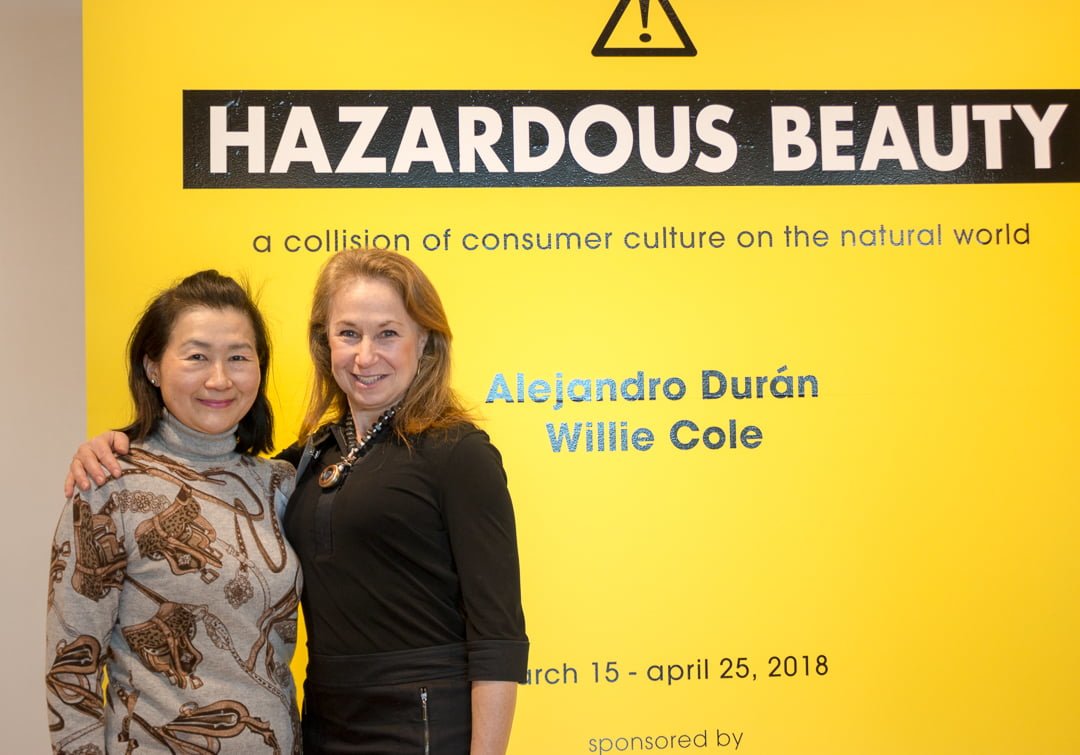 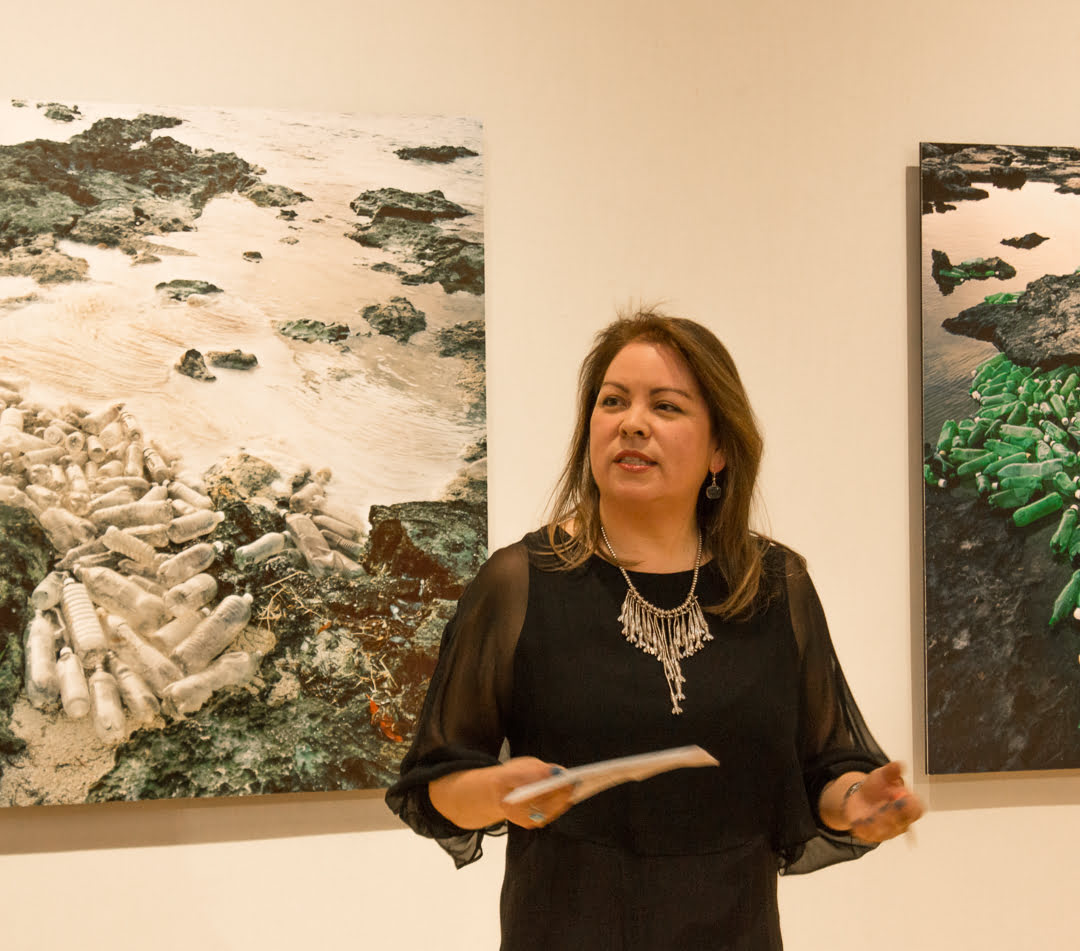 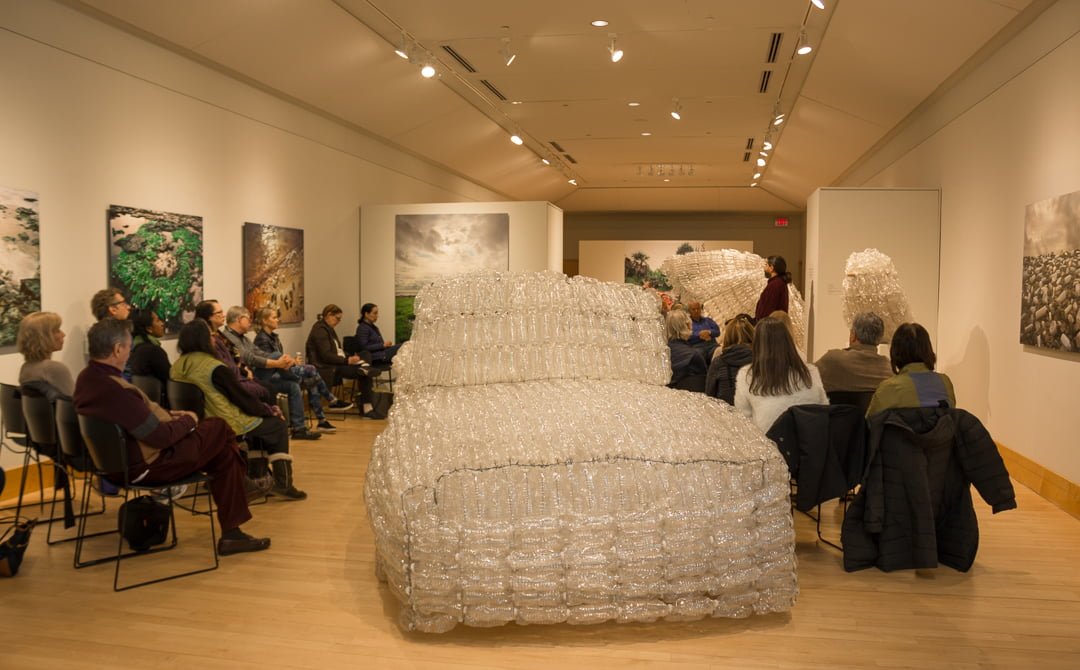 Events:
All are free and open to the public.

Friday, March 23, 6-7:45 pm
Art Lounge in the Flinn Gallery welcomes the public to the gallery on Friday, March 23 from 6:00pm to 7:45pm immediately preceding the Friends Friday Film screening A Plastic Ocean.

Also see:  The Future is Not Plastic in Greenwich. Plastic Bag Ban with Zero