On any given morning this summer, at around 8:15, Michael Manning filled his Black 1980’s Dodge Ram pickup with discarded items from the Holly Hill dump to repurpose into works of art with the help of children ages 5 to 15 at  Boys & Girls Club’s Camp Simmons.

Manning spends his summers running the Youth Art program at Camp Simmons which was donated to the Boys & Girls Club by the Simmons Family Trust in 1938. The camp sits on over 400 acres in back country and is one of a few places left in Greenwich where time stands still.

In addition to the items reclaimed at the dump, Manning often spends his days off reaching out to local businesses for materials to use in the art program. 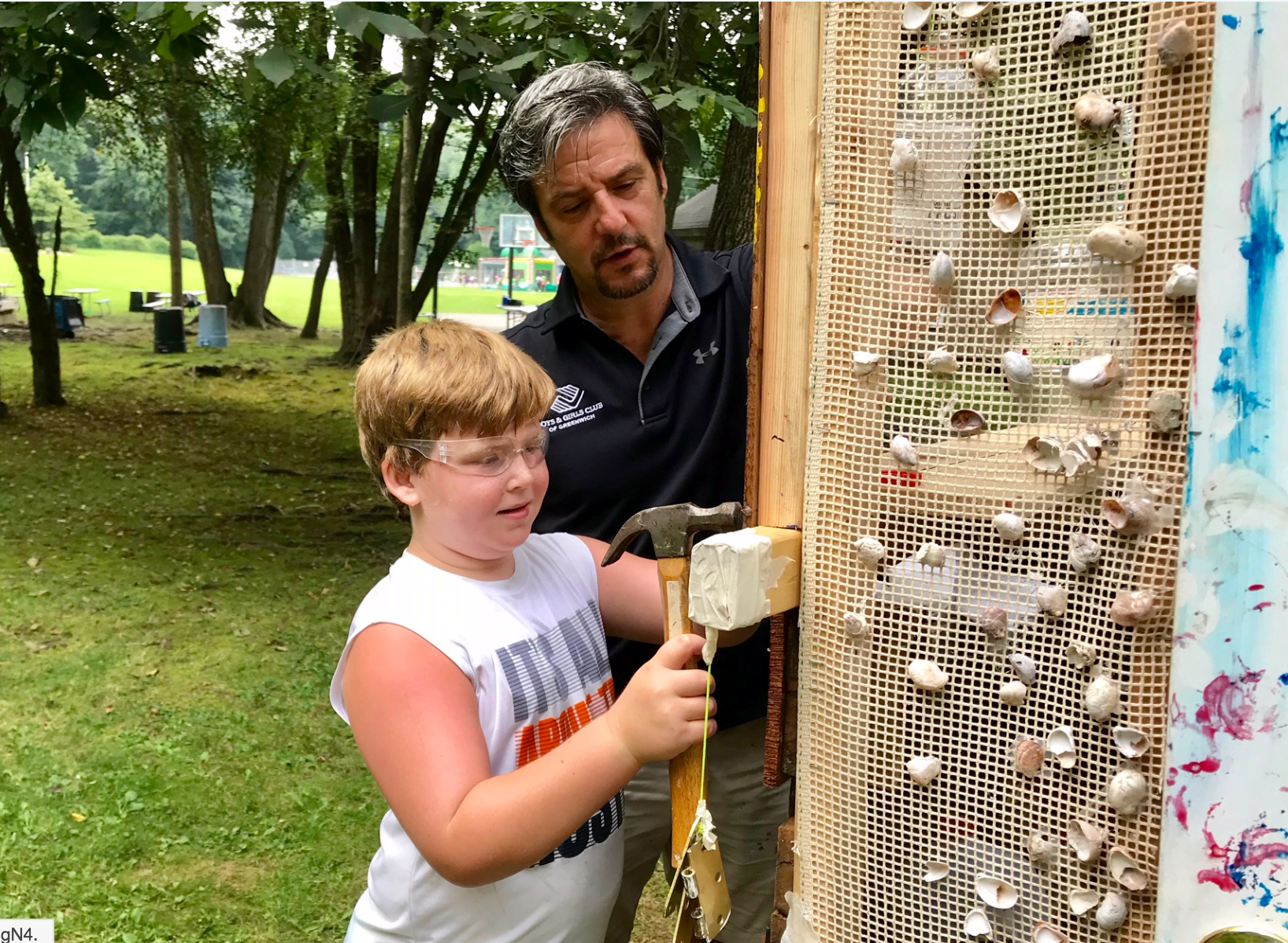 Early in July, Manning was offered over 300 cedar shingles from Interstate Lumber and Emilio Perez.

“It was one of the best finds of the year,” Manning said.

Right away he had an idea for the shingles, which came from a project he had done at Eastern Middle School during his first year teaching art there.

Manning, who looks for ways to get students engaged by in historical works of art, used the wooden shingles to create large scale panels that looked like tapestries.

The tapestries served as a way to start a dialogue with students about medieval art. Though the shingles were the size of an ordinary piece of paper, the students were excited to start painting.

New material – new outcome. And from this, “The House of Jack” was born.

The House of Jack is a reference to an Aretha Franklin song that Manning had been listening to as the project began to take shape. The project name took on special meaning when the multi-talented musician passed away just as the house neared completion.

So what can you do with 300 individual wooden painted panels? What everyone would do! You Build a house.

What started as a fun outdoor art activity that focused on individual creativity turned into something greater as each shingle became a connection to the group.

One of the goals of the project was to teach campers basic carpentry skills including how to use a hammer and a drill.

“It’s amazing how many kids, my own included, don’t get a chance to use these tools,” Manning said, adding that he was lucky to have been able to have free rein in his grandfather’s basement workshop when he was a boy.

“If there was something  to cut, bend or nail together, I did,” he said.  “I was just playing around, but through play I learned a lot.”

This is also an import part in Manning’s approach to teaching and getting kids fully involved in the creative process.

The House That Jack Built allowed the children to showcase their individual creativity while learning basic skills using a hammer and drill in a controlled supervised environment.

Since completion of the The House That Jack Built, the campers – Manning calls them artists – were determined to do more.

The idea is to give the young artists an opportunity to display their creative efforts  and continue the effort to help other kids.

They decided together to turn the structure into a lemonade stand and donate the money raised to children in need. This summer, the young artists raised $90 in just one day by selling lemonade for a 50¢ donation.

Last week The House That Jack Built traveled to Western Middle School, where $647.00 was raised between lemonade sales and Lemon pledges for the students.

Manning said the funds raised at WMS will go to the Sunshine Foundation in Steven Sudell’s name.

“The older I get, the more I look to the nature and kindness of kids as an example of how to live,” Manning said. 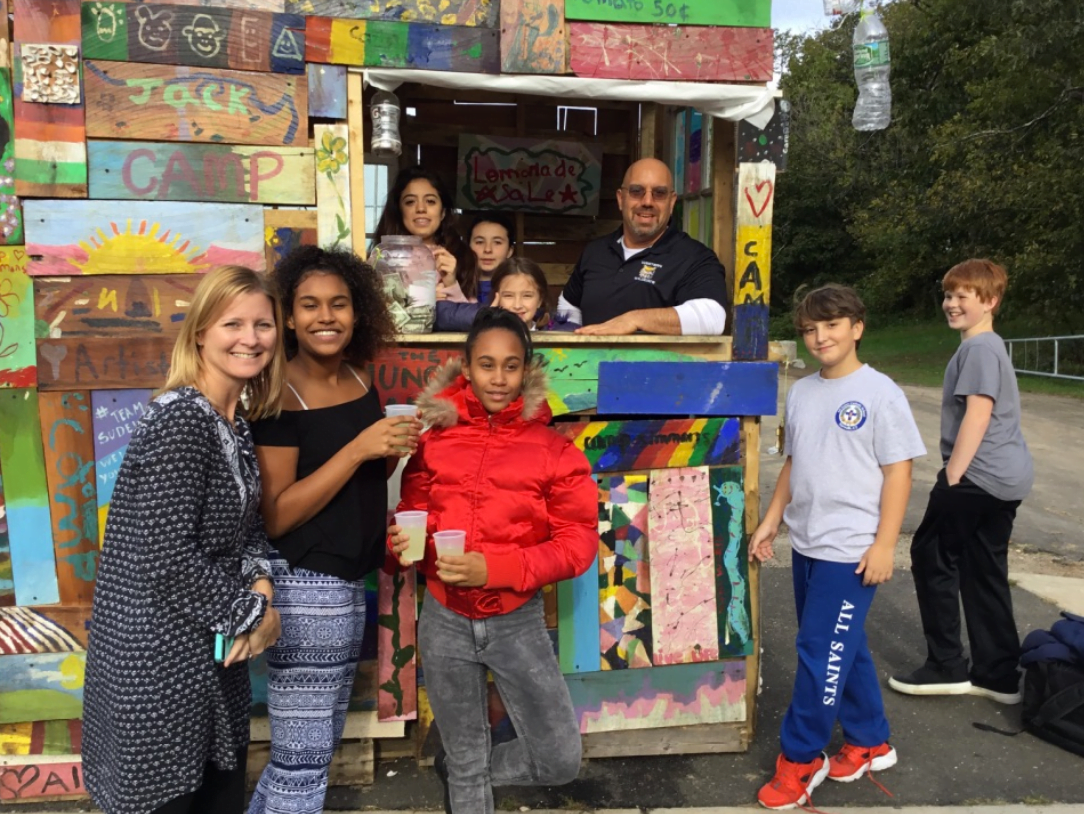 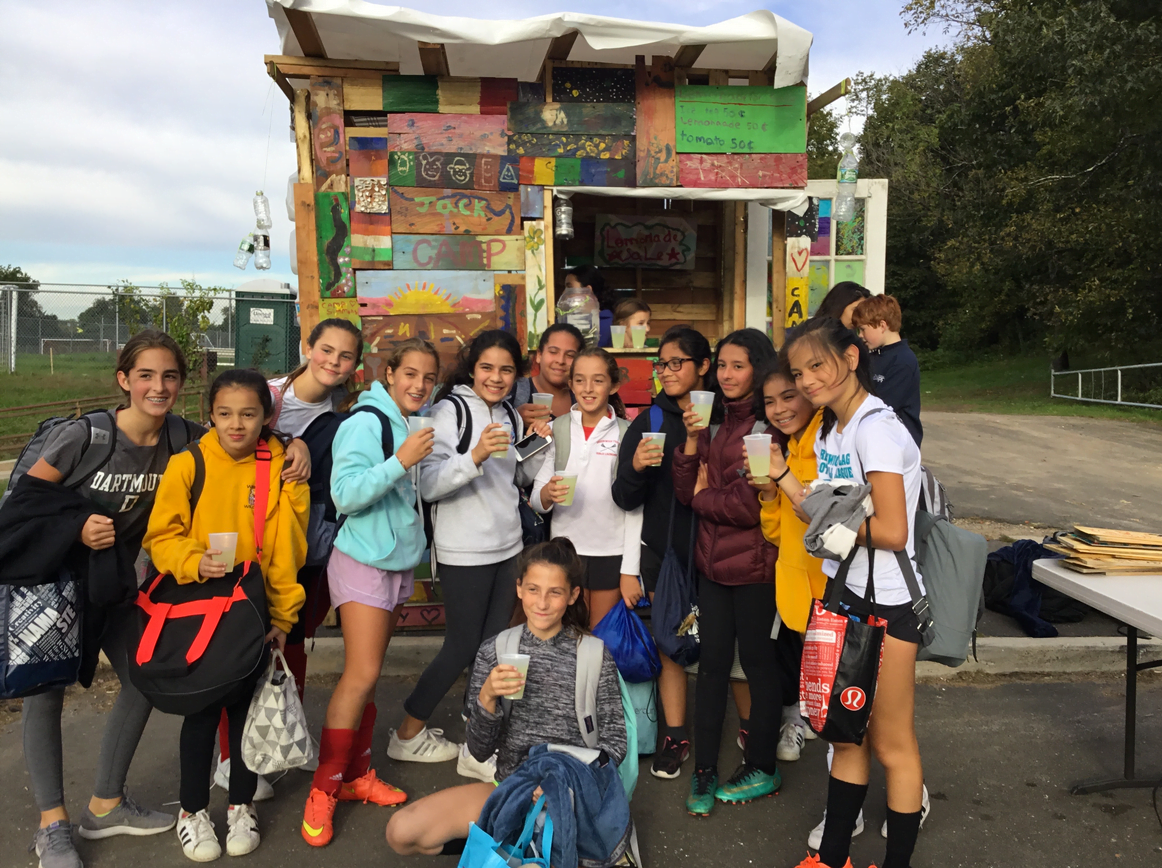 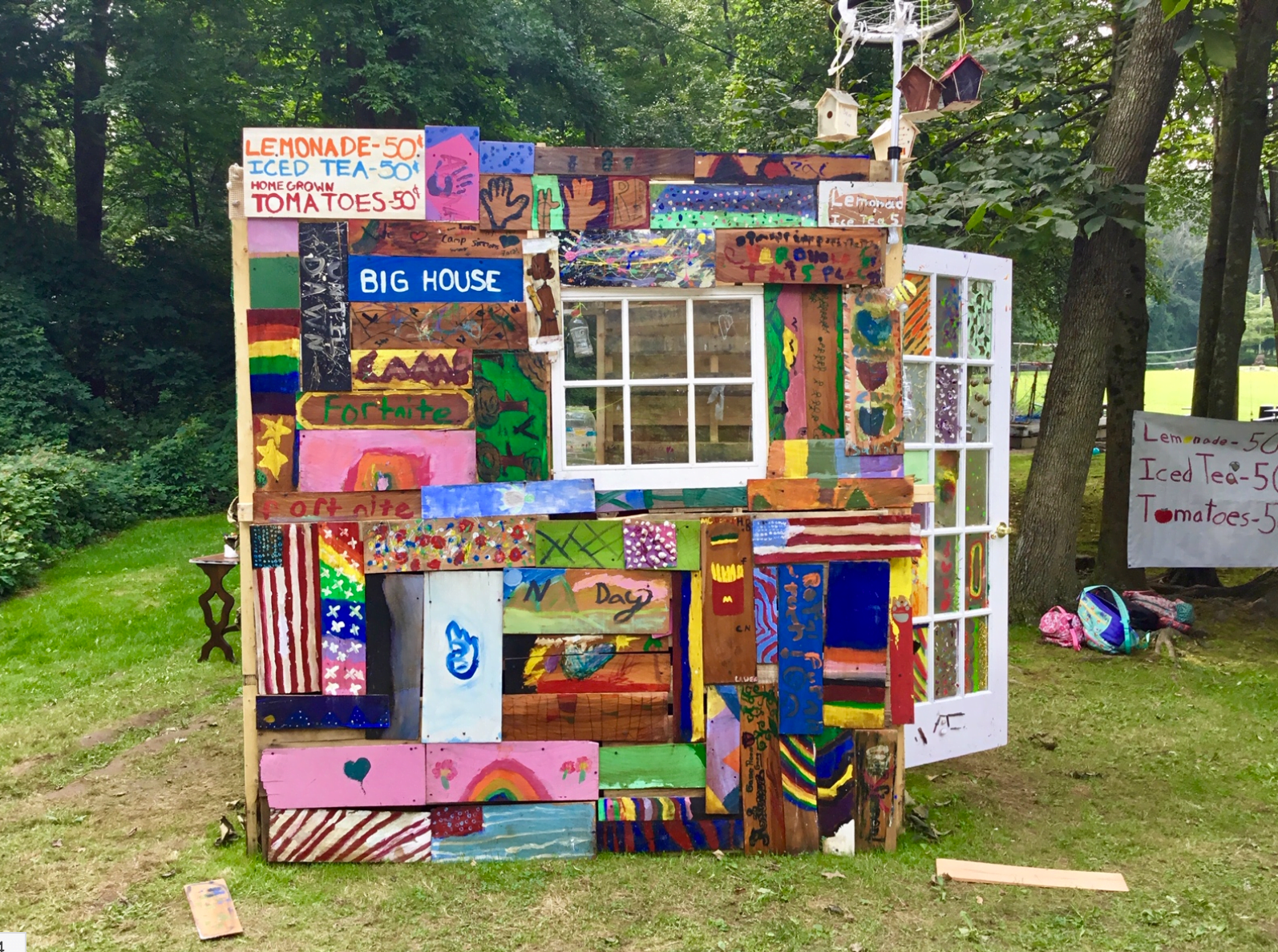 The House That Jack Built was constructed and painted at Camp Simmons. Contributed photo 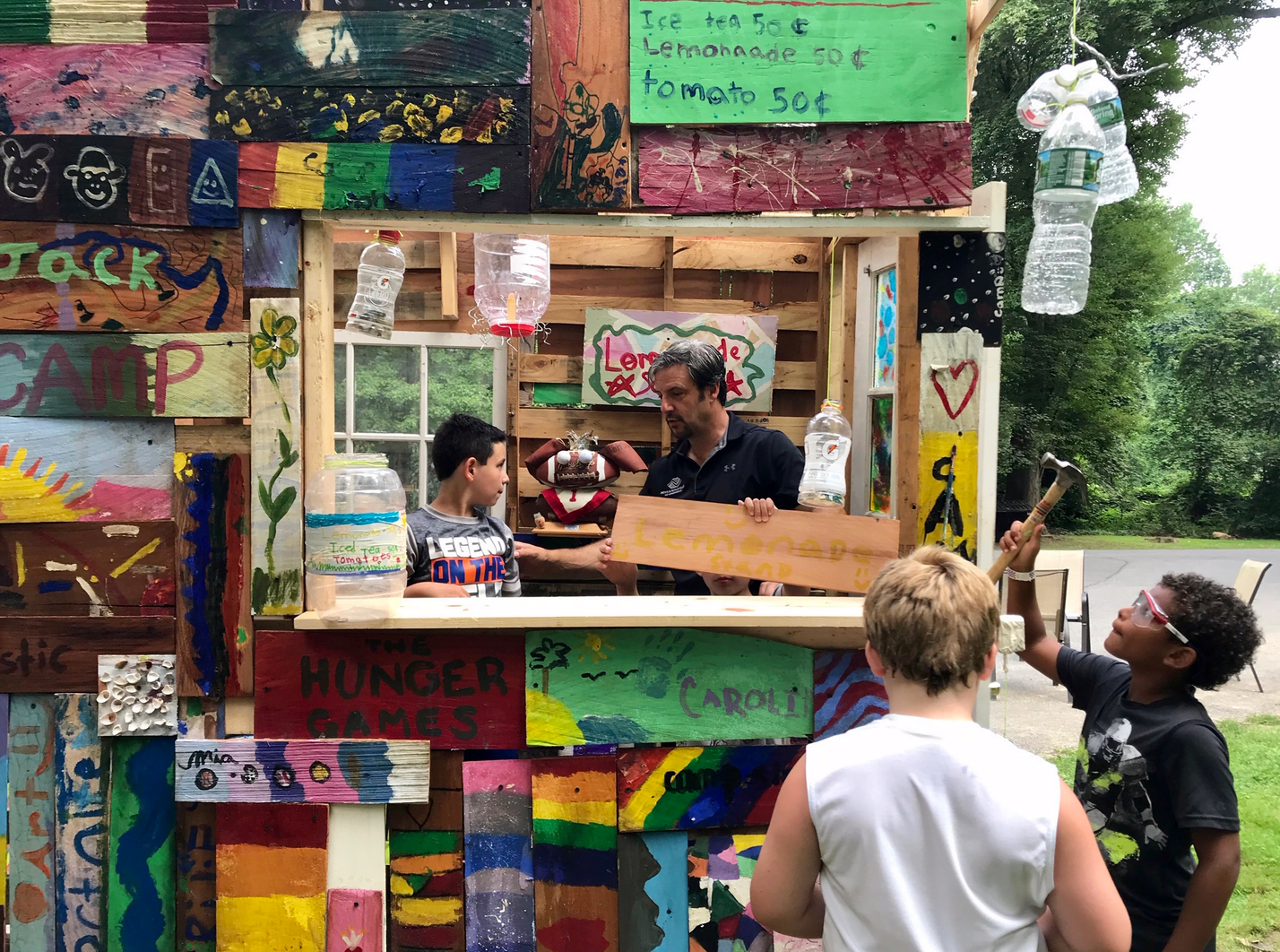