On Wednesday, Nov. 11, at 9:30am,  the annual “Community Walk” to honor veterans returns to Greenwich Ave. Meet at Greenwich Ave & Amogerone Crossway at 9:30. This event is all-inclusive, all family, warmly welcoming, festively patriotic expression of a Town’s gratitude to its military servicemen and women. More info on the Greenwich Military Covenant of Care Facebook page. 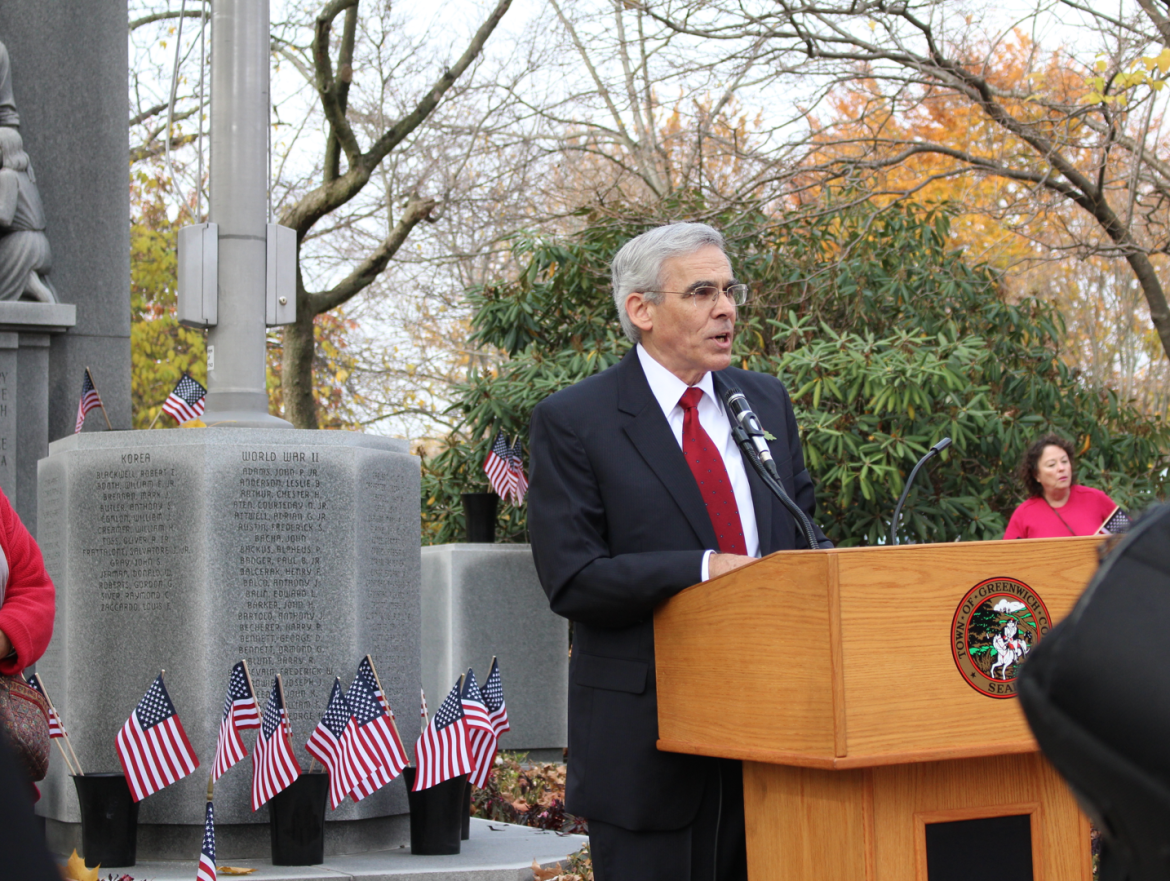 “There were no ticker tape parades, no bands playing,” Bruce Winningham said.

Winningham, who was a Lieutenant in the Navy, stationed the Atlantic and Pacific, overseeing men coming and going to Vietnam, described the war as unique.

“The smartest politicians in the country couldn’t come up with a strategy on how to win,” Winningham said. “They didn’t have a strategy for the war and everyone could sense it.”

But, Winningham pointed out, “Our servicemen and women did what they were asked to do.”

“There were extraordinary battles of courage and heroism – successful by military standards,” Winningham said. “But the stories weren’t told.”

Half way through the war, officers were instructed to explain the purpose of the fight to the troops.

“I was a young officer in the Navy. In 1971 I was directed by senior officers to speak to my division of men and explained that the strategy was containment. If we don’t stop them in Vietnam, they’ll occupy Thailand and Malaysia,” Winningham said.  “That principle, which succeeded with the Soviet Union, didn’t really apply to a civil war being fought in Asia on the containment border.”

And, Winningham said, “Those sent to Vietnam were never welcomed home.”

“After other wars, the country welcomed veterans home. That sentiment was repeated each Memorial Day and the 4th of July,” Winningham said. “But after Vietnam, they came home to a country in protest. The experience of returning was of disappointment. Vietnam guys are anonymous.” 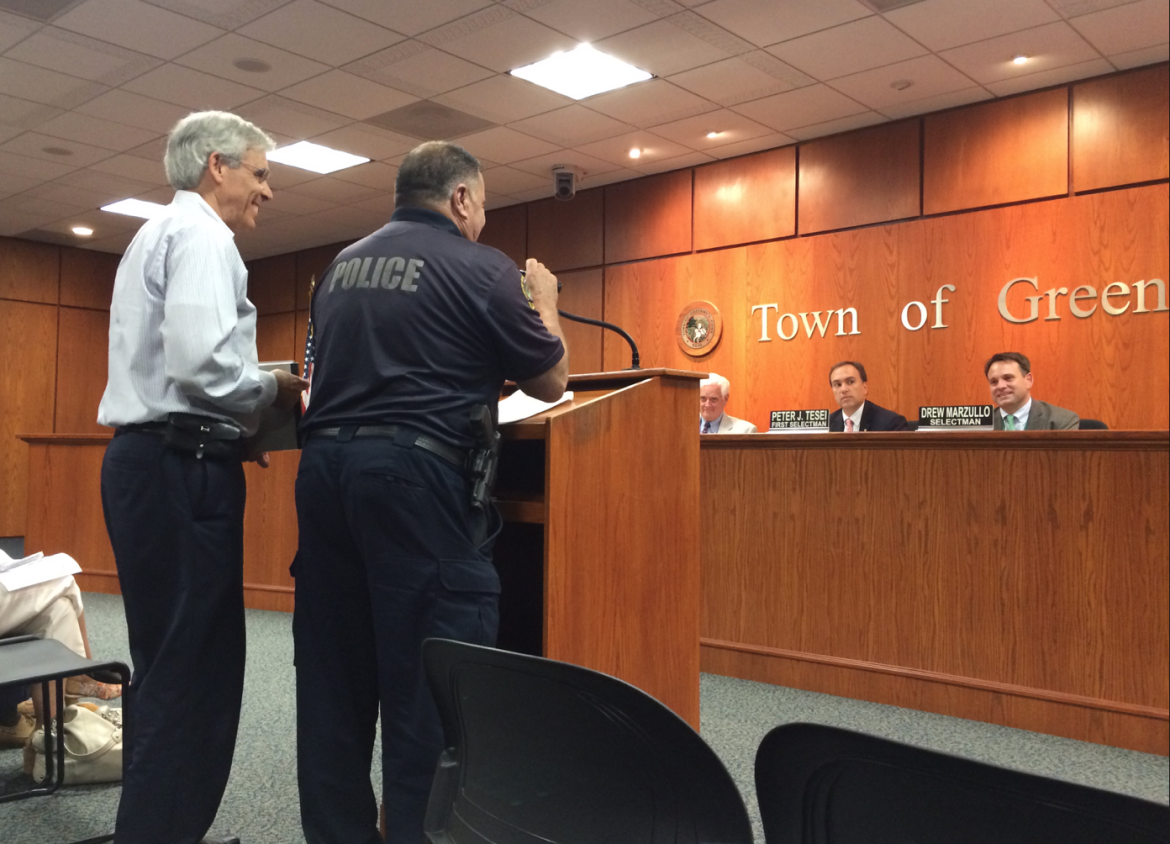 Bruce Winningham, of the Greenwich Military Covenant of Care and Tom Keegan of Greenwich Silver Shield Association had their request for a Nov. 11 Veterans Day road closure on Greenwich Ave approved by the Board of Selectmen. Credit: Leslie Yager

Back in July, Winningham, who is part of a group called the Greenwich Military Covenant of Care, and Lieutenant Tom Keegan of the Greenwich Police Silver Shield Association, had their Nov. 11 Veterans Day road closure request approved at the Selectmen meeting.

Winningham said there is much to do to prepare for the community walk down Greenwich Ave from Amogerone Crossway to the war monuments outside the Havemeyer building. 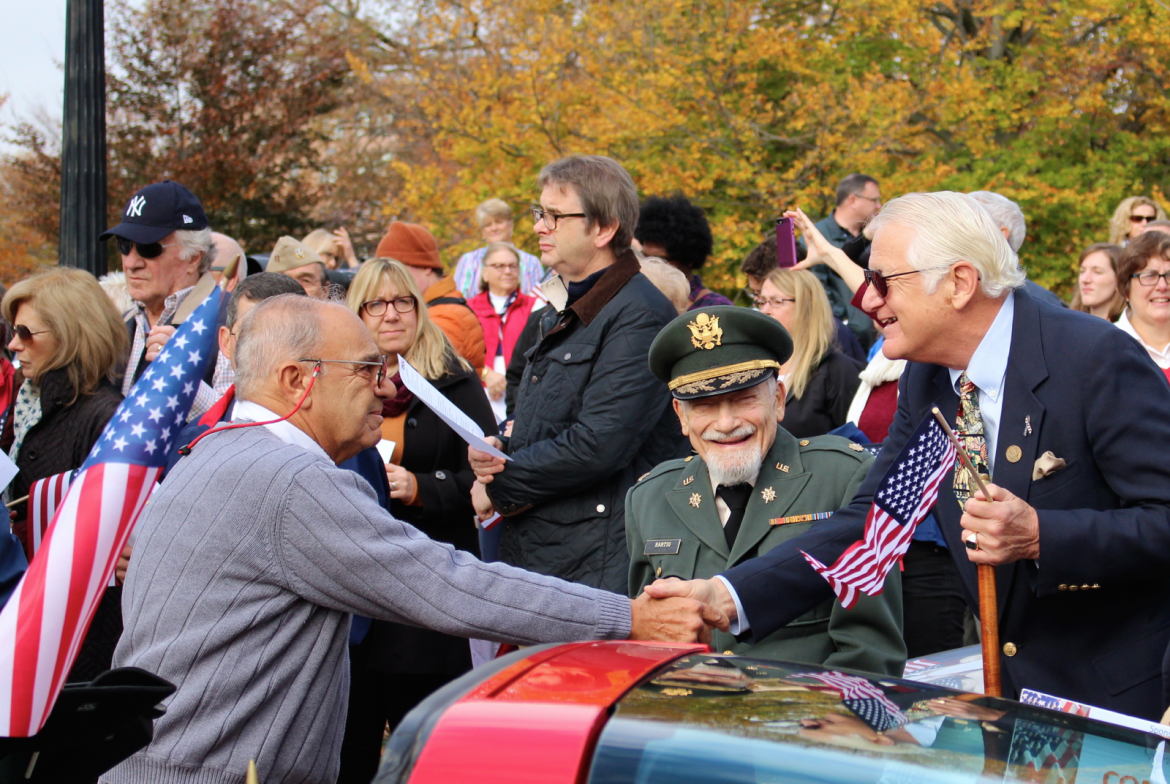 Last year, when the walk honored WWII veterans in particular, Winningham said it wasn’t hard to locate the men. The Malcolm Pray Foundation, along with Greenwich Cadillac and Chrysler Jeep, all provided cars so that the veterans, many in their 80s and 90s, had a stylish ride down Greenwich Ave while hundreds of members of the community walked alongside them.

“This is a different war and the experience will take on a different sensibility,” Winningham said.

“Everyone who answered the call is encouraged to come,” Winningham said. 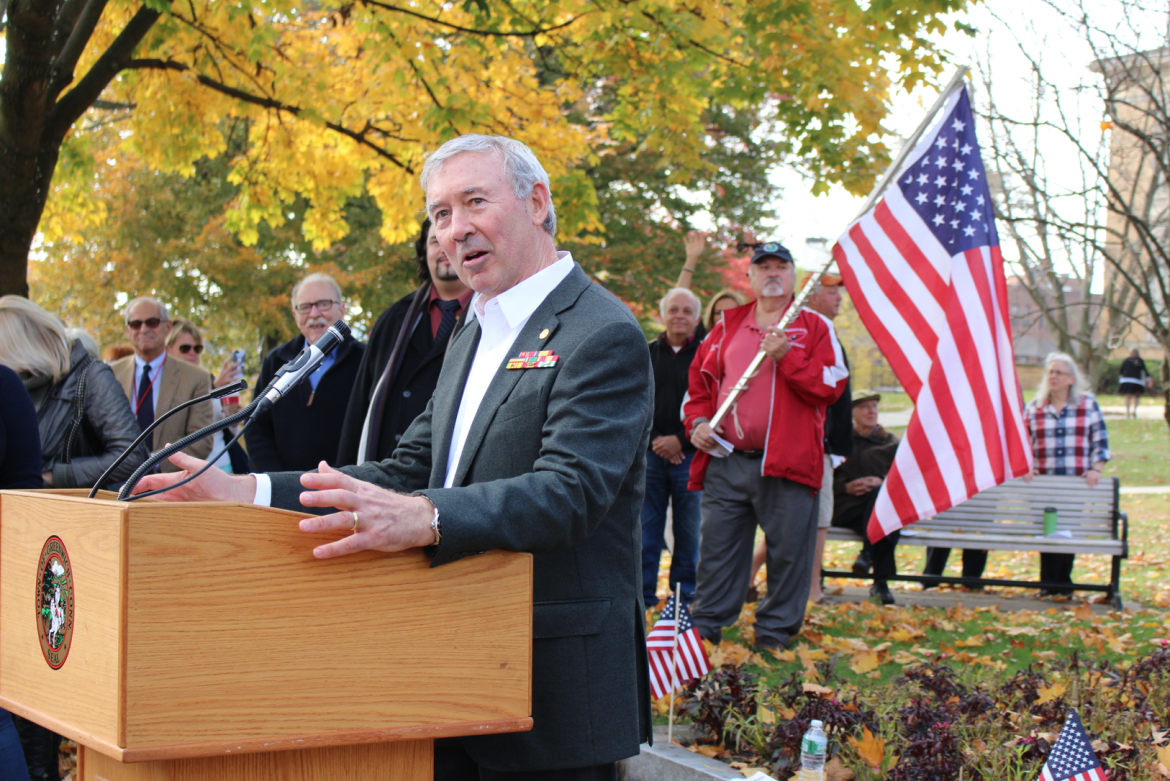 Ed Vick, a veteran of the Vietnam War, addressed the crowd in front of the war monument outside Havemeyer building on Veterans Day 2014. Credit: Leslie Yager

Winningham said that the theme of the event will have two elements.   “Welcome Home” is a concept that was the suggestion of Ed Vick, a decorated combat veteran of Vietnam. The other part of the theme is a community expression of recognition and gratitude – “We appreciate what you did.”  This was the suggestion of Kip Burgweger, Vice Chair of District 8 and Vice Chair Legislative Rules Committee, Greenwich Representative Town Meeting.

“Kip pointed out that there was a ten year span of time, 1965 to 1975, when our country was at war with North Vietnam.  However our citizens have virtually no understanding of what occurred during that long decade of war. There is no national knowledge of what our servicemen were asked to do or what they experienced and accomplished.” Winningham said.

“We want everyone who answered the call to please come to the community walk so that we can say, ‘Welcome Home. I appreciate what you did.'”

The Greenwich Military Covenant of Care was created in 2009 when Selectmen Lin Lavery, Peter Crumbine and Peter Tesei signed an agreement with the  US Army and American Legion. “The idea was that despite all that the military does for veterans, communities needed to be available to their military neighbors,” Winningham said, adding that the purpose is not to duplicate what the Government does, but to fill in the gaps.  The Greenwich Covenent became one of 800 covenant groups nationwide, of which just two are in Connecticut.

Back in 2009, the country was in the middle of the wars in Afghanistan and Iraq and the Covenant was able to bring families together to share information and companionship while their family members were deployed.

From its inception as a community resource for veterans and their families, the Greenwich Covenent has evolved.

Winningham credits Mary Jane Huffman, co-founder of the Greenwich Military Covenant of Care, for the idea for the community walk. Huffman, who is the daughter of a Naval officer, the sister of a Marine Officer who served in Vietnam and is married to an Air Force officer, envisioned a walk with families, including children, all carrying flags.

Winningham pointed out there are already many formal military ceremonies with iconic rituals that go back generations and should be preserved. “But, there is a new generation of citizens who have never seen a person in military uniform,” Winningham said. The walk was created to bring together generations, with flags everywhere, and keep the right balance of seriousness and festive, cheerful gladness.

Of Huffman’s idea, Winningham said, “We had the support of the Town, including the Board of Selectmen, Chief Heavey who is a veteran of Desert Storm, Fire Chief Siecienski, and Greenwich Schools Superintendent McKersie,” Winningham said. “Everyone agreed it was a good idea.” 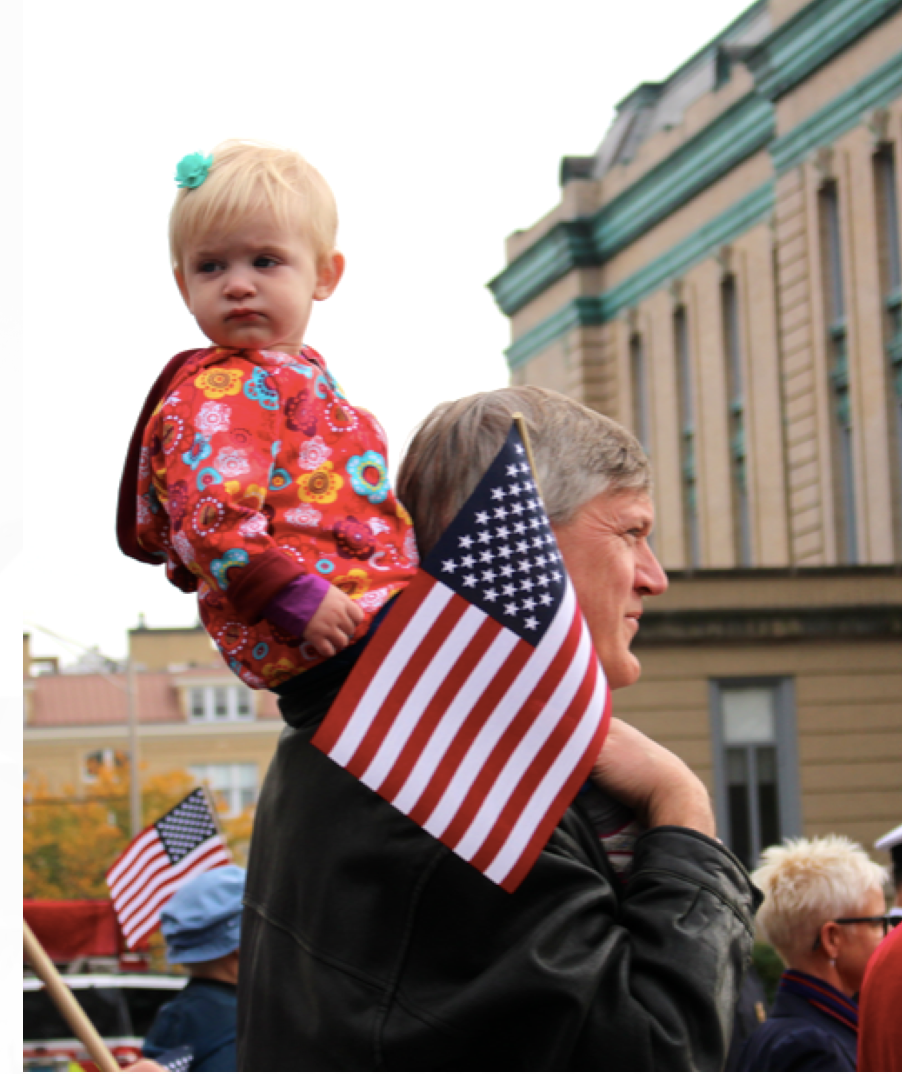 Winningham said that over 500 people showed up for the first community walk in 2013. “We didn’t do a head count, but we had 500 flags and at the end of the day the box of flags was empty,” he said. “All for an event that never happened before. Schools were not in session and the turnout was multi-generational, including many families and sons in uniform from Afghanistan and Iraq.”

“We got to the bottom of the hill at the war memorial and realized the size of the crowd,” Winningham said. “I had no microphone, just a megaphone with which to introduce the town’s combat veterans.”

After the walk, Greenwich Police suggested that the following year Winningham get a podium and microphone.

“Chief Heavey said you’ve created something that has to continue,” Winningham said. “We honored Iraq and Afghanistan veterans and then World War II  Veterans,” but, he said, “We skipped over Vietnam. We want to find those veterans in advance.”

Winningham said it was easy to find the World War II veterans. “I found them in a month. They all said, ‘Sure, tell me where and when, and I’ll be there.'” He hopes Vietnam veterans won’t be reluctant to come to the walk.