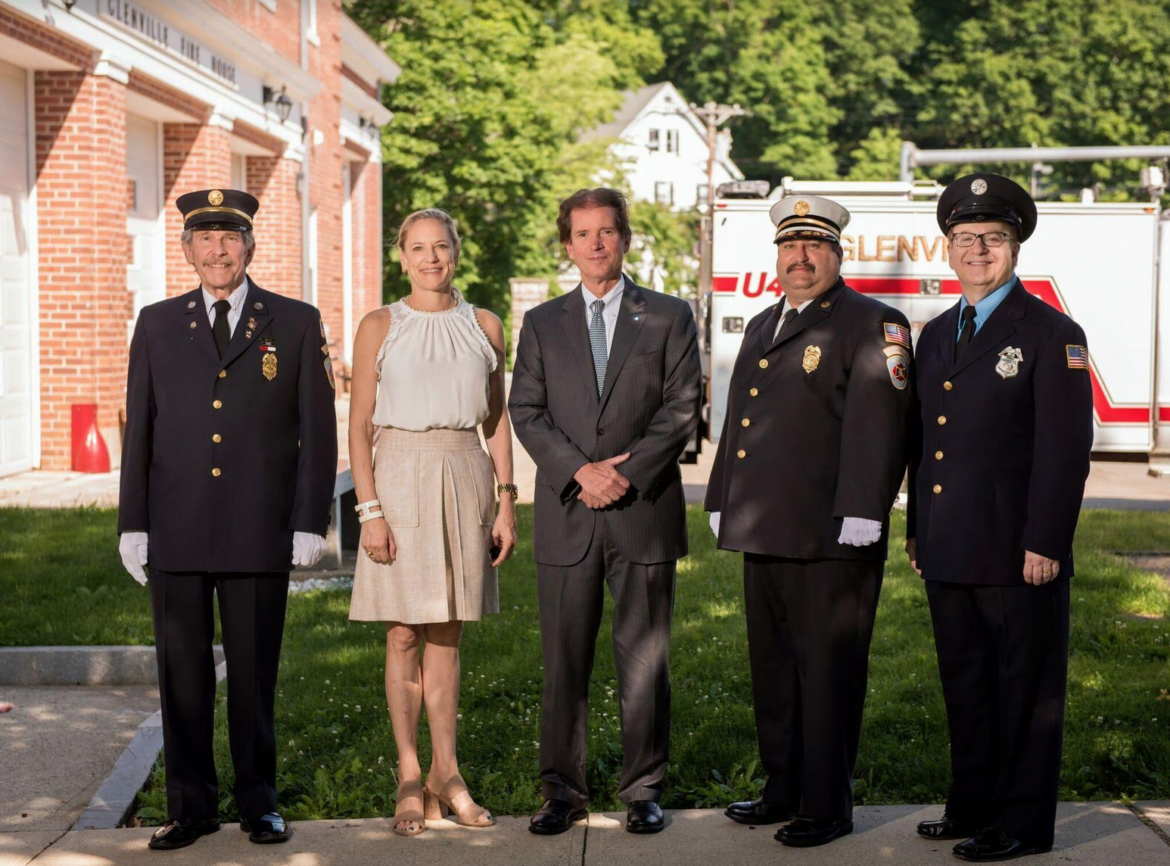 The Glenville Volunteer Fire Company announced that the Hon. Scott and Icy Frantz, will be presented with the David N. Theis Award at the Fire Company’s 3 rd Annual Awards Cocktail Reception on October 12, 2017, at Tamarack Country Club.

Proceeds from this year’s event will benefit the Glenville Volunteer Fire Company.

The David N. Theis Award for Outstanding Service to the Community is presented to deserving individuals from Greenwich who selflessly and compassionately serves our residents, organizations, and institutions in an admirable and tireless manner. “As social, political and philanthropic leaders in Greenwich, Scott and Icy Frantz have come to embody the essence of a caring community,” said Sandy Kornberg, Glenville Volunteer Fire Company President.

Senator Frantz is in his 5 th term in the General Assembly, where he represents the 36th Senatorial District, which includes Greenwich, New Canaan and Stamford. Scott and Icy each serve on the boards of many institutions and non-profits including Greenwich Country Day School, Arch Street Teen Center and the Taft School.

According to the Scott and Icy Frantz, the award is particularly meaningful because it is named in honor of the late former Selectman Dave Theis.

“Dave Theis was a pillar of the community. He had a huge heart, and gave so much back to the community,” said Scott Frantz. “The award also means the world to us because it is from a local, all-volunteer Fire Company which has served Icy and I and my family for decades. We are humbled and honored to be recognized in this way.”

The Glenville Volunteer Fire Company’s vision is, through its extensive experience and professionalism as Firefighters and First Responders, to ensure its ongoing commitment to fire and life-safety for all Greenwich citizens. Volunteers do their utmost to act responsibly and professionally in dedicating themselves to the preservation, protection, and well-being of the health, property, and safety of you and your family.

The Co-Chairs and Committee are planning a special evening celebrating Scott and Icy’s extraordinary contributions to the community. The cocktail reception will feature a silent and live auction, and Greenwich Police Chief Jim Heavey, and a past President at Glenville, will serve as Master-of- Ceremonies.

Ticket and Sponsorship opportunities are available at various levels for this event. For more information, please call 203-532- 9606 or email rsvp@glenvillefire.org. Additional information can also be found on Glenville Volunteer Fire Company’s website: www.glenvillefire.org